Out of this world! She was married to a Rolling Stone and enjoyed the rock ‘n’ roll, but Jo Wood is far happier on this eco retreat in the Indian Ocean

Some parts of the earth are so remote that you almost believe you are the first person ever to set foot on them.

That’s what I felt when I arrived on the tiny, uninhabited island of Cosmoledo in the Seychelles.

It looked like virgin territory: each grain of sand pristine, each palm frond immaculate. Of course, I wasn’t the first to explore this atoll 1,000 miles off the coast of Africa — more than a few sailors and fishermen got there before me — but I am certainly among the initial tourists to discover this particular corner of the world. 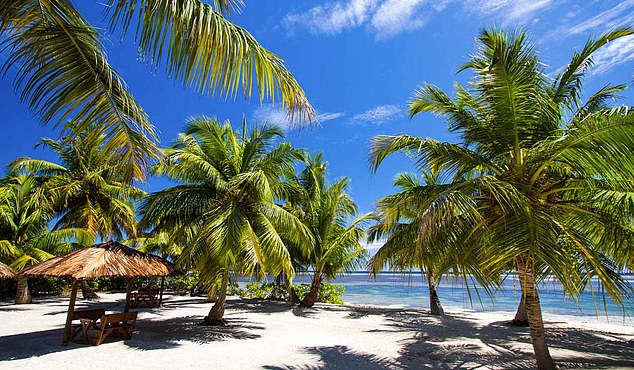 Yes, it’s quite a trek. Leave London on a Saturday morning and it’s Monday evening before you’re tucked up on Cosmoledo. That’s after a stopover in Doha, in Qatar, and another on the island of Mahe, the largest landmass in the Seychelles archipelago and home to the capital, Victoria.

Exploration of the Seychelles — a chain of 115 islands spread across hundreds of miles of Indian Ocean — is possible only by small plane (just as long as the islands have landing strips) or boat. And if you think Mahe is a remote speck in the ocean, you are in for a shock. Cosmoledo, our final destination, was still another 600 miles further south-west.

I had been lured to the Seychelles by the promise of unspoiled nature. While the (relatively) nearby larger islands of Alphonse and Astove already welcome visitors, Cosmoledo, just seven miles long by ten wide, opened only late last year.

On these remote atolls, formed of coral, there would be no television, no telephone, limited internet, only the thump of the pounding surf on the white sand and the call of the magnificent frigatebirds soaring above.

Along the way we hoped to see giant tortoises and rare hawksbill turtles. With such abundant wildlife, it’s no wonder the Seychelles is often referred to as the Galapagos of the Indian Ocean.

I’m a huge fan of Sir David Attenborough and all he has done in raising our awareness of our beautiful and fragile world.

So, to wake up that first morning in a converted plantation house on Astove, before jumping on a small boat for the 90-minute journey to Cosmoledo, was pure joy.

I watched as the sun turned the sea from cobalt to hues of turquoise. That was my Blue Planet moment.

When it comes to islands, I have history. I spent four weeks marooned with nine others on an islet off the coast of Panama during the filming of Channel 4’s Celebrity Island last year. 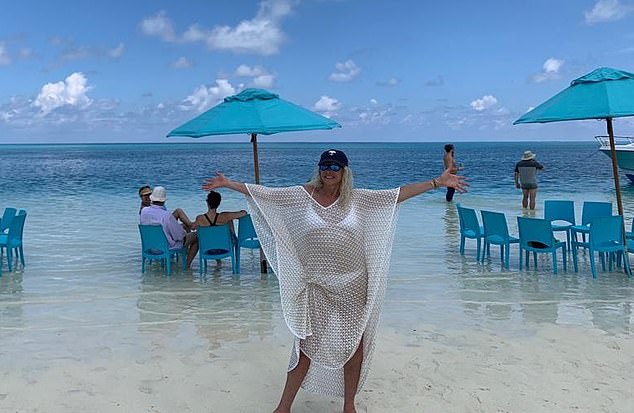 Relaxed: The former model enjoying the beach on Cosmoledo in the Seychelles

As tough as it was to find food and shelter, it was one of the happiest times of my life.

Our group, which included the rower James Cracknell and the actor Martin Kemp, had been given only three days of survival training before being dumped on the island by Bear Grylls.

I remember being the first one to catch a fish, which was cause for celebration. I learned a lot about myself during those weeks. It taught me that I am comfortable with nature — and happy spending time alone.

It’s important to love your own company before you can love anyone else. This appreciation of solitude has come late in life. It wasn’t always like that. I was married to Ronnie Wood, of the Rolling Stones, and we spent years touring the world, living in hotels.

We were together for 31 years and had two children together before splitting in 2008. But, as it turned out, the best thing that ever happened to me was becoming single. Now I’m in control of my life. When you are on tour, others control you.

Of course, my island odyssey was nothing like being on that reality show. For a start, I didn’t have to kill to eat, and I wasn’t fighting for survival among a group of strangers. This time, I had a travel buddy, my son Tyrone. He’s 36 and shares my passion for the environment.

He is managing director of the charity Project Zero, which promotes ocean conservation. 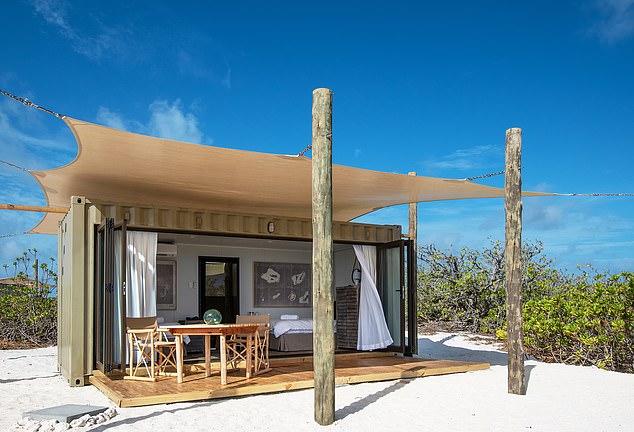 Plush: One of the eco pods at Cosmeldo Eco Camp, which has windows, air conditioning and proper plumbing

Like all of us, he’s appalled by the amount of plastic in the ocean, so he raises awareness through global events and is working on conserving and protecting 30 per cent of the oceans worldwide by 2030.

So, happiness for me was spending hours snorkelling with Tyrone among the coral reefs and marvelling at the brilliance of the exotic fish. But I drew the line at scuba-diving.

I remember my children learned as teenagers when on a trip to Hawaii, and I was keen to try it with them.

But when I was told that I would have to take my mask off underwater, clean it and then put it back, that was it — much too scary. That fear meant that here in Astove I couldn’t tackle one of the most famous diving sites in the world.

This whole area was made famous by the underwater explorer Jacques Cousteau, so when Tyrone came back and told me all about the rare turtles he had seen, I must admit I was a little envious.

No wonder the Seychelles government is keen to promote eco-tourism. Fishing, for example, is heavily regulated and you throw back what you catch.

Since the government has outlawed any permanent structures, everything must be easily dismantled. That emphasis on conservation is why, on Cosmoledo, I found myself sleeping in a converted shipping container; These were plush eco-pods with windows, air conditioning and proper plumbing. 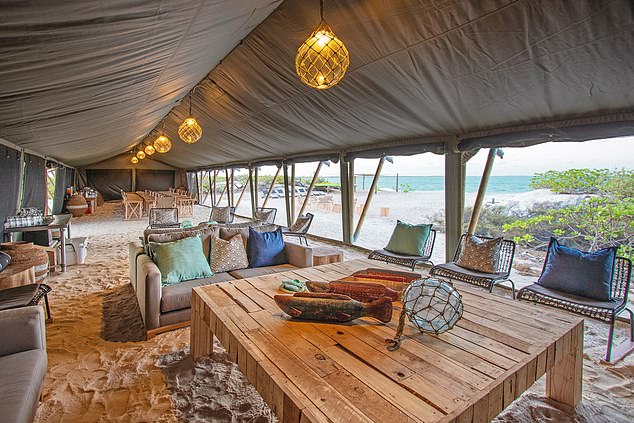 Serenity: Cosmeldo Eco Camp has eight eco-pods on the island

We were here to see nature in the raw — and that’s what we did.

With only eight eco-pods on the island and a handful of staff, we were a group of 20. And, with no one else around, the lagoons and reefs were ours to explore.

As well as cooks and crew, there was a marine conservationist to answer our questions and take us on guided walks.

It’s one thing to watch a frigatebird try to land; it’s quite another when Lucy, our expert, explained how their giant claws make it almost impossible for them to alight on sea or ground.

I couldn’t believe what food was magicked up by the cooks, a husband-and-wife team, in their tented kitchen. Delicious tuna sashimi, seaweed salads and creamy coconut desserts.

It’s easy to get into a peaceful rhythm in a place as enchanting as Cosmoledo. Let’s be clear, there’s nothing rock’n’roll going on here.

It’s more an improving book kind of place and lights out after supper.

So, if you’re not passionate about barracudas and giant trevally, masked boobies and sooty terns, there’s little diversion.

There’s much that will draw me back to these islands. I would like to return with my children and grandchildren.

I want them to see a turtle crawl out of the water to lay its eggs on the beach. And to swim with a manta ray. To spot dolphins and whales. To fish for wahoo and snapper and, most importantly, throw them back.

I want them to enjoy every minute, as I did, of my glorious Marine Safari.

Jo Wood was a guest of Original Diving (originaldiving.com, 020 3911 0428) offers one night B&B in Eden Bleu, four nights’ full board in Cosmoledo (bluesafari.com) and two nights’ full board at Alphonse Island from £10,950 pp. Including flights with Qatar Airways, transfers, ten dives, and meals. More info at seychelles.travel/en.

Learn to cook from a master at Moana Surfrider

Emirates airline to resume services to Stockhom in August