From the 175ft tower with its own lift to a spiky landmark with an exotic flavour: 15 fabulous jolly follies (for the ultimate mini break!)

The UK has plenty of weird and wonderful architectural follies – from a pineapple-shaped landmark to a mini castle with its own library.

But while these buildings are often thought to have been constructed entirely for decoration, you can in fact spend the night inside some of them.

Scroll down for our pick of the 15 best examples.

1. The full braveheart – turrets and all 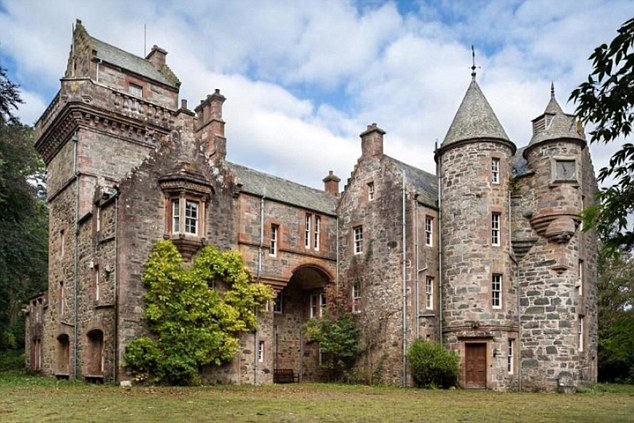 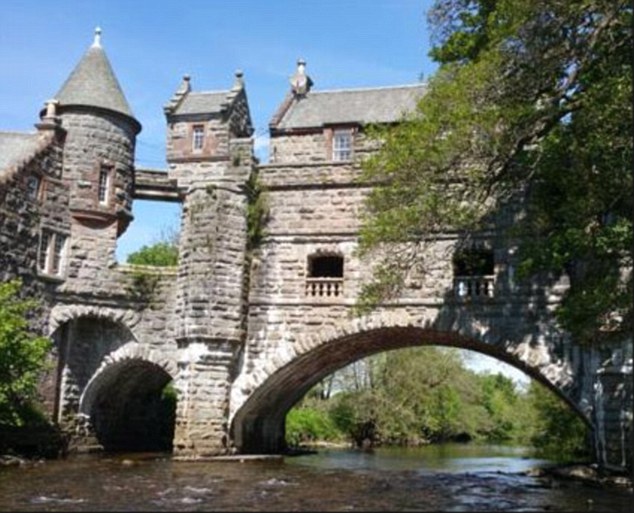 A castle-like building that straddles the River Ardle, just seven miles from Blairgowrie, Blackcraig Bridgehouse in Perthshire does the full Braveheart with battlements, turrets and winding staircases.

It’s not as ancient as it looks though – the bridge was built in the 1800s as a whimsy. Inside it’s a cosy cottage for two and there’s plenty of modern charm too, including a sauna. 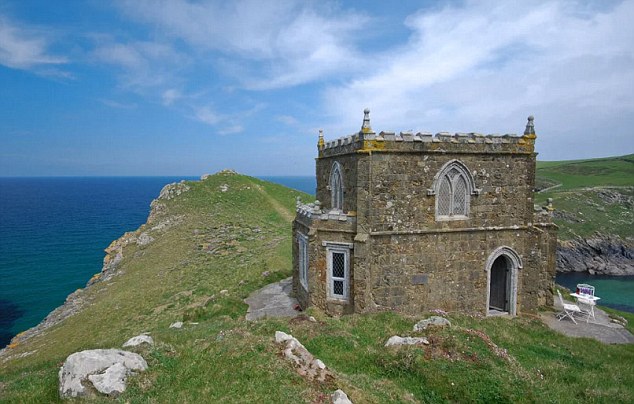 Samuel Symons, an infamous Cornish bon viveur, built the cliffside Doyden Castle in the 1830s so he could entertain his friends. Overlooking Port Quin on the South West Coast Path in Cornwall, it plays hosts to an eccentric one-bedroom holiday home full of quirks from its past. Inside you’ll find arched gothic windows and a cosy open fire.

3. Inspiring… the 175ft tower with its own lift 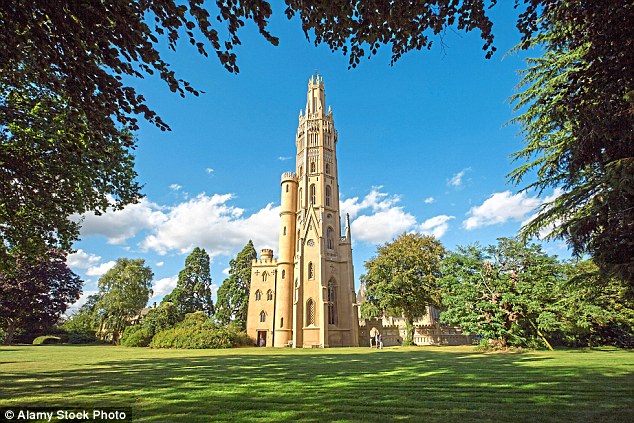 Height of sophistication: Hadlow Tower in Kent has a vast Gothic Revival spire

Built by an 18th Century industrialist to spy on his wife or show off his wealth (depending on which legend you believe), Hadlow Tower has a vast Gothic Revival spire. The Kent castle it was attached to has been demolished, but the tower was restored in 2013 and has three bedrooms, two spiral staircases and a lift – handy since the building is 175ft tall. 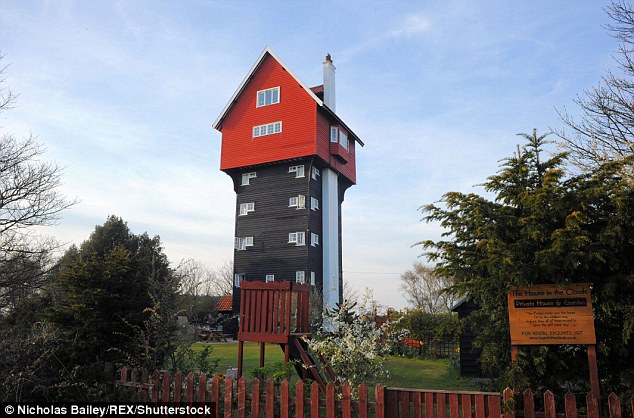 Up in the clouds: Thorpeness was built in the 1920s as a holiday village and this tower provided water to the homes

Thorpeness was built in the 1920s as a holiday village and this tower provided water to the homes. Now it’s a lofty Suffolk holiday rental called House In The Clouds. There are five bedrooms and three bathrooms, a dining room and sitting room – but also a huge galleried room at the top with billiards table as well as views out to sea and along the coast to Aldeburgh and Southwold.

5. Romantic refuge in the Yorkshire dales 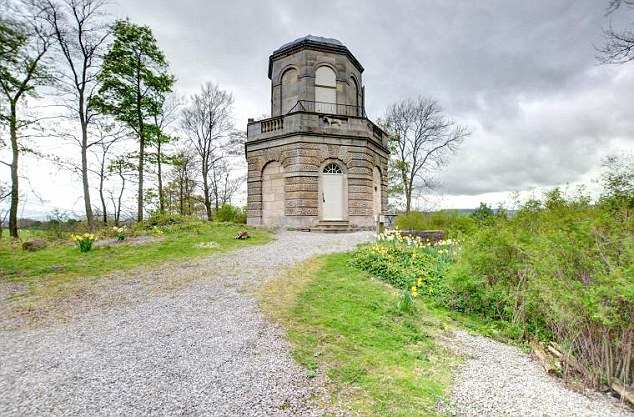 A tiny octagonal building in the Yorkshire Dales near Aysgarth, Temple Folly was built so ladies could admire the view. It’s now a romantic refuge for a couple, with a wood-burning stove plus a balcony.

From £486 for seven nights with Yorkshire Holiday Cottages (yorkshireholidaycottages.co.uk)

6. Beach life in the Channel Islands 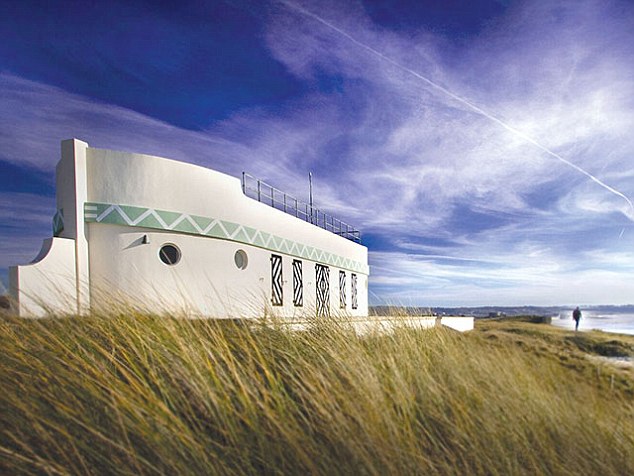 This 1930s folly on Jersey – called Barge Aground – is not cheap, but as well as period charm, you’re paying for direct access to the sandy beach of St Ouen’s Bay. With polished wood and portholes, there are two bedrooms (one with cabin-style bunk beds) and a large area on the top deck for al fresco meals.

7. The very best of capability brown 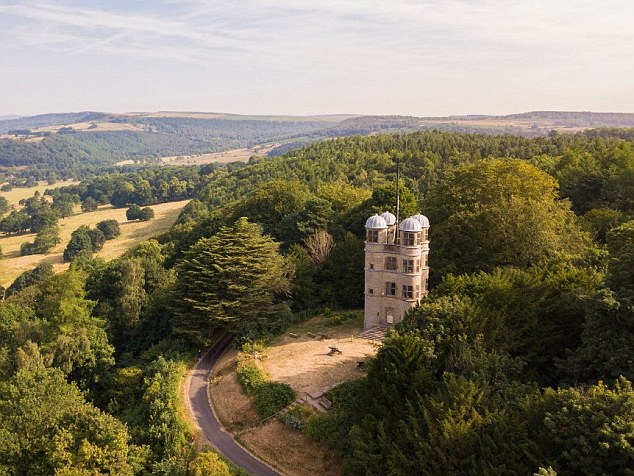 Miniature palace: The Hunting Tower sleeps four and has a stone spiral staircase

Part of Derbyshire’s Chatsworth Estate, the Hunting Tower is a miniature palace sleeping four with a stone spiral staircase and a four-poster bed, decorated in high Victorian style. Built in 1582 so women could watch their menfolk hunt, it’s surrounded by some of Capability Brown’s finest landscaping.

8. Spiky landmark with an exotic flavour 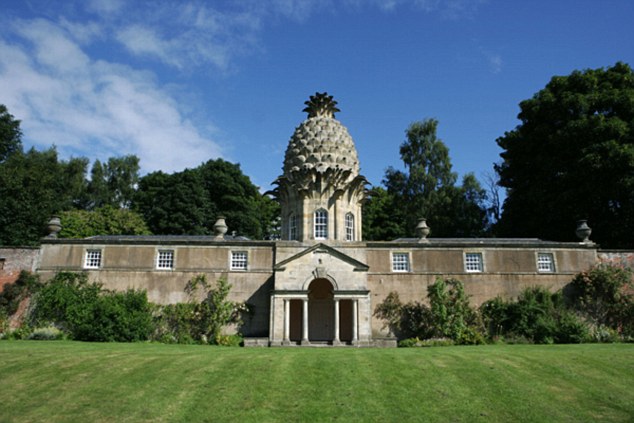 Sharp twist: The Pineapple near Falkirk was built in 1582 so women could watch their menfolk hunt

In the 18th Century, sailors in the US would leave a pineapple outside their homes to announce their return. The Earl of Dunmore did some aristocratic one-upmanship when he came back to Scotland from a stint as the Governor of Virginia, by creating The Pineapple, complete with spiky ‘leaves’. Sleeping four and tastefully fitted out with antiques, this building near Falkirk was restored by the Landmark Trust. 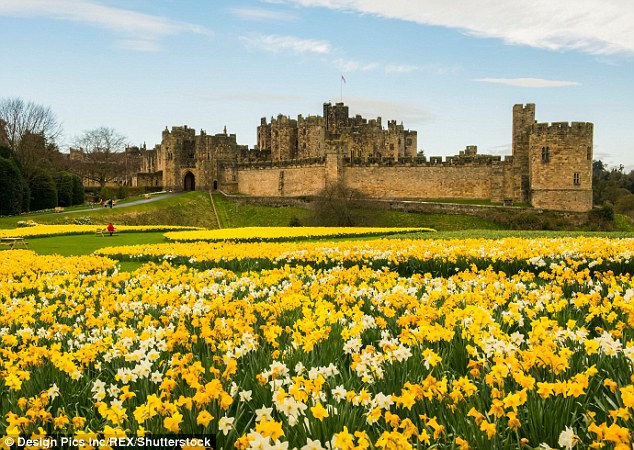 Return to Hogwarts: Northumberland’s Alnwick gets a stream of Harry Potter fans location-spotting 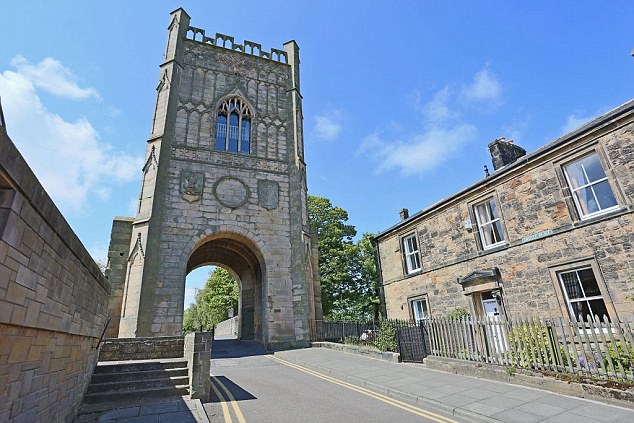 You can get a real taste of the magic by renting Pottegate Tower, a galleried one-bedroom holiday let in the centre of Alnwick

Northumberland’s Alnwick gets a stream of Harry Potter fans location-spotting (Alnwick Castle was used as Hogwarts) but you can get a real taste by renting Pottergate Tower, a galleried one-bedroom holiday let.

Built on medieval foundations in 1768 in the centre of Alnwick town, it blends luxurious modern furnishings with its ancient stone walls.

10. A taste of the good life in the Orangery 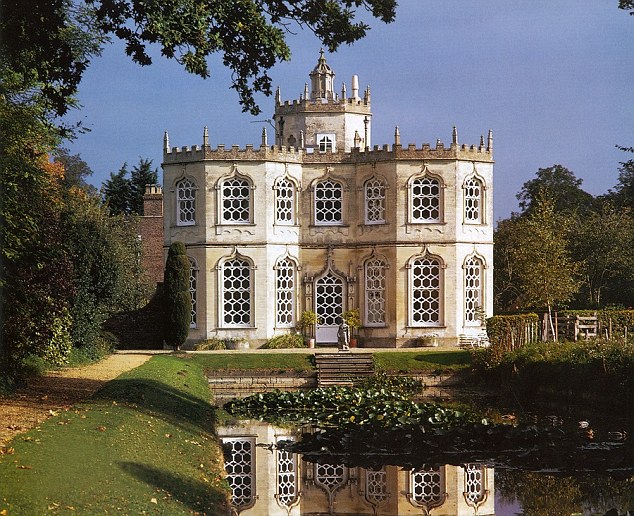 Gothic style: Mullioned windows of the Gothic Orangery in Gloucestershire look out on the banks of the River Severn as well as the stunning estate

Behind its mullioned windows, the 19th Century Gothic Orangery in Gloucestershire has been converted into a light-filled holiday let with turrets. Sleeping eight, it’s stylish, with antiques alongside modern gadgetry. The bedrooms look out across the Frampton Court estate on the banks of the River Severn. 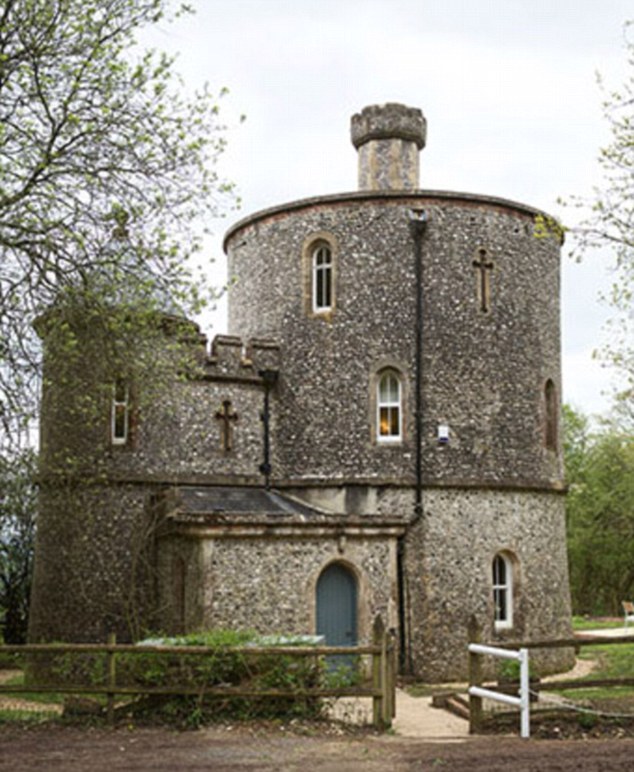 Simple delight: Grotto Lodge, built in the 1840s to amuse the Earl of Carnarvon’s guests

Highclere Castle has become famous as the filming location of Downton Abbey, but viewers haven’t seen this tiny house, Grotto Lodge, built in the 1840s to amuse the Earl of Carnarvon’s guests. It’s got superb views – on a good day you should be able to see across Hampshire and Berkshire. It sleeps two and has a wood-burning stove and a private garden.

12. A ruin on the outside, all mod cons inside 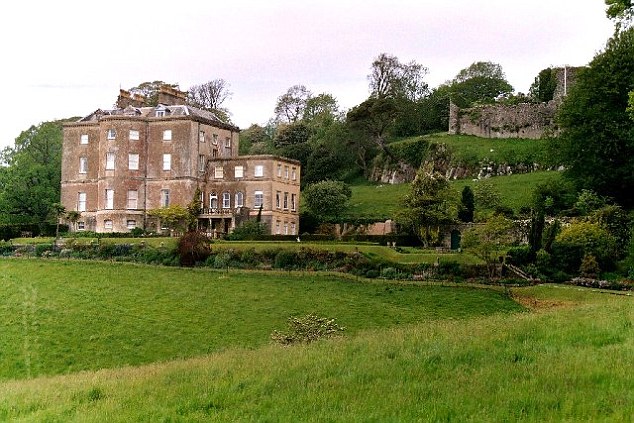 Artful disguise: This one-bedroom folly is near the Gower Peninsula coastline in Swansea

Artfully built to look like a ruin, this one-bedroom folly is part of the family-owned Penrice estate. Built in the 1790s, it’s a lot more up-to-date inside, with a fitted kitchen and smart furnishings. There’s the nearby coastline of the Gower Peninsula to explore and Swansea is 20 minutes away. 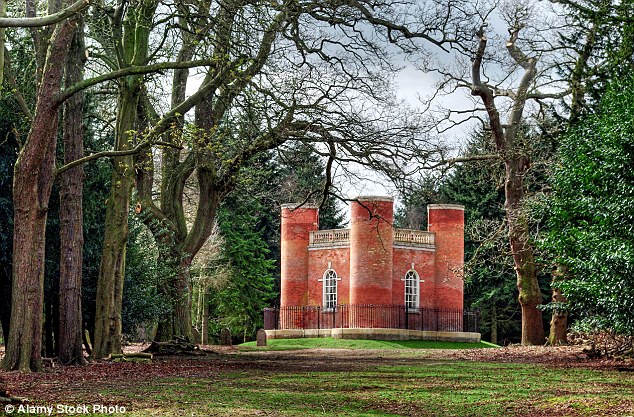 Queen Anne’s Summerhouse in Bedfordshire, a square-shaped folly that sleeps two, sits in a clearing in the middle of beautiful woodland. Dating back to the early 18th Century, it features an underground bathroom accessed via a staircase while another leads up to the roof terrace.

14. A mini castle with its own library 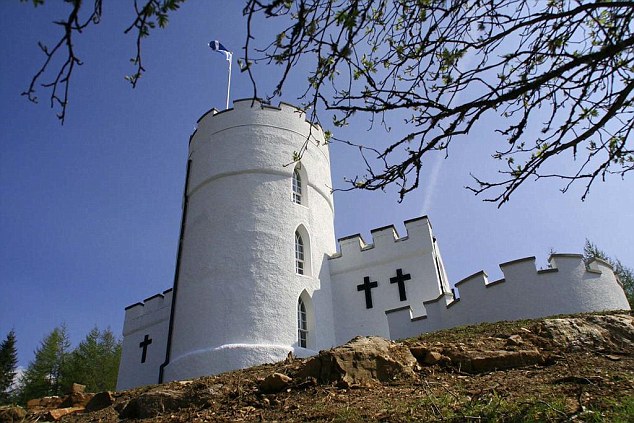 The turrets are a standout feature of this mini-castle but are plenty of other treats, including a hot tub. With its tartan carpets and antlers on the walls, and overlooking Loch Tay, The White Tower offers the full Scottish experience. An hour’s drive from Dunkeld, it’s also a luxurious stay. There are two bedrooms but you also get a miniature stately home feel thanks to its drawing room, library and a fully equipped kitchen.

15. Triangular landmark with a turret kitchen 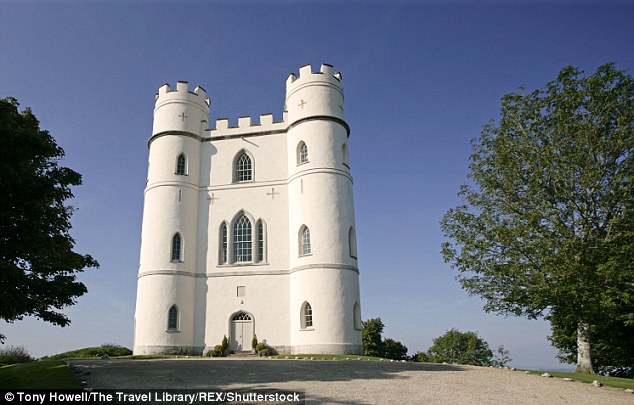 Just west of Exeter, high on a hill, this white building is a local landmark. Triangular in shape and dating from the 18th Century, Haldon Belvedere features grand high ceilings and arched windows. These days it’s often used for weddings. It sleeps two in a bedroom on the second floor. The bathroom is shoehorned into one turret, with a kitchen in another. There are superb views of Haldon Forest and Dorset’s Jurassic Coast. It’s run by the Devon Historic Buildings Trust.

Rosen Hotels in Orlando gives the gift of affordable travel ·

Stop telling people not to travel. Health officials should be teaching us how to do it safely.