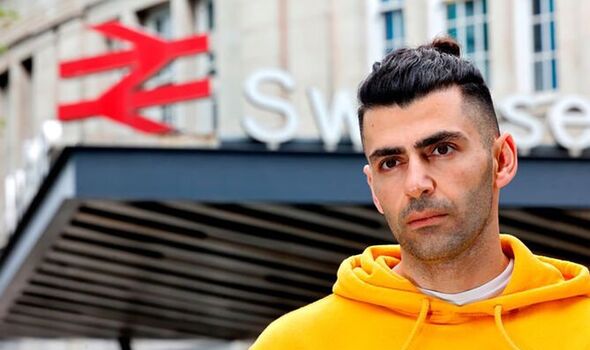 Raman arrived in Wales in August 2020 after walking for 45 days straight, mostly by night, from Greece. The 32-year-old was based at the Penally asylum seeker camp before being given his refugee status in March 2022.

Now living in Swansea, Raman says the ordeal happened when he tried to travel to Barry for work experience.

Not being able to afford a train ticket, he was hoping to use the Welsh government’s promise of free rail travel for refugees, reports Wales Online.

First Minister of Wales, Mark Drakeford announced the scheme in March saying: “Transport for Wales providing free travel for all refugees is another action which shows Wales is a place of safety and sanctuary for those who need our help.”

Before going to the station Raman, an Iranian Kurd, contacted Transport for Wales to check that the scheme applied to him, not just Ukrainians.

Their response – seen by Wales Online – said: “The Welsh Government have confirmed that this offer will be extended to all refugees.”

With this assurance, Raman travelled between Swansea and Barry (and back) on Monday, Tuesday and Wednesday last week without any issues.

He showed his biometric refugee card and was allowed on.

However when returning on Thursday, one of the guards instructed him that he had to bring his documentation from the Home Office as well.

Perplexed Raman did as instructed and went to the station on Friday with the intention of going to work.

However, after his documents were checked, he was publicly questioned about where he was going.

Raman says he was then told he was not eligible because he had arrived in the UK in 2020.

But Raman had not been granted refugee status when he arrived in the UK in 2020 as an asylum seeker and was only granted it in March this year.

He said the person working for Transport for Wales told him “this isn’t for you anyway it is for Ukrainans fleeing war”.

He said: “There was a police officer there. I wasn’t confident, I was breaking down.

“It’s not easy. Even if it’s your own language, your mother tongue, having such a conversation is not easy.

“You are feeling that you’ve been discriminated against, assaulted and humiliated at the same time.

“They didn’t try to get some information from the superior or call the Transport for Wales office for more information.”

Speaking in a cafe on Swansea’s seafront, Raman, who has excellent English, said: “They just decided and refused me. Why treat people like this?

“I walked 45 days straight to get to this country, mostly at night, through forests and mountains.

“I was afraid of seeing people, seeing car, scared of barking of dogs and other things. I still get traumatised about it. It was a nightmare.

“All to get here so I can sanctuary. When she said it is only for Ukrainians I thought ‘I am sorry my eyes are not blue or my hair blonde’.

“They probably would never be able to walk in my shoes for a minute. They probably couldn’t even imagine what I’ve been through, to then treat me like this now?”

He is quick to say he was not looking for sympathy from the TfW workers. Just that they follow their own rules.

“I don’t need compassion. I just need some professional behaviour,” he said.

Raman had to leave his young daughter behind when he fled Iran after authorities raided his house in an attempt to find him.

His motivation for speaking out over the incident is that he knows many other refugees will have had similar experiences with the scheme.

He said: “If the Welsh Government wants to be a nation of sanctuary they need to be clear about who can use this scheme.

“I am lucky that my employer was understanding, others would have lost their job when they hadn’t turned up.

“The Welsh Government need to educate people implanting the scheme what the difference is between an asylum seeker and somebody who has been granted refugee status.”

Lawyer and civil rights campaigner Hilary Brown said: “If the Welsh Government or any government put such policies in place, they have to be absolutely clear about who can access such benefits.

“The application of the scheme shouldn’t be at the discretion of individual Transport for Wales employees.

“When it comes down to discretion that can be interpreted and it can be influenced by people’s views whether they are discriminatory, racist or something else.

“So one minute, you’ve got the Welsh Government coming out saying all refugees, and then they’re saying Ukrainian refugees.

“When it is open to misinterpretation, people like Raman, get left behind. And this scheme was certainly meant to support refugees for six months in 2022. To enable them to go for work experience and job offers.

“My concern about what happened to him is, whoever this person was who told him to bring in his immigration papers, are they qualified to interpret the documentation granting refugee status.

“You can’t infer anything from that document anyway without understanding the Welsh Government’s policy.”

A Transport for Wales spokesman said: “We’re proud to support people seeking refuge who need to use our services, including offering free travel for those who have recently entered the country and setting up arrival hubs at Cardiff Central and Wrexham General.

“We are currently working with our colleagues in Welsh Government to evaluate and improve this scheme.

“We’re very sorry for any distress caused to the customer. We take any allegations of racism very seriously and we’ll carry out a full investigation with our station management team.”

Airbnb to Pay Estimated $250 Million to Hosts Impacted by Coronavirus