From a TOILET in Hull to giant metallic horse statues: The quirky sights Lonely Planet says are unmissable experiences in the UK

A public toilet, a house that measures just six feet across and 98ft-tall stainless-steel horse sculptures.

Lonely Planet recently revealed its top 500 experiences in the UK – and some are decidedly quirky.

Scroll down to see our pick of the bunch… 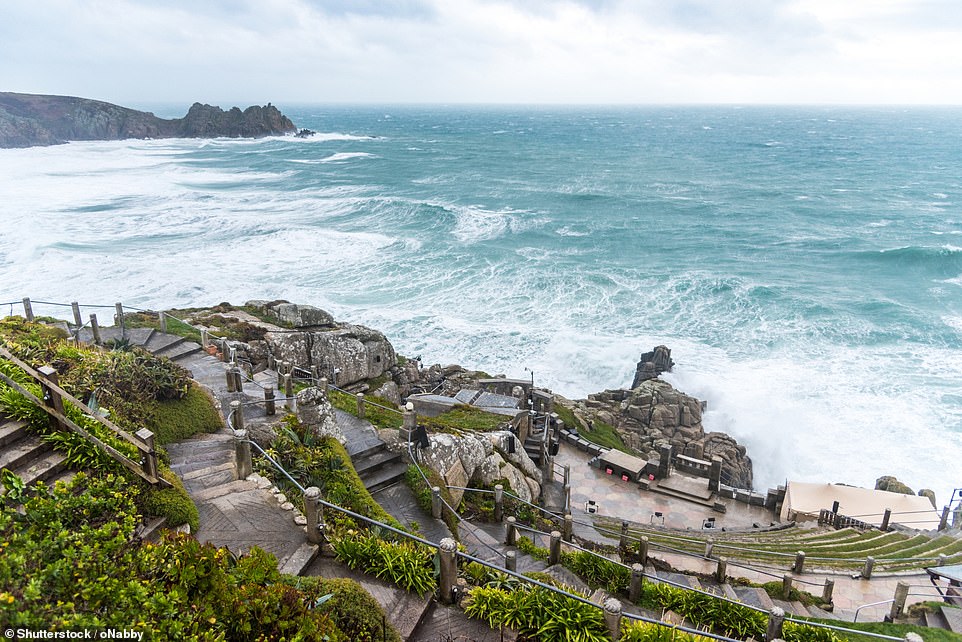 The Minack Theatre above the beach of Porthcurno in Cornwall. Lonely Planet says it is Britain’s ‘most applause-worthy theatre’

Located on a ‘craggy clifftop’ on the Cornish coast, the Minack Theatre is a ‘stunning amphitheatre’ cut into the cliffs above the popular beach of Porthcurno.

According to Lonely Planet, it is Britain’s most ‘applause-worthy theatre’ and hosts a summer-long programme of plays, gigs and other live performances.

The book says: ‘With its epic backdrop of wheeling gulls and white-capped surf, few locations feel as intrinsically theatrical as this.’ 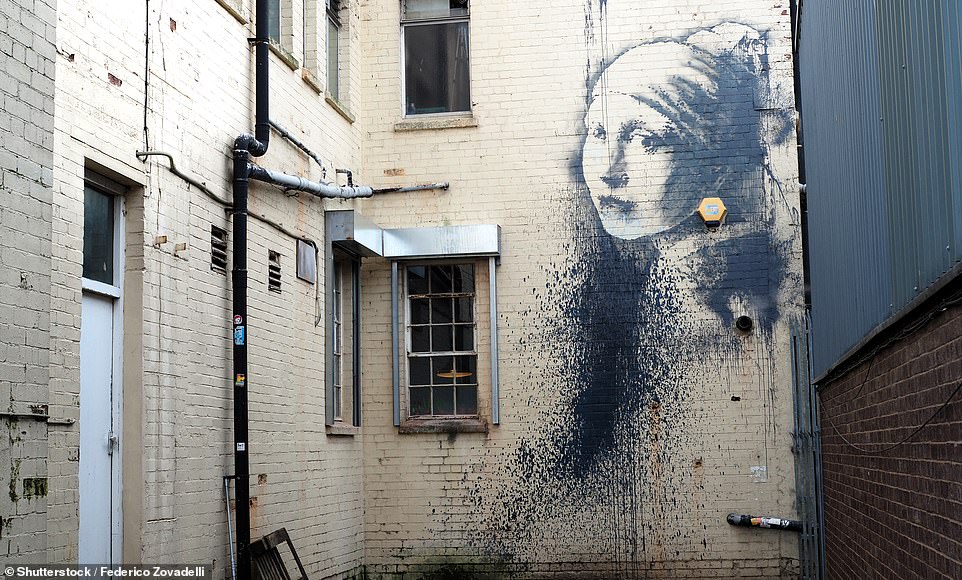 In Bristol, fans of Banksy can follow an official walking trail that takes in some of his artwork. Pictured is his Vermeer spoof ‘Girl with Pierced Eardrum’

Described as the world’s ‘most subversive street artist’, Banksy hails from Bristol, where he is said to have joined a guerrilla graffiti crew in the 1980s.

According to Lonely Planet, Banksy’s celebrity ‘has helped put the city on the map’. And Visit Bristol has devised an official walking trail that takes in several of his artworks.

These include a ‘Molotov-cocktail wielding teddy bear, a Vermeer spoof and a sexual health clinic cartoon’. 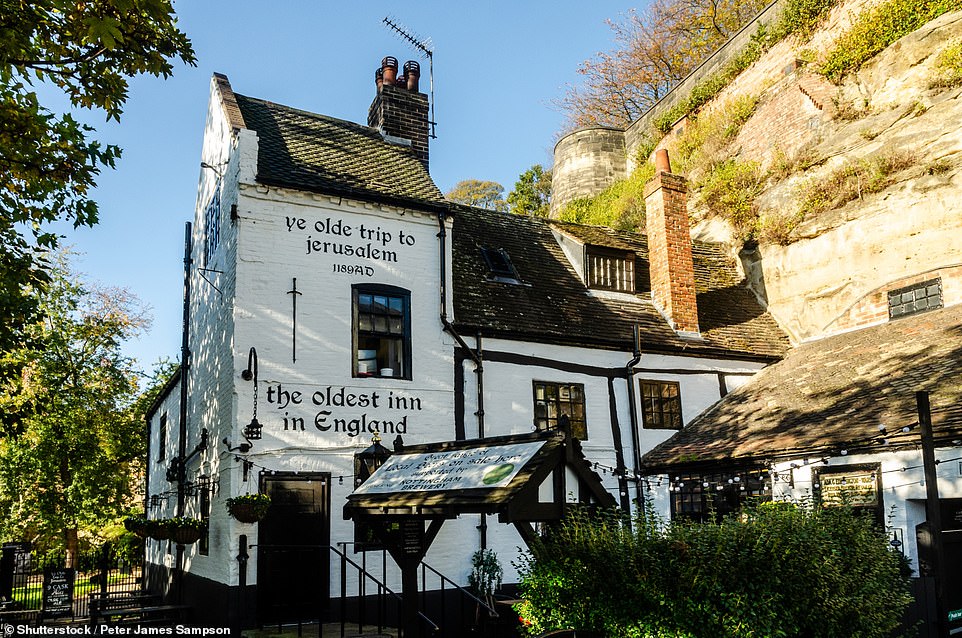 Ye Olde Trip to Jerusalem claims to be England’s oldest inn. Lonely Planet says it has a network of caves opening directly off the rear

Located in Nottingham, this ‘white-washed edifice’ claims to be the oldest inn in England and is ‘steeped in legend’.

According to the book, the pub was established as a ‘stop-off for Holy Land-bound pilgrims with Richard the Lionheart supposedly among the former clients’.

And Lonely Planet points out: ‘Ye Olde Trip to Jerusalem’s coolest feature is the network of caves opening directly off the rear, some used as drinking rooms or cellars. Characterful as the interior is, take a drink to the front garden courtyard if the weather allows: this opens up great views of the pub and castle above.’ 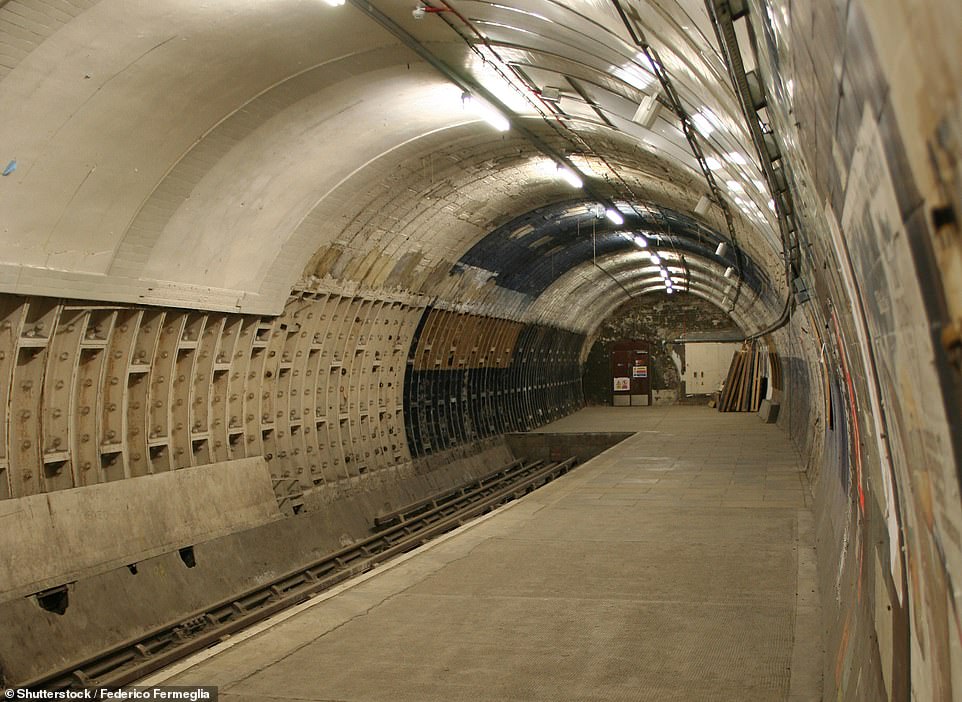 One of the disused platforms inside Aldwych Tube station in London. Visitors can now take tours of the abandoned station

London has a handful of no-longer-used ‘ghost stations’ and according to Lonely Planet, the most accessible is Aldwych, originally called Strand station.

It opened in 1907 and was temporarily closed during the Second World War to shelter Londoners during the Blitz as well as items from the British Museum. It finally closed in 1994.

Visitors can now take tours of the abandoned station. Lonely Planet explains: ‘Tours start in the ticket hall, complete with evocative old notices and impeccable tilework, pass the 1920s’ wooden-floored lifts and head down to platform level, where a 1970s Tube carriage is parked.’

Cruise by canal boat to the Kelpies – number 153 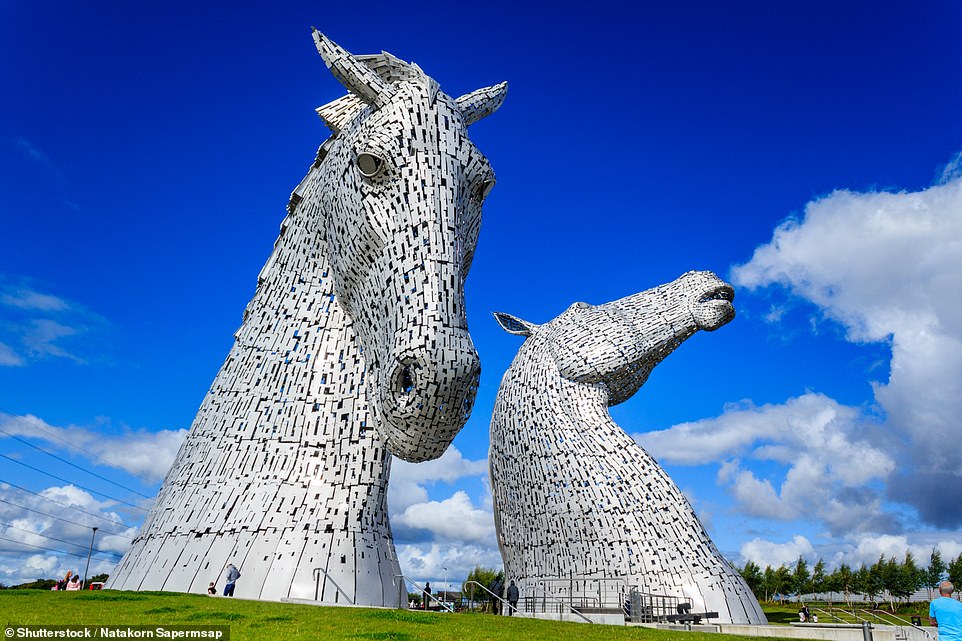 The 98ft-high duo of shining silver horse heads that are located near Falkirk. Each statue weighs 300 tonnes each

This duo of shining silver horseheads, or Kelpies, are located near Falkirk and are ’98ft high, fashioned from 928 stainless steel dragon scale plates and weigh 300 tonnes each’.

They were unveiled in 2013 and according to Lonely Planet, were built as a monument to Scotland’s Central Belt’s horse-powered heritage during the industrial revolution.

The book suggests: ‘You can discover the gigantic metalheads from the inside on a guided tour, but it’s more memorable to see them from the water, cruising from the Falkirk Wheel (the world’s only rotating boat lift) to the eastern gateway of the Forth and Clyde canal. 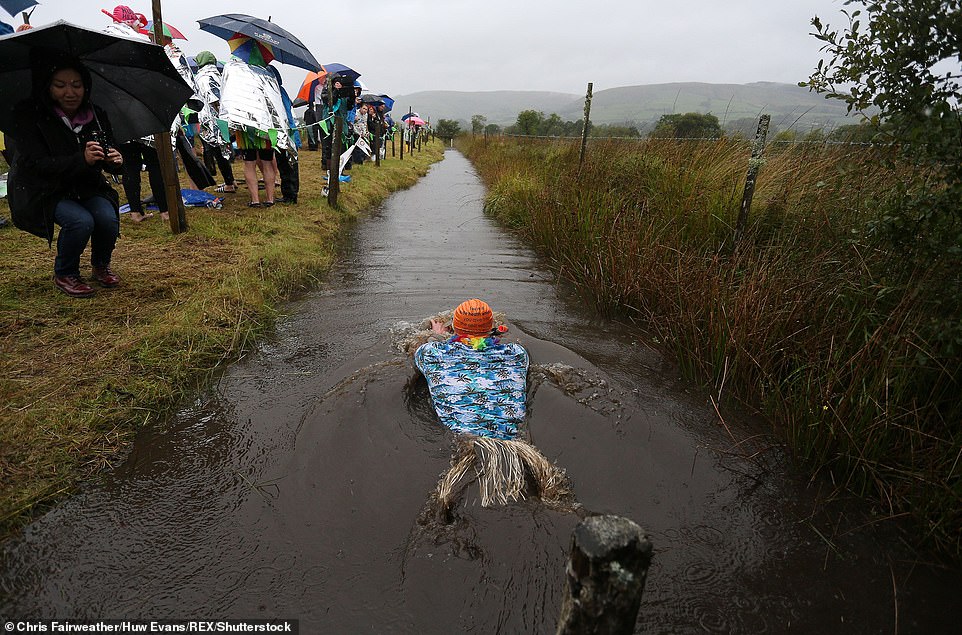 It started 34 years ago ‘when folk looked across the black and sodden land and came up with a cunning plan to liven things up’.

The championships take place on the last Sunday in August, when people ‘grease up, slap on a snorkel, fancy-dress outfit and a novelty hat and plunge into the tea-coloured bog along with equally bonkers bog snorkellers from all over the world’. 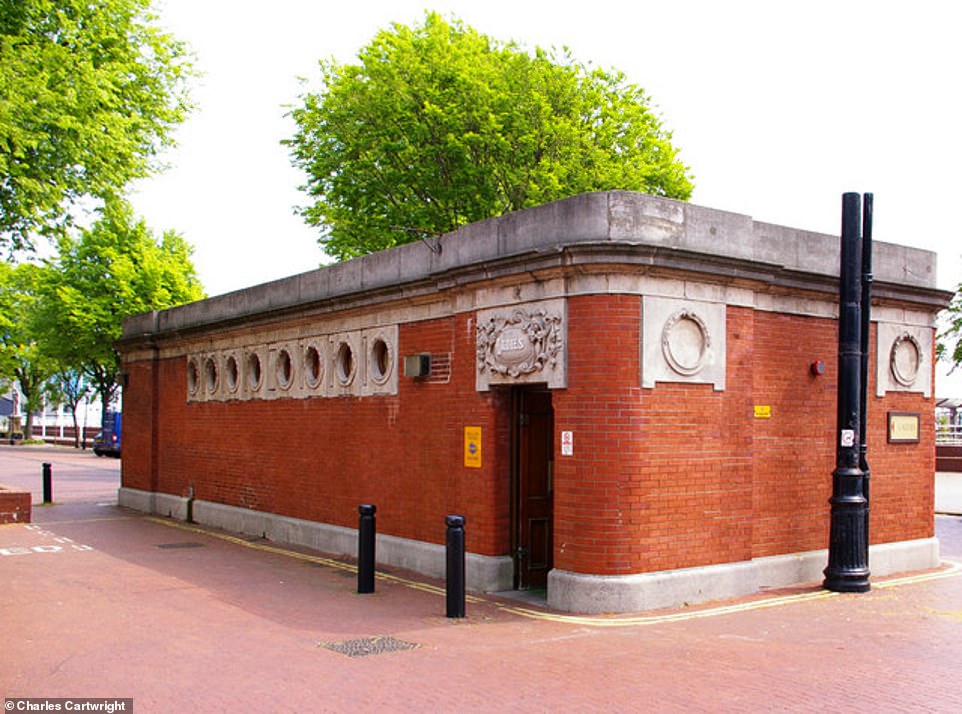 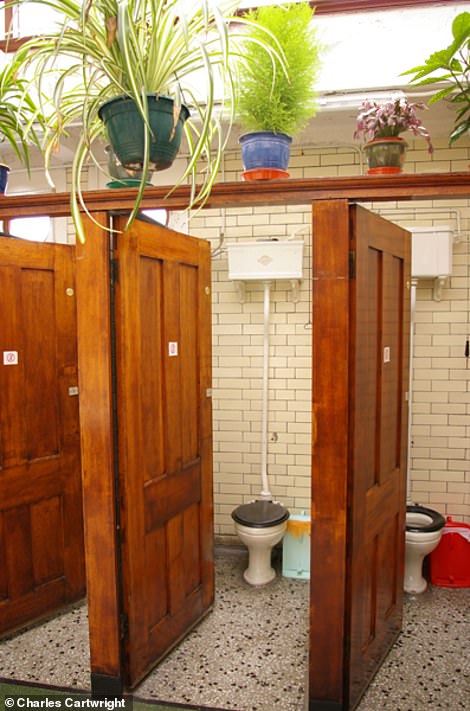 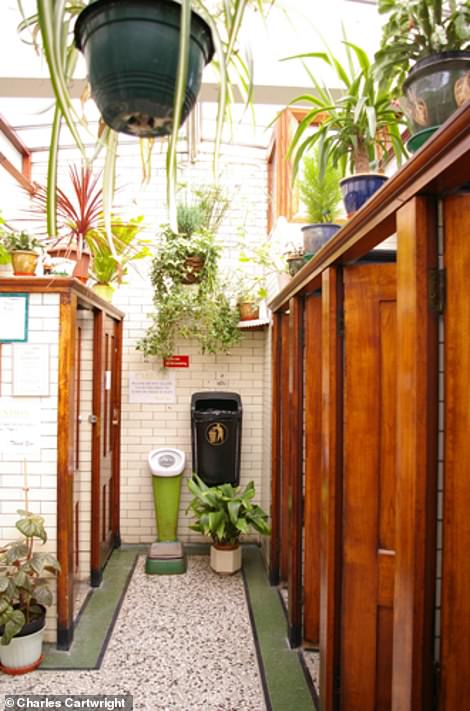 The toilets opened in 1926 to serve passengers waiting for the Humber Ferry. Lonely Planet says they are gorgeous temples of lavatorial luxury built in Edwardian style

The toilets opened in 1926 to serve passengers waiting for the Humber Ferry and were restored in the 1990s. Lonely Planet says they often win awards for the best-kept public loos. 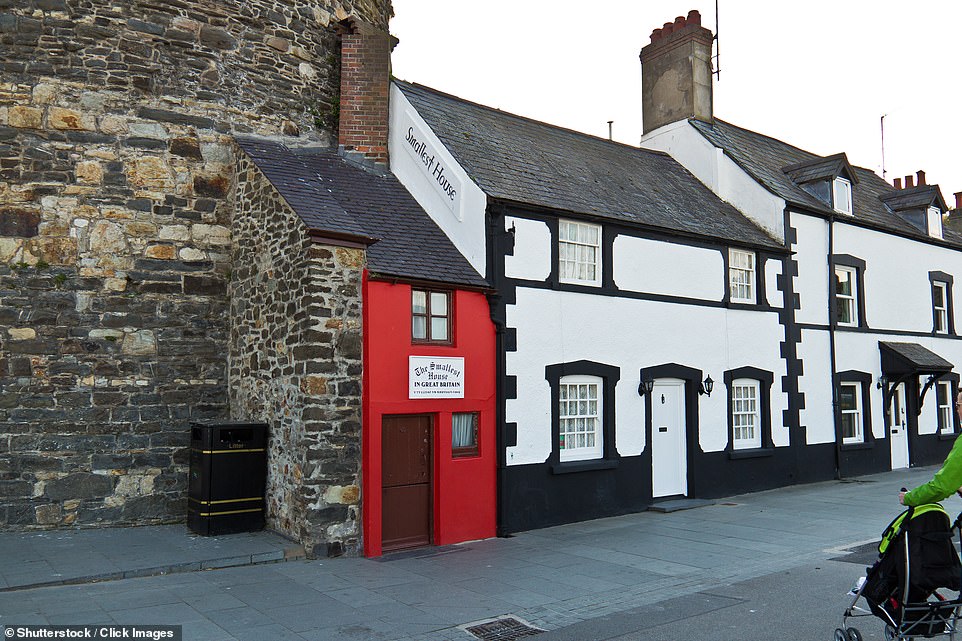 Quay House, pictured, in Conwy has been certified as Britain’s smallest house. Lonely Planet says thousands of visitors descend on the ‘dinky abode’

Certified as the smallest house in Great Britain, Quay House is located on the Conwy quayside and measures in at 72 inches wide and 122 inches high.

Lonely Planet writes: ‘Incredibly, the last inhabitant was a 6ft3in fisherman, Robert Jones, who was unable to stand fully inside: authorities declared the abode unfit for living in 1900 and forced him to move out.’

Now, the book says that thousands descend on the ‘dinky abode to glean an insight into the 16th-century Welsh lifestyle’.

34. Dinner and a show in Theatreland, London 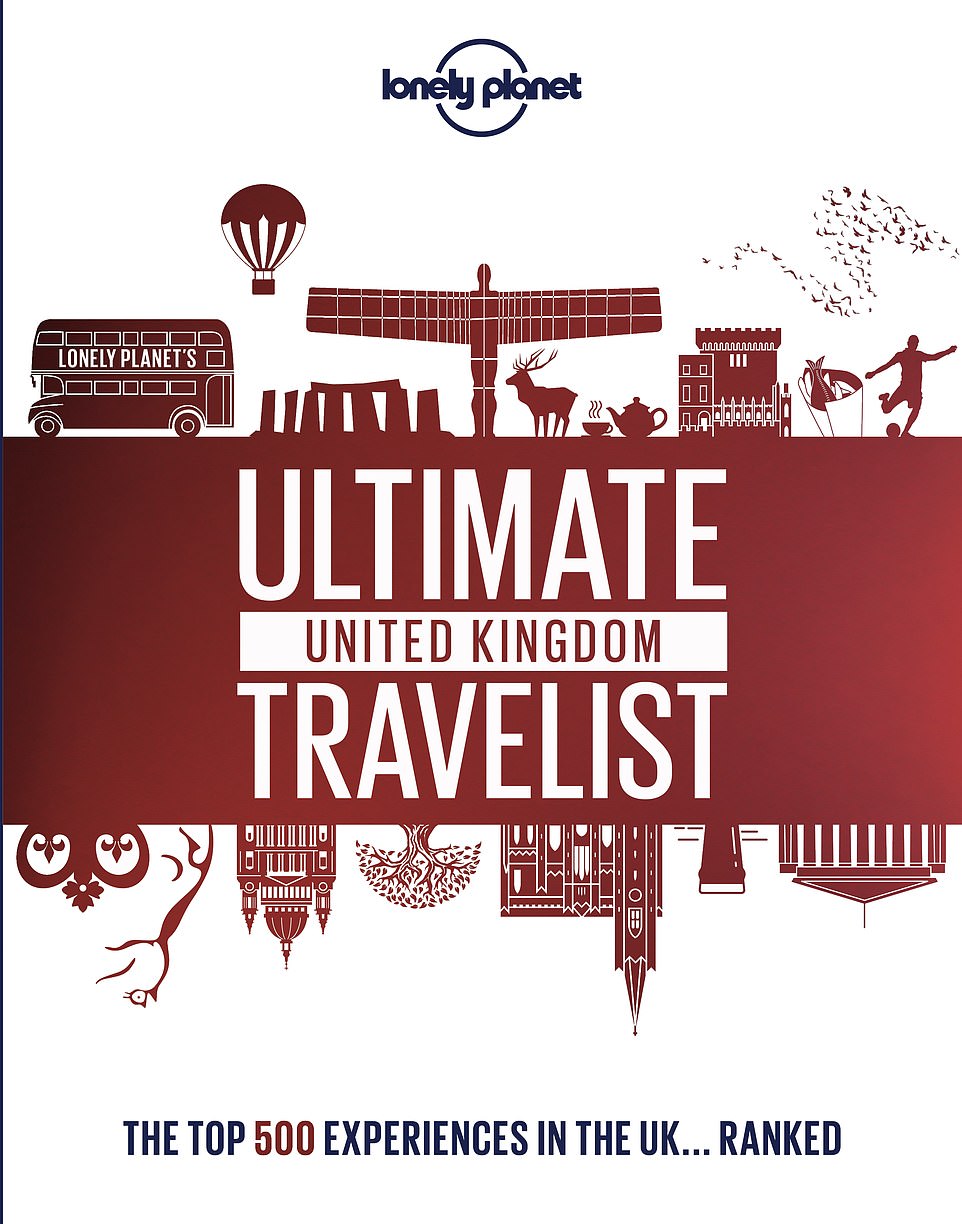 Find out if you need a Real ID. You’ve got a year to get one

7 great reasons to travel to Uzbekistan