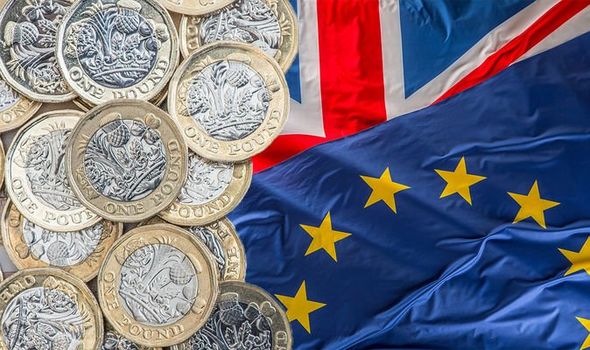 The pound to euro exchange rate is at the mercy of Brexit-related news as Parliament returns, experts have cautioned. “Negative headlines or a breakdown in talks,” could see GBP slump, they said. No data is due out today which could “lift sterling’s spirits,” should the pound be impacted by Brexit. The pound is currently trading at €1.154 against the euro, according to Bloomberg at the time of writing.

“Sterling remains relatively well-supported, though towards the bottom of its recent trading range, as the ongoing deadlock in cross-party Brexit talks begins to weigh on the pound,” Brown said.

“With Parliament returning from recess this week, the pound remains vulnerable to the likely increase in Brexit-related news, especially any negative headlines or a breakdown in talks, which would likely see moves to the downside.”

Laura Parsons, currency analyst at TorFX added: “We’ve hunted the eggs, eaten the hot cross buns and enjoyed the four-day weekend, but now it’s back to business as usual and the GBP/EUR exchange rate starts the four-day week trading in the region of €1.153.

“Rumours about a Tory plot to oust PM Theresa May are keeping the pound under pressure and there’s no UK data due for release today to lift Sterling’s spirits.

“GBP/EUR could experience limited movement this afternoon however when the Eurozone’s Consumer Confidence index is published. 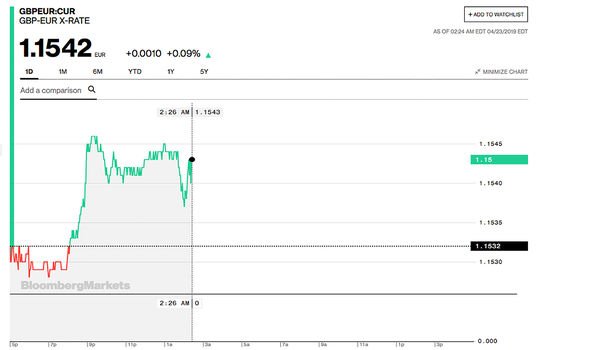 “If the index shows the improvement in sentiment forecast by economists the euro could edge higher.”

Sales were up 1.1 per cent in February, well above expectations of a fall of 0.3 per cent, driven by food and non-store retailing.

Meanwhile, employment and wage revealed the UK labour market is robust in the face of Brexit uncertainty. 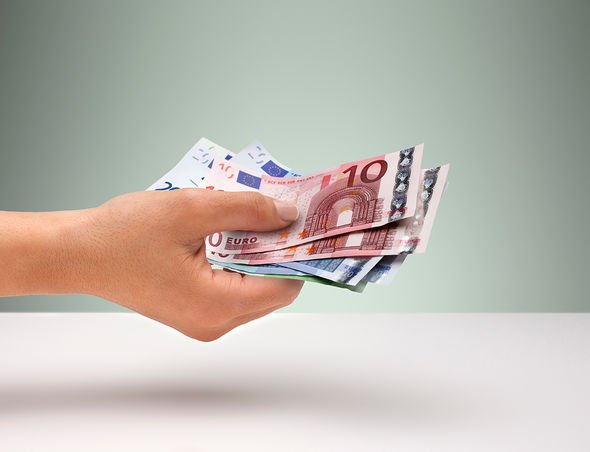 Research has shown that Brexit is having a tangible negative impact on travel, with a quarter of holidaymakers refusing to venture abroad due to the political chaos surrounding the UK’s departure from the European Union.

Candid statistics, related by Camping in the Forest, show 24 per cent are less likely to travel overseas in the entirety of 2019 – a direct consequence of the ongoing uncertainty.

For travellers who do go abroad, in the case of a no-deal Brexit, you will need both an international driving permit and green card should you use your own vehicle abroad for a vacation road trip, as opposed to hiring a car from a private firm.

Emma Coulthurst, travel commentator for holiday price comparison site travelsupermarket.com said: “No-deal essentials would include getting an International Driving Permit from the Post Office for £5.50 if you are driving abroad. Also, you’ll need a green card from your card insurer if you’re driving your own car in Europe.”

Coulthurst added one-fifth of Britons had been put off booking vacations altogether in light of the uncertain Brexit scenario.

She added travellers should not be put off by the political climate, and said: “If you put politics aside and you’re just looking for a good deal this summer, then there’s no reason not to book.

“Price reductions are affecting all types of holiday from self-catering to all-inclusive and for all star levels from two star to five star so it is worth comparing prices and seeing how much more you can get for a little more. If a deal is struck and there is a transition period, everything continues as normal until the end of 2020, including the continued validity of EHIC cards.”

Inside nude holidays – from raunchy naked village to no clothes festival

6 reasons why I love traveling solo