‘They are jam-packed and noise levels are off the charts because of babies’: Pilot and author of Cockpit Confidential, Patrick Smith, says there is an ‘airport lounge crisis’

Traditionally, airport lounges have been touted as havens of luxury and tranquillity for those rich enough to afford business class tickets.

But U.S pilot and author of the best-selling Cockpit Confidential, Patrick Smith, has complained that they are currently in a crisis.

They are, he says, increasingly not places ‘to escape the noise and bustle of the terminal’, but are in fact often ‘jam-packed’ with noise levels ‘off the charts’ thanks to babies and toddlers. 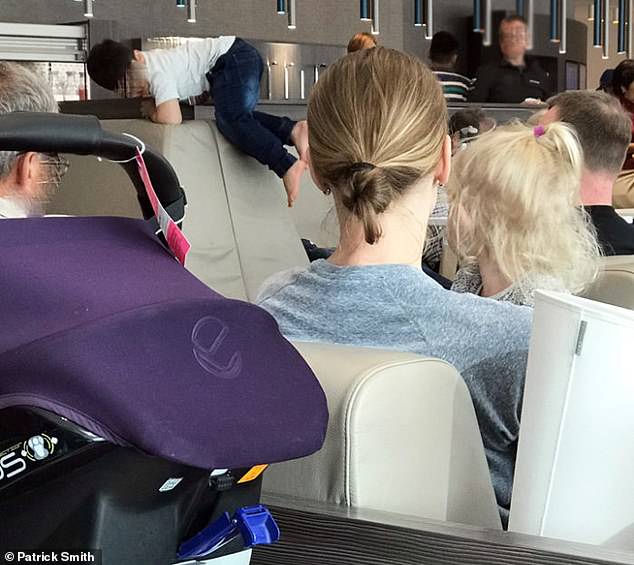 Mr Smith took this photograph at the Aspire lounge (shared by multiple carriers) at Amsterdam-Schiphol, to prove his point

He made his observations in a blog post titled ‘The Airport Lounge Crisis’ in which he states the strict rules he would apply for access to lounges and picks out the best and worst lounges he’s experienced.

But first he laments a decline in airport lounge standards.

He writes: ‘I’ve always thought the airport lounge was supposed to be an exclusive sort of place where premium class passengers could escape the noise and bustle of the terminal.

‘This is increasingly not the case.

‘The main issue is overcrowding. Lounges are often so jam-packed that customers are forced to stand. I’ve seen lines going literally out the door. Noise levels, meanwhile, are off the charts, often because the property is overloaded with babies and toddlers.

‘And here comes the waitstaff with their carts. They’re flinging dishes into the bin, rapid-fire, and it’s BANG, CLANG, SMASH, BANG, SMASH, CLANG.

‘What was intended to be a place of comfort and relaxation has become a cross between a day-care center and a cafeteria.’

He adds: ‘I remember the first time I stepped into the Cathay Pacific business lounge in Hong Kong, and how, not knowing better, I was literally nervous. 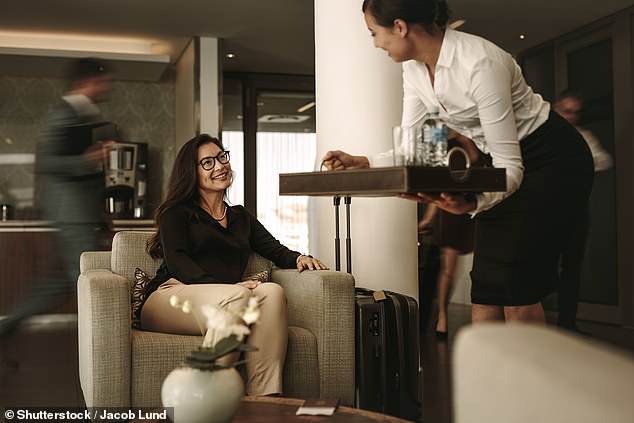 Mr Smith wrote on his blog post: ‘What was intended to be a place of comfort and relaxation has become a cross between a day-care center and a cafeteria’ (stock image)

‘I had this idea that I was underdressed — that everyone inside would look like James Bond, and that I’d be seen as an interloper and asked to leave.

‘Instead, here was a room overflowing with the same people you’d see in any shopping mall, most of them younger than me, in cargo shorts and ball caps, wolfing down beer and noodles.

‘This is by no means across the board, of course. It’s hit or miss, depending on the airport, the airline, and the time of day. The trend, though, isn’t a good one.’

The cause, he says, is twofold.

He continues: ‘More people are flying than ever before, in all classes, and/or with whatever mileage or frequent flyer status gets you in. On top of that, a growing number of passengers are using third-party perks to gain entry. Having an American Express platinum card, for example.’

Mr Smith’s rules for lounge access would be, he says:

1. For first and business class passengers only. No third-party (Amex, etc.) entry unless capacity is below 75 per cent. 2. One guest per passenger. 3. No guests for third-party customers. 4. No children under four years-old. Period, no exceptions.

His favourite lounge, he says, is the Emirates lounge in Dubai.

And his least favourite the Turkish Airlines business class lounge at Istanbul’s Ataturk Airport. Though this airport is closing soon.

Revealed: The struggle to save Bangkok's architectural heritage