I guess I love to people watch. I get to sit and relax. If it’s outdoors, then that means the weather is nice. Or it’s a way to pass the time in the airport. Sometimes I’ll strike up a conversation with the person next to me, or the staff (one time, while I was lunching at the bar at the SLS South Beach, the bartender let me sample a couple of the cocktails he was inventing for the dinner rush). But people-watching is an excellent solitary activity, whether you’re waiting for friends or flying completely solo.

The Carnival Sunrise has a couple of great locations for people watching. Cruising in general is an ideal venue for the practice, since there are usually lots of people nearby, doing interesting things.

On the Sunrise at night, the Alchemy Bar is ground zero for people watching.

The Alchemy runs alongside the main entertainment artery of the Sunrise. The ship’s Hip Stars band in the adjacent RedFrog Bar was doing its thing. It’s a really good, versatile, nine-piece band with a horn section and two singers. They were playing some funky, up-tempo jazz around 9 p.m. when I arrived at the Alchemy.

I had made plans for meeting some people “after dinner.” My dinner in the Radiance restaurant was the early seating, 6 p.m. Theirs was late, 8:15. I timed my arrival at Alchemy to what I believed was the close of their dinner, but I forgot how long a late seating can run. I settled into a comfortable chair facing the interior hall and put my phone away.

The RedFrog was jumping on this cruise. It was the location for some serious karaoke, and passengers crowded in for trivia, games and the beer (Carnival brews its own, and its West Coast IPA is pretty tasty), not to mention the Hip Stars. 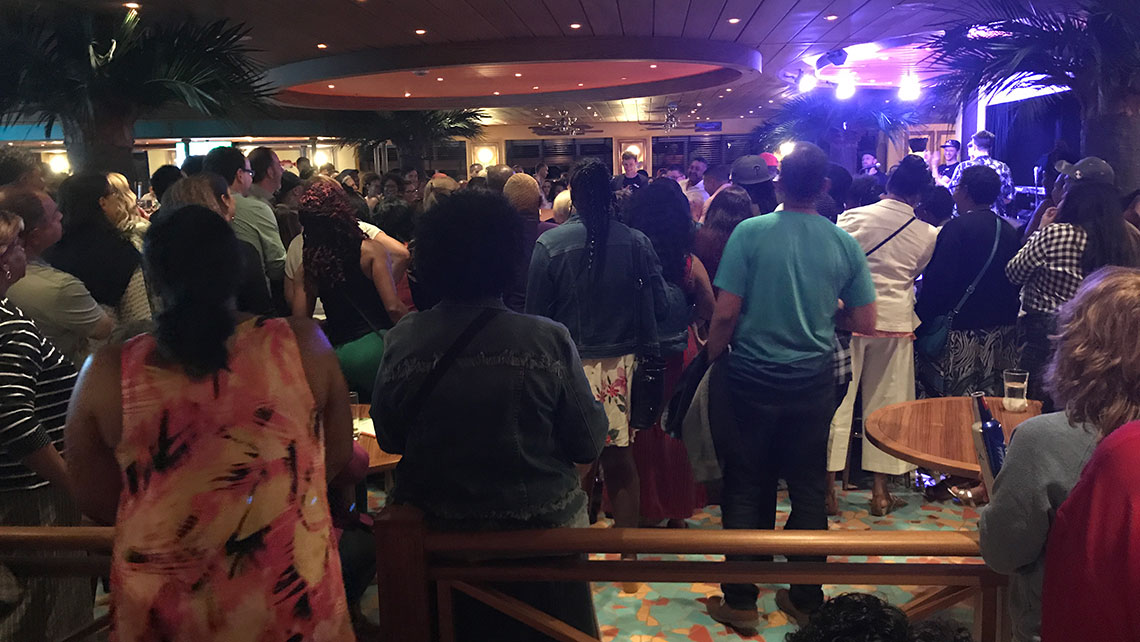 I could guess when a show concluded at the Limelight or Liquid Lounge, because the corridor would be thronged with passengers who were headed to the RedFrog or the casino, or maybe the Atrium, which is where Carnival’s entertainment staff would throw after-parties. Occasionally the door to the Piano Bar would open, and piano music would drift out and mingle with the RedFrog band.

The RedFrog’s entry is wide open, and I liked how passengers would kind of catch the beat of the music, start dancing, and then shimmy their way into the bar.

I noticed that the interpretation of “cruise elegant” dress code ran the gamut. Many women wore little black dresses and high heels, but others wore sandals and shorts. Some men wore sports coats, but many didn’t.

I reconfirmed how diverse the Sunrise’s passengers were in terms of nationality, race and age.

I tapped out on my phone observations of the types of beverages adults were carrying as they walked past: “Two women balancing martinis; a man with a giant, blue-tinted fishbowl; wine and beer; dangerous-looking rocks glasses; lots of tropical-looking cocktails” (my definition of “danger” was regarding the drink’s supposed alcohol content). 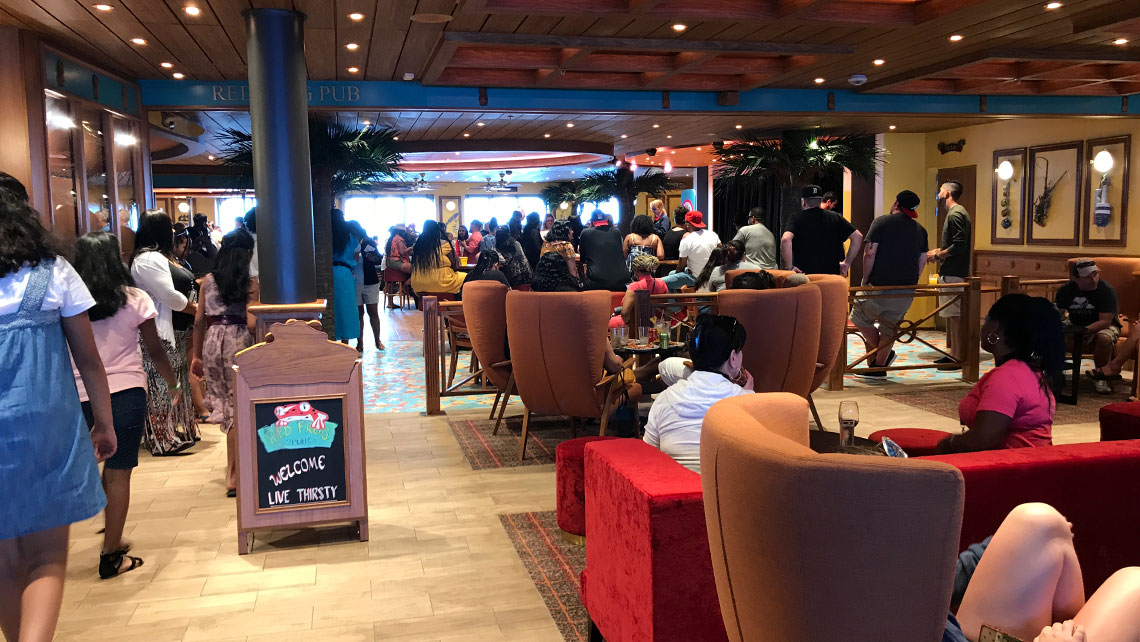 A couple at a nearby table were also kicking back and watching the crowds, and we fell to chatting. The man had sushi delivered from the adjacent Bonsai Sushi restaurant to his seat in Alchemy. I wished I’d thought of that. My early-seating dinner was starting to feel very long ago.

At around 10 p.m. my colleagues arrived en masse, and I switched from the armchair to the banquette and cracked open Alchemy’s cocktail menu. The Hip Stars came back on for R&B hits (did I mention they were really good?).

During the day, another great place for people-watching is at the midship pool. At the foot of the water park on Deck 10, a crows-nest-shaped section protrudes out over the pool area of Deck 9, and about four or five of the Sunrise’s heavy, plastic arm chairs fit comfortably in the space.

This is a good spot for parents if you can get it, as I used the perch to keep track of my daughter and two of her friends as they alternated between the waterslides and the swimming pool.

It’s also prime viewing for the hairy-chest contest and the scenes at the RedFrog and BlueIguana bars. And speaking of delivery, it’s a good spot as any to get a pizza. Passengers can use the Carnival Hub app to order Pizzeria del Capitano for delivery anywhere on the ship, for a $5 per pie fee.

The Allure Of Dakar ·