Home » Travel » Passport WARNING: Holidaymakers urged to renew by TOMORROW – ‘this could catch you out’

Travellers could risk being “caught out” under a no deal Brexit and could be stopped from entering countries in the Schengen zone, according to Which?. Around 3.5 million British passports will not comply with the validity rules, figures obtained by the consumer group have said. UK laws formerly meant when renewing your passport before expiry, up to nine months of the remaining time could be added to the next expiry date.

The Government has now warned this carried over time does not count towards the six months required validity when the UK exits the EU.

This means people with 15 months or less on their passports could be denied entry to EU destinations.

Friday, March 8 is three weeks before the final Brexit date and passports take three weeks to arrive after application.

ITV’s Good Morning Britain correspondent Nick Dixon explained the issue and warned: “There are two issues here. First of all, if we do end up with a no deal Brexit you have to make sure you have at least a valid six months remaining on your passport before travelling. 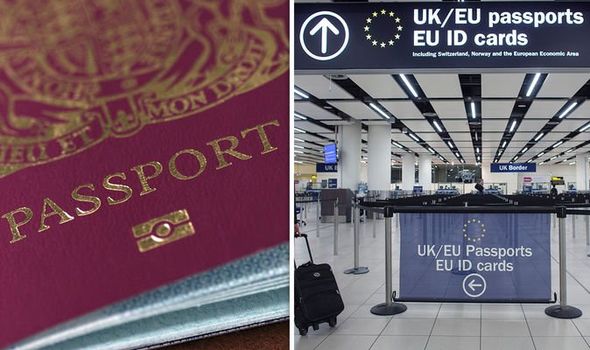 “So, really, the vast majority of the EU countries. But there is another rule here and another issue which could catch out an awful lot of travellers and holidaymakers.

“Essentially, if you have renewed your passport before it actually expired – remaining validity from the old passport may have transferred onto your new passport, making it last a little bit longer on paper.

“But if we leave with no deal that carry over deal with passports will no longer apply.

“And it could mean if your passport is less than the six months cut off you may be refused entrance to one of the EU countries.

“It’s well worth checking this out.”

Rory Boland, editor of Which? Travel magazine, said: “Millions of people could find their holiday plans disrupted or, worse yet, find themselves stranded at the departure gate and prevented from travelling altogether if they fail to renew their passport before the cut-off date.

“Anyone who thinks they might be affected should look to renew their passport today or if you already have travel plans in the near future, consider using the fast-track passport renewal service.”

A Home Office spokesman has also said: “If there is no deal, new rules would apply when travelling on a British passport to many European countries and some people may need to renew their passport earlier than planned.

“If your passport does not meet the new rules, you should apply for a new passport before travelling to the countries affected.

“You can use the government’s online passport checker to check a passport for travel to Europe. We recommend that you renew your passport in good time ahead of your travel date.

“In January we launched our ongoing campaign to inform the public of these new rules, and we continue to work with partners in the travel and transport industries to inform people with bookings after 29 March 2019.”

5 ways to enjoy Verbier in the Summer