Now human guinea pigs prepare to board a non-stop Qantas Dreamliner research flight from London Heathrow to Sydney – and MailOnline will be joining them!

Human guinea pigs are lining up once more to trial an ultra-long-haul Qantas research flight – and a MailOnline Travel writer will be one of them.

He will board a Boeing 787 Dreamliner at London Heathrow tomorrow that will then fly non-stop to Sydney – a distance of 17,800km (11,060 miles) that’ll take around 19-and-a-half hours to cover.

This flight will be only the second time in history that a commercial airline has flown direct from London to Sydney. 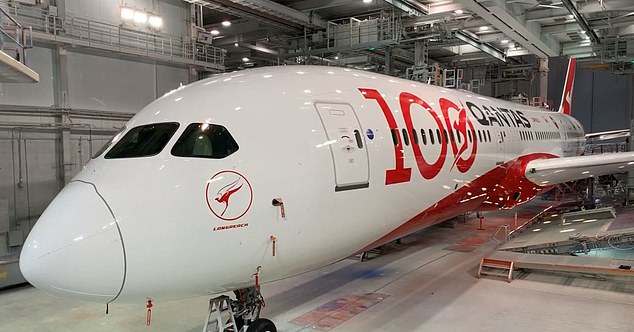 The first was 30 years ago in 1989, when Qantas operated a 747-400 ferry flight between the two cities. The aircraft that performed that flight (VH-OJA) is now on public display at an aviation museum, south of Sydney.

The Heathrow flight is operating to gather data about inflight passenger and crew health and wellbeing on ultra-long-haul journeys ahead of Qantas’s ‘Project Sunrise’ – non-stop commercial flights from the east coast of Australia (Brisbane, Sydney and Melbourne) to London and New York.

The first research flight operated between New York and Sydney non-stop four weeks ago with 49 passengers and crew. It cut around three hours off the typical gate-to-gate travel time of current one-stop flights. 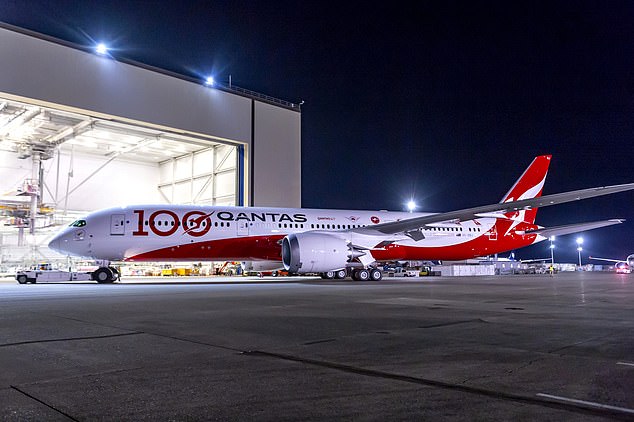 The London to Sydney Project Sunrise research flight will operate almost 100 years to the day that the first ever flight from the UK to Australia took off from Hounslow Heath (near today’s Heathrow airport) on November 12, 1919. It landed in Darwin 28 days later on December 10, 1919.

Researchers from the University of Sydney’s Charles Perkins Centre as well as the Cooperative Research Centre for Alertness, Safety and Productivity (Alertness CRC) will again travel on the non-stop Dreamliner flight to collect passenger and crew data.

The research flight from Heathrow will carry around 50 passengers and crew in order to give the 787-9 the range required. A similar arrangement was in place for the JFK operation.

While the Heathrow flight is over 1,500 kilometres (932 miles) further than New York to Sydney, the duration is expected to be similar due to prevailing tail winds between London and Sydney.

On board, six Qantas Frequent Flyers will take part in the passenger research. They will be fitted with wearable technology devices and follow a redesigned eating and sleeping schedule which aims to facilitate onboard wellbeing and adjustment to new time zones. 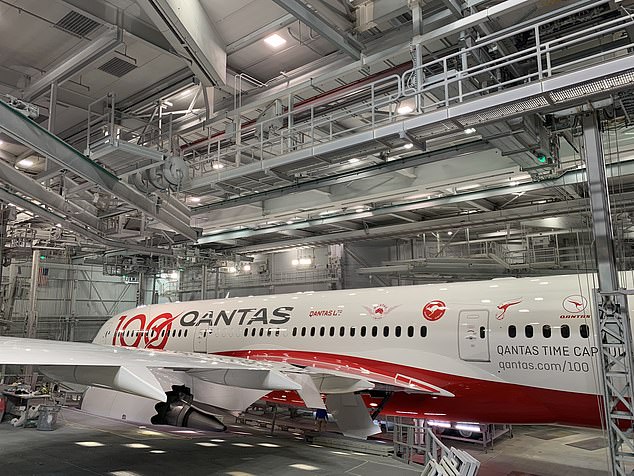 On board, six Qantas Frequent Flyers will take part in the passenger research

All carbon emissions from the research flights will be offset.

Qantas recently announced an acceleration of its efforts to reduce its broader carbon footprint, including effectively doubling current levels of flight offsetting, capping carbon emissions from 2020 onwards and totally eliminating net emissions by the year 2050.

Qantas CEO Alan Joyce said air travel had evolved over the years and innovation was key, which involved looking at options to redesign aircraft cabins to include ‘move and stretch’ zones and other social spaces.

He said: ‘We know that travellers want room to move on these direct services, and the exercises we encouraged on the first research flight seemed to work really well. So, we’re definitely looking to incorporate on-board stretching zones and even some simple modifications like overhead handles to encourage low impact exercises.’

Professor Corinne Caillaud from the Charles Perkins Centre said: ‘We are hopeful that the interventions and strategies we tried on the first research flight helped passengers better manage the challenges of crossing multiple time zones. From a research point of view, it was something quite novel.

‘We’re looking forward to this second flight, which will involve passengers eating supper at breakfast time, with the aim of encouraging them to sleep at 10am in the morning London time to help avoid light and reset their body clock to Sydney time.’

Passengers will board at 6am London time. After take-off they will be offered a range of high GI supper options such as chicken broth with macaroni or a steak sandwich, along with a glass of wine and a milk-based pana cotta dessert.

Cabin lighting and temperature, stretching and meditation will also play key roles in the research.

Airbus and Boeing have pitched aircraft (the A350 and 777X respectively) with the range to operate Project Sunrise flights on a commercial basis. These pitches, together with findings from the research flights and other streams of work, will form part of a business case being developed by Qantas to inform a final yes/no decision on Project Sunrise expected by the end of this year.

If approved, flights could start as early as 2023.

QANTAS AND THE UK – A TIMELINE

The world’s first flight from London to Australia touches down in Darwin. It took 28 days. Hudson Fysh, one of the men who would go on to found Qantas was first to meet it – he’d just built the airfield, and with Paul McGinness had plotted an air route across Queensland and the Northern Territory to get there. In this moment, they recognised the potential to link up outback towns in short hops, and distant continents in long-haul leaps. Queensland and Northern Territory Aerial Services was born one year later.

With a new name to reflect its overseas ambitions, Qantas Empire Airways made its first international flight. In February, a Qantas four-engine de Havilland DH86 flew airmail to Singapore, with Britain’s Imperial Airways taking it onto London. By April, passengers were on board, too. These were among the earliest codeshare arrangements. One leg over Mussolini’s Italy had to be completed by train. Still, it was faster than the six-week voyage by boat.

Flying boats joined the Qantas fleet. The Dreamliners of their day, they represented a new era of space, style and comfort, with in-flight meals and reclining seats. They made their inaugural flight from Sydney in July, taking off from the international ‘airport’ in Sydney Harbour’s Rose Bay and again linking arms with Imperial Airways in Singapore. It was the pinnacle of an incredible decade of progress – but world war loomed.

During the Second World War, mail couldn’t be delivered across the Mediterranean. It was instead sent from London to South Africa by sea, and then flown to Sydney on an unlikely flight path that followed the coastline of the Indian Ocean around in a giant semi-circle, making more than 40 stops along the way. It was called the Horseshoe Route. Qantas operated the 11-stop leg between Singapore and Sydney, and then onto Auckland.

Singapore was the critical hub for all Australia-UK operations. When it fell in 1942, Qantas was forced to improvise – attempting a new route to bridge the communications gap to Britain. It was, and remains, the longest passenger flight by elapsed time in aviation history. From 1943, 30-hour flights spanned the Indian Ocean between Perth and Colombo in today’s Sri Lanka. Pilots had to operate in total radio silence, using celestial navigation to find their way. Passengers spent so long in the air that they saw the sun rise twice and were presented with a certificate upon landing inducting them into the Rare and Secret Order of the Double Sunrise. Hundreds of these flights took place over two years. Every one of them landed without incident.

Qantas was operating larger Liberator aircraft on its Indian Ocean route by the war’s end, and for the first time, the flying kangaroo emblem joined passengers and crew on their journey. The Kangaroo Service was born – but flights still had to meet their British partners half-way along the journey at Karachi to hand over passengers for the final legs to London. To fly higher and further, the airline sorely needed an even larger aircraft with a pressurised cabin. 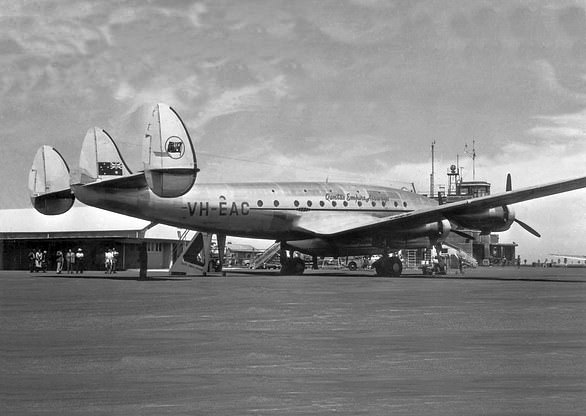 The Qantas ‘Connie’, which operated the first service from Sydney all the way to London. It reduced the journey time from 10 days to 58 hours

The American-built Lockheed Constellation was a spectacular and revolutionary long-range aircraft. When Qantas took delivery of the ‘Connie’ in 1947, the Kangaroo Route to London could finally be made whole. The newly-nationalised airline operated the first service from Sydney all the way to London in December. A journey that had taken almost ten days on a flying boat in 1938 was now reduced to 58 flying hours.

The sleeker Super Constellation, which joined the fleet in 1954, began operating Qantas’s first round-the-world service. In 1958, two ‘Super Connies’ departed Sydney at the same time. One headed westbound along the Kangaroo Route and one headed the other direction over the Pacific. They both passed through London on their opposite paths back home.

Everything changed when the Boeing 707 passenger jet joined the Qantas fleet. Qantas was the first non-US airline to take delivery of this revolutionary aircraft, which halved travel times to distant continents and ushered in the modern era of aviation. 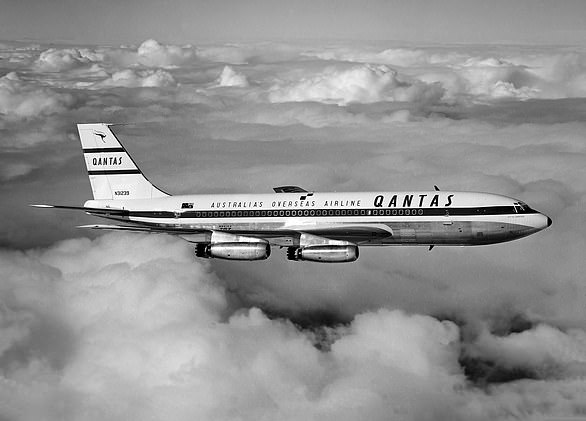 When the Qantas 707 began flying the Kangaroo Route on October 27, it marked the first commercial jet service between England and Australia.

Qantas took delivery of its first Boeing 747 jumbo jets and started flying them to London in November. The instantly recognisable aircraft transformed the economics of flying and put overseas travel within reach of all Australians for the first time. By the end of the decade, Qantas was the only airline in the world with a fleet that consisted entirely of Boeing 747s.

A brand new Qantas Boeing 747-400, VH-OJA flew non-stop from London to Sydney, breaking the record for the world’s flight by a commercial aircraft. The new jumbo fleet was named Longreach – a nod to past origins and vast distances – and OJA ran on a special, high-density fuel. Passengers and crew spent 20 hours and nine minutes in the air.

Qantas began the first-ever non-stop scheduled passenger service between Australia and the United Kingdom, departing Perth for Heathrow in the state-of-the-art Boeing 787 Dreamliner. The service finally connected the last two populated continents on earth not linked by a single regular flight, and it instantly became the most popular route on Qantas’s entire network.

Replicating the record-breaking journey aboard the jumbo jet 30 years earlier, a Qantas Dreamliner will fly non-stop from London to Sydney – only in less time and with almost half the fuel.

Virgin Trains to Build Station at PortMiami by End of 2020

Malindo Air In the Know ·

Why balmy, beautiful Singapore is not just a stopover any more

Los Alamos County in New Mexico Ranks As the Healthiest Community in the U.S.