Home » Travel » New York’s finest! From burgers to brasseries and coffee to cocktails

New York’s finest! An insider’s guide to everything from burgers to brasseries, coffee to cocktails and even curries

Want to see the best of New York? Then forget about the tourist traps and head to the places that native New Yorkers rate the highest: the bars, the burgers, the brunches and everything in between. We’ve pulled all the latest award-winners together to reveal a best-in-show New York that’s full of surprises.

Testing out all the venues has taken me to parts of the city I didn’t know existed – and it’s given me a road map for the perfect city tour. Here’s my verdict on each of the new local favourites. 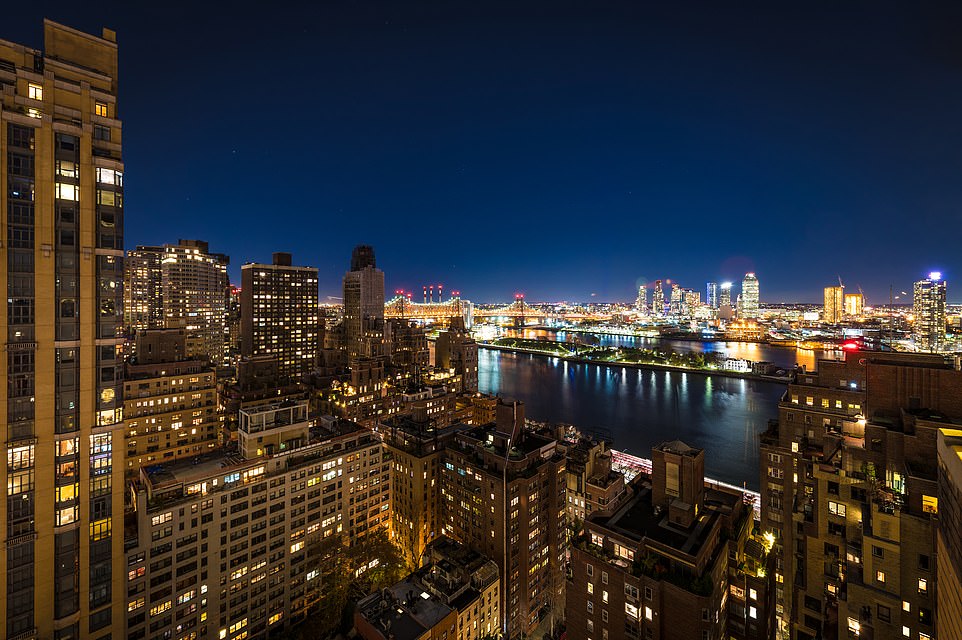 Hipster haunt: The view across the East River from the rooftop Ophelia bar where Frank Sinatra used to hang out

No accolade is fought over more fiercely than the one for the city’s best burger – and at the New York Wine and Food Festival, Clinton Hall’s Double Smash ($17, £13.50) romped home with the People’s Choice award for its two beef patties with cheese, cheese sauce and crispy shallots, served on a mountain of fries.

How does it work, I ask, when I turn up to the Washington Street branch. ‘You find a flat space and put your butt on it,’ says the barman cheerfully. The place is noisy, with a bank of TVs, plus an outside area with pitch and putt and giant Jenga. It’s as much a hangout as a hamburger destination. 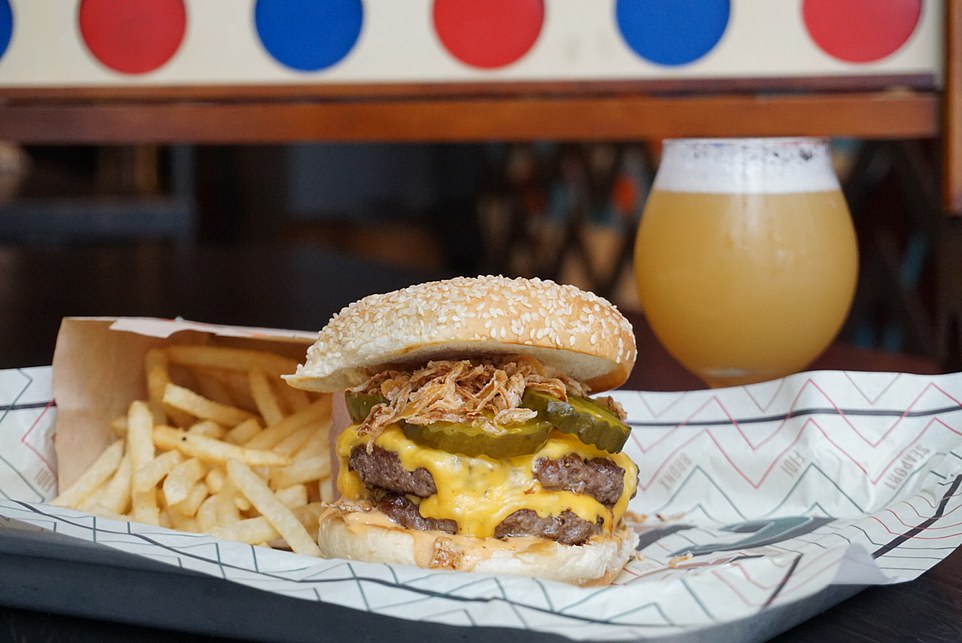 Say cheese! A Clinton Hall Double Smash burger, above, has two beef patties with cheese, cheese sauce and crispy shallots and is served on a mountain of fries

Verdict: Filling, but with two burgers, cheese and cheese sauce, it’s a bit much. I prefer the simple Corner Bistro burger on W 4th Street. (clintonhallny.com)

Just a year after opening, Frenchette in the Tribeca district has scooped a collection of awards, including Eater’s Restaurant of the Year for its gutsy Gallic food. The decor belongs to a Truffaut film. Best of all, there’s a bargain prix fixe menu – two courses, a glass of wine and an espresso for $28 (£22).

Verdict: I came expecting pretension but it’s relaxed with a buzz. (frenchettenyc.com)

Time Out magazine named this tiny coffee bar the best in the city, and owner Chi Sum Ngai’s signature drink is a deconstructed latte ($8, £6.30). For the uninitiated, that’s separate cups of espresso, steamed milk from a farm in Salem in upstate New York, and a latte, which you sip one at a time. They come accompanied by a glass of sparkling water to cleanse the palate, and a wafer. This may be a place of (expensive) coffee pilgrimage, but you can still pop in for a quick cappuccino if you prefer.

Verdict: Wins on every level – a world away from Starbucks. (coffeeprojectny.com)

From the pretzels in Central Park to artisanal cookie dough in Brooklyn’s weekly Smorgasburg market, New Yorkers have a full-throated passion for street food, and the annual Vendy Awards reward the best of the best. This year, Royal Grill Halal won the People’s Choice Cup. On 44th Street near Bryant Park, the tiny metal cart may look like all the others in the street, but the appreciative queue at its shiny counter makes it stand out.

New York is all about the skyscrapers, and as it is the epitome of big-city cool to have a drink at the top of one, the race to be awarded the best rooftop bar is tough.

The latest Grub Street magazine winner is Ophelia, and even though it’s next door to the no-fun UN building, this 26th-floor eyrie has all the hipster bar essentials, including taxidermy, laid-back charm and well-constructed cocktails – favourites include classic martinis for $28 (£22).

The place also has a playful history – Frank Sinatra hung out here when it was called the Top Of The Tower restaurant.

Verdict: It’s a charmer of a bar with no attitude, despite the altitude. (opheliany.com) 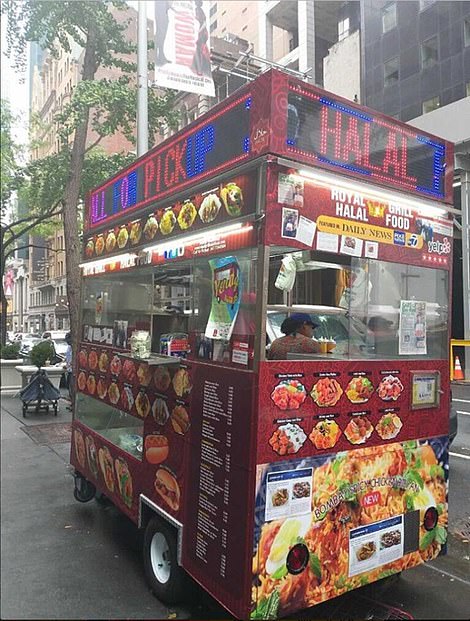 In December, this tiny pizzeria topped website Gothamist’s best pizza list. Based on Broadway, high on the Upper West Side, it was a controversial choice because owner Frank Tuttolomondo uses a focaccia base instead of a more traditional one. But the queues speak for themselves, and so do the pizzas. Toppings are loaded with a generous hand and the resulting pizza is charred, cheap and delicious.

The Big Apple has made such a feature over ‘shops as social places’ that New York magazine created an awards category for them – and this is the latest winner. Traffic roars past, but this all-white shop in SoHo is a haven of serenity.

Inside, there’s a selection of ceramics, fashion and books, a small cafe and even a garden in which to hang out.

My coffee comes with two sprigs of lavender. I’m not sure why, but I appreciate the gesture. It is expensive at $8 (£6.30) but the serenity is priceless, even if everything else in the shop is way out of my league in terms of price.

Verdict: It looks a bit intimidating but I love it. (hesperios.com)

The annual James Beard awards are America’s food Oscars and in 2018 it voted Missy Robbins the best chef in New York. Her restaurant, Lilia, is a light and airy warehouse space in the ultra-hip Williamsburg area of Brooklyn. You want a table? Fuggetaboutit. Reservations open up once a month and disappear within minutes, but if you turn up with the other foodie faithful at 5.30pm, you can eat at the bar.

Verdict: Sitting at the bar is great fun and lets you look into the kitchen. My pasta ($21, £16.60) was delicious. (lilianewyork.com)

Cafe Dante has been a landmark in Greenwich Village since 1915, and since it opened a bar in 2015 it hasn’t stopped winning awards.

The current winner of best bar from Time Out, it has style in spades, with bow-tied barmen behind the counter. The negronis ($14, £11) are spectacular, and the food is just as good as the cocktails (pastas and salads are best). Real fans sit at the bar – and get there early as happy hour runs from 3pm to 6pm.

Verdict: This place doesn’t rest on its award-winning laurels – it’s welcoming, relaxed, and the cocktails and food are delicious. (dante-nyc.com)

Grub Street says that the minuscule Madcap Cafe in Brooklyn serves the best brunch in New York. The rave dish is the blueberry pancake, baked in a skillet and it’s a light and fluffy winner at $11 (£8.75). The decor is 1940s small-town America and so is the feel, with locals perched on seats at the counter. But chef and owner Heather Fuller has worked at some of the best restaurants in town.

Verdict: Madcap, which opened in April 2018, is set to become my new New York hangout. Charm and bargain prices make it a winner. (madcapcafebk.com) 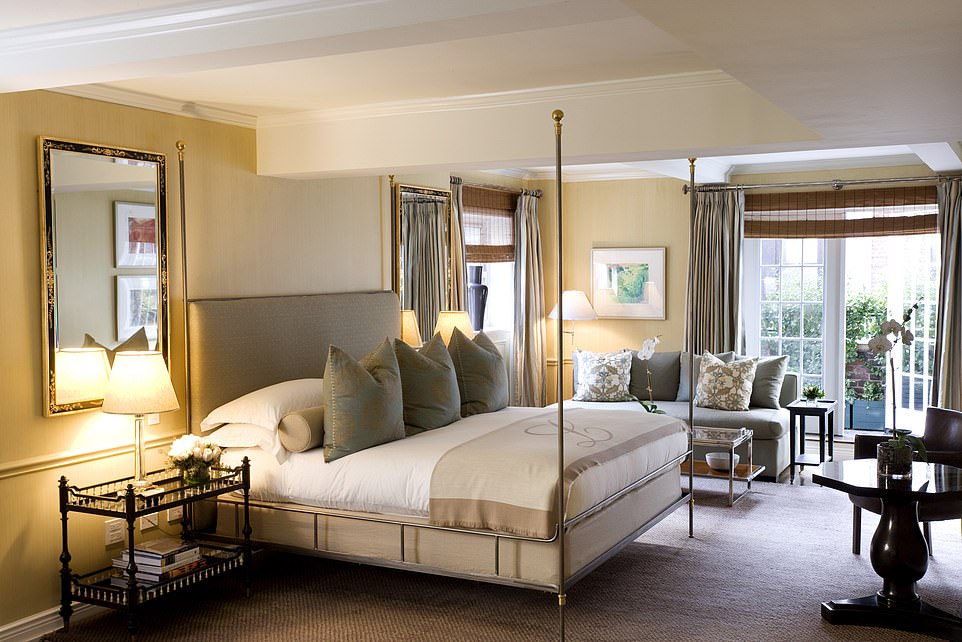 Old-school luxury: One of the bedrooms at The Lowell, above, which is tucked away on a leafy street near Central Park

The stylish readers of Travel & Leisure magazine voted this hotel New York’s finest. Tucked away on a leafy street near Central Park, an understated entrance leads to a series of hidden bars and restaurants – some available only for guests, others open to all – and some tiny terraces.

Upstairs, the charm and stratospheric service levels continue, with 74 very spacious rooms and suites, all eau-de-nil peacefulness and old-school luxury.

Verdict: Unshowy but very polished, The Lowell definitely lives up to its billing. It’s low-key but lovely. (lowellhotel.com)

Flights with British Airways (ba.com) to New York cost from £293 return. Rooms at The Lowell start at $595 (£470) on a room-only basis. For more information on the city, visit nycgo.com.