Home » Travel » New York – then and now, in pictures

New York – then and now: Fascinating vintage pictures of Manhattan matched with images of the same locations in the modern-day, from Brooklyn Bridge to Times Square

It was once a Dutch village – now it’s America’s most densely packed urban environment and the most recognisable and exciting metropolis in the world.

So declares author Marcia Reiss in her mesmerising book New York – Then and Now (Pavilion).

Marcia, previously the public affairs director for the New York City Department of Ports and Trade, takes the reader on a fascinating journey through New York’s history, using archive pictures of famous locations in the city matched precisely with specially commissioned present-day images by Evan Joseph of the same spots in the present day.

Marcia writes: ‘[The book] places today’s cityscape within the context of history, reflecting the changing and enduring aspects of life in New York.

‘The historic photos reveal the many ways New Yorkers lived, worked and moved about the city, how they entertained themselves, followed the latest fashions, celebrated great events, and endured hardship and tragedy.’

Scroll down to see some of the book’s intriguing old and new pictures, presented here side by side. 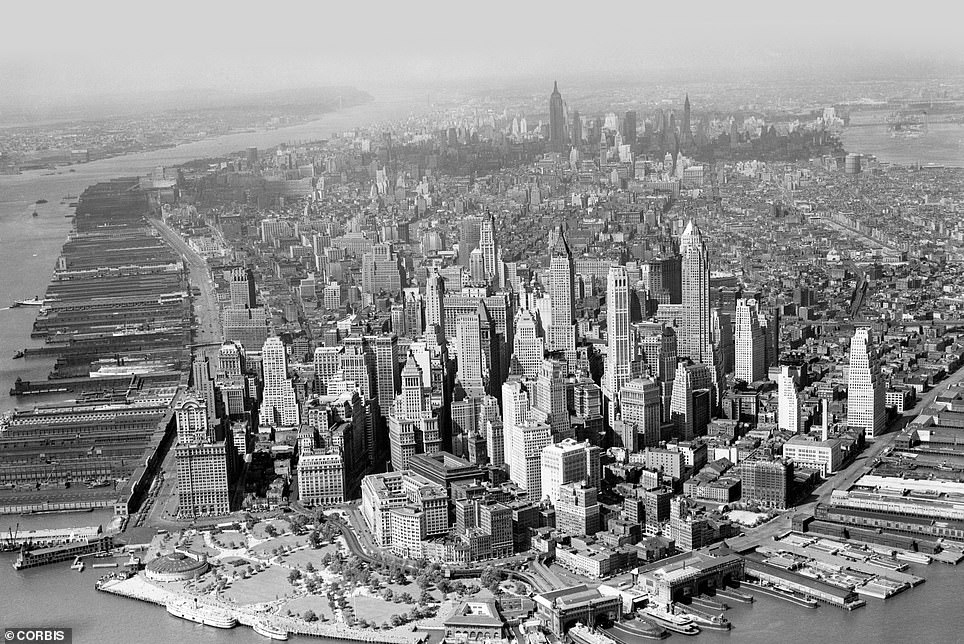 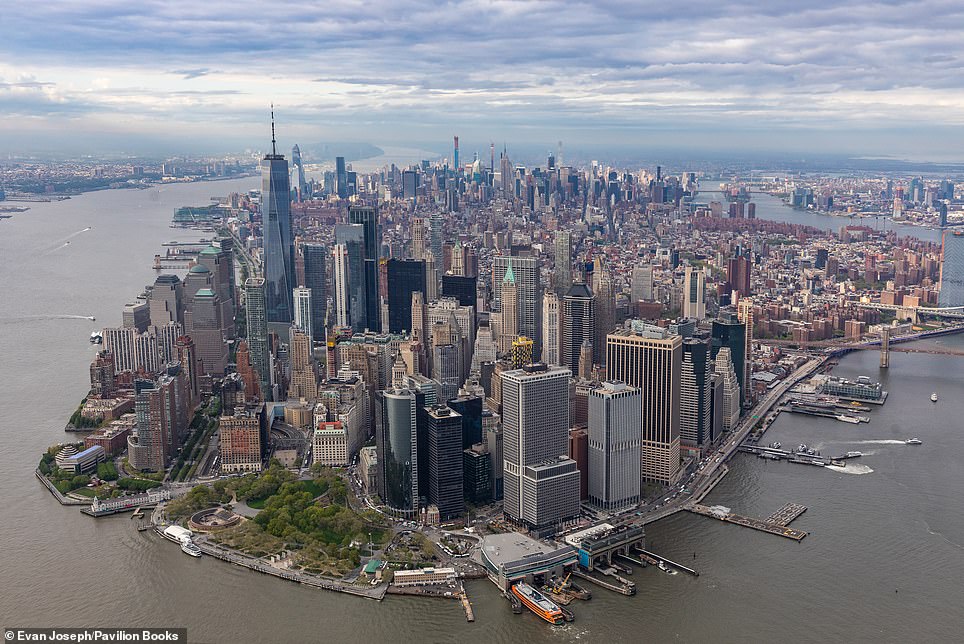 TIP OF MANHATTAN: The picture on the left was taken in 1935 and shows how even back then Manhattan was, in the words of the author, ‘a distinctly massive clump of skyscrapers’. She reveals that some at the time wondered why the weight of the buildings didn’t sink the island. ‘Fortunately,’ she writes, ‘Manhattan’s physical foundation was built on bedrock… formed hundreds of millions of years ago.’ The shoreline seen here ‘is all man’s doing’, with real estate extended since the 17th-century founding of the city by the Dutch using ‘dirt and rocks’. And the ‘wall of piers’ along the Hudson River on the left ‘was a testimony to the prominence of the Port of New York’. Most of the old piers are now parks and other public facilities, we learn, with the book adding: ‘At least one thing on the waterfront is still the same: the orange Staten Island ferryboat was also running in the 1930s photo. The city began the service in 1905’ 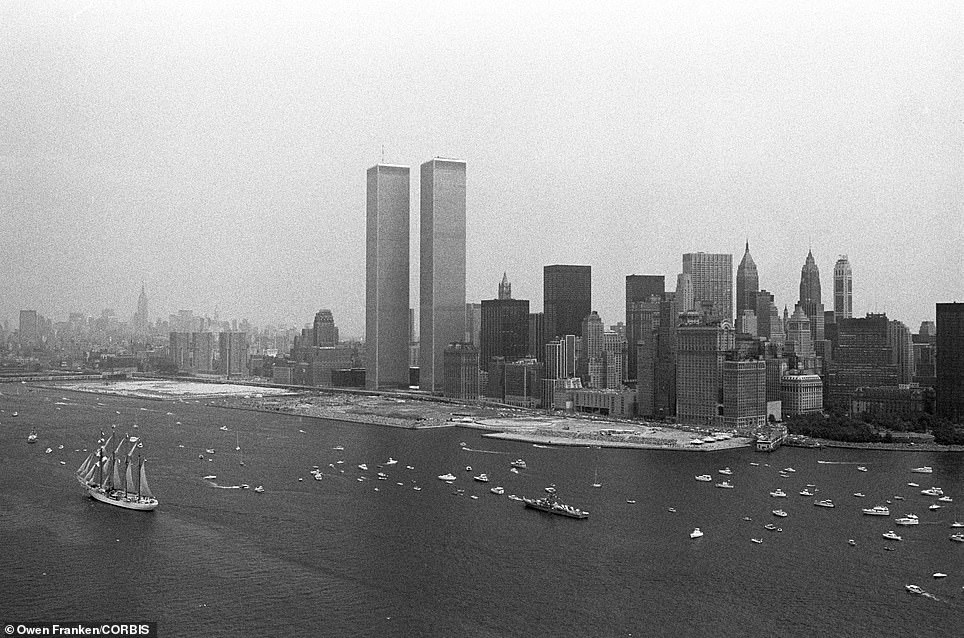 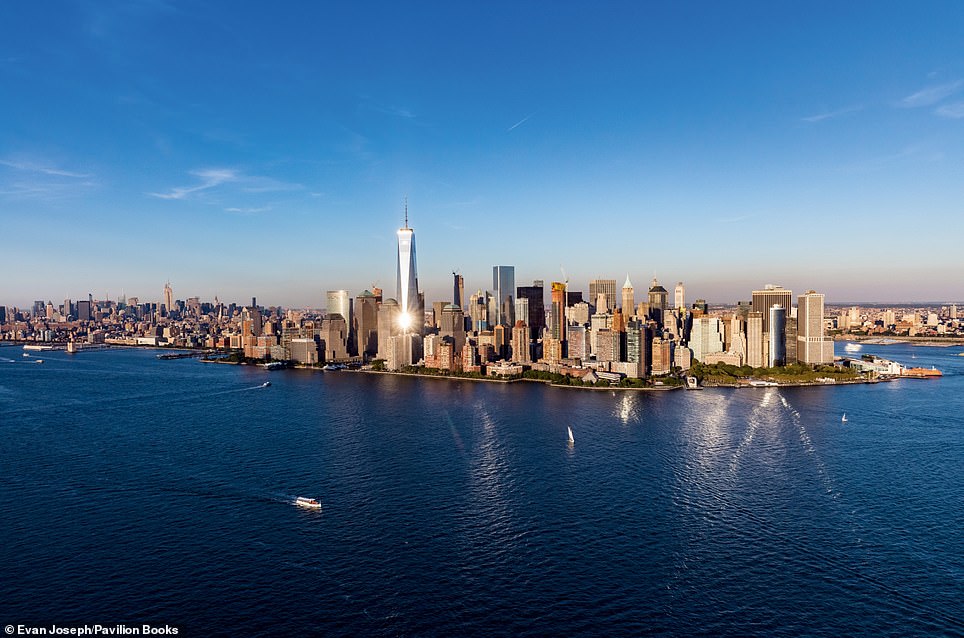 WORLD TRADE CENTER: The image on the left was taken on July 4, 1976, and shows the newly completed World Trade Center Twin Towers, designed by Japanese architect Minoru Yamasaki in 1962, dominating the skyline. When the 110-storey towers opened in 1976 they became the world’s tallest buildings. The book reveals that the flat expanse of land along the shoreline covers 92 acres – and was generated from the excavation for the skyscrapers. The boats in the picture were taking part in the bicentennial Operation Sail celebration, which featured tall ships from around the world. In the modern-day picture on the right, photographer Evan Joseph has caught sunlight bouncing mesmerisingly off the 104-storey, 1,776ft-tall (541m) One World Trade Center, which author Marcia explains was 400ft taller than the Twin Towers and the first building to rise at Ground Zero when it was completed in 2014

MANHATTAN FROM THE BROOKLYN BRIDGE: The image on the left was taken in 1876, when the towers of the under-construction Brooklyn Bridge were the tallest structures in Manhattan, and the year the Manhattan tower was completed. The picture was taken from the top of the tower on the Brooklyn side. Marcia writes: ‘This picture was taken seven years before the span and cables were strung across the river. The Manhattan tower proved more difficult to build [than the Brooklyn tower], as workers had to dig down nearly 85ft under the river before reaching a stable foundation, almost twice the depth as for the Brooklyn tower. This difficult and dangerous work was done in huge, airtight caissons [chambers]. Changing air pressure in these underwater shafts often caused painful cases of the bends, and sometimes death.’ The picture on the right, taken from a helicopter, shows how Manhattan has been completely transformed 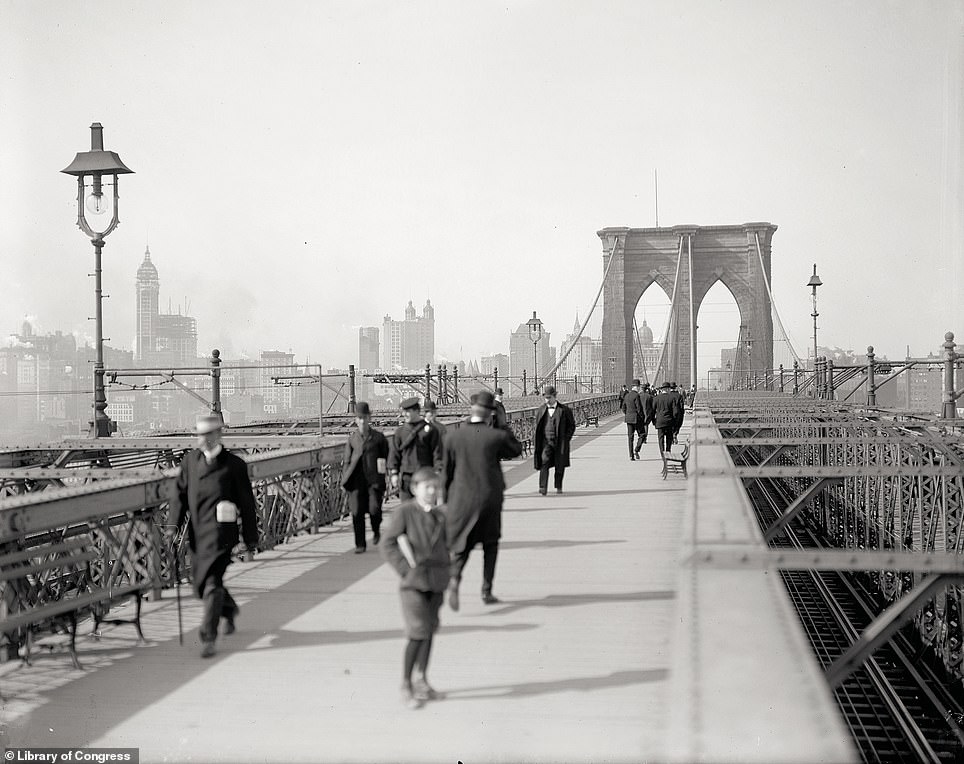 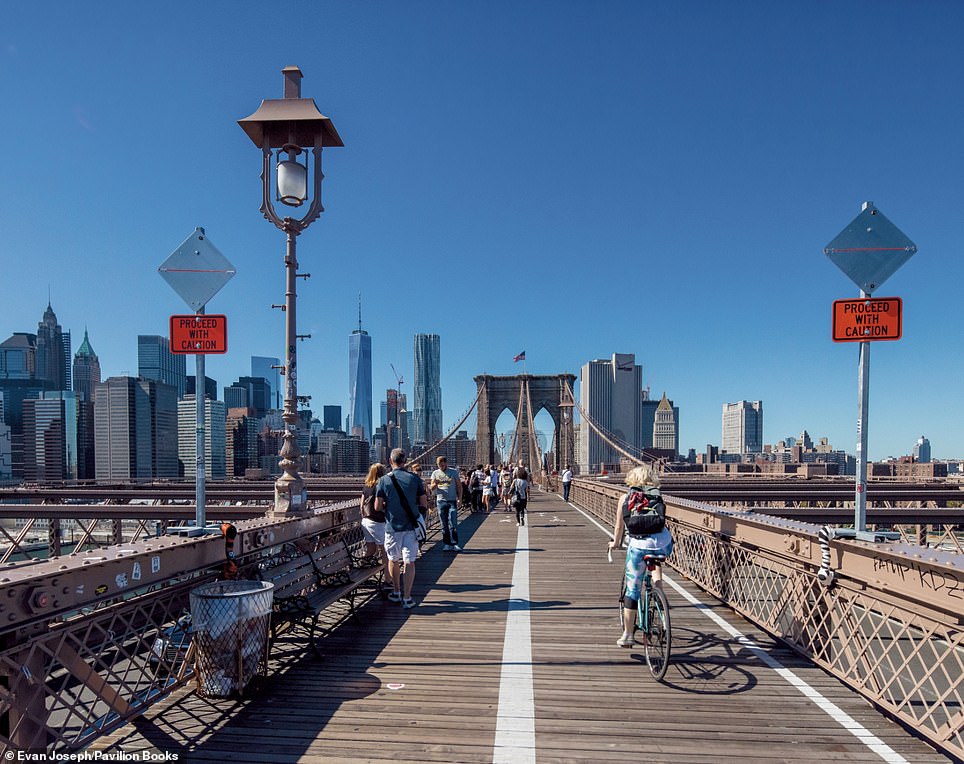 BROOKLYN BRIDGE WALKWAY: A week after the bridge opened in 1883 a woman fell and died on one of the staircases, setting off a stampede that resulted in 12 people being trampled to death and rumours that the bridge wasn’t safe circulating. A year later, impresario P T Barnum marched a herd of 21 elephants over it to demonstrate its strength, the book reveals. To this day, crossing the bridge by foot or bicycle remains one of the most treasured experiences in the city. Marcia writes: ‘The stone arches and powerful cables spun from steel, a material still new in the mid-19th century, remain constants in the city’s ever-changing skyline.’ The image on the left was taken in 1920, the image on the right shows the present-day view towards Manhattan from the walkway 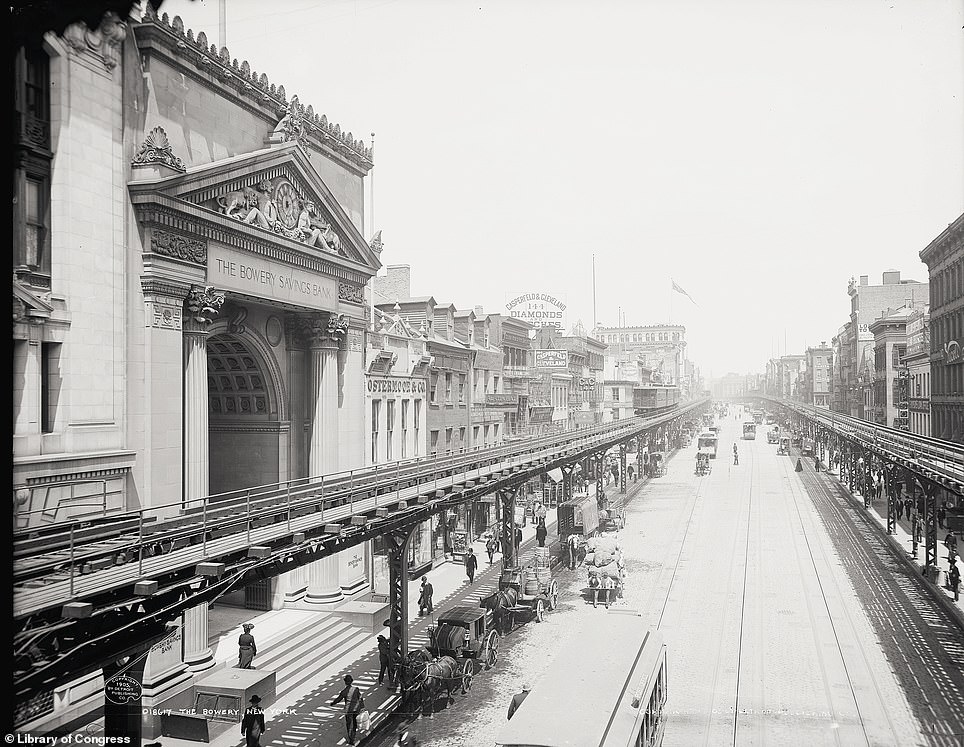 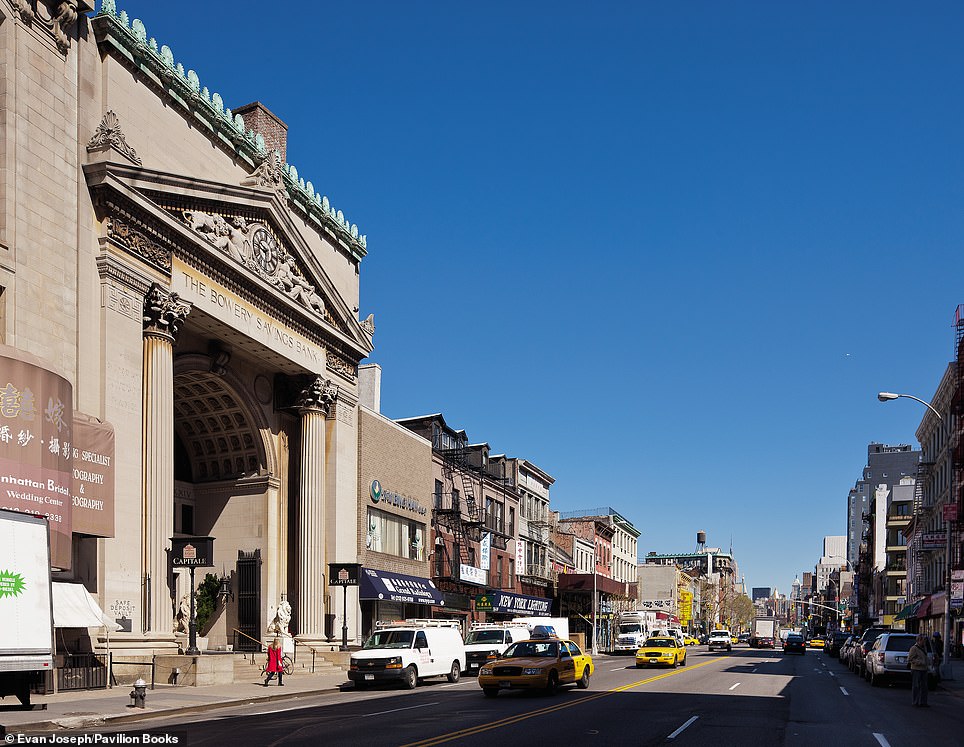 BOWERY SAVINGS BANK: The image on the left was taken in 1905, with Marcia writing: ‘Rising above its surroundings, this splendid building was completed in 1895, a few blocks north of the Manhattan Bridge. Neither the elevated train tracks on the Bowery, erected in 1878, nor the surrounding working-class neighborhood were seen as obstacles to the concept. In the 1920s, the Bowery Savings Bank moved its headquarters to East 42nd Street, but kept a branch in this building until 1982.’ The elevated tracks, she adds, came down in the 1950s 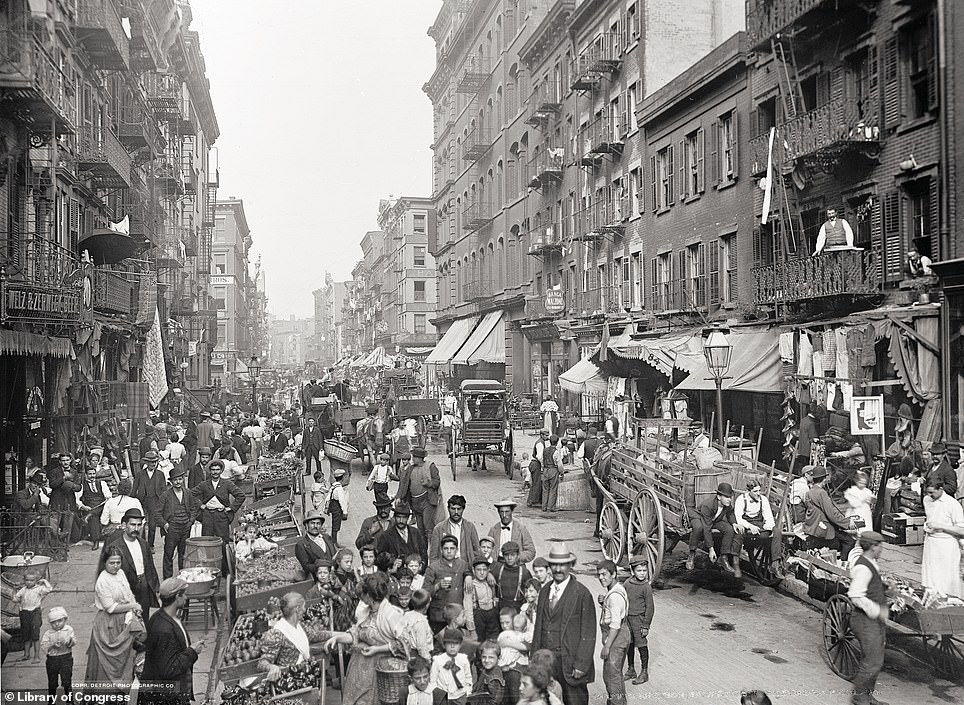 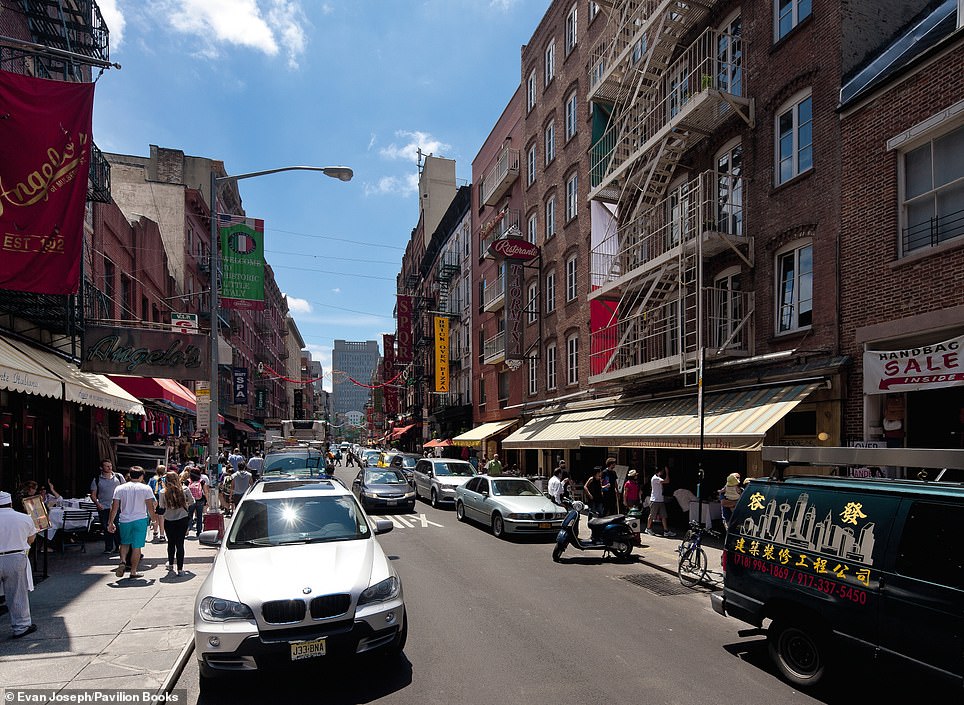 MULBERRY STREET MARKET: The image on the left was taken in 1900, with Marcia writing: ‘Mulberry Street was the heart of Little Italy, the Italian American enclave that rapidly expanded on Manhattan’s Lower East Side in the wake of huge waves of immigration from 1899 to 1910. Fewer than 20,000 Italians lived in the city in 1880. By 1910, there were over half a million, more than in any other American city. They lived in desperately overcrowded tenements, relieved somewhat by outdoor markets.’  She continues: ‘Over the years, as Italians moved to other areas and Chinese immigrants moved in, the Italian section [of Little Italy] shrank to just a few blocks on Mulberry Street alone’ 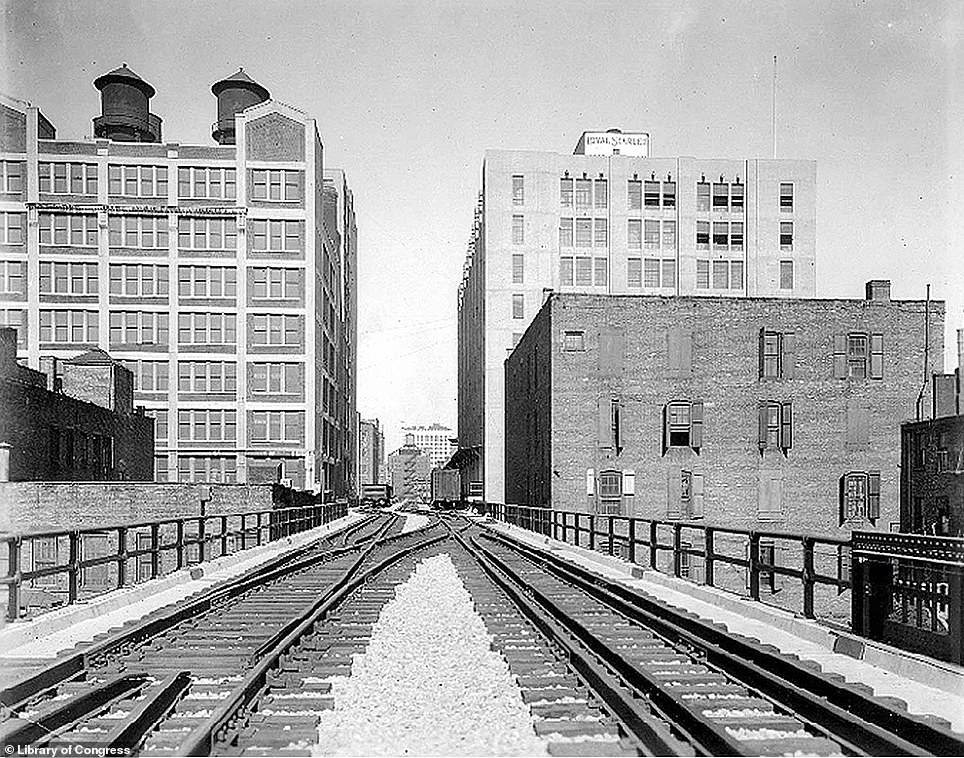 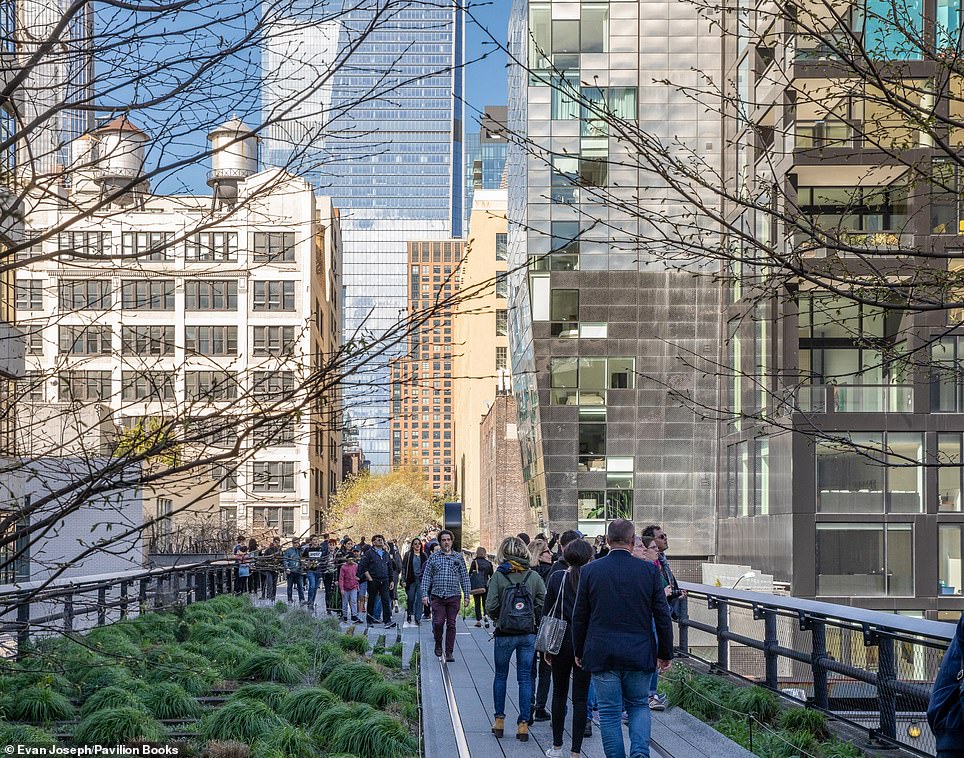 THE HIGH LINE: The image on the left was taken in 1950, with Marcia explaining that this rail freight line ran for a mile and a half ‘through Manhattan’s Lower West Side, snaking around, between, and sometimes right through buildings to deliver milk, meat, vegetables, and raw and manufactured good to factories and warehouses’. She continues: ‘It was built in the 1930s as part of an improvement project to get the freight trains off the streets where they were congesting traffic and causing deadly accidents. When the trains began to run on the High Line, it was hailed as a transformation of the West Side.’ Today, right, the High Line is now a ‘park in the sky’ that has ‘brought about an extraordinary transformation of the former industrial outskirts of the Lower West Side… one completely unexpected in its days as a railway’ 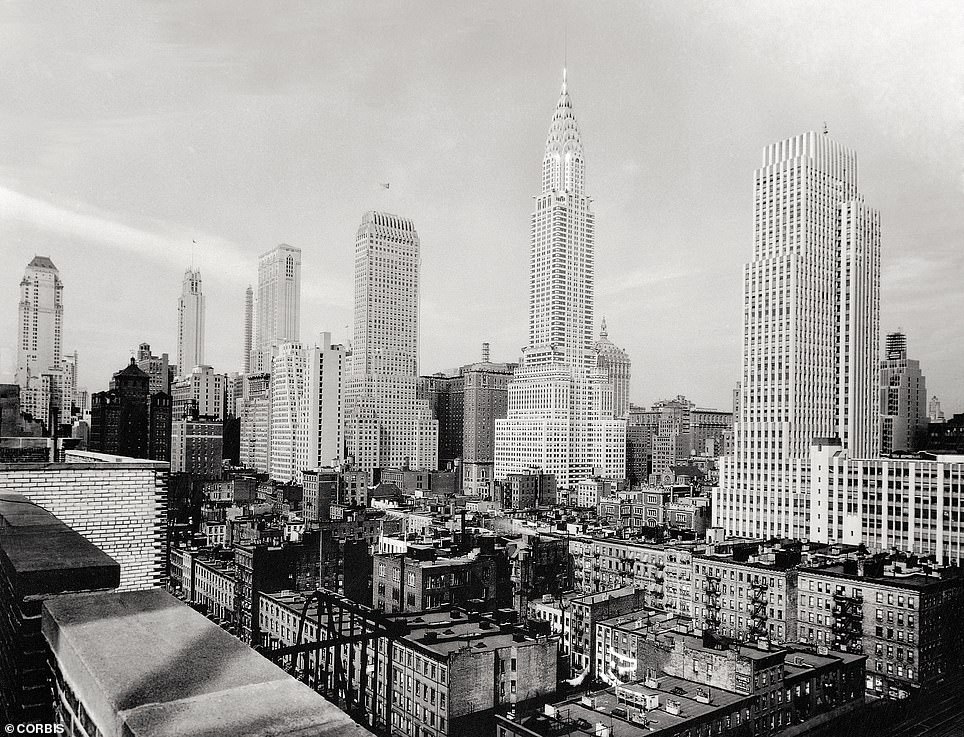 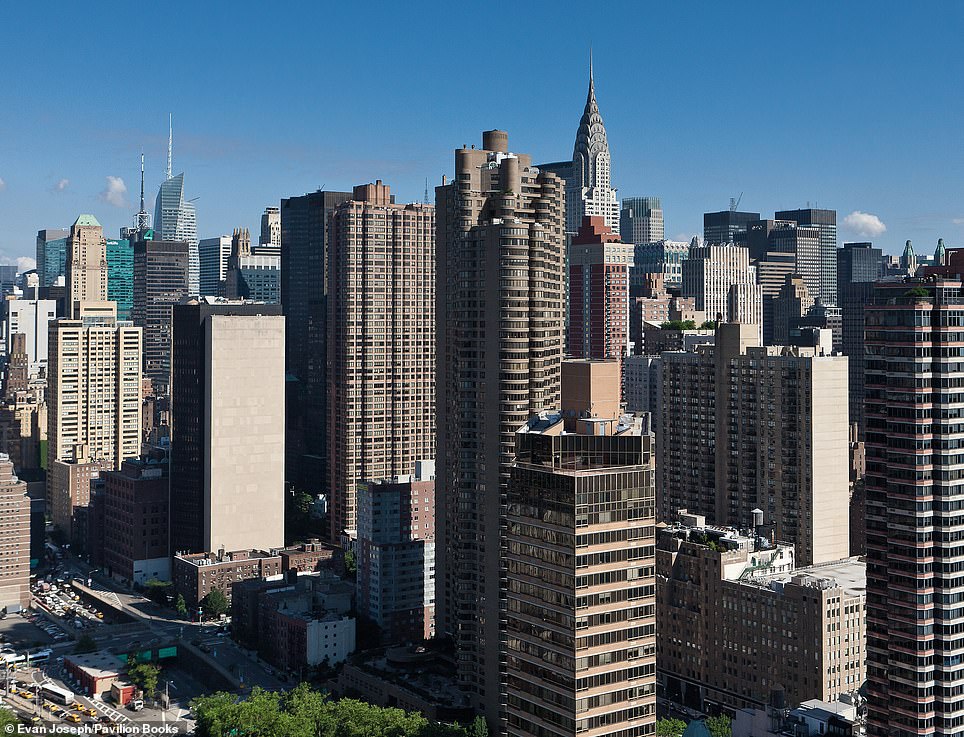 EAST MIDTOWN SKYLINE: Cast your eyes to the left and you’ll see the East Midtown skyline as it was in 1930. The author explains that at this time it was rivalling Wall Street ‘as the skyscraper kingdom’, with the just-completed and ‘unmistakable’ Chrysler Building ‘joining a troop of towers marching up the street’. Today, she writes, ‘the same view is hardly recognizable’. The shot on the right was taken from a helicopter over the FDR Drive 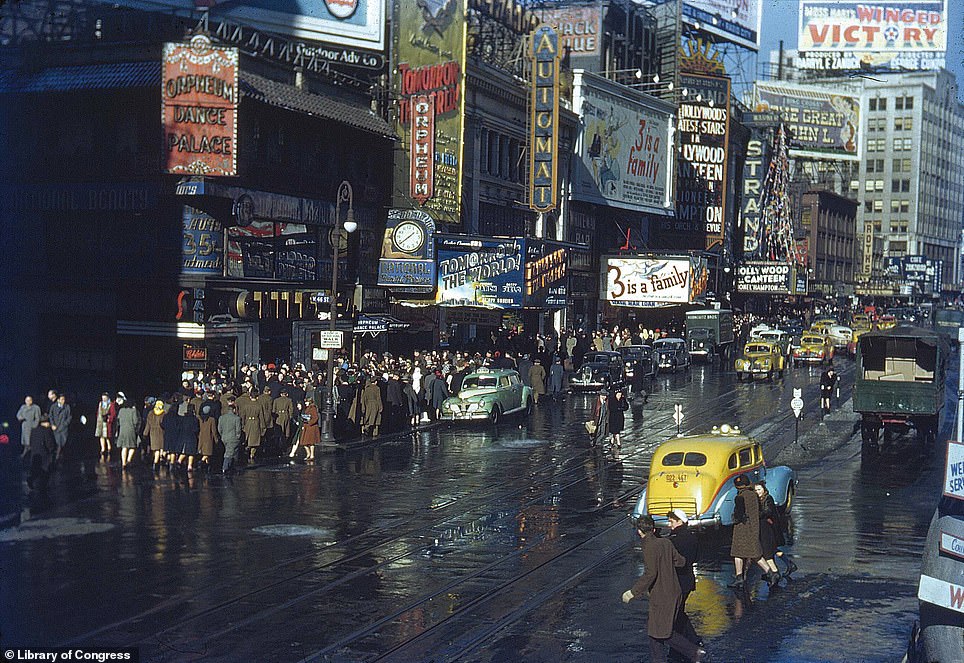 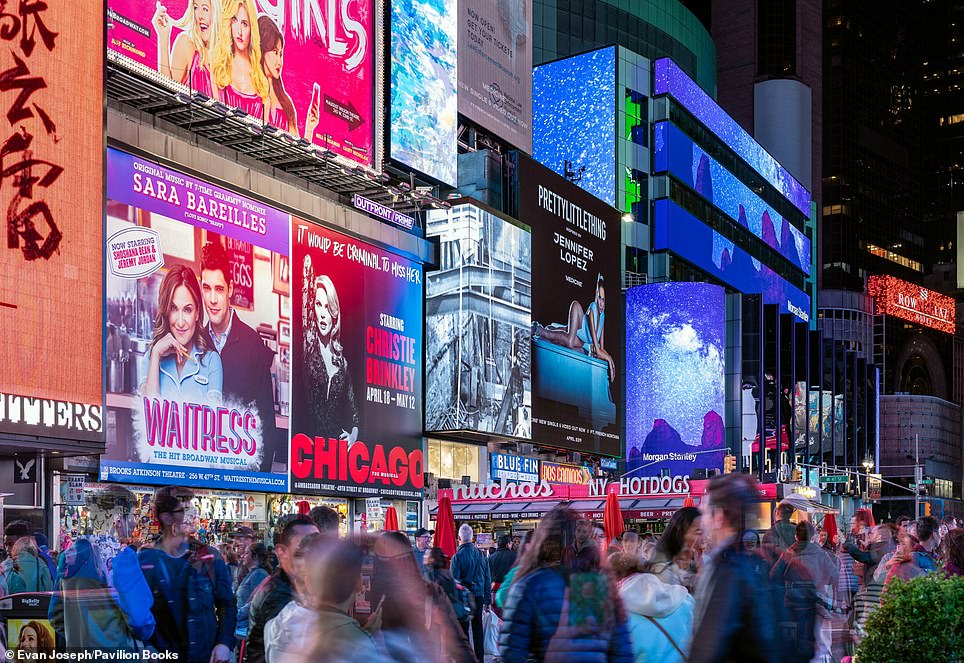 TIMES SQUARE: The photo on the left dates to 1944 and shows U. S servicemen mixed in with the Broadway crowds. Marcia explains that ‘the lights went out at night when Times Square was part of the city’s wartime blackout’ and ‘occasional air-raid drills also cleared the busy streets’.  Soldiers and sailors, we learn, ‘could buy a dance at the Orpheum Dance Palace [on the left]’ and get a meal for less than a dollar at the automat food dispenser in the middle of the block. Today, Broadway is still buzzing, but as Marcia explains, the area had a seedy reputation for a long time. She says: ‘The scene was quite different in the 1960s when prostitutes, drug trafficking and pornographic movies spread throughout the area. The neighborhood finally cast off its squalid past in the 1990s through a major investment of public and private funds that restored the theaters and brought in new office towers, hotels, megastores and family attractions’ 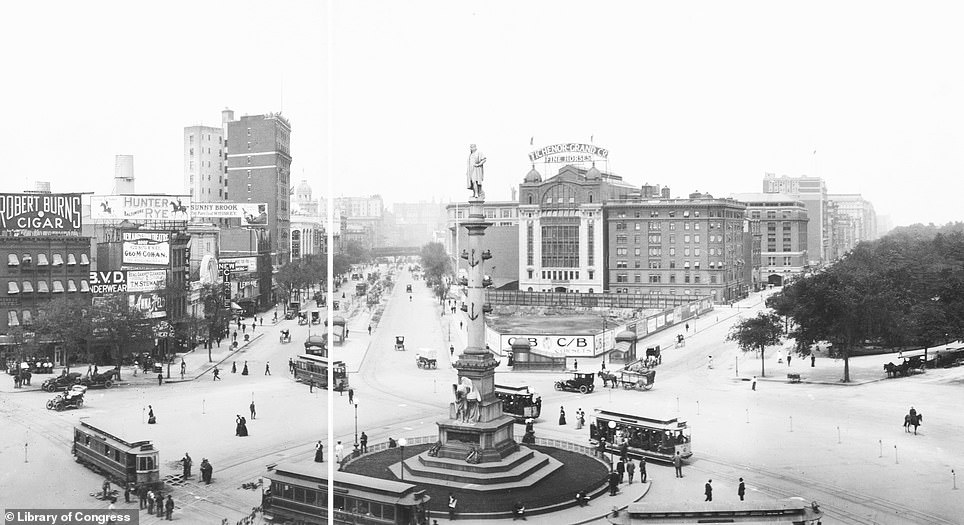 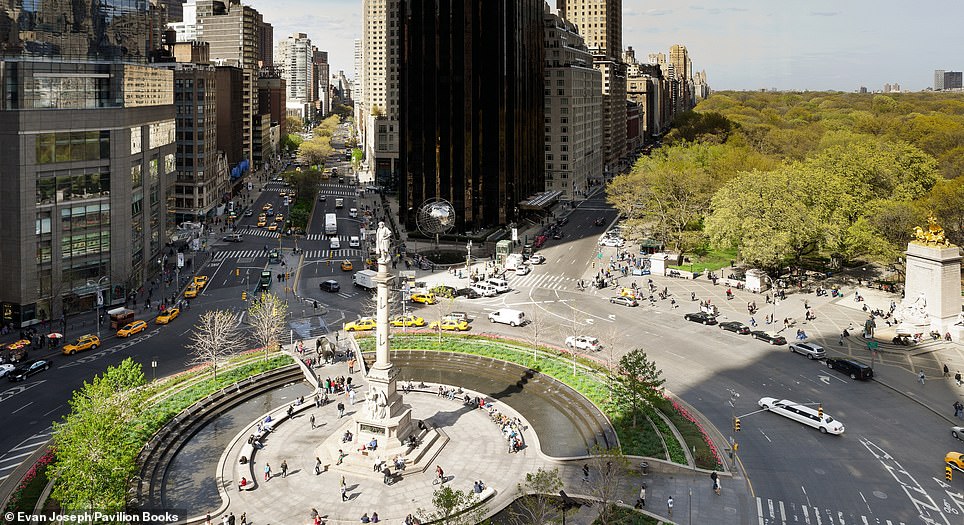 COLUMBUS  CIRCLE: The picture on the left was snapped in 1907, with Marcia revealing that the intersection became Columbus Circle on October 12, 1892, to mark the 400th anniversary of Columbus landing in the New World. The statue was added two years later. Today, everything in this view ‘is dramatically different’, with ‘towering buildings lining all of the streets leading to the circle’. The tower at the apex of Broadway and Central Park West is the Trump International Hotel and Tower. Marcia explains that the towers at 15 Central Park West, behind the Trump building, opened in 2007 as the city’s most expensive housing development. The land alone, she reveals, sold for a record-breaking $401million 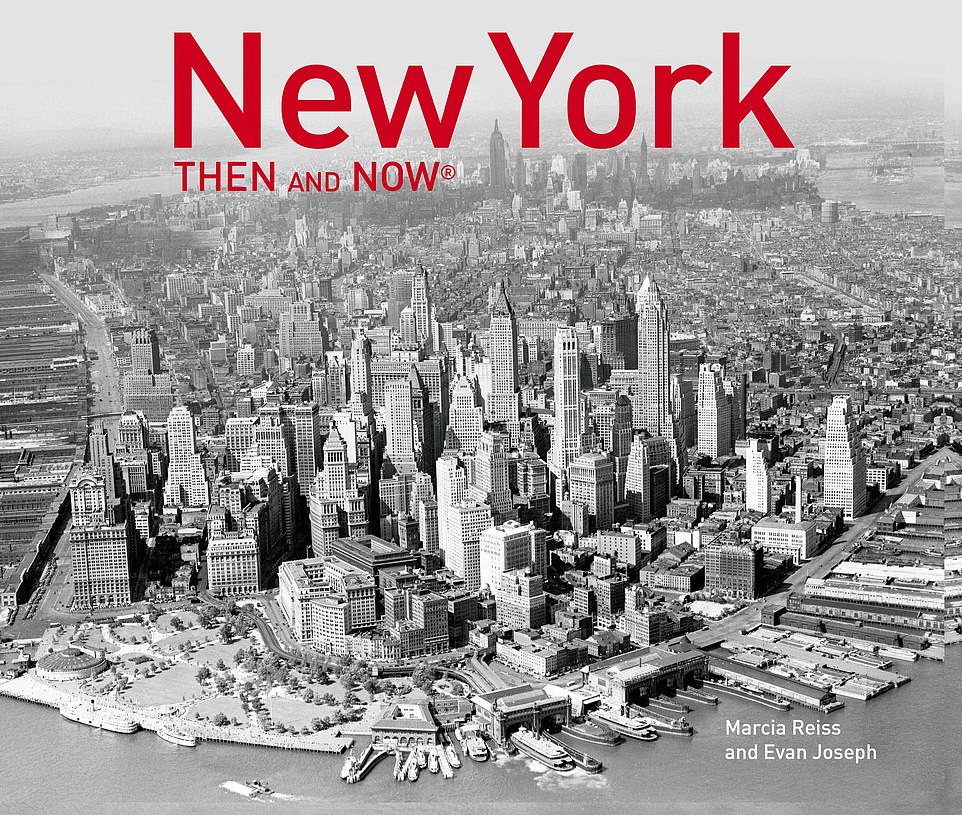 New York – Then and Now by Marcia Reiss and with photography by Evan Joseph is published by Pavilion, priced $19.95

How long will masks be required on planes? Flight attendants say mandate should be extended