Museum dedicated to SLIME opens in New York City, with a sticky barefoot ‘lake walk’, a glow-in-the-dark cove and a DIY bar where you can make your own

Slime, the bedazzled, stretchy sensation that has spawned its own social media influencers and fans of all ages, is taking up residence in New York City.

An immersive, 8,000-square-foot (743.22-sq-meter) museum dedicated to all things slime opens Friday for a nearly six-month celebration complete with a sticky barefoot lake walk and DIY slime bar. There’s also the opportunity to don goggles and a poncho and get doused in the stuff that has a big following but a questionable impact when it comes to disposal and the environment.

The brainchild of Karen Robinovitz, Sara Schiller and Toni Ko, the so-called Sloomoo Institute is the latest in Instagram-friendly pop-ups (hello ‘Friends’ 25th anniversary and Museum of Ice Cream) to hit New York and then travel to other locales. Why Sloomoo? There’s a thing in the slime community where you replace the vowels in your name with ‘oo,’ so slime = sloomoo. 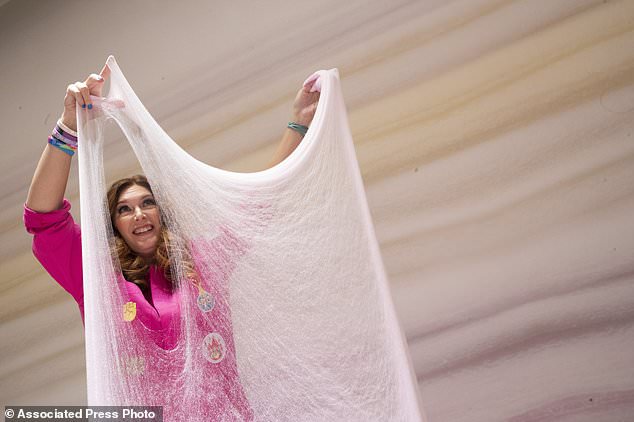 The idea of this ‘sensory playground’, the co-founders said during a pre-opening tour, is simple: To spread slime’s powers of rejuvenation and relaxation. Skeptical? There’s a nook with an EEG machine to actually show your brain on slime.

‘The social media aspect of slime has really shown community,’ Robinovitz said. ‘There’s a lot of sensibility in the world that social media can isolate people. What we’ve seen in the slime world is that people are coming together.’ 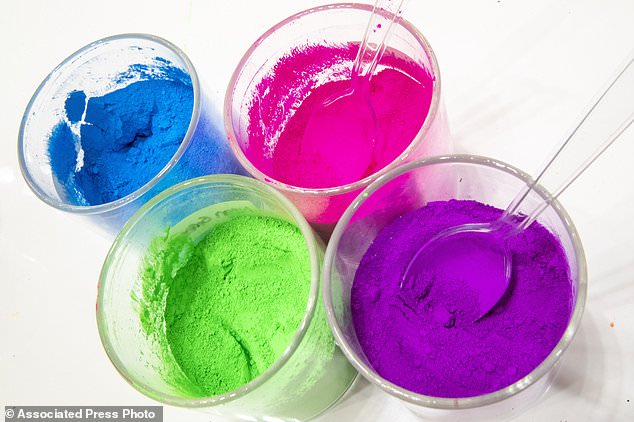 This photo shows pigments available in the build-a-slime bar

There are slime conventions, online shops and meet-and-greets with top influencers that draw thousands of fans at a time.

Nichole Jackylne, 23, of Grand Rapids, Michigan, is a top slimer enlisted by Sloomoo. She’s been on YouTube since 2013, taking on fashion and other content before she settled on slime nearly three years ago.

‘I found out how to make slime on Pinterest and just went from there,’ Jackylne said as she sat in the museum’s front window with a huge tub of pink slime on her lap, rows of Elmer’s glue gallon jugs on shelves behind her. ‘I never thought, even for a million years, that I would be making a living off slime.’ 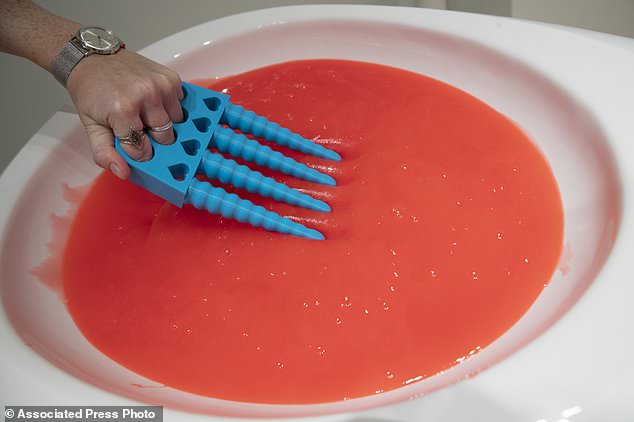 Jackylne brings in between $5,000 and $10,000 a month from merchandise and slime-making supplies she sells online. That doesn’t take into account her YouTube ad income and partnerships. She has nearly a million followers on YouTube.

‘I consider myself more of a slime lifestyle personality,’ Jackylne said. ‘I don’t just post slime. I try to keep it about my personality, so I’ll film blogs of myself shopping for slime supplies or just out in the public making slime content.’

Not exclusively solid or liquid, slime is often made – to the bane of germophobes and neatnik parents – by mixing the mineral-based cleaning product Borax, glue and water, along with liquid scents, coloring and ‘toppings’ that are all the rage, including tiny toys and plastic-based glitter. Some variations are made with clay.

The varieties and scents are endless. Noting glitter and other potential eco-foes were deliberately left out of Sloomoo’s slime, Robinovitz showed off varieties that pull like weightless clouds (fake snow is mixed in), crackle because of plastic beads inside or shine with a high gloss and a tough pull.

At the DIY bar, where eight ounces of slime is included in the $38 base ticket price, scents include banana cream pie, Froot Loops and prickly pear. The get-slimed experience is $30 extra.

Hand wipes are liberally distributed throughout Sloomoo with the plea that people use them before and after touching the huge bowls of slime placed along a walking route. The slime will be changed throughout each day.

‘I do but it’s inevitable sometimes,’ she laughed as she and her oldest daughter, Iyanna, peaked into Sloomoo’s window as Jackylne stretched and twirled her creation. ‘We make it different ways, with stuff out of your cupboard, from flour to Vaseline. But I don’t do Play-Doh, because Play-Doh gets stuck. The slime doesn’t really get stuck on anything.’ 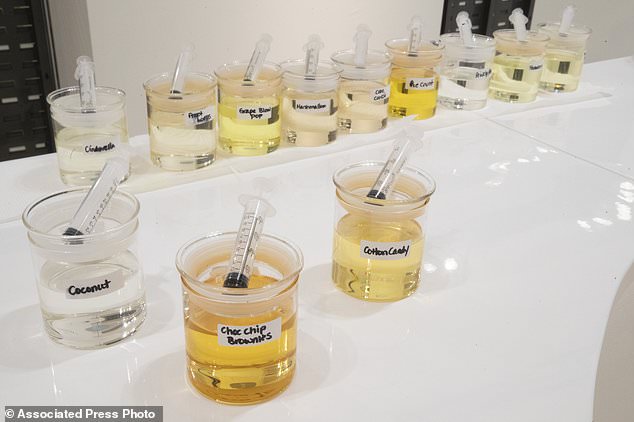 Various scents are available in the build-a-slime bar

Technically speaking, slime is a cross-linked polymer scientifically known as a ‘non-Newtonian fluid’. Its history stretches back to the 1830s, when polymer science was born and Nathaniel Hayward and Friedrich Ludersdorf concluded that adding sulfur to raw, natural rubber prevented it from getting sticky.

As toys, and in TV and film, slime has been a part of the cultural landscape for decades.

Silly Putty went to the moon on Apollo 8 in 1968. The 1962 movie ‘Son of Flubber’ starred goopy slime that could fly and spawned a toy product called Flubber, but it made people sick and was yanked from the market, according to a timeline on two walls at Sloomoo. 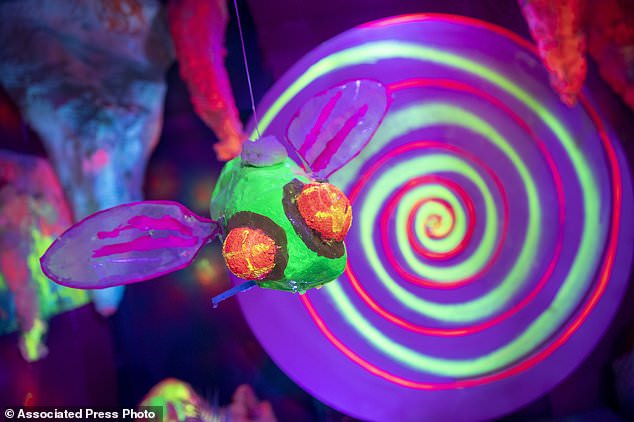 A detail of Sloomoo’s cove. The museum opens Friday for a nearly six-month celebration before hitting the road to other locales 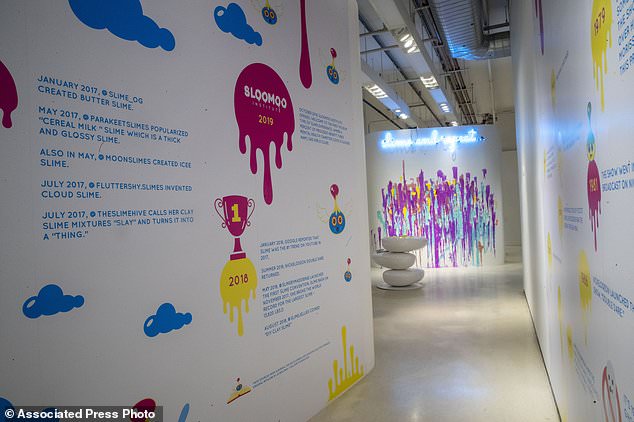 A timeline of the history of slime. Technically speaking, slime is a cross-linked polymer scientifically known as a ‘non-Newtonian fluid’

Mattel launched a jiggly slime as a toy in 1976. It came in a plastic garbage can.

Nickelodeon has been all-in on slime for years, since it rebroadcast a Canadian show, You Can’t Do That On Television, starting in the 1980s.

The show slimed participants who answered questions with ‘I don’t know’. The network launched its own slimy show, Double Dare, in 1986 and has been sliming celebrity winners of its Kids’ Choice Awards since 1987.

In 2014, slime videos from Thailand spread around the globe and the DIY slime phenomenon took off, particularly among young girls.

‘When Nichole Jackylne does events there are girls lined up to meet her,’ Robinovitz said, ‘because they love her slime and they love what she stands for, which is truly representing joy.’

The Sloomoo Institute is at 475 Broadway between Broome and Grand Streets and will be open daily from 10am to 10pm.

De-escalation in Spain: An update on Barcelona – A Luxury Travel Blog