A spooky aircraft wreck, mist-wrapped ruins and beautiful castles: The amazing images that wowed the judges in the Historic Photographer of The Year 2019 contest

Ancient timbered houses in York, an eerie wreck of a military aircraft in Iceland and the ruins of Dorset’s Corfe Castle shrouded in mist.

These are some of the mesmerising scenes that have been captured in photographs commended in the third Historic Photographer of the Year Awards. And there are plenty more amazing images that caught the judges eyes, as we reveal here.

Entries were judged on originality, composition and technical proficiency alongside the story behind the submission and its historical impact. The judging panel of experts included broadcaster and historian Dan Snow.

Snow said: ‘When it comes to evocative, breath-taking imagery that makes you truly consider the world around you, historic and cultural photography is hard to beat. The wonderful entries we’ve seen in this year’s awards highlight everything from the haunting remains of the Normandy beaches to astonishing shots of ancient forts and exceptional imagery from a lost industrial past. It reminds people that exploring history is an adventure, where you stumble across decaying remnants of the past and remember the incredible stories that took place all around us.’

The overall winner was an ‘outstanding image’ of the ruins of the Arromanches’ Mulberry Harbour in Normandy, shot by Stéphane Hurel. The Historic England category was won by JP Appleton and his haunting picture of the Victorian era Roker Pier in Sunderland. 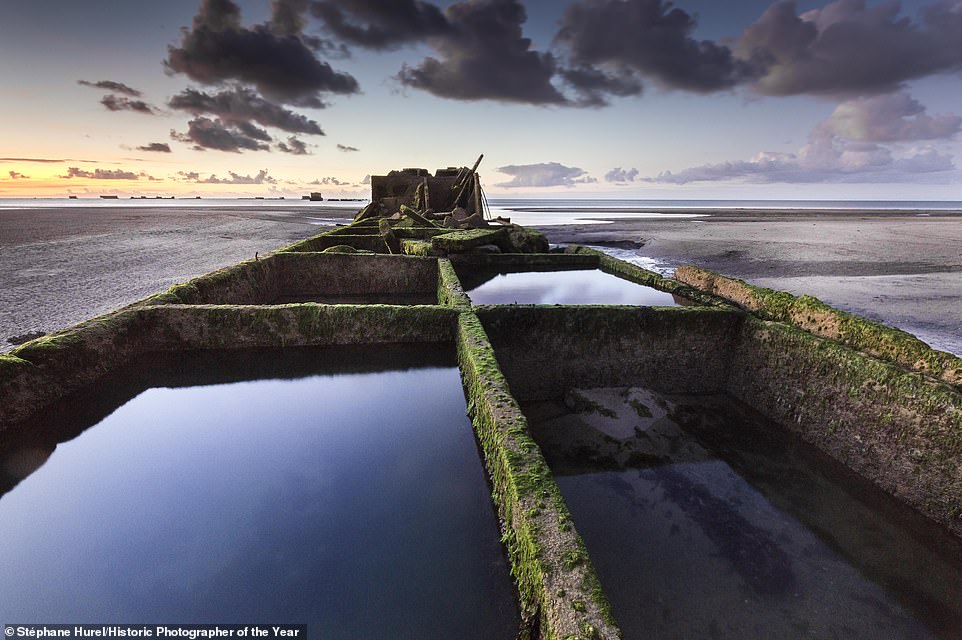 This shot of Arromanches’ Mulberry Harbour by Stéphane Hurel was declared the overall winner. He said: ‘In September, during the tides of the equinox, it is possible to reach the dykes of the artificial harbour of Arromanches (imagined by Churchill in 1944 to save Europe from Nazism) on foot. I shot the picture at the end of the summer with its warm lights at the time of the day called golden hour’ 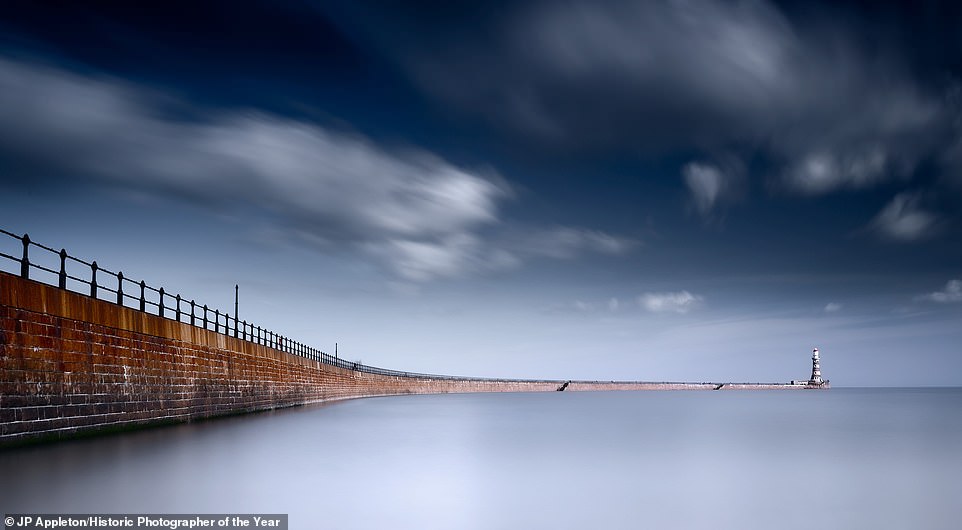 The Historic England category was won by JP Appleton and this haunting shot of the Victorian-era Roker Pier in Sunderland. He explained: ‘This shot was taken on a trip to the North East. I have seen many images of this splendid structure but I wanted to capture something a little different’ 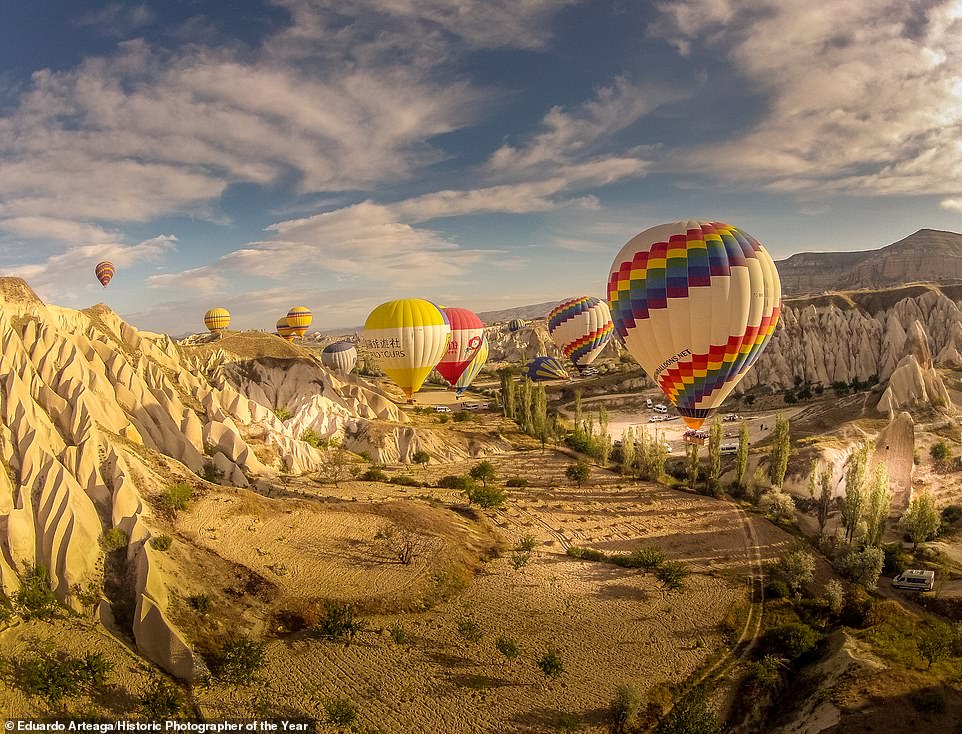 One of the shortlisted images is this one, by Eduardo Artega, which shows hot air balloons in the Cappadocia region of Turkey 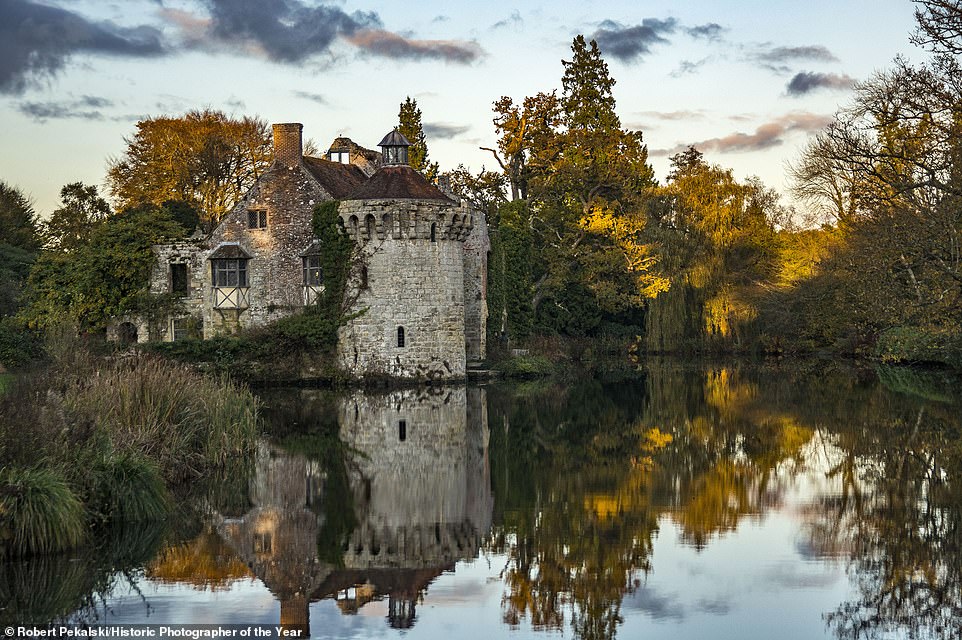 This stunning image was snapped by Robert Pekalski and shows Scotney Castle – a beautiful 14th-century moated building in Kent. It was shortlisted by the judges 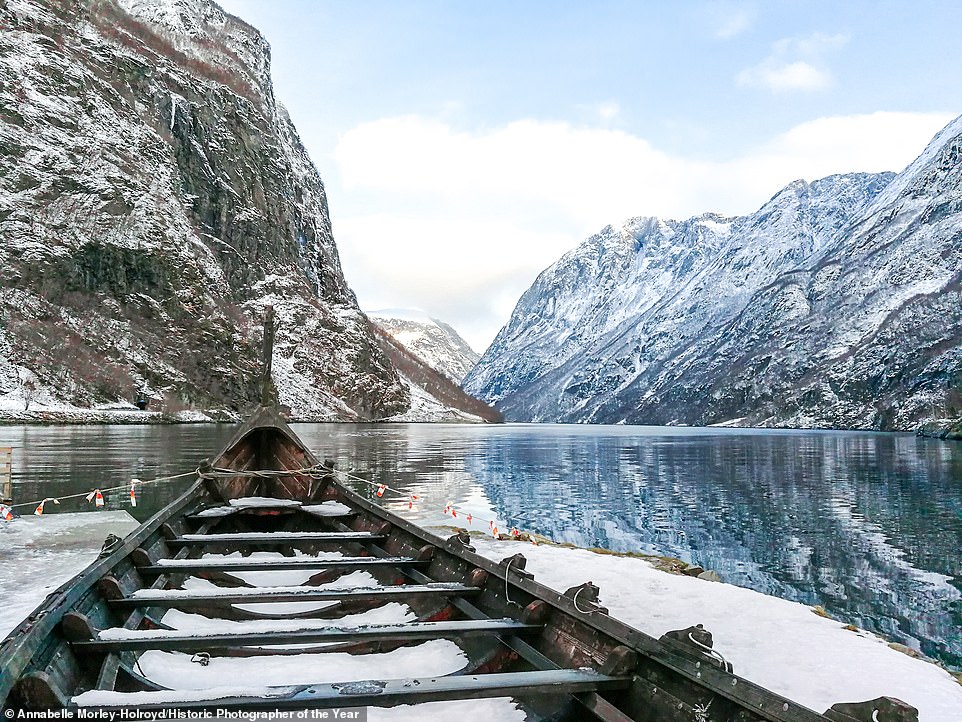 Photographer Annabelle Morley-Holroyd captured this amazing shot of Norway’s 11-mile-long Naeroyfjord, a Unesco world heritage site, from the banks of the village of Gudvangen 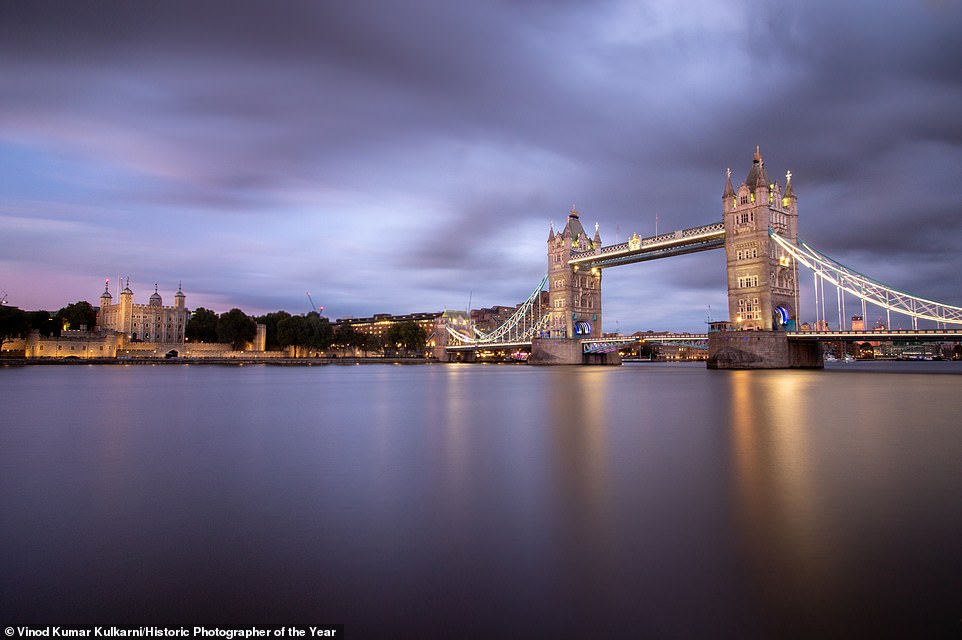 This majestic shot of London’s Tower Bridge was snapped by Vinod Kumar Kulkarni. He said: ‘Tower Bridge is the most iconic building in the world. Hence, most of the travellers visiting London will visit this monument. The most interesting part of this bridge is that the road between the towers can split into two equal bascules or leaves, which can be raised to allow river traffic to pass’ 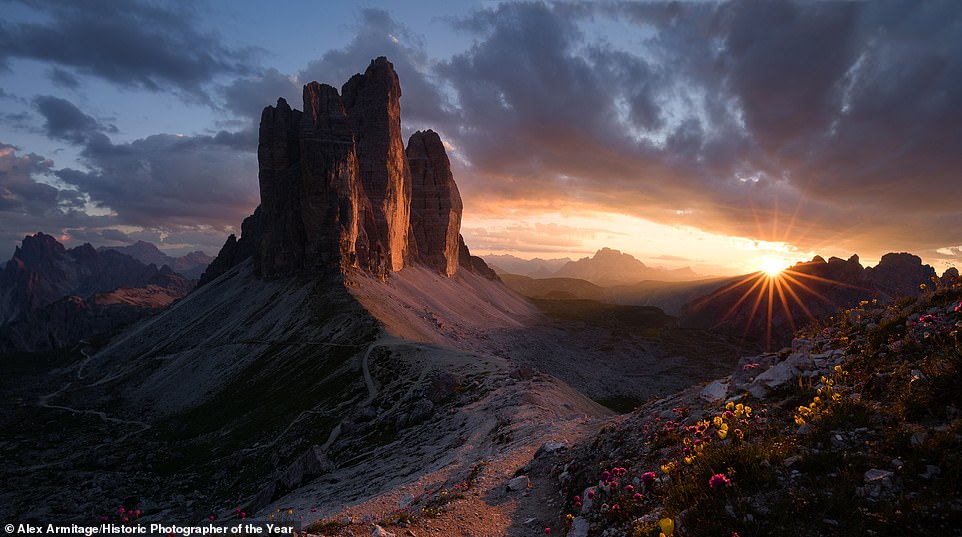 The stunning Tre Cime di Lavaredo in the Italian Dolomites captured by photographer Alex Armitage. He said: ‘Tre Cime di Lavaredo is littered with historic bunkers, ruins, and tunnels used during World War I by Italy and the Austro-Hungarian armies. The Dolomites became a battleground. Known as a “war within a war”, soldiers not only had to survive their opposition but also the extreme conditions at such altitudes. Directly behind where this photo was taken is a multi-layer bunker still accessible today. I would love to share those photos that accompany this one if ever possible’ 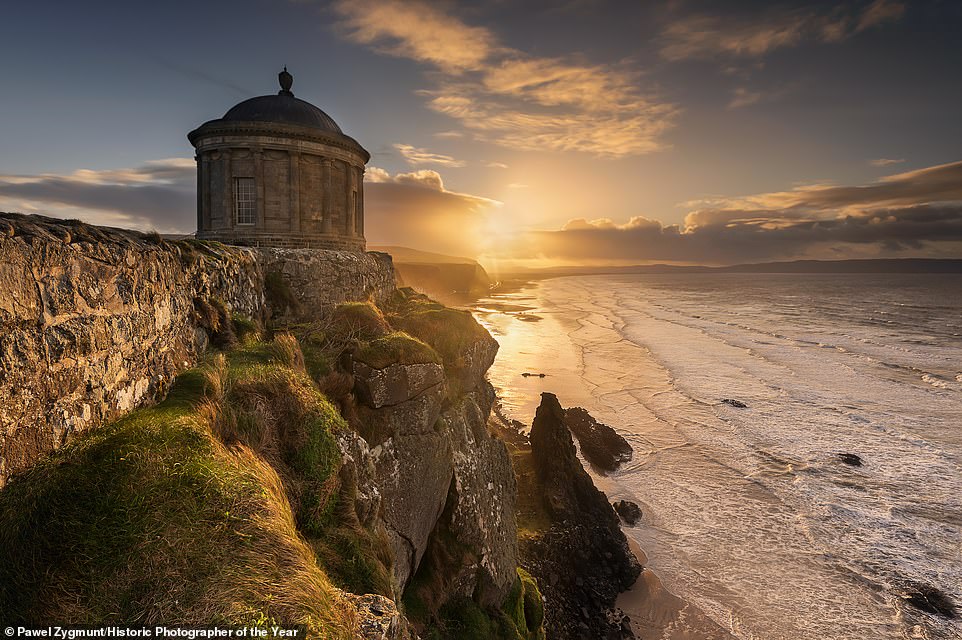 The Musseden Temple in Northern Ireland is bathed in the setting sunshine in an amazing image by Pawel Zygmunt. He said: ‘It was a bit tricky to shoot towards the sun but a few clouds arrived and dimmed it a bit. Downhill Beach looks absolutely gorgeous in setting sun and it was enjoyable to stand there and watch this magical scene. It was too windy for long exposure but I think it wasn’t necessary as waves on the ocean looked brilliant captured with a fast shutter speed’ 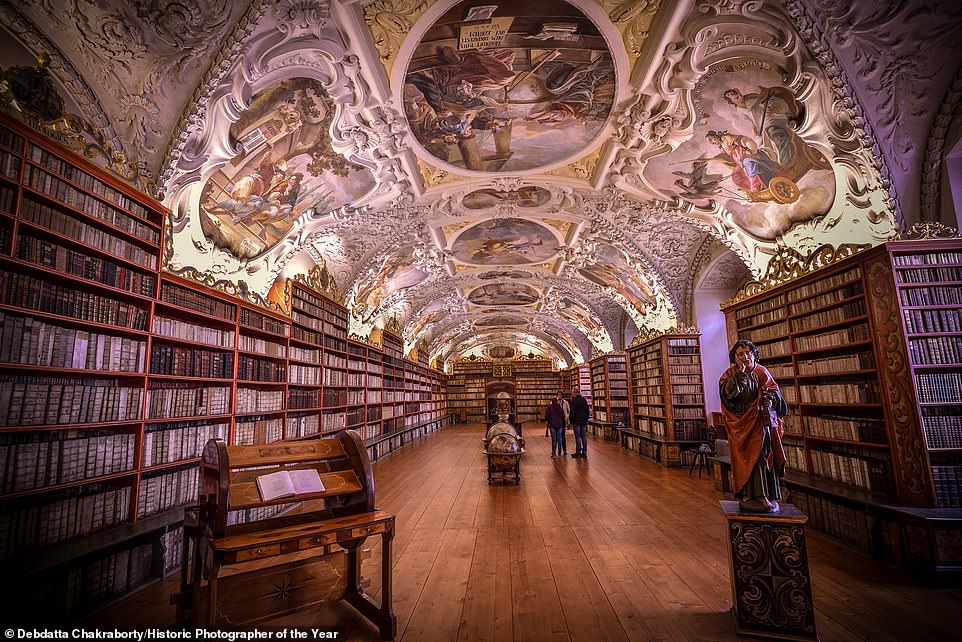 This stunning image of the Strahov Monastery library in Prague by Debdatta Chakraborty was shortlisted. Strahov Monastery is a Premonstratensian abbey founded in 1143 by Jindřich Zdík, Bishop John of Prague, and Vladislaus II, Duke of Bohemia 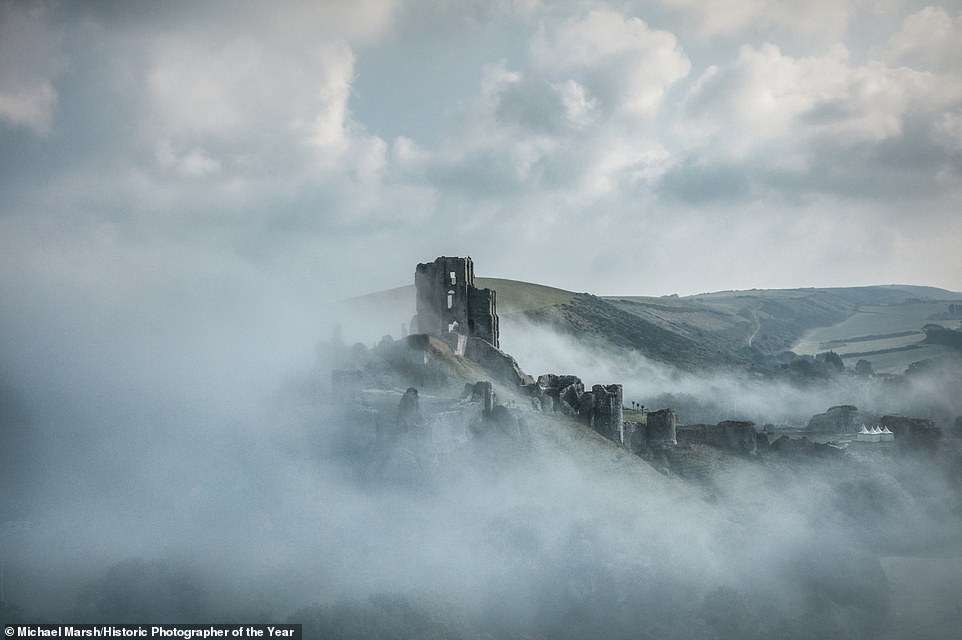 This eerie image shows Corfe Castle in Dorset shrouded in fog. The picture was taken by photographer Michael Marsh and was commended by the judges 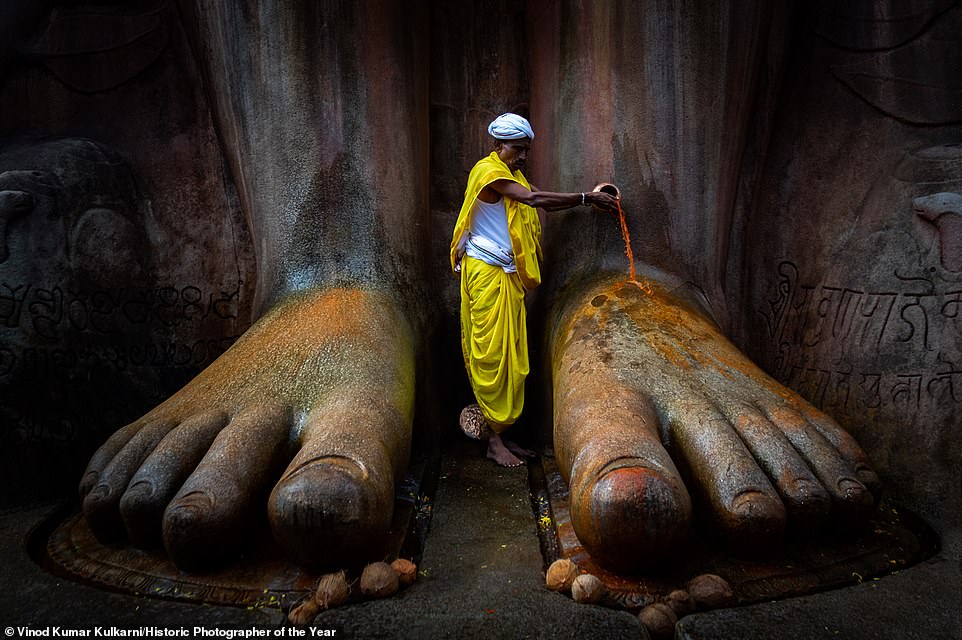 Vinod Kumar Kulkarni captured his unusual scene at the Shravanabelagola Temple in India. He said: ‘Rituals are in the centre of everything we do, the way we live and it is something which we should continue following. It is our responsibility to pass on our culture and all the rituals to the next generation so that it can live for many more years to come. This was shot in the small town of Shravanabelagola in Karnataka, where thousands of devotees, especially from the Jain religion, come every month to offer their prayers to Lord Bahubhali’ 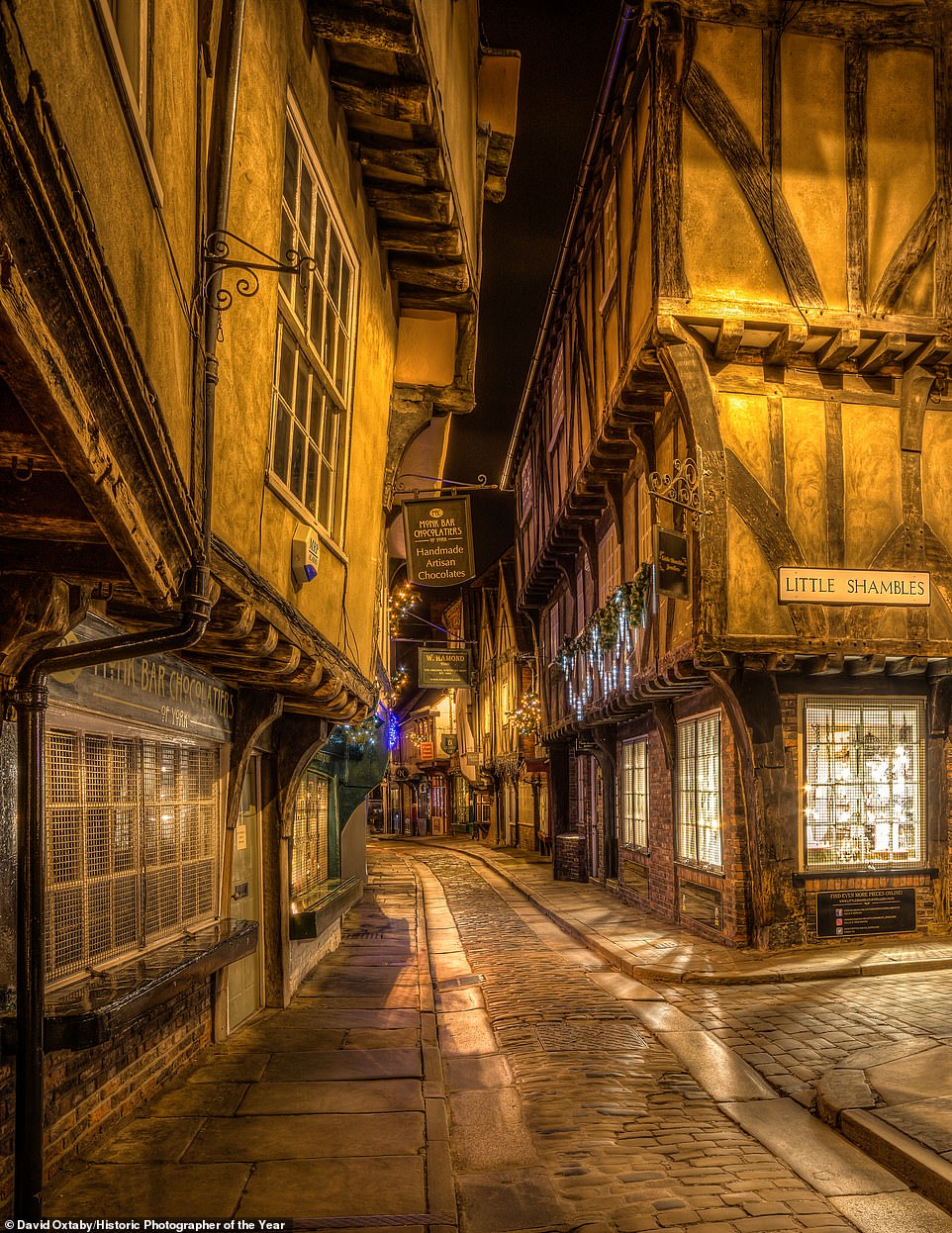 David Oxtaby was commended by the judges for this shot of the historic Shambles in the heart of the city of York. He said: ‘Although mentioned in the Domesday Book most of the buildings date back to the 14th and 15th century and mainly comprised butchers until the late 19th century. It is one of the most-visited parts of York’ 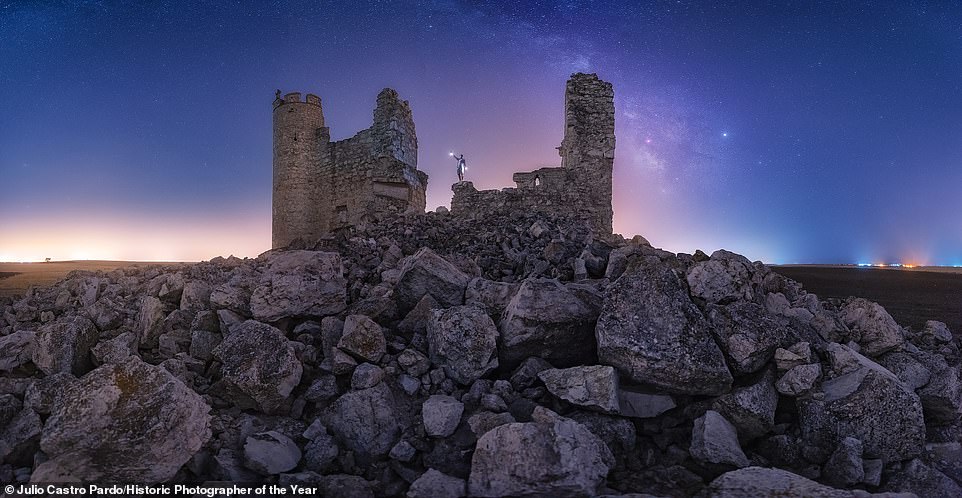 The ruins of Caudilla near Toledo in Spain were captured by photographer Julio Castro Pardo, who describes it as an ‘architectural jewel’. The castle dates back to 1450AD and now lies abandoned 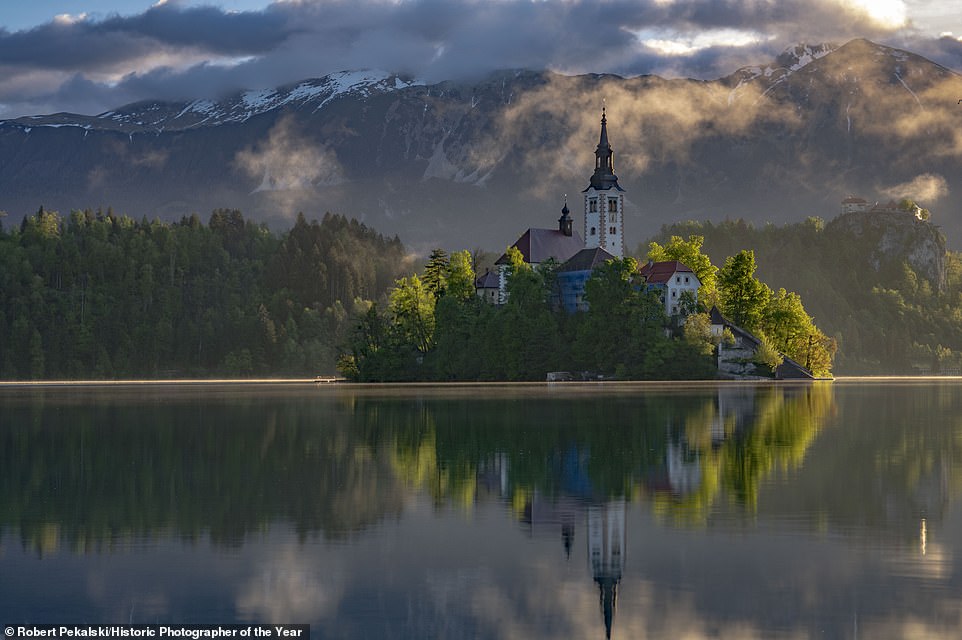 This amazing image shows the Church of Mary, which is located on an island in the middle of Lake Bled in Slovenia. The reflective shot was captured by photographer Robert Pekalski 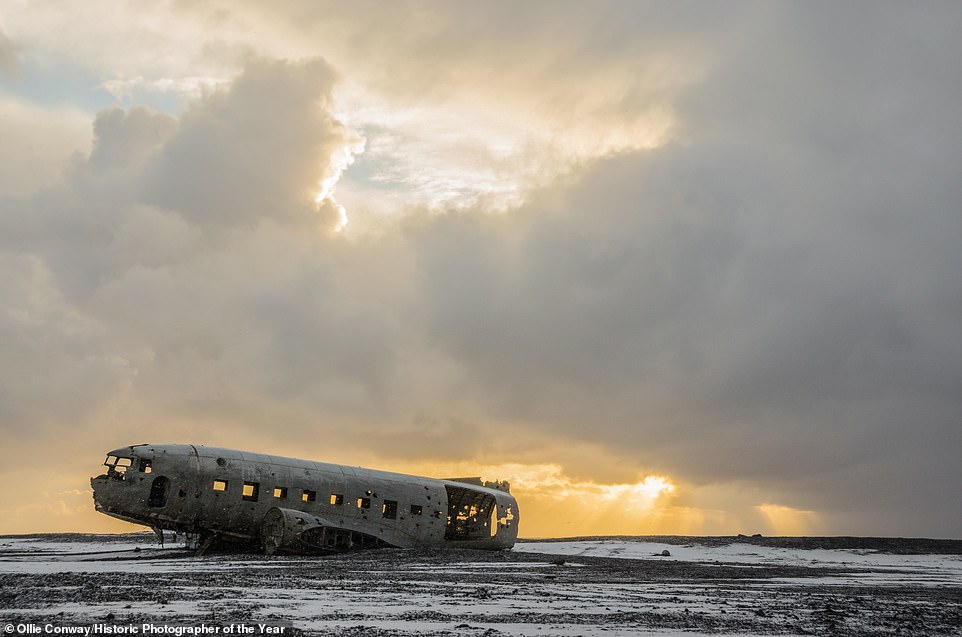 Ollie Conway travelled to Iceland in order to snap this image of an American military plane that had crashed in 1973. Ollie explained: ‘A visit to this aircraft crash site was one of the main reasons for a photography trip to Iceland. In November 1973 a United States Navy Douglas R4D-8 (Super DC-3) crash-landed on the black volcanic beaches of southern Iceland. Luckily all on board survived. As a pilot myself, I find every aspect of this historic event intriguing. What would they have been thinking as they were forced to land? After surviving the landing, what were they feeling as they contemplated their remote and unforgiving surroundings? I certainly would never want to be in that situation but being able to witness, first hand, the evidence of that day, it really makes you stop and think. I was lucky that the sun was just appearing behind a snowstorm to help create a sense of drama’ 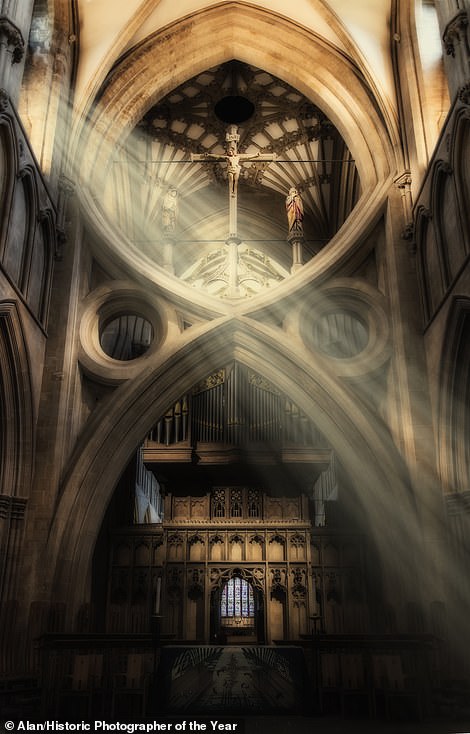 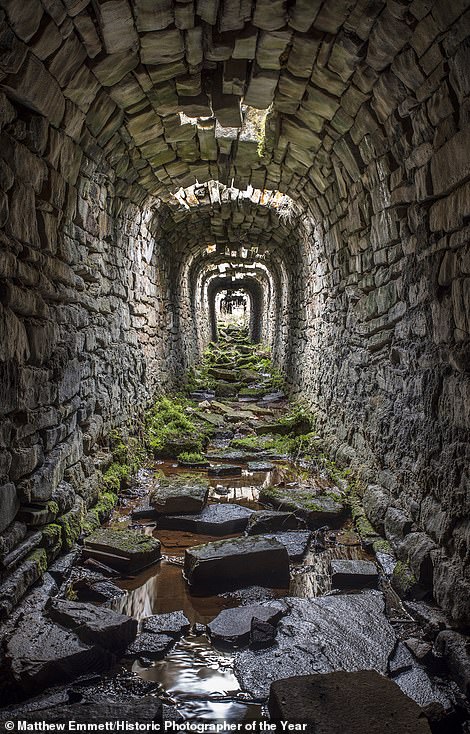 Sun streams through a window at Wells Cathedral in Somerset in an image, left, taken by a photographer only known as Alan. Pictured right are the Yarnbury Lead Mines in Grassington, Yorkshire, in a snap captured by Matthew Emmett. He said: ‘These flues lie just below the surface of the moor and were used to carry the smoke away from the smelting process’ 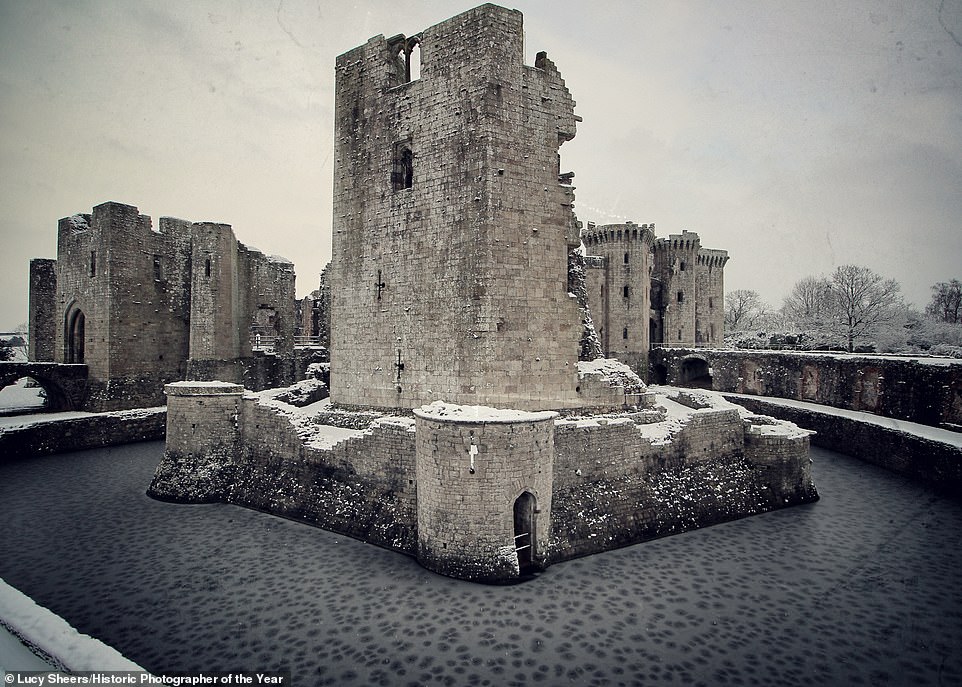 Lucy Sheers snapped this dramatic image of Raglan Castle in Wales in February 2019 in the snow. She said: ‘I felt the style of an antique postcard fitted this scene perfectly’ 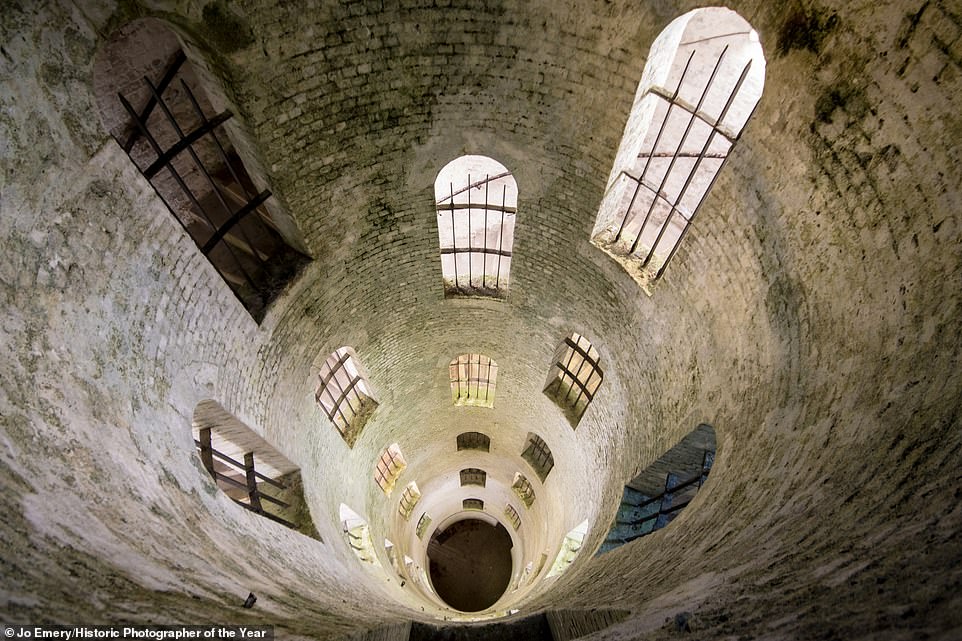 The Grand Shaft in Dover as captured by photographer Jo Emery. The image was commended by the judges. Jo said: ‘This is such a beautiful structure and has three sets of identical stairs in a triple helix formation. It is Napoleonic in age and is such a beautiful piece of history’ 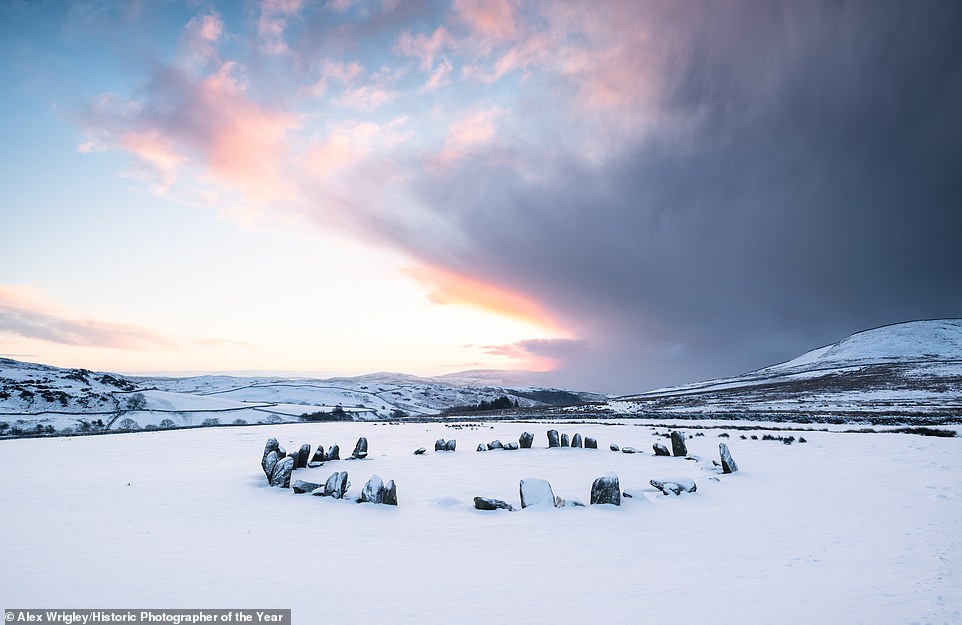 Alex Wrigley captured this shot of Swinside Stone Circle, which he believes is one of the lesser-visited late Neolithic sites in Cumbria. He said: ‘There’s a particularly high concentration of Neolithic constructions in the area, including the Giant’s Grave a few miles away in Kirksanton; Birkrigg, and Grey Croft Stone Circles a bit further afield, and a number of other sites hinted at on the surrounding fells. As far as the image goes, the heavy snow cover and lack of foot traffic leaves the area in pristine condition on this cold January morning. The snow also helps to obscure some of the more obvious signs of modern life, and you can certainly imagine our ancestors enjoying this view thousands of years ago’

Introducing a new level of luxury accommodation to Christchurch ·

Travel quiz: do you know your islands, Man Friday?