Ian Dryburgh and Mike Crump aren’t household names, but perhaps they should be – because over the past 25 years they have revolutionised travel.

These two polite, softly spoken designers sent a shockwave through the airline industry in 1996 when British Airways launched their ‘bed in the sky’ concept – the world’s first-ever cabin seat that could be transformed into a lie-flat bed.

At the time Mike, 53, was in the design team at BA. He had brought in Ian, 61, the founder of Acumen Design Associates, in 1994 to revamp BA’s first-class cabins. It was a decision that would change the landscape of the airline industry. 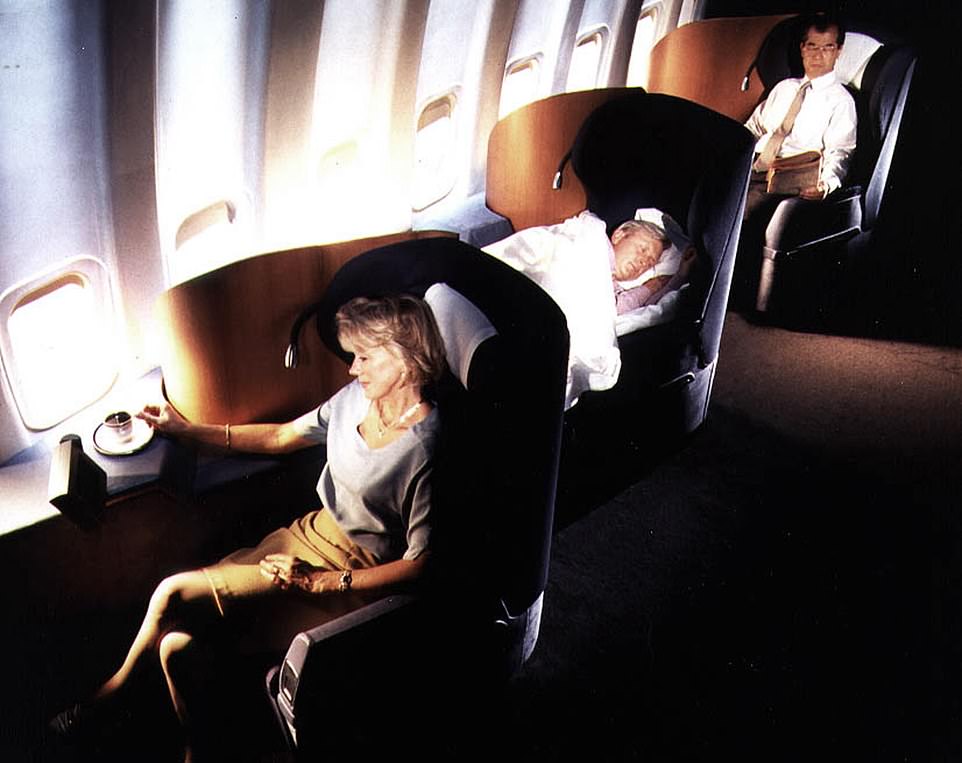 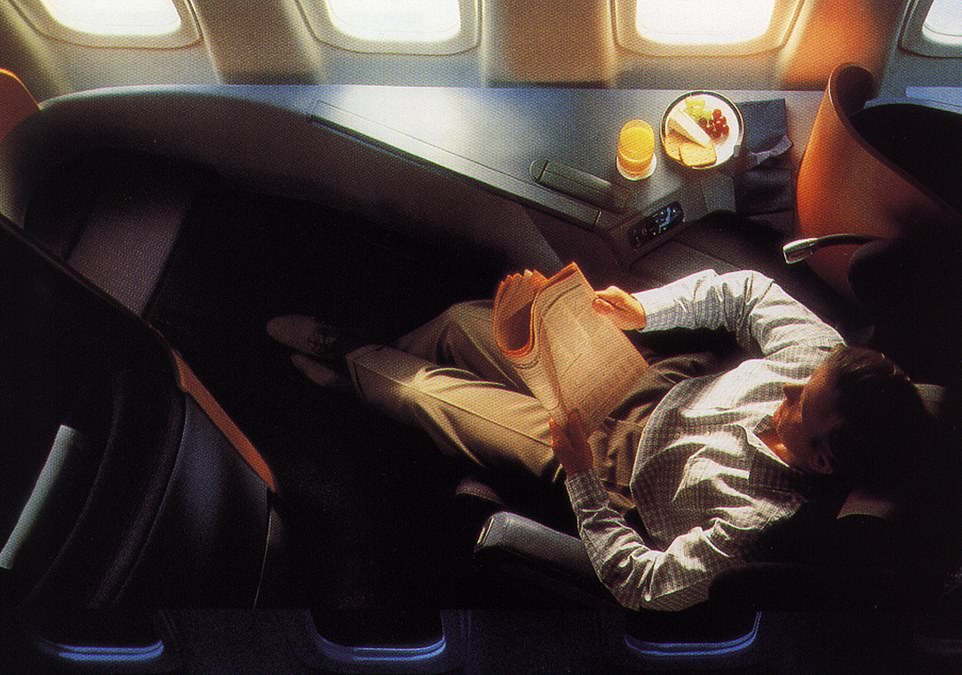 The 1996 BA first class suite, pictured, was the first airline seat that transformed into a bed

‘There were flat-beds obviously in the 50s and 60s, but this was the first seat that transformed into a bed,’ said Rotherham-born Mike, now Brand Experience Director at Acumen, when MailOnline Travel sat down with him and Ian in Acumen’s rather cool central London headquarters.

‘It transformed the industry and sent a shockwave through the premium market. After that, everyone was trying to catch up.

‘And it’s where Acumen’s fortunes changed.’

It quickly became a cabin-design powerhouse, producing a hugely impressive portfolio of work over the years for virtually every major airline. 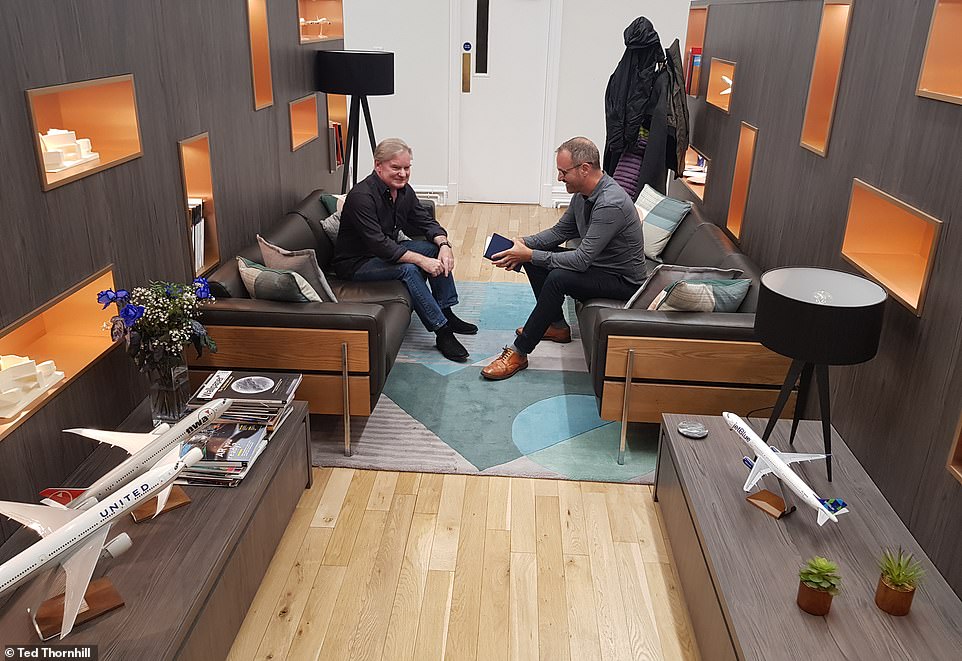 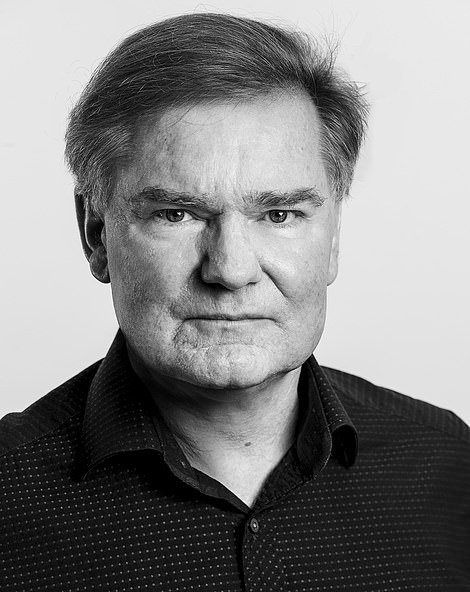 They play one of their presentations, which outlines key achievements – and they’re jaw-dropping.

During our intriguing chat, Ian and Mike revealed their thoughts on why economy class is so hard to revolutionise, why first-class cabins are being ditched – and the amazing lengths they go to during the research stages.

For the recently launched ANA cabin, for example, the team immersed themselves in the Japanese way of life.

The team went out to Japan, explained Mike, and learnt about its culture and philosophy and the latest trends to really understand the Japanese psyche.

He said: ‘They think about product design in a very different way to us. They wanted us to work with them because they wanted a Western perspective. They want to attract more foreigners. Because their population is declining.

Acumen went through a lot of concepts, but the winning one was driven by looking at very small minimal Japanese houses that have flexible spaces, where dining rooms can become bedrooms and so on.

Mike continued: ‘We came up with the idea of creating this big almost futon-like space. Rather than pressing a button and sitting in the same position, you can spread out and use this flat surface.’ 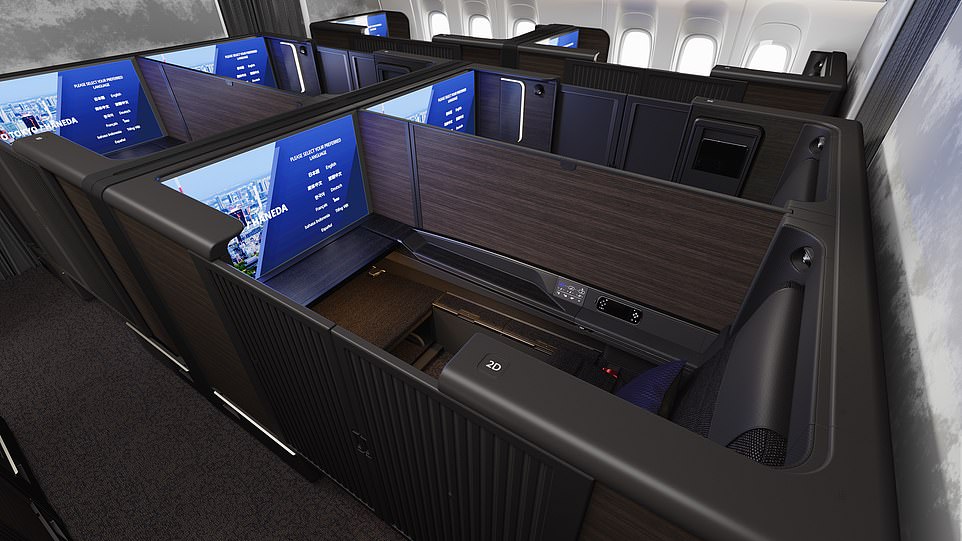 Ian explained that one of the crucial parts of any design is that it should be representative of the country the airline is from. ‘If you’re from that country you should climb on board and feel like you’re home,’ he said. ‘The tough bit is getting the tone right, and not lampooning the culture. That’s the key.’

Other designs have materialised with slightly less background research.

For instance, Ian came up with the idea for Acumen’s Optima business class seat, which United adapted to create a product called Polaris in 2016, while he was sipping a G&T on the train home. 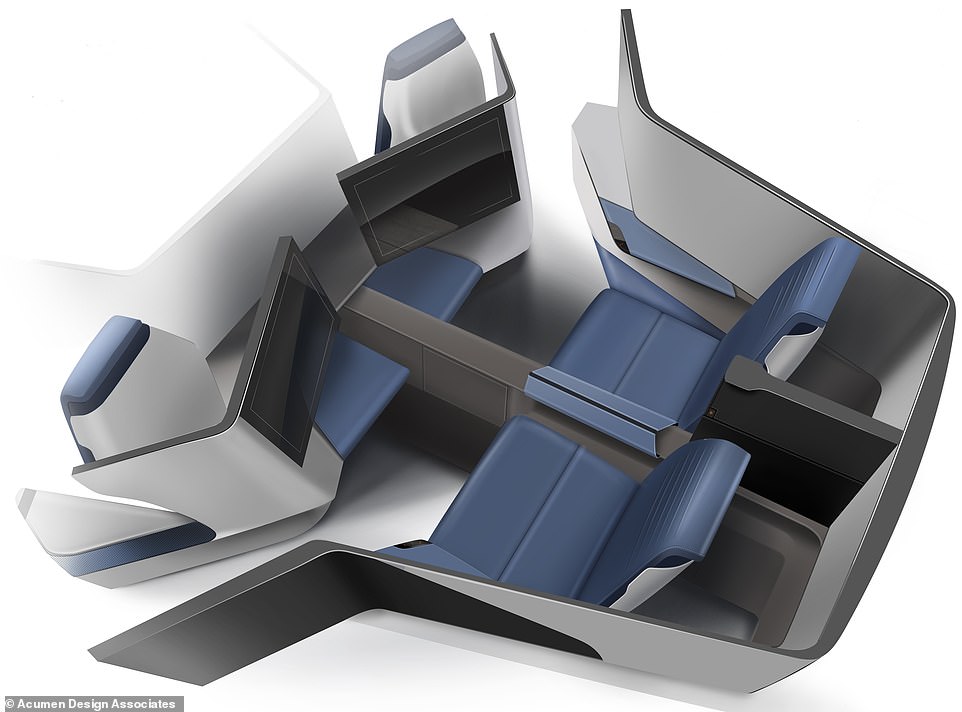 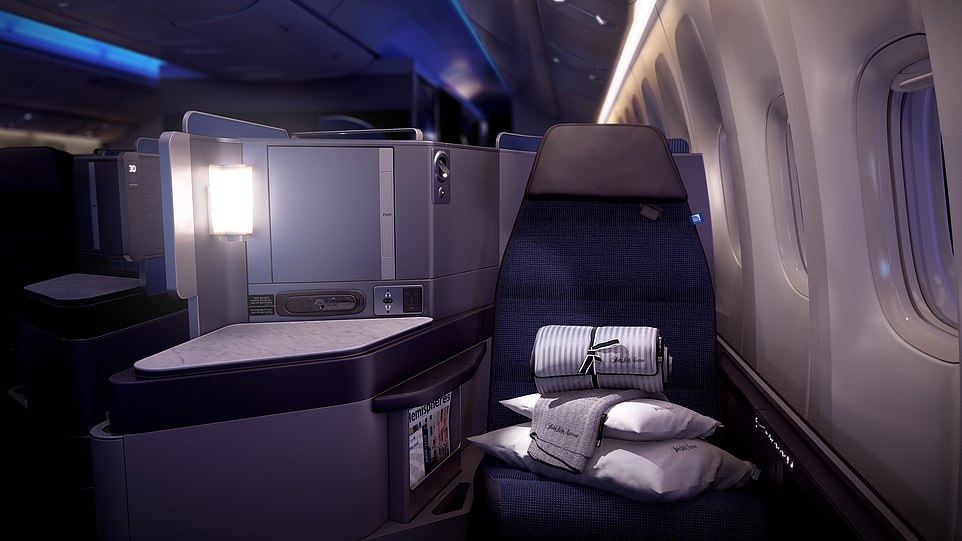 Pictured is the Polaris suite, which United is gradually rolling out across its fleet 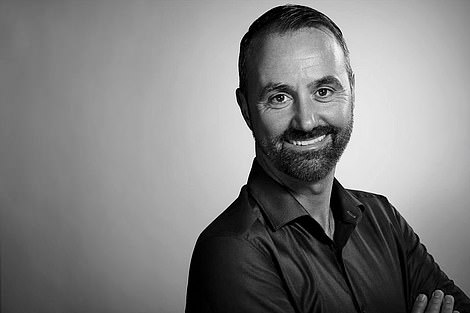 Mike Crump, pictured, brought in Acumen to revamp BA’s first class in 1994. It was a decision that transformed the travel industry

The Polaris programme is a $1billion investment for United – and it could have gone to any number of design agencies around the world.

But it chose Acumen.

And it’s no surprise because it’s a cleverly designed seat.

Ian, who lives in Hampshire, explained how the suites are ‘nested’, in that they are angled into each other, but that they also give everyone aisle access, which is the ‘Holy Grail’ of business class cabins.

This maximising of space bodes well for profits, Ian explained.

He said: ‘The clever thing with the Polaris is that by nesting it you get aisle access without any loss of space. And what does that mean for the airline? It means you typically get 10 per cent, or another row. In a cabin that has 40 business class seats, you get 44. So it’s a potential 10 per cent increase in revenue for the airline. And no discomfort for the passengers. United customers love it. For a company like United Airlines, it’s the difference between profit and loss.

‘So little ideas can become big ideas. Who would have thought that a little idea like that could produce a whole generation of opportunity?’

In fact, some may argue that many business classes offer similar standards to some first-class cabins, something Acumen is well aware of.

Mike said: ‘First class is getting smaller, or airlines are getting rid of it. Business class has grown up. All those features and benefits you used to have in first, are migrating to business class. So a lot of airlines are dropping it or reducing the size of their cabins, or they’re doing uber-first, like Etihad or Emirates.’

Improvements in economy class over the years have been more incremental, but there are reasons for that, said Ian – the stakes for airlines are higher when they change these cabins and designers simply have less room to play with.

He explained: ‘We’ve tried to revolutionise economy class, but it’s the toughest task, as you can appreciate, given the lack of available space. We’ve worked on a couple of interesting pioneering projects. One was a staggered economy seat, which gave you more shoulder room, and allowed more personal space. The problem is that the stakes are high when you start changing economy, given the numbers involved – and that’s the challenge. But we will get there, one day, we’re working on it.’ 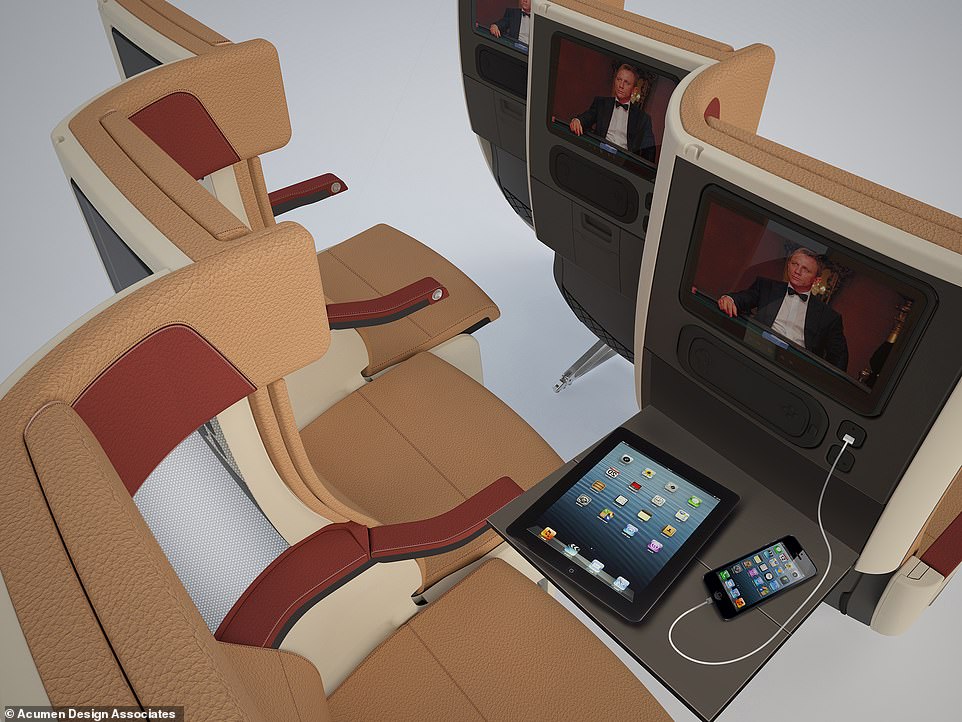 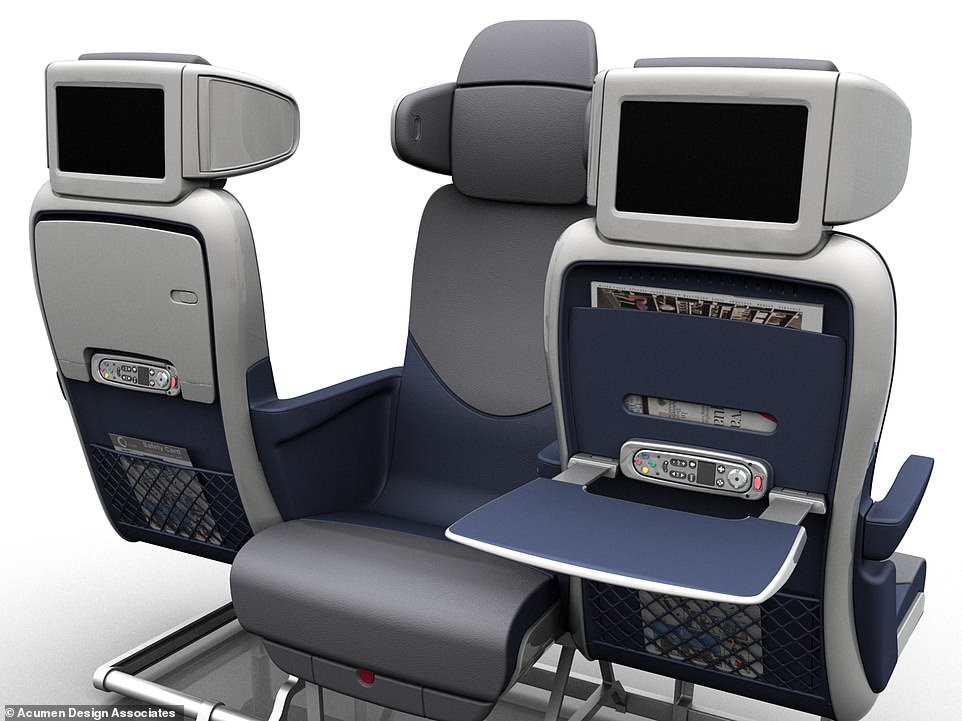 Mike was keen, meanwhile, to point out that Acumen has already given those at the back lots more to enjoy – Etihad’s 2014 economy seats, for example, which have a fixed ‘ear’ for passengers to lean their heads against.

He said: ‘It’s a small innovation, but it’s a major benefit to the customer in economy.’

He continued: ‘All the massive investments over the past few years, with in-flight entertainment, Wi-Fi on board, power plugs, connectivity, has changed the game in economy from being an arduous process to get through to a real experience, where you can immerse yourself in films and social media, whatever you want to do.’

Acumen has also worked with JetBlue to upgrade its economy class, giving the cabins a self-service mid-cabin drinks and snack bar called The Pantry, which allows people to get up at any time in economy, and help themselves to a snack or a drink. 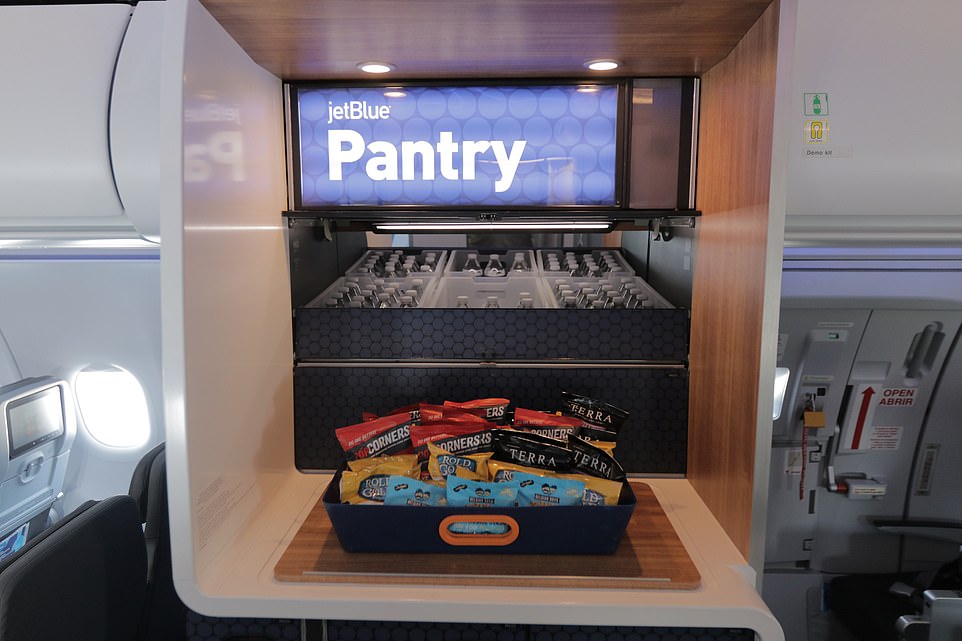 Acumen has also worked with JetBlue to upgrade its economy class, giving the cabins a self-service mid-cabin drinks and snack bar called The Pantry

Mike said: ‘While the innovations aren’t major leaps ahead, there are incremental improvements to the passenger experience.’

There could be giant leaps forward, added Ian, if only the planes themselves were bigger – or a different shape.

He said: ‘I think the real excitement and opportunities for economy as much as anything else is if future aircraft designs, proportions and so on, can be fashioned in a different way. That would allow us much more opportunity. We are very limited with these tubes we’re working with at the moment. You can image in the future, where suddenly you could have sleep options in economy, in the hold or above, which are not possible right now. That’s exciting.’

He added: ‘The Qantas’s of the world are looking at non-stop from Australia to London – and that will drive a very different agenda in terms of the architecture of the aircraft for the future, you could imagine. So suddenly you need stretch areas. You can’t just spend the whole journey sitting down for 16 hours or whatever. So that’s exciting. Because that might drive a very different opportunity for companies like this.’ 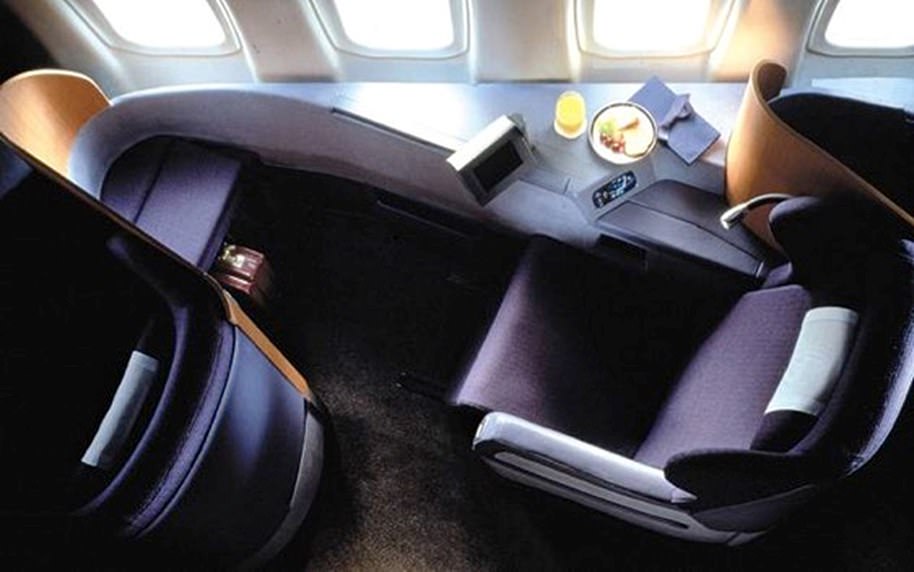 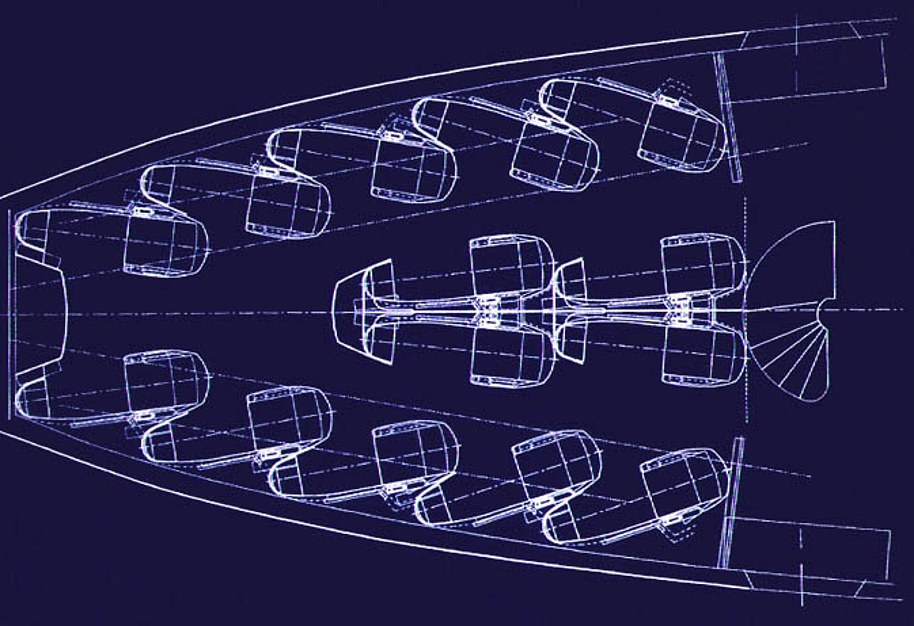 Game-changer: The seat redefined first class and shifted the paradigm for premium travel

Acumen is the inventor of the iconic British Airways ‘bed in the sky’.

The seat redefined first class and shifted the paradigm for premium travel. The patented product is now cited as the mother patent for all lie-flat first and business class seats that followed.

Next-level design: The First Class Apartment is the first ‘single-aisle product’ ever to be installed on a wide-body aircraft 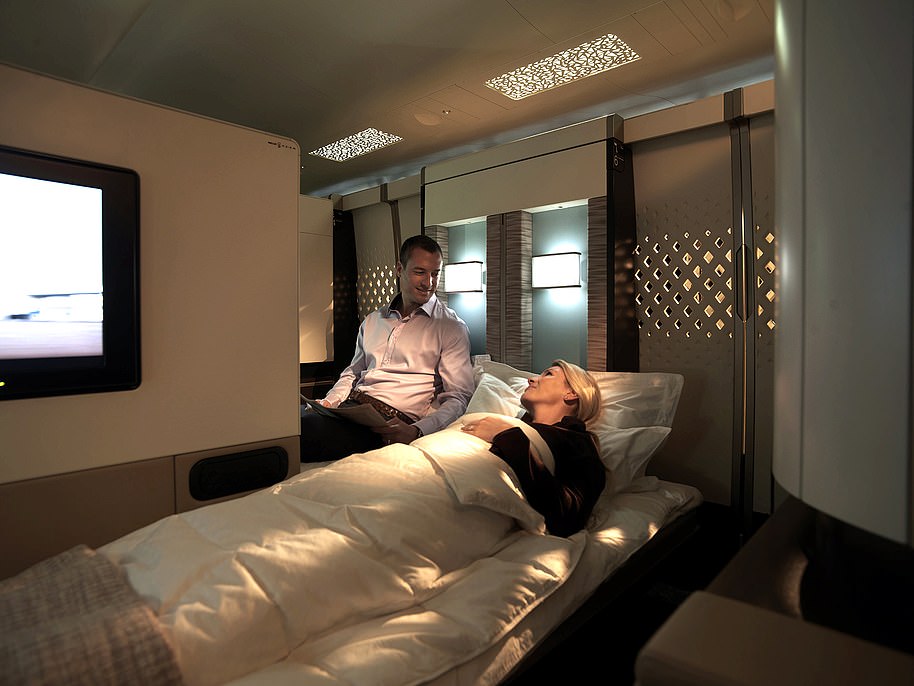 Acumen patented this design, which allows for adjoining suites to be opened to create double beds

The First Class Apartment is the first ‘single-aisle product’ ever to be installed on a wide-body aircraft.

This patented layout was conceived to recreate the boutique hotel experience, says Acumen. The Apartment allows for a 30in-wide seat, a separate 26in-wide bed, a vanity unit and adjoining suites can be opened to create double beds. 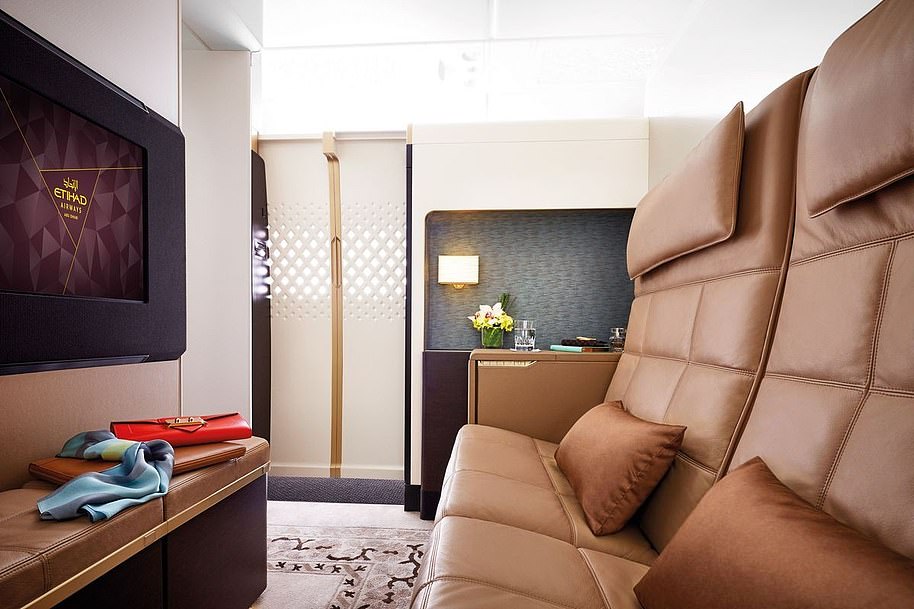 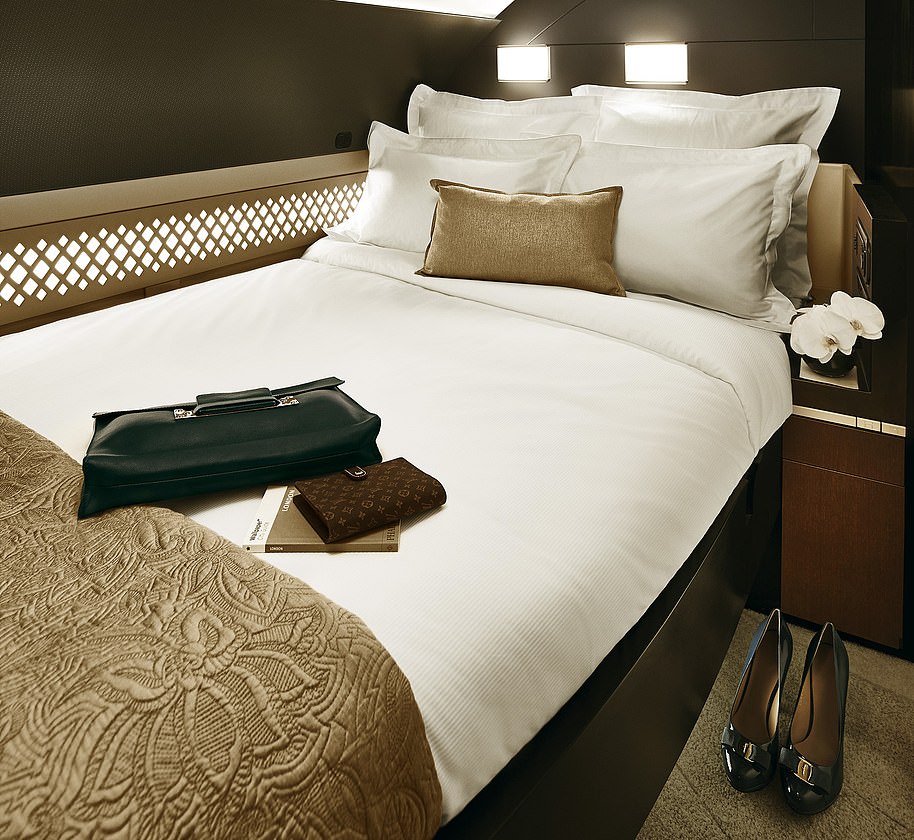 The Residence is truly VIP, and comes with a private lounge and completely enclosed bedroom with a double bed

Acumen says that for The Residence it ‘worked with a consortium of design agencies to create a new class of travel’.

It continues: ‘The Residence is the world’s first dedicated VIP offer to be developed for a commercial wide-body aircraft. The patented layout comprises a private lounge with a sofa, a completely enclosed bedroom with double bed and an en-suite shower.’

This design was successfully pitched to United, which adapted it slightly and called it the Polaris suite 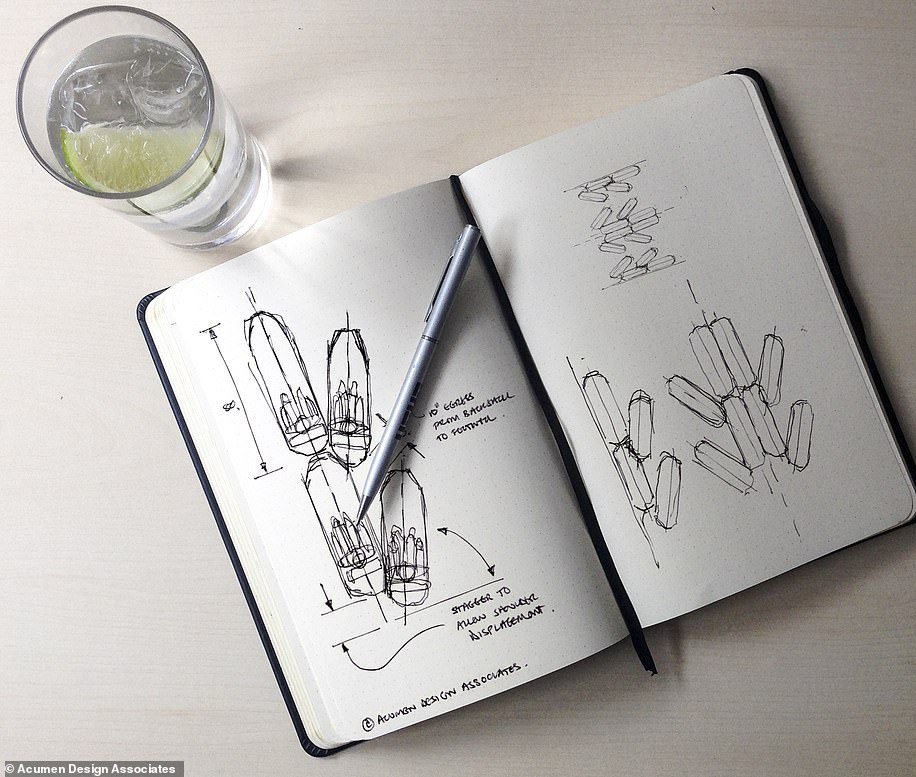 Acumen says that it recognised an opportunity in the market and inhouse invented the ‘Optima’ high density Business Class idea.

Acumen then successfully pitched the seat to United Airlines, which now has the North American license to this configuration. United launched its version of the product, called Polaris, in 2016. 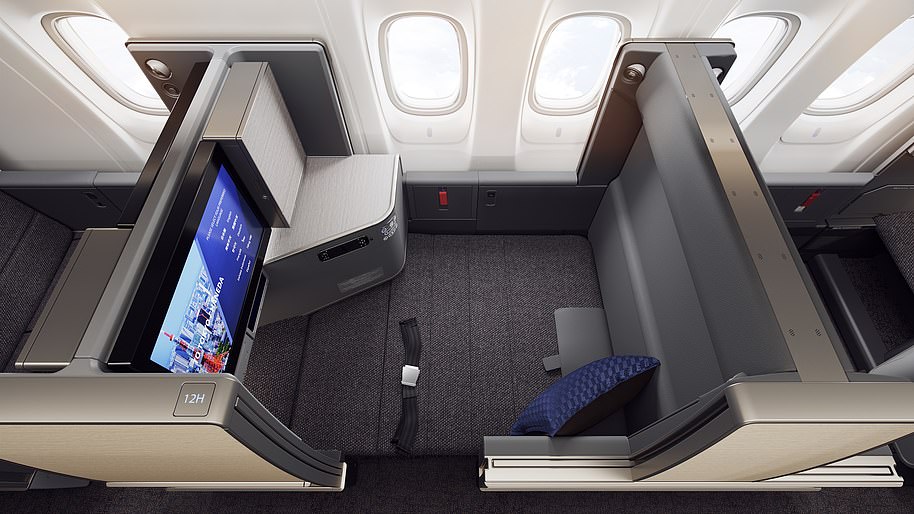 One of Acumen’s most recent successes is this – a new business class seat for ANA, pictured here in bed mode 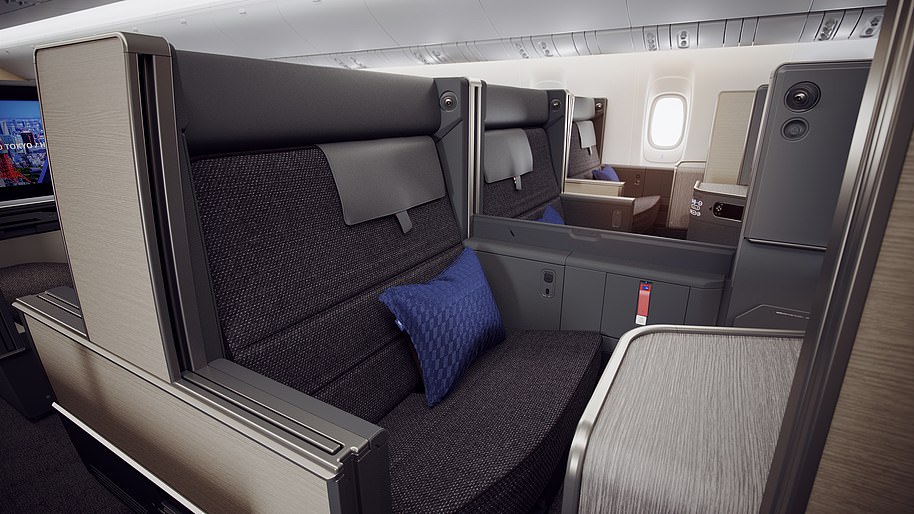 Launched in July 2019 as The Room, the seat offers an uncompromising level of space

Acumen says: ‘For our most recent project for ANA, we created a new bespoke ‘Blue Sky’ Business Class seat.

‘Our original concept was later merged with a similar product being developed under wraps by the seat supplier Safran.

‘Launched in July 2019 as The Room, the seat offers an uncompromising level of space, with the widest seat and bed in Business Class, flexible privacy doors and personal screens, and a fixed 4K 24in monitor.’

The best holiday destinations to escape those winter blues – will you be visiting?