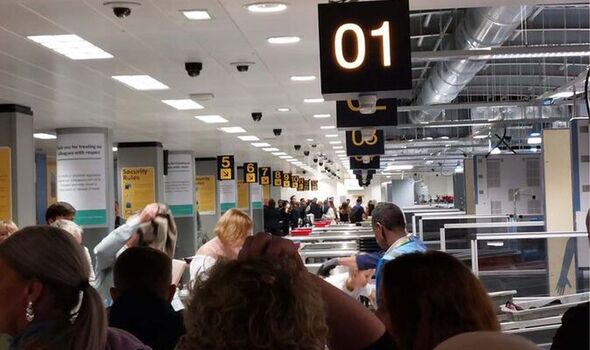 The strenuous wait, which was brought on due to a shortage in staff, saw disgruntled travellers wait in long queues before arriving at the security checks. Mark Meadows, who was getting ready to take off on an easyJet flight to Berlin with his family, shared images of the queues of people waiting to pass through the airport in Terminal One on Tuesday afternoon (June 7).

Mark’s pictures showed just two of 13 security bays open, however, the Manchester Evening News understands that there were actually a total of five lanes open across the two security areas in the terminal.

Following the long wait, his flight was then cancelled, and the family had to re-book for the following day (June 8). easyJet said the flight was cancelled due to ‘air traffic control delays’.

Mark said: “Security didn’t look so bad when we were arriving, at least it wasn’t snaking outside. But, when we got in, it was a different story. They had just two security lanes open. It was utter chaos. A lad was trying to help get people to the front who were risking missing flights but it wasn’t exactly organised.

“My little boy also had to wee in a plastic bag in security as we waited so long and there was no chance of leaving for the toilets.

“Finally we got through. Our flight was delayed but that helped as then we weren’t stressed about missing it. But it was so delayed it then got cancelled. Manchester Airport didn’t even bother flashing the cancellation on the screen, they just removed it completely.

“I then wandered around a few gates and found one with an angry queue and that was the one where a man was handing out instructions. I ran to the main lounge and alerted others to go to that gate for info. Then the easyJet email dropped about the cancellation.”

The Manchester Evening News understands that travellers were urged by the member of the staff speaking on the tannoy to “double-check bags” to ensure they hadn’t left any liquids inside and to remove jackets and empty pockets to further speed up the security queues.

The airport also confirmed that as they ’emerge from the most damaging two years’ in their history, they have hired almost 400 new members of staff this year – and have a further 500 going through background checks currently. It was last week that the airport issued a candid apology over its staffing crisis.

A spokesperson for Manchester Airport said: “We apologise to any passengers in Terminal One who were affected by long waits at security yesterday afternoon. We are emerging from the most damaging two years in our history and, like several other UK airports, are facing resourcing challenges at present.

“Most passengers will get through security within 30 minutes, but on occasion security queue times will be higher than this, and so we are advising passengers to arrive at the airport three hours before their flight is due to depart. We have welcomed nearly 400 new starters into the operation so far this year, with a further 500 people going through security and background checks right now.”

A spokesperson for easyJet said: “We are very sorry that flight EZY1895 from Manchester to Berlin yesterday was cancelled due to earlier Air Traffic Control delays which unfortunately meant the flight would not have arrived in Berlin before the airport curfew was imposed.

“We notified customers directly of their options to rebook or receive and refund and provided hotel accommodation and meals where required. Nonetheless we fully understand the disruption this will have caused to these customers’ plans and we are very sorry for this.”

Man falls 40 floors to his death