Now THAT’S a leap of faith: What it’s like to freefall at 90mph down a 200ft drop… on the end of a VERY long rope

‘We’re going to take you guys up a cliff and throw you off. Sound OK?’ a tattooed Kiwi man said to me and a few other people.

I wasn’t ‘OK’ with it, but I was ready for the challenge. I’d signed myself up for the world’s highest cliff jump in a bid to conquer my fear of jumping from heights.

The Shotover Canyon Swing in Queenstown, New Zealand, sees thrill-seekers jump off a platform perched 360ft high and free-fall at up to 150kph (93mph) on a specially designed rope. 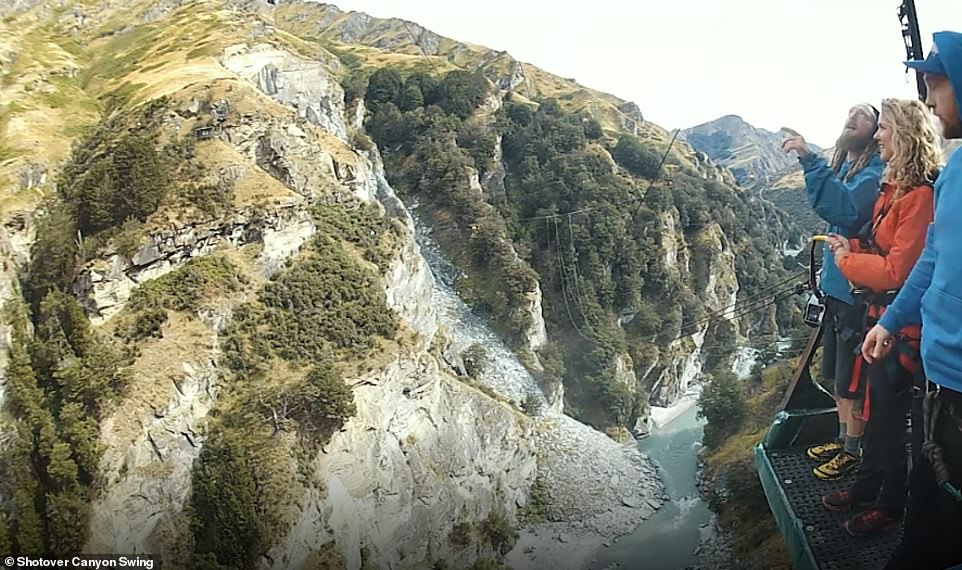 MailOnline Travel’s Sadie Whitelocks signed up for the Shotover Canyon Swing in Queenstown, New Zealand. Sadie said her tactic for jumping was not to look down into the canyon below 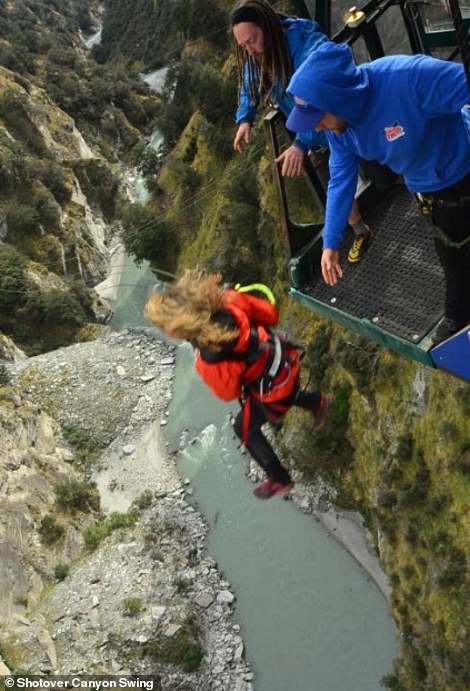 My heart was pounding, my palms were sweating. I wasn’t looking forward to the prospect of it at all.

I once jumped from a cliff into the ocean while on an outdoor pursuits trip with school and narrowly missed a bed of rocks and I’ve been terrified of jumping from heights ever since.

But the burly Kiwi man reassured me I would be ‘fine’ and before I knew it, I was harnessed up and being led towards the ‘platform of doom’.

‘What’s the worst that could happen?’ the man said. 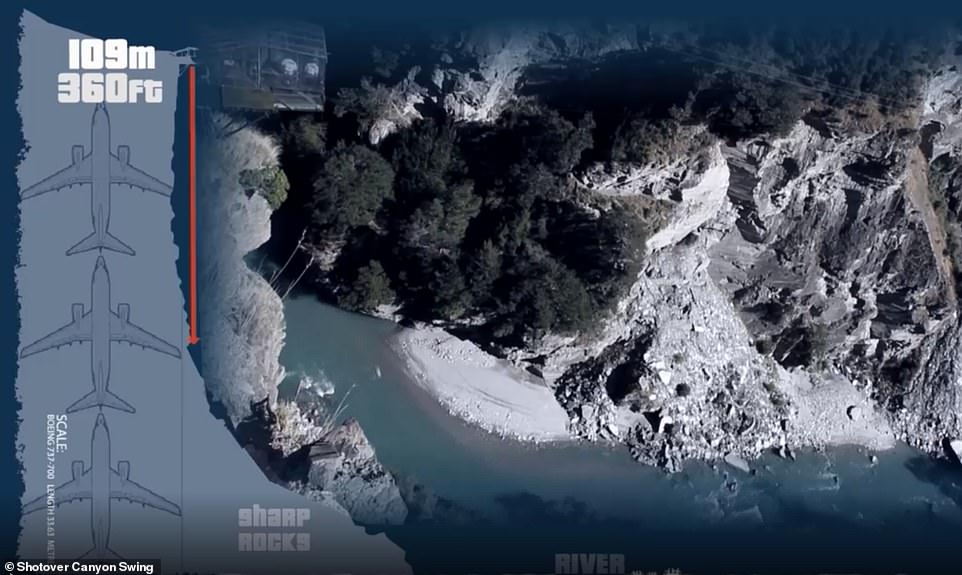 ‘I guess, death?’ I replied, with a slight quiver in my voice.

There are various ways you can eject yourself from the platform at the Shotover Canyon Swing.

The more confident jumpers can choose more difficult-to-perform positions which allow them to experience maximum g-force.

For me, the meek first-timer, I decided I wasn’t going to look down. I was merely going to run and jump.

A hangover from a night out in Queenstown helped, as my brain wasn’t really functioning at full speed and there wasn’t much ‘fight or flight’ left in me.

After asking once again if I would be OK, I took a deep breath and ran forwards.

The wooden boarding beneath my feet suddenly vanished and I was unable to control my limbs as I sped through the air. 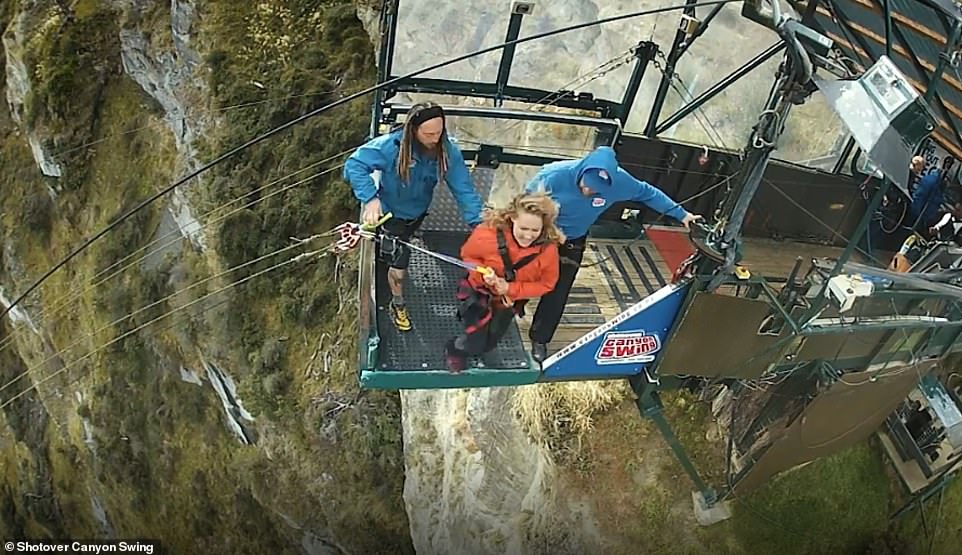 As she hurtled at high speed, Sadie said it was impossible to scream and she closed her eyes 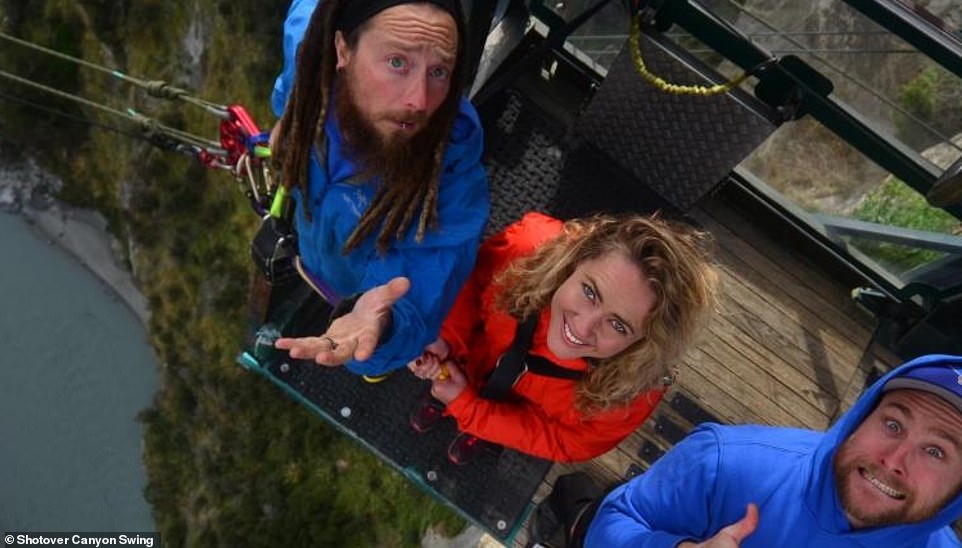 Sadie said her heart was pounding and her palms were sweating before she plunged off the platform, but the staff reassured her it was safe

It all seemed to happen so quickly and the feeling of weightlessness was overwhelming. I closed my eyes and hoped for the best while clinging tightly the rope.

I was falling so quickly it was impossible to scream – despite my mouth being hinged open in terror – and a cold chill in the air stopped me from passing out.

Before I knew it, I was slowing down and I swooped towards the bottom of the canyon with the Shotover River gushing below.

Instead of crying, I was surprised that my immediate reaction was to laugh as I swung from side to side like a cat’s plaything.

I was hit by a crazy kick of adrenaline and was thrilled it was all over.

After coming to a standstill, I was winched back up to my starting point.

‘Would you like to go again?’ the man said.

A jump on the Shotover Canyon Swing costs from £128 (NZ$249) and booking in advance is recommended.

Sadie took part in the activity while exploring New Zealand’s South Island with Wild Kiwi, which offers small group adventure tours for travellers aged 18 to 35. Trips start from (NZ$1,199) £619 per person, which includes the tour, accommodation, a professional local guide, and breakfast each day. Optional activities are available at an additional cost.

Can I go on holiday if I have AstraZeneca vaccine? How to check batch number