Japan is facing weather hell as it is hit by typhoon Hagibis this weekend. Seven million people have been told to evacuate in various regions of the country. Two Rugby World Cup matches have been cancelled and the Japanese Grand Prix has been delayed. All flights in the Tokyo region have been grounded, with delays and cancellations elsewhere. What is the latest flight news?

The airline have advised: “Due to strong Typhoon Hagbis, ANA international flights have been disrupted on October 12 to 13.

“October 13, Tokyo Narita Airport: No departure and arrival flights. All flights are canceled or delayed to OCT 14.

“Tokyo Haneda Airport: Most flights have been delayed and cancelled.

“Additional cancellations and delays are possible. Please check the Flight Status for your flight.” 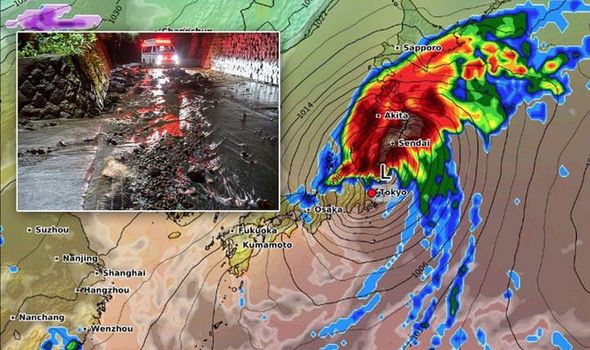 The airline said: “JAL flights are experiencing irregular operations due to Typhoon Hagibis. We apologize for any inconvenience caused from the effect of Typhoon Hagibis.

“October 12: All the flights to/from Tokyo Haneda, Tokyo Narita Airports have been cancelled

except for morning flights.

“Some of the flights to/from Nagoya Chubu, Osaka kansai have been cancelled or long delayed.

“Tokyo Haneda, Tokyo Narita: Many flights have been cancelled and delayed. Also other flights may be cancelled.

“Nagoya Chubu, Osaka kansai: Some of the flights may be cancelled or long delayed.”

The airline is offering passengers the option to change their flights as a result of the typhoon.

They wrote on their website: “If you are due to travel with British Airways to or from Tokyo Haneda (HND), Tokyo Narita (NRT), or Osaka (KIX) between Thursday 10 October and Sunday 13 October 2019 but no longer wish to travel, you are able to change your booking free of charge and travel on a later date up to and including 5 days from your original travel date.”