A Greek goddess: Deserted beaches and ancient ruins – the rugged landscape of Ios is a world away from the country’s crowded coasts

A cat crouches in the dappled sunlight beneath a trellis of bougainvillea, watching me sip Greek coffee and eyeing my baklava.

This traditional Kafeneion (coffee shop) is behind the cathedral of Chora — the main (and only) town on the island of Ios. It’s a warren of narrow lanes that wind steeply to the cliff-edge church of Panaghia Gremniotissa for fantastic sunset views.

In the lazy, end-of-season noon, it is hard to credit Ios’s reputation as party-central since its hippy heyday in the Sixties and Seventies. 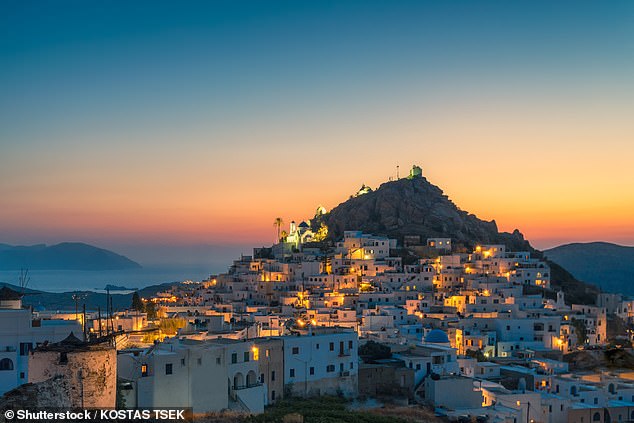 Tiny, hilly and ravishing, Ios is an anomaly — a Cyclades island of blue domes, whitewashed buildings and old windmills that has escaped the exploitation of her neighbours.

Where Santorini receives some 2.5 million tourists a year, and über-chic Mykonos throbs to more than 2 million visitors, the ferry to Ios deposits a mere 125,000 souls — mostly youthful back-packers.

The unspoiled landscape seems little changed since the flowering of the 5,000-year-old settlement of Skarkos — older than the archaeological site of Akrotiri on Santorini — and discovered near Ios harbour in 1984.

The lack of an airport and the absence of cruise ships has proved the island’s saving grace; that and its arid and mountainous topography, with dirt tracks descending to small coves that contain Ios’s 40-odd beaches — of which only five provide facilities such as sunbeds or restaurants.

Most are deserted and accessible only by sea. It is worth making the effort to explore.

A speedboat (you can hire them in the port) whizzes me round the coast, past cove after cove of limpid waters — stopping at beaches strewn with pebbles of glistening quartz and mica. 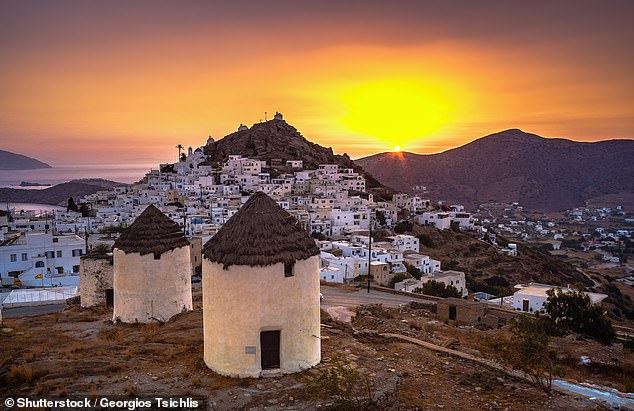 On Trypiti beach, we have only a wild goat for company. There is barely a building in sight.

If Angelos Michalopoulos, owner of the LuxurIos tourism and conservation project, has his way, this will not change. Together with his wife, Vasso Petridou, he has acquired 25 per cent of the island, and is building small, environmentally-aware hotels, restaurants and lounges to cater for a more sophisticated clientele.

‘We will only develop 1 per cent of our land,’ he assures me, ‘because we want to preserve the authenticity of Ios and save it from over-development.’

I visit Papas beach where, in July, Michalopoulos’s no-expense-spared Calilo is due to open with 25 suites. Designed by the owner and built from local stone and Greek marble, it lies camouflaged in gardens planted with ancient olive trees rescued from the mainland, where they had been destined for the fireplaces of Athens. It is set to be the island’s most exclusive resort.

I’m staying in the Agalia Luxury Suites, also part of the Michalopoulos’s LuxurIos portfolio, my secluded pool-terrace room overlooking one of the safest harbours in the Cyclades. 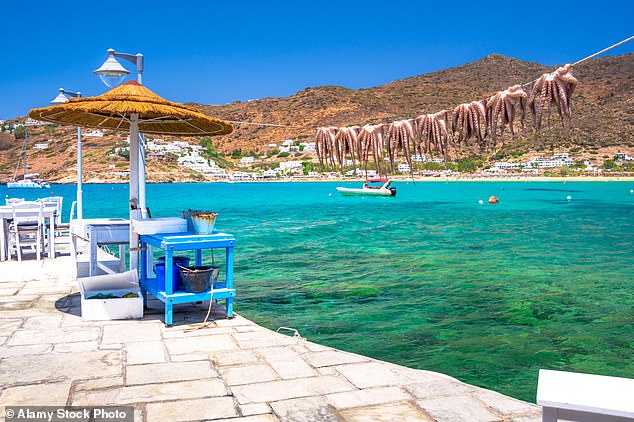 Taverna treat: Octopuses dry in the Ios sunshine. Most beaches on Ios are deserted and accessible only by sea

It is perfectly located between the port and town, where most of the action takes place, and the crystalline waters of Koumbara beach, with its typical psarotaverna [fish restaurant] and the cool Erego Beach Club and Restaurant, which serves familiar Greek dishes with uncustomary flair — fava, wild greens, glazed lamb.

Endlessly moreish, it is tempting to stay put. ‘Most people simply shuttle between town and Mylopotas beach, with its buzzing tourist infrastructure,’ says Michalopoulos. ‘But there’s so much more to the island.’

The gauntlet has been thrown down. And so, I up sticks and explore. Whereas seven islands contend for Homer’s birthplace, only Ios claims the poet’s mortal remains. According to Herodotus, the poet died here on his way to Athens — and why spoil a good story?

I make the pilgrimage to his grave, on a headland overlooking his famed ‘wine-dark’ Aegean. It is the most magical spot, in the middle of wind-swept nowhere, marked with small cairns and a marble plaque.

We drive on, through mountains fragrant with wild thyme, and strung with rows of beehives. 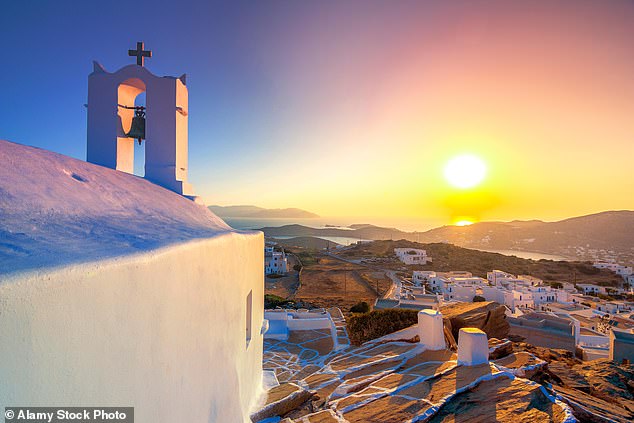 The stone houses that are dotted around the island. The unspoiled landscape seems little changed since the flowering of the 5,000-year-old settlement of Skarkos and discovered near Ios harbour in 1984

Eventually, a sign points to our destination — Paleokastro (Old Castle) — and we begin a dizzying 20-minute walk up to the ruins of a 14th-century castle, our path peppered with lilac lilies and wild onion.

Within the castle walls sits a silent church, shaded by olive trees. There is nothing in sight but mountains, sea, the island of Iraklia in the distance and the wild, rugged beach of Psathi below.

Sheep and goats are the only traffic along our route. We pass a shepherd’s house and, feeling peckish, collect home-made skotiri cheese — delicious with ouzo and octopus nibbled at a little taverna on Manganari beach — before our drive home.

Later, over cocktails at Pathos, Michalopoulos talks of his vision for Ios.

‘Our challenge is to offer something to young people, and not price them out.’

Pathos is one such offering. A sensational cliff-terrace lounge with vast pool, DJ, sunsets to make Santorini weep, and all the vibe of a Nikki Beach. The difference? Just £8.50 secures both entry and a drink.

Whether one man can shape and preserve the identity of an island remains to be seen. But the gentle loveliness of Ios remains its own best advocate.

As Lawrence Durrell put it in his book The Greek Islands, Ios is ‘the most poetical and beautiful island of its size in this part of the Aegean’.

France travel: Is France on the green list? What tougher measures could be introduced?

Your ultimate guide to travel in the US in 2021

Epcot’s IllumiNations to End in 2019

Cabin crew secrets: Flight attendant reveals what annoys her the MOST about passengers