Home » Travel » Inside Tartu, Estonia's equivalent of Oxford or Cambridge

Inside Estonia’s equivalent of Oxford or Cambridge: Exploring little Tartu – a bustling centre of learning with a bohemian vibe

All cities have their good points — whether it’s the markets, cafe culture or music scene. Tartu, Estonia’s second largest city, has all that plus something more cerebral: it has good thoughts, too.

Tartu is known as the City of Good Thoughts and is the Estonian equivalent of Oxford or Cambridge.

It’s the country’s centre of learning and the university, founded in 1632, gives the place a bohemian vibe, a can-do attitude and a sense of positivity. 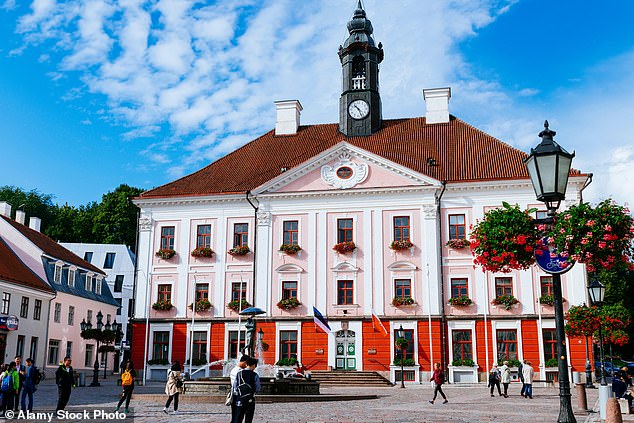 The Town Hall Square in Tartu, which is the second largest city in Estonia

The old streets are bustling with students until lectures begin — when they all dash off. At least, that’s what happened before Covid-19 struck.

A small country with a population of 1.3 million — about the size of Prague in the Czech Republic — Estonia was part of the Soviet Union until 1991. I found the people to be welcoming with an often irreverent sense of humour.

The country has a couple of claims to fame: it won the Eurovision Song Contest in 2001, and Skype was invented here — you’ll find good internet connections everywhere.

Tartu’s Town Hall Square, where cafes spill on to the cobbles, is also the venue for fairs, music, food and film festivals.

In front of the town hall, a young couple fall into each other’s arms. They’re copying the Kissing Students statue nearby (pictured), a much-loved symbol of Tartu, which stands in the middle of a fountain.

A smooch here is said to bring good luck and many believe it’s worth a try.

Further down the main square is Tartu Art Gallery. Known as the Leaning House, it slopes even more than the Leaning Tower of Pisa. I am intrigued to see if the contemporary Estonian artwork inside is hung at a matching angle. It isn’t, of course.

Nearby is a market where Victoria’s Secret model Carmen Kass would sell strawberries and potatoes as a child.

Tartu Old Town can be explored on foot. I join a guided tour of the university, which takes in the grand assembly hall and the art gallery where plaster-casts of hundreds of sculptures stand. It’s a bizarre sight.

In the attic is a graffiti-covered cell where unruly students were confined in the 19th century. As punishments go it wasn’t that harsh. The door was never locked and wealthy students could take in their servants — but, then, the offences were often trivial, such as returning books late.

In 1826, Tartu embryologist Karl Ernst von Baer identified the reproductive egg in female mammals and became known as the man who discovered where babies come from. I walk to see his statue in Dome Hill Park. 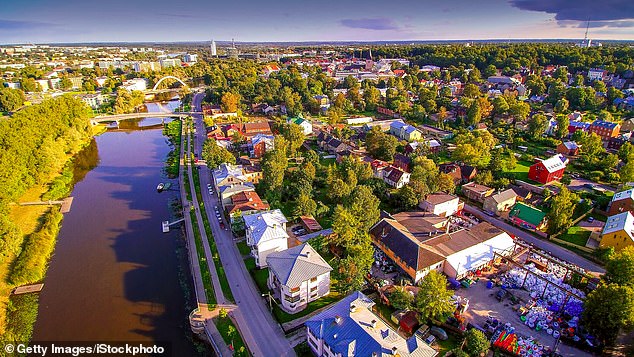 Tartu, pictured, is known as the City of Good Thoughts and is the Estonian equivalent of Oxford or Cambridge

Regent Holidays (regent-holidays.co.uk, 0117 453 1288) offers an eight-day Essential Estonia tour taking in Tallinn, Narva, Parnu and Tartu with accommodation and breakfast from £650 pp, including flights and buses.

It’s not far from the Friedrich von Struve monument. He was the director of Tartu Old Observatory, now a museum but once an important centre of astronomy. In the 19th century, he laid out the Geodetic Arc, which made it possible to calculate the Earth’s size and shape.

Exhibits include a meteorite and the Fraunhofer refractor, which was used to calculate the exact distance of a star from the Earth for the first time.

You can see a display of the university’s projects and successes at the University of Tartu Museum, housed in the ruins of the cathedral, also on Dome Hill.

I wander round the ruins and love the Good Thought Benches around the park, inscribed with quotes from Tartu thinkers.

Here’s a thought of my own: Tartu is fine and full of learning, yet it’s not all about formulae and equations. It’s also about luck and making wishes come true.

I leave a coin for luck on a pagan sacrificial stone, used now by students burning their study notes.

Our guide tells us if we hold our breath as we cross Angel’s Bridge, our wishes will be granted. I breathe deep and hurry across.

My wish is to return, and sooner rather than later.

Swiss International Hotels and IDS Next enters into partnership ·

Traveling With Your Kids Will Make Them Better in School, Study Suggests

Lockdown life: How to turn your home into a luxury hotel