Inside one of Britain’s most celebrated hotels – Le Manoir aux Quat’Saisons: MailOnline checks in, then tucks in at the legendary restaurant, which has held two Michelin stars for 35 years

Raymond Blanc has made it his life’s work to put smiles on faces at his celebrated Oxfordshire hotel – and Belmond Le Manoir aux Quat’Saisons’ dining room is packed with happy people.

This month Britain’s favourite Frenchman is celebrating the rarest of double anniversaries – 35 years since he founded his grand restaurant with rooms, and 35 consecutive years with two Michelin stars.

And Le Manoir’s landmark also coincided with another one just as important (in my humble opinion) – 10 years since I married my wife, Gemma, who was so shocked when we arrived for a surprise visit that she screamed so loudly I nearly crashed into the grand wrought-iron gates.

As she repeatedly yelled ‘turn the car around, we can’t go in here’, I became so befuddled I careered out of the car park and into the orchard where a member of staff rescued us from a muddy field. ‘Play it cool Trig,’ I thought, as I trudged along its famous boulevard of lavender bushes towards the hotel. 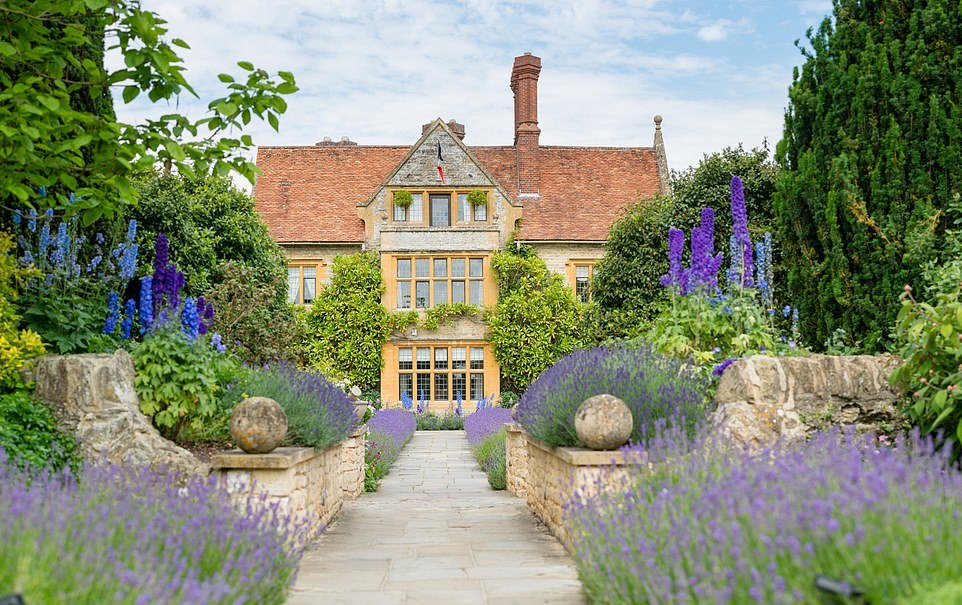 Belmond Le Manoir aux Quat’Saisons in Oxfordshire is celebrating being open 35 years – and an extraordinary 35 years in a row with two Michelin stars, all under the stewardship of star chef Raymond Blanc 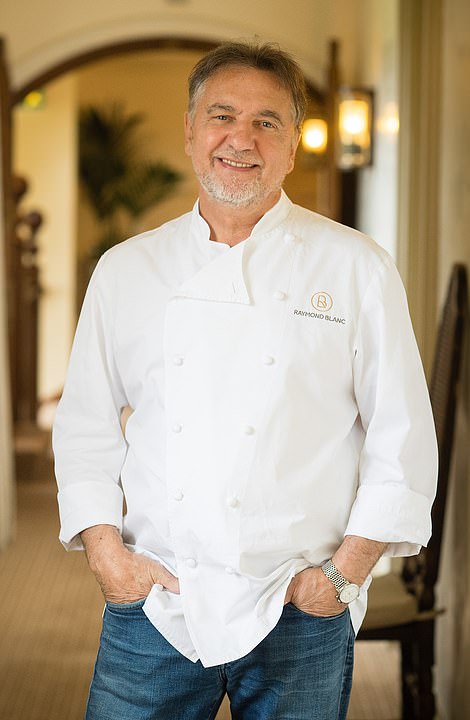 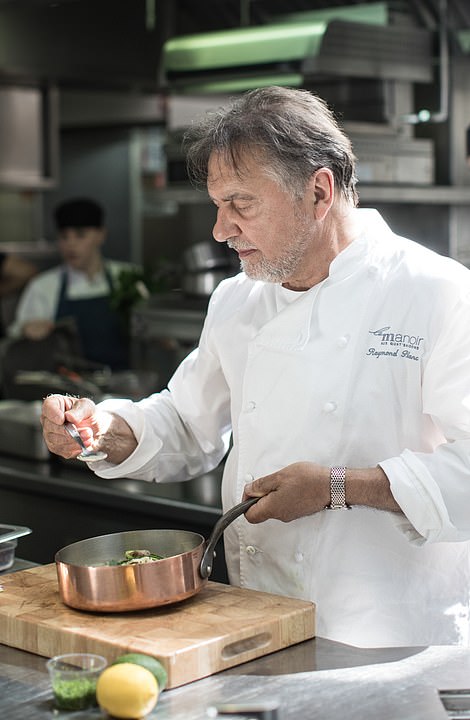 Raymond Blanc arrived in Britain in the 1970s and despite being self-taught is considered one of the world’s finest chefs, having built up Le Manoir from scratch using his life savings and cash help from friends 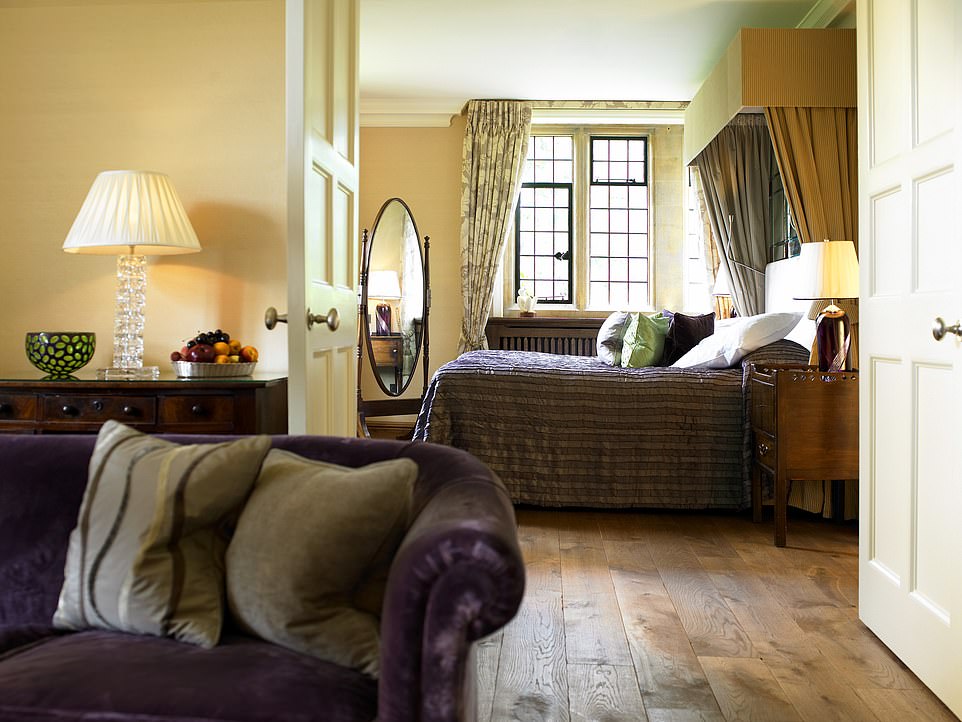 Suites at Le Manoir, including this one, Lavande, which Martin and his wife stayed in, are cosy and comfortable with large beds, sitting rooms and giant marble bathrooms with organic luxury toiletries to use 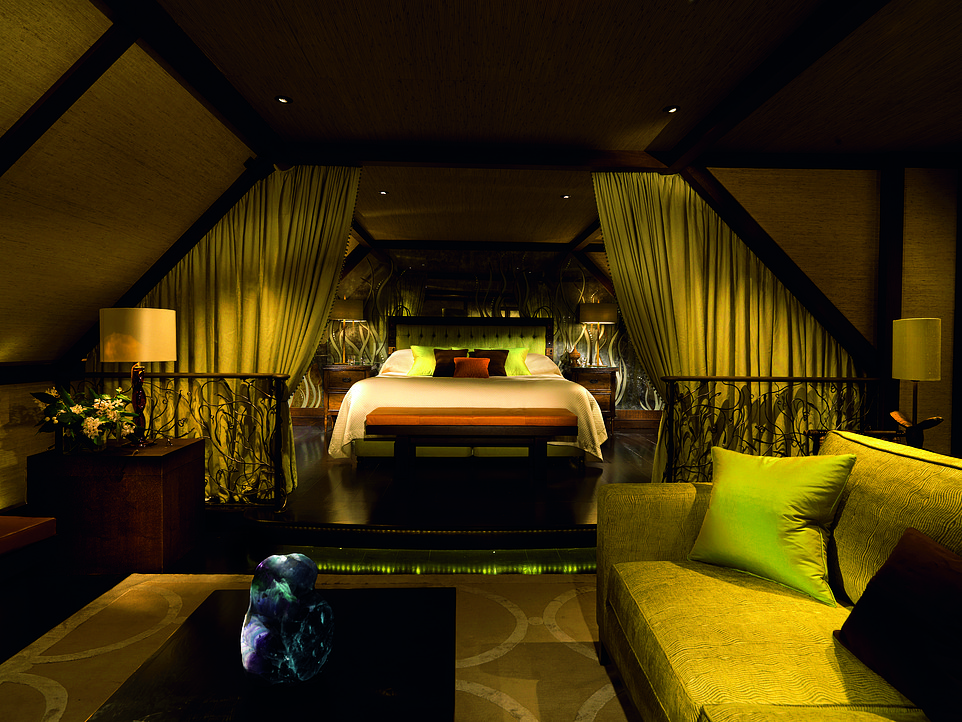 This Le Manoir suite is called Jade. There are 32 individually-designed rooms in total 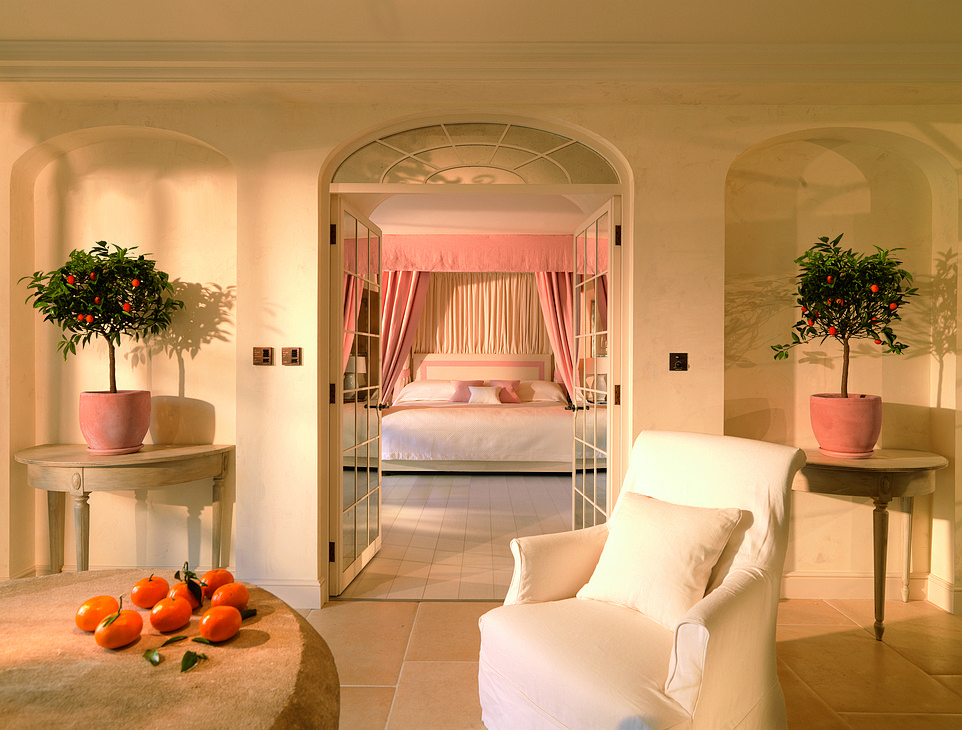 The design of each room is inspired by Mr Blanc’s travels. This suite is called L’Orangerie

It is a beautiful manor house – with a welcome as warm as its golden-Oxfordshire stone – and its success is all the more extraordinary when you consider Raymond’s own rags-to-riches story, which could be something out of a Dickens or Hugo novel.

He was born to loving but hard-up parents in post-war France with Raymond toiling with his father and siblings in the garden day-after-day from the age of six to provide Maman Blanc with the ingredients she needed to feed their family of seven.

Aged 15 he peered through the window of his local restaurant where he witnessed the theatre of a waiter flambeing Crêpes Suzette and the joy on the faces of diners – that moment, he says, ignited a life long passion for gastronomy and delighting customers. He got a job there as a cleaner, was promoted to pot-wash and eventually became a waiter before the head chef broke his jaw with a frying pan and threw him out for offering ideas on how to improve the food.

If you want to understand the philosophy of Le Manoir, you should view it through this prism of his early years (even the frying pan bit).

The hotel is not at all stuffy, with homely rooms and food so tasty and beautiful that at times it feels like you’re also being walloped with a frying pan – with many ingredients grown yards away in his celebrated kitchen garden.

In 1983, Raymond, who arrived in the UK a decade earlier with barely a word of English to work as a waiter in a pub, bought New Milton’s manor house by scraping together his life savings and help from friends and his customers at Les Quat’Saisons, his Oxford restaurant. The new Le Manoir aux Quats’Saisons opened in 1984.

Celebrating the landmark he said: ‘When I first saw the house, I fell in love with it. It was far more expensive than I could afford – and much bigger than what I was looking for. I was lucky to raise the money, and the rest, as they say, is history’. 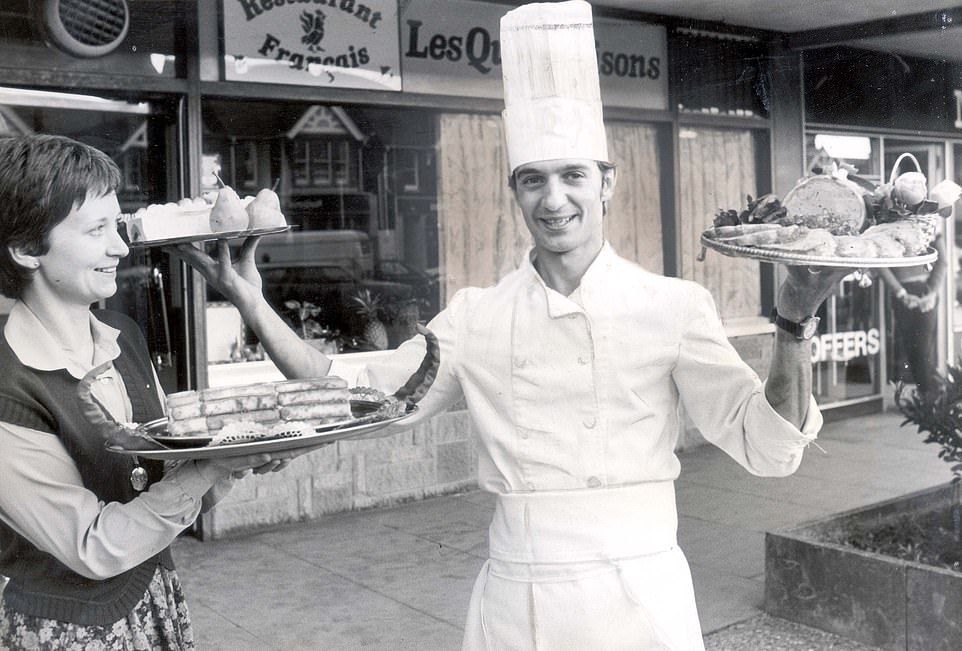 In 1983, Raymond, who arrived in the UK a decade earlier with barely a word of English to work in a pub, bought New Milton’s manor house by scraping together his life savings and with help from friends and customers at Les Quat’Saisons, his Oxford restaurant. He’s pictured here with his wife Jenny in 1978 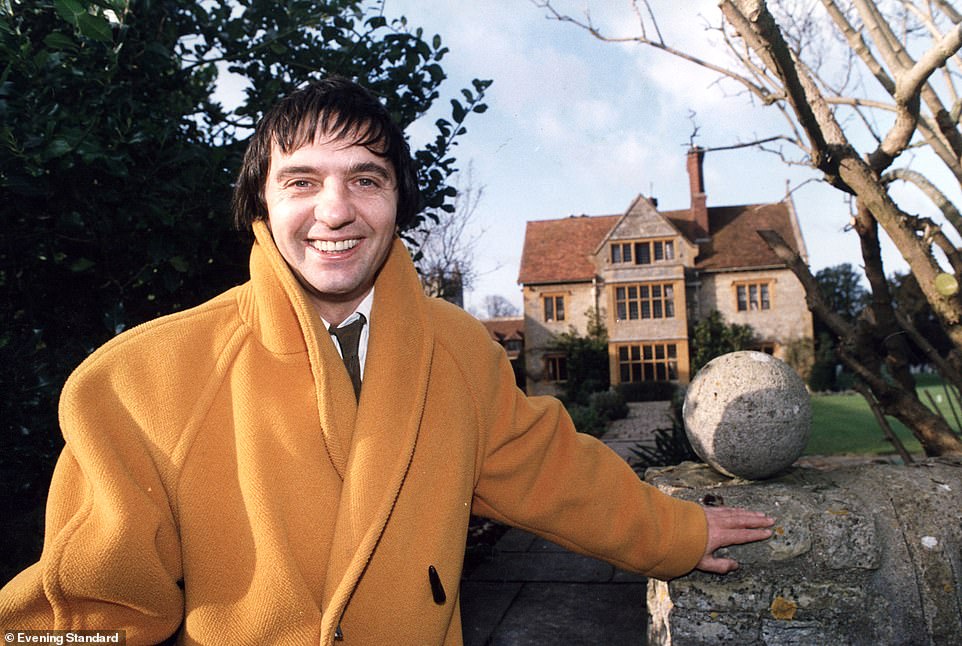 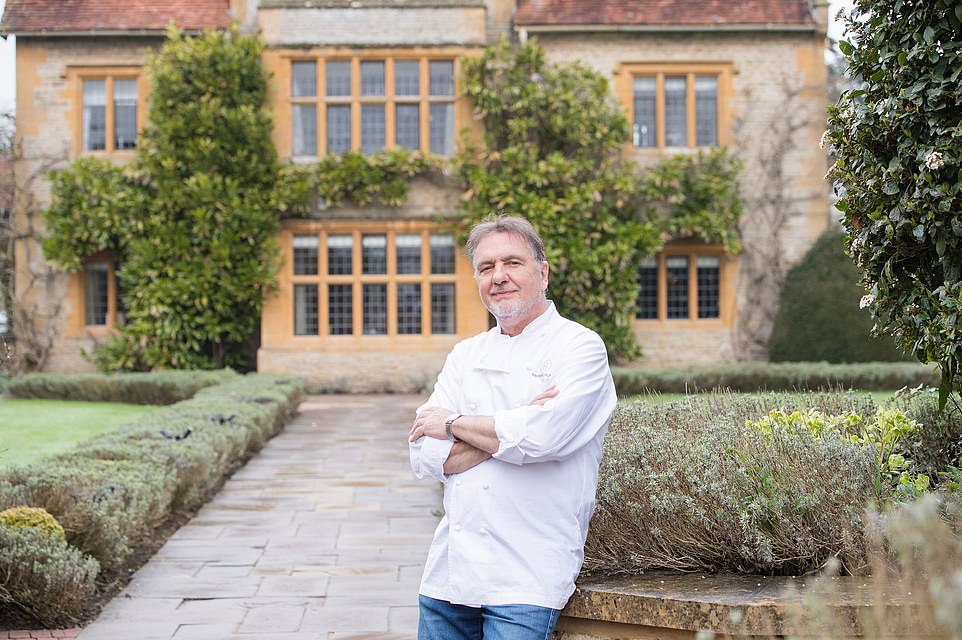 Thirty-five years on Le Manoir is considered one of the world’s finest country house hotels, where Mr Blanc remains chef-patron 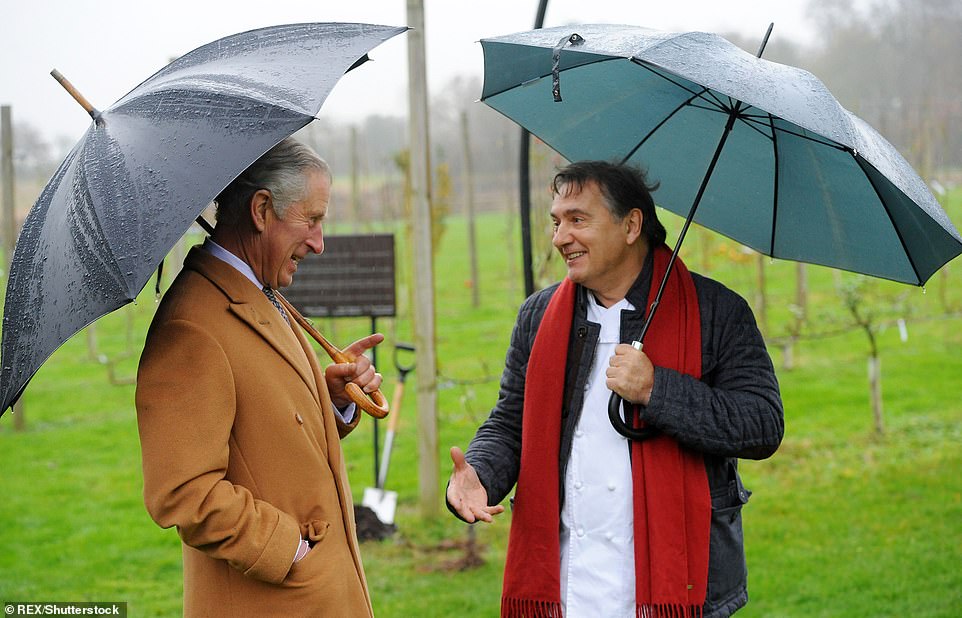 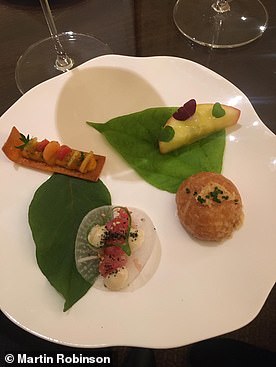 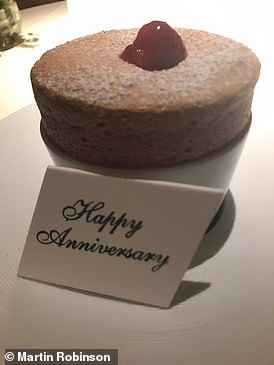 Gemma’s anniversary raspberry souffle wowed her and other diners

And every year since then it has had two Michelin Stars – an extraordinary achievement for a working-class, self-taught chef from Franche-Comté, now an OBE in Britain and the equivalent of a knight in France.

Anyway, back to our stay.

Let me begin with the staff, the wonderful staff. Never have I come across a group who appeared so excited for us to be eating and staying over with them. I believe it was genuine, too.

Megan, who took us to our room, Diana who gave us our fizz and canapés before dinner, and Valentina who served us our dinner, were all so enthusiastic about our stay – it felt like we had a personal fan club. Even a wonderful gardener seemed overjoyed to advise me on how to save my wilting wisteria and rubbed my arm as I shared a sob story about my ability to kill any vegetable I try to grow in my little London garden.

God knows what the chefs must have been like preparing all that astonishingly delicious food – I imagine the atmosphere in the kitchen run by head chef Gary Jones must be like a rammed Wembley stadium.

The food is an expression of Raymond’s upbringing and philosophy – a celebration of ingredients – and the gardens at Le Manoir that produce the majority of his vegetables and herbs. Before our meal I walked to the car to get something for Gem, I turned to see two chefs tearing down the path towards me who apologised for startling me but explained they needed to pull up more potatoes for dinner.

When we sat down, the first course to arrive was an espresso-sized shot of a deep coral-coloured seafood bisque and a seared scallop on a cocktail stick, beautifully crunchy on top and silky soft in the middle.

Next was an unctuous Cornish crab salad with coconut sorbet, kaffir lime and a zingy passion fruit jelly. It was all very cold, said Gem, but I loved it.

Next was a poached hen’s egg, topped with almost a crust of finely shaved black truffle served on a scattering of wild mushrooms and with a warm, amazing mushroom tea poured into the small bowl. It was the most delicious, turbo-savoury dish either of us had ever tasted.

Then there was an Indian-spiced monkfish with a creamy broth so tasty I ran out of bread mopping it up and was tempted to stick in the napkin and wring it into my mouth.

The sommelier then swapped my fruity Riesling for a smoking Spanish red as Valentina pirouetted in with the roasted beef fillet and braised Jacob’s Ladder (rib of beef) with a syrupy red wine sauce.

Then came the cheese – tonnes of it, most of it from the UK, delivered by the charming restaurant director Mourad Ben Tekfa on a wooden trolley so grand and large it looked like a royal barge was moored to our table.

And then there were TWO puddings – the first a coffee panna cotta and a super-smooth chocolate sorbet served with a burnt-caramel tuille with a coffee foam on top so it looked like a cappuccino.

Gem thinks chocolate ‘polluted’ with anything is wrong – so she did that thing our children, five and two, do when they promise to try something – she raised a spoon to her lips while pulling a grim face. I had to eat them both. Poor me.

I then ate a gooey almondine tart with textures of pear and a pear sorbet (all using fruit from Le Manoir’s orchard) surrounded by a satisfying moat of ginger custard. Gem had the raspberry soufflé with raspberry sorbet. It looked so tall and deep pink the family on the table opposite yelled across enviously asking how it was.

The souffle came with a beautiful handmade happy anniversary plaque made of sugar. And as you looked around every table had a person given the same or with a candle in their pud as they also celebrated a special occasion with the people they love. It was wonderful.

We then collapsed into our room, Lavande, which has stunning views of the walled gardens from its lounge and a giant bathroom with a tub big enough for a hippo. 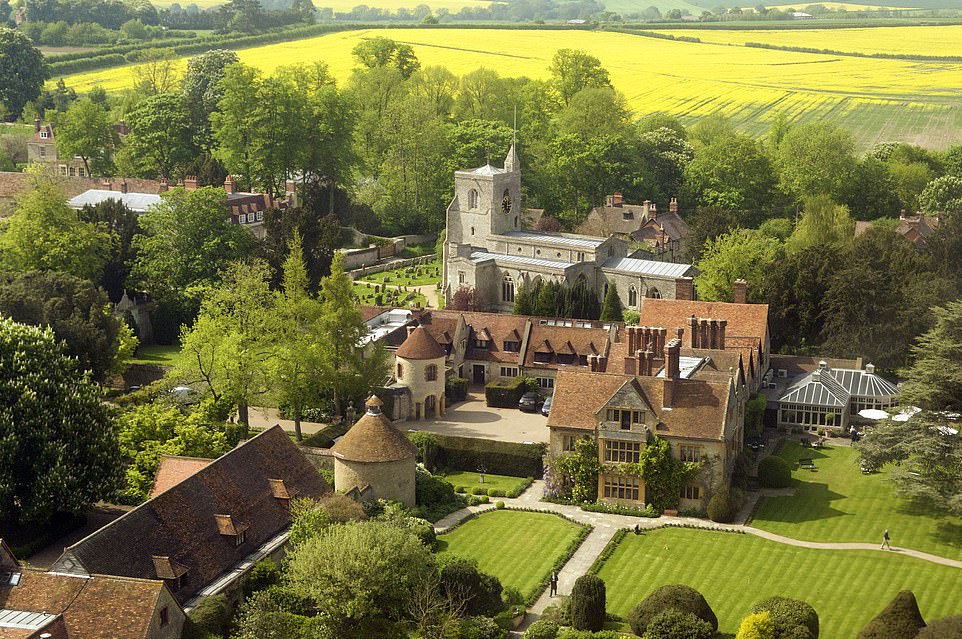 Le Manoir dominates the landscape of the village of New Milton, where many of Le Manoir’s staff also live 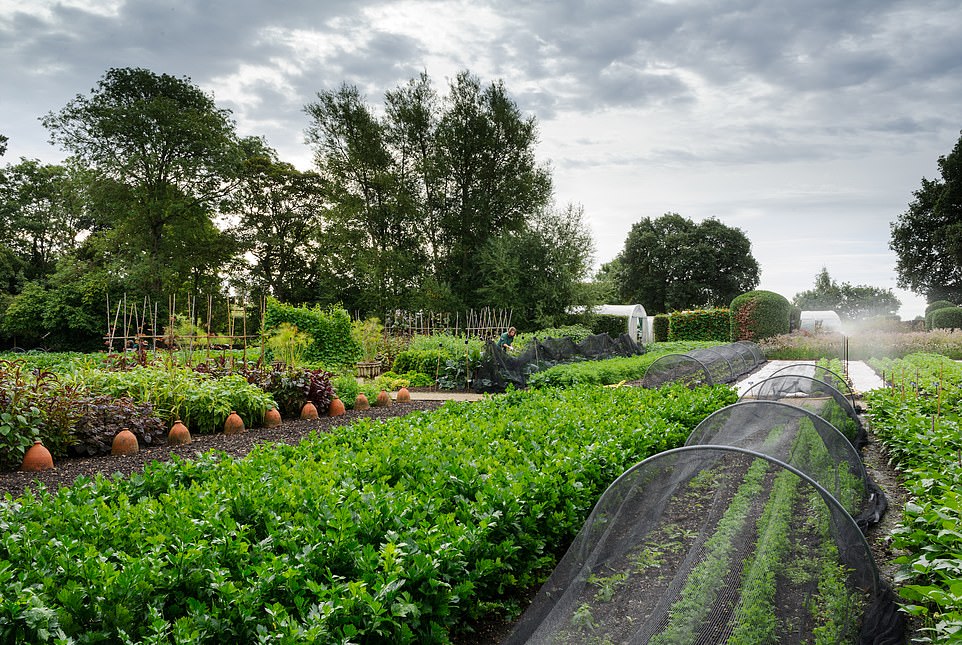 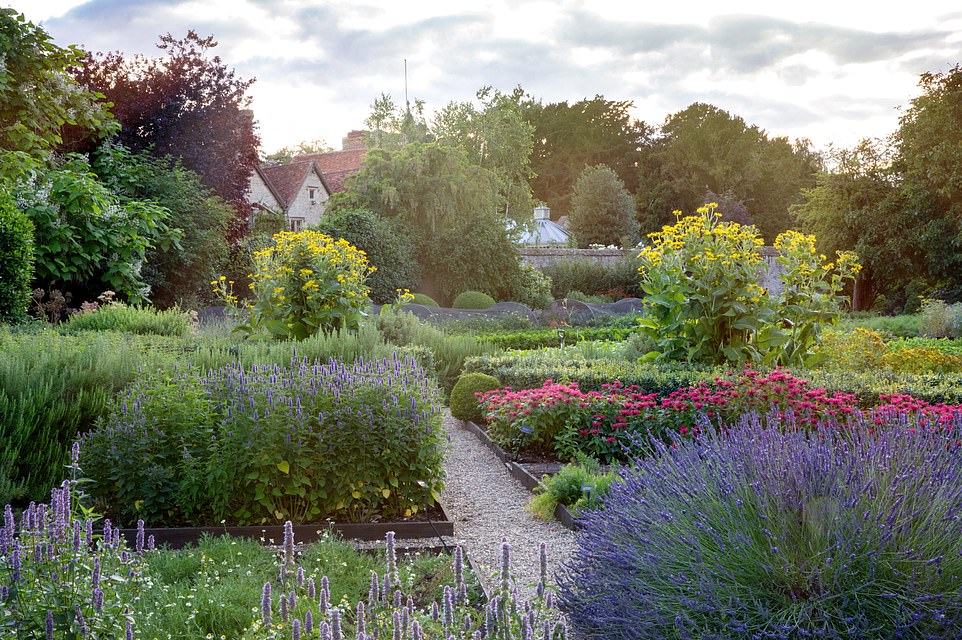 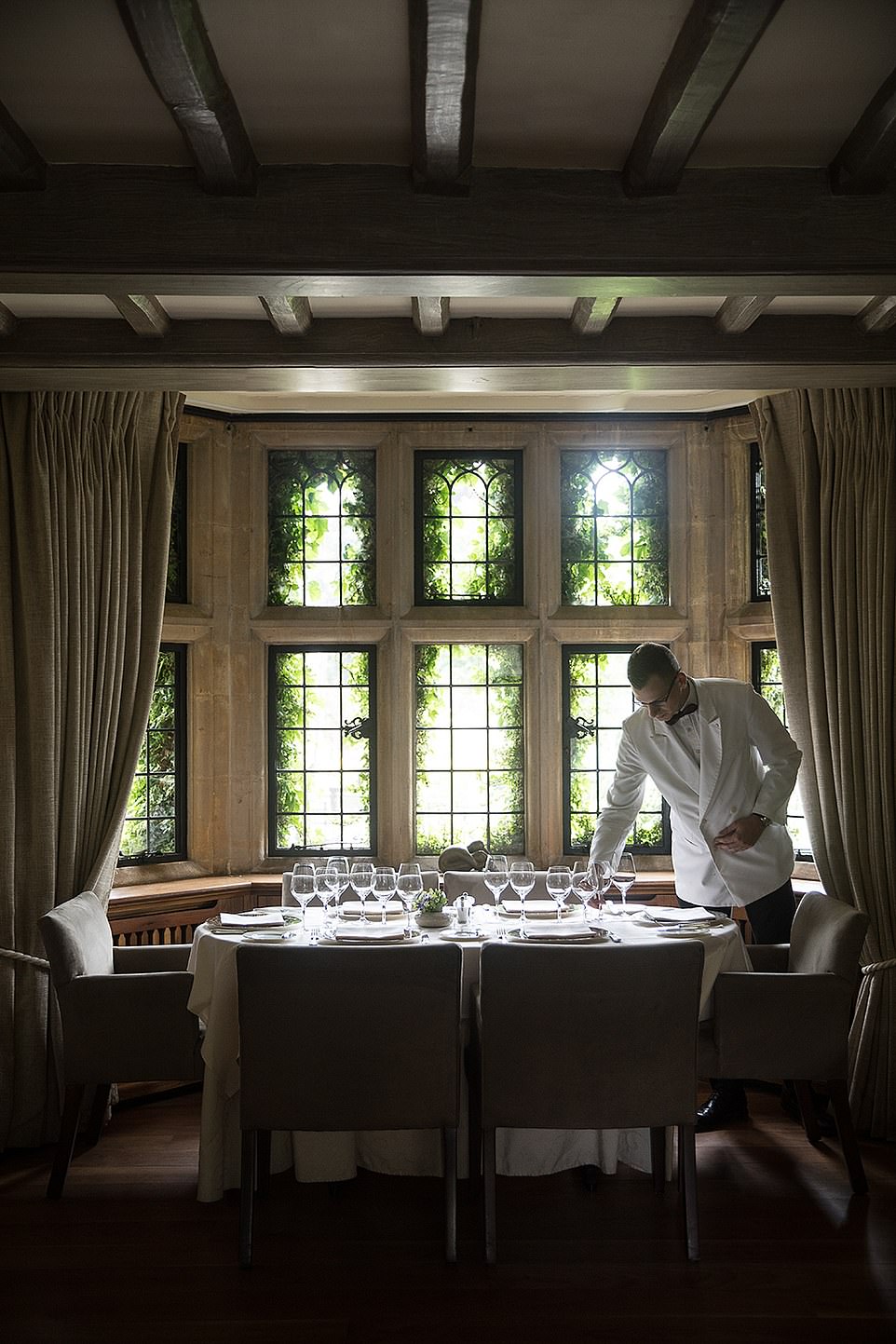 Le Manoir staff follow Raymond’s motto, that the restaurant and hotel must be of pure luxury, but also inclusive and classless 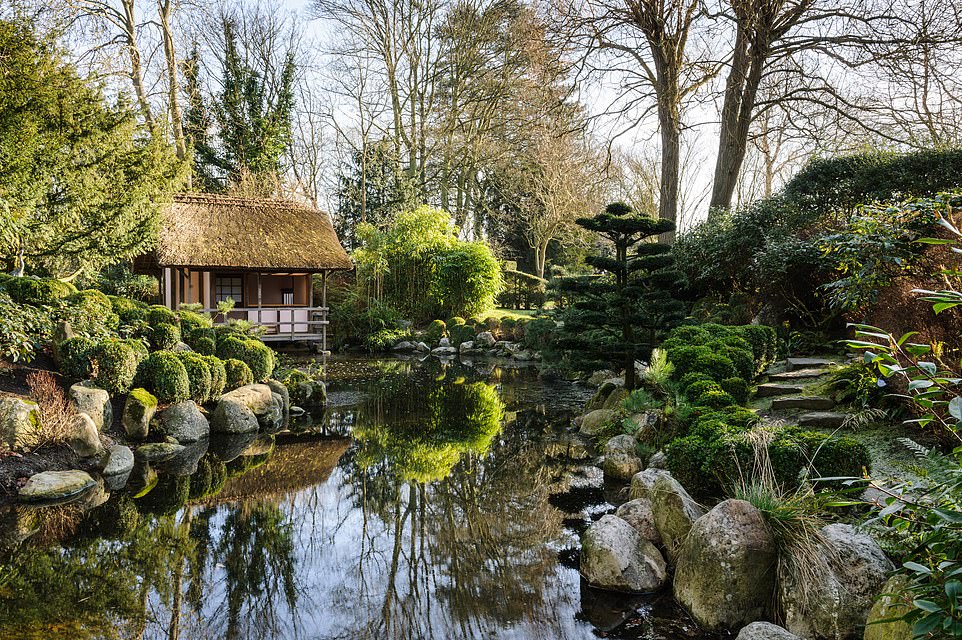 Le Manoir’s grounds include this beautiful and tranquil Japanese tea garden, which looks more like Kyoto than rural Oxfordshire 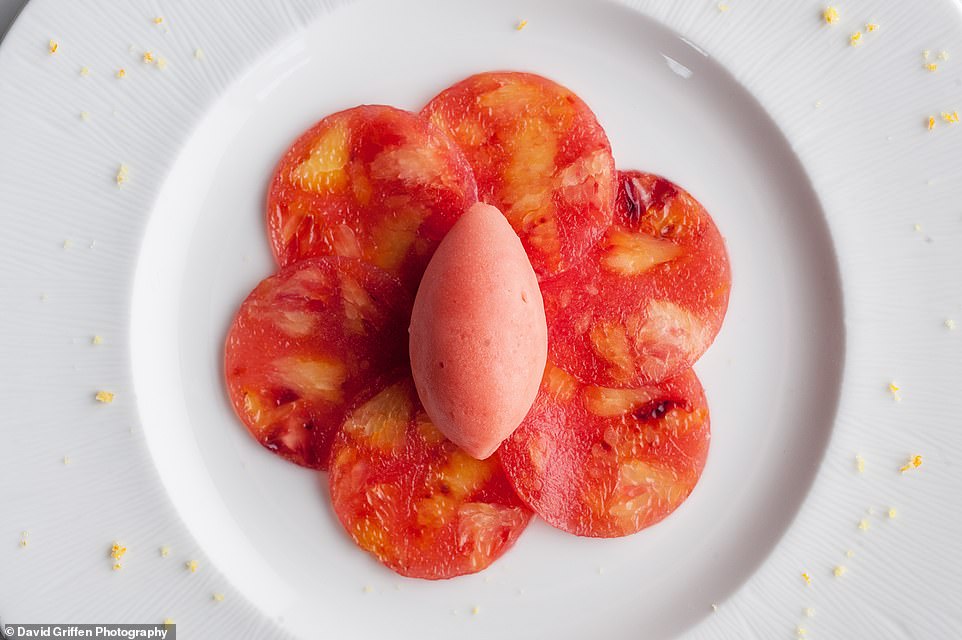 The food at Le Manoir is widely regarded as exceptional. Pictured is blood orange carpaccio 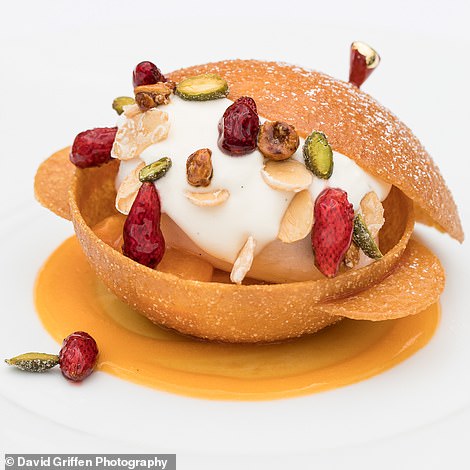 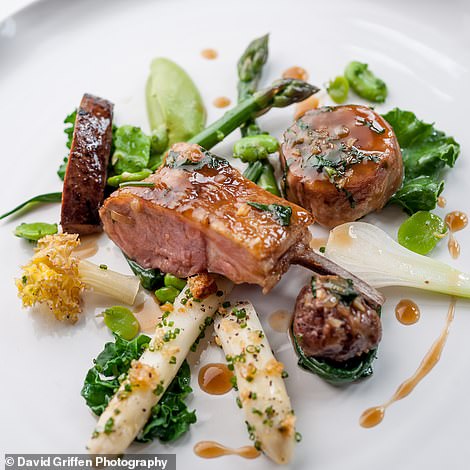 Le Manoir’s website boasts that it is ‘a must-visit dining experience for gourmands across the world’. Few would disagree 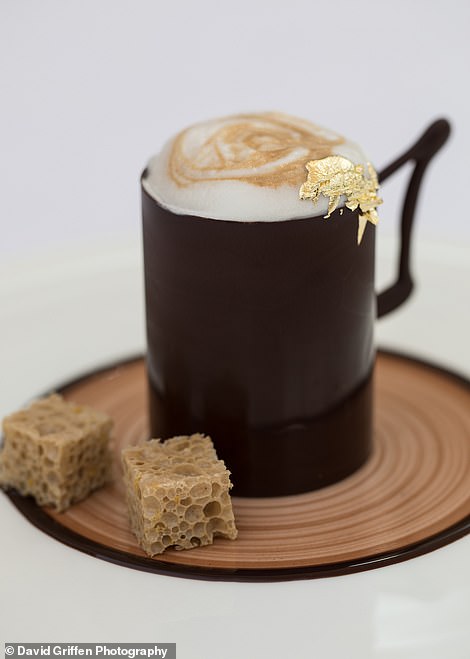 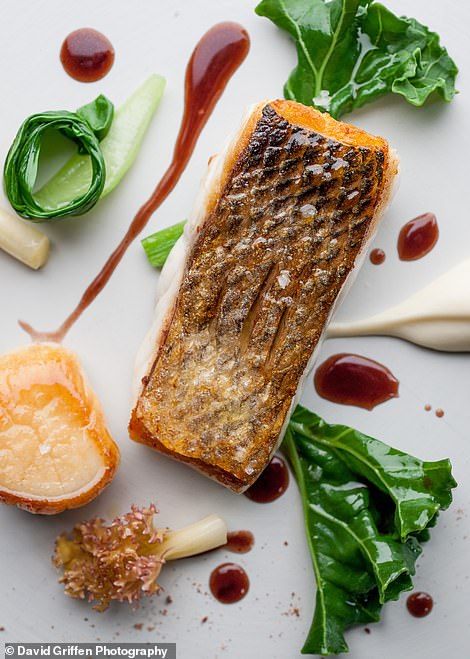 One of Mr Blanc’s signature desserts is the one pictured above left, which consists of a cup made entirely from chocolate. On the right is sea bass with scallop and smokey mash, and red wine jus 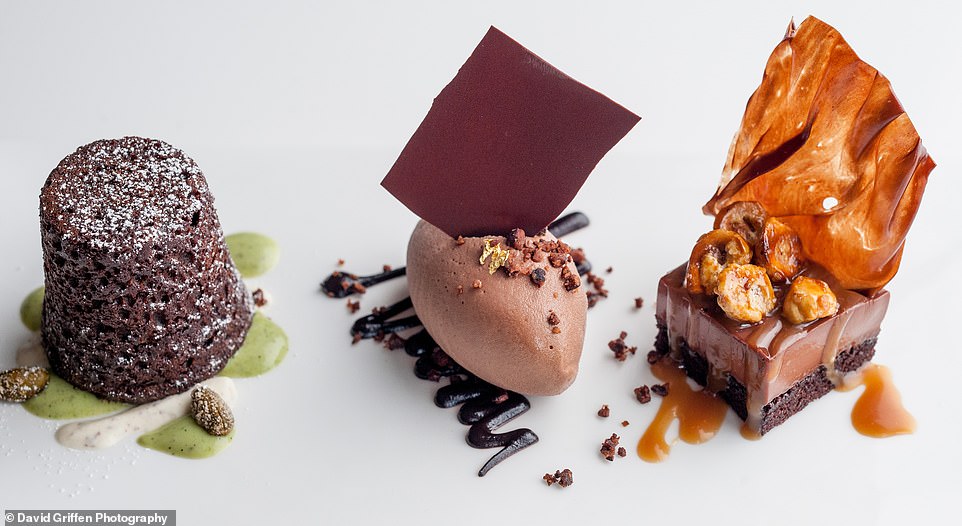 A sensational chocolate dessert. If you fancy learning how to cook Raymond Blanc-style, then sign up to Le Manoir’s cookery school

Before I visited Le Manoir three things popped into my mind: Raymond Blanc, its kitchen garden and a reputation for costing an arm and a leg.

But you can eat for less at Le Manoir if you come for a set lunch, or choose fewer courses at dinner – or even pop in for a pot of tea sourced from around the world (including an extraordinary Cornish Assam) by Raymond himself, although admittedly even that is a tenner – but it did come with giant slabs of delicious iced lemon cake.

I don’t attempt to justify it – only to say that on October 17 there were 47 people there for dinner and looking around at their faces, and hearing the gentle rumble of excited chatter and laughter throughout the evening, we were all gaining memories with people we love that will last a lifetime. 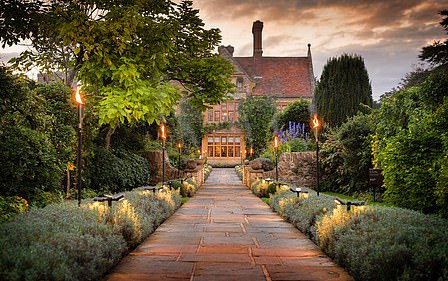 A Taste of Belmond Le Manoir – an indulgent mid-week break that includes luxury accommodation and a five-course dinner, followed by English breakfast the following morning – is available from Sunday to Wednesday night inclusive, subject to availability. It costs £830 per person. For more information visit Belmond Le Manoir aux Quat’Saisons’ website here or phone +44 (0) 1844 278 881.

As part of its 35th anniversary the hotel is running a series of special events in the coming month:

Photograph of the week: Hildesheim, Germany – A Luxury Travel Blog