Home » Travel » Inside one of Budapest's most Instagrammable hotels

Inside Budapest’s grand chandelier-festooned ‘Mystery Hotel’, which evokes past eras of prosperity but adds modern-day twists, from optical illusions to quirky art

People visit Budapest for all sorts of reasons. For the unrivalled spas. For a cruise down the Danube. For the astonishingly cheap food and wine. For the Christmas markets. And for the history.

Even if you’re on a stag or hen do, set on bulldozing the city’s famous fortified fruit brandies, you still can’t help noticing its history.

It’s a city that dates back to Roman times and has constantly endured upheaval, conflict and catastrophe. In just the last century, all its iconic bridges were bombed in the Second World War, and its famous 1956 uprising sought to wrench the city free of Soviet shackles. 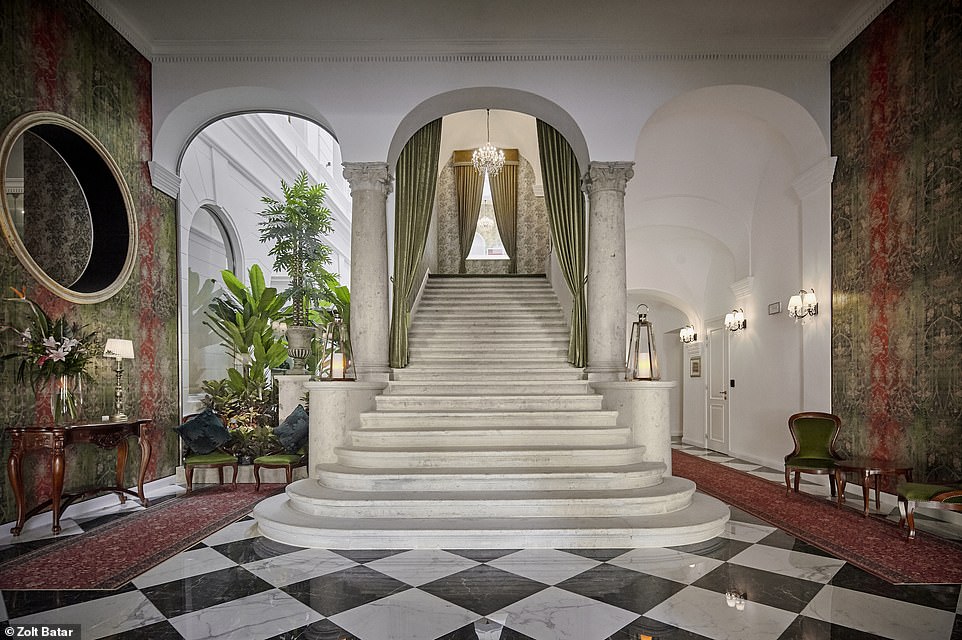 The main staircase at the entrance of Mystery Hotel Budapest. The hotel is located inside a building that was originally the 19th-century headquarters of the Hungarian Freemasons

Whatever brings you here, it feels proper to stay somewhere that acknowledges something of that history. The Mystery Hotel certainly does that.

You step off a fairly unremarkable street into something positively palatial. Though newly opened in 2019, the hotel lovingly evokes past eras of prosperity: plush velvety curtains and Corinthian columns extend from high ceilings to an impeccably polished checkerboard floor.

This was originally the 19th-century headquarters of the Hungarian Freemasons. Were it not for the bright electric lights and elevators you could almost imagine you’ve been cast back in a time machine, surrounded by all the elegant fixtures of the premises back then.

The bedrooms are just as grandly appointed, with more pillars and curtains amid luxuriously-textured wallpaper: the kind calling out for you to stroke. 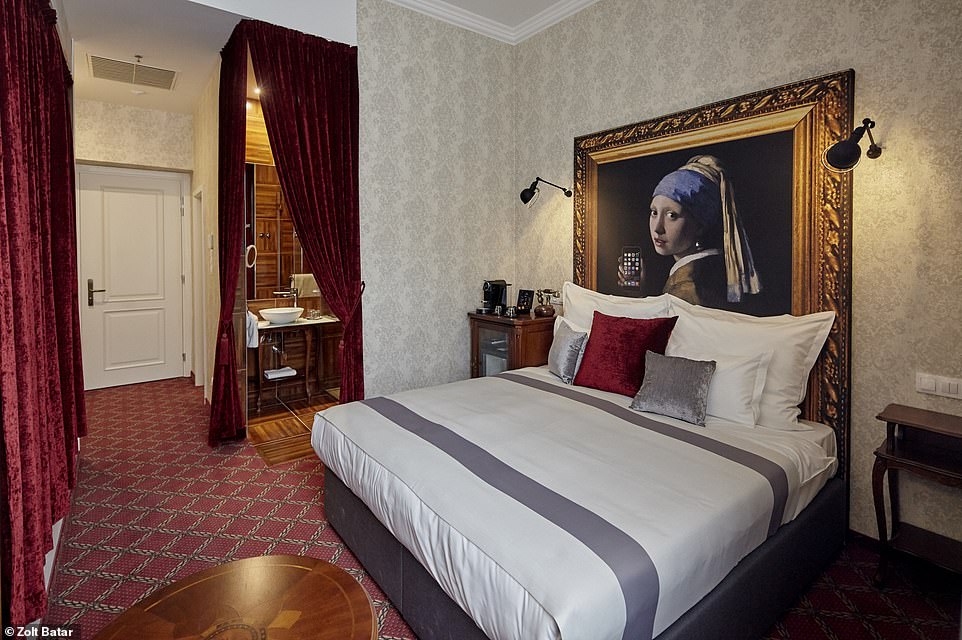 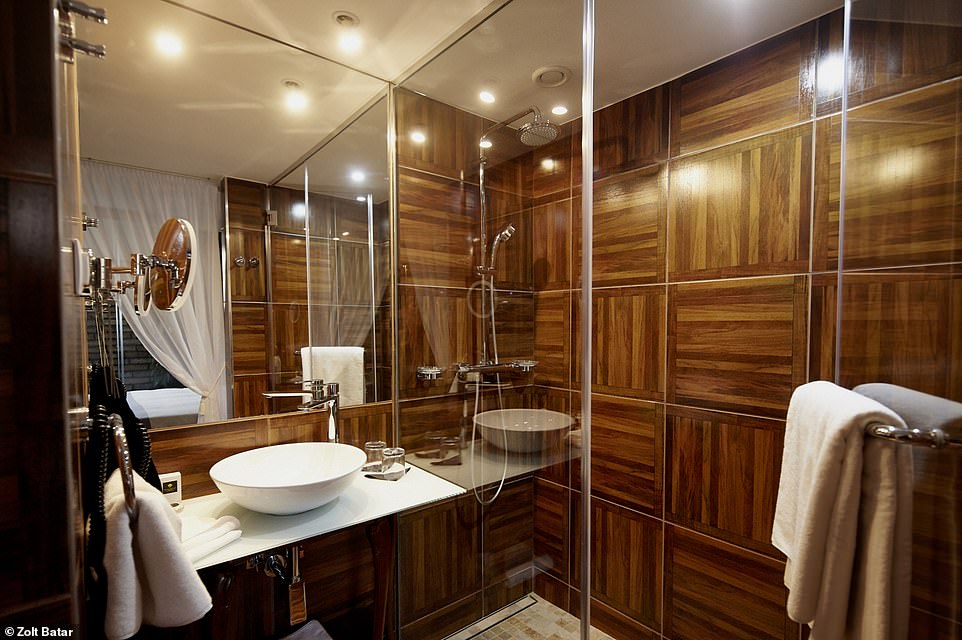 One of the bathrooms at Mystery Hotel Budapest. James says the hoteliers ‘have added a touch or a twist to remind us we’re in the 21st century and Budapest isn’t a city mired in its past’

And did I mention the chandeliers? The foyer has several but then so do the bedrooms. Wherever there’s a light fitting, it’s dripping with little glass droplets.

Getting a cab back to the hotel after a night on the tiles, I found myself telling the driver ‘it’s the one with the chandelier’ because indeed this signature flourish also distinguishes the entrance, with an enormous blazing chandelier hanging above the front door.

If all this is starting to sound a little too rococo for your tastes, hold on. At every turn, the hoteliers have added a touch or a twist to remind us we’re in the 21st century and that Budapest isn’t a city mired in its past.

In the foyer, there’s an optical illusion which – even once you’ve made sense of it – still beguiles the eye. A long Persian rug leads to the welcome desk then seemingly right through it: till you realise the front of the desk is a giant mirror. Look again, and the same rug seems to extend across the ceiling above you. Another mirror? No, this time it’s a replica, suspended above you. 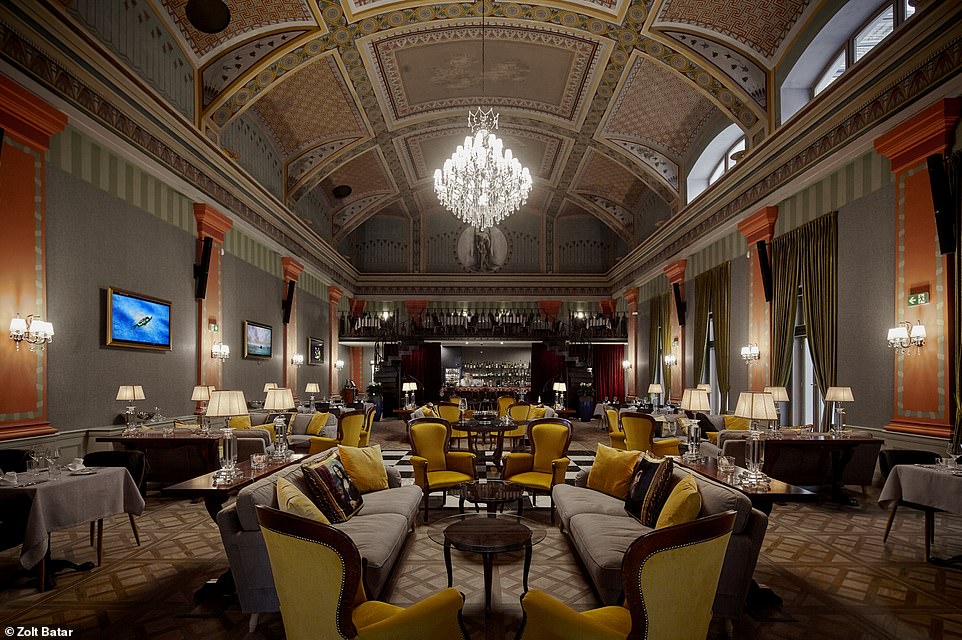 James says the hotel’s most spectacular feature is the lavishly restored ballroom where breakfast is served, pictured 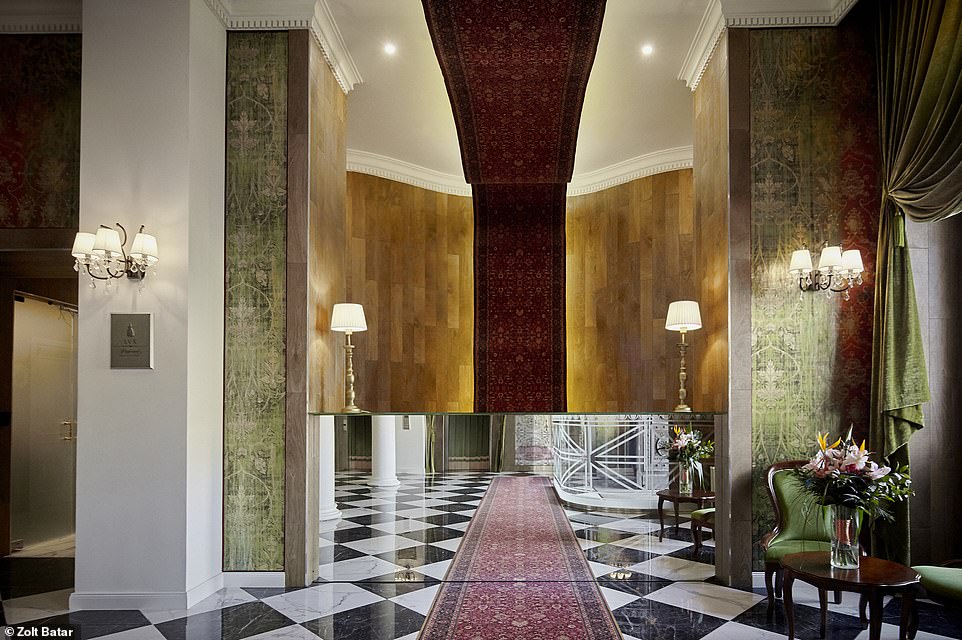 The hotel’s reception desk, pictured, features an optical illusion thanks to a giant mirror that James says ‘beguiles the eye’ 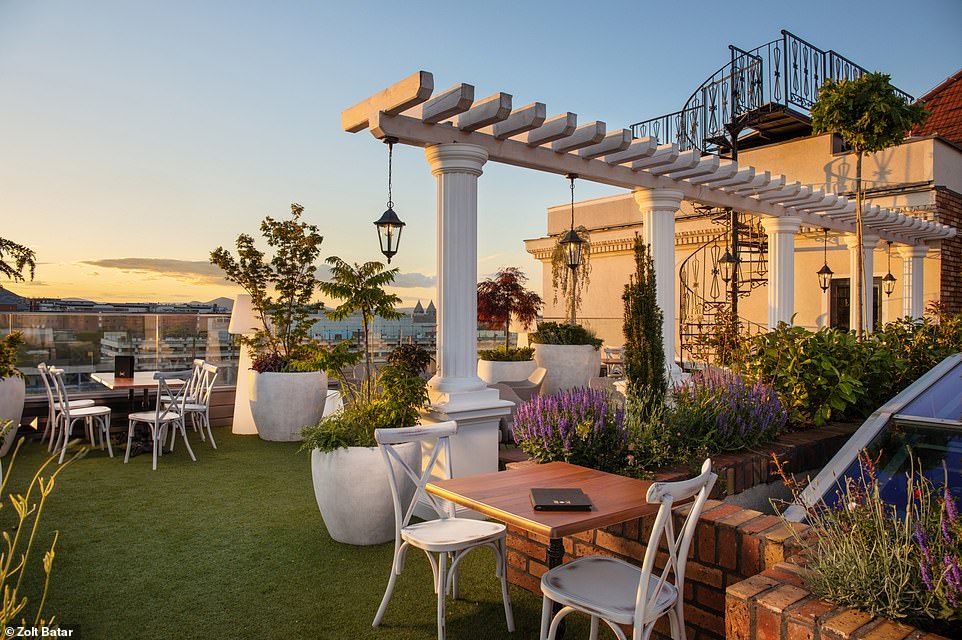 The hotel has a multi-columned rooftop bar, pictured. James says the hotel is one of the most Instagrammable he has visited in some time 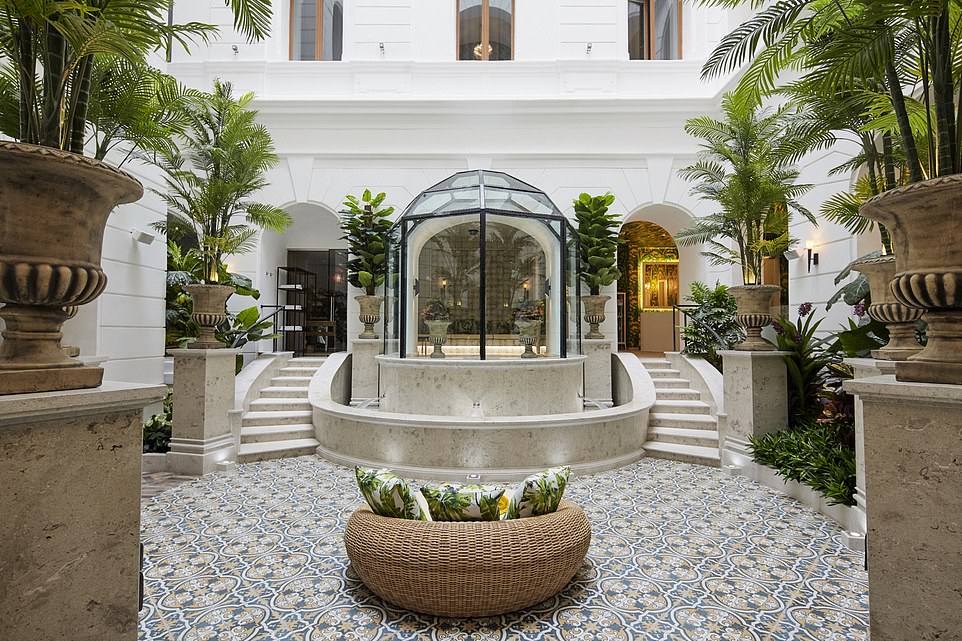 James says that the hotel ‘is very commendable, sure to add some elegance, comfort and character to your time in Budapest’ 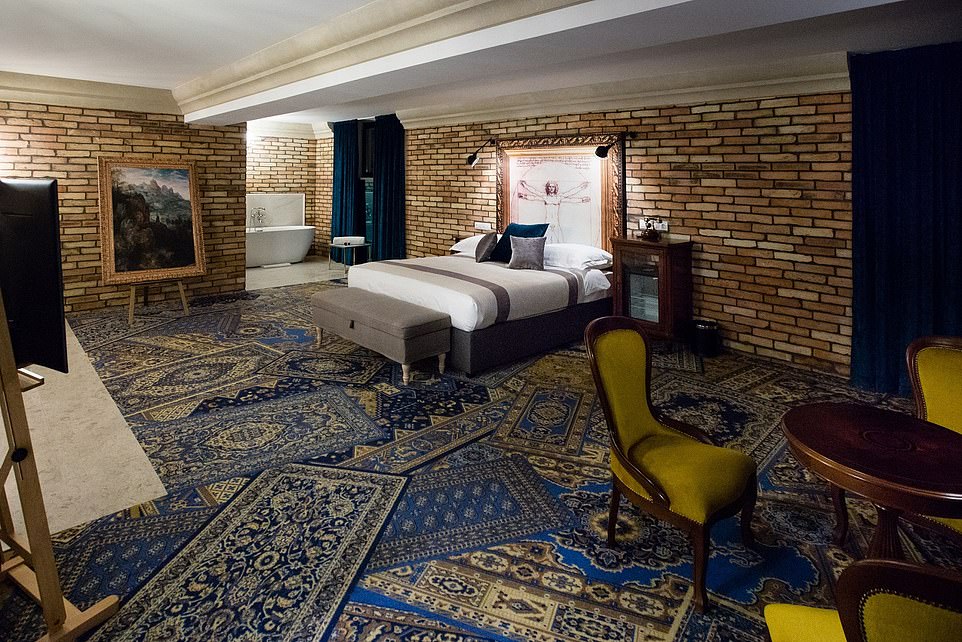 All the bedrooms are well-appointed – with the one pictured an eye-catching mixture of exposed-brick walls, kaleidoscopic carpeting and funky furniture 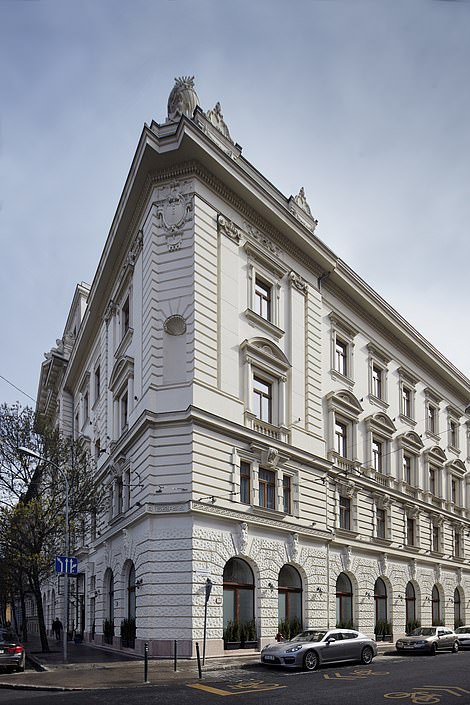 Throughout the hotel there are reproductions of great paintings, but each has an embellishment: in the hallway, the Mona Lisa has all the accessories she needs for a weekend at Glastonbury or whatever Budapest’s equivalent may be. Meanwhile, above my bed, Vermeer’s most famous model is taking a selfie.

Doubtless such touches are intended to get you taking selfies yourself, and – with its multi-columned rooftop bar and swish, palmed spa nestling within a vast atrium – it’s the most Instagrammable hotel I’ve visited in some time, compelling you to keep fishing out your camera.

Indeed, that seems to be the aspiration with all the Preferred Hotels and Resorts, of which the Mystery Hotel is a member.

On this note, its most spectacular feature is the lavishly-restored ballroom where breakfast is served.

The stylish décor is reflected in several bauble-like cloches under which sit hillocks of bacon, sausage and eggs, alongside a kingly array of hams, cheeses, fruits, breads and preserves. If you’re visiting in winter, as I did, there’s a temptation to stay here on the amply-cushioned sofas and make breakfast last all day.

When it comes to venturing out, while the main station is very close, some of the city’s most appealing attractions – its funky ruin bars, the festive markets and the bustling Gozsdu Passage full of alluring restaurants – are a good ten-minute trot away.

Nonetheless, there’s something to be said for escaping the throngs of tourists back to your personal palazzo. Plus, you’re on the right side of town for the resplendent Széchenyi thermal baths in the nearby park.

There’s no mystery then: this is a very commendable hotel, sure to add elegance, comfort and character to your time in Budapest.

James was hosted by Mystery Hotel Budapest, which is located on Podmaniczky utca 45. Rooms start from 111 euros (£98) per night. For more information visit mysteryhotelbudapest.com.

Ask the Captain: Can you fly over hurricanes? If not, how do you fly around them?

This swanky new hotel in Las Vegas is for adults only

Flights: Never pack this unlikely item in hand luggage this Xmas – it could spark trouble

The 'Door to Hell' and Earth's other mysterious places