Student Alex Hendriks expected lifeless desolation when he visited the centre of the Chernobyl disaster zone in northern Ukraine with his friends.

And while it was certainly bleak – it was far from lifeless inside the radioactive ruins. There were hundreds of dogs roaming around. 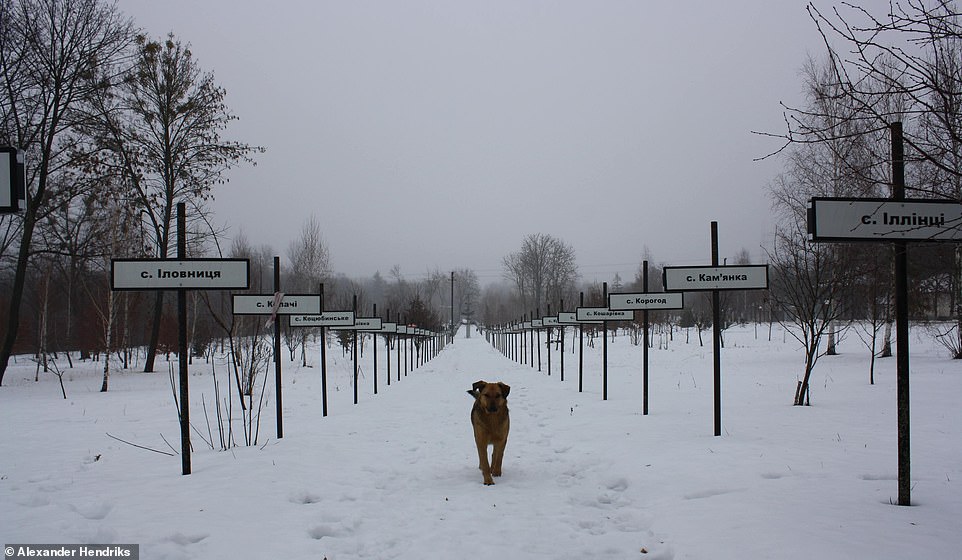 Alex discovered that Chernobyl is now home to hundreds of stray dogs. Above, a hound pads through the snow between a memorial naming the towns that had to be abandoned because of the nuclear disaster 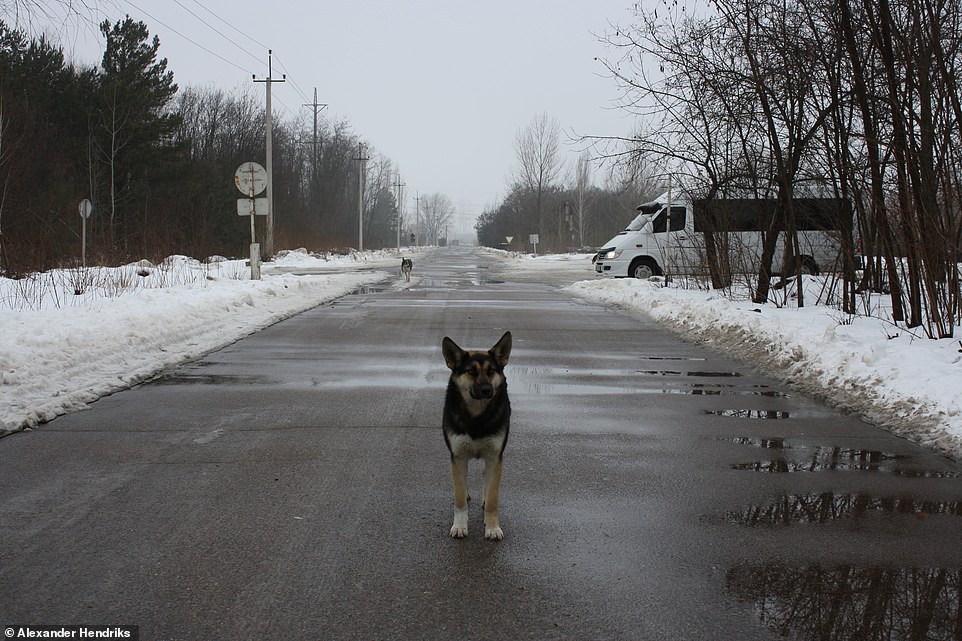 A dog comes to a halt in the middle of the road, unwilling to travel any further into the Exclusion Zone with the students 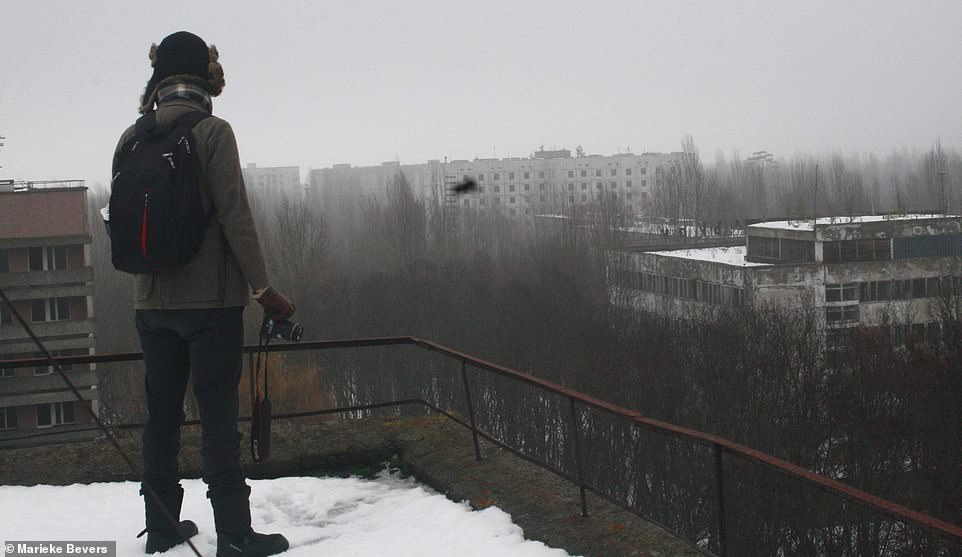 Student Alex Hendriks visited the centre of the Chernobyl disaster zone in northern Ukraine with his friends. Above, he looks across the unsettling city from a rooftop

They entered the 1,000-square-mile Exclusion Zone, which includes the city of Pripyat, on a bus operated by tour company Gamma Travel, having been picked up in Kiev, and this bus then drove them around parts of the zone close to the reactors for the entire day.

Tourists enter the inner part of the site – the Chernobyl Exclusion Zone – through two check points that are 30km (18.5 miles) and 10km (6.2 miles) from the centre of the reactor.

You go through them both as you approach the reactor. They are used as a means of tracking how close to the reactor you are and who is in what section of the zone. 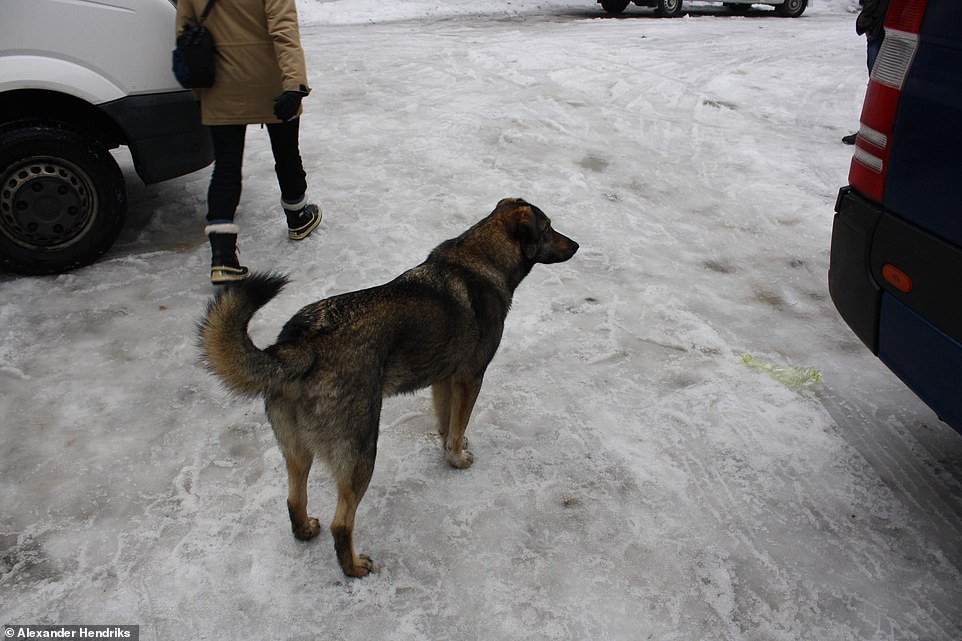 One of the dogs followed the group as they made their way out of the zone. There are over 250 dogs alive inside the Exclusion Zone and they can be found in nearly every area of the accessible site. These dogs are the descendants of pets left abandoned by the former residents 35 years ago 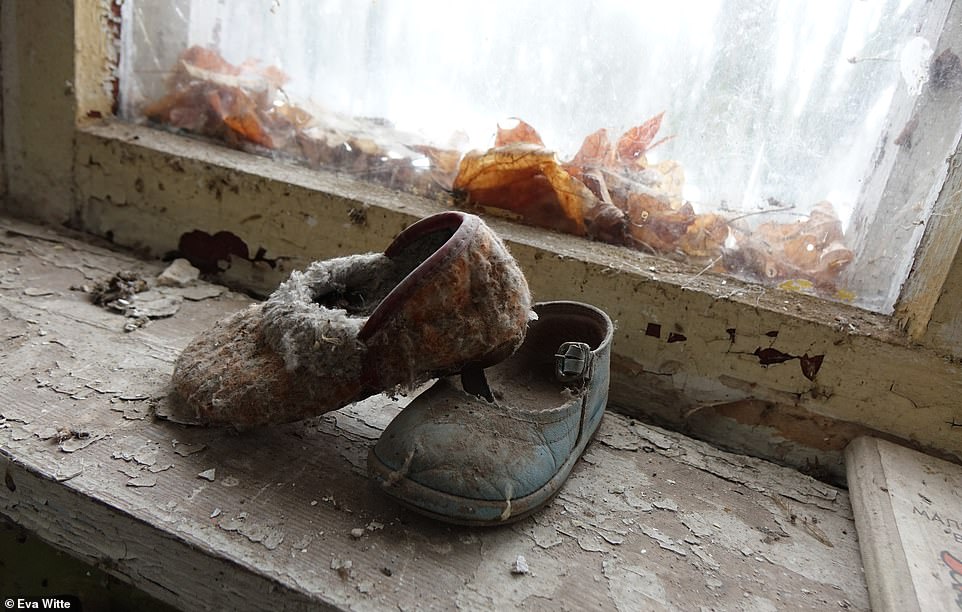 A pair of children’s shoes rest covered in dust on a windowsill abandoned by their owner in a hurry, never to be worn again

Once inside, there’s no time limit for the stay – but you’re not allowed to sleep in the zone.

There’s no dress code, apart from the stipulation to wear long sleeves as protection against the radiation.

But visiting the zone is not dangerous.

Irradiated topsoil has been scrapped away and visitors are advised to rent Geiger Counters, which will warn them if they stray into an area of high radiation. 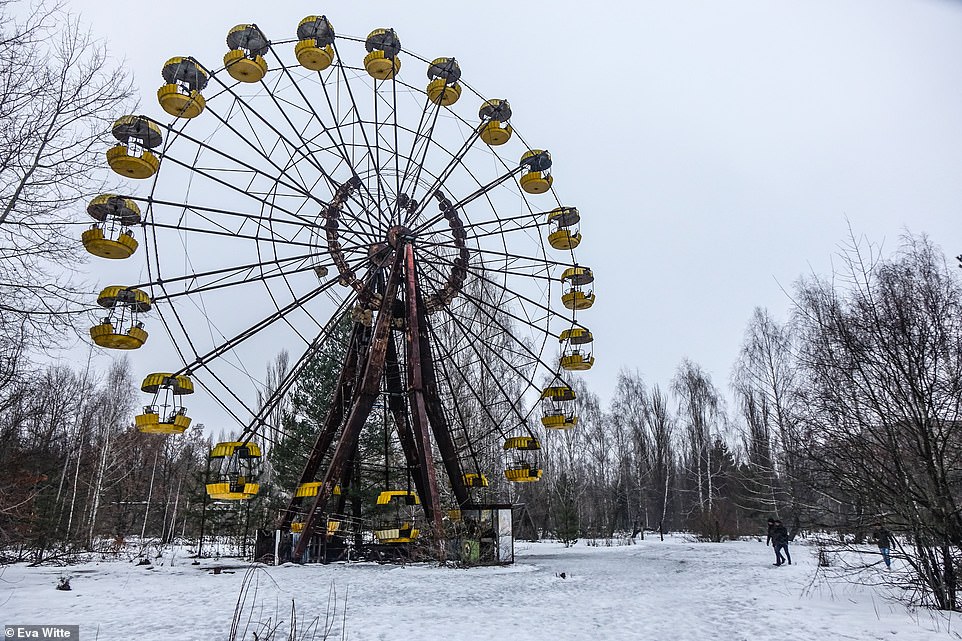 One of Pripyat’s most recognisable landmarks is the Ferris wheel. The ride was due to be opened on May 1986 but it never had the chance as the reactor exploded the month before 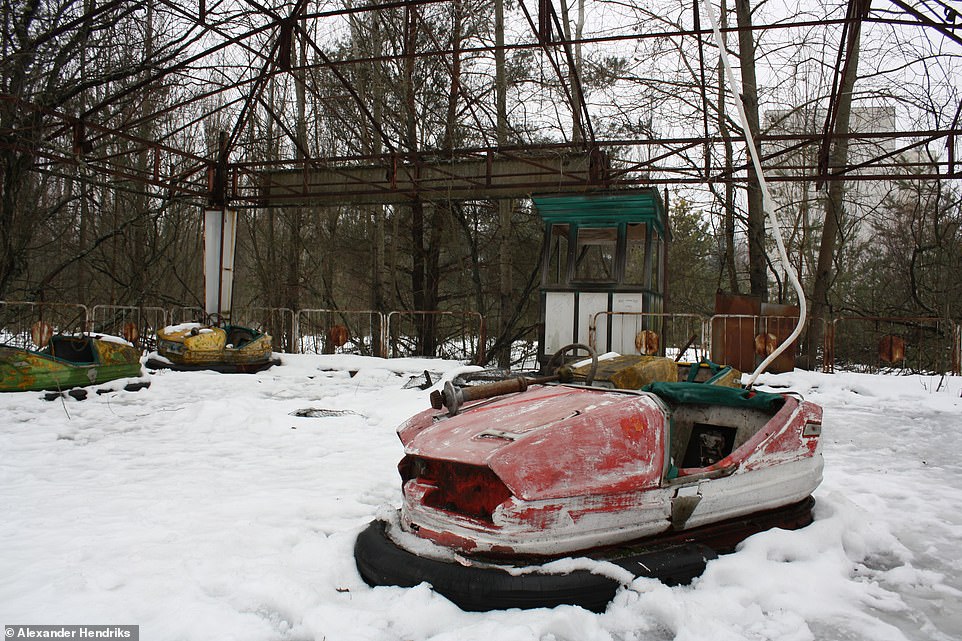 The counters start ticking at low levels of radiation (around one millisieverts). Typically anyone in a city like London is exposed to around 0.2 mSv per day. But a day in Chernobyl exposes you to around the same amount of radiation as being on a long-haul flight for one hour and 3,000 times less than a CT scan.

Once Alex passed through the first checkpoint he was greeted by a number of semi-wild hounds.

These dogs are the descendants of pets left abandoned by the former residents 35 years ago.

Alex, from the Netherlands, said: ‘It blew my mind. A lot of people either moved away or the people that stayed, stay inside.

‘It’s like dogs have taken over everything. For the checkpoint soldiers they act as companions, alerting the guards if any wolves come too close.’

Checkpoints are often visited by dogs because they know they might get some food.

And dotted around the site are water bottles that have been converted into collection pots so that people can donate money to make sure the dogs are fed.

Charities have even established funds to ensure the dogs are protected.

The Clean Futures Fund (cff) has an online page dedicated to the issue.

Cff estimates that there are over 250 dogs alive inside the Exclusion Zone and they can be found in nearly every area of the accessible site. 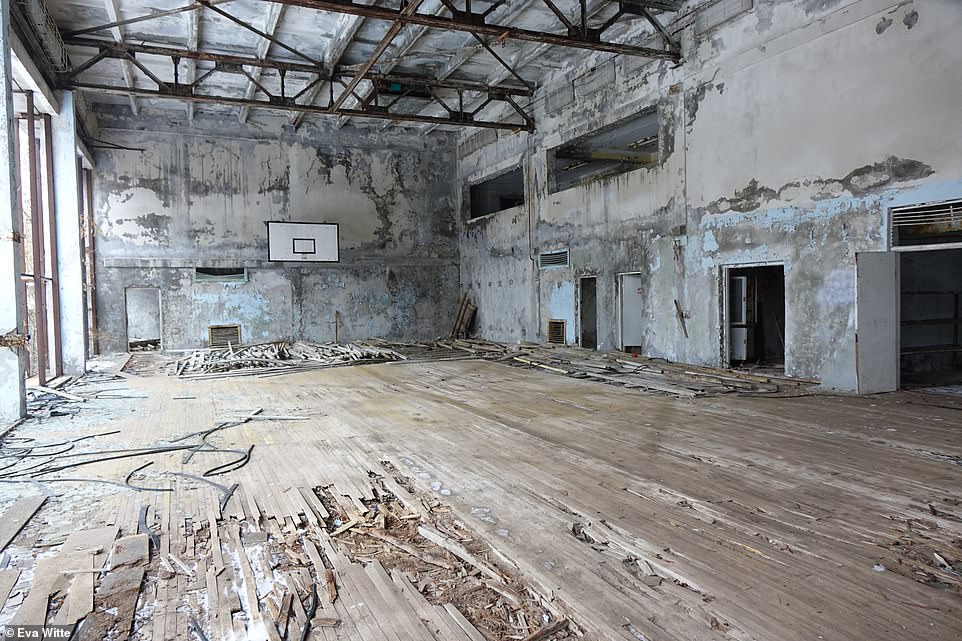 A glimpse inside a tattered basketball court in Pripyat. Its wooden floor has been torn apart from years of exposure to harsh weather 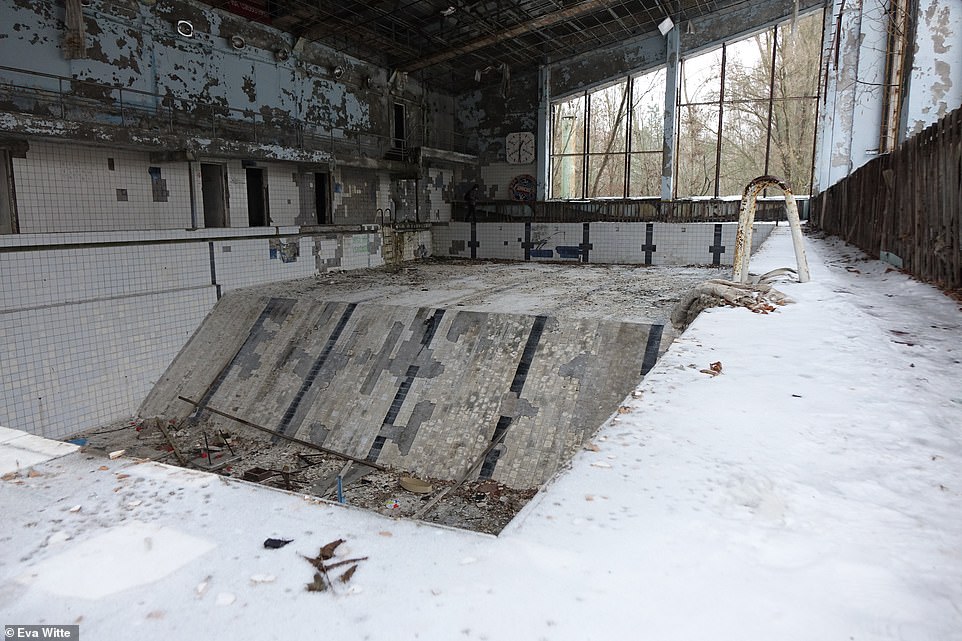 Debris gathers in the deep end of the derelict swimming pool in Pripyat, with the mosaic tiling slowly crumbling 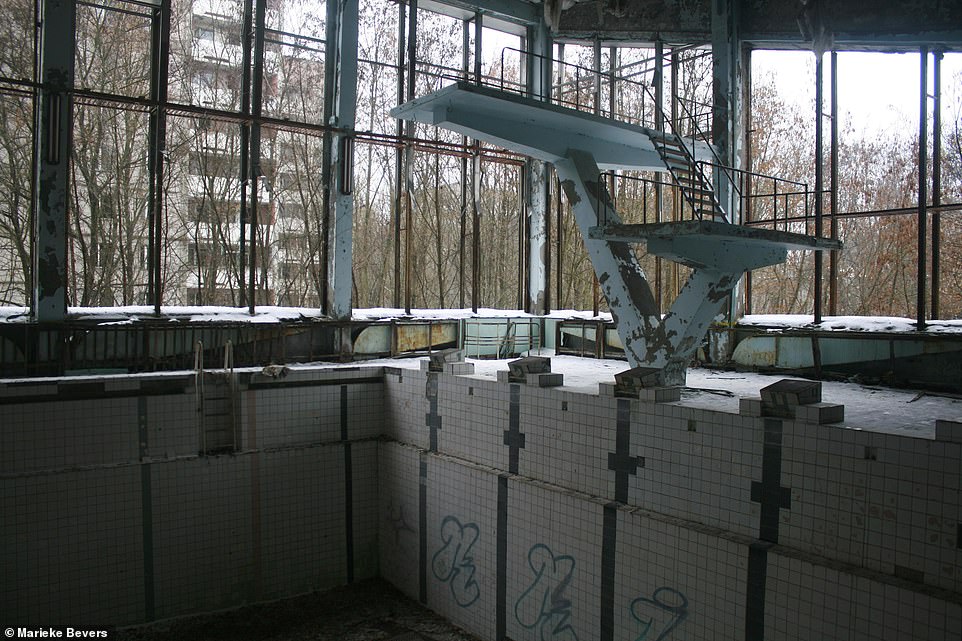 Despite losing some of its paint, the diving platform still stands proud amid the decay 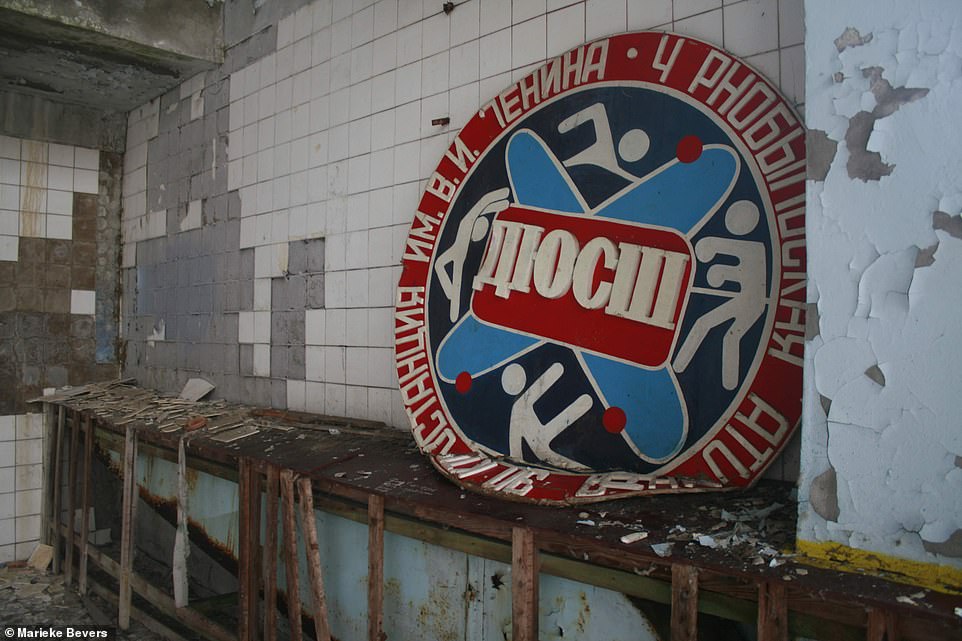 A sign for the swimming baths sits forgotten at the back of the hall, its colours unblemished by age

Most of the dogs are driven out of the woodlands and back into the ruins by wolf packs from the forests.

The intrepid tourist explained: ‘After the last checkpoint, you really felt that you had entered the darkness, not to exaggerate but it was the last time you felt 100 per cent safe.’

The Chernobyl disaster occurred on 26 April 1986 – and it ranks as one of the biggest nuclear catastrophes in history.

But the abandonment of the town by humans has created one of the most diverse animal sanctuaries in the world, mixed with some of the most striking scenery.

The initial explosion in the No. 4 nuclear reactor at the Chernobyl Nuclear Power Plant killed two people with a further 29 dying days later from acute radiation poisoning.

Greenpeace says that 200,000 more deaths were caused by the effects of nuclear fallout. 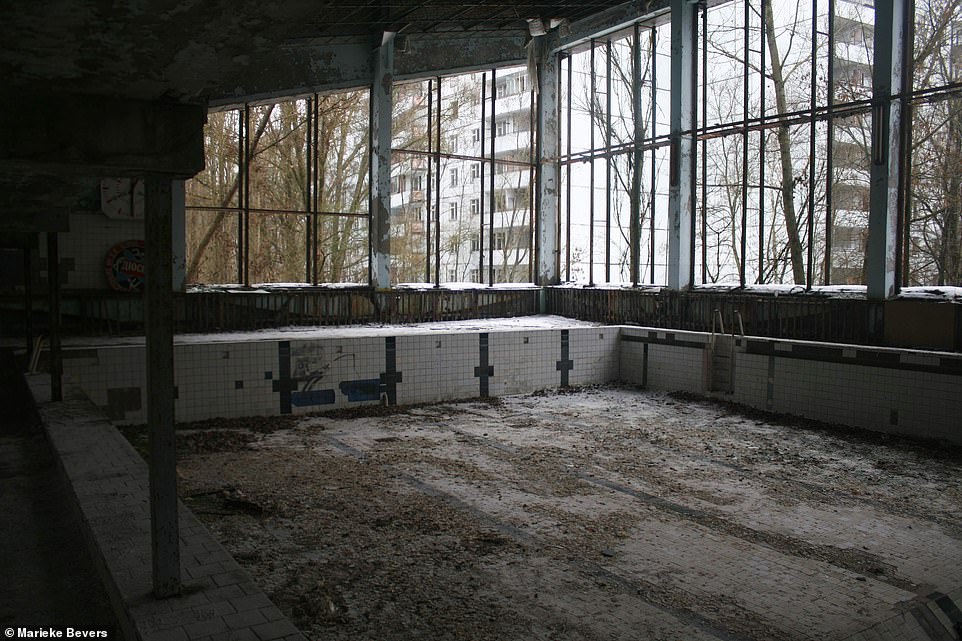 Light streams into the swimming baths from the broken windows, highlighting what remains of the white tiles 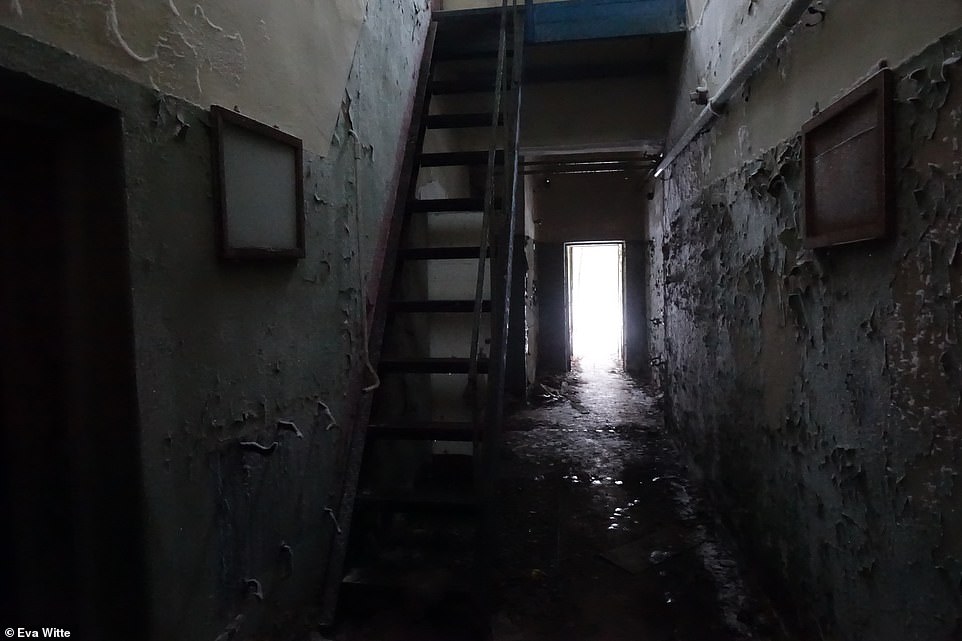 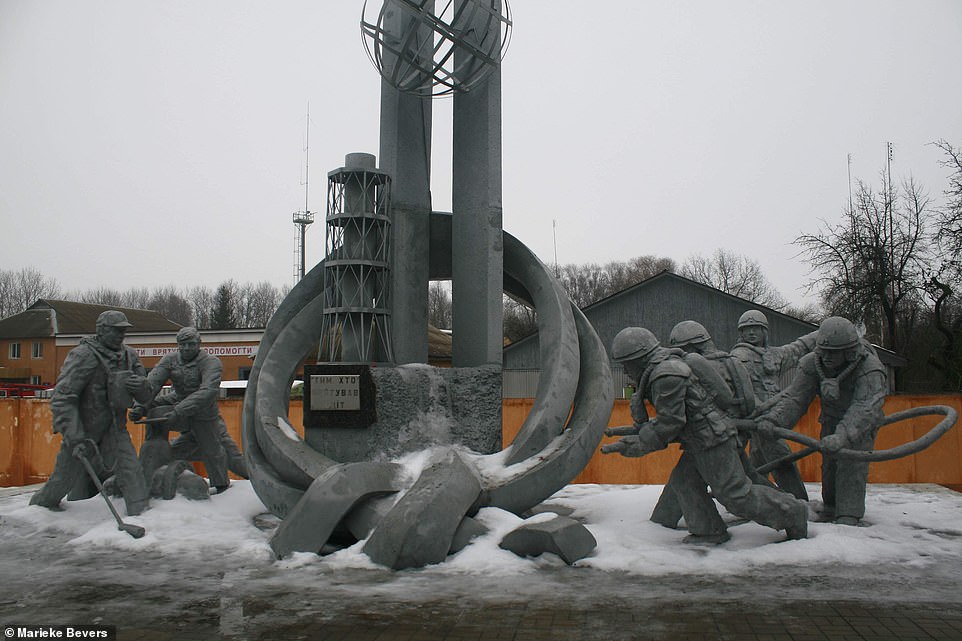 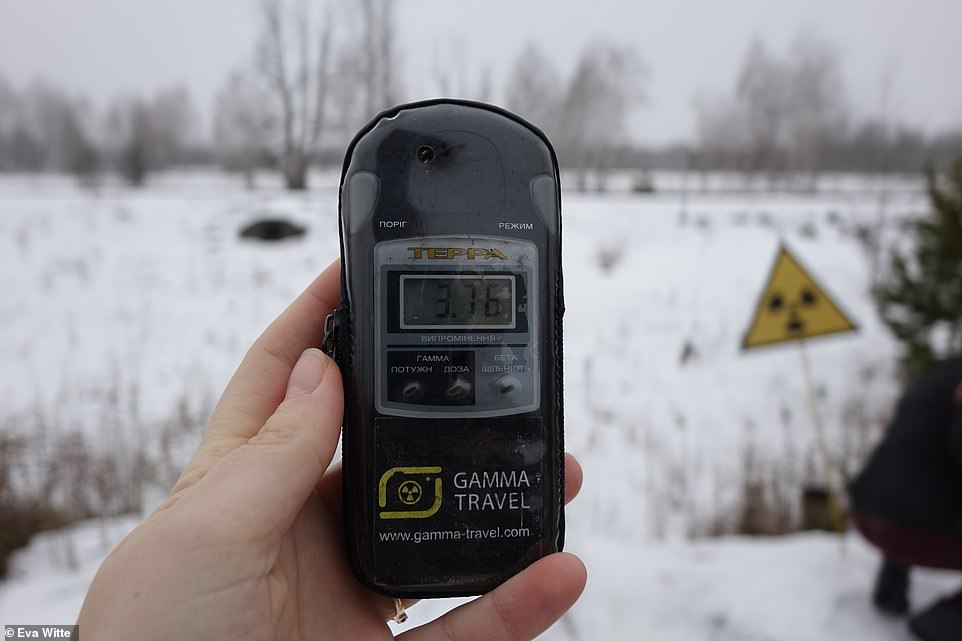 The group hired Geiger counters to make sure they were safe from heavy radiation, which ‘makes your skin itch’ 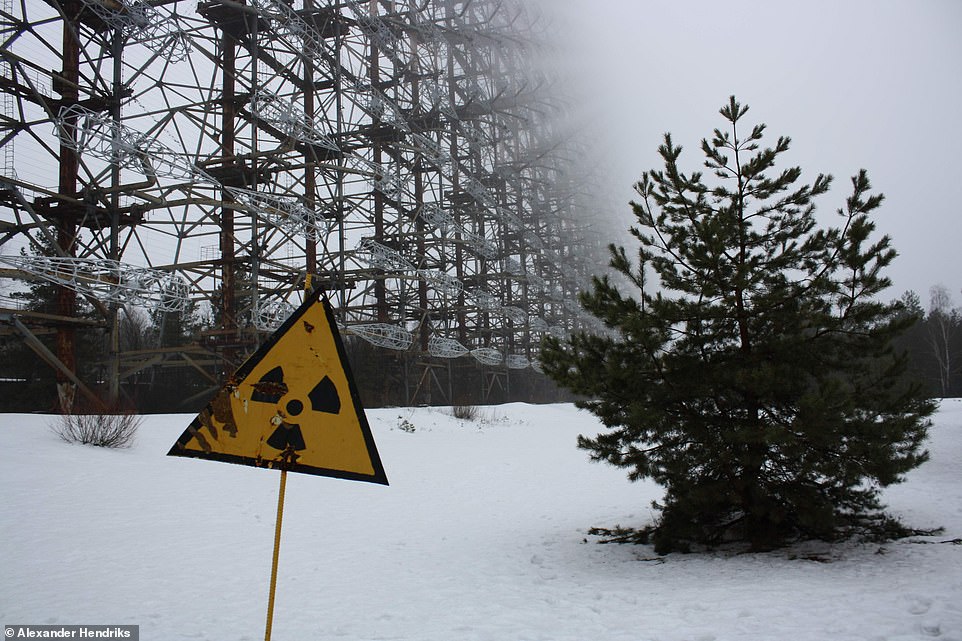 At the base of the Duga Radar Array, sometimes called the Russian Woodpecker, for the interference it would cause for radio listeners

Recounting the experience, Alex said: ‘When you wander off alone in these places, you bathe in the silence. It isn’t eerie but it’s not quite human.’

He concluded: ‘You can go to Vienna and see a beautiful church, but there’ll always be another.

‘There is only one Chernobyl and it really is a unique experience.’ 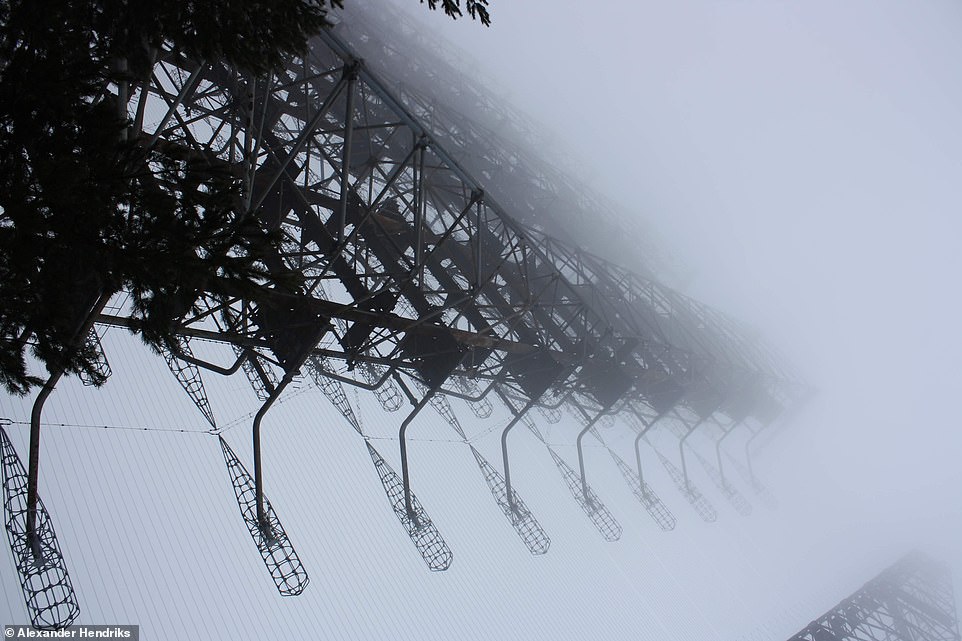 The Russian Woodpecker stretches up into the mist, the steel structure a reminder of Soviet-era engineering capabilities 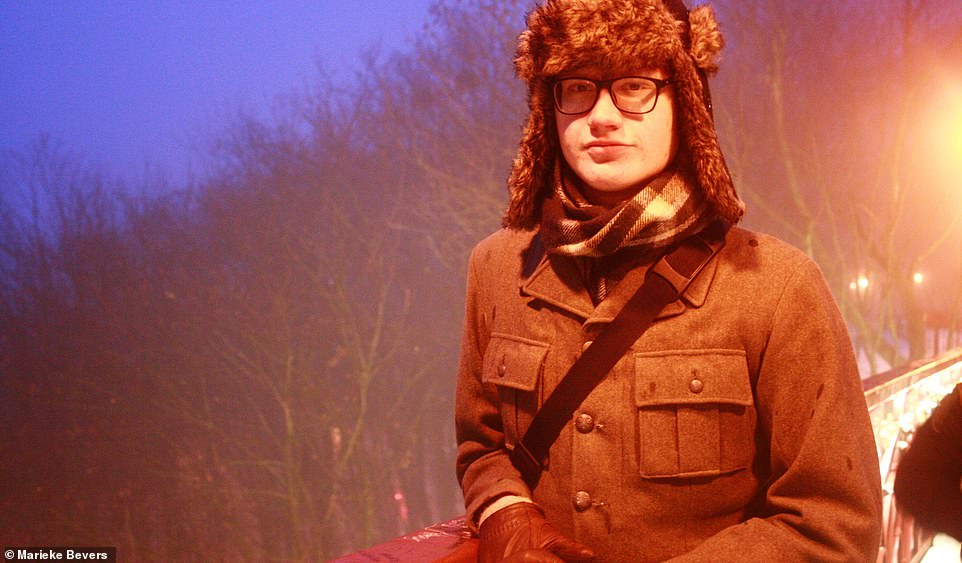 Alex Hendriks is a 22-year-old journalism student from Leiden, a city in the Netherlands 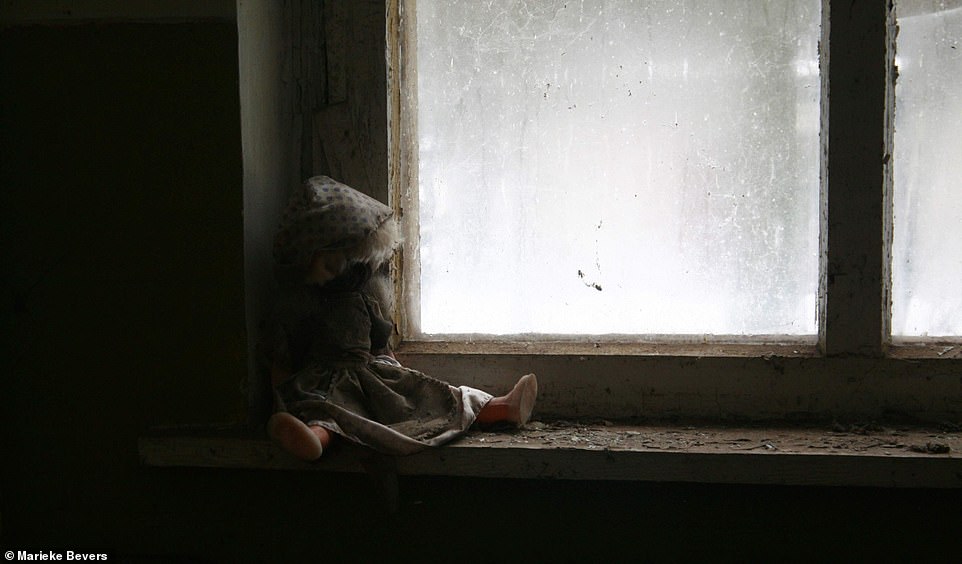 Children’s toys are found scattered across the Exclusion Zone, seemingly waiting for owners who will never return 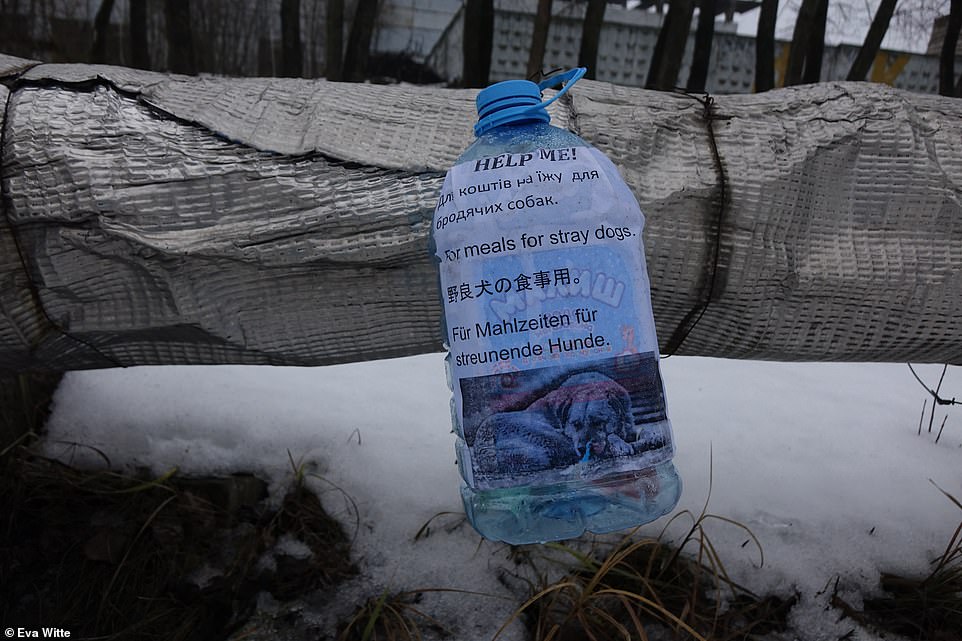 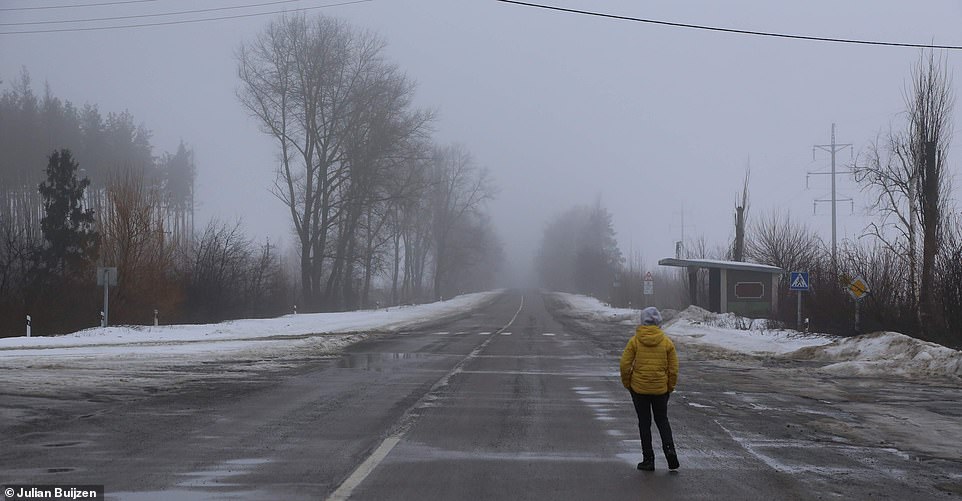 Flights: The most popular seat on a plane revealed and why passengers desire it

How to Escape the Crowds at Horseshoe Bend

The Hong Kong Tourism Board and Cathay Pacific land in Perth ·

COVID-19 in July: Which US States Are Still Restricting Travel?