Just before he turned 18 Christopher Swann joined the Royal Navy as a diver – ‘frogmen, brass helmets and lead boots, shipwrecks and the sea, this was the sort of adventure I had been longing for’, he said.

The first time the Briton went diving was on a ‘bitterly cold winter’s day at the Royal Navy diving school at HMS Vernon in Portsmouth’. He said: ‘It was as tough and as uncomfortable as they could make it. Of the 32 who started, only six made it. But by the time it was over, I had fallen in love with the sea.’

Fast forward decades later to the present day and Mr Swann can look back at an amazing career and life, as a Royal Navy diver, oil rig diver, whale-watching excursion operator offering ‘unparalleled experiences’ and, in the past 15 years, an accomplished marine photographer. He’s twice been an awarded finalist in the prestigious Wildlife Photographer of the Year competition. 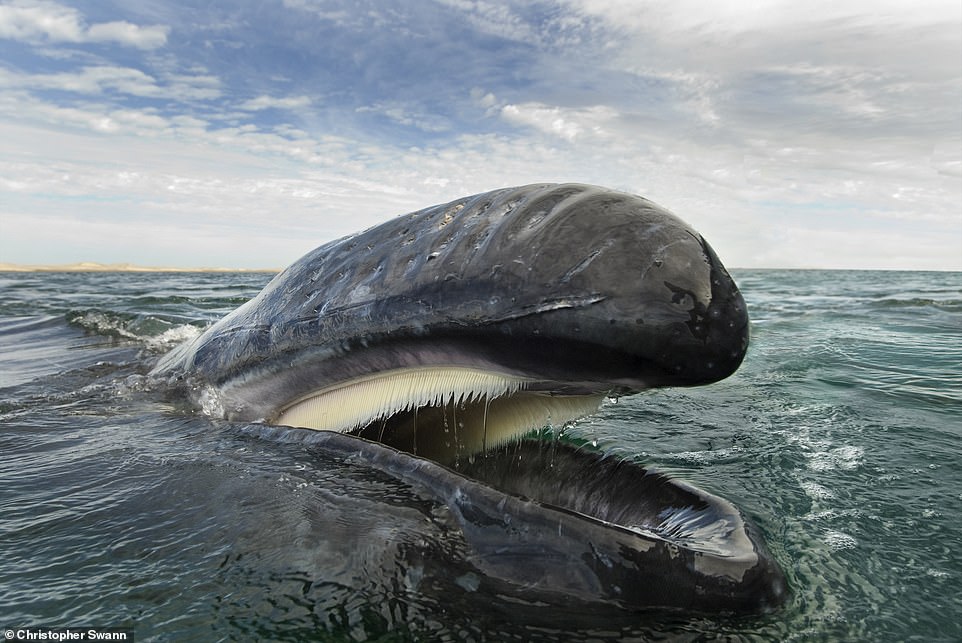 Christopher Swann has twice been an awarded finalist in the prestigious Wildlife Photographer of the Year competition. This picture he took is of a gray whale in the Gulf of California feeding at the surface and showing its ‘baleen’, brushes in its mouth that filter food 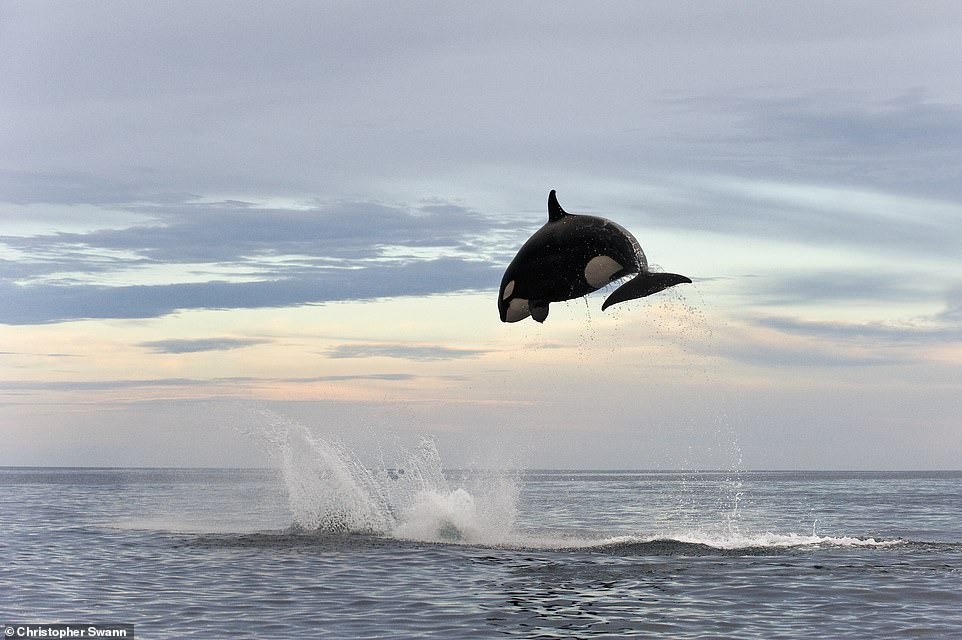 His pictures are remarkable – and so is his whale knowledge.

In fact, he’s known as ‘The Whale Whisperer’.

As the late radio presenter and producer Tessa McGregor said: ‘Christopher Swann is one of the most remarkable people I have had the chance to meet. He is a brilliant photographer and an outstanding cetacean expert. His knowledge of whales, marine mammals and their behaviour is unrivalled. Once at sea with Swanny, you soon realise why people call him The Whale Whisperer. ‘

And Sean Whyte – Co-Founder of The Whale and Dolphin Conservation Society – said that his whale and dolphin trips offer ‘unparalleled experiences’ and that he could think of ‘no-one better qualified’ to see them with.

But even having a profound knowledge of marine life doesn’t guarantee brilliant pictures. 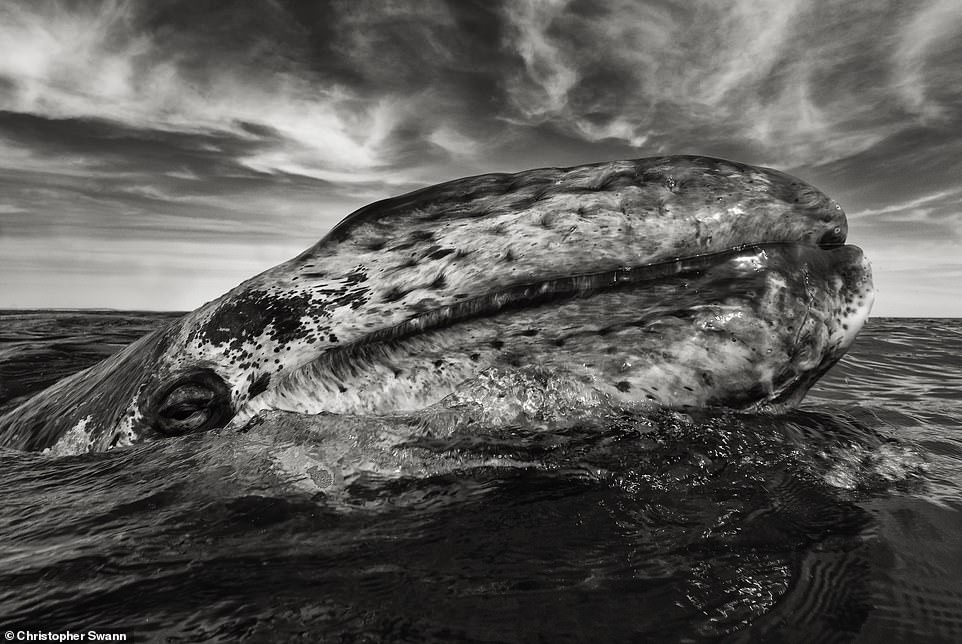 A gray whale rises to the surface for a look around. Mr Swann said: ‘Every cetacean is different, some will not let you close, others go at high speed, some are in murky water, others might stay down for hours’ 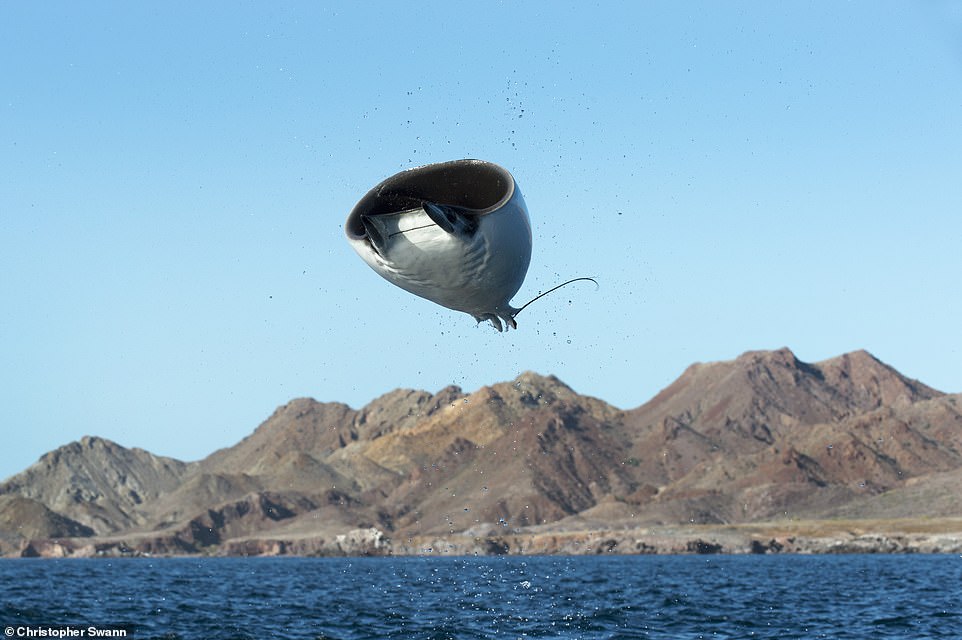 A mobula ray mid-flight in the Gulf of California. Mr Swann said of his photography expeditions that he often goes out hoping to get one thing and comes back with quite another

Mr Swann told MailOnline Travel: ‘I find that I often go out hoping to get one thing and come back with quite another. The first thing is to find the animals – then they have to be in the mood and you want the weather to cooperate. Every cetacean is different, some will not let you close, others go at high speed, some are in murky water, others might stay down for hours. It’s a long slow business.’

When asked to reveal the common mistakes amateurs make with photographing marine life, Mr Swann – who lives half the year in La Paz, Mexico, on the shores of the Sea of Cortez, and the other half on the west coast of Scotland – was characteristically humble.

He said: ‘I suspect I have made most of them. I think perhaps rushing towards animals. I always tell people about to swim with a whale, just tell it you aren’t really there, sort of sidle towards them as if you are disinterested.’ 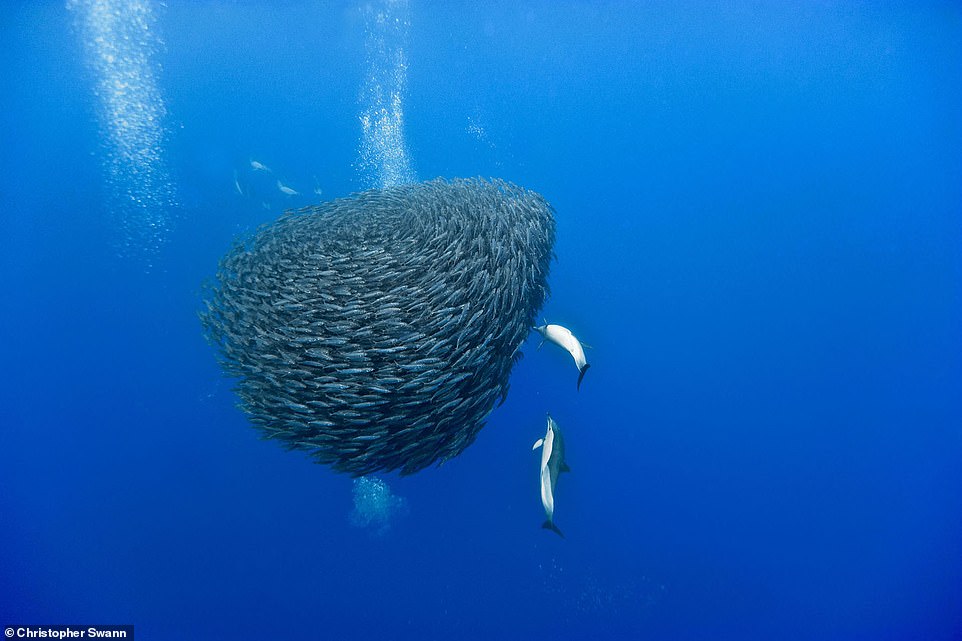 Common dolphins attack a ball of blue jack mackerel, mid-ocean in the Azores, an area that Mr Swann says is his favourite for ‘clear water’ 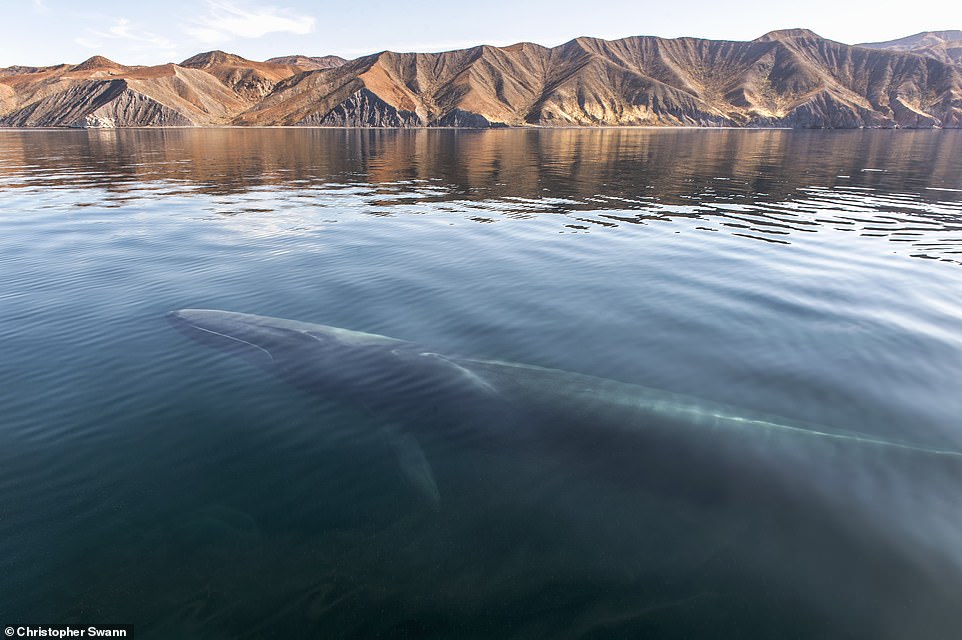 A fin whale glides to the surface in the Gulf of California. Mr Swann says that he loves whales for ‘their beauty and elegance’ 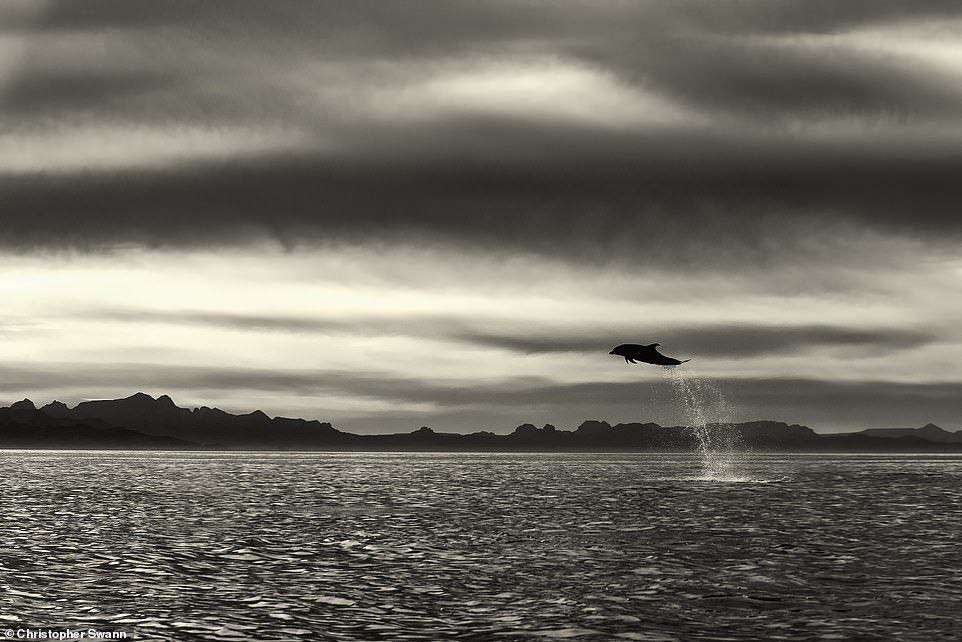 Water guy: Mr Swann is known in marine circles as ‘The Whale Whisperer’

His list of go-to places for photographing whales and dolphins ‘is endless’, but ‘if money was no object’, they include ‘Tonga, the Azores, the Canary Islands, the Caribbean and the Sea of Cortez’.

He added: ‘My favourites are the Azores for clear water and the Sea of Cortez for sheer abundance.’

It was in the latter that he had a heart-stopping encounter with a shark in murky water.

He revealed: ‘I once got harried by a shark in very murky water in the north of the Sea of Cortez. Visibility was less than three foot even at the surface and I decided it was pointless to continue. Just then a six-foot shark appeared and swam right at me. 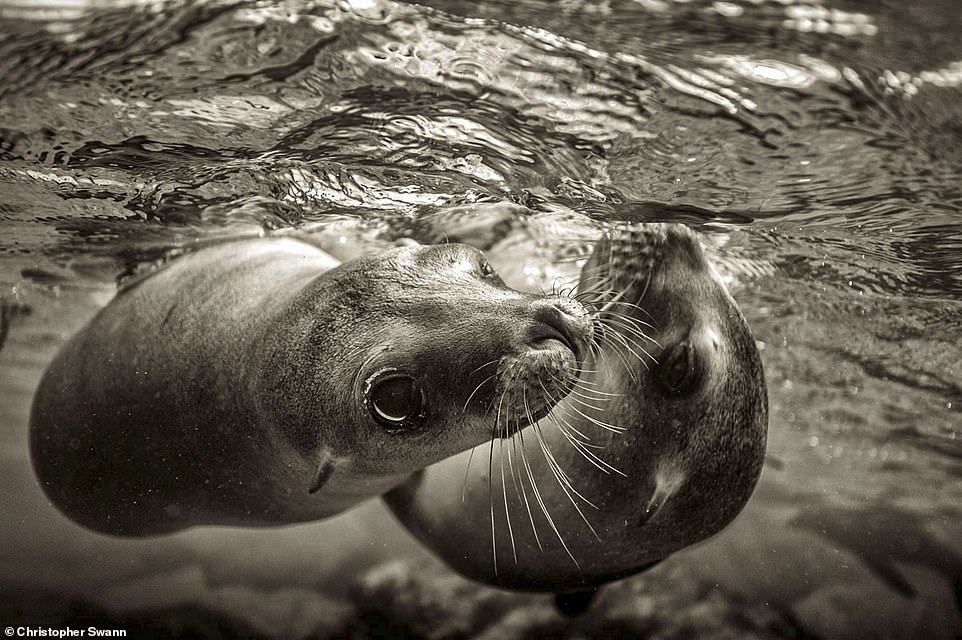 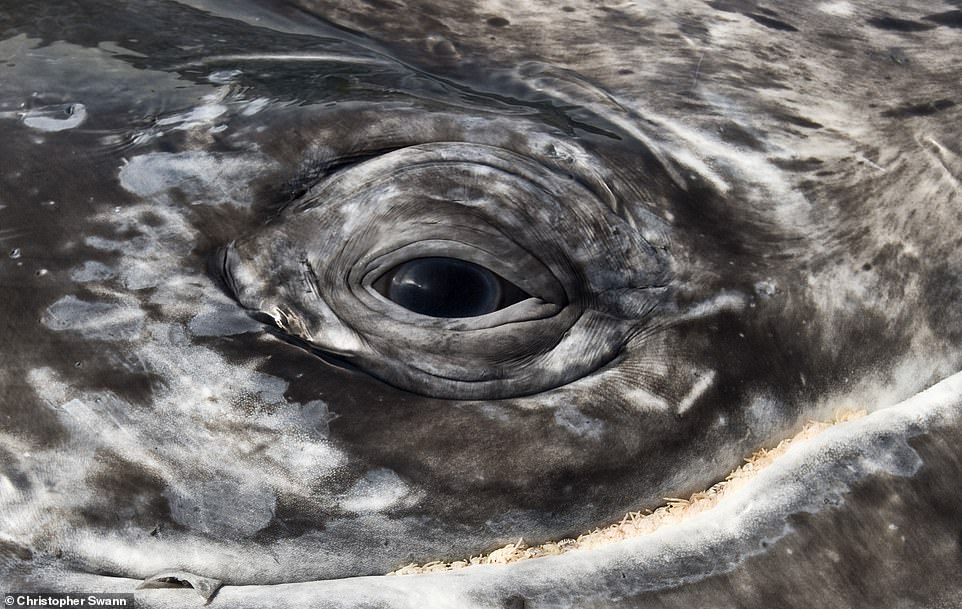 The eye of a gray whale, pictured on Mexico’s Pacific coast. Mr Swann’s whale-watching trips are said to be incredible 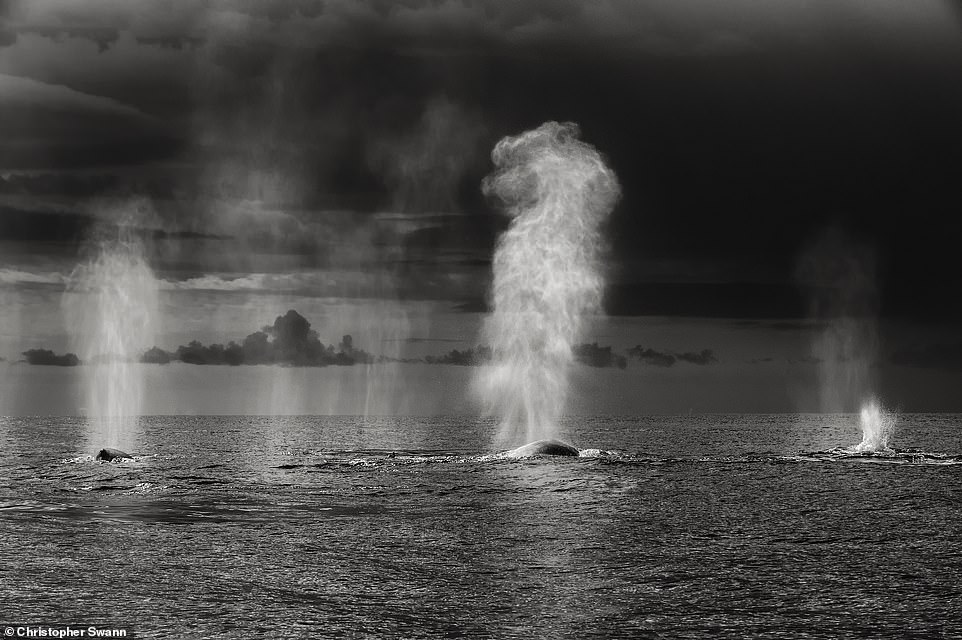 Humpback whales in the Mexican Pacific spouting – a process that involves them blowing all the air out of their lungs. The water vapour in the air then condenses above the whale in a spectacular fountain fashion 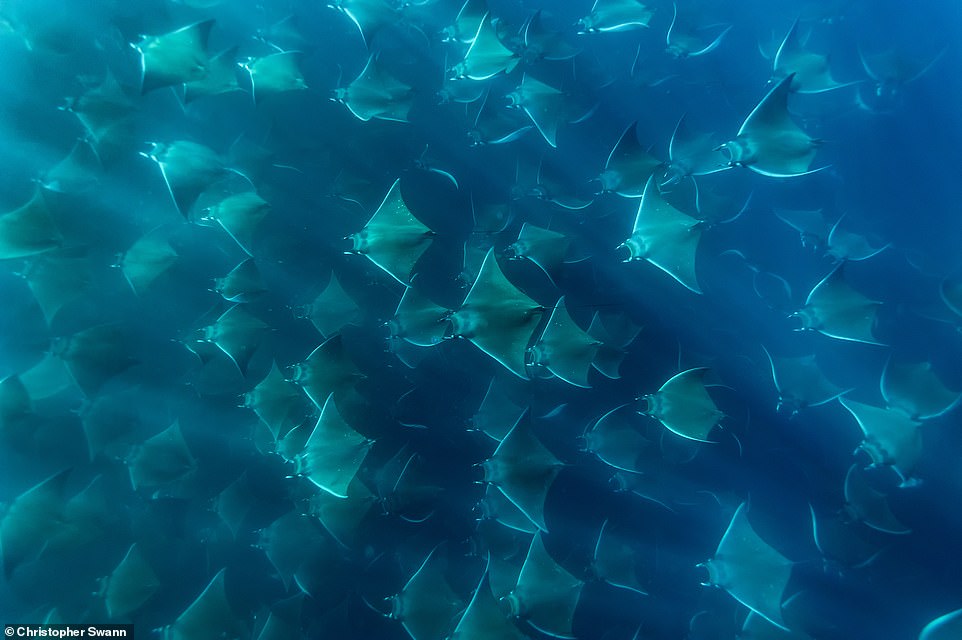 A rather large school of effervescent mobula rays, which are expert acrobats

‘I bumped it on the snout with the camera housing and it shot off, only to reappear seconds later. I bumped it again and waved to my girlfriend on the boat to come and get me – she was not good with the boat. She didn’t react at first and when she finally did, she came at full speed at went right over the top of me and ended up further away than when she started. Then the shark hit me. I swam as fast as I could – very tricky with heavy housing – and was relieved to get out.’

Mr Swann said he loves whales and dolphins for ‘their beauty and elegance’ and that budding amateurs keen on photographing them should be ‘determined and passionate’… and not fussed about making money.

An incredible encounter with sperm whales off the coast of Dominica

Four miles offshore to the west of Dominica the water is two thousand feet deep. When the Trade Winds ease a little the height of the island shelters the sea here and stillness pervades. The Caribbean lies silent and silky. The island is shrouded in thin clouds of rain, a silver filigree dripping life onto the fecund land. Here as we rise and fall on the soft breath of the ocean, we can see Martinique far to the south and to the north, Guadeloupe. These are mountain tops of volcanoes, still occasionally troublesome. Beneath the surface they are of course joined.

Invisible to us, the subsea world has its own highways and boulevards, along which myriad animals travel, feed, prey, mate, socialise and communicate, among them one of the world’s most notorious creatures -Moby Dick, the sperm whale, or cachalot. Here they can be found in large numbers and sometimes, like today, in relaxed good humour.

It was just after breakfast as we neared the northern end of the island that we saw the first blow. It was typical, a small forward-slanting mist of white, low and easy to miss if there is lots of white water. But today in this luscious calm we can see for miles, the surface is oily and undulant, like gently flexing silk stretched taut. It ripples and pools. The sun beats down, flattening it with its heat. 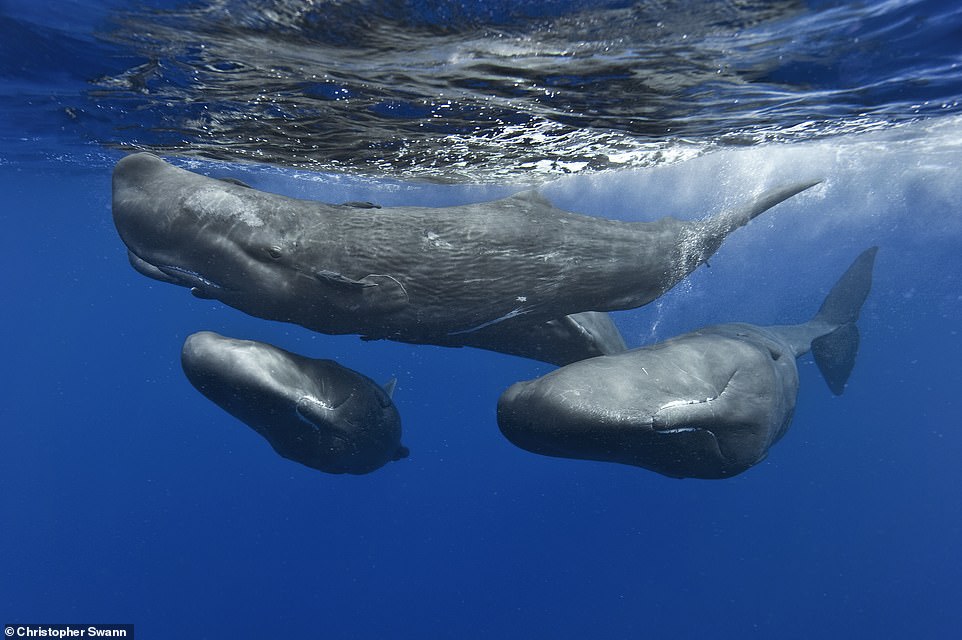 Drawing nearer to the whale we begin, as is so often the case, to see other blows. It is clear there are many whales around. These are mothers and calves, females and juveniles, in pairs, in small groups and the odd wandering youngster seemingly alone. Blows explode in cotton wool silence wherever we look. Backlit by the sun they are bright and golden.

Close to the first animals, it is clear they are quite relaxed, not the sometimes common twitchy sperm whale behaviour. Then they are awkward cussed beasts, difficult to approach and soon gone once you cross the boundary they have set, perhaps around 80 yards. But now it is the opposite.

We cruise quietly to a halt, easing our speed and then finally turning off one engine. The noise is at a minimum, the whales not more than 30 yards away and showing no sign of nervousness. Slipping into gear, we inch ahead. The whales are cruising slowly, their dark wrinkled backs and asymmetrical blowholes make them seem prehistoric, deformed, bizarre.

Now we are travelling with them, side by side at maybe a knot or less, and they are perfectly happy for us to be there. They are mere feet away and it is magnificent. Occasionally two or three passes right under the boat and they are bumping and knocking against us but without the slightest concern or apparent notice. They are clustered under the boat, at the bow, to each side.

Everywhere we look are blows, occasionally a tail appears, standing above the horizon like the flower of a fossil plant.

These are truly weird animals. Their heads account for over half their body length and the rest is all tail. They have tiny, mean but not unintelligent eyes and paddle-like flippers. As they shed their skin regularly they appear patchy, even shabby. On their bodies, remora [suckerfish] wriggle and slither with incredible agility and speed, gathering what food drifts by on this fairground ride to the deeps, for this is a creature designed to dive to ridiculous depths, where, in the pitch black of the abyssal deep, they hunt among other things, giant squid, architeuthis.

It is astonishing to contemplate that evolution has led to this battle of the deeps, one for which both contestants are well adapted. Maybe five or six thousand feet below the sea’s surface this struggle is enacted and there is no audience.

But for now, they are intent on travelling slowly south and are almost continually at the surface. We are in the middle of them. Sometimes they stop. Nothing is happening, they just pause. Now is our chance and we slip on masks and snorkels and slide into the water. It is fabulous. A deep inkwell of brilliant indigo, thick with dancing rays of sunlight. It is indescribably blue and the moted shafts of light dance and flicker with mirth. Way down deep they fade and disappear.

Swimming gently towards an approaching group I stop and lift my head out of the water to see what they are doing, where exactly they are. They are doing the very same thing just 20 yards away – looking at me. Lowering my face back into the sea I can make them out in the distance, coming directly towards me like a row of grey-black submarines.

From above, they look strange. In the water, they look incomprehensible.

But they are coming directly at me. I see one or two open their jaws and the rows of teeth are clear. I stay floating and still and as they near they swerve slightly and pass maybe 15 feet away. Large, small, a tiny calf that must be very new, all pass like a soft forest of whales. The sea is blotted out as they swarm by. I swim alongside them. The water is warm and clear, everything is sublime and I am lost in an amniotic world.

Warning: How diseases can spread like wildfire as 6,000 quarantined over coronavirus fears