From Romania with love: Adventuring into the heart of this Eastern European gem – where life has changed little over the centuries

I felt I had walked into a James Bond movie. I was standing in a vast cavern surrounded by the inky waters of a subterranean lake.

Craning my neck I looked up to see a sparkling waterfall of crystallised salt clinging to the sheer black walls hundreds of feet above me whilst fringes of delicate stalactites were suspended like icicles from the roof.

The Turda Salt Mine in Romania is so big that it houses an auditorium, a playground and even a Ferris wheel. Dating back to the 17th century, it resembles an underground city with huge mine shafts and tunnels over half a mile long that are carved out of the rock. 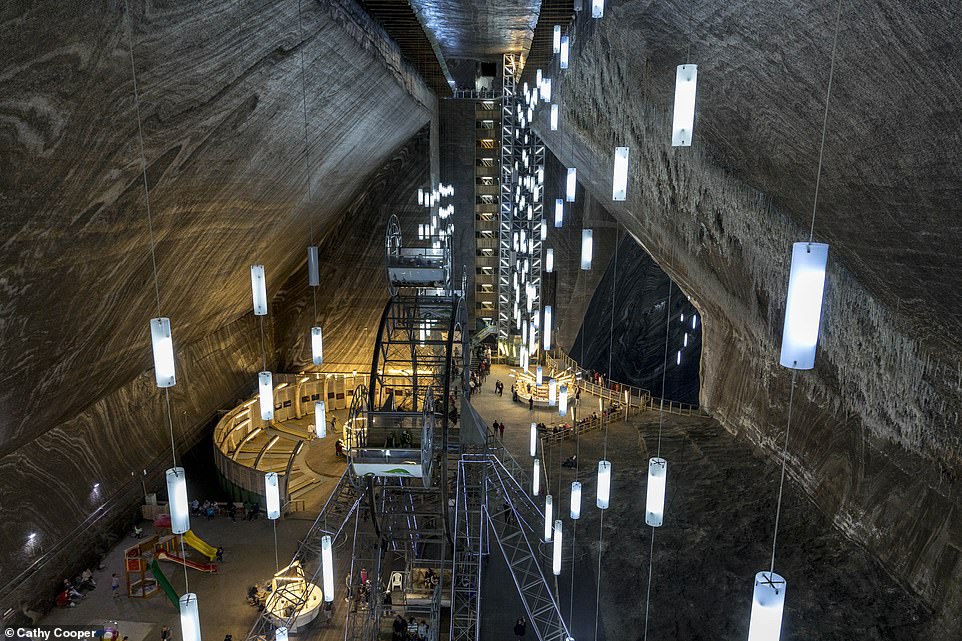 Turda Salt Mine in Romania dates back to the 17th century. It houses an auditorium, a playground and even a Ferris wheel

It lies just a few miles from Cluj Napoca, the capital of Transylvania, where I had met my guide, Mihai, to visit the north of the country.

Romania must be one of the best value destinations in Europe. A room in a four star hotel costs just £25 per night and a quick snack of beer and chips little more than a pound.

We were heading for the Maramures, a beautiful unspoilt region of forests and rolling hills. It was early September and the countryside was littered with pear-shaped haystacks. 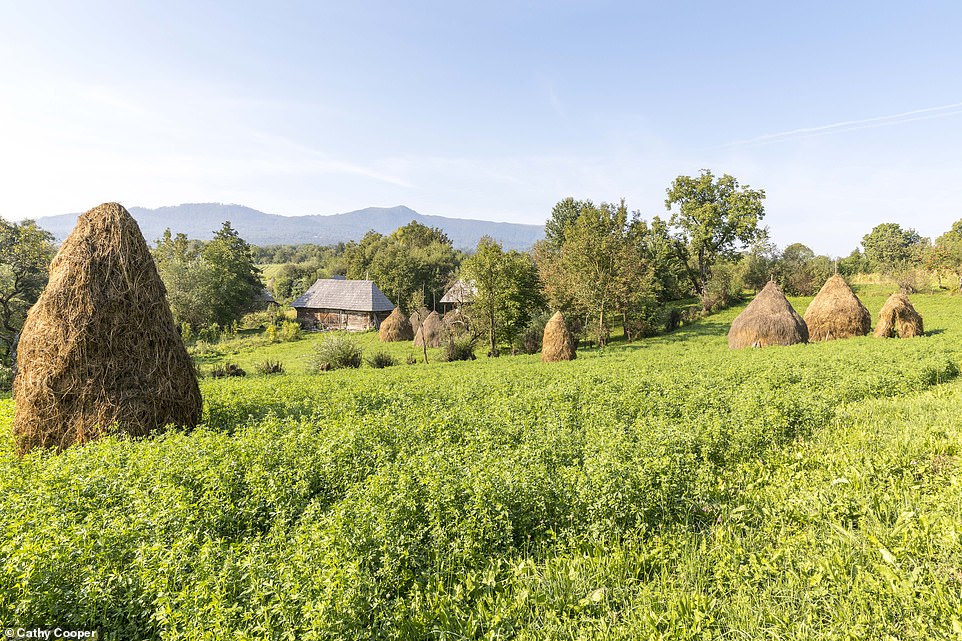 Wendy loved the Maramures, a beautiful region of forests and rolling hills littered with pear-shaped haystacks 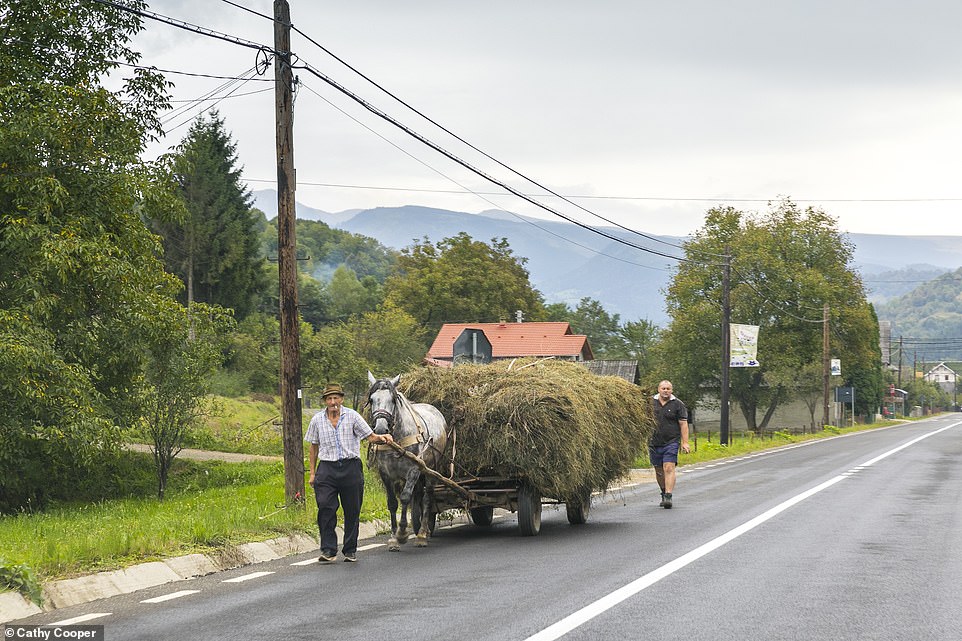 Life in the Maramures has changed little over the centuries, with horses and carts still ambling along the roads

In the little village of Breb farmers were scything the grass by hand and laying it out to dry on hay ricks.

Life here has changed little over the centuries. Horses and carts ambled along the lanes and a basket-maker sat stripping poplar branches in his garden.

A sprightly 84-year-old, Florrie, was weaving a homespun jacket on her loom before clambering down to the river with her washing, beating it with a wooden paddle against the rocks. 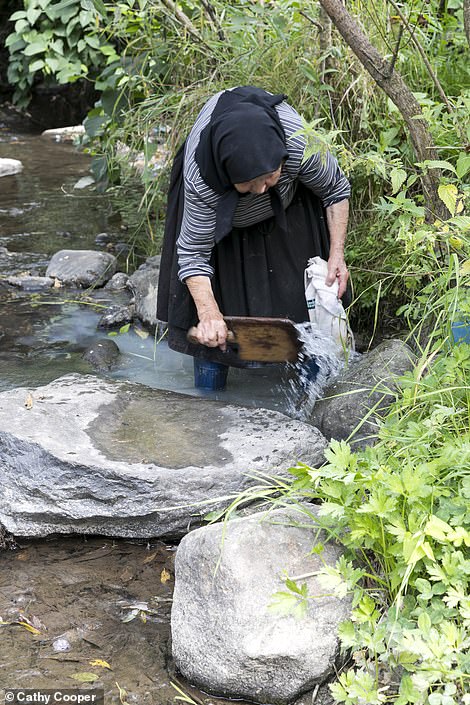 Back to basics: Florrie, 84, pictured washing her clothes in the river

We stayed at the Village House, run by an English lady, Penny, who has converted four traditional wooden cottages into guest accommodation. Mine was right beside a rustling brook and was furnished with hand-woven rugs, embroidered scarves and stencilled cupboards.

One day Mihai heard of a wedding taking place nearby. The whole community was celebrating with everyone in traditional dress. Young girls wore lace blouses and floral skirts with ribbons in their hair. The men were dressed in their Sunday best with embroidered smocks and wide beaded belts over their trousers.

I was treated like a welcome guest and joined the procession as it wound its way to the church accompanied by folk music and drumming, all the men swigging bottles of moonshine as they sang.

Everyone seems to brew their own alcohol. I guzzled home-made plum brandy with the shepherds in their ramshackle hovels up in the high pastures while tucking into creamy ewe’s cheese made just hours earlier. As the sun went down I watched the sheepdogs rounding up the flocks into pens for the night to protect them from bears.

Romania has the largest number of bears in Europe and I was on the look out for them as we trundled through the Carpathian Mountains aboard the Mocanita steam train.

It took us through deep gorges near the Ukraine border and they are known to prowl the steep wooded hillsides nearby, but with blasts from the horn every few moments I am sure we scared them off.

In Bucovina Mihai took me round the magnificent painted monasteries which now have Unesco World Heritage status. Surrounded by fortifications they date back to medieval times when artists painted frescoes not only inside the churches but also on every inch of the exterior. 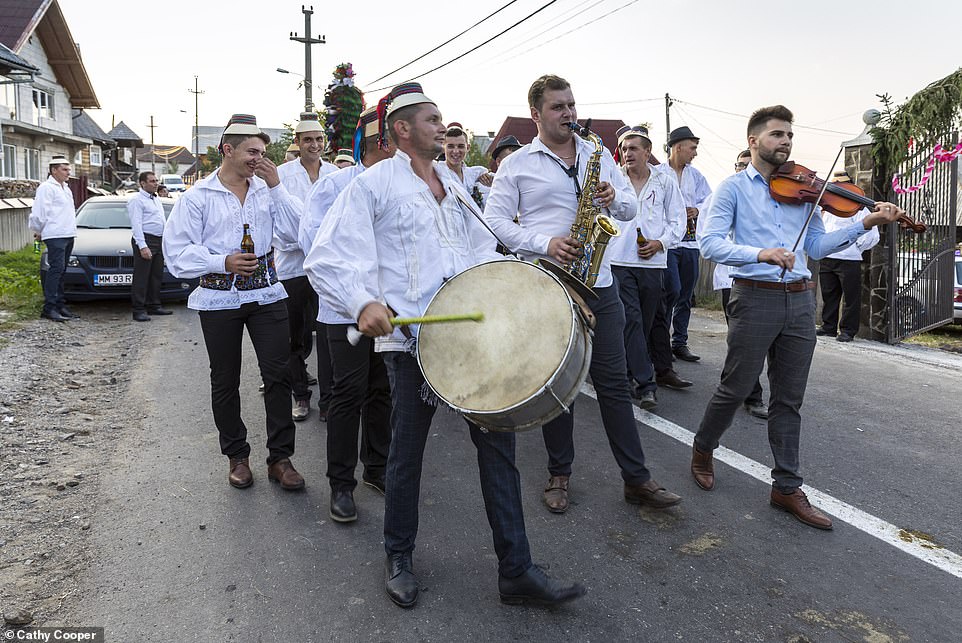 The colours of the outside panels were so vibrant they could have been completed yesterday. Some depicted biblical stories but others showed gruesome scenes of the torture and murder of Romanian martyrs.

My last night was spent in Suceava. The Casa de Oaspeti, lying just outside the city, is now a luxury guesthouse but the ultra-modernist building of glass, wood and concrete was originally the hunting lodge of the former Communist dictator Nicolae Ceausescu.

It had spacious bedrooms and a wide sun terrace overlooking the garden but the most intriguing part was the tiny circular cellar where he entertained such dignitaries as the Shah of Iran and Russian president Leonid Breznev. 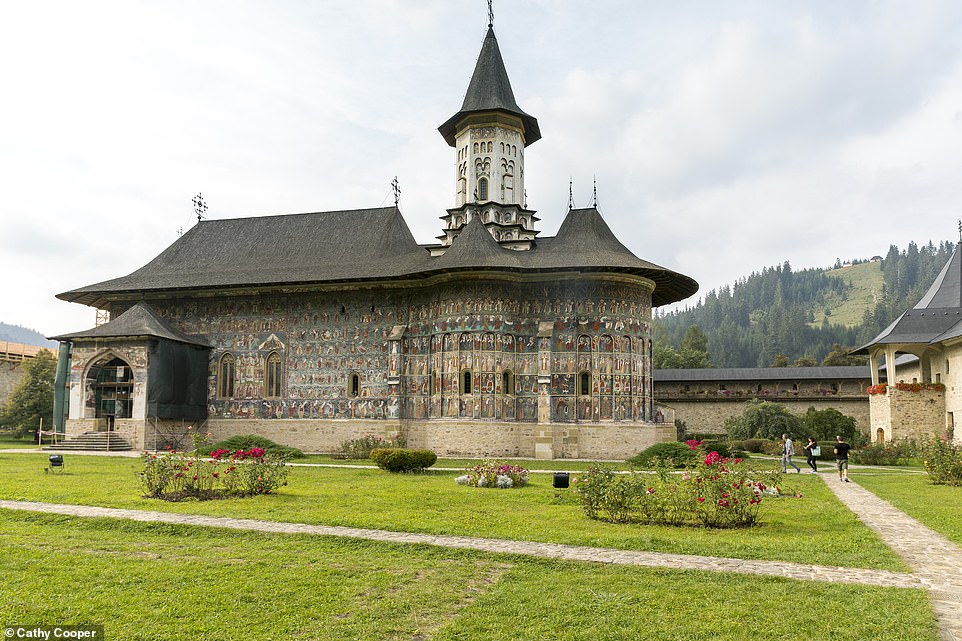 In Bucovina Wendy’s guide took her round the magnificent painted monasteries, which now have Unesco World Heritage status 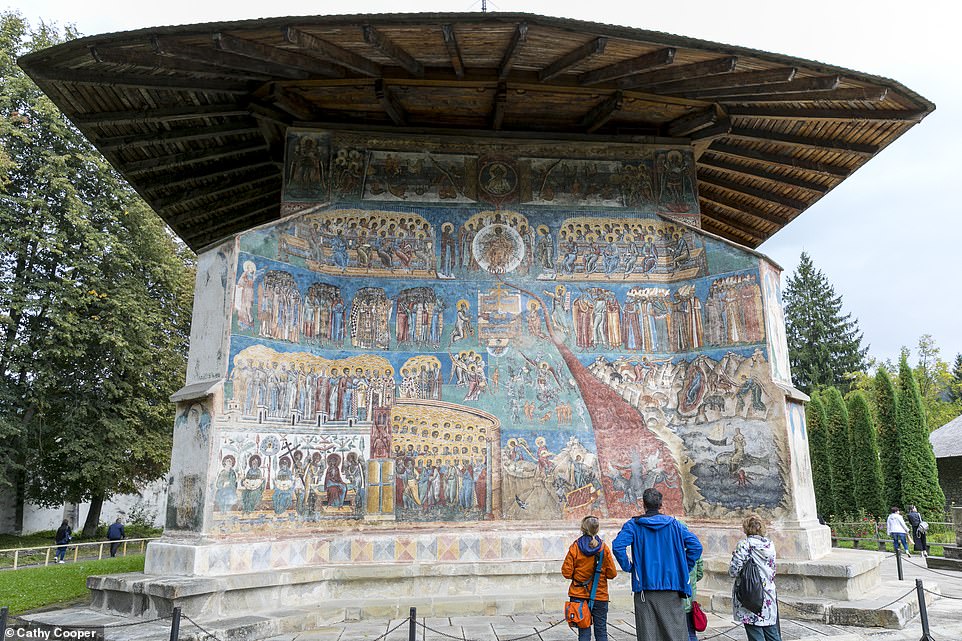 The Voroneț Monastery is a beautiful painted medieval monastery in the village of Voronet. ‘The colours of the outside panels were so vibrant they could have been completed yesterday,’ writes Wendy

The only entrance was through a low tunnel lined with woven willow branches where I brushed past his hunting trophies: a startled, wide-eyed lynx and a ferocious wild boar. Everything – the tables, stools and even the floor – was made of polished tree trunks. Bear pelts decorated the walls and a huge stag horn chandelier hung from the ceiling.

The atmosphere was claustrophobic and chilling and I couldn’t wait to escape into the sunlight.

In fact it could well make a perfect location for Blofeld’s lair in the next Bond film. 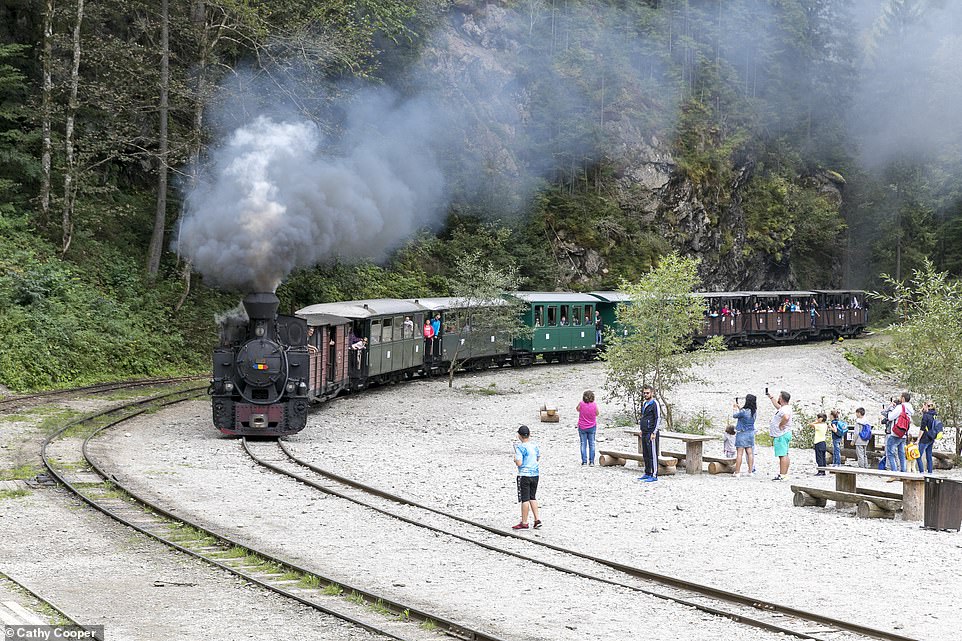 Choo-choo: Trundle through the Carpathian Mountains aboard the Mocanita steam train (pictured) 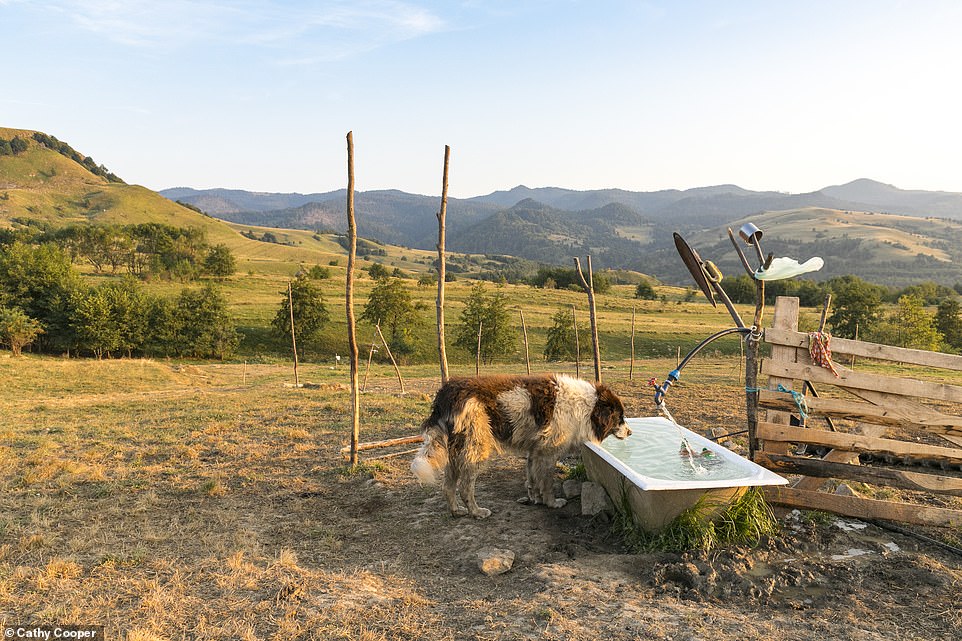 Wendy guzzled home-made plum brandy with shepherds in their ramshackle hovels up in high pastures while tucking into creamy ewe’s cheese made just hours earlier. As the sun went down she watched sheepdogs rounding up the flocks into pens for the night to protect them from bears

Wizz Air (wizzair.com) flies from London Luton to both Cluj-Napoca and Suceava. To contact Mihai visit itravelinromania.com. A six-night tour of the Maramures and Bucovina costs from 1,195 euros per person including transport from Cluj to Suceava, guide, B&B accommodation, some meals and all excursions.

In defence of England's most misunderstood county…

Disneyland Paris Will Not Open for Christmas Season As Previously Planned