Home » Travel » If its Saturday this must be Ulaanbaatar

To be in Outer Mongolia, Jalsa Urubshurow reminded me, is synonymous with being lost. Yet somehow, I found myself there.

Have you met Jalsa? If you have, you’d remember. He was born in Mongolia but raised in Monmouth County, New Jersey, in a small outpost of immigrants who shared some of the same conditions they had left, including a lack of indoor plumbing. But Jalsa made a name for himself as a carpenter and house framer, and he now runs the largest framing company in that state.

That is, when he isn’t running Mongolia’s most prominent tour operation, Nomadic Expeditions, or the country’s most luxurious desert accommodations. Or attending Mongolia’s premier cultural festival, which he also started. Or herding horses on a motorcycle. Or designing a fold-up bed for his guests to camp in the Gobi.

Given all his interests, conversations with Jalsa tend to jump around from past to present, from Asia to the East Coast, from construction to tourism.

He says he built the five-star Three Camel Lodge in the Gobi Desert “not to compete with Mongolians but to help Mongolians compete with all the other destinations that have luxury products.”

Preserving Mongolian culture is partly what fuels his entrepreneurial drive. When he saw a decline in the number of residents who used the traditional practice of training golden eagles to hunt, he financed the creation of the Golden Eagle Festival in the remote town of Olgii. In the process, he revived the tradition, boosted the local economy and increased the golden eagle population in the country. 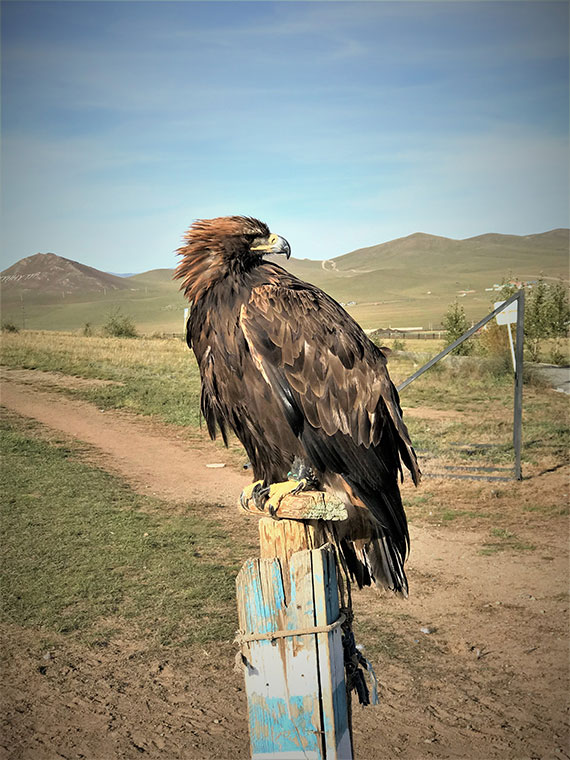 This past September, I had three days between commitments in Marrakech and Beijing and was looking for somewhere to spend time between the two. Mongolia beckoned, and a meeting with Jalsa at Virtuoso Travel Market in August sealed the deal, even though it appeared I would have only 52 hours on the ground there.

Aeroflot, however, had other plans for me; it designated my connection from Marrakech in Lyon, France, “legal” even though it was 100% impossible: I had 70 minutes to land, clear immigration, collect my bags and check in for a flight that, it turned out, required check-in 90 minutes in advance. (Buyer beware: They continued to argue with me that, despite its impossibility, it was nonetheless a legal connection because the computer said so.)

And so my 52 hours on the ground in Mongolia became 28.

But I can’t think of a more rewarding 28-hour travel period. Jalsa had arranged for a guide and driver for me, and we hit the ground running. The guide, Ganzorig (he has just one name), first took me atop a hill to the Zaisan Memorial for a sunrise overview of Ulaanbaatar and a quick history lesson. The monument was built to commemorate friendship between Mongolia and its Cold War patron, the USSR. (The friendship was based largely on shared animosity toward neighboring China, home of Inner Mongolia.) 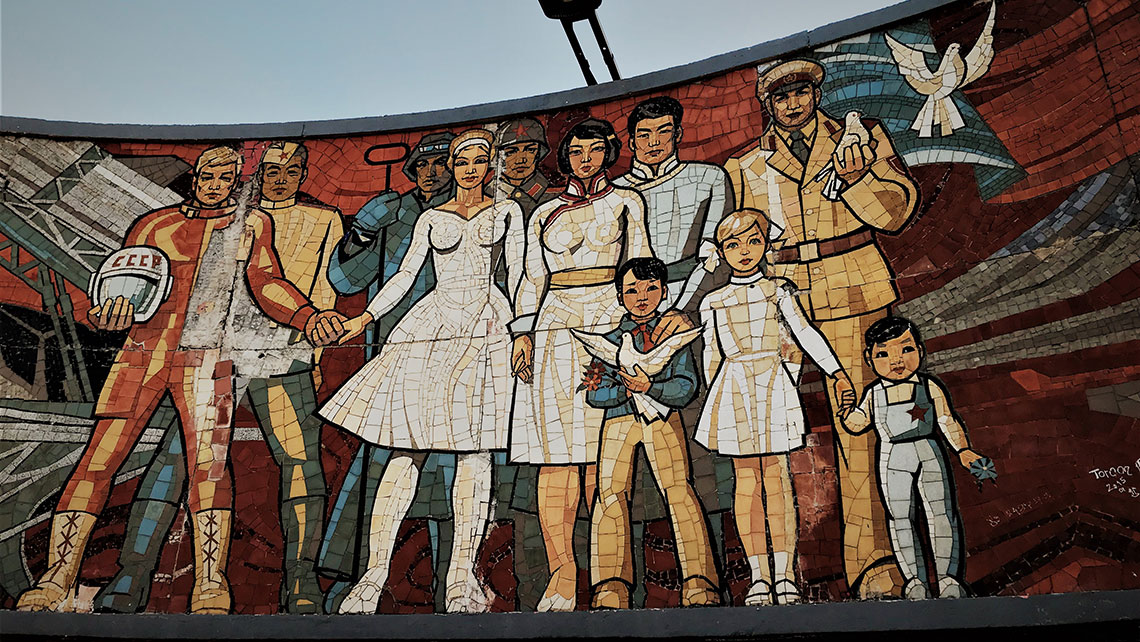 Today the capital is plagued with heavy air pollution, traffic jams and a growing population of nomads living in unzoned “yurt districts,” their traditional lifestyles upended by climate change. 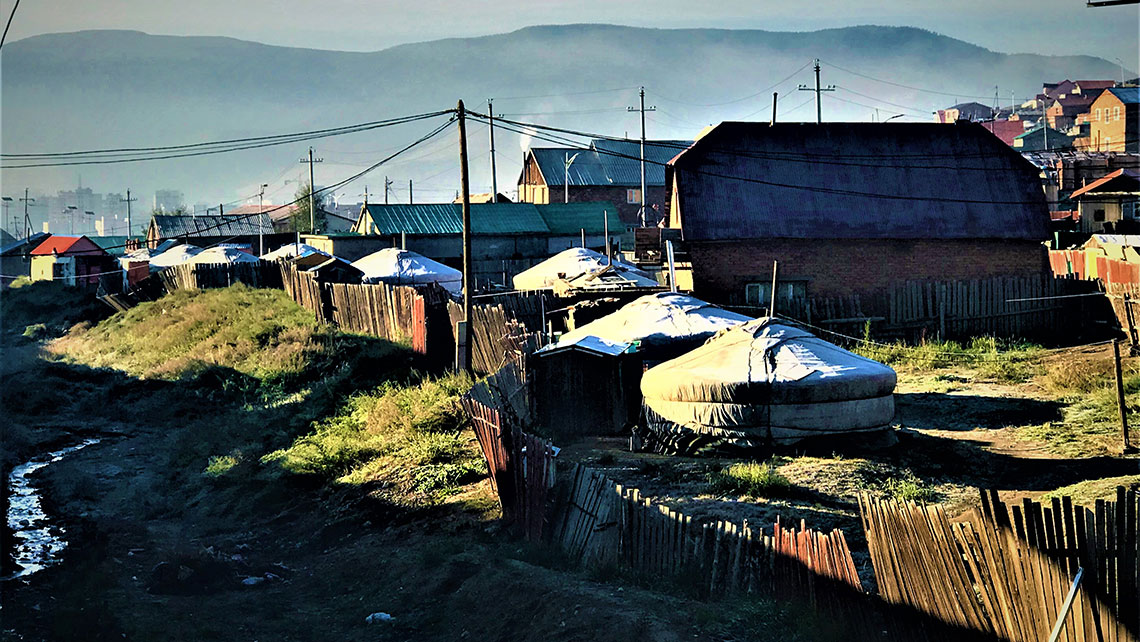 It’s nonetheless not without interest for visitors. The monks at the expansive Gandan Monastery practice a form of Lamaism, similar to Buddhism in Tibet, and massive prayer wheels at its entrance are covered in graffiti asking for favors large (“Let my parents live long”), personal (“Please let me have a handsome, tall boyfriend”) and very Mongolian (“May my father’s horse be fast.”)

A power outage cut short our visit to a history museum, but at my request, we substituted my fallback choice to gain insight into a country’s modern culture: a grocery store. I saw fermented camel milk in the refrigerator, and on a shelf nearby, Teshanka, described by Ganzorig as “Russian spam.” I found myself staring at shelf upon shelf of different packages of salt. “We like our salts,” he told me by way of explanation. 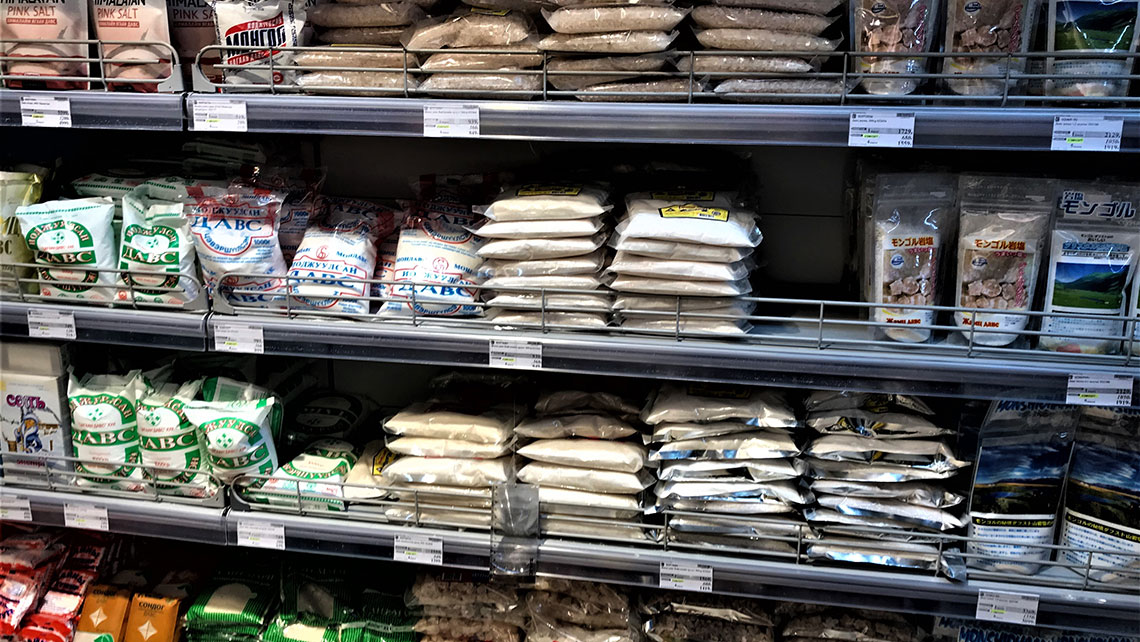 We explored the “black market,” christened in communist times but now the go-to place for everything from wooden saddles to rolls of felt for lining a yurt. 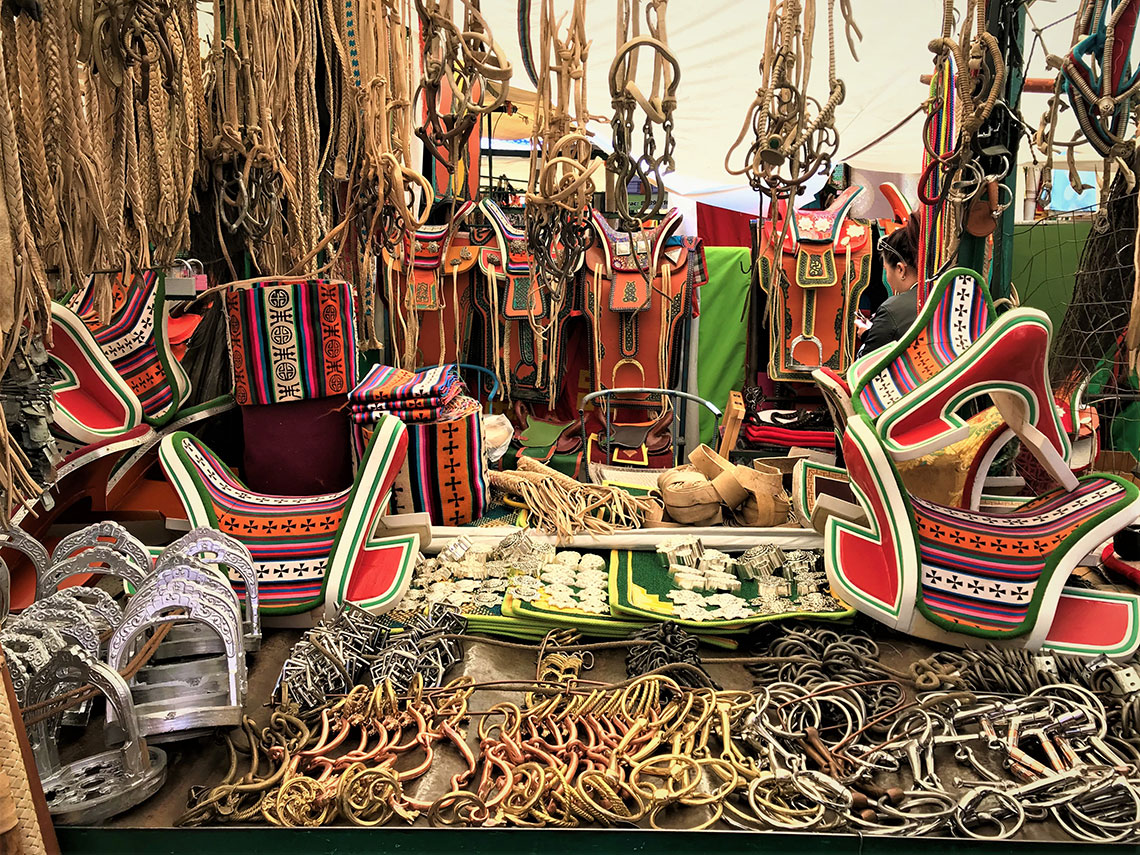 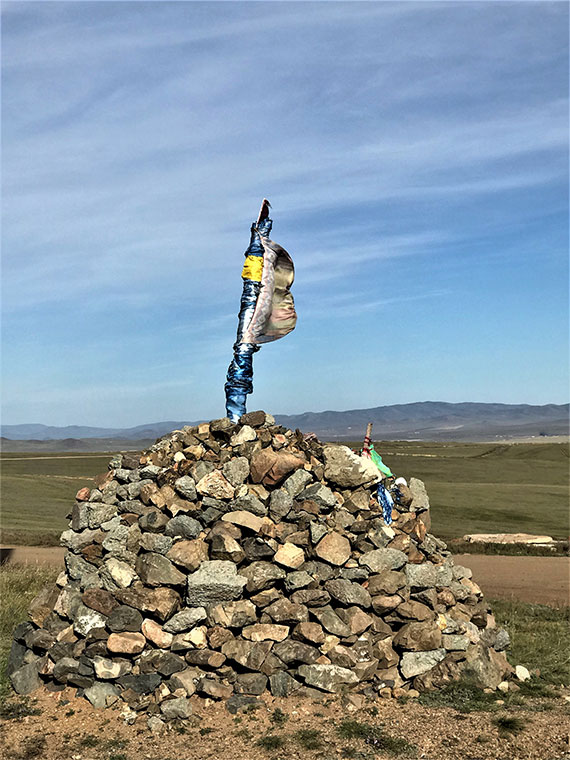 Our eventual goal was Gorkhi Terelj National Park, about two hours outside the capital, where I would spend the night in a yurt. We crossed the khangai, grasslands punctuated by low mountains and broad, flat valleys. We passed horse, sheep and cattle herders, roadside shamanistic shrines called ovoo, crossed over the tracks of the Trans-Siberian Railway and bought in-the-husk pine nuts from vendors gathered near a toll booth. 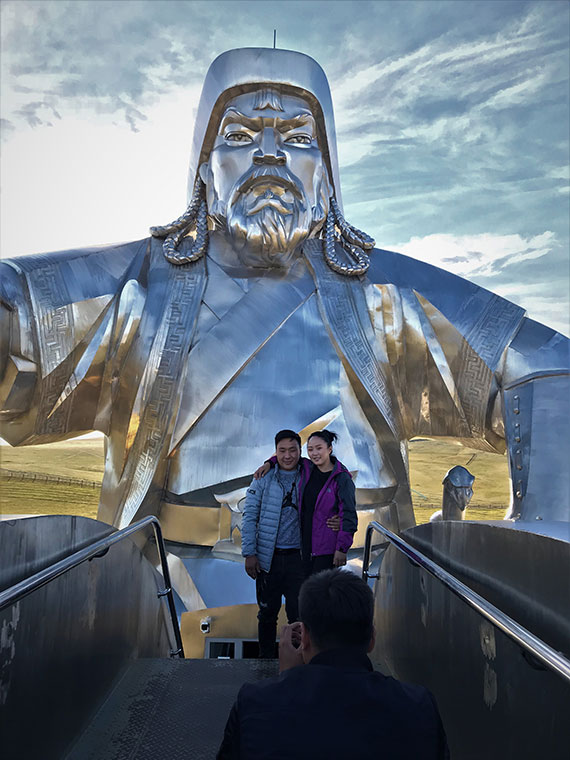 But the biggest attraction, figuratively and literally, was an enormous stainless steel statue of Genghis Kahn on horseback. Visitors take an elevator up the middle of the horse’s torso and out onto his neck to a viewing platform atop the head.

The yurt was a bit of a disappointment; it was on a permanent foundation and furnished with only cots and a small table and chairs. I had hoped for something more authentic, filled with the traditional furniture that had been for sale in the black market. 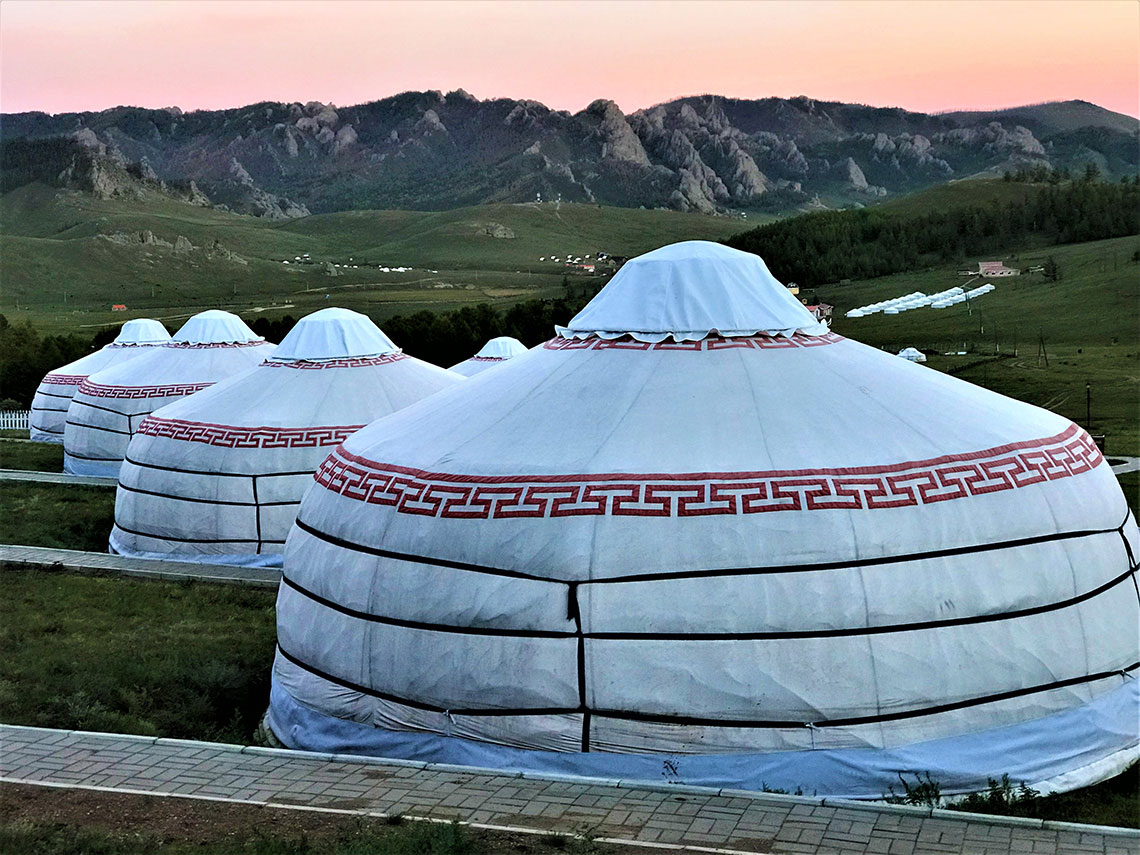 I’m definitely up for a return visit to see the Gobi and, especially, the Golden Eagle Festival.

Fermented camel’s milk, not so much.