Home » Travel » How to spend 48 hours in Malmo, Sweden

As you fly in, you can’t miss it. Rising up in the middle of the Oresund, the stretch of water that separates Sweden from Denmark, is a bridge that seems to sum up everything about Scandinavia.

Starting as a tunnel in Copenhagen, it emerges from the water and turns into a bridge as it heads towards Malmo, a triumph of engineering, practicality and – above all – style.

Malmo is Sweden’s most vibrant city, a blend of cutting-edge architecture, beaches and the country’s most acclaimed food culture. It regularly appears as the backdrop to Nordic noir dramas, especially The Bridge. 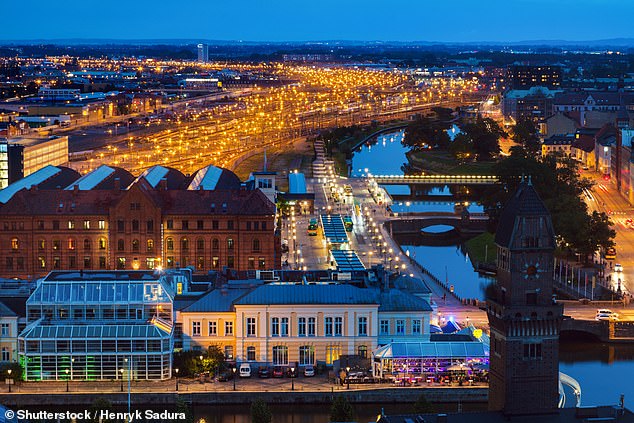 Malmo is Sweden’s most vibrant city, a blend of cutting-edge architecture, beaches and the country’s most acclaimed food culture

Plunge into the Scandi way of life by heading to Kallbadhus (ribersborgskallbadhus.se). By Malmo’s Ribersborg beach, a long wooden walkway heads out to sea. Built in 1898, there’s a busy cafe as you go in and, if you look carefully, there’s an unnaturally healthy glow about the clientele – because they’ve been swimming in the Oresund.

It may sound hellish in winter, but if you do it the Scandinavian way it can be a pleasure. The trick is to first toast yourself in the saunas, which come in a variety of temperatures. Only then do you go outside when, amazingly, it’s a relief to dip into the water. Clothing is optional (to make it especially Swedish). Entrance costs about £7 and the feeling of elation will power you through the rest of the day. Towels are provided.

The province of Skane is Sweden’s most enthusiastically foodie area, with Malmo at its core, and you can immerse yourself in it by visiting the Saluhall food market (malmosaluhall.se/en), in an old warehouse near the train station. Wandering around will take you into the minutiae of the city’s food culture, including craft beers, local cheeses, charcuterie and oysters.

Nip into Malmo Castle. From 1568 to 1573, this building was a prison where James Hepburn, the Earl of Bothwell and husband of Mary, Queen of Scots, was detained. Now it is the city museum and houses a glorious collection of stuffed animals, ancient torture implements and vintage homewares.

Then it’s time for fika – or coffee break. Swedes take coffee seriously and also know that it’s best partnered with a cinnamon bun. Lilla Kafferosteriet cafe (lillakafferosteriet.se) sources its pastries from the cult bakery St Jakobs Stenugnsbageri and is right in the middle of Malmo’s historic centre. 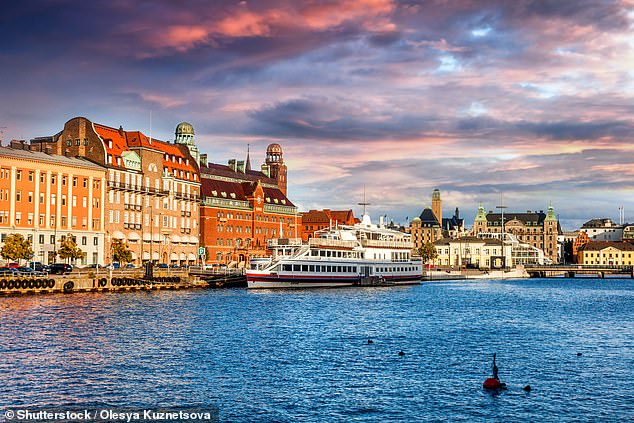 Malmo regularly appears as the backdrop to Nordic noir dramas, especially The Bridge

If you want to buy into Scandinavian style, head to nearby Sodergatan. All of the trendiest brands are here, including stylish sportswear at Peak Performance and any-colour-as-long-as-it’s-neutral at Filippa K. Other labels to look for include Tiger (the smart fashion brand, not the Scandi budget chain). Across the road, you can also stock up on cheap but tasteful homewares at Granit.

Heading along Malmo’s cobbled streets, away from the main square, Bord 13 restaurant (bord13.se) ticks all the boxes. It’s small and friendly, and dishes include kohlrabi pickled in apple cider, Skane ox, and sustainably caught fish, all served with cloudy, preservative-free natural wines.

Scandinavian hotels always have a generous breakfast included in the price. Stay at the Story Hotel (storyhotels.com) and the 14th-floor restaurant has views across the city, including the Turning Torso, Malmo’s striking skyscraper, the tallest in Scandinavia.

The city has a brilliant bicycle scheme (malmobybike.se/en). Sign up and you can hop around like locals. In good weather, everyone heads to the beach or the large park, Pildammsparken. Here, Bloom In The Park cafe (bloominthepark.se) occupies a beautiful spot on the edge of a lake. Menus change daily but the food is always delicious. 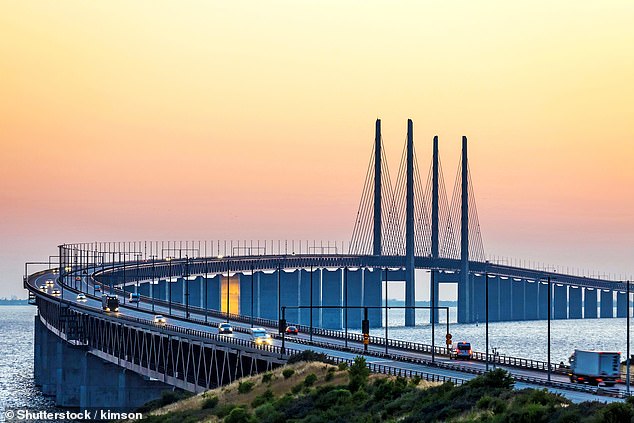 Architectural brilliance: The city is linked to Copenhagen by the Oresund Bridge

Get a heads-up on Scandinavian design by visiting Form (formdesigncenter.com). Go through a courtyard off the historic market square Lilla Torg and you come to a 16th Century grain store, home of Sweden’s oldest design museum. With revolving exhibitions, a shop and a good cafe on the top floor, it’s a delightful place to hone your inner Swede.

Round off the trip by taking one of Eva Roos Davidsson’s In-Sight tours (in-sight.se) devoted to the hit police drama The Bridge.

As well as taking a trip into Copenhagen on the Oresund Bridge, you’ll learn everything you need to know about the series, while seeing parts of Malmo that don’t usually feature in guided tours, including Rosengard, the gritty district where footballer Zlatan Ibrahimovic grew up.

I also learned about Malmo’s best falafel stalls (it’s the city’s signature dish, and each year there are heated debates about which stall is the best) and the thriving allotment culture.

Finally, stop off at hip furniture store Salt & Brygga (saltobrygga.se) in the heart of the Western Harbour. This area is the new Malmo, full of families on bikes, shops, restaurants and a stunning view of the bridge. It’s a good place to sit outside with some moules frites and watch the world go by.

Flights with SAS (flysas.com) start at £66 one-way from Heathrow. Rooms at the Story Hotel cost from £130 night, including breakfast (storyhotels.com). For more, go to visitsweden.com.