Budget flights, cheap sleeps and top Broadway shows like Hamilton for not much more than loose change: How to save $1,000 on a trip to New York

There is nothing like a trip to the Big Apple, but it can easily cost a small fortune.

Yet there are ways to enjoy a fantastic holiday without breaking the bank.

Scroll down for some top money-saving tips, from cheap sleeps to economical eats. 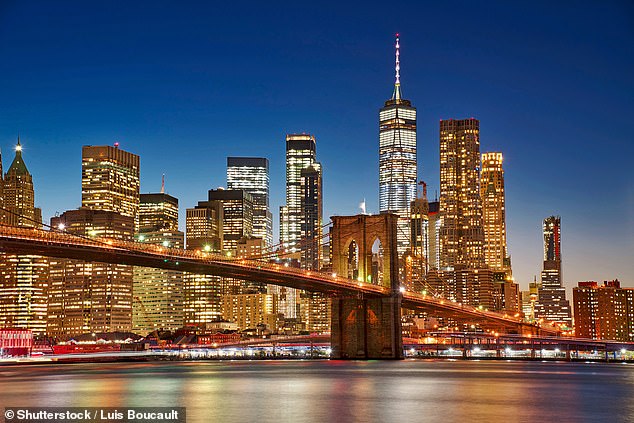 There is nothing like a trip to the Big Apple, but it can easily cost a small fortune

More airlines than ever fly to New York and fares have never been so competitive. For the cheapest prices, book as early as you can and look at the new generation of budget airlines.

Flights with established carriers such as British Airways and Virgin can set you back close to £500 but return trips with WOW (wowair.co.uk) cost from £205 and include a short stopover in Reykjavik, while Norwegian (norwegian.com) has non-stop flights from Gatwick to JFK from £164.

If you’re flying from Manchester, consider Thomas Cook Airlines (thomascookairlines.com) – prices start at £229. From other parts of the UK, check out Aer Lingus (aerlingus.com). Flights cost from £190 and you’ll have to change in Dublin, but depending on your flight time, you may be able to clear US customs and immigration before you fly, saving time on arrival.

Take a taxi from JFK to Manhattan and you’ll pay a minimum of $65 (about £51), including a tip – it’s impossible to avoid paying tips in New York.

Flying into Newark allows you to then catch a train costing $12.50 (about £10) to Penn Station (panynj.gov), but at JFK you are better off getting a shuttle bus.

NYC Airporter (nycairporter.com) has regular services between JFK and Times Square/Grand Central from $19 (about £15) and can take just over an hour if the traffic is good. Alternatively, take the AirTrain to Howard Beach and join the subway from there. The AirTrain costs $7.75 (about £6). 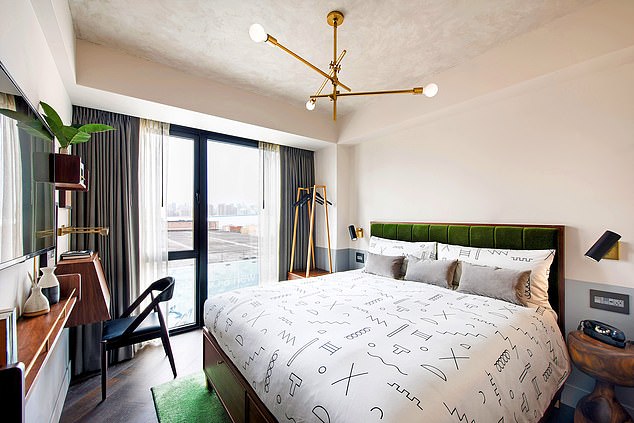 Value for money: A cosy bedroom at The Hoxton in Brooklyn

Be wary of Airbnb in New York as it is likely to be illegal unless the landlord lives in. This doesn’t stop people listing their apartments, nor the authorities kicking out bewildered tourists. A Midtown hotel can easily cost $350 a night (£275), but you can find better-value rooms if you head to Brooklyn. Try the Aloft group (marriott.co.uk/hotels/travel/nycyl-aloft-new-york-brooklyn) or The Hoxton in Williamsburg (thehoxton.com/new-york/williamsburg/hotels) – both have rooms starting at $160 (about £125) a night.

If you’re in a group, some of Manhattan’s trendiest hotels, such as Ace (acehotel.com/newyork) or Freehand (freehandhotels.com/new-york), incorporate low-cost bunk-bed rooms. They may be designed for avocado-munching millennials to hang out in, but they’re also great for families. Expect to pay around $220 a night (about £172) for four people. 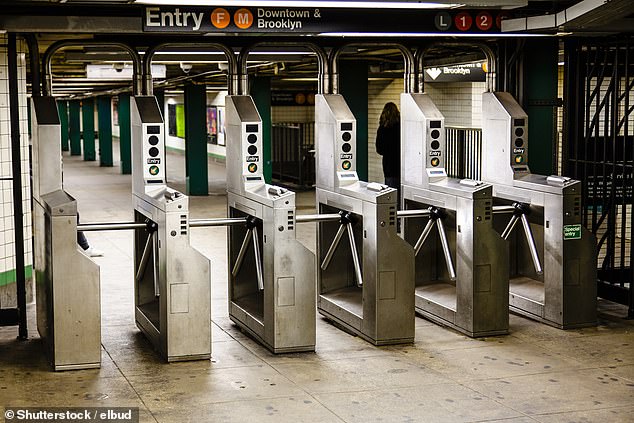 The Museum of Modern Art (moma.org) charges up to $25 (about £19.50) for entry, but on Fridays between 4pm and 8pm you’ll be able to see its paintings by Monet for free. Then head across town from 8pm to 10pm to see artworks by Edward Hopper at the Whitney Museum of American Art – dig into your pockets for a few cents because you have to give some sort of donation (whitney.org).

Six of the best

Entry to some of the city’s biggest attractions isn’t cheap – adult tickets to the top and main deck of the Empire State Building alone cost $58 (about £45). Visitors are better off booking a multi-attraction sightseeing pass in advance. Pre-book the New York City Pass, which includes entrance to six famous sites such as the Empire State, Top Of The Rock, Statue of Liberty and the 9/11 Memorial & Museum, and you’ll save about 40 per cent. The pass costs from £95 per adult and £78 per child (attraction-tickets-direct.co.uk). 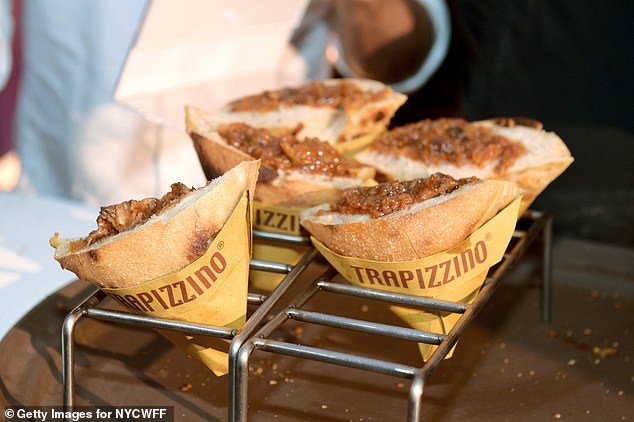 Eating out in New York can be pricey – the average cost of a meal for two with wine is $100 (£77). However, you can feast on some brilliant (and cheap) pizza and Chinese if you know where to look. In the hip Lower East Side, Trapizzino (trapizzinousa.com) has acclaimed stuffed pizza for $7.50 (about £5.80) and rice balls for $3.50 (£2.75). In neighbouring Chinatown, you can gorge at Vanessa’s Dumpling House (vanessas.com) for under $10.

At the Corner Bistro (cornerbistrony.com), between the trendy West Village and Meatpacking District, the burgers (about £10) are famous across New York. A pint of beer – the locally renowned McSorley’s – will cost you $4.25 (about £3.30).

A close encounter – for free 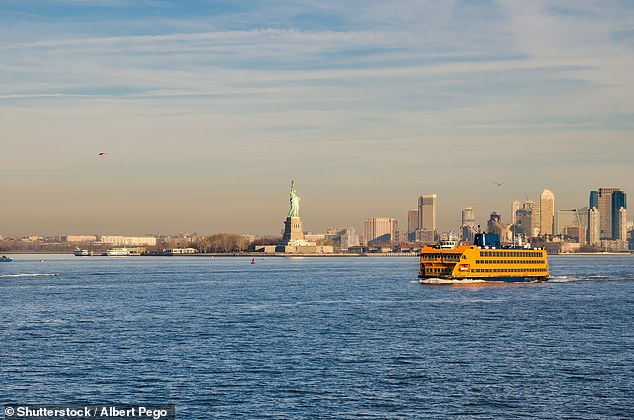 Why pay $15 (about £12) on a New York Harbour tour when you can do it for free? The Staten Island Ferry (siferry.com) gives you a close-up look at the Statue of Liberty and costs nothing. Entrance to Central Park (centralparknyc.org) is also free, and so are some of the events, including performances of Shakespeare each summer.

A donation of a cent will get you into the American Museum of Natural History (amnh.org). And the Brooklyn Brewery (brooklynbrewery.com) offers free tours every Saturday and Sunday between 1pm and 6pm.

Visitors can run up a huge credit-card bill in the designer boutiques of Fifth Avenue, but a true New Yorker never pays full price for fashion. Just off Wall Street, Century 21 (c21stores.com) has seven floors of heavily discounted designer stock – all clothing is at least 50 per cent off.

On the Upper West Side at 2085 Broadway, Bloomingdale’s Outlet (bloomingdales.com) opened in 2015, while Saks Off Fifth (saksoff5th.com) does equally smart fashion and accessories on 57th Street. If you can wait until next April, Empire Outlets (empireoutletsnyc.com) opens on Staten Island with factory shops for Nike, Gap, Brooks Brothers and Levi’s. 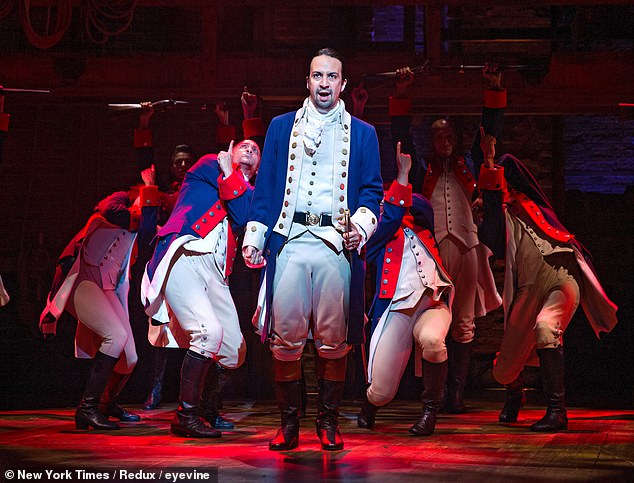 Some of the biggest hits in New York have lotteries for tickets, including Hamilton ($10), pictured, and Book Of Mormon ($32) – you can enter from your phone or laptop

Buy from the TKTS booths in Times Square, Lincoln Center and South Street Seaport and save up to 70 per cent on theatre tickets. Downloading the TKTS app will let you see which shows are on offer first (tdf.org/nyc/7/TKTS-ticket-booths). Some of the biggest hits in New York have lotteries for tickets, including Hamilton ($10) and Book Of Mormon ($32) – you can enter from your phone or laptop.

Broadway For Broke People (broadwayforbrokepeople.com) has the most up-to-date information on shows.

This 19th Century time-capsule has been beautifully renovated and harbours one of the world’s most stunning hotel atriums – a nine-storey affair capped by a pyramidal skylight. Instagram heaven.

The renovation of The Beekman, in the Financial District, has made it one of New York’s hottest hotels. The building, erected in 1883 and originally called Temple Court, was one of the city’s first skyscrapers. 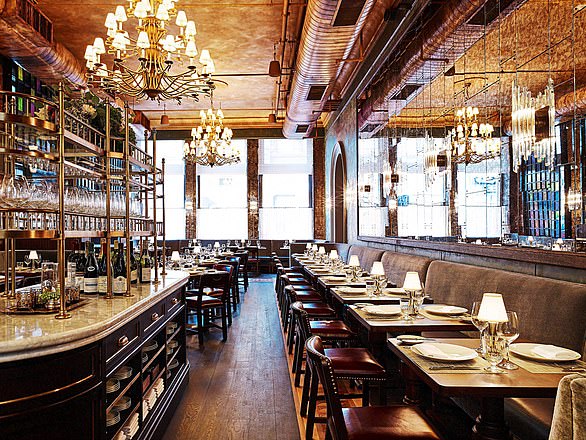 Ted Thornhill stayed at The Beekman and ate at its Temple Court restaurant, pictured

Over the years it housed architect and law firms, but it fell empty in 2001. The building was later purchased by Thompson Hotels, which spent two years transforming it into a glamorous, 287-room hotel. It opened its doors in 2016. Our one-bedroom suite was beautiful, with aged oak floors, a sumptuous bed and marble bathroom.

A highlight was our meal at the Temple Court restaurant, run by celebrity chef Tom Colicchio. The highly impressive tasting menu included sablefish mousseline, butter-poached prawns with pea ravioli, and wagyu with morels.

Double rooms from £400 a night (thebeekman.com)

The Wagner is at the south-western tip of Manhattan by Battery Park and the Statue of Liberty is just over half a mile away across the water, in plain sight of many of the bedrooms. Needless to say, it’s easy to reach the Statue by boat from the hotel – sightseeing ferries leave from a pier just yards away. 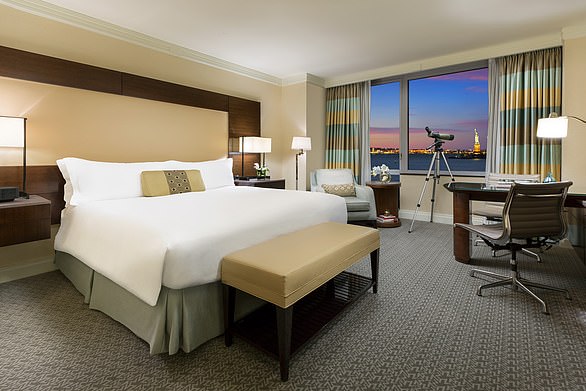 Our suite featured soothing pastel colours, a ginormous bed and a swanky bathroom with double sinks. The bedside lamps and bathroom lights have dimmer switches, so a cosy atmosphere can be rustled up in seconds.

The Wagner may be in the Financial District but it’s easy to see why this area is enticing for tourists, too.

Statue of Liberty Suite from £600 a night (thewagnerhotel.com)

Photograph of the week: Venice, Italy – A Luxury Travel Blog