Puerto Rico tourism officials say massive street protests calling for the resignation of Puerto Rico Gov. Ricardo Rosselló have not yet significantly impacted San Juan tourism. Yet protests are expected to continue throughout the week in areas frequented by visitors, imperiling the destination’s nascent recovery from 2017’s devastating storms.

The protests follow the publication of nearly 900 pages of private text messages between Rosselló and his political inner circle in which they profanely insult women and gay people, and mock everyday Puerto Ricans, including Hurricane Maria victims.

Rosselló apologized to Puerto Rico’s citizens in a Facebook video posted Sunday. He also will not seek re-election and will resign as leader of his political party, he said.

But then Rosselló also said he won’t resign, leading to Monday’s demonstration that shut down a major city highway and was described in media reports as Puerto Rico’s largest protest in nearly 20 years.

Yet protests have also occurred within the Old San Juan historic district, the centerpiece of island tourism, with some extending late into the evening. DPR has recommended travelers take precautions while traveling in Old San Juan. The protests have led some cruise lines to re-route ships away from the city.

“We have not seen an impact to flights or hotels, with all operating as usual,” he added. “We recommend that all travelers give themselves additional travel time when visiting other areas of the Island, as well as to and from the San Juan airport.” 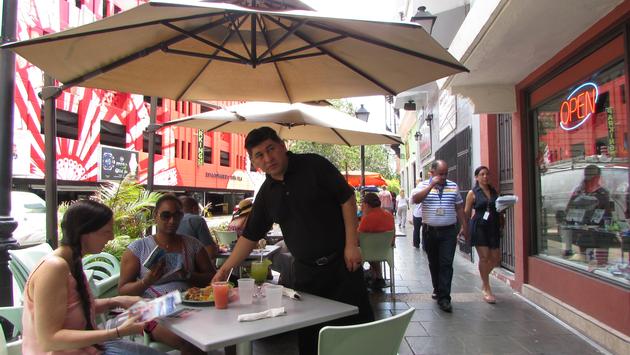 Carey said the demonstrations will cause some attractions in and around scheduled protests areas to close temporarily. Nevertheless, several protests, while peaceful, have grown organically, with people across the island stepping onto their balconies and into courtyards and streets at 8 p.m. each evening to bang pots and pans for an hour or more.

Several travel agents expressed a slight apprehension regarding their clients’ future Puerto Rico travel. Randy Adams of Brick, N.J. has “Some mild concern for clients on an upcoming August cruise on RCCL. Puerto Rico is one of the scheduled stops on a seven-day day vacation.”

Added Sherrill Schier of Elgin, Texas “I am so glad my clients did the round trip Caribbean out of Puerto Rico last month or they would have canceled. They can’t deal with stuff like this.”

But other agents downplayed concerns. Maci Cozart of Passport for Adventure Travel in Hickory Creek, Texas said her clients include a couple who arrived in San Juan Saturday for a Royal Caribbean to St. Thomas departing the next day.

“What I told them was what the real situation going on in Puerto Rico was,” she said. “After that, I told them it’s ultimately their decision, but I would go to Puerto Rico with my kids tomorrow.”

Danielle Lewis of Pittsburg, Pa. added “I’ll be in San Juan from August 4 to the end of September. I’m not worried.”

Still, with Rosselló showing no inclination to resign, the protests may continue indefinitely, threatening what to date has been an impressive rebound from the 2017 hurricanes.

Puerto Rico recorded 1.67 million arrivals across its San Juan, Ponce, and Aguadilla airports between January and April, the most-ever for the period in island history, said DPR officials, who are driven to realize what had been shaping up as an impressive bounce-back.

“Puerto Rico’s tourism industry is an integral path forward for the economy,” said Carey of DPR, “and [we are] determined to keep the destination on its path towards having a record-breaking year.”

It’s not just you: Plane toilets really are shrinking

No, you’re crying: Couple gets married on Jetstar flight between Australia and New Zealand