This is one sure-fire way to feel like royalty.

Holidaymakers can now rent a newly opened and restored apartment within the medieval Clock Tower of  Bamburgh Castle, which has played host to a succession of monarchs and has blockbuster views of the stunning Northumberland coast to Holy Island from its lofty position 150ft up on a volcanic plinth.

The three-bed self-catered accommodation is set across the three storeys of the tower, with guests able to enjoy amazing sea views amid beautifully rustic decor – as well as peer down to one of England’s most treasured cricket pitches and gaze across to the Cheviot Hills. 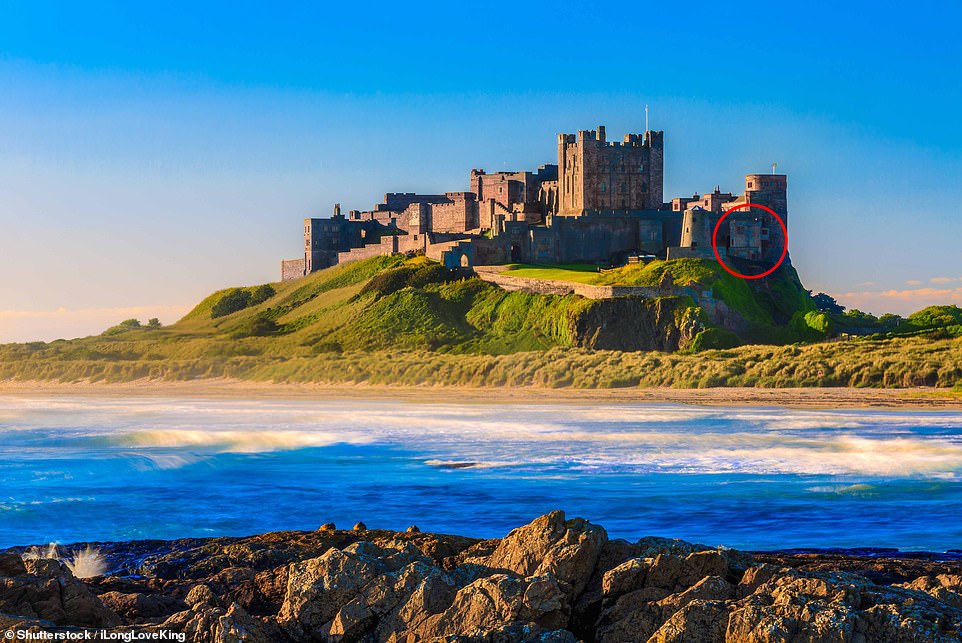 A three-bedroom apartment, circled, within stunning Bamburgh Castle on the rugged Northumberland coastline has become available as a holiday rental 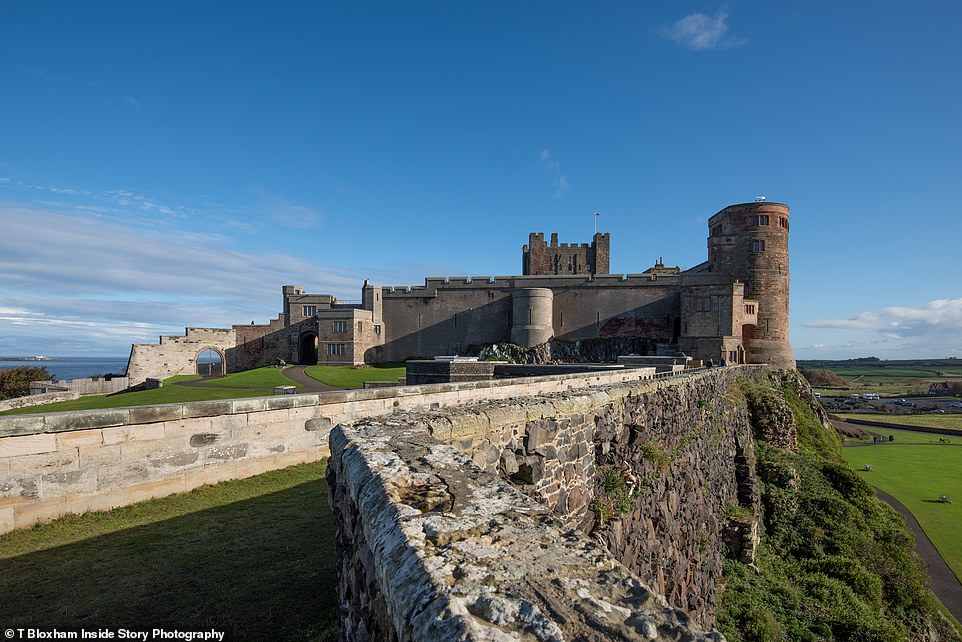 The incredible apartment is inside the three-storey medieval Clock Tower, which joins onto a vast corner turret. It’s pictured to the right of this image 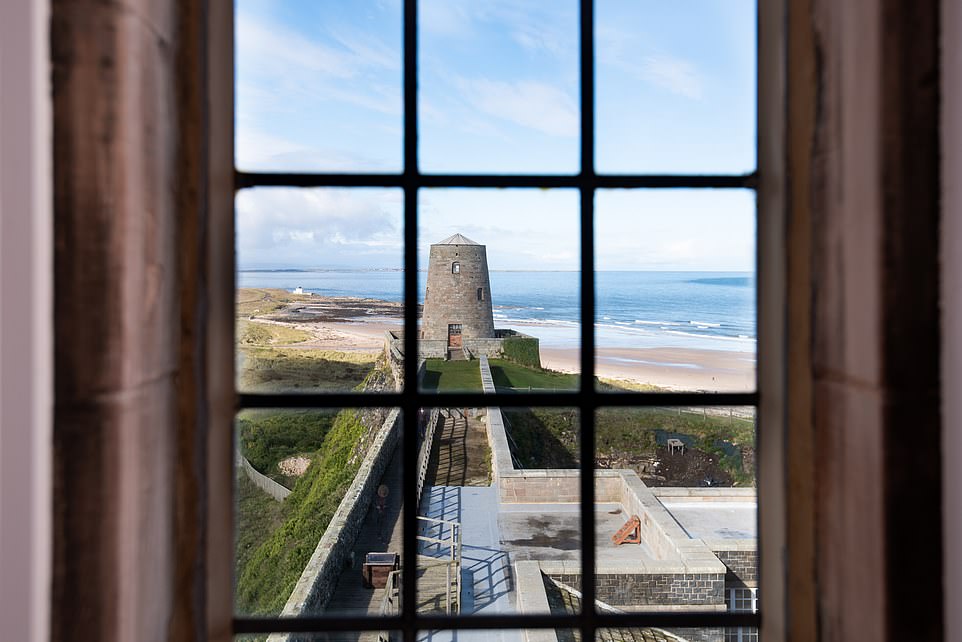 The views from the Clock Tower apartment are blockbuster, as this image highlights 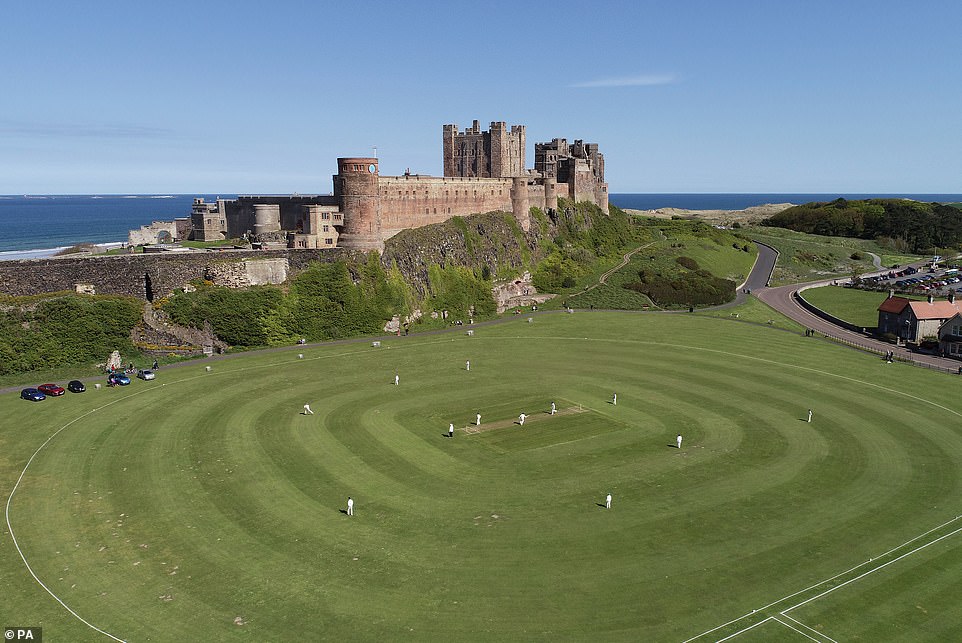 The Clock Tower dates back to the 13th century when it was built into the 1,400-year-old castle’s walls.

It links the castle’s curtain wall to a huge 13th-century turret. Slightly confusingly, the Clock Tower itself doesn’t have a clock – but has historically always carried that name.

The clock used to be on the castle Keep, but was moved to the corner turret in the 19th century to enable more villagers to have sight of the time.

The tower has been transformed into a holiday let by the castle’s owner, Francis Watson Armstrong, and is listed on holiday cottage website Crabtree & Crabtree. 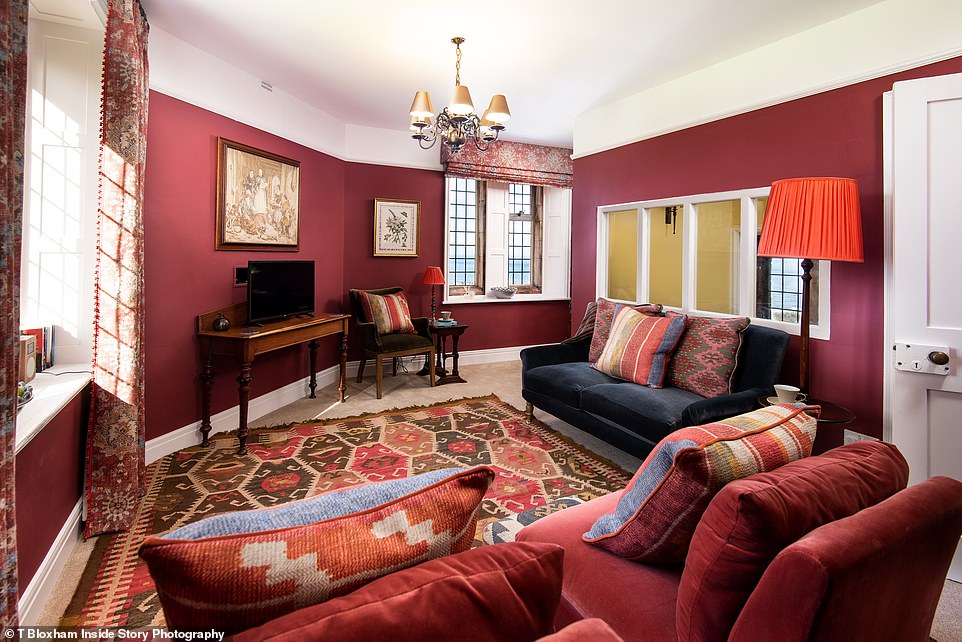 The Clock Tower has been transformed into a holiday let by the castle’s owner, Francis Watson Armstrong 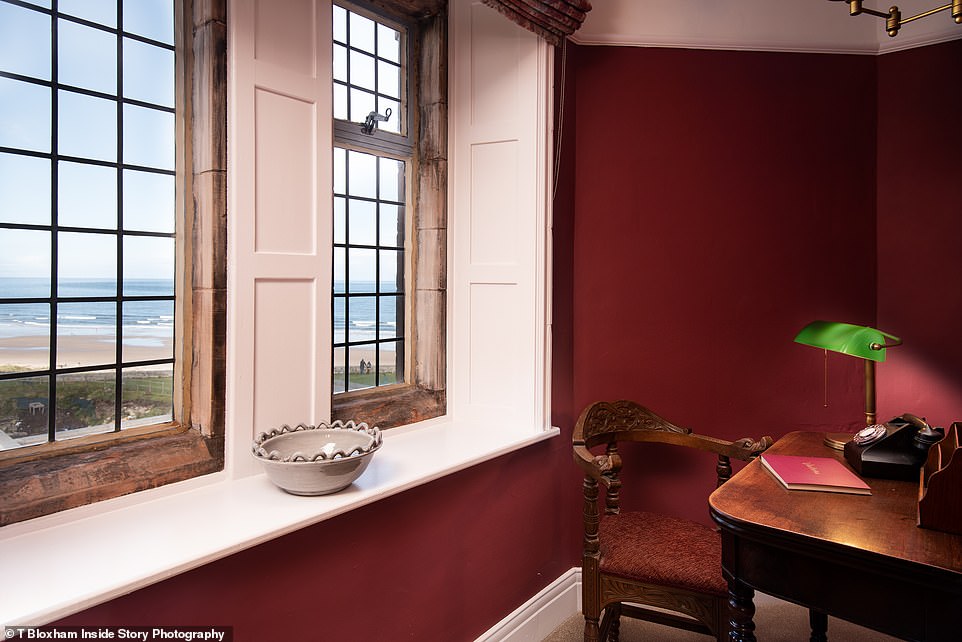 According to its listing, the rental has a ‘lofty open-plan living area’ with mullioned windows 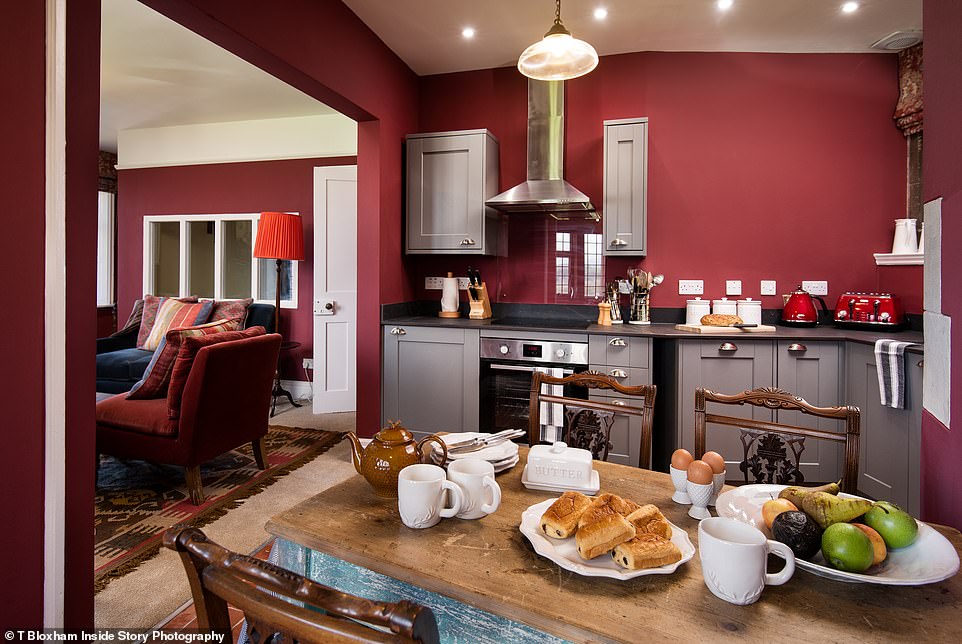 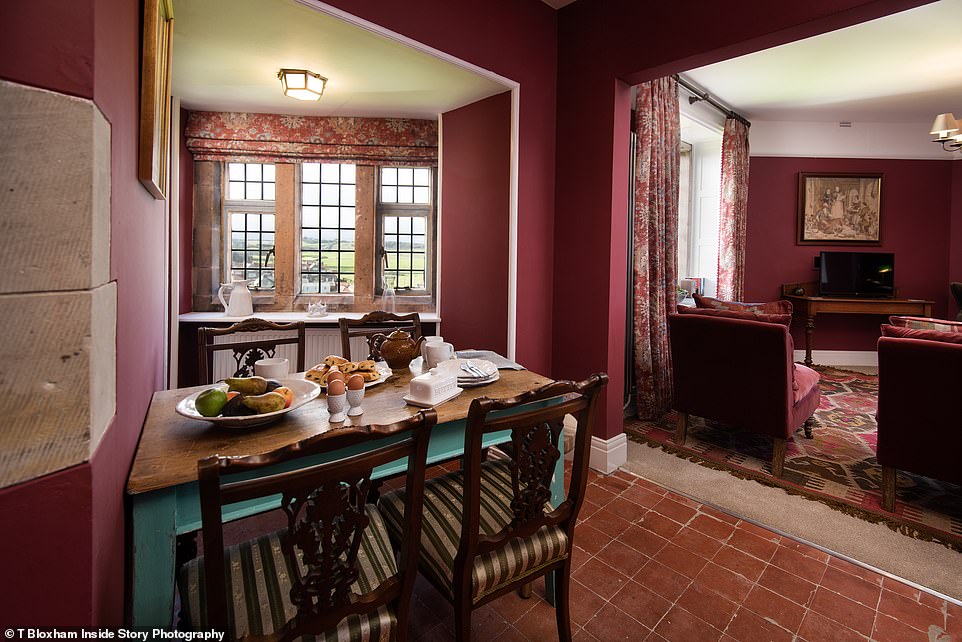 The Clock Tower dates back to the 13th century, when it was built into the 1,400-year-old castle’s walls

The rental has a ‘lofty open-plan living area, where mullioned windows and a line of internal windows look out in multiple directions across the coastline and castle green’.

It has ‘inviting velvet sofas and armchairs’ as well as a ‘rustic dining table’ that is linked to the contemporary kitchen.

At the top of the tower, up the ancient stone staircase, is the ‘sumptuous’ master bedroom, which is ‘resplendent in deep Farrow & Ball crimson and feels suitably regal with its king-size bed adorned with tapestry-inspired Morris & Co fabrics’, says the listing. 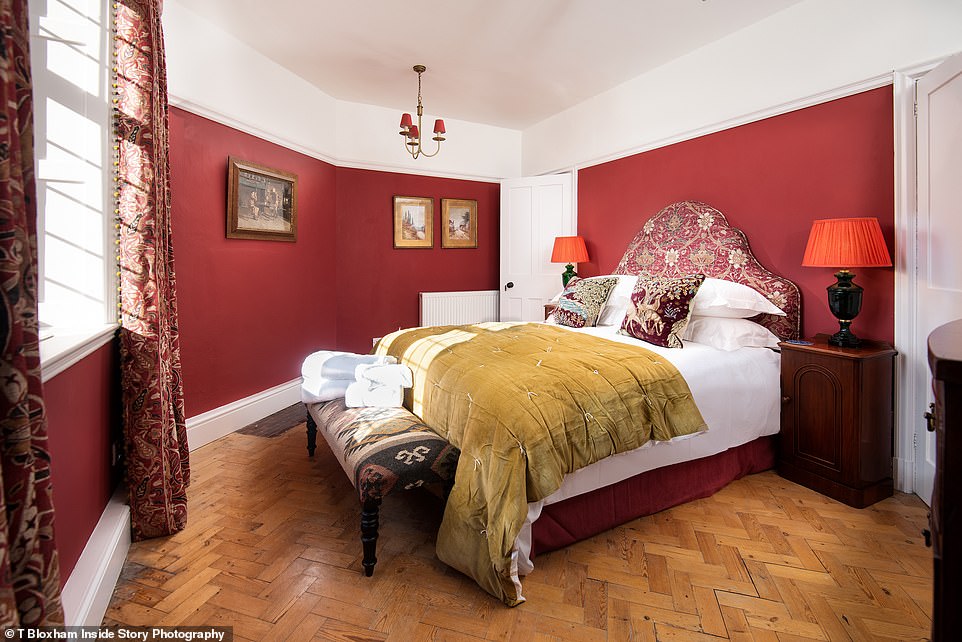 The ‘sumptuous’ master bedroom, which the listing says is ‘resplendent in deep Farrow & Ball crimson and feels suitably regal’ 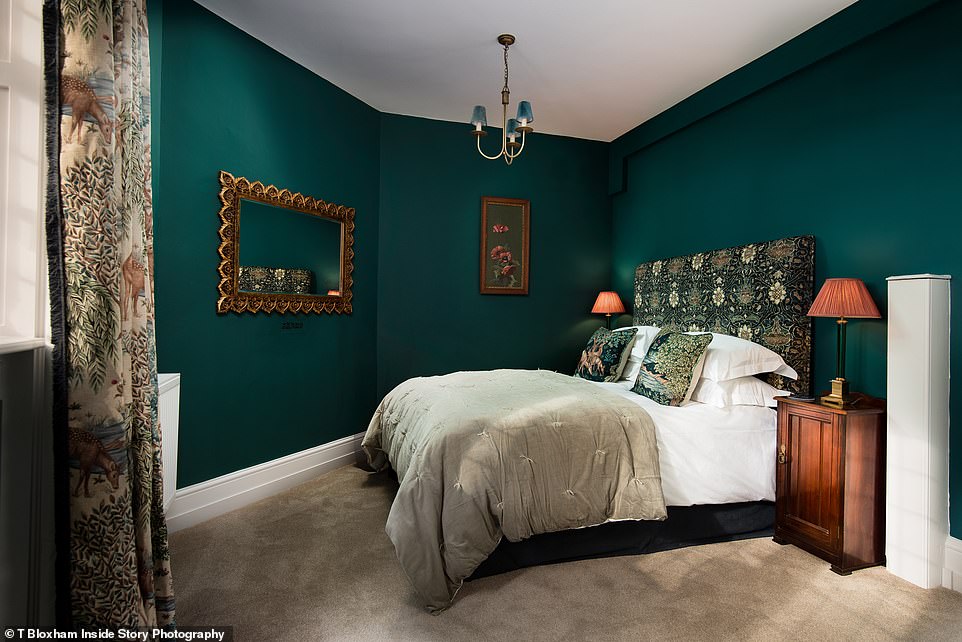 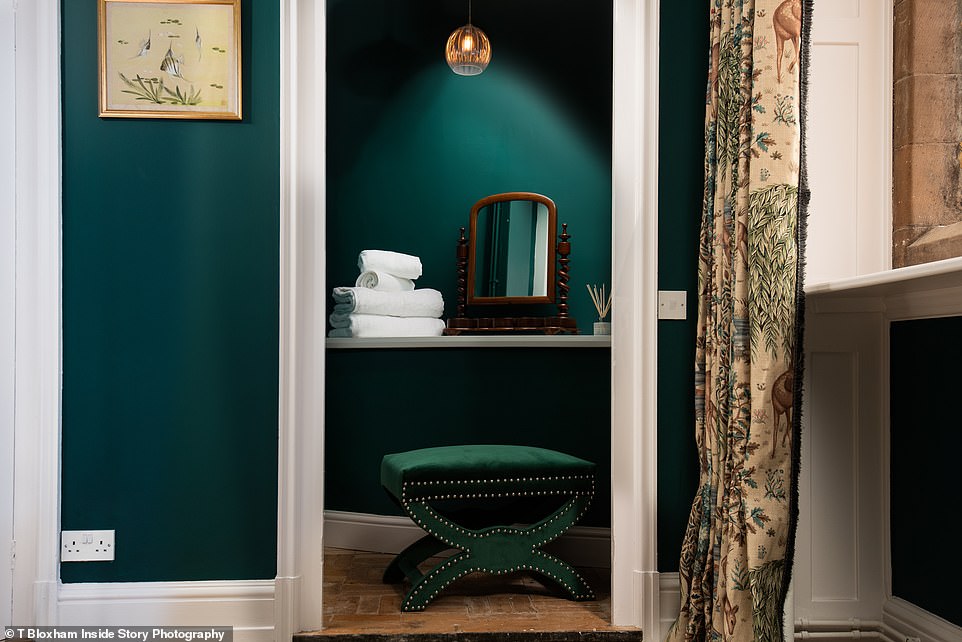 Charming: One of the bedrooms has a tiny dressing room, hidden away 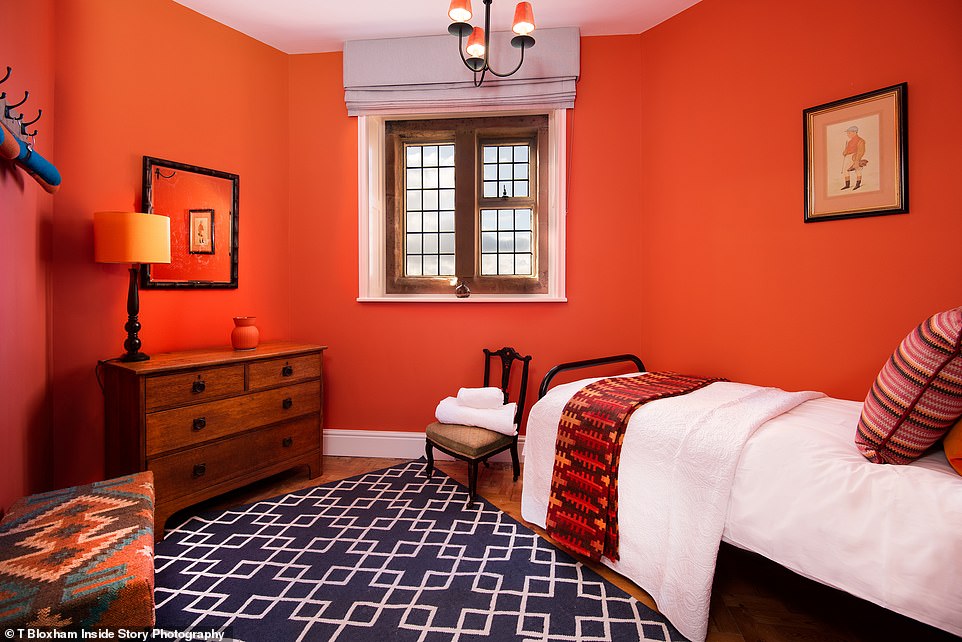 The eye-catching single room in the apartment. The listing says: ‘The blend of ancient and new is a design thread that runs throughout this eclectic property’ 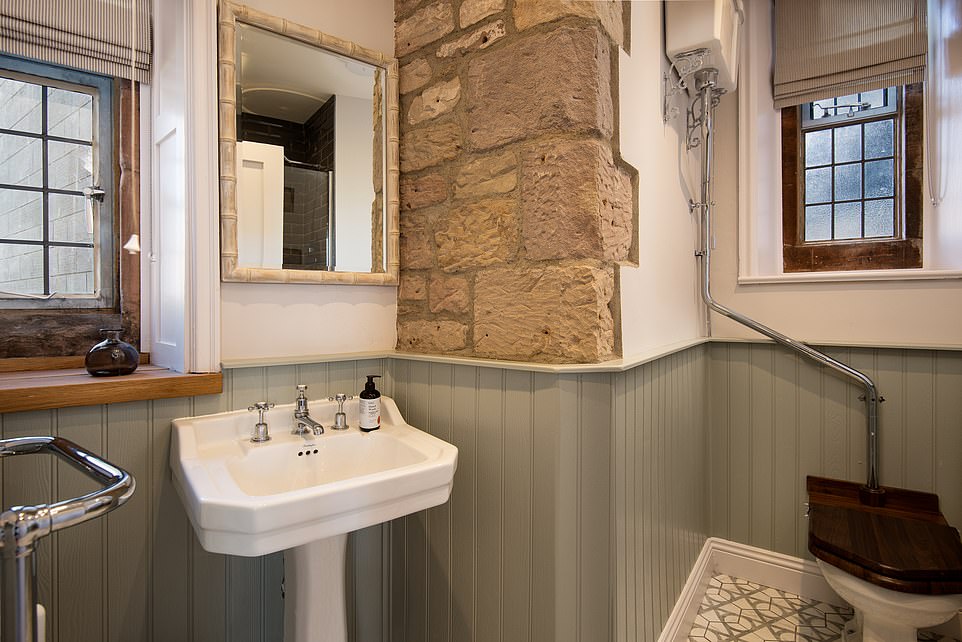 Seven-night stays in the apartment start from £1,325 and it sleeps up to five people

It also features an en-suite shower room and powder room tucked away in a turret.

Another opulent double bedroom and a charming single room, ‘daubed in striking teal and orange respectively and each complemented by rich Morris & Co fabrics’, are located one floor down.

The listing states: ‘The blend of ancient and new is a design thread that runs throughout this eclectic property, juxtaposing rich heritage fabrics with Aztec-inspired textiles, slick bathrooms with exposed stone walls and antique furniture with modern Pooky lamps.’

The Clock Tower boasts two entrances – one on the lower ground floor and another on the ground floor – and a small, sheltered private courtyard for ‘al-fresco lunches and sundowners’.

As a bonus, Clock Tower guests enjoy complimentary admission to the castle’s staterooms during opening hours and have the opportunity to enjoy the castle grounds once visitors have left. 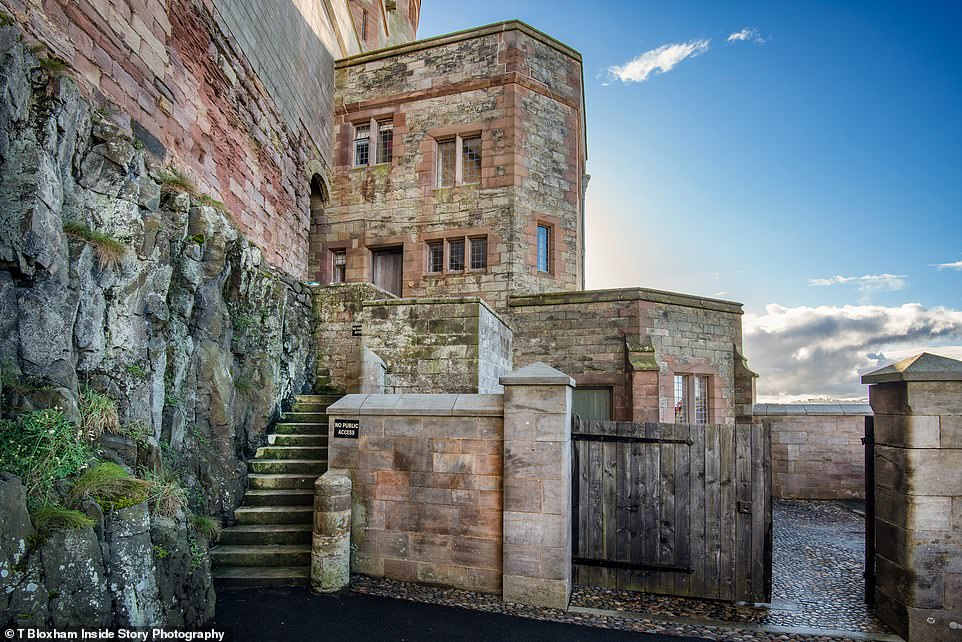 The steps where guests gain access to the tower. It boasts two entrances – one on the lower ground floor and another on the ground floor 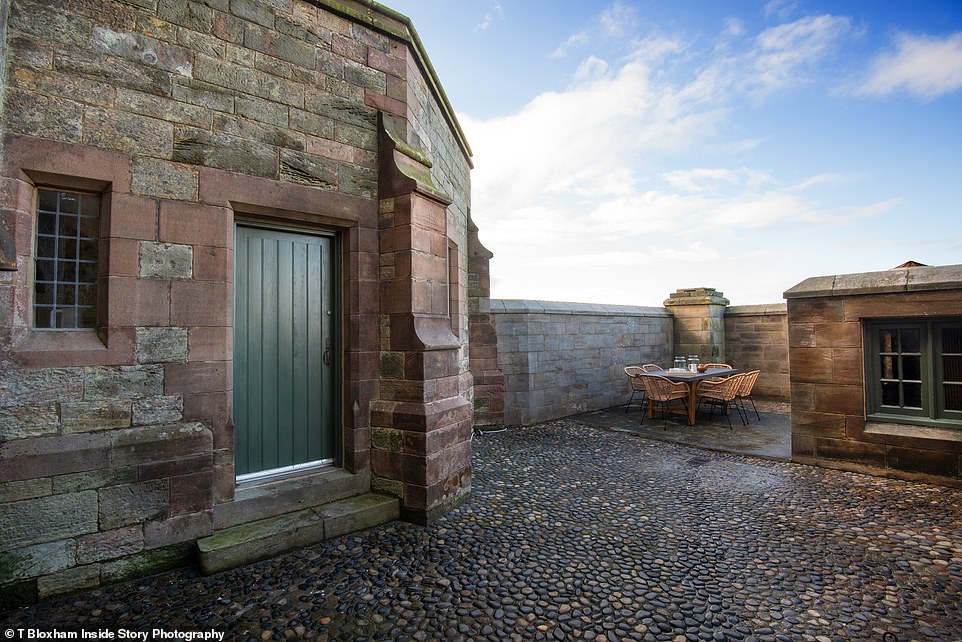 The holiday rental has a small, sheltered private courtyard for ‘al-fresco lunches and sundowners’ 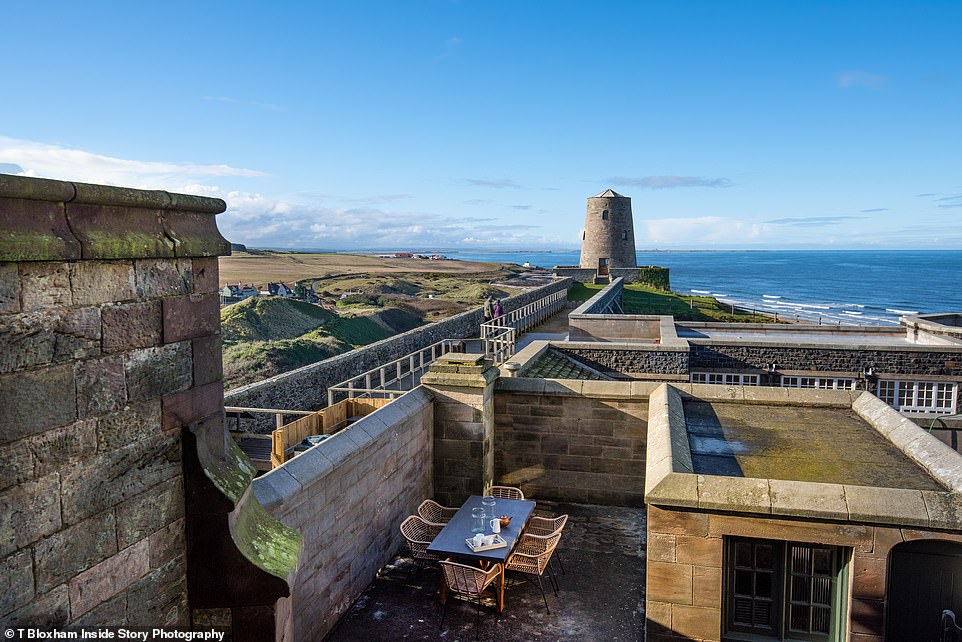 Emma Crabtree, founder of the holiday rental company Crabtree & Crabtree, said: ‘The village of Bamburgh has always been a favourite with our guests. Currently, [our] holiday bookings for 2021 are up 118 per cent’ 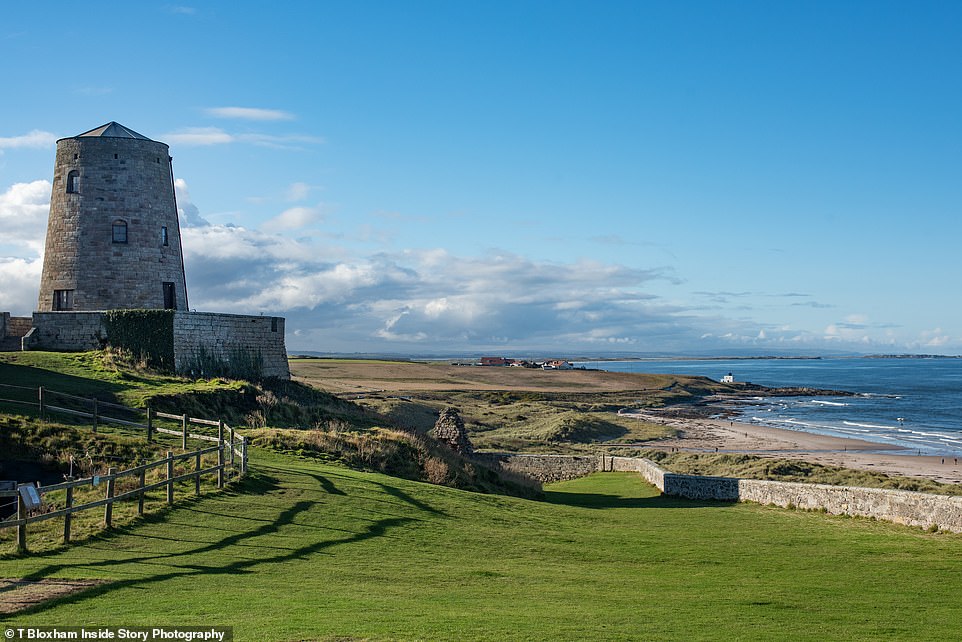 Legendary figures who have stayed at Bamburgh Castle include Anglo-Saxon kings as well as Henry III, Edward I and Henry VI

Founder Emma Crabtree said: ‘We are beyond excited to be adding this outstanding apartment exclusively to the Crabtree & Crabtree collection.

‘The village of Bamburgh has always been a favourite with our guests. Currently, Crabtree & Crabtree Bamburgh holiday bookings for 2021 are up 118 per cent, so we are encouraging those that are interested to snap it up quickly.

‘We are fully expecting the Clock Tower to be in demand as much as its sister property, Neville Tower, which is currently booked up until January 2022.’

Seven-night stays in the apartment start from £1,325 and it sleeps up to five people.

Legendary figures who have stayed at Bamburgh Castle include Anglo-Saxon kings as well as Henry III, Edward I and Henry VI.

THE TURBULENT HISTORY OF BAMBURGH CASTLE 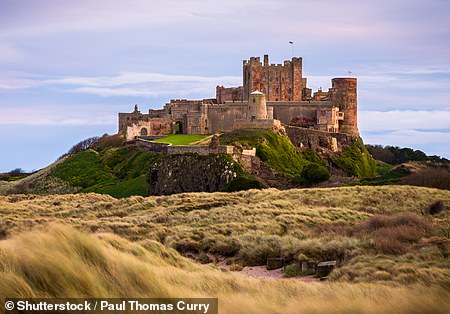 Bamburgh Castle’s mighty keep, which remains at the heart of the castle today, was built in the 11th century

The Anglo-Saxons were the first to hail the village of Bamburgh as a place of importance thanks to its location next to a natural harbour and the North Sea.

In 547AD, a wooden stockade was built as the original Bamburgh Castle, but by 993AD it had fallen into disrepair following a number of invasions of Northumbria – most notably by the Vikings.

By 1095, William the Conqueror’s forces had arrived in Bamburgh to wrest power from the Northumbrian kings. The castle’s mighty keep, which remains at the heart of the castle today, was then built.

The castle then became a home for royalty, hosting King John, Edward I, Edward II, Edward III and Henry III. It was also home to Henry VI during the War of the Roses in 1464 and became the first castle in England to be damaged by gunfire.

By 1610, the castle was gifted to Claudius Forster – the castle’s last royal keeper – by James I but he was unable to afford its upkeep.

In 1701, the castle was passed to the last heir of the Forster family, Dorothy, who married the Bishop of Durham, Lord Crewe.

After her death, he set up a charity to restore the castle and to support the people of Bamburgh. Under the guidance of castle trustee Dr John Sharpe, it became a surgery and dispensary for the poor and a free school for underprivileged children.

But by 1894, the castle fell into financial difficulties once again and it was eventually bought by Victorian industrialist William Armstrong – who set about restoring it.

However, he died before the work was completed and it eventually became the home of his family. They opened up the castle to visitors in the 1950s –  and it is still owned by the Armstrong family today.

CrosiEurope to launch Egypt sailings in 2020

Auckland: A trip to ‘Gibraltar’

This Exclusive Napa Valley Estate Is the Perfect Place to Social Distance With Wine, Food, and Farm Animals

The $400 reason to always switch your phone to flight mode