The pilot has an important announcement as we circle Kauai, part of Hawaii’s eight- island chain. ‘Hang tight folks, ground staff are just clearing a chicken off the runway.’

Of course, they are. Because this is a place of pristine natural beauty, complete with cloud capped rainforests, raging waterfalls, mystical sea cliffs — and feral chickens.

People come to embrace the elements, feel spiritual at sunset and shoot movies (Johnny Depp swaggered along the beaches of the Napali coast in Pirates Of The Caribbean), but as a family, we are keen to pack in some adventure before kicking back on Waikiki Beach on the neighbouring isle of Oahu. 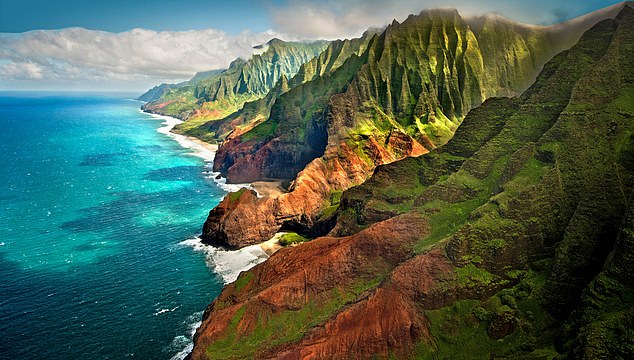 Mystical: The rugged Napali coast on the North Shore in Kauai

Thankfully, it’s 200 miles out of the firing range of the erupting Kilauea volcano on the Big Island.

Out on a limb in the middle of the Pacific, Hawaii is the most isolated, inhabited landmass in the world. Sitting close to the dateline in its own time zone (three hours behind West Coast U.S.), it’s the last stop before tomorrow.

With a population of just 65,000, there are more pigs than people on Kauai. Things move soulfully slow. Don’t expect to rush the girl at Banana Joe’s grocery store in Kilauea whizzing up your green juice in the morning.

Although there is a distinctly funky vibe in Hanalei Town — surf boards, food trucks and possibly the best bakery in the Pacific — it’s so relaxed you’ll find yourself turning in for the night with your children about 10pm.

The indigenous people, the Kanaka Maoli, are an unfathomably soulful lot, with wise, wide foreheads, disarming smiles and kind eyes.

Sadly, they are few and far between thanks to Hawaii’s first tourist, Captain Cook, who dropped anchor at Waimea Bay in 1778 bringing with him Western diseases that destroyed the population, estimated then at about half a million people, though it now stands at 8,000 descendants today.

What’s evolved since is a cultural mash-up — fourth generation Japanese, Chinese and Filipinos (brought over in the 19th century to work the sugar plantations) are juxtaposed with the Haole white people — mainly U.S. creatives: writers, poets, surfers, hippies and dreamers.

Theoretically this is America — Hawaii was annexed as the 50th state in 1959. But there is not a mall or freeway in sight, 70 per cent of the island is inaccessible by foot and there is only one coastal ring road, currently cut off on the westernmost stretch by mudslides. 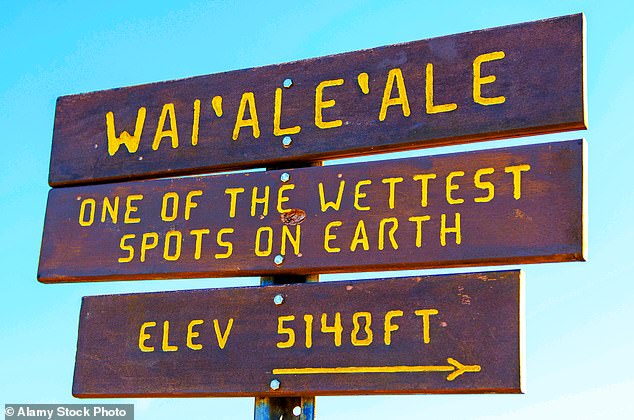 The sign to Wal’ale’ale, the island’s second highest point and one of the world’s wettest spots

If you want to explore the interior, a lethal slippery dew which locals call Hawaiian ice, means a guide is advisable.

We make arrangements with Purekauai.com, a concierge service founded by local Mr Fix-it, Phil Jones, who oversees a team of guides while offering access to the island’s most exclusive rental homes.

We choose Sea Song, a sprawling Asian-style estate on a secluded bluff on the North Shore (actor Pierce Brosnan lives a few bays away). I can’t stop gawping at the knockout views while the children — Grace, seven,and Georgia-Mae, six — enjoy the swing rope over the Kilauea river that runs into the Pacific below.

Our host Aaron, a Bear Grylls type with a backpack and six-pack, arrives with an itinerary that would leave a Hollywood action star out of puff. We get our bearings on a Blue Hawaiian Helicopter tour with Brian, one of the island’s most experienced pilots, a fact I repeat as we bob through the mists of Mount Wai’ale’ale, an extinct volcano crater, which is said to be the wettest place on earth. Further out across the Martian red rocks of the Waimea canyon, we spy a group of hikers taking selfies on a precariously high lookout point. 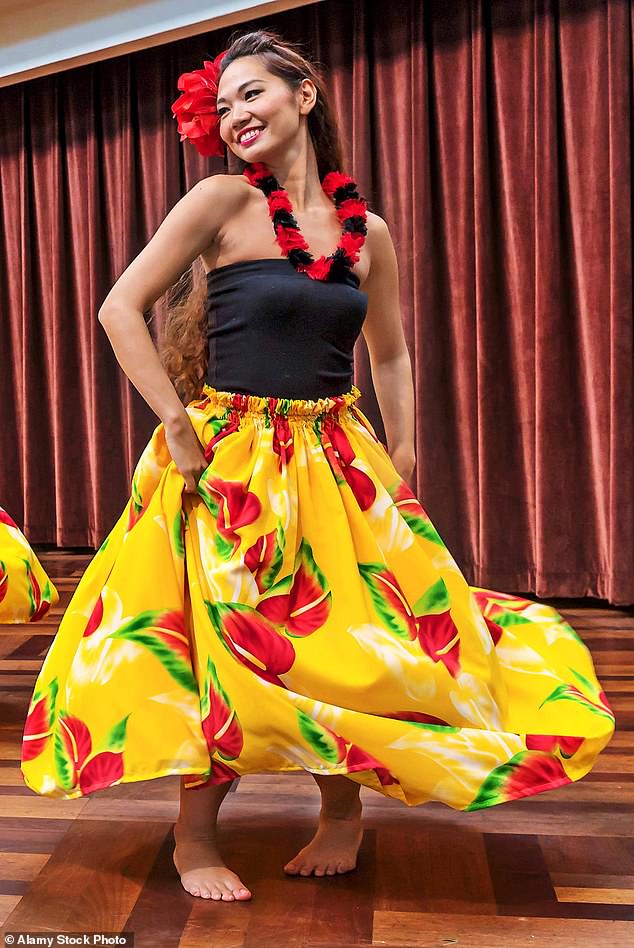 Taste of the tropics: A hula girl pictured above (stock image)

Back on terra firma, we watch Grace and Georgie’s confidence grow, as we hike, kayak and zipline through the valleys of the Princeville Ranch. We also kick back on the beach, chasing waves and wild chicken, ‘If you can catch ’em you can eat ’em,’ says Troy, a surfer dude.

Getting the girls to experience some culture is made easy by Captain Andy’s sunset cruise up the Napali coast. We ride the swells and get sandblasted with salty brine below extraordinary 3,000ft tall sea cliffs, but it’s worth it to see the Honopu Valley, an ancient burial site of Hawaiian Kings.

Their bones were hidden in the crevices of the cliffs by the tribe’s bravest warriors who were lowered down on vines and fell to their deaths after the burial to protect the secret location. The valley is so sacred no one is allowed to land on the beach without a permit.

We take a 20-minute flight to Honolulu on the island of Oahu, Hawaii’s international hub and surf hotspot. This is a city that bridges beach culture and urban buzz. You can eat sushi at Nobu, shop in Chinatown’s vintage stores and join a sunset yoga class.

We check into the Halekulani Hotel, which has morphed over 100 years from humble bungalow guesthouse into a two-towered sanctum of chic. We join a crowd around the 100-year-old Kiawe tree for the hotel’s nightly Hula show, performed by a former Miss Hawaii. My girls are enthralled. Better than Strictly.

Next morning their excitement goes off the scale with the arrival of Gone Surfing’s Caz and Trevor, Zac Efron lookalikes, who paddle them out to a surf break and have them gliding through the waves within the hour.

Hawaii is hard to wash off. As a family we bonded over the joys of nature and a simple life. People say Hawaii calls them and for me it’s true. I can’t get its siren song out of my head.

Hawaiian Airlines flies from Los Angeles to Honolulu and Lihue from £336 return, hawaiianairlines.com.

Purekauai.com rents homes from £230 per night. Sea Song (sleeping eight) costs £1,045 per night. Rooms at Halekulani from £389 per night, halekulani.com.

Atlantis, the Palm, to welcome White Beach in November