Home » Travel » Greetings! walkers, cyclists and dogs are all welcome at this Scarborough hotel

Checking in at a hotel while on a cycling and walking tour, I invariably feel the need to apologise. “Sorry about the muddy boots,” or “Sorry about my dripping bike – is there anywhere I can put it?” It’s one of the reasons I prefer to camp or use a hostel. No matter how “walker/cyclist-friendly” a hotel might purport to be, I almost always feel a bit out of place. So, I was intrigued by the possibilities of Bike & Boot, a new hotel that opened this month in the traditional North Yorkshire seaside resort of Scarborough.

The former Mount Hotel was boarded up when Simon Kershaw and Simon Rhatigan bought it last year. One of those large, gracious, sea-view establishments that forms an entire terrace, it had once been a hotel of some prestige, but its glory had faded. Having enjoyed careers in the hotel and leisure industries, the two Simons decided it would make the ideal venue for a joint venture. The renovation took 18 months and “roughly £2m” and has resulted in a hotel/hostel specifically for cyclists, walkers and dog-owners.

“They saw a gap in the market,” Jay, the general manager, told me, “and wondered why it hadn’t been done before.” 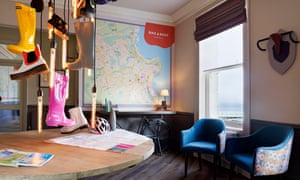 And there’s no denying this hotel has embraced the contemporary hostel vibe. Leaving my bike at the Wadobi – a basement equipped with a bike/surfboard/dog-washing area and cycle repair station – I checked in via touchscreen at a self-service desk. The friendly greeting from the (invariably young) staff, the bright decor, the walls plastered with huge photos of outdoor pursuits and oversize maps of the local area were all on-trend hostel-wise. The same can be said of the Retreat: a comfortable lounge where complimentary hot drinks are available 24 hours a day and free cake is served at teatime. There’s even a little cinema where three recently released films were being shown daily (for free), including one for children.

The ground floor is also home to the high-ceilinged Bareca – an abbreviation of “bar/restaurant/cafe”. I was informed that, like Wadobi (walk/dog/bike), Bareca had been trademarked by the hotel. I confess I found these freshly minted portmanteaux were trying just a little too hard.

While there’s a modern hostel feel downstairs, I felt I was in a boutique hotel as soon as I opened my bedroom door. Bike & Boot’s 65 rooms range from “boot rooms” (smallest doubles) to suites. Mine was somewhere in the middle: a “medium room with sea view” with a good king-size bed, blinds printed with vintage Scarborough posters, coffee machine, fridge with a selection of goodies (at mini-bar prices), and a generously-sized en suite with Bike & Boot-branded toiletries. Through the double French windows I had a view of Scarborough past and present: pedestrians took the air on the elegant, late-Georgian Spa Bridge, while paddleboarders bobbed about in the sea framed by a curve of red-tinged cliffs. 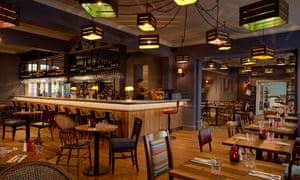 Owing to a series of mishaps, I’d turned up at the hotel with a malfunctioning bike. A young member of staff called Conrad did his best to fix it but had to give up the struggle. However, he did arrange for a local bike shop to pick it up, repair it and return it the next day, which was impressive. “While they’re doing that,” said Conrad, “why not have a spin on one of our electric mountain bikes?”

So I found myself zipping along the Cinder Track, a cycle/hiking path on the disused railway track that once ran 25 miles between Scarborough and Whitby. Farmland gave way to sea views as I passed Robin Hood’s Bay before pedalling out on to the viaduct high above the River Esk – the best way to enter Whitby. To return, I headed inland on minor roads flanked by cranesbills to visit hamlets and villages, the bike making mincemeat of the many hill climbs.

The following day, I tested out the hotel’s “boot” credentials. Filey Brigg is a slender peninsula 10 miles south following the first/last section of the Cleveland Way, a well-marked National Trail. Though Scarborough itself was busy, there were few walkers attempting this mainly cliff-top hike. It meant I could relax and take in the view of the high cliffs that run south to Flamborough Head. From Filey, I jumped on a train back to Scarborough (handily, the hotel is a five-minute walk from the station). 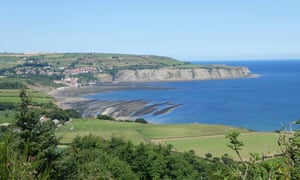 Naturally, all this exercise built up a healthy appetite and over the course of three nights at the Bareca, I sated it with Mediterranean pizza, a mixed-vegetable pasta dish, and a soya, beetroot and red pepper burger, all reasonably priced. In the morning, the buffet breakfast (disposable gloves were supplied) was a range of cereals, drinks and pastries. This was so popular, I didn’t see many people opting for the cooked breakfast available for a small extra charge.

It was noticeable that most of my fellow diners were holiday-making families and couples rather than hostel groups clad in outdoor gear (mine was the only bike in the Wadobi and I didn’t see a single dog or walking boot). There were also a lot of them. “Bookings have been flooding in,” said Jay, before mentioning plans for five further Bike & Boot hotels, including one in the Peak District and another in Sherwood Forest.

From the evidence at Scarborough, they’re likely to prove popular – and my own bike and boots felt very welcome. It will be interesting to see whether their clientele will actually be cyclists and walkers seeking an upgrade, or less adventurous types simply after a fun, good-value hotel.

The 5 best places in France for luxury travel

Department of Transportation Announces Flights Between the U.S. And China Can Increase