There’s something regal about arriving at the King’s Head pub with its hefty, iron-studded door and well-worn flagstone floors. Once inside you pass a medieval fireplace that wouldn’t be out of place in a palace.

Pub manager Harry stands behind the brass pumps on a black granite bar and offers a hearty welcome while polishing glasses. Around him sit 19 bottles of gin and half a dozen tonics – 114 cocktail permutations, I’m told. 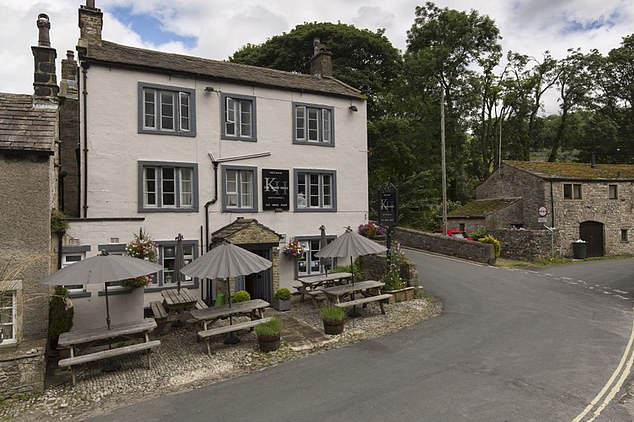 The King’s Head pub in Kettlewell, North Yorkshire, which has a historic feel

But it is a foaming pint of honest Yorkshire beer that really beckons: a Hetton Pale Ale from the Dark Horse Brewery ten miles down the road.

Despite the historic feel of this Yorkshire Dales retreat, the owners Michael and Jenny Pighills have renovated everything since arriving six years ago.

Wooden furnishings have been sanded back to the grain and trimmed with a fresh lick of paint (Farrow & Ball No 82 Dix Blue, in case you wondered). To the rear, a thick-carpeted staircase winds past a library cupboard full of books and DVDs.

Accommodation comprises half a dozen bedrooms spread over two floors, and each named after a monarch. There’s a grand suite to celebrate Charles I and a luxury pad named after King George III.

The top floor, King Edward VII, is where I stayed. It’s a comfy, twin-room with lots of stylish touches and an ensuite complete with Duck Island toiletries.

Tea-making facilities sit alongside a plate of shortbread biscuits from the pub chef. Look out the bedroom window and there is a view of Upper Wharfedale. 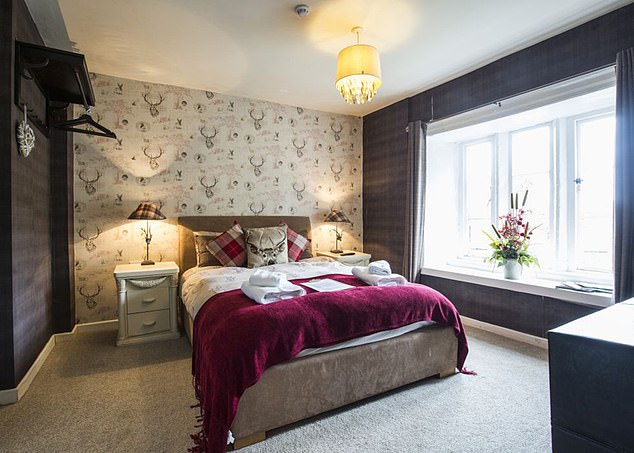 Regal touch: The pub has half a dozen bedrooms spread over two floors, and each named after a monarch

B&B doubles from £80 a night. For more information visit  thekingsheadkettlewell.co.uk.

The village sits where the River Wharfe and Kettlewell Beck meet and is a mix of limestone bridges and cottages. It was the setting for the 2003 film Calendar Girls, starring Helen Mirren and Julie Walters.

Good walks abound and I started with a two-mile meander along sheep trails to the neighbouring village of Starbotton.

For something more invigorating, there’s a five-mile hike west over a 1,500ft limestone ridge to Arncliffe, a village with its own claim to fame as the fictional Beckindale in early episodes of TV soap Emmerdale.

After all this exercise, you are in for a treat back at the pub’s restaurant. Chicken Wensleydale – poultry stuffed with cheese and apricot and wrapped in pancetta – was the star of the show.

The USP: It sounds regal but it’s really relaxed with surroundings so beautiful it’s no surprise they’ve been in the movies.

The rooms: Thoughtfully designed, mixing modern appeal with a touch of class so they suit blue-bloods and commoners alike.

The food: It’s easy to see why the kitchens have earned an AA Rosette for culinary excellence. I long for another portion of that chicken breast with Wensleydale cheese. Cracking, Gromit.

COVID-19 in July: Which US States Are Still Restricting Travel?

Carnival to demand COVID passports despite Florida and Texas bans

Expats: Asian cities found to be most expensive for life abroad but London ranks in top 20