Half-buried cathedrals, crumbling villages where tourists are banned and gold mining settlements that have lost their sparkle: A Halloween bucket list of the world’s creepiest ghost towns

They were once thriving towns bustling with people, booming with business and boasting plenty of natural resources.

But as these eerie images show – not any more.

The fascinating pictures feature in the book Ghost Towns by Chris McNab, which reveals lost worlds from deserted Italian mountain villages to gold rush towns that have seriously lost their sparkle.

The tome examines the reasons why these places have been deserted with the collapse of local industry, earthquakes, volcanic eruptions, war and man-made chemical spills all responsible for the onset of abandonment.

All in all, it’s a Halloween bucket list that’ll send shivers up your spine.

Scroll down to see a selection of haunting pictures from the book, published with kind permission from Amber Books Ltd. 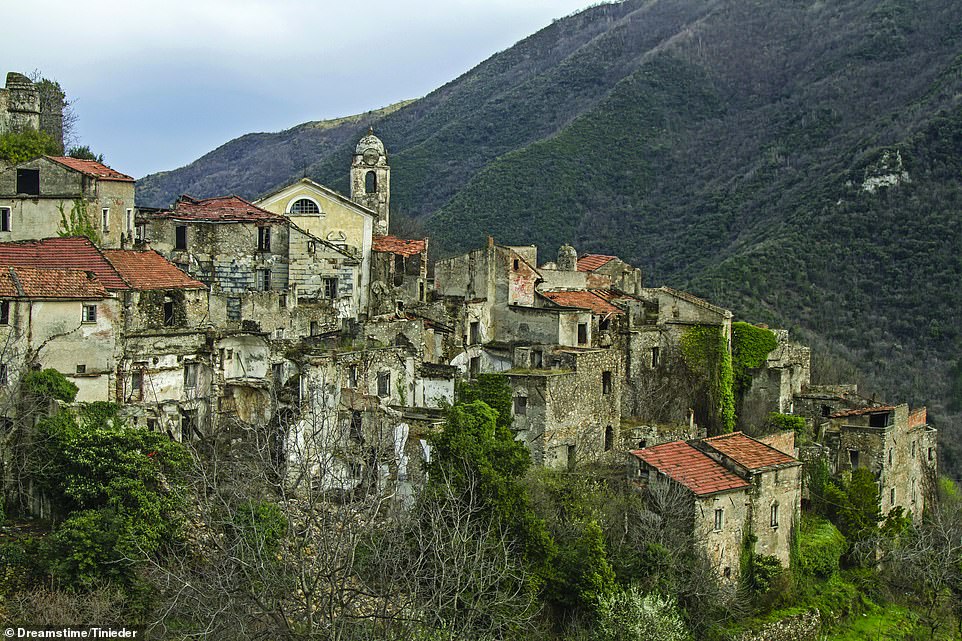 Balestrino, pictured, is one of the most intriguing ghost towns in Italy. Situated 43 miles southwest of Genoa, the town dates back to the 11th century, and has a turbulent political and military history. Its decline began with Italian occupation in the 19th century, but was cemented by earthquakes and hydrogeological instability, with the last residents leaving in 1953. The fact that the town is cordoned off to visitors makes it even more compelling 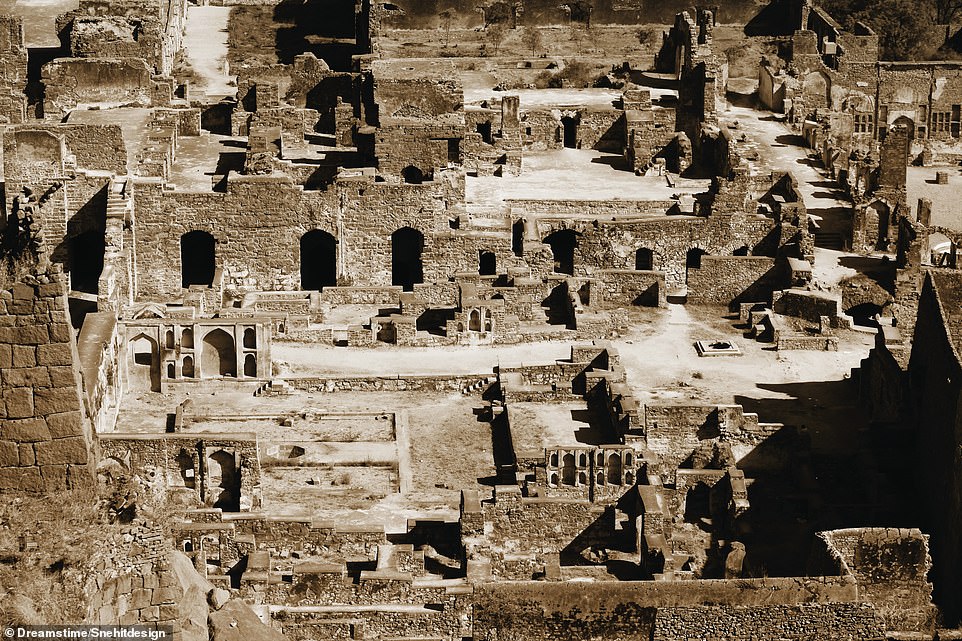 Situated seven miles from Hyderabad in India, the Golkonda Fort, pictured, formed the capital of the kingdom of Golkonda in the 14th to 17th century. Built initially of mudbrick, the fortress was expanded with granite structures during the 16th century. During the 17th century, the fortress resisted a nine-month siege by the Mughal prince Aurangzeb, only succumbing when a traitor nefariously opened a gate from the inside 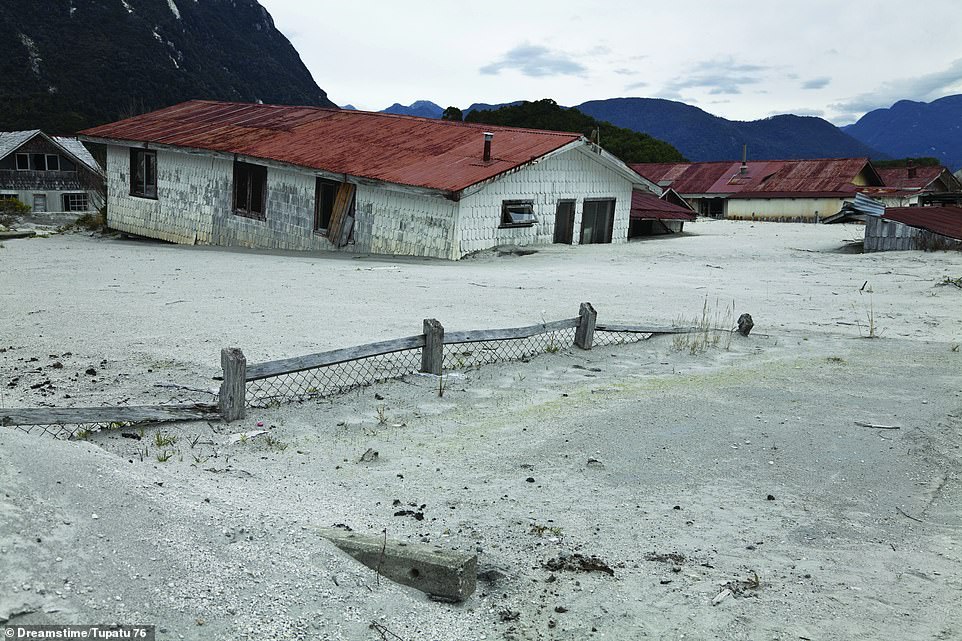 Chaitén in the Los Lagos region of Chile sat under the shadow of nearby Chaitén volcano for centuries. But in May 2008, the volcano decided to end its 9,000 years of silence. As the residents abandoned their homes, ash rained down on the town, and on May 12 a volcanic mudflow from the Blanco River swamped Chaitén and destroyed most of its buildings and infrastructure 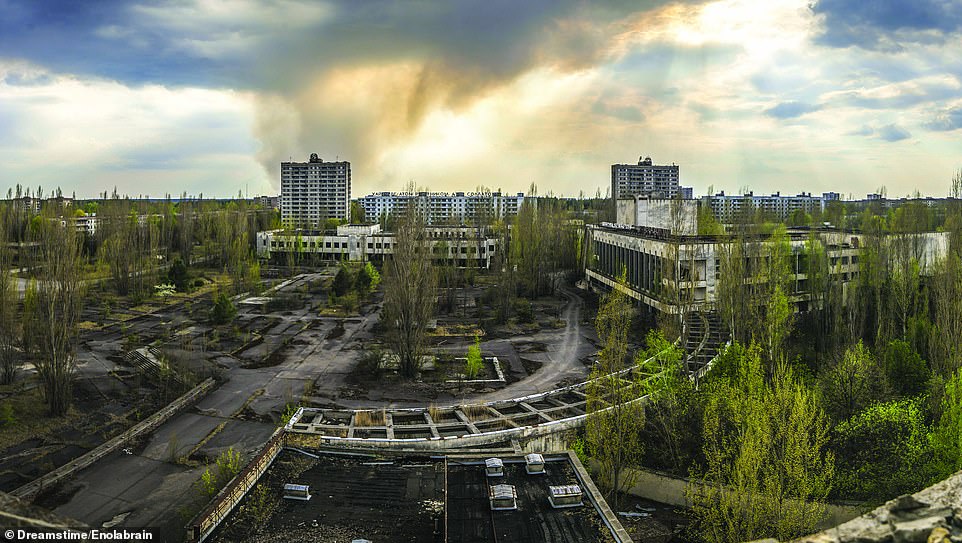 Pripyat in Ukraine remains one of the most notorious ghost towns in the world, blighted by its proximity to the Chernobyl nuclear power plant. Gradually the radiation levels have dropped, and government efforts to reclaim the city are starting to bear fruit. Nevertheless, there is still a 19-mile exclusion zone around the nuclear power plant, incorporating Pripyat 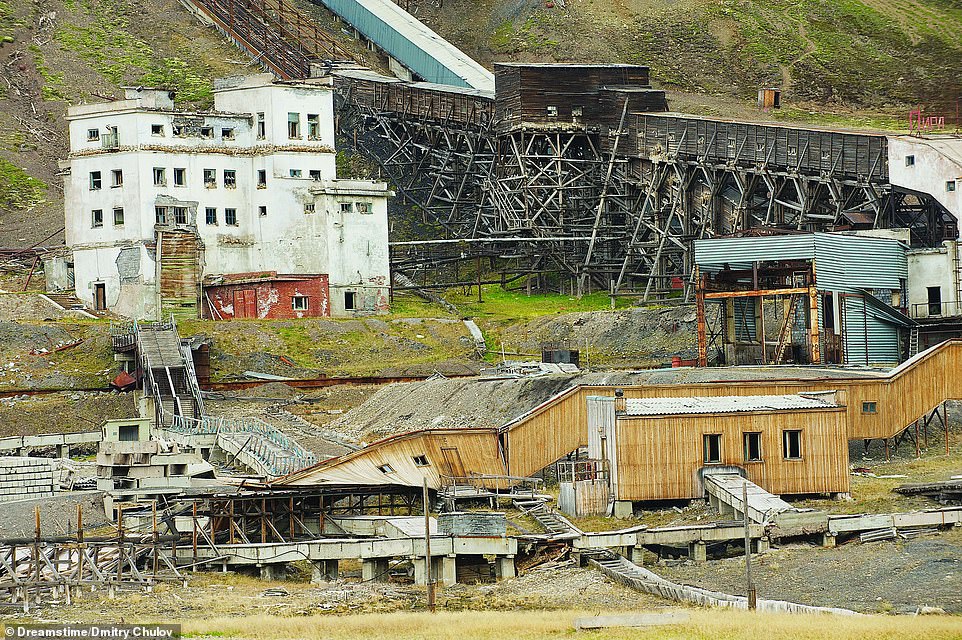 Pyramiden was a coal-mining settlement established on the remote Arctic archipelago of Svalbard in Norway in 1910. It was subsequently sold to the Soviets in 1927, and at the height of its productivity the settlement had a population of about 1,000 people. By the 1990s, however, the mining there was in decline, and the very last resident left in October 1998 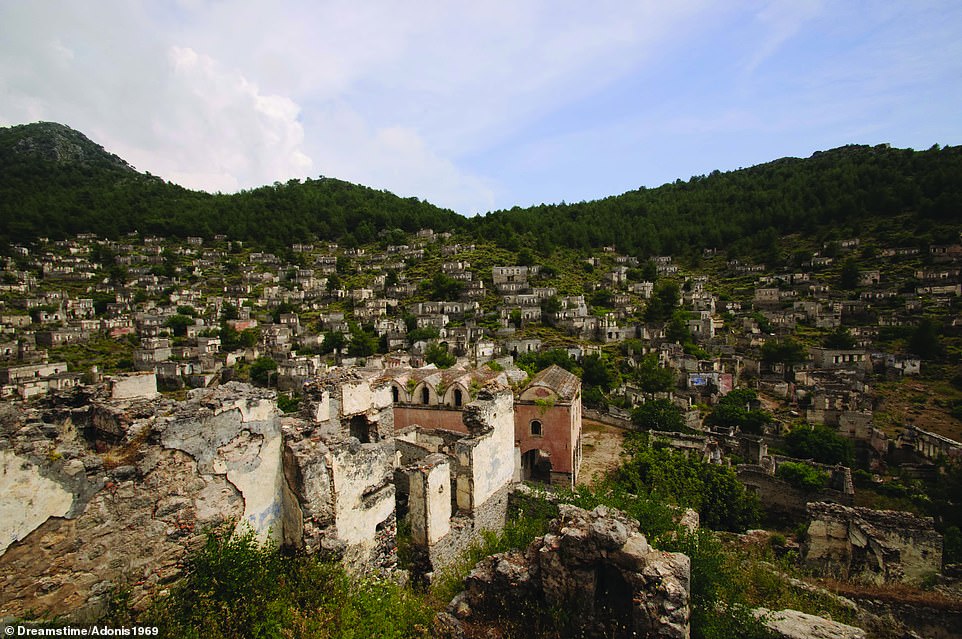 The ghost village of Kayakoy was once a lively and integrated Greek–Turkish community, just inside Turkey. Political changes with the fall of the Ottoman Empire, however, resulted in the expulsion of the Greek Christians and the beginning of the village’s decline. A subsequent earthquake finished the job 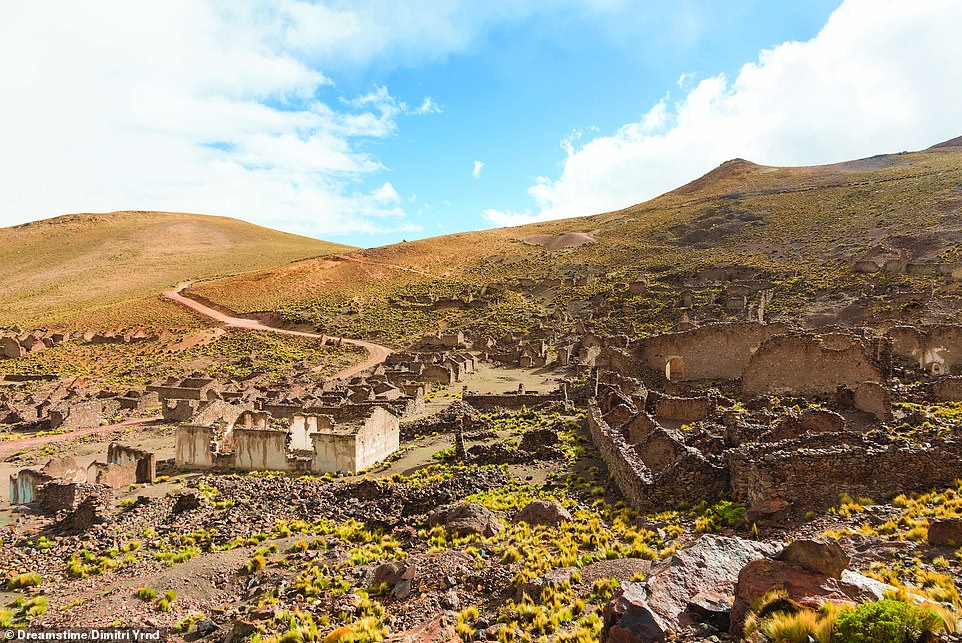 The history of the gold-mining settlement of San Antonio de Lipez in Bolivia stretches back to the 16th century. Today the only industries in the immediate area are related to agriculture, particularly to livestock such as sheep and llamas, potatoes and quinoa. The scale of the mining activity has now been virtually erased, but at one point some 150,000 people were living in the vicinity of the local mines 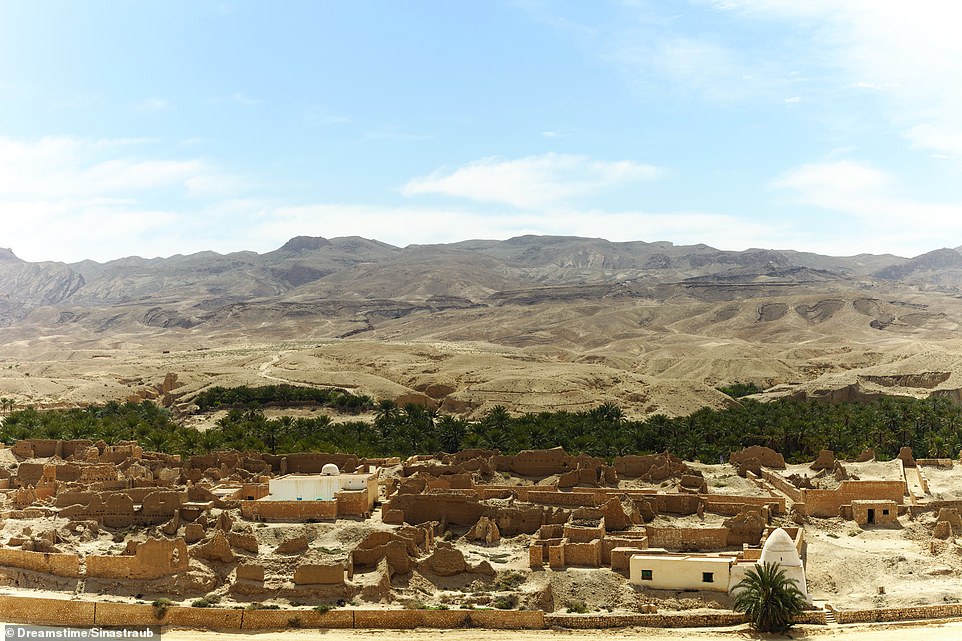 Surrounded by the nearby mountains, the Tamerza oasis in Tunisia is a remarkably fertile patch of land in an otherwise parched landscape. Because of the oasis’ water supplies, courtesy of run-off from the mountains, a small town grew there. Ironically, the town was abandoned after heavy flooding destroyed many buildings during the 1960s 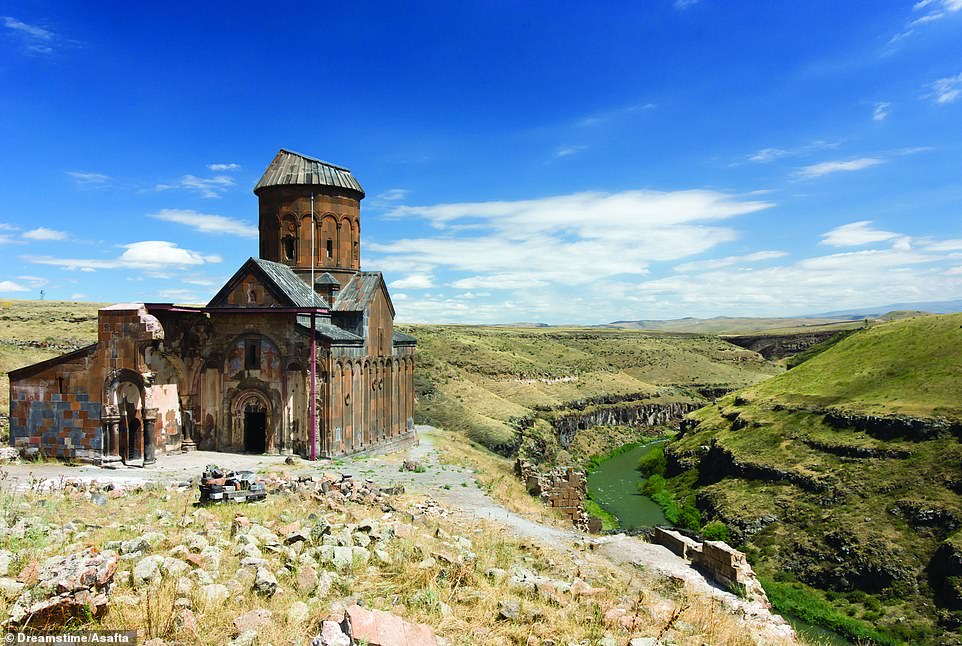 Few abandoned religious buildings carry the moody visual impact of the Church of St Gregory in Ani, Turkey. The church was built in the 13th century, in a position high above the Arpaçay gorge. The interior features impressive frescoes on two themes – the Life of Christ and the Life of St Gregory the Illuminator. Ani is a ruined Armenian city, now located in the Turkish province of Kars. Founded in the fifth century, the city rose to become the capital of the Bagratid Armenian kingdom in the 10th and 11th centuries, before war and time reduced it to ruins by the 17th century 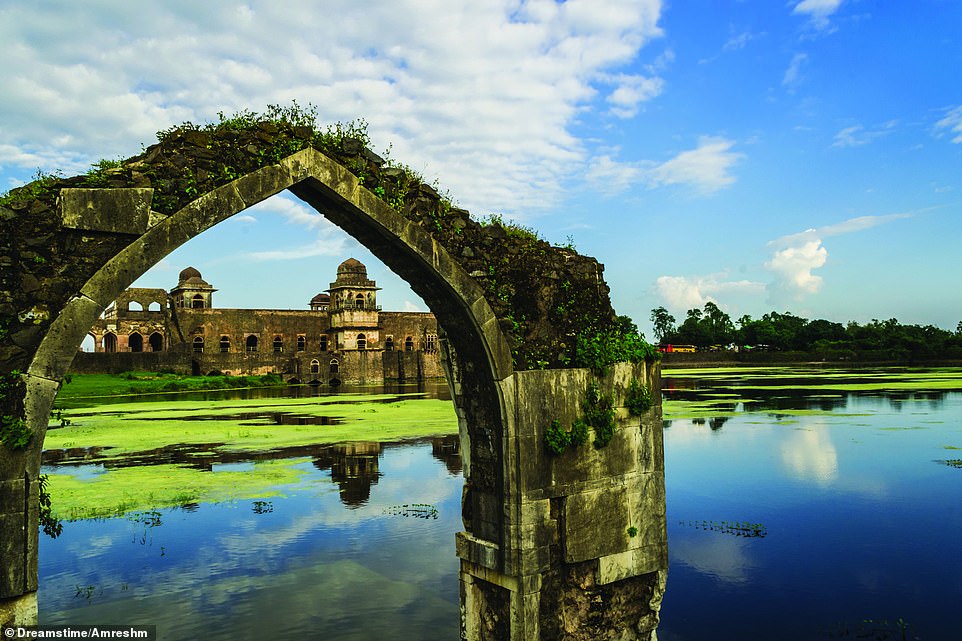 The Jahaz Mahal in Delhi, India, is a masterpiece of architecture and aquatic landscaping. Its name means ‘Ship Palace’, as the reflection of the palace in its man-made reservoir resembles the image of a ship at sea. The palace was constructed in the 15th and 16th centuries, originally as a place for travellers to stop, rest and be entertained 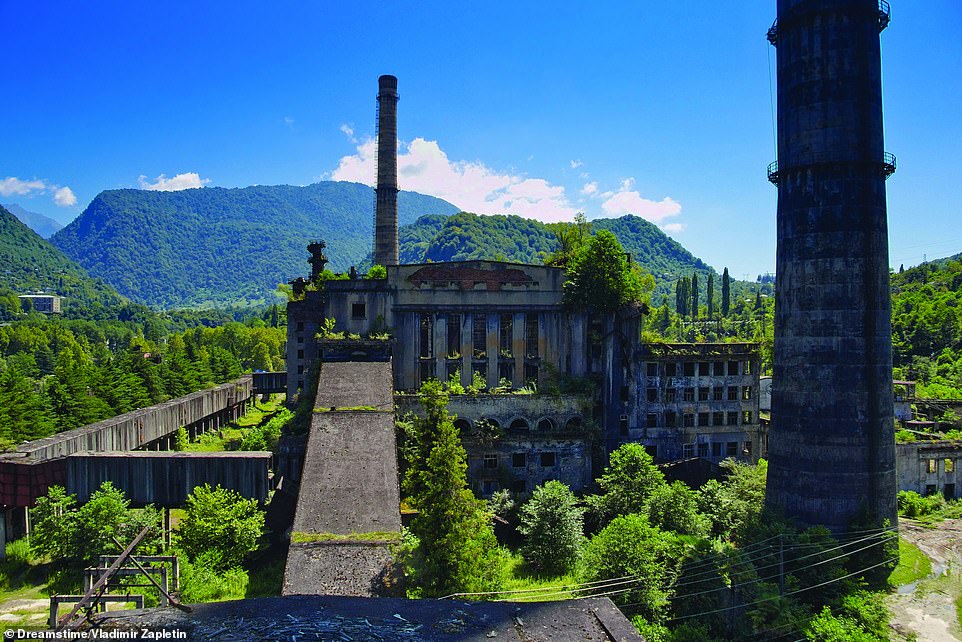 During the war in Abkhazia in the 1990s, Tkvarcheli was held under siege by Georgian forces. Although the city withstood the siege, it subsequently never recovered from the human and economic trauma, and fell into decline. From a population of nearly 22,000 in 1989, the city’s inhabitants dropped to just 5,000 by 2011. Large parts of the city and the surrounding districts lie uninhabited. Pictured are the rusting remains of Tkvarcheli thermal power plant, which was bombed in the first year of the siege, stripping the population of electricity for more than a year 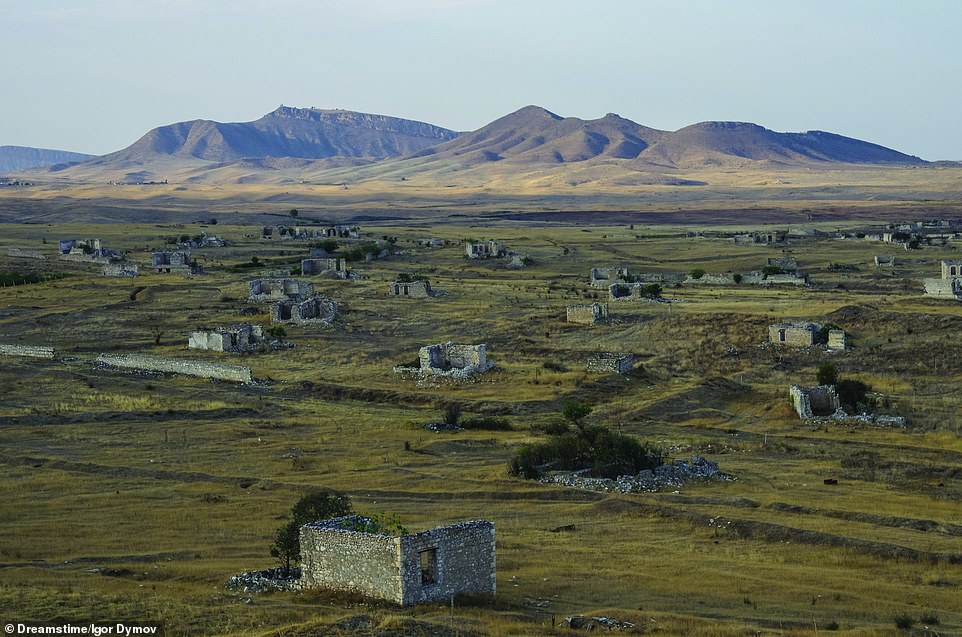 Looking at Agdam in Azerbaijan today, it is hard to imagine that in 1989 it was a thriving town of about 29,000 inhabitants. During the Nagorno-Karabakh War of 1991, it was captured by Armenian forces and subsequently destroyed. Looting and the stripping of houses for building materials forced out the last remaining residents 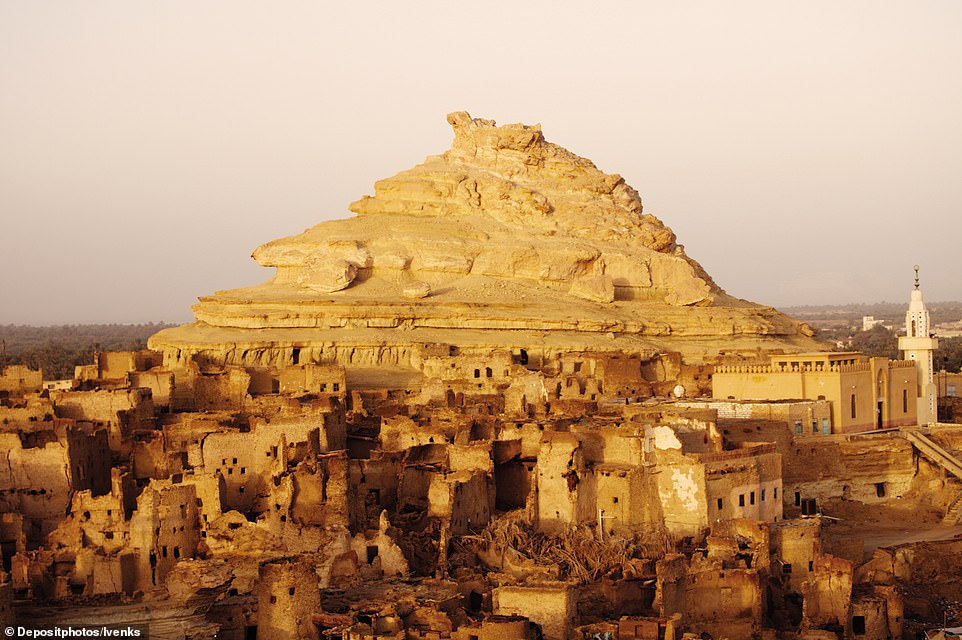 The Siwa Oasis sits in an isolated part of Egypt’s Western Desert, with a settlement there recorded as far back as the 10th century BCE. The crumbling Old Town is a remarkable and vanishing legacy of this history, still dominated by the organic shapes that constitute the remnants of the Fortress of Shali. The building material of the fortress buildings is kershif, a mixture of salt and mud-brick that has proved to be defenceless against rainfall – much of the city was destroyed by a massive downpour in 1926 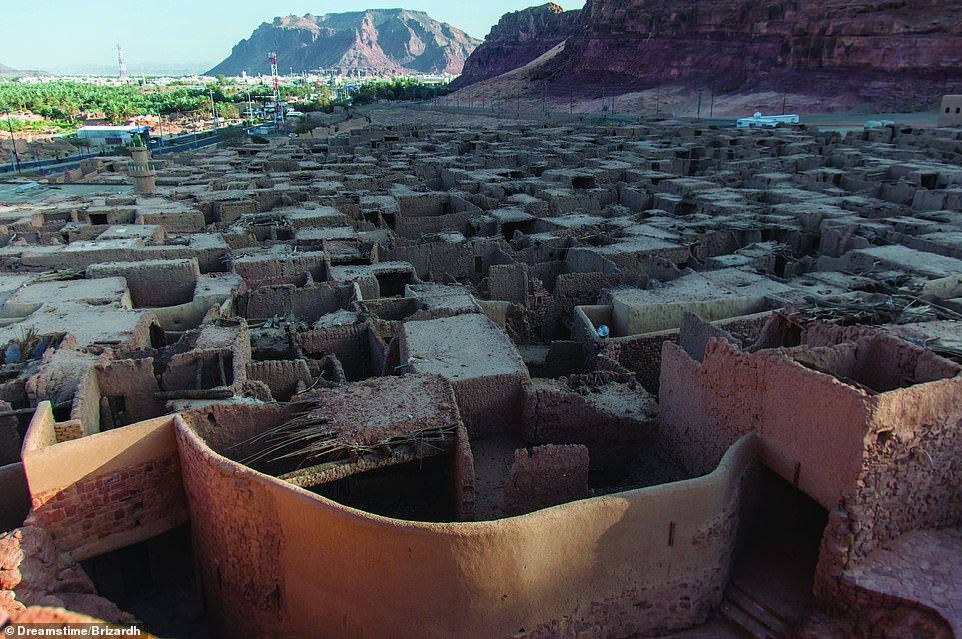 Al-Ula in Saudi Arabia is an astonishing spectacle even after the passage of more than 2,500 years. Established in the sixth century BCE, and extensively reconstructed in the 13th century CE, the walled city grew to encompass some 800 mud-brick and stone houses, huddled together in a bewildering maze of alleys, walls and small courtyards. The last of the inhabitants left in the 1980s 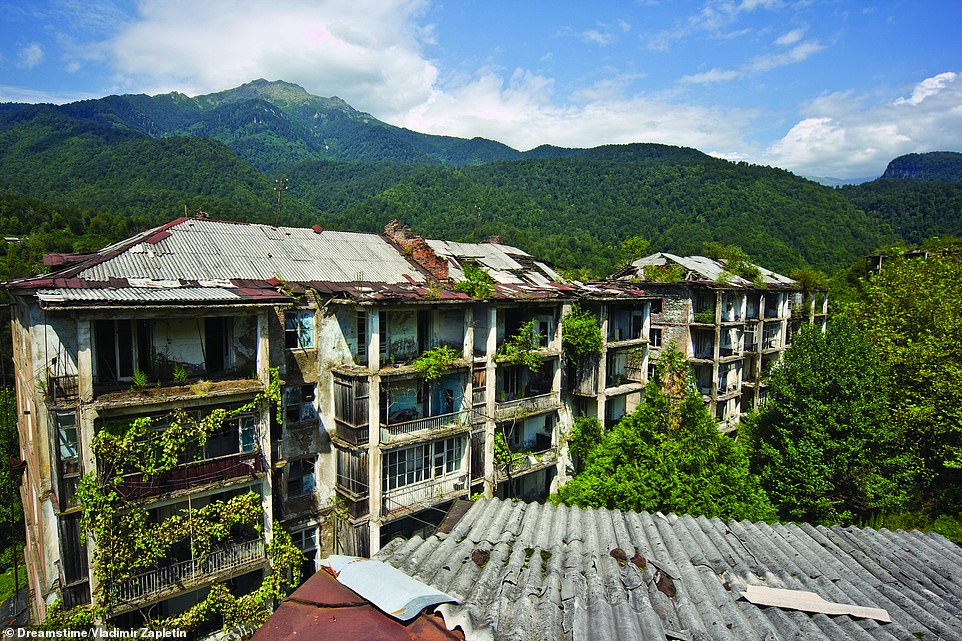 The settlement of Polyana in the republic of Abkhazia was formerly a mining community. The decline of that industry in the area, plus the destruction unleashed by war, has reduced the town to a haunted shadow of its former self. Many of Abkhazia’s ghost towns actually still have a handful of residents, scratching out an existence in ramshackle housing

Set high up in the San Juan Mountains, Animas Forks in Colorado was a 19th-century mining town, abandoned in the 1920s. The settlement’s name was originally Three Forks of the Animas, describing its location at the nearby meeting place of three rivers, one of them being the Animas. Many people left to escape the vicious winter conditions, especially once the mines had ceased to deliver a good profit 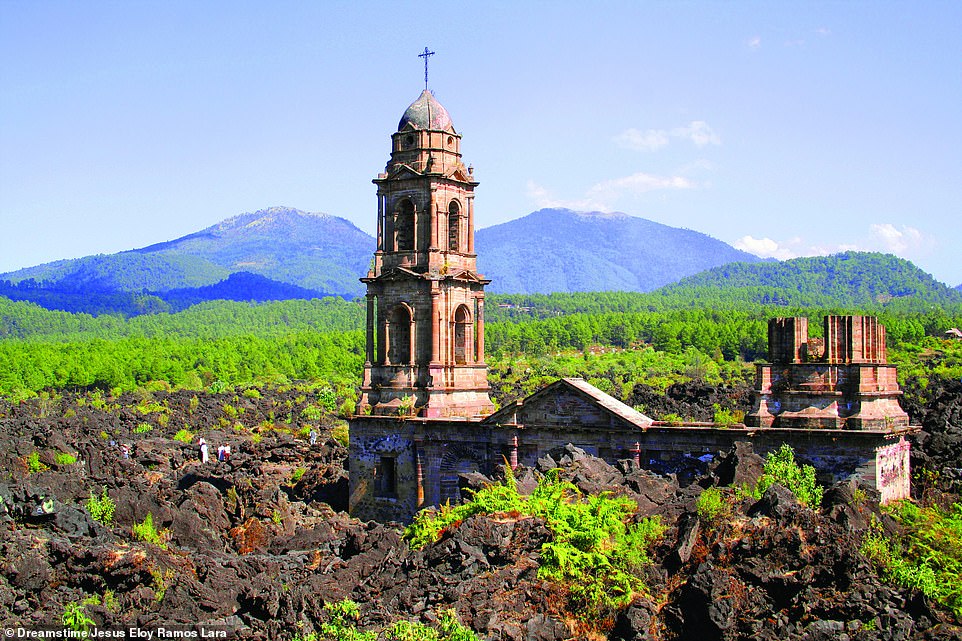 The volcanic deposits piled up around this architecturally defiant cathedral provide ample evidence for why San Juan Parangaricutiro in Mexico is abandoned. The nearby Parícutin volcano erupted in 1943, smothering the town with volcanic ash and lava 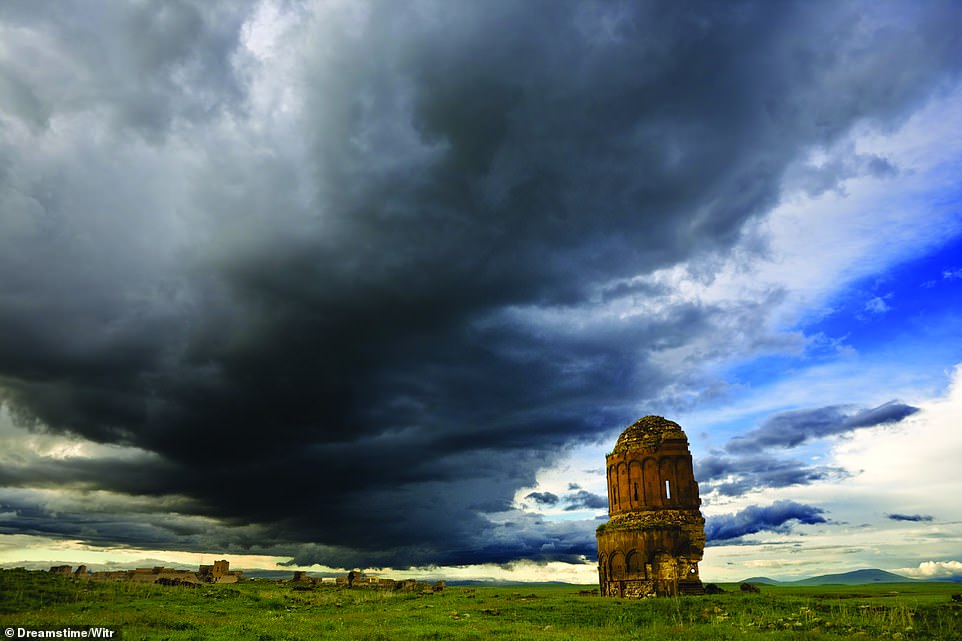 The Church of the Redeemer in Ani, Turkey, or least what remains of it after hundreds of years of decay and weathering. The church’s construction was completed in 1035, and it was restored at several points throughout its history before it was finally left to the elements in the mid-18th century (along with the rest of the city). The collapse of the entire eastern half of the church most likely dates to 1957. During that year local people remember a huge storm one night, accompanied by the sound of crashing masonry in the distance as the church’s neglected structure finally gave way 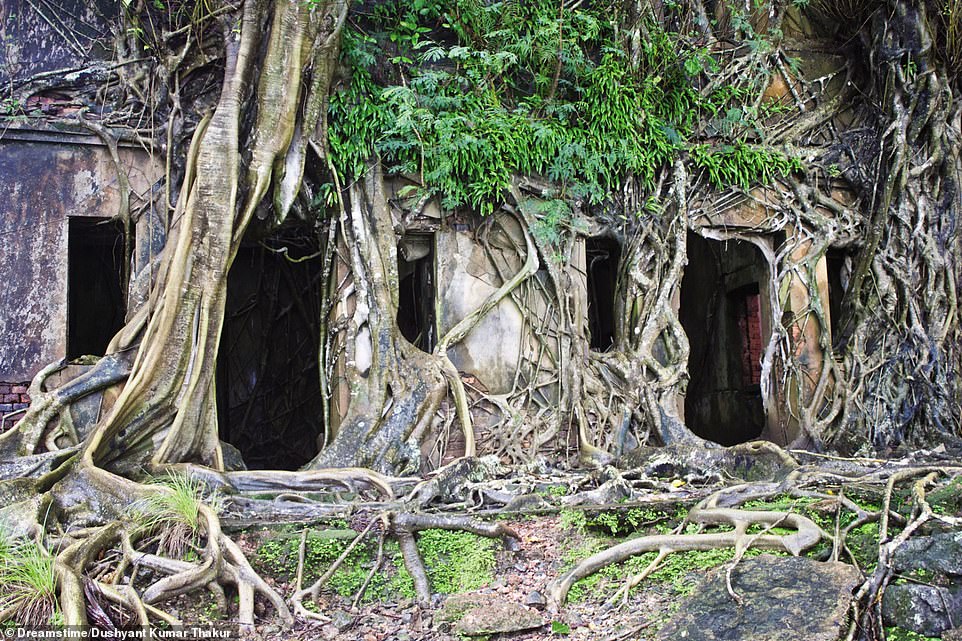 Nature progressively reclaimed this old abandoned Presbyterian church, with vines and tree roots swarming over foundations and walls. The church is located in Port Blair on Ross Island, part of the Andaman and Nicobar Islands in the Indian Ocean. A British settlement was established at Port Blair in the late 18th century, part of the spreading British colonization of the Indian subcontinent. Although in its heyday Port Blair sparkled with high-society lives, the islands also proved to be difficult outposts for the British over their 150-year occupation. Disease claimed many lives, and there was periodic violence between the colonists and the local inhabitants. From 1858 the island was also home to the Ross Island Penal Colony, a brutal establishment housing political prisoners from India 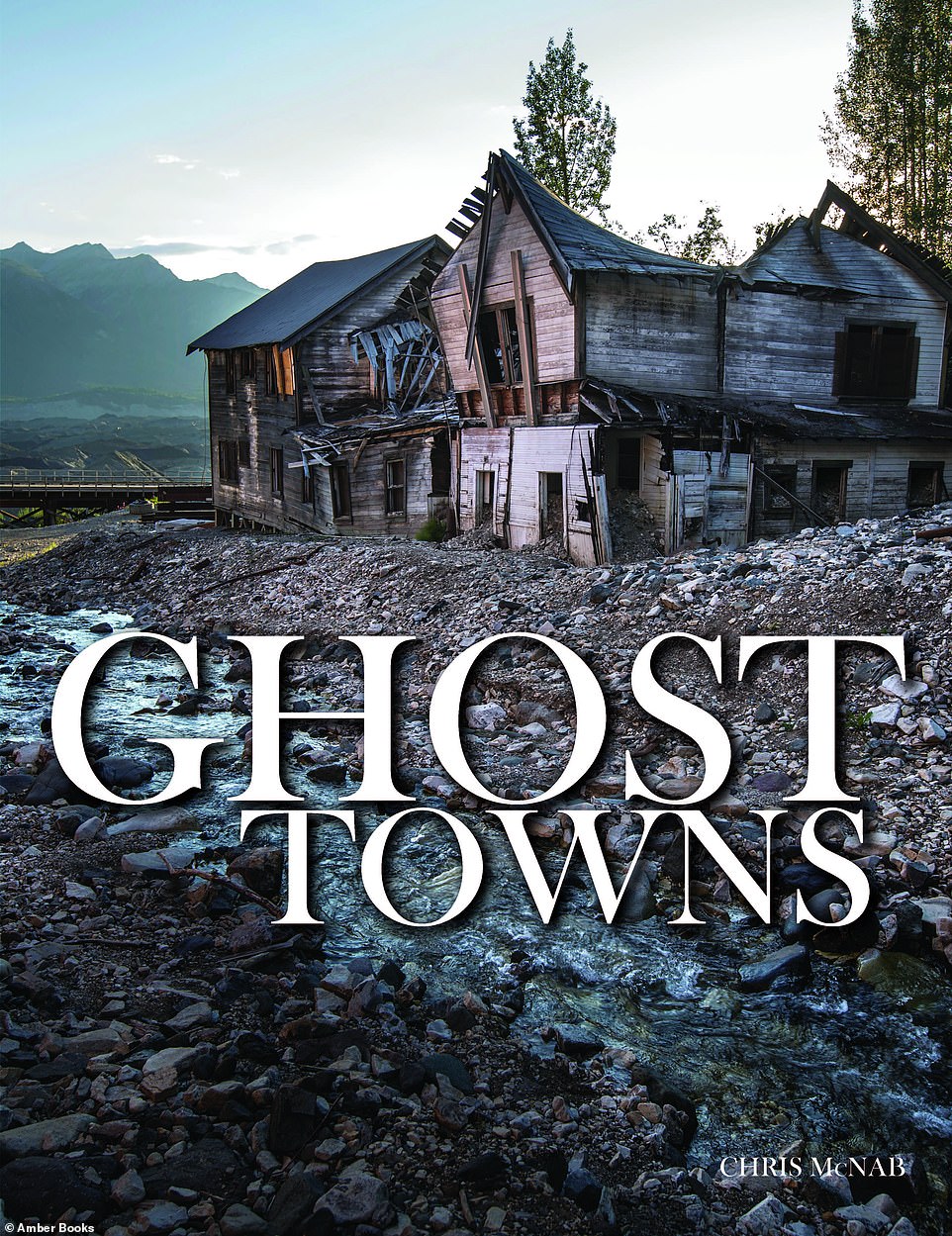 Yelp: 60% of small businesses were shut down are now closed forever

Struggling to book a staycation retreat? These firms could help

In a long distance relationship? New Kayak tool helps couples figure out where to meet in the middle