All the president’s den: Former home of Nelson Mandela is transformed into a nine-room boutique hotel with a restaurant that’s run by the chef who cooked for him for 20 years

Anti-apartheid legend Nelson Mandela liked hearty, simple meals, like oxtail stew. It was a favourite dish of South Africa’s first black president and now fills ravioli served in his former home, which has been transformed into a boutique hotel.

The inside of the building, hidden on a quiet street in a wealthy suburb of Johannesburg, had been defaced by squatters.

But after a floor-to-ceiling remodel, sunlight now floods in from generous skylights and bay windows. The white facade is all that remains of the original building. 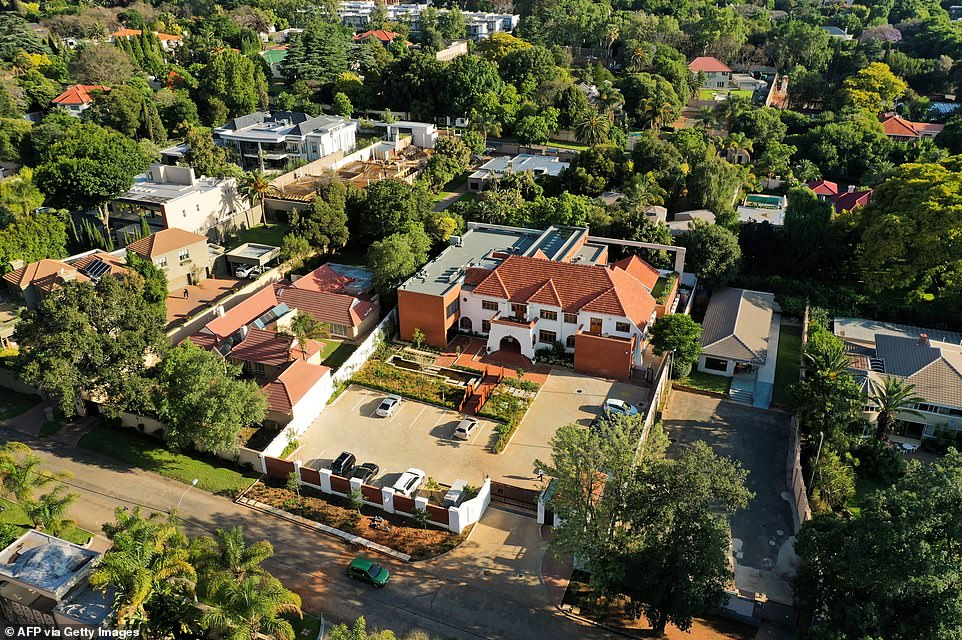 The nine-bedroom boutique hotel Sanctuary Mandela is located on a quiet street in a wealthy suburb of Johannesburg. Mandela lived in this building for eight years following his release from prison in 1990 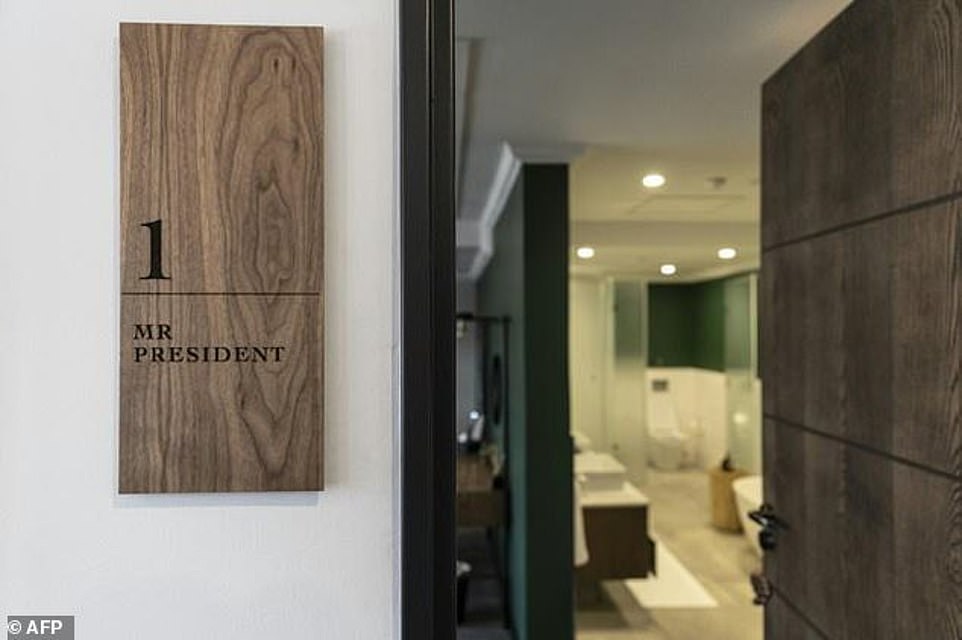 The Presidential Suite at Sanctuary Mandela was once the president’s actual bedroom, although the room has been remodelled and refurbished

Mandela lived there for eight years before moving to another home around the corner with his third wife Graca Machel. He arrived shortly after his release from prison in 1990, and promptly set about meeting the neighbours, general manager Dimitri Maritz said.

‘He went knocking on every door, to introduce himself and invite neighbours for canapes and cocktails,’ Maritz said.

‘A Chinese man shooed him away. When he realised he had shut the door in Mandela’s face, it is said that he moved not long after that,’ Maritz laughed, while noting the tale’s whiff of urban legend.

The hotel, named Sanctuary Mandela, opened in September for guests seeking to bask in the ex-president’s calm and positive energy. 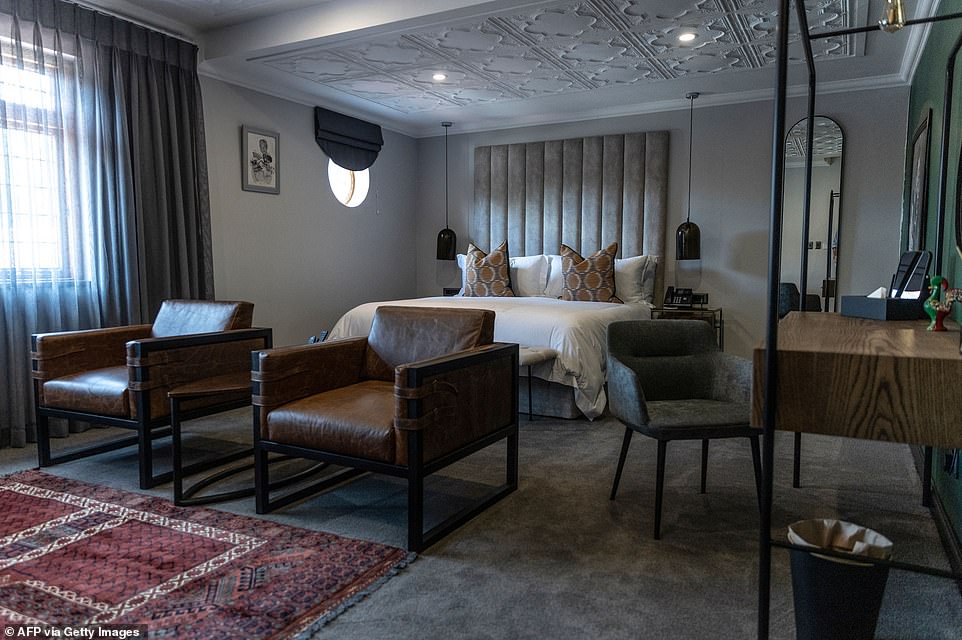 Pictured is the bedroom in The Presidential Suite at Sanctuary Mandela. The heads of guests do not rest where his did, though. After the building’s transformation, the bathroom is now where his bed once stood 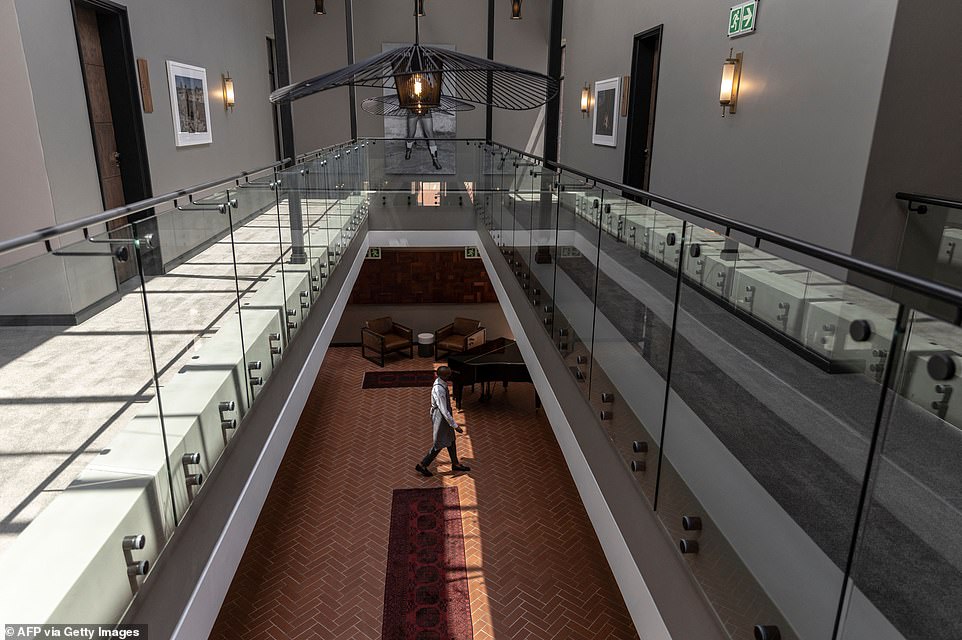 In this shot a staff member at Sanctuary Mandela hotel walks across the hallway. The walls of the hotel are adorned with images of the anti-apartheid icon

The presidential suite was once actually the president’s bedroom, though the heads of guests do not rest where his did. After the remodel, the bathroom is now where his bed once stood.

The window frames bear his nickname ‘Madiba’ and his Robben Island prison number ‘466/64’ – scratched into the wood by his grandson.

After Mandela’s release at age 71, he yearned for the simple pleasures he had been denied during 27 years in prison: playtime with his grandchildren, the scent of a rose, a sip of his favourite sweet Constantia wine. 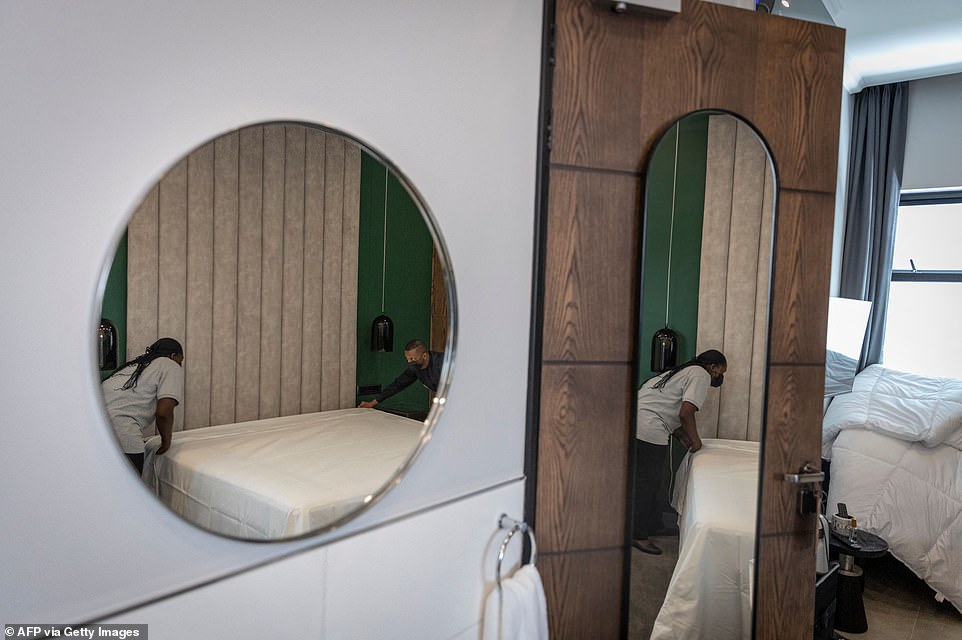 In this shot, hotel staff members make up one of the nine bedrooms. Some of the rooms bear the nicknames Madiba and Tata, which South Africans fondly used for Mandela

‘He was not a fussy person,’ said chef Xoliswa Ndoyiya, who served Mandela’s meals for two decades.

She now heads the kitchen of the hotel’s restaurant, where every dish is inspired by his tastes.

‘He did not want to see an oily plate. He didn’t have a sweet tongue. Fruit he would eat all the time, throughout the day,’ she recalled.

‘He was more a father than a boss. He made you feel comfortable, like you were part of his family.’ 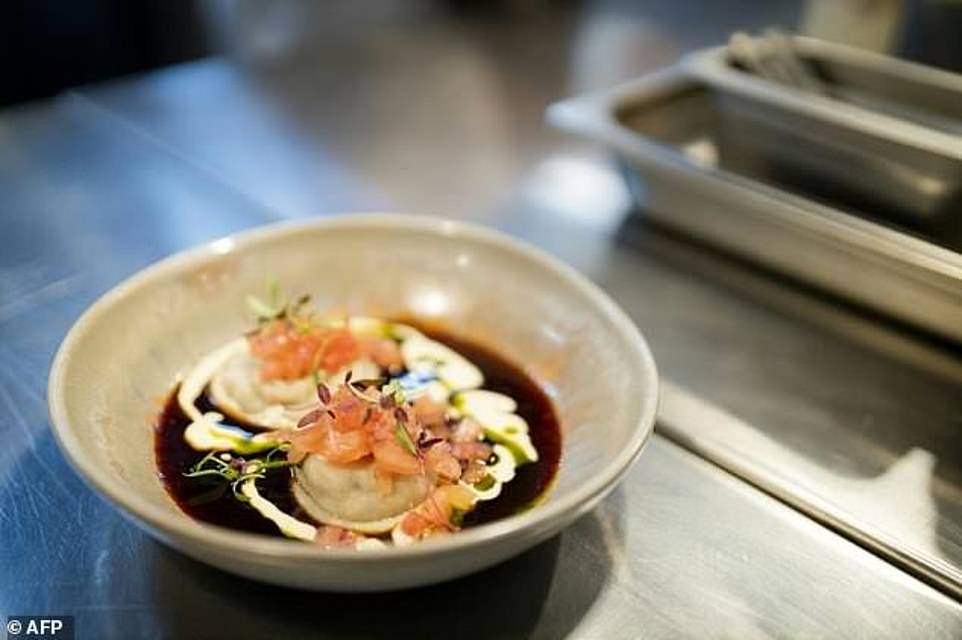 The dishes on the menu in the hotel’s restaurant have been inspired by the food that Mandela loved to eat, such as oxtail stew ravioli 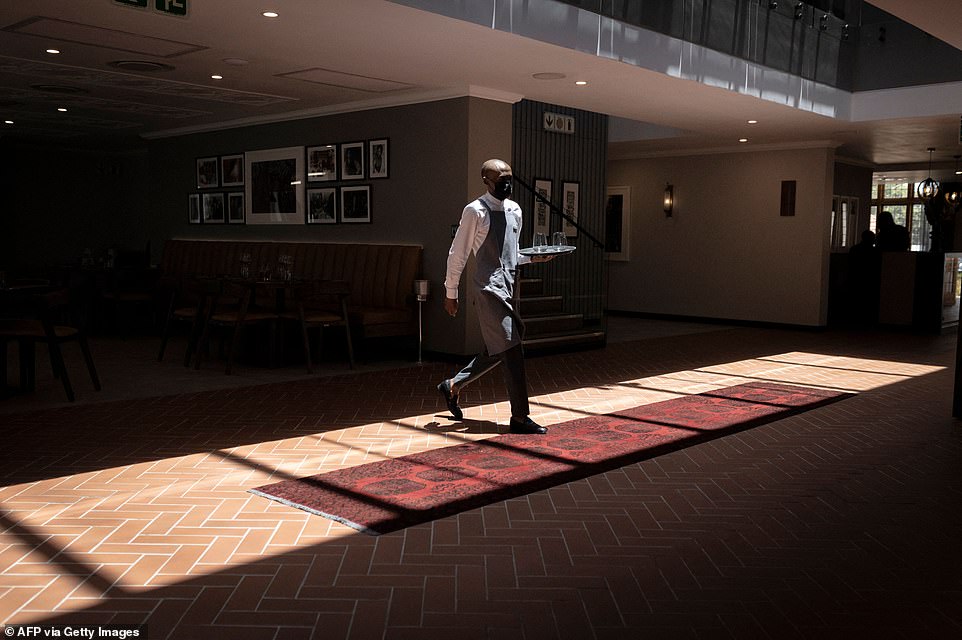 The photos on the walls include shots of Mandela playing peek-a-boo with a baby, dressed to the nines as a young lawyer and standing with outstretched arms to read a newspaper

Like Mandela, Ndoyiya is ethnic Xhosa, giving her a shared food sensibility.

If she tried to impress Mandela’s high-profile guests with food that he didn’t fancy, she said he would say, ‘Why are you not feeding me well?’

She added: ‘I would feel guilty for trying to please the guests instead of my boss.

‘He liked to eat his chicken with his fingers, cleaning the meat to the bone.

‘With him, you must be humble. He taught us that people will know you for who you are. I miss him, very, very much.’ 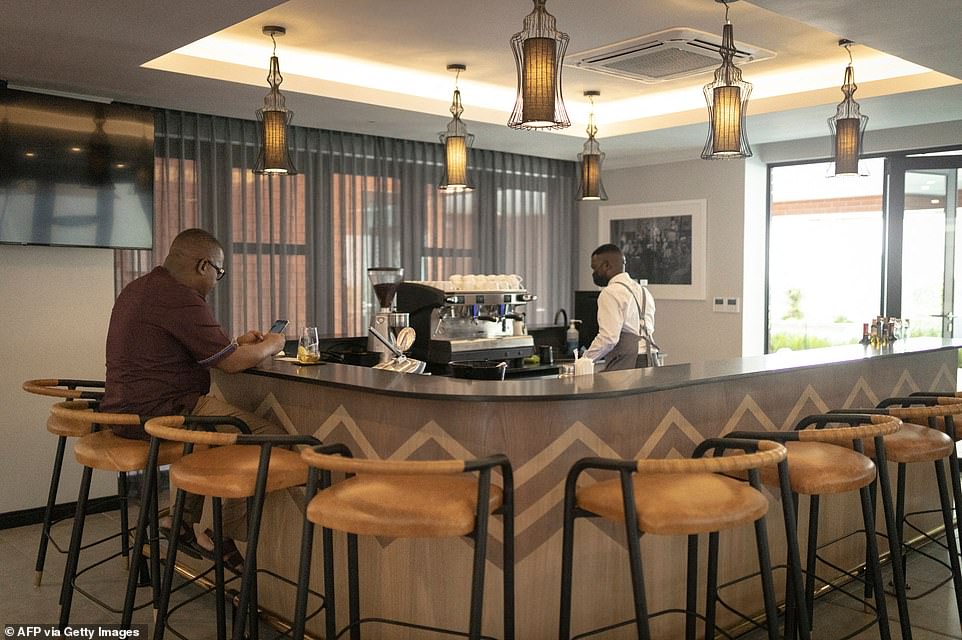 A client enjoys a drink at the bar in Sanctuary Mandela hotel. One of Mandela’s favourite drinks is said to have been sweet Constantia wine 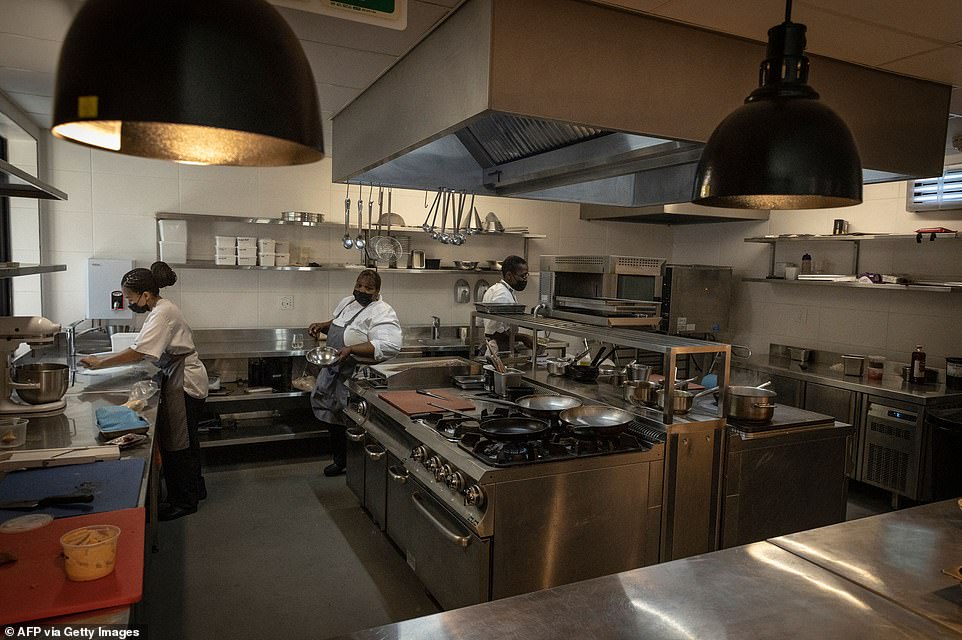 In this image Nelson Mandela’s former personal chef Xoliswa Ndoyiya busies herself in the hotel kitchen. Mandela ‘liked to eat his chicken with his fingers, cleaning the meat to the bone’, she remembers 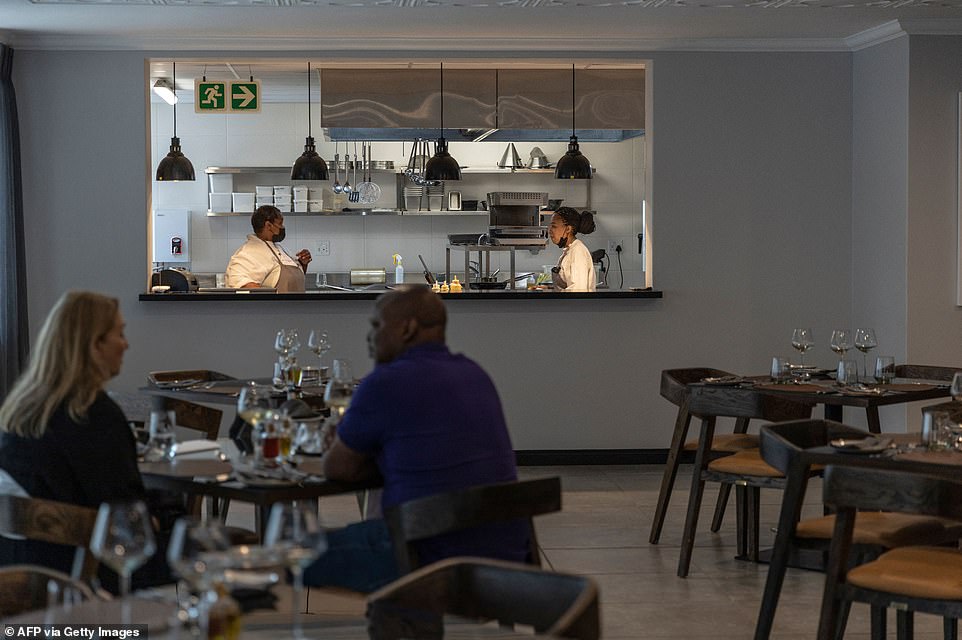 Pictured is the restaurant at Sanctuary Mandela. Mandela’s former personal chef said: ‘He did not want to see an oily plate, he didn’t have a sweet tongue. Fruit he would eat all the time, throughout the day’ 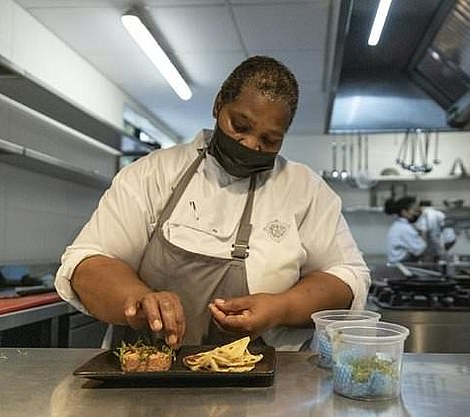 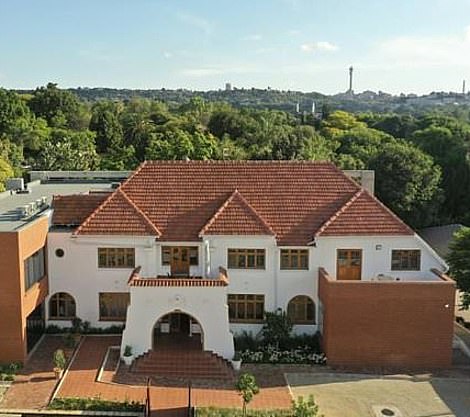 Nelson Mandela’s personal chef Xoliswa Ndoyiya prepares a dish at the hotel restaurant. Ndoyiya prepared food for Mandela for 20 years and said ‘he was not a fussy person’. On the right is the facade of Sanctuary Mandela. It is hoped that the hotel will appeal to guests who want to ‘bask in the ex-president’s calm and positive energy’

For as much as the building has been remodelled, the management wants it to feel like a home.

Images of Mandela on the walls show him playing peek-a-boo with a baby, dressed to the nines as a young lawyer, and standing with outstretched arms to read a newspaper.

Rooms bear the nicknames, Madiba and Tata, that South Africans fondly used for him.

‘It is not supposed to be a museum,’ Maritz said. ‘We wish to maintain a legacy, but it needs to be self-sustaining, it needs to stay alive.’

The goal of financial sustainability is a key difference from other sites that memorialise the struggle against apartheid.

Here, the assumption is that people are coming for the peace and tranquility that the home offers. Which doesn’t mean that they won’t talk about Mandela.

‘We have so many stories,’ Maritz said. ‘But we only tell these stories if we are asked.’

‘At first you come for Madiba, the second time for the place itself,’ he added, hoping that the new venture will embody Mandela’s qualities: ‘Humility and elegance.’

BA most likely to leave passengers disappointed when they complain

London for less with Corinthia Hotels

Circa reveals its dining lineup