What does it mean to be British today? Maybe these photographs hold the answer.

From sunbathing on the Blackpool beach in the summer to enjoying a cup of tea in a cafe in Bradford, these fascinating images show the diversity and uniqueness of life in Britain’s towns and cities. They are all shortlisted entries for the MyTown competition, the biggest outdoor exhibition of street photography in the UK.

The shortlist, made up from entries across the UK, features the glorious British summer, with scorched skin, seagulls and seafronts. There are also moments of party and pity, culture and colour, love and loss, sitting alongside the juxtaposed lives of society in modern Britain.

The competition, now in its second year, received 2,100 entries that were whittled down from a shortlist of 12 by judges Dougie Wallace, Linda Wisdom and Ronya Galka, who are all world renowned street photographers.

Returning judge Dougie Wallace said: ‘It was difficult to narrow down the entries to the shortlist – each provoked discussion and debate about what it means to be British today.’ Judge Linda Wisdom said: ‘We avoided all of the British clichés, but a number of themes kept coming through – a certain unique aesthetic runs through all of the entries. The shortlisted 12 should be exceptionally proud.’

A selection of the entries will be showcased across Clear Channel’s national network of over 3,000 screens and also displayed at a pop-up exhibition at Carousel: Next Door in central London, on December 5, where the winner will be announced. Scroll down to see the 12 shortlisted images… 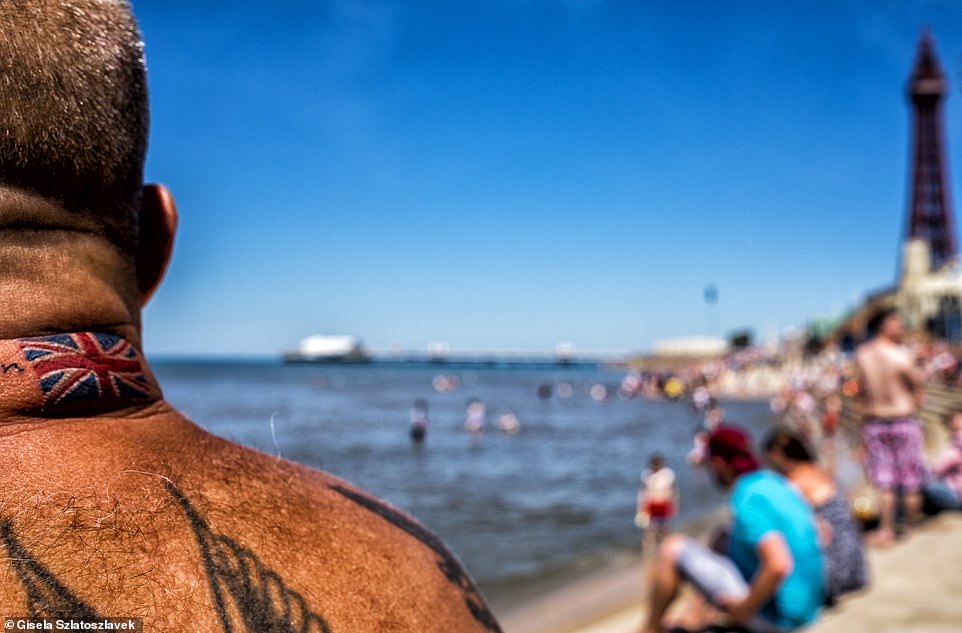 Photographer Gisela Szlatoszlavek captured this image during a sunny day on Blackpool beach, which she called Blackpool in Union 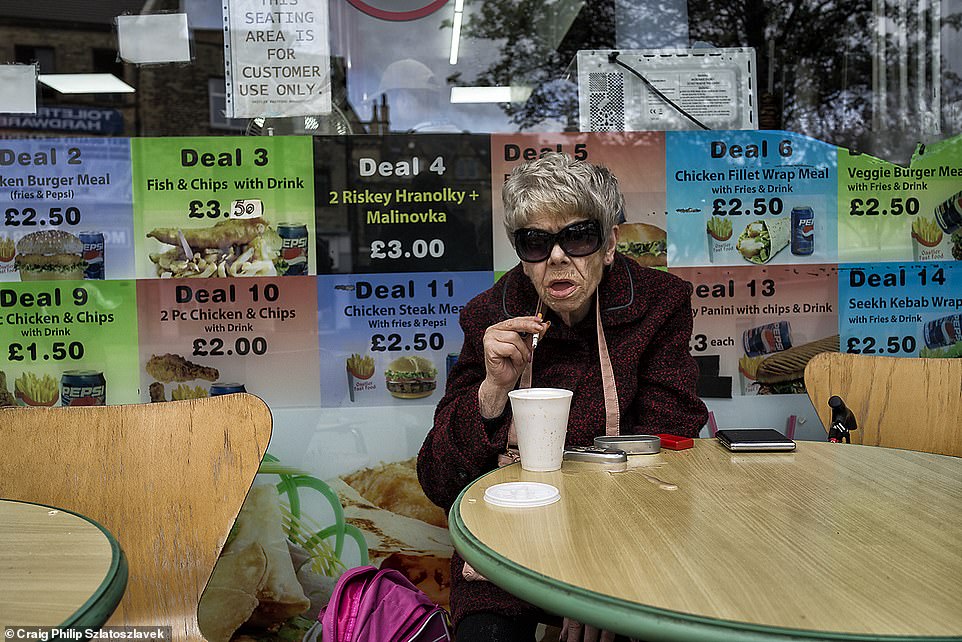 A woman enjoys a cigarette and a hot drink in a cafe in Bradford, West Yorkshire, in a snap taken by Craig Philip Szlatoszlavek. He called it, simply, Bradford Café 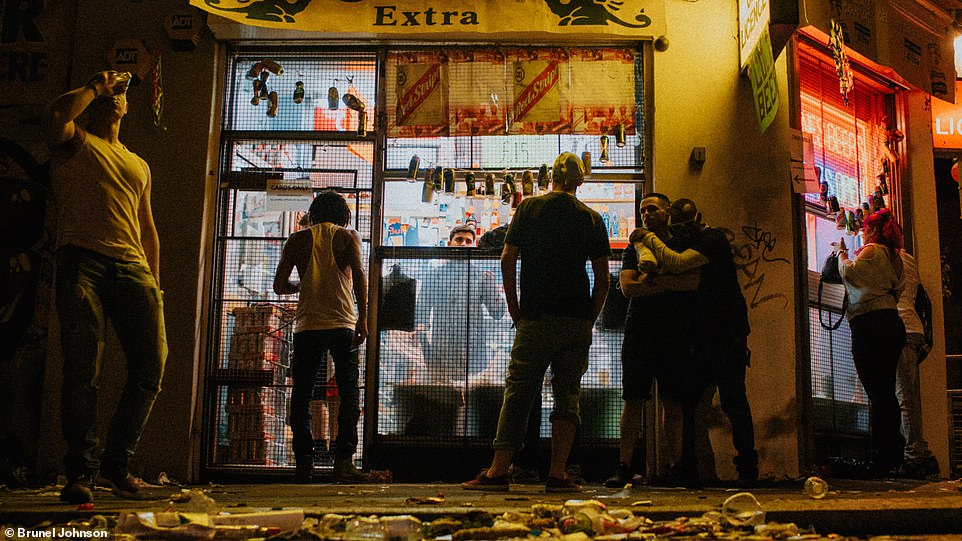 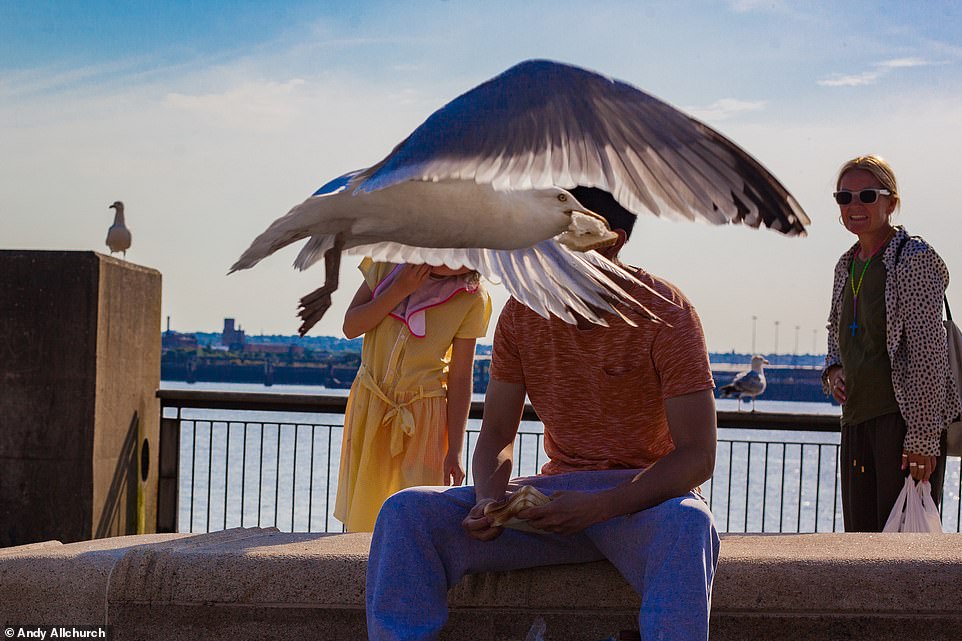 A seagull makes off with a chunk of bread supplied by a bread-wielding man on the Liverpool waterfront. It was taken by photographer Andy Allchurch, who called the image Don’t Feed The Birds 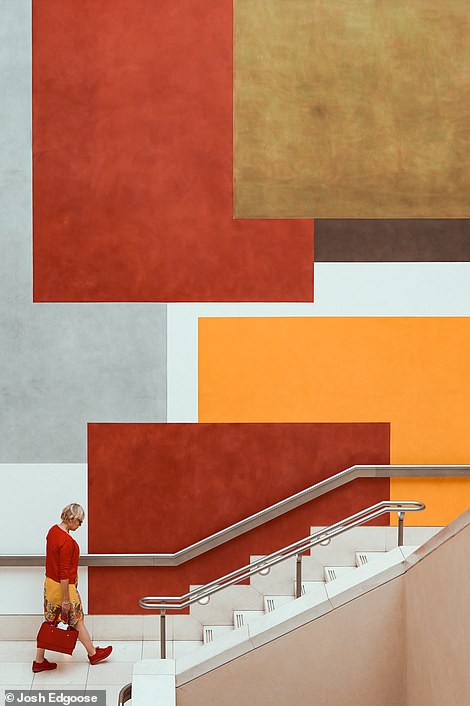 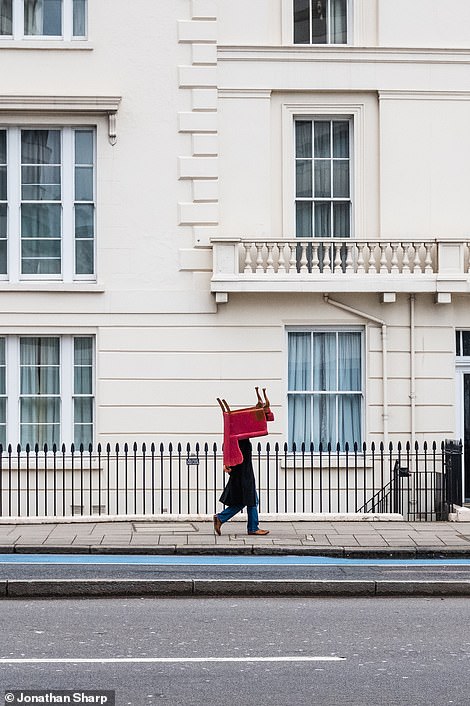 Photographer Josh Edgoose captured a humourous image of a woman’s clothes matching the art at the Tate Britain Gallery in London, left. Pictured right is a man carrying a red chair down a street in London in an image shot by Johnathan Sharp 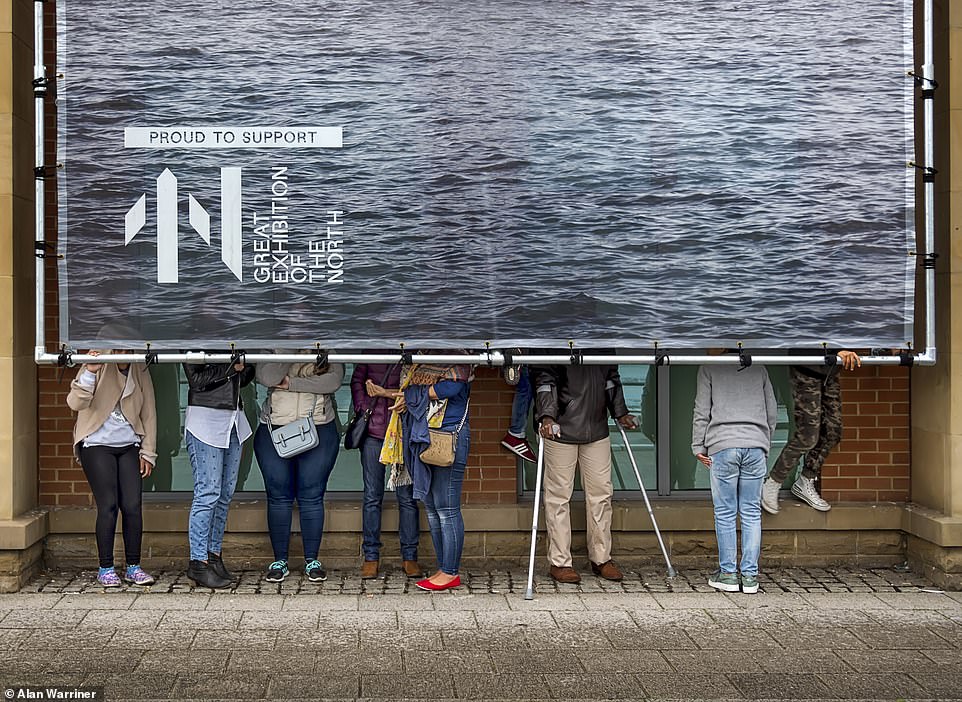 Photographer Alan Warriner captured this unusual image as people sheltered from the rain while waiting for a bus in Newcastle. He called the picture Support 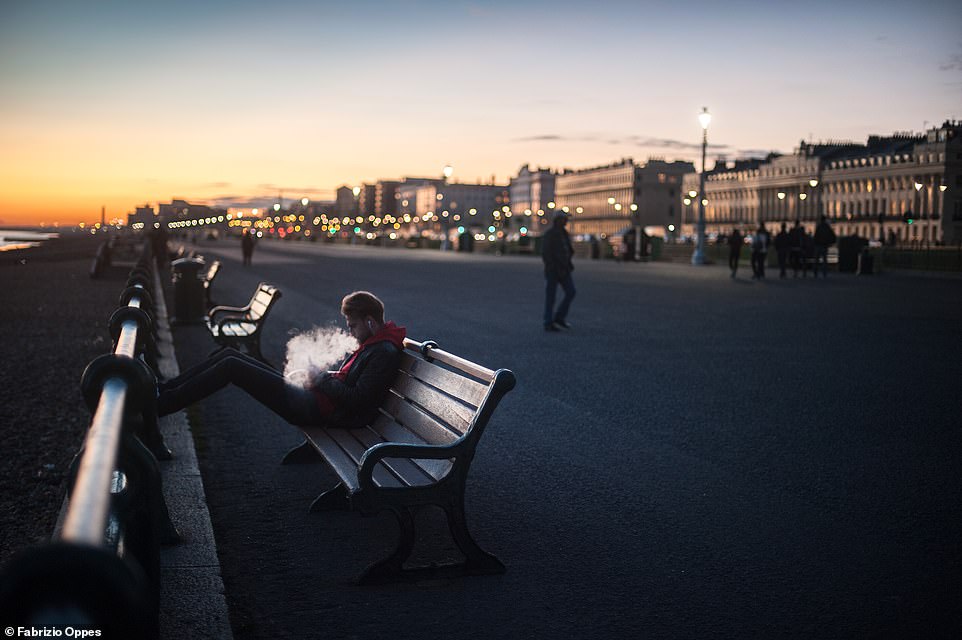 The Hove promenade twinkles in the background as a man sits on a bench while enjoying a cigarette and looking at his phone. The picture was snapped by Fabrizio Oppes, who called it My Seafront 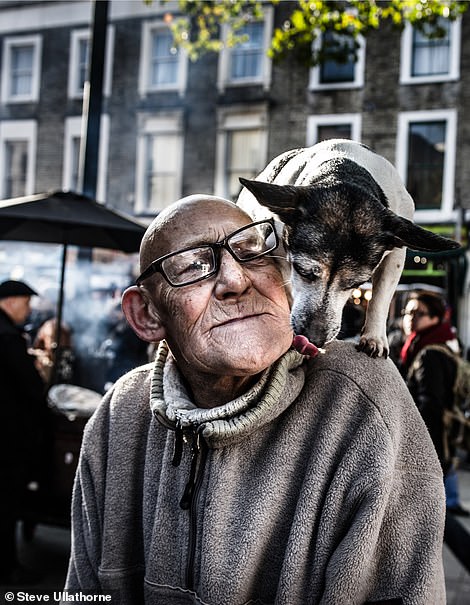 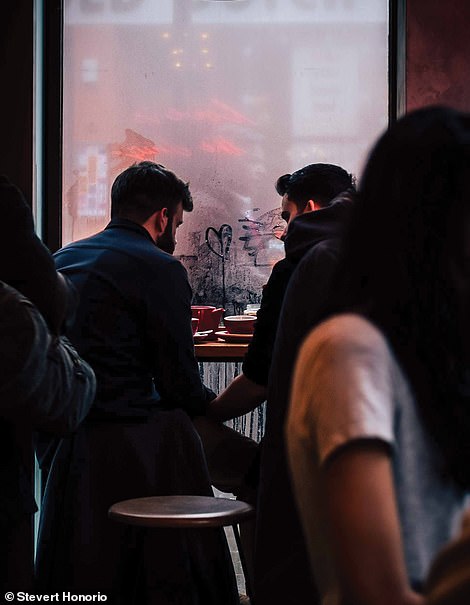 Photographer Steve Ullathorne took a charming image on Portobello Road in London of a man called Ron, with his dog Mitzi sitting on his shoulder, left. Pictured right is an image called The Break Up, taken by Stevert Honorio in London 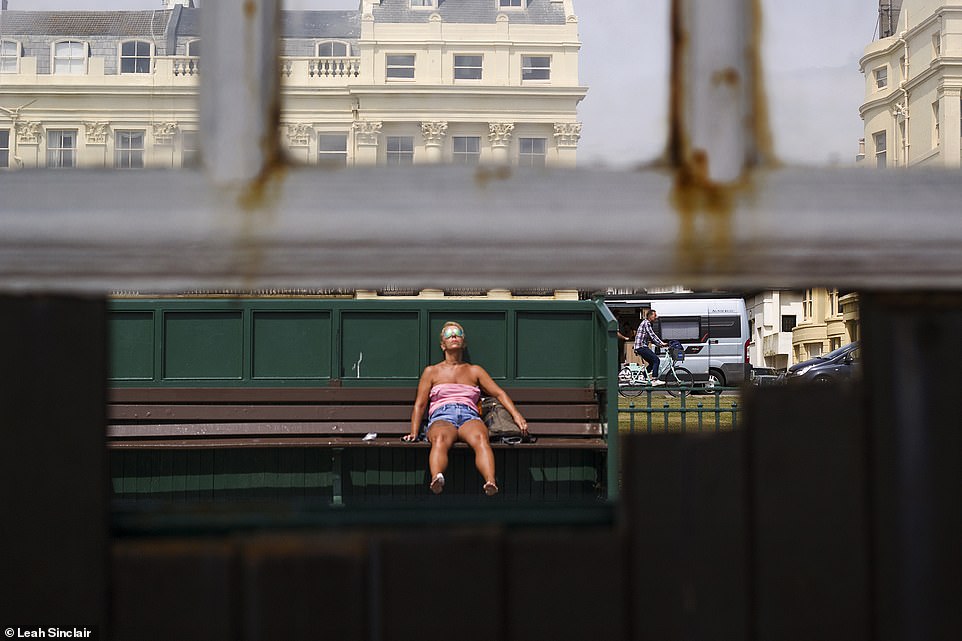 A woman suns herself on a bench in Brighton in a shot by photographer Leah Sinclair, who called the image Baking Hot 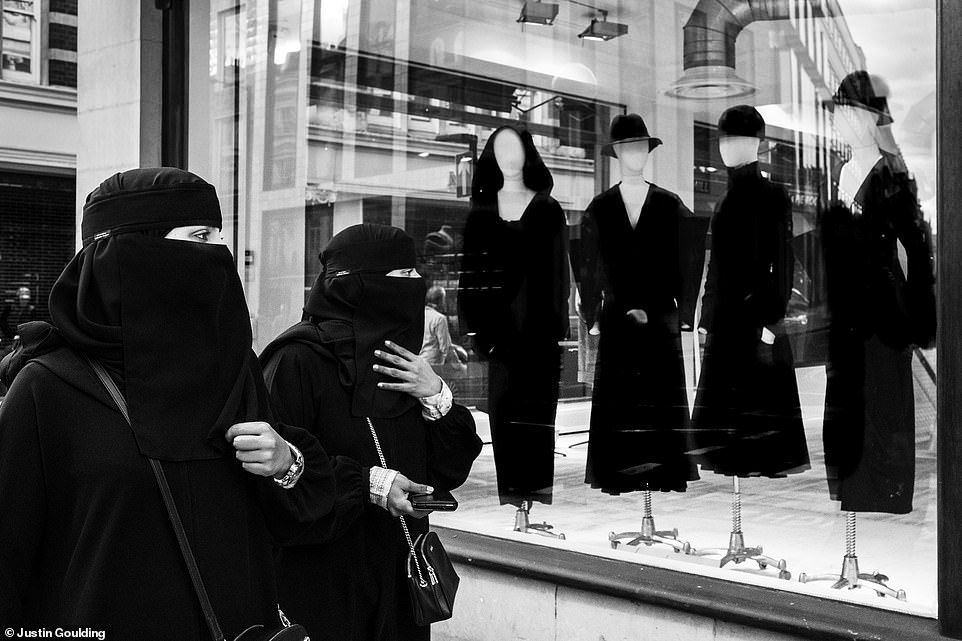 Photographer Justin Goulding called this shot Faces. He took it on a busy London shopping street

Cruise lines put culinary sailings back on the menu