A fascinating new series of maps and a mesmerising animation reveal Sydney’s eye-popping transformation over 250 years from a swathe of virgin land to a vibrant city with a population of over five million.

The illustrations were commissioned by Budget Direct Travel Insurance and created using maps from the National Library of Australia and other historical sources. The series begins with illustrations based on 18th-century drawings from a Captain James Cook expedition and by a deported coat thief from London and goes on, using modern topographical surveys, to show today’s thriving, picture-postcard metropolis.

Scroll down for a time-travel tour… 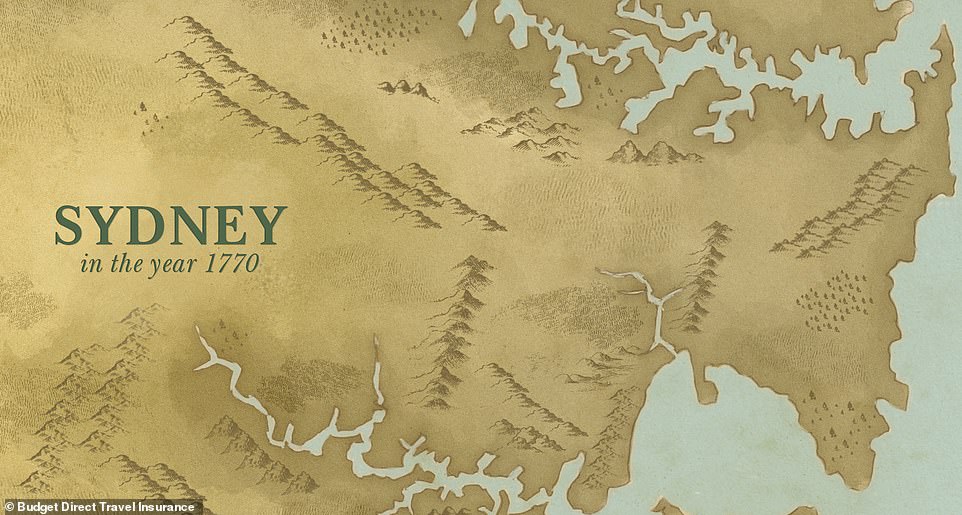 Back in 1770 there was no Sydney. This illustration is based on a map drawn by a member of Captain James Cook’s expedition

This map was based on one drawn by naval officer Richard Pickersgill, who was part of the HM Bark Endeavour expedition led by Yorkshireman Captain James Cook.

They were among the first European explorers to land in Australia and the first to chart its eastern coast. Cook called the area depicted in this map Stingray Bay, due to the presence of stingrays, until the discovery of new plants in the region prompted a name change to Botany Bay. 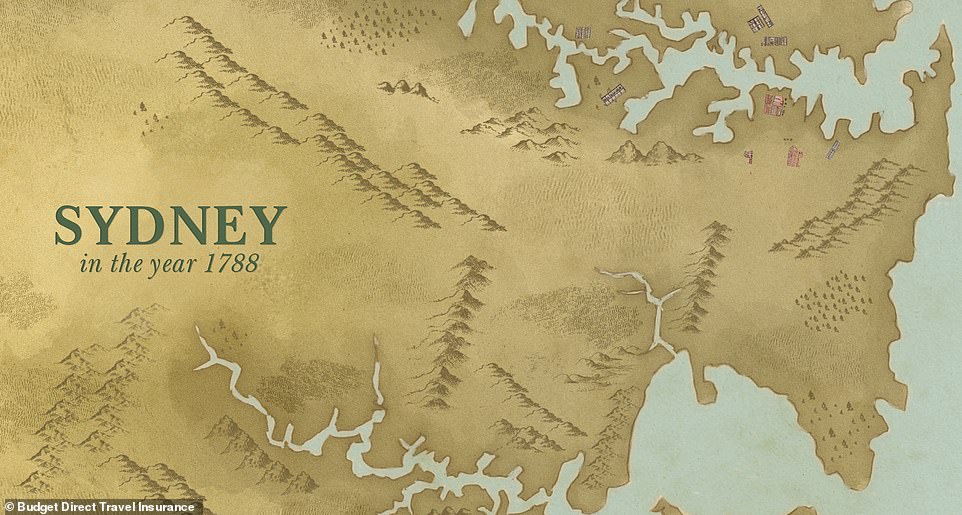 Eleven ships arrived in Sydney carrying prisoners in 1788, with camps for men and women built at ‘Sydney Cove’

By 1788 a penal colony had been built, according to this map based on a sketch credited to Francis Fowkes, a British convict exiled to Australia for stealing a coat and a pair of boots from a pub in London.

Eleven ships arrived in Sydney carrying prisoners that year, with camps for men and women built at Sydney Cove, a small bay on the southern shore of what is now Sydney Harbour, along with a governor’s mansion and farm. 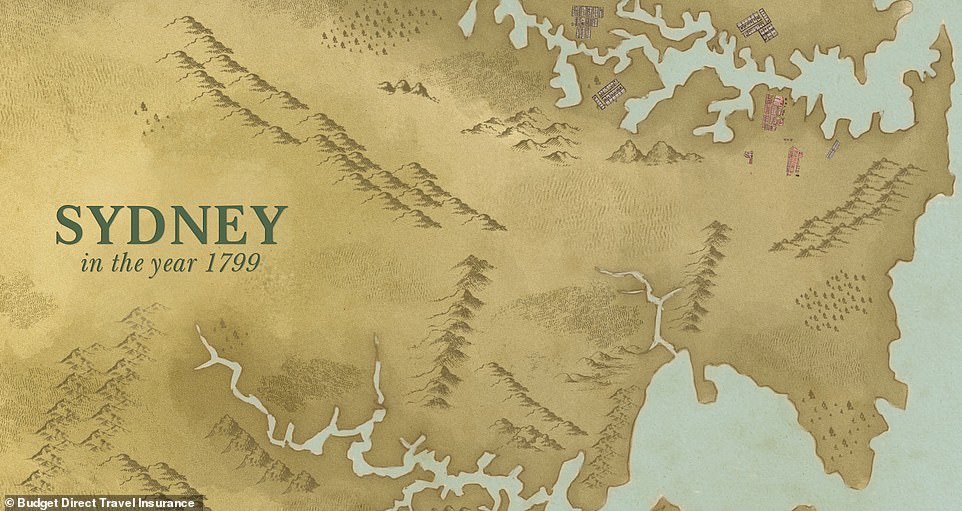 By 1799 a new Government house had been constructed, along with several roads

The penal settlement built in the 1780s continued to expand, as this map shows. It is based on a topographical plan by Charles Grimes and Matthew Flinders, cartographers and explorers working under the direction of Scottish soldier Lieutenant-Colonel William Paterson. 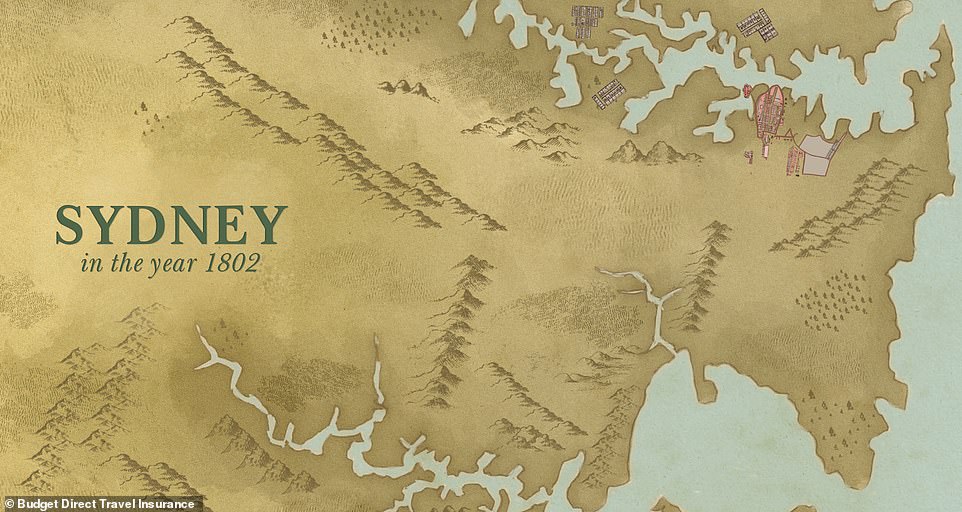 This depiction of the landscape in 1802 is based on one drawn during a Napoleon-approved Institut de France scientific expedition using the ship Geographe. Its mission was to observe the geography and natural history of New Holland, the historical European name for mainland Australia.

New features at this time included a permanent cemetery, where Sydney Town Hall stands today, and a prison in an area that is now home to the bustling Rocks neighbourhood. 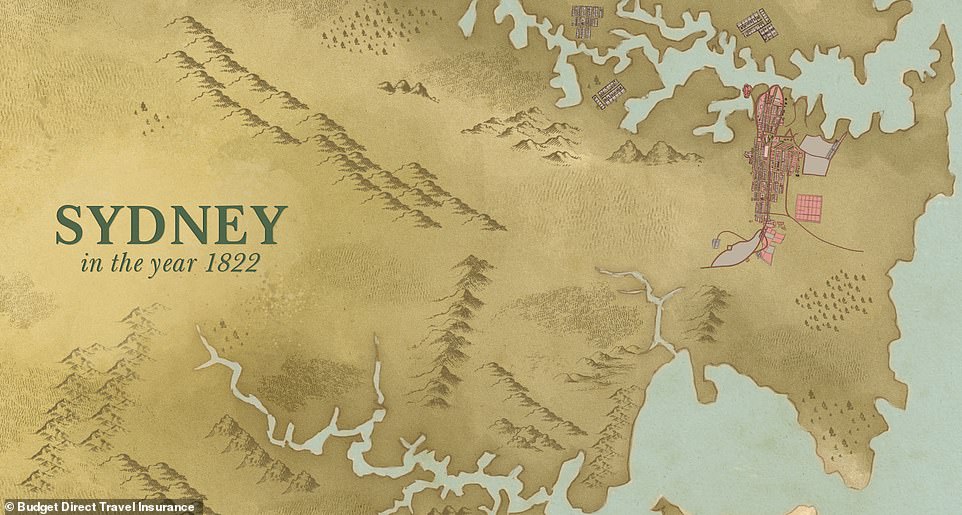 A town grid had been developed by now, with many of the streets retaining their names today

Sydney was taking shape by 1822, as this map shows. It’s based on one that was thought to have been commissioned by the Governor at the time, Thomas Brisbane.

A town grid had been developed by now, with many of the streets, such as Castlereagh Street, Macquarie Street and Philip Street, retaining their names today. Other features that have endured to the present day include the Royal Botanic Gardens, which opened in 1816, and the first courthouse, which was built between 1820 and 1828, and now houses the Greenway Wing of the Supreme Court of New South Wales. 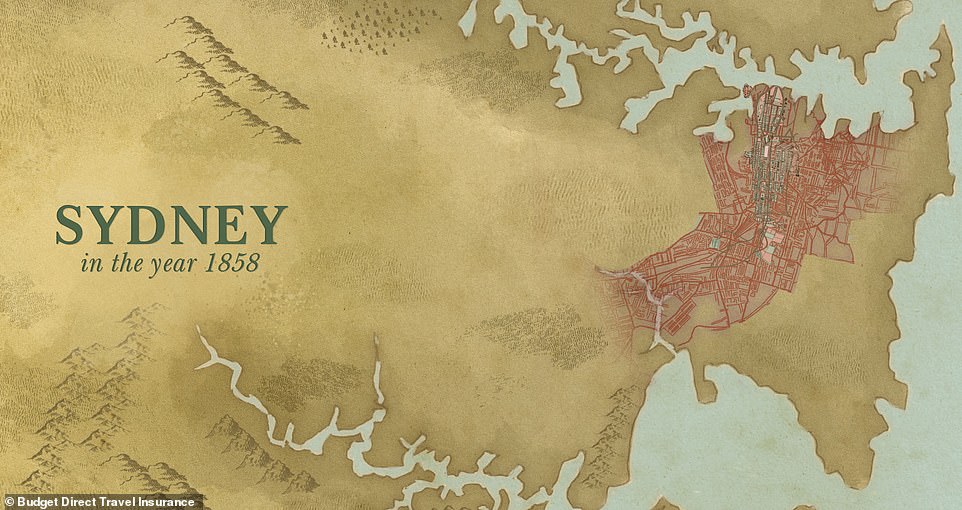 The University of Sydney opened its doors to students in 1850, while the Parramatta Railway opened in 1855

In 1858 a map of Sydney was released by publishers Sands and Kenny, along with a business directory of the city. It’s depicted here and shows how the metropolis had expanded considerably from 1822.

Several big businesses had cropped up, including the now-defunct Kent Brewery and the Australian Gas Light Co., which was founded in 1837 and went on to supply gas to Sydney street lights from 1841. The University of Sydney opened its doors to students in 1850, while the Parramatta Railway, extending roughly from the modern-day Central Station to the Stanmore railway stop, opened in 1855. 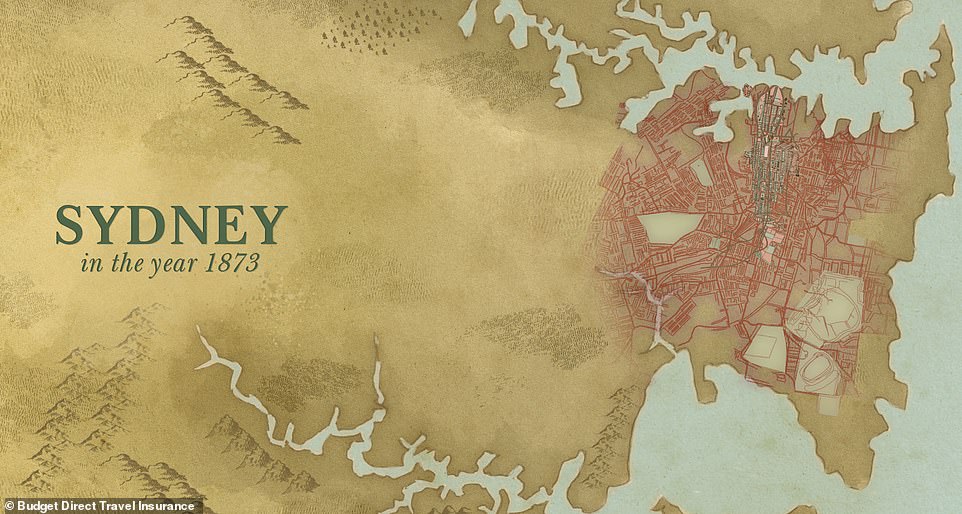 By now Cowper Wharf (now known as Finger Wharf) had appeared, along with the Sydney Observatory

The inspiration for this illustration was published as a supplement to Sydney Mail magazine in 1873 to show the growth and development of Sydney from 1802 to 1873.

There was a base layer based on an old map engraving dating to 1802 and an overlapping layer showing major features that had cropped up over the following 71 years, including Cowper Wharf (now known as Finger Wharf), which was built around 1870, the Sydney Observatory, which opened in 1858, and Belmore Park, which opened in 1868. 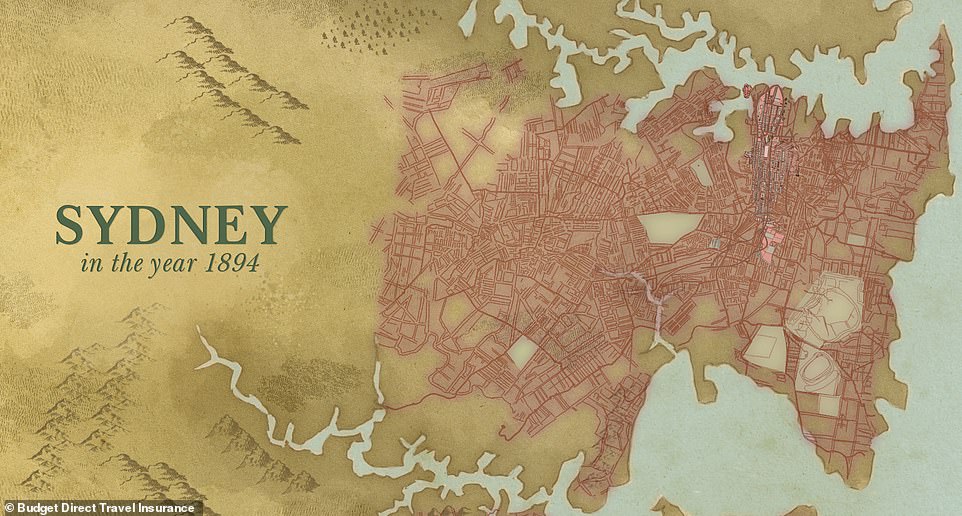 Features of note at this time included the aforementioned rail and tramway network, the Art Gallery of New South Wales, which had its first public exhibition in 1874, and still stands today, and the Strand Arcade retail centre, which also remains open after first welcoming shoppers in 1892. 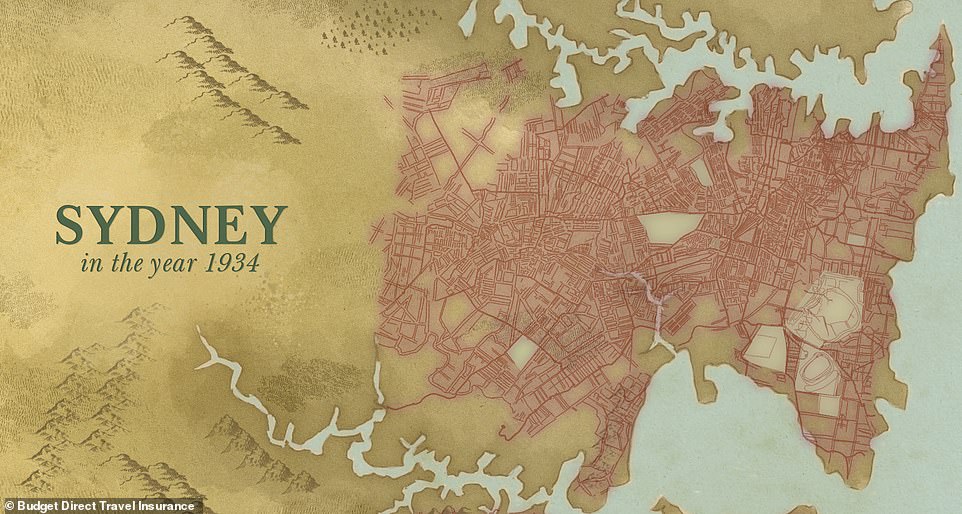 Several architectural landmarks had emerged in the city by this time, including the Sydney Harbour Bridge

In 1934 the first edition of Gregory’s Street Directory, which produced street maps of Sydney throughout the 20th century, was published and it was used as the basis for this illustration.

Several architectural landmarks had emerged in the city by this time, including the Sydney Harbour Bridge, which opened in 1932, the 14-storey Culwulla Chambers, completed in 1912 and officially Australia’s first skyscraper, and the cathedral-like Queen Victoria Building, which opened in 1898. All three remain attractions today. 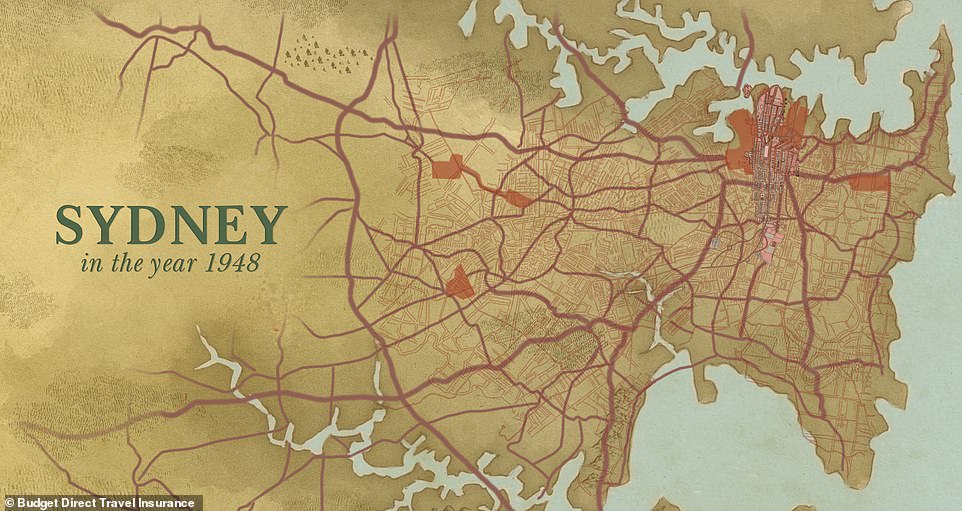 There was increasing urbanisation during this period, with the road and rail networks undergoing further development

The original 1948 map this illustration was based on was an attempt by Cumberland County Council to capture a comprehensive town plan for the Sydney metropolitan area.

There was increasing urbanisation during this period, with the road and rail networks undergoing further development. Some fun additions to the city included the Luna Park funfair, which opened in 1935, and the AWA Tower office and communications complex, which opened in 1939. At 15-storeys it was the tallest building in the city and its rooftop radio transmission tower remains an eye-catching sight. Both are now heritage-listed sites. 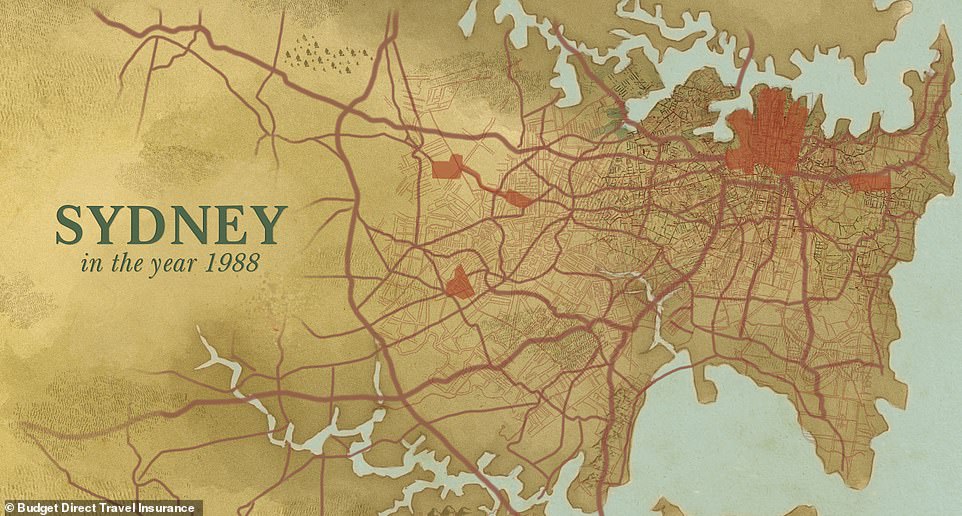 Catering to a growing population in the metropolitan area, the Eastern Suburbs Railway had opened in 1979. The buildings by this time, meanwhile, were decidedly loftier

In 1988, the same year celebrations were held to mark Australia’s 200th birthday, a map was commissioned of Sydney by a New South Wales government minister with population densities in the urban area colour-coded. This map was the basis for Budget Direct’s illustrated version.

Catering to a growing population in the metropolitan area, the Eastern Suburbs Railway had opened in 1979. The buildings by this time, meanwhile, were decidedly loftier, with the 50-floor Australia Square Tower having opened in 1967, the 67-storey MLC Centre in 1977 and the 48-storey Suncorp Place skyscraper in 1982. The iconic Sydney Opera House was another celebrated piece of architecture in place by now. Queen Elizabeth II opened the venue on October 20, 1973. 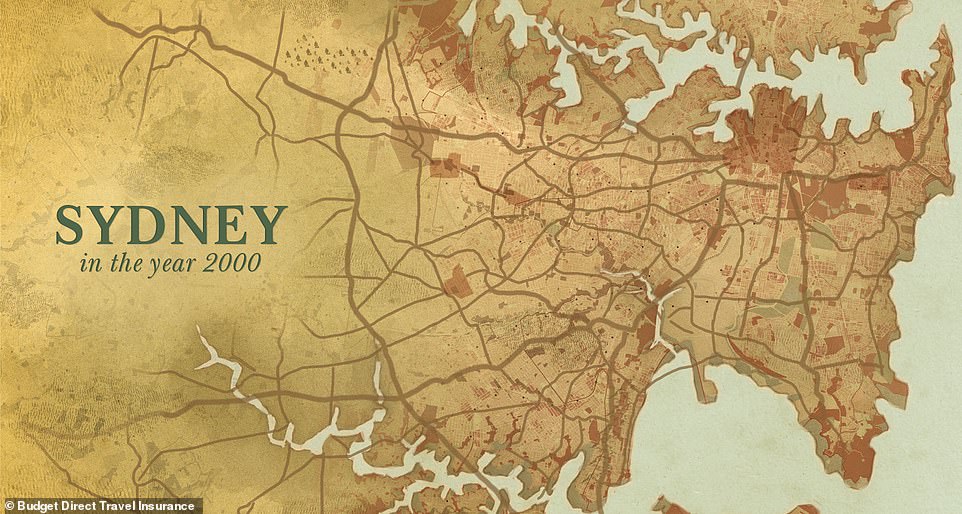 During the 90s the city saw a number of developments on the infrastructure front, including the opening of the Sydney Harbour Tunnel

This map was based on one created by the Transport Management Centre for internal use during the 2000 Sydney Olympic Games to help with traffic management. It was one of 16 maps produced during the sporting event.

During the 90s the city saw a number of developments on the infrastructure front, including the opening of the Sydney Harbour Tunnel in 1992 to help alleviate traffic on the Sydney Harbour Bridge and the completion of the M2 Hills motorway in 1997. 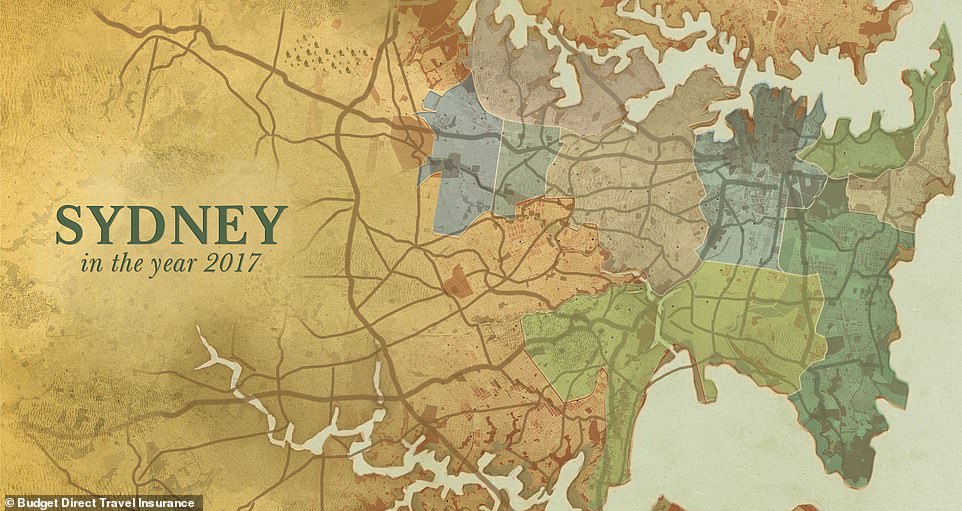 Many environmentally-focused projects got underway in the year 2017

In a bid to preserve and nurture the green spaces in Sydney, the governmental Department of Planning and Environment commissioned a ‘Green Grid’ map in 2017 to help aid the nurturing of green spaces, district by district.

Many environmentally-focused projects got underway including the redevelopment of Central Park, Barangaroo and Harold Park, with these schemes still in motion today. 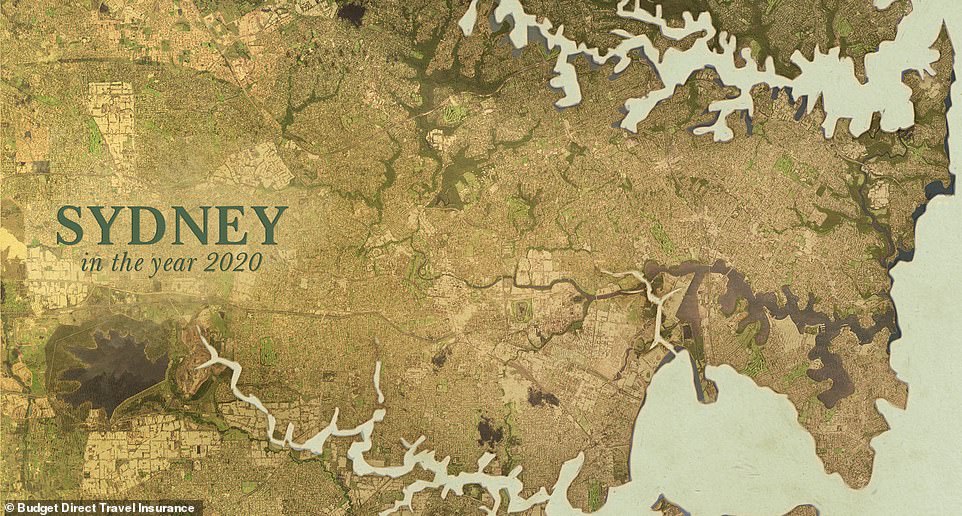 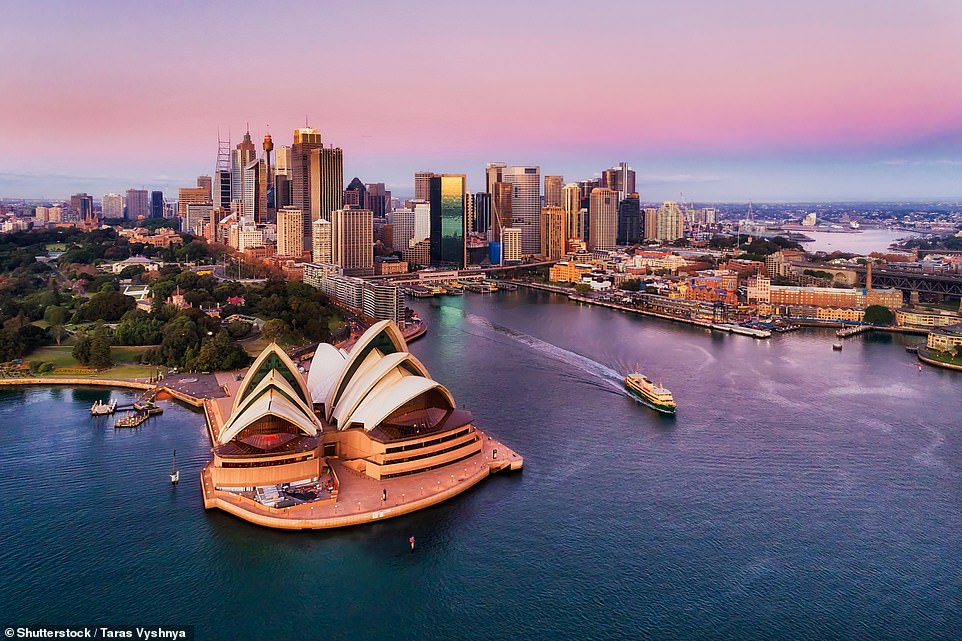 By 2029, the Australian Bureau of Statistics (ABS) predicts that Sydney’s population will reach 6.4 million – and the city continues to adapt to cater to this growth.

In 2019 Sydney’s first driverless metro line, the Metro North West, opened with services at 13 stations operating every four minutes. The line is being extended into the Sydney central business district and beyond and is scheduled to open in 2024.

10 of the best UK winter escapes

Holidays 2020: When can you travel abroad in the future? Country-by-country list