Britain at its best: Dorset rocks! Fabulous wildlife and exhilarating walks await on the Isle of Purbeck

Tyneham, on Dorset’s Isle of Purbeck, knows a secret or two about being locked down. In 1943, residents were asked to abandon their homes ‘for the duration of the emergency’ when the village within Lulworth firing range was requisitioned to prepare for the Normandy landings.

The good folk never returned. More than 75 years later, Tyneham remains a ghostly place. It’s still in the middle of a live army firing range, but is open to the public on days when the guns fall silent.

On one such day I arrive on foot, deviating into the range off the Dorset coastal footpath, with its ragged landscape, featuring the chalk stacks of Old Harry Rocks. From a distance it looks like a postcard English village. There is a church, an Elizabethan manor and a tiny school. As I get closer, I notice there are no power cables or roofs on the buildings. 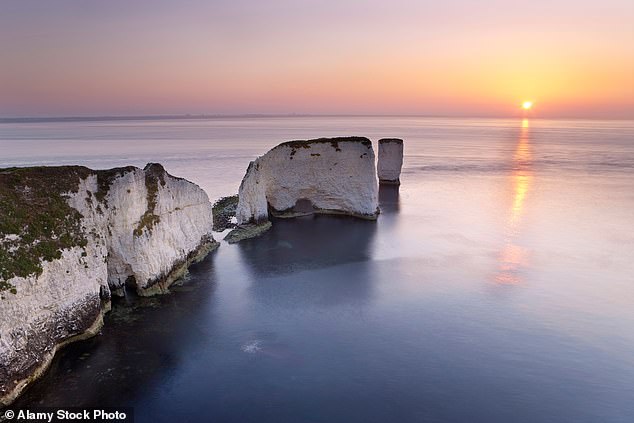 I explore the rows of cottages and farmhouses. Some have been spruced up and the undergrowth cut back. The effect is uncanny — rather than ruin, there is a sense of wholeness, with walls and empty windows still intact. I am put in mind, with a shudder, of a plague aftermath.

Purbeck is a peninsula, not a real isle. My exploration had begun at the almost perfectly circular Lulworth Cove, with its bizarre rock formations.

From here, the coast path takes me up and over gusty Gad Cliff and on an exhilarating trail that winds and roller-coasters its way around the peninsula.

However, I soon head inland, into a broad green valley that slices through the Lulworth Ranges.

Military occupation has produced some fascinating side-effects. I climb the ridge of Rings Hill and sit and eat sandwiches, looking out to the Tyneham valley. Here, I can make out the surviving medieval field patterns and hedgerows, protected from the ravages of post-war deep ploughing.

Some species of plants and wildlife, decimated elsewhere by pesticides and habitat destruction, also come to thrive in these battlefield conditions.

Swallowtail and comma butterflies are abundant, as are wildflowers. I spot several hares, and I’m almost certain that I glimpse a weasel darting into some undergrowth.

Outside the firing range, there are inhabited villages scattered over Purbeck. Some, such as Kimmeridge and Worth Matravers, have been trading on their history and beauty for decades, with twee boutiques and tea shops.

Exploring by car the following day, I find that Kimmeridge is the very model of an English thatched village, set in a gorgeous location above a bay. 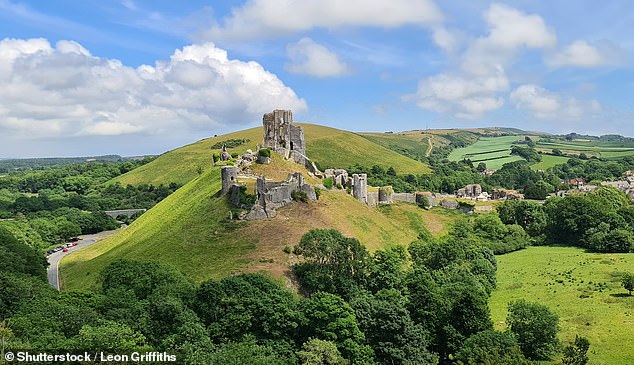 The ruins of Corfe Castle are Purbeck’s most famous landmark. It was destroyed by Cromwell in 1646

From the circular Clavell observatory tower, the Kimmeridge Ledges — cliffs of grey limestone streaked with white and blue — overlook a string of bays.

These are lined with the geometric shapes of cracked and splintered rock, scattered like children’s building blocks at the foot of the sheer rock wall.

To the far west is Portland, an island tethered to Weymouth by a narrow neck of land. Out of the hazy south-east looms the Isle of Wight, like a jigsaw-puzzle piece that could easily be slotted back into the Hampshire coastline.

Worth Matravers has the famous Square & Compass pub, which dates back to the heyday of Purbeck’s marble quarrying — the peninsula provided the limestone used in Westminster Abbey and several English cathedrals.

Footpaths connect tiny collections of cottages such as Steeple, in the valley of Corfe, with East Creech on the other side of Ridgeway Hill.

Eastwards, on top of the ridge, lies Corfe Castle, Purbeck’s most famous landmark.

All roads on Purbeck seem to lead to Corfe. The jagged castle ruins flit in and out of view along the ridge.

Built by Normans in the 11th century to guard the Purbeck Hills, it was at the crossroads of various battles, culminating in its destruction by Cromwell in 1646.

From Rings Hill my eyes are drawn to the tiny abandoned hamlet set in a copse, reached by a road through the firing range. Barriers are raised to allow in visitors eager to find a slice of preserved wartime Britain.

The Priory Hotel in Wareham is open and has B&B doubles from £220 (theprioryhotel.co.uk). For more information, including Lulworth Ranges access times, visit dorsetcoast.com.

Young flyers get their journey off to a first class start ·

You Can Rent This HGTV Host's Actual House on Airbnb