Home » Travel » Exploring the delights of Beverley, a medieval marvel in Yorkshire

Britain at its best: Exploring the delights of Beverley, a medieval marvel in Yorkshire that’s awash with beautiful half-timbered buildings and boasts an epic gothic minster

One stop up the line from our halls of residence (and a world away from lectures and tutorials) the medieval market town of Beverley was a regular Friday night haunt for Hull University students in the 1980s.

Beverley, population 30,000, was once the largest town in the East Riding of Yorkshire. Today, it’s still the county town.

It has a famous racecourse, a wide, cobbled market square and many fine Georgian townhouses. It also has a huge, gothic minster that has been called ‘the second-finest non-cathedral church in England’. That sounds like a back-handed compliment until you find out the top spot is taken by none other than Westminster Abbey. 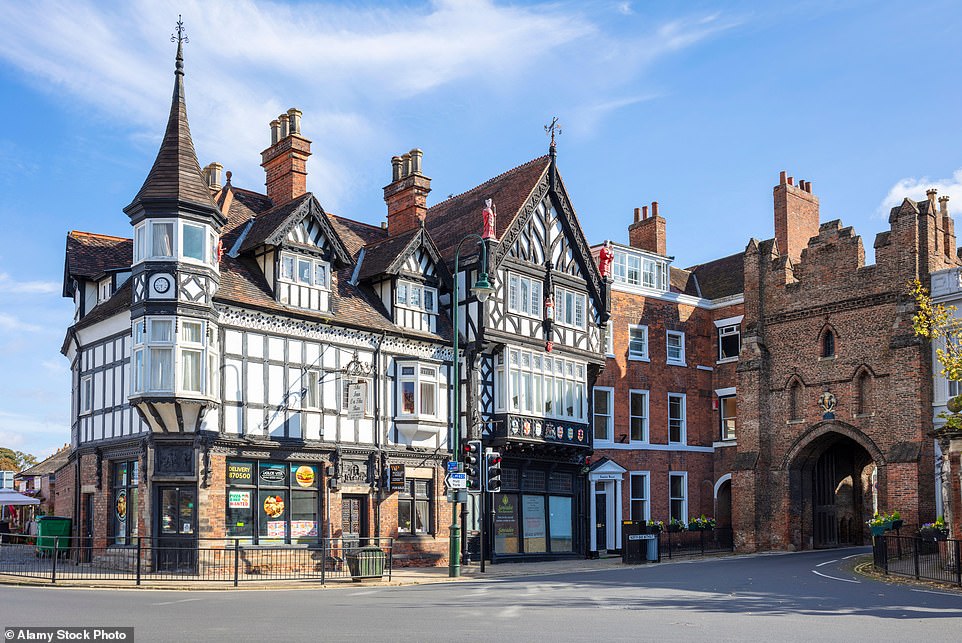 Built to last: Above is a view of the half-timbered buildings in Beverley and the town’s famous North Bar gate

What’s more, Beverley Minster has the edge on the Abbey with its spectacular, rural setting. Looming like an ocean liner anchored on the flat, green sea of the Holderness plain, you can’t miss it.

But we used to pass it with hardly a glance. Our priorities were different then.

A night at the Beverley Arms Hotel was certainly beyond a student budget. But this 18th-century coaching inn (which was fully refurbished in 2018) is an ideal base for seeing what, if anything, has altered since the days of those pub crawls. 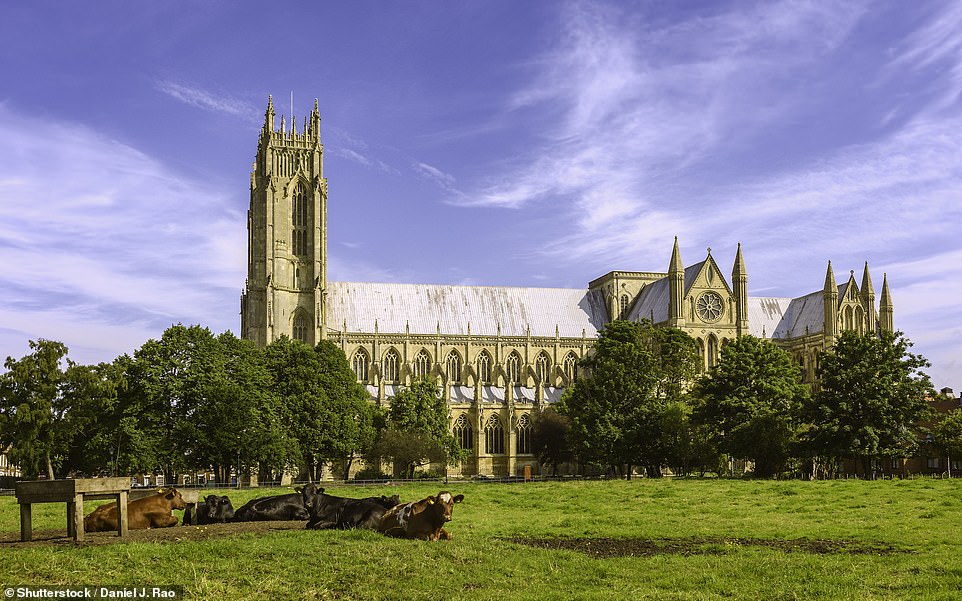 Tim says that you can’t miss Beverley Minster (pictured), which looms ‘like an ocean liner anchored on the flat, green sea of the Holderness plain’

And it’s only a short walk down Hengate to a particular favourite spot. At first glance, The White Horse — or ‘Nellies’, as it’s known, after a former landlady — seems unchanged. The old tobacco-stained decor looks the same, as does the light from the dim electric bulbs, still housed in the old gas fittings. It could be a Dickensian film set. But something’s not quite right. It takes me a couple of pints to realise that it’s the cigarette smoke (or lack of it).

The nicotine fug that used to fill the crowded rooms has long gone. Smokers are now banished to the small yard beyond the laundry room, ‘out t’back’.

Opposite Nellies is what, in any other town, would be the main attraction. St Mary’s, a fine perpendicular church. It was built as a parish church then extended by the medieval merchant guilds with wealth from the wool trade. The late 14th-century west front is said to have inspired the chapel of King’s College, Cambridge. You can certainly see the similarities. 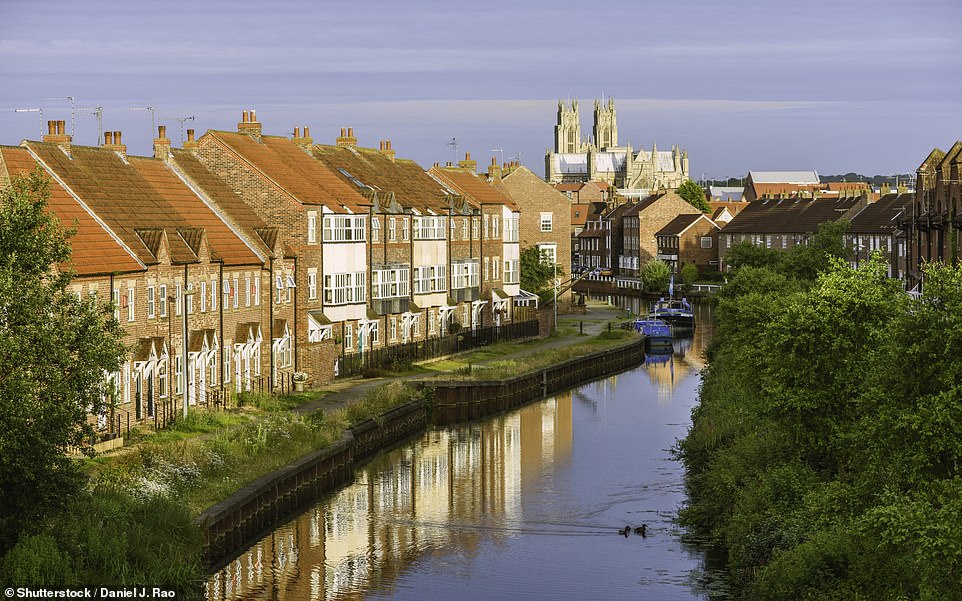 Beverley, which has a population of 30,000, was once the largest town in the East Riding of Yorkshire, Tim reveals 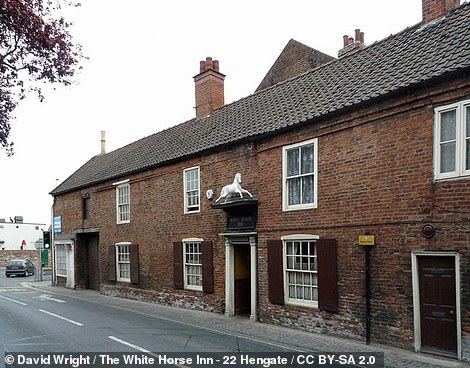 The interior of The White Horse (pictured in the centre) ‘could be a Dickensian film set’, says Tim. Picture courtesy of Creative Commons

Currently in the second phase of a major restoration project, the building’s crumbling stonework on the south nave clerestory is being replaced with carvings of nine female pioneers, including aviator Amy Johnson (born in Hull) and author Mary Wollstonecraft (who lived in Beverley as a child).

A short walk from St Mary’s is Beverley’s famous North Bar, the only surviving example of the three medieval gates (linked by a ditch) that once guarded the town.

Built in 1409 (at a cost of £96-0-11½d), this was the meeting point for King Charles I’s officers at the start of the English Civil War, where they drew up plans to capture the ‘King’s Town’ of Hull.

Local double-decker buses once had to have special, dome-shaped roofs fitted in order to pass beneath the brick arch. 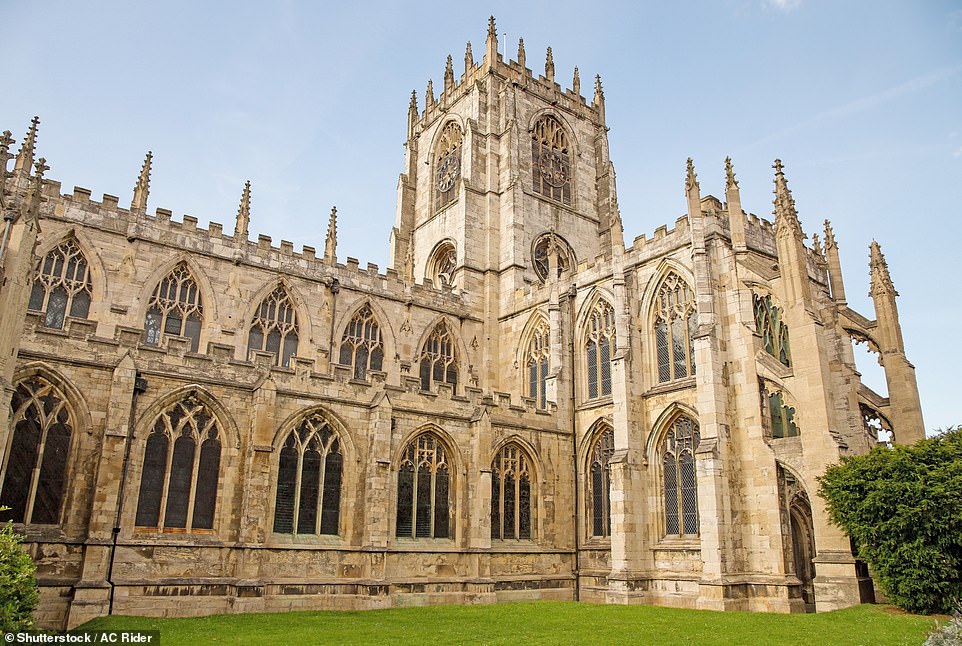 Above is St Mary’s, which was ‘built as a parish church then extended by the medieval merchant guilds with wealth from the wool trade’

The old wooden doors are still in place.

The town was founded by its very own saint in 700AD, when he built a monastery on the site where the Minster stands.

John of Beverley ordained the Venerable Bede and later became Archbishop of York. On his retirement, he returned to the monastery, and was buried there four years later.

In the Middle Ages, the cult of St John was huge. Edward I stopped to pray at the saint’s tomb on his way north to fight the Scots, and Henry V credited his victory at Agincourt to John’s intervention.

As my finals loomed in 1986, it felt like I needed some divine intervention. And perhaps a little of the spiritual magic rubbed off as we ‘thirsted after righteousness’ back then — because ultimately I scraped a 2:1. Thanks, St John.

Could the UAE, Bahrain be back on the UK's safe travel list soon?