In 1864 the first tea shop opened in London, on Fleet Street, offering patrons the chance to order ‘afternoon tea’ and consume the repast formerly enjoyed only by aristocratic ladies.

Thus spawning a very English obsession. Meanwhile, over in the ever-fashionable Monaco, 1864 saw the opening of the Hôtel de Paris Monte-Carlo.

If England is a nice calm cup of tea with a moist piece of cake, Monaco is similarly represented by its flagship hotel. 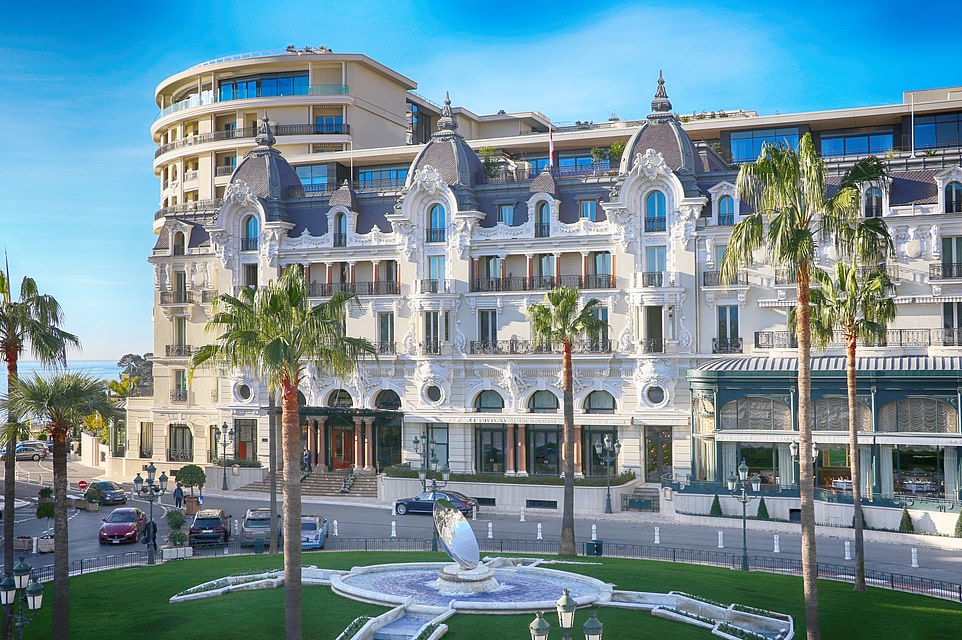 The Hôtel de Paris Monte-Carlo opened in 1864. From the outset it strived to offer the finest of hospitality standards 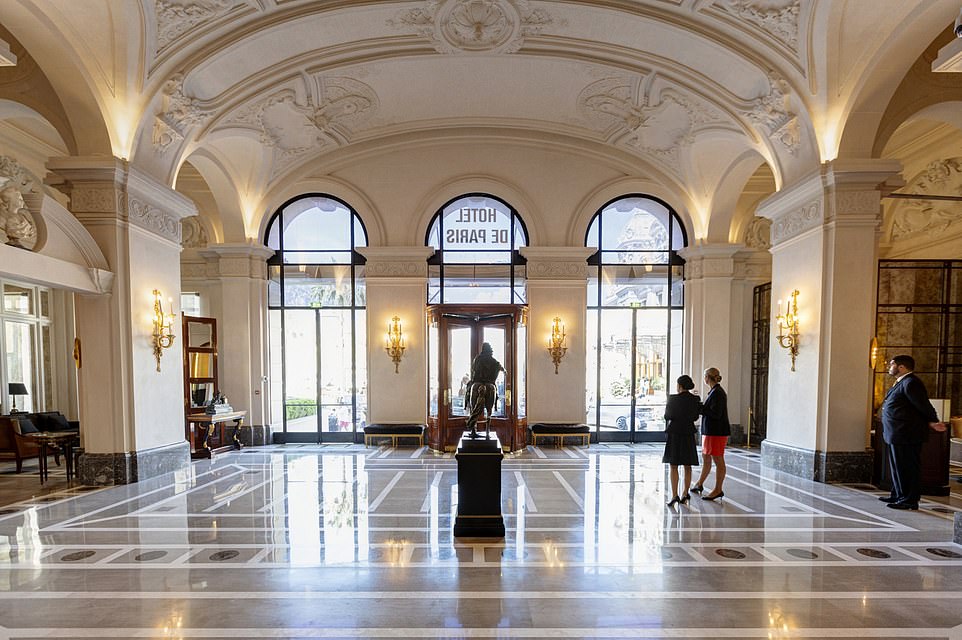 The Hôtel de Paris Monte-Carlo has undergone a four-year, £250million revamp, but stayed open for the duration of its refit 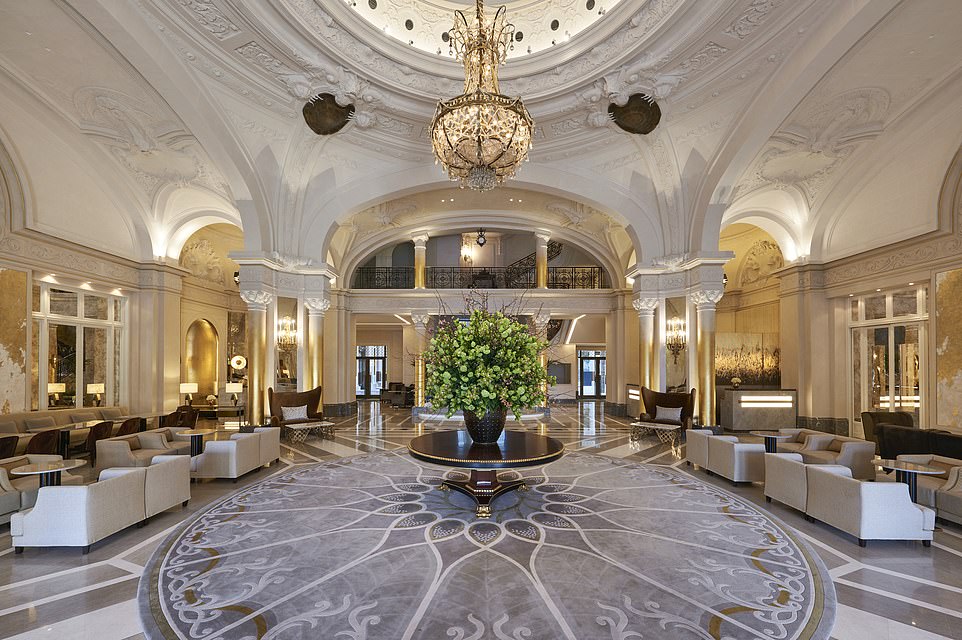 Opulent: William says the vaulted lobby is now much lighter and airier than it was before

The belle époque icon was built for guests of the neighbouring casino to rest in between each night’s hard graft at the baize card tables.

From the outset it strived to offer the finest of hospitality standards and set the tone in the principality. Other hotels emerged too, such as The Grand, which was run for a time by Cesar Ritz before he moved to London to resuscitate the recently opened Savoy.

All hotels go through much-needed renovation and periods of cosmetic and structural change, but perhaps none have been so ambitious as the four-year, £250million revamp of Hotel de Paris.

Unlike the aforementioned Savoy, which closed for three years and spent just £100 million, the Monte Carlo grande dame stayed open for the duration of its refit. 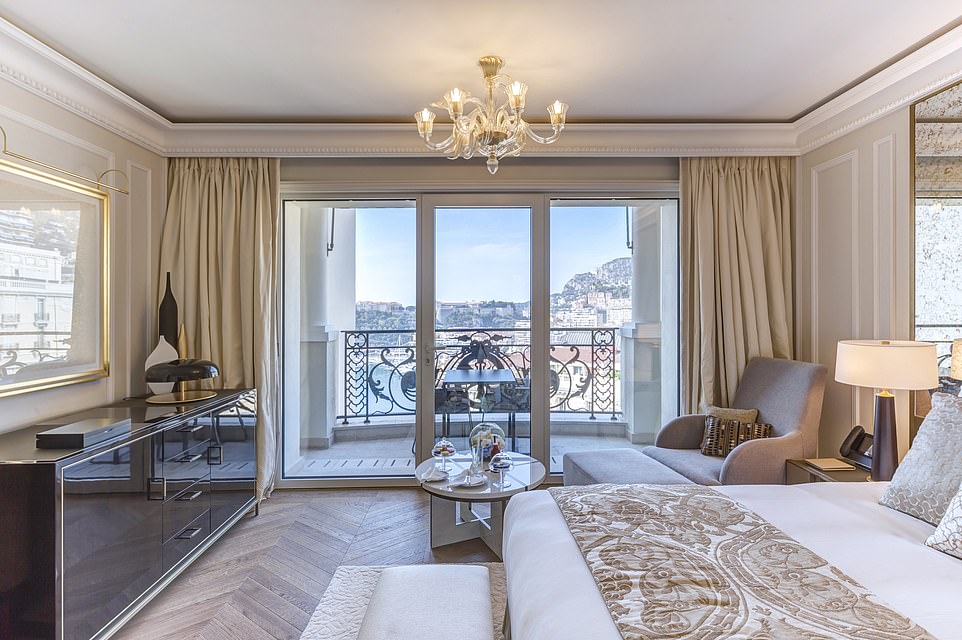 William says the bedrooms have ivory walls with muted gold detailing. The starting price? Over 700 euros 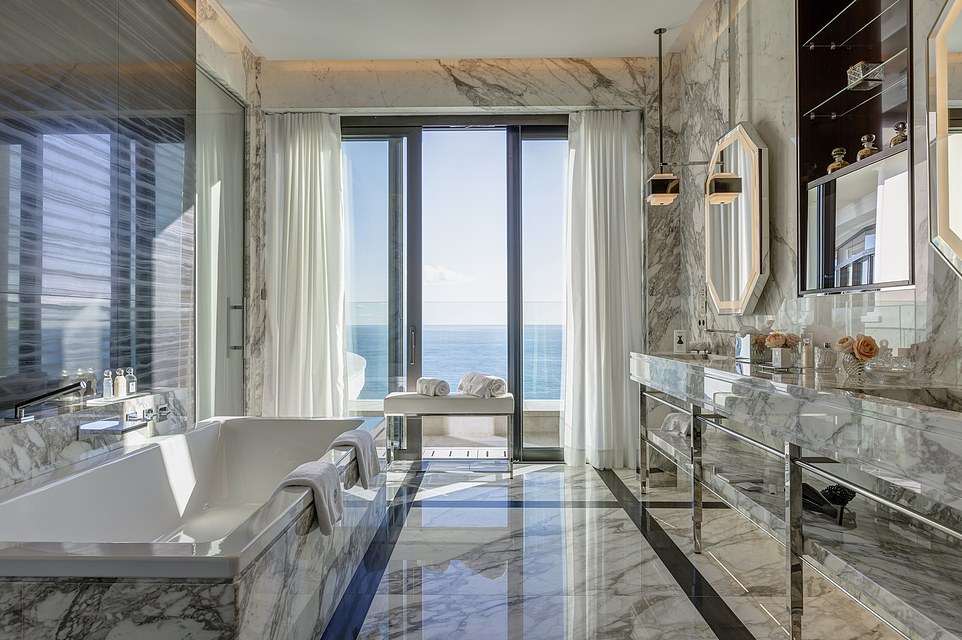 The bedroom bathrooms are awash with marble, as this mouth-watering image shows 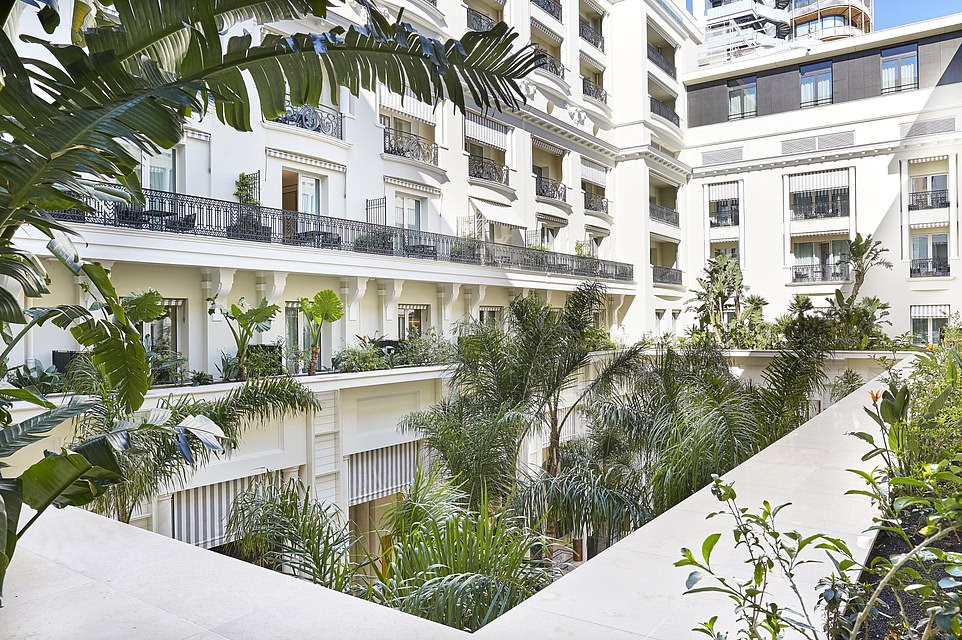 The hotel has several dining options including the Michelin-starred Le Grill, pictured, which overlooks the Mediterranean 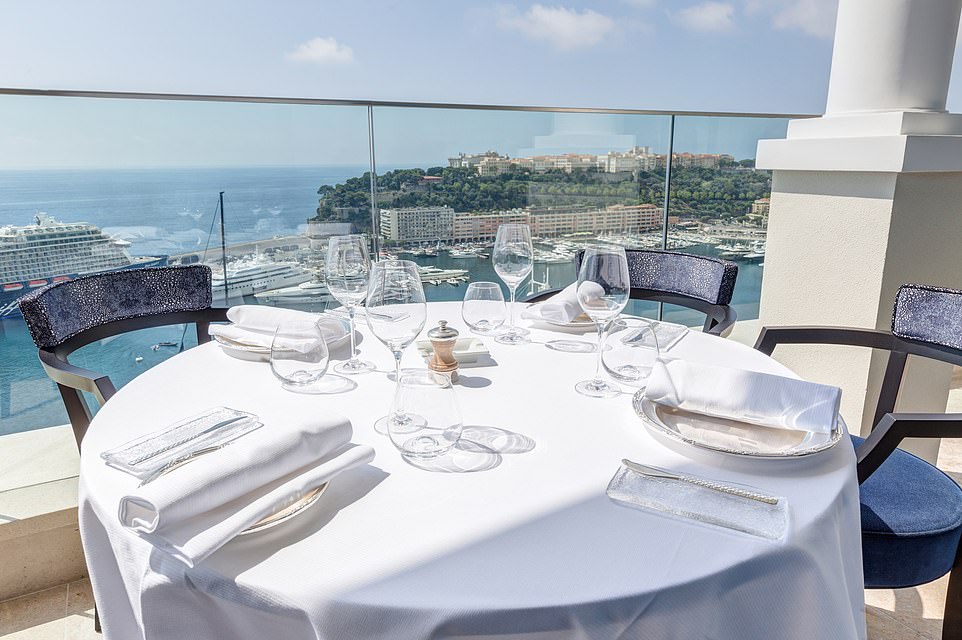 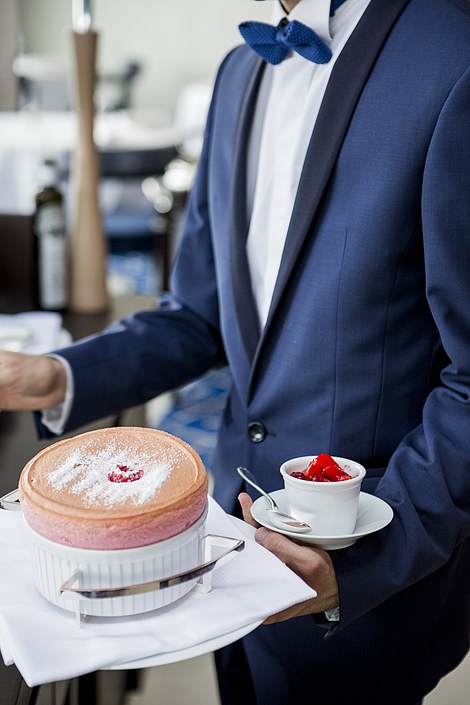 It’s a competitive world for hotels in Monaco, let alone in Monte Carlo (ingénues – don’t forget that Monte Carlo is a district within Monaco). There are five five-star hotels located in the area that spans just three-quarters of a square mile, although three of them are owned and run by Société des Bains de Mer – so perhaps it’s not much of a competition for them.

The recent refurbishment left no part of the hotel untouched. The vaulted lobby is now much lighter and airier than it was before, although the bronze statue of Louis XIV astride his horse is still in prime position.

Apparently, if you rub the cocked knee of the horse you are in for plenty of good luck in the casino. (I didn’t do any gambling during my visit but I did find a fifty pence piece down the back of the sofa when I got home, so there’s something in it.)

The bedrooms are symphonies of ivory walls with muted gold and bronze detailing; the bathrooms are awash with marble.

What was perhaps most heartening to learn is that a decent chunk of the renovation budget went into improving things for the staff.

For example, the large divans have a system where, at the touch of a button, they lift up the mattresses so housekeeping staff can more easily change the linens.

Speaking to the friendly chap who delivered some drinks to my room, he agreed that the current incarnation of the hotel is much better than when he first worked there 25 years ago.

The hotel has several dining options – including the three-Michelin-starred Le Louis XV – Alain Ducasse à l’Hôtel de Paris – but perhaps the most visually interesting is on the eighth floor: the Michelin-starred Le Grill, which overlooks the Mediterranean. 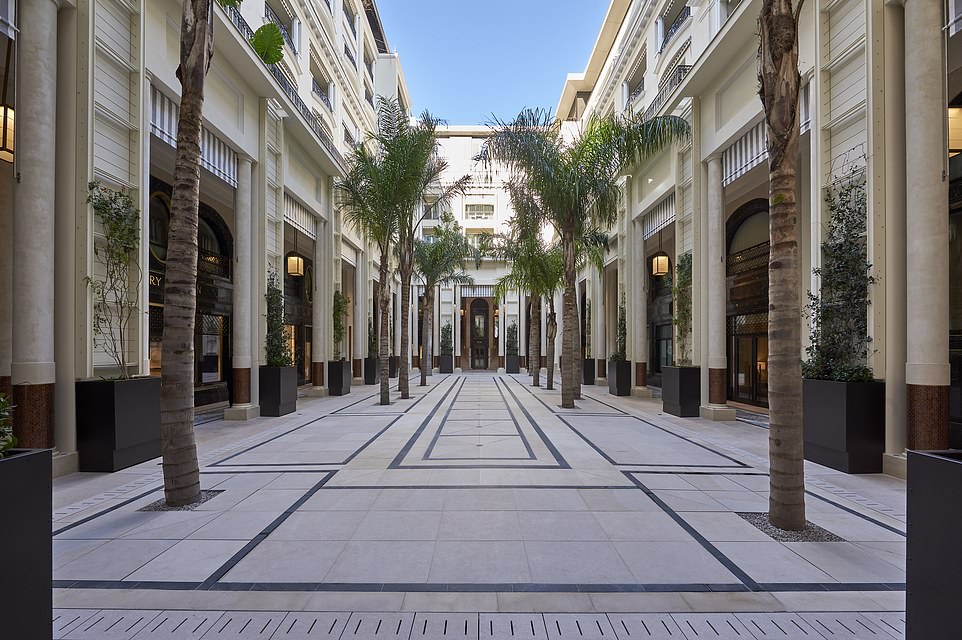 William says that a friendly chap who delivered drinks to his room agreed that the current incarnation of the hotel is much better than when he first worked there 25 years ago. Pictured is the hotel’s patio 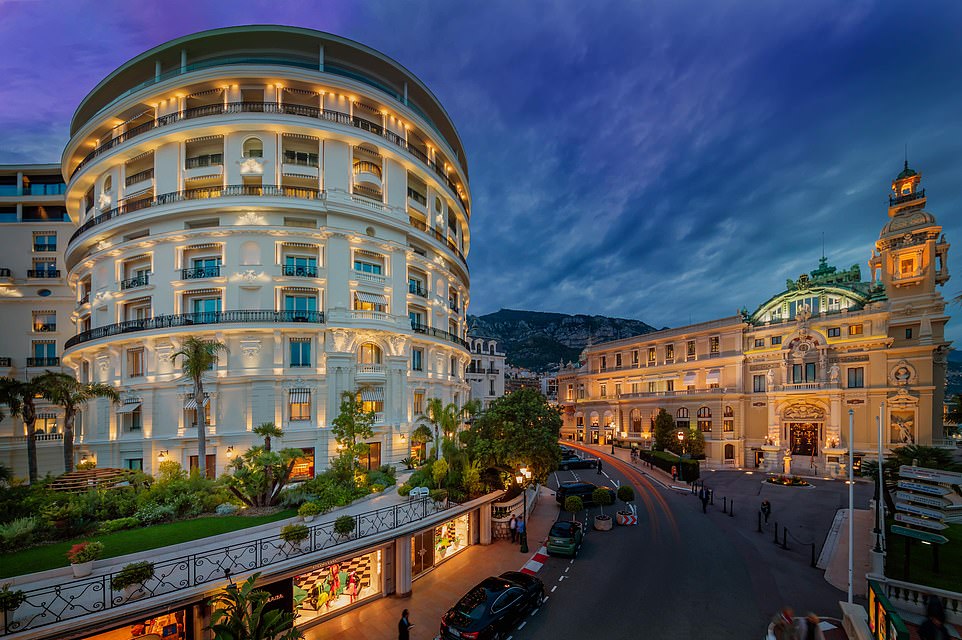 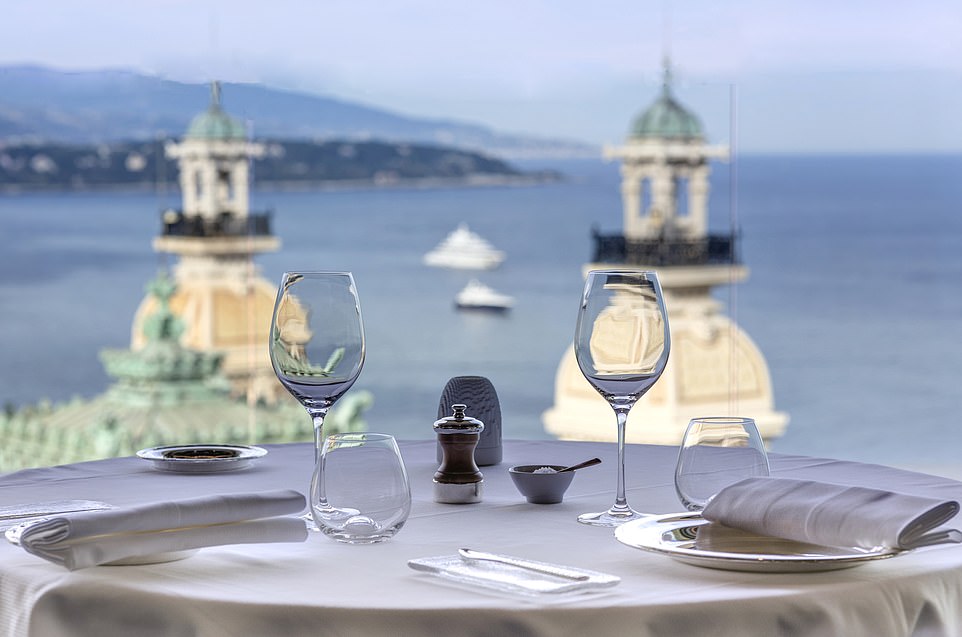 William was hosted by the Hôtel de Paris Monte-Carlo, where rooms are available from 705 euros (£643), including breakfast. For more information visit www.montecarlosbm.com.

If the cerulean vista isn’t enough the roof silently retracts to reveal the star-sprinkled sky, which adds much excitement until you look down to be confronted by the most monumentally delicious soufflés, any of which could feed a village. As Dame Maggie once remarked, nothing succeeds like excess.

You may notice the balletic movements of the waiting staff at Le Grill – they were all trained in ballet ahead of the relaunch to add flair and polish to their service. (The arabesque as they cleared the bread plates was a bit much, however.)

When £250 million is spent on a hotel it is perhaps an inevitability that the end result will be a carnival of glitz: especially when that hotel is placed in Monte Carlo, where every car that passes you on the street is a sports car.

But the reincarnation of Hôtel de Paris Monte-Carlo has kept within the gossamer lines of justifiable excess and good taste.

Thanks to support from Prince Charles III and Monte-Carlo Société des Bains de Mer et du Cercle des Etrangers, the billionaire François Blanc took a big gamble and decided to entirely change an area of the city covered in olive trees and lemon trees into a decadent venue of gaming and luxury – Casino de Monte-Carlo and Hôtel de Paris Monte-Carlo.

The most talented designers in France and worldwide were carefully selected to ensure the best result. 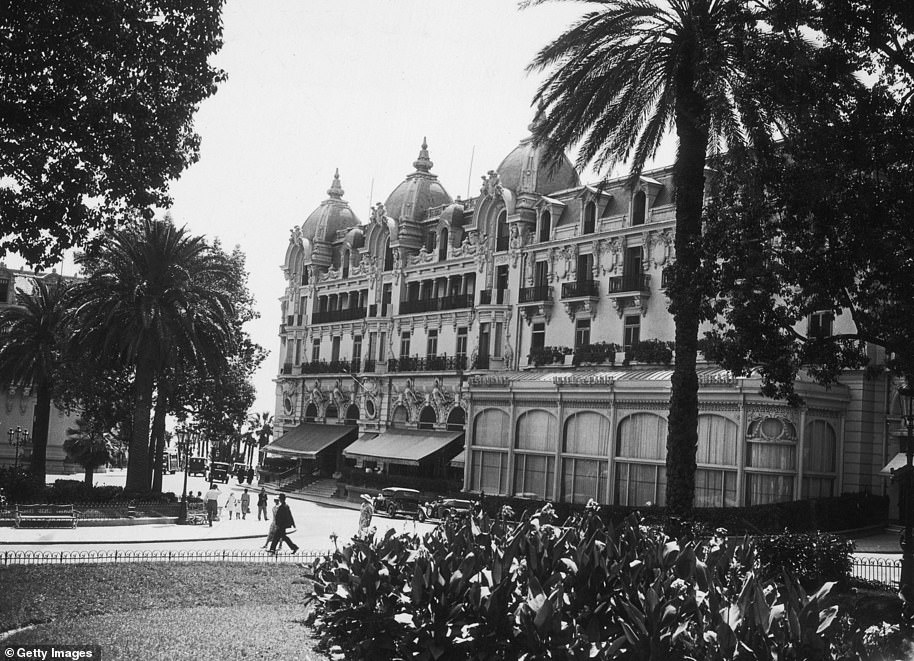 The very grand exterior of the Hôtel de Paris Monte-Carlo in a picture dated to August 21, 1934

For players travelling from all over Europe to discover the new face of the Principality, he had a hotel built on the model of the Grand Hôtel in Boulevard des Capucines in Paris. Affluence in all its splendour, the international elite rushed to stay – Kings, Princes, Heads of State, Ministers, the very best from governances, industry, science and the arts.

The most talented designers in France and worldwide were carefully selected to ensure the best result.

The Hôtel de Paris was a real haven of tranquillity for its guests. Many of them have been British: Lloyd George, Sir Winston Churchill, Sir Robert Vansittart and the Duke of Westminster all graced its corridors. Aga Khan, the Maharani of Kashmir, Prince Peter and Princess Violet of Montenegro, the Countess of La Rochefoucauld and René Blum were also among the hotel’s famous guests.

The cast of James Bond film Goldeneye stayed the night too (it was briefly visible both in Goldeneye and Casino Royale – but Bond has never actually stayed in the hotel).

Today, says the hotel, ‘Hôtel de Paris Monte-Carlo continues to be admired by guests from all over the world and bears witness to a lifestyle that harmoniously combines tradition and contemporaneity.’

It adds: ‘Now, it is writing a new page in its history.’

Spain to lift entry restrictions for UK travellers from March 30 – but will you be fined?