Despite a growing number of tour operators ceasing to offer elephant rides as part of their itineraries, elephants around the world are still being used for such tourist entertainment and dying in the process.

The most recent example is in Sri Lanka, a country where elephants face a challenging existence at best.

A report late last week from the Mirror confirmed that an elephant in Sri Lanka died from exhaustion after being forced to carry tourists on safari.

The animal, who had been given the name Kanakota, was carrying a group of visitors in unbearable heat when he collapsed, according to the Mirror. Unable to take anymore, he laid down on October 18 and never woke up.

The publication included heartbreaking footage of the brutal incident, which concluded with the dead 18-year-old elephant’s body covered under a blanket while distressed locals stood around.

According to media reports, the elephant is believed to have already carried three groups of tourists the day he died and had taken part in a parade the day before.

The death is yet another example of the inhumane treatment the gentle animals endure throughout southeast Asia in order to entertain hordes of tourists.

For years now, reputable travel companies have been joining forces to take a stand against the elephant camps that offer tourist rides. But true change will only come when travelers stop riding elephants when visiting the region and stop supporting venues that use elephants for entertainment like circus acts. 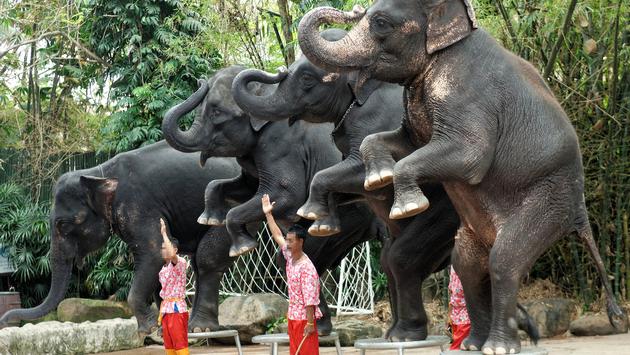 During the brief period of time a tourist may spend with an elephant in Asia, it’s impossible to fully grasp the brutal realities of the animal’s life.

When not giving rides or performing for a tourist’s entertainment, elephants are chained all day and night, often on chains less than three meters long.

They are fed poor diets and given no opportunity to socialize, which is traumatizing for such highly-intelligent creatures who are used to forming strong social bonds and living in tight-knit clans.

Making matters worse, they receive only limited veterinary care and are frequently kept on concrete floors, according to World Animal Protection, a global non-profit organization working in more than 50 countries and on six continents.

None of which takes into account the torture and trauma the elephant endured during its earliest years.

As had been reported extensively by World Animal Protection and other organizations, elephants that are forced to give rides at tourist attractions are often forcibly separated from their mothers as infants, bound with ropes or chains, and gouged with nails or other sharp objects as part of a crushing process known as “phajaan.”

In September, Fodor’s Travel announced it had stopped recommending elephant rides and had updated its content to provide information about the cruelty inherent in captive-elephant attractions. In doing so, Fodor’s joined a long list of travel industry companies and brands that have ceased offering such rides amid mounting evidence of the cruelty involved.

This latest death of an elephant in Sri Lanka comes on the heels of an investigation conducted by the campaign group Moving Animals, which found disturbing evidence of “safari” elephants being chained and threatened with spear-like bullhooks.

In addition, it was found that groups of tourists are made to sit on seats on the elephants back that cause the animals severe pain.

In order to bring about change for elephants in the region, new laws need to be adopted to protect them, say the campaigners. Currently, those who exploit elephants face only minimal fines.

“This young elephant’s tragic and cruel death was entirely preventable,” Paul Healey, from Moving Animals told the Mirror. “Until tourists refuse to ride elephants, more of these gentle giants will continue to suffer and collapse from exhaustion.”

“We urge tourists to never ride an elephant, and call on the Sri Lankan government to instate a new Animal Welfare Bill that will finally offer protection to the country’s amazing array of animals and wildlife,” said Healey.

Woman wakes up as she is being sexually assaulted on flight

Denied in Aruba, Crystal Serenity sets a course for Bahamas