Hot on the heels of the opening of Star Wars: Galaxy’s Edge, Disneyland Resort is pressing ahead with a new Marvel-themed land.

The city of Anaheim last week approved building permits for projects related to the new land, which will be built at Disneyland’s California Adventure Park.

The comic-based attraction will be anchored around current ride Guardians of the Galaxy – Mission: Breakout!, which opened in 2017 – and is set to open next year. 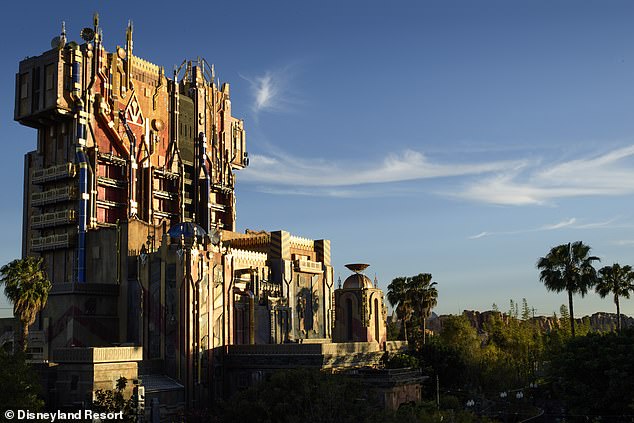 Hot on the heels of the opening of Star Wars: Galaxy’s Edge, Disneyland Resort is pressing ahead with a new Marvel-themed land. It will be anchored around current ride Guardian of the Galaxy – Mission: Breakout!, pictured, which opened in 2017

According to the LA Times, the building permits that have been approved are for projects including a bathroom overhaul, a retail outlet, a microbrewery and a character meet-and-greet area.

Another is for a huge 2,071-square-foot merchandise outlet with three attached canopies. The permits assess the value of the work so far at over $14million.

To make room for the new superhero-themed area, workers are currently demolishing A Bug’s Land, which closed last year.

Building work is taking place behind a temporary wall with the words ‘Stark Industries’ emblazoned across it. Tony Stark is the alter ego of Marvel character, Iron Man. 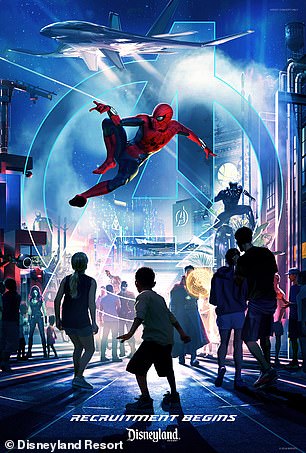 So far, Disney has remained tight-lipped on what rides and attractions will be included in the new land.

But in March last year, when it announced the opening of a Marvel-themed attraction in California, Disney said: ‘The Guardians of the Galaxy will be joined by Spider-Man and the Avengers in what will become a completely immersive Super Hero universe.

‘This expanded presence will begin recruiting guests in 2020, furthering the evolution of Disney California Adventure park.’

More details are expected to be revealed at D23, a Disney celebration taking place in Anaheim at the end of August.

However, it is known that the land will not include the word Marvel in its name due to a licensing deal that was signed before Disney bought the Marvel franchise.

The big draw is a massive replica of the Millennium Falcon, where guests can roam the ship’s halls and engage in a dogfight with Tie Fighters. Another ride called Star Wars: Rise of the Resistance is set to open later in the year.

This Travel Credit Card Gives You 3 Reward Points for Every Dollar Spent. Here's Why It's the Best of 2018

Shoppers Love This Sporty, Stylish Track Jacket — and It’s Back in Stock