Murren takes gold! The first slalom race was held in this Swiss resort 100 years ago. Today, it’s a winner for all abilities (and queues are non-existent)

As cosy and welcoming as a favourite sweater, the car-free village of Murren, high in the Swiss Alps, could hardly show its enthusiasm for all things British more keenly than if there was a game of village cricket going on in the main square.

Which isn’t going to happen of course, as the Swiss aren’t too keen on cricket and the landscape is full of mountains — some of the most beautiful on Earth.

But they love the British and right now the village is engaged in a season-long jamboree celebrating the centenary of slalom ski racing, first staged by British tourism pioneer Sir Arnold Lunn. There have been gala dinners and endorsements from ski celebrities such as Dave ‘The Rocket’ Ryding, who recently picked up Britain’s first slalom gold medal in a beautiful piece of skiing — so he knows what he’s talking about. 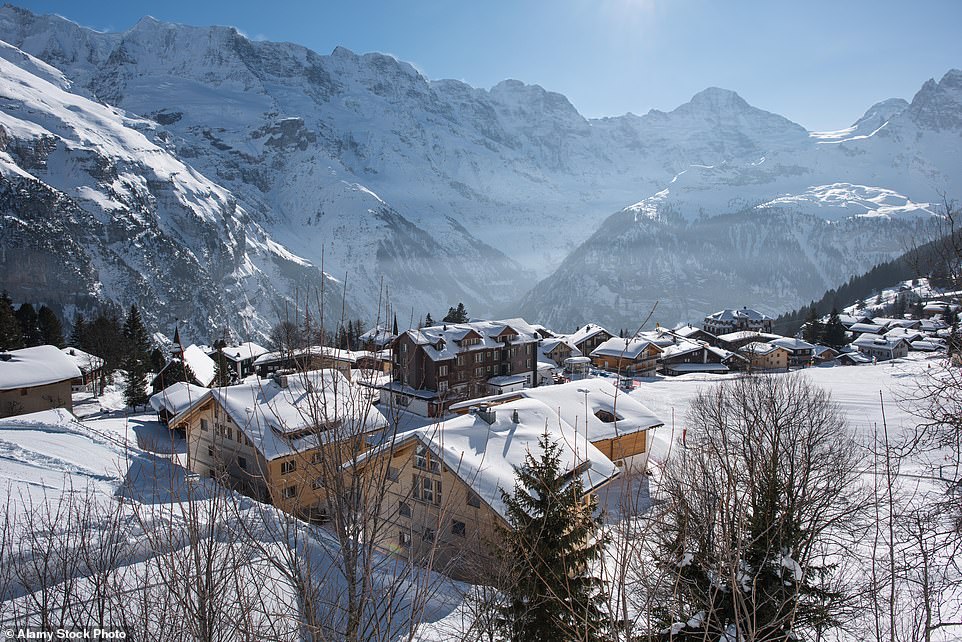 Peak performance: The pretty village of Murren, pictured, became the cradle of skiing and ski racing in the early 20th century 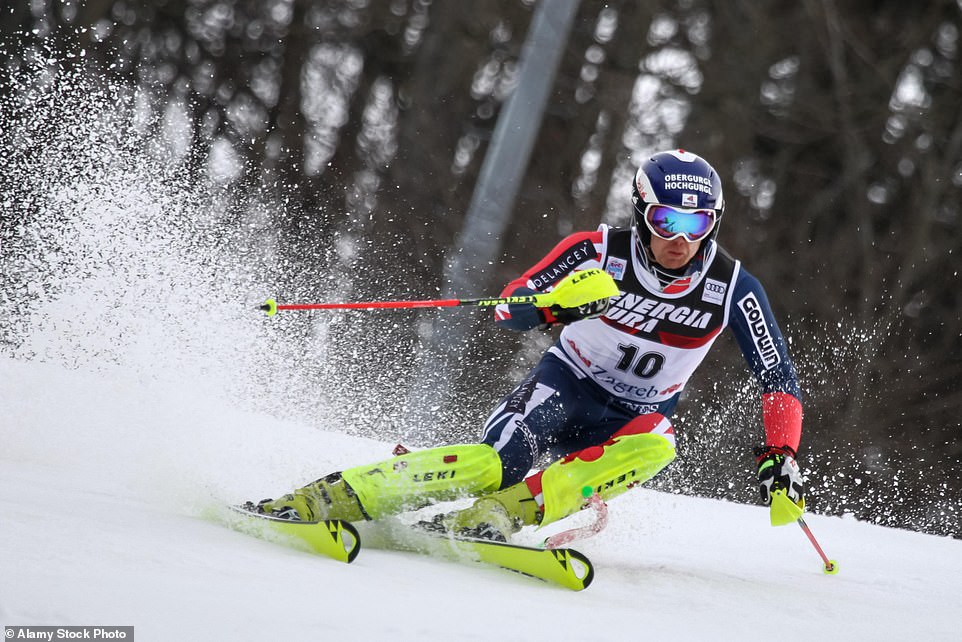 Murren is engaged in a season-long jamboree celebrating the centenary of slalom ski racing, with endorsements from ski celebrities such as Dave ‘The Rocket’ Ryding (pictured)

The links with Britain are everywhere. Murren’s tourism director Rachel Arkin describes it as ‘a close and lived friendship’. In World War I, injured British prisoners of war were interned here as part of a deal between the great powers (injured German PoWs went to Davos) and soldiers wed locals.

Sir Arnold saw how the village could be developed for tourism in the 1920s and 1930s and Murren became the cradle of skiing and ski racing. Even now the Inferno race, the climax of a week of events in January every year, is a pilgrimage for adventurous amateur and intermediate skiers. It’s the world’s longest downhill race at up to 15km with a 2,000 m drop. Don’t worry: you can just watch.

‘Never has so much snow been skied by so few’ was the verdict on the Covid-squeezed season in Murren last year. It hasn’t changed much this season. The ski area is huge, queues are non-existent and the snow is plentiful. You have the mountain almost to yourself. 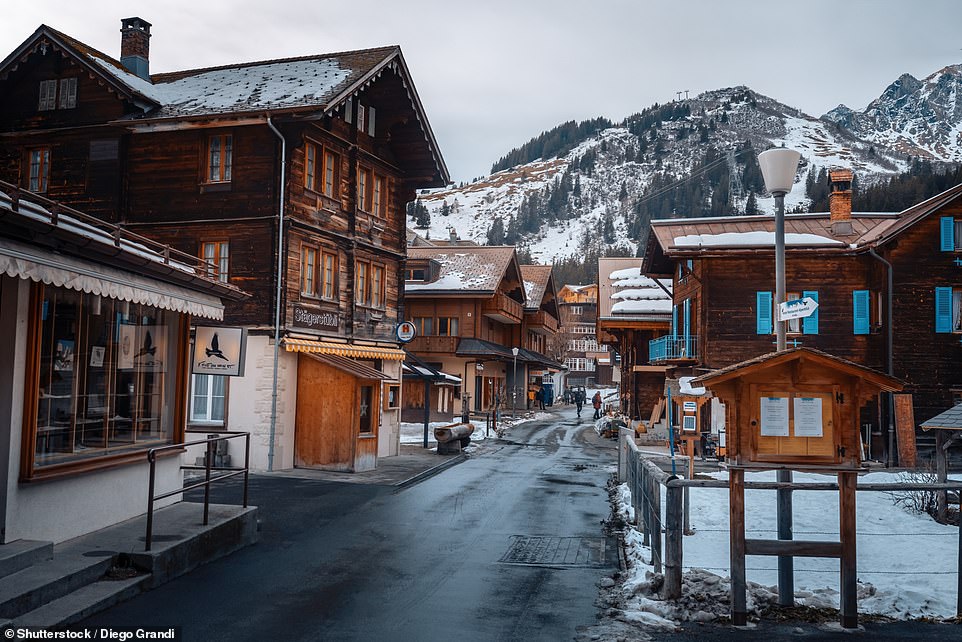 Many visitors return to the village (pictured) each year, and Murren now has a good share of British residents 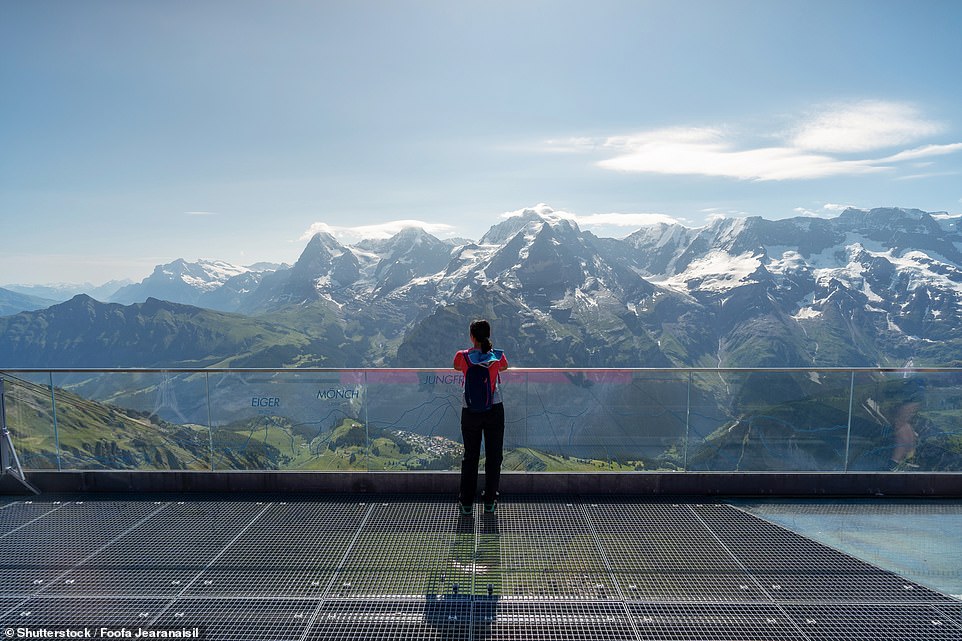 The ‘spectacular’ view of the mountain triumvirate of the Eiger, Monch and Jungfrau from the top of the Schilthorn

And it feels like skiing in the garden of the gods with the mountain triumvirate of the Eiger, Monch and Jungfrau dominating this part of the Bernese Oberland.

Many visitors return each year, and Murren now has a good share of British residents. Nick, who runs the ski hire shop in the sports centre, used to live in Brighton. He says: ‘It is brilliantly organised here and everyone is bending over backwards to make sure everyone has a good time.’ In addition to great skiing, there’s tobogganing, and skating, too.

Above all, don’t miss the excellent Piz Gloria restaurant at the top of the Schilthorn, just a tick under 3,000 m. That’s the revolving restaurant blown to smithereens in the Bond movie On Her Majesty’s Secret Service, much of which was filmed in the village. 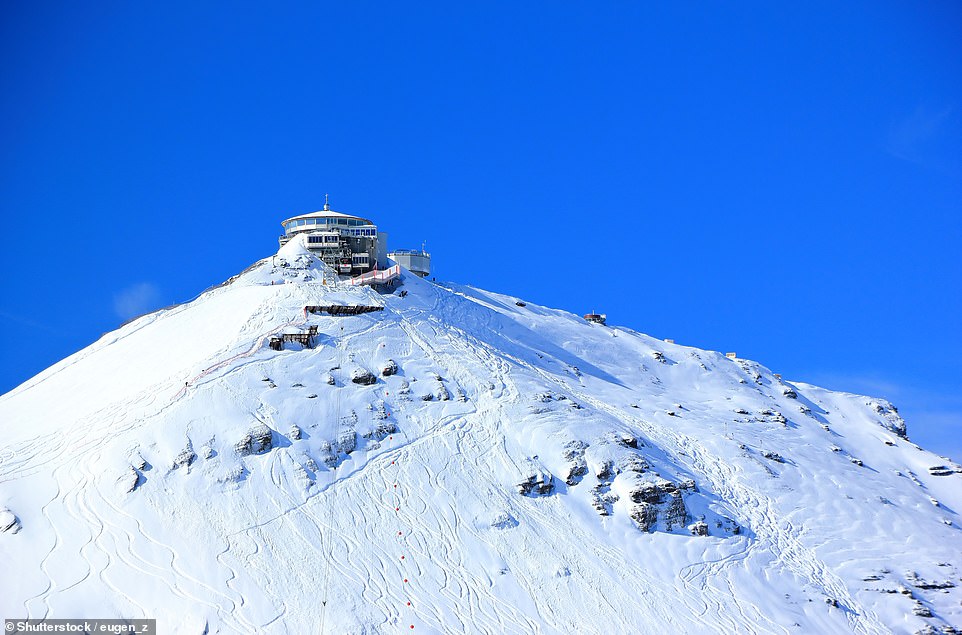 Don’t miss the excellent Piz Gloria restaurant (pictured) at the summit of the Schilthorn, just a tick under 3,000 m 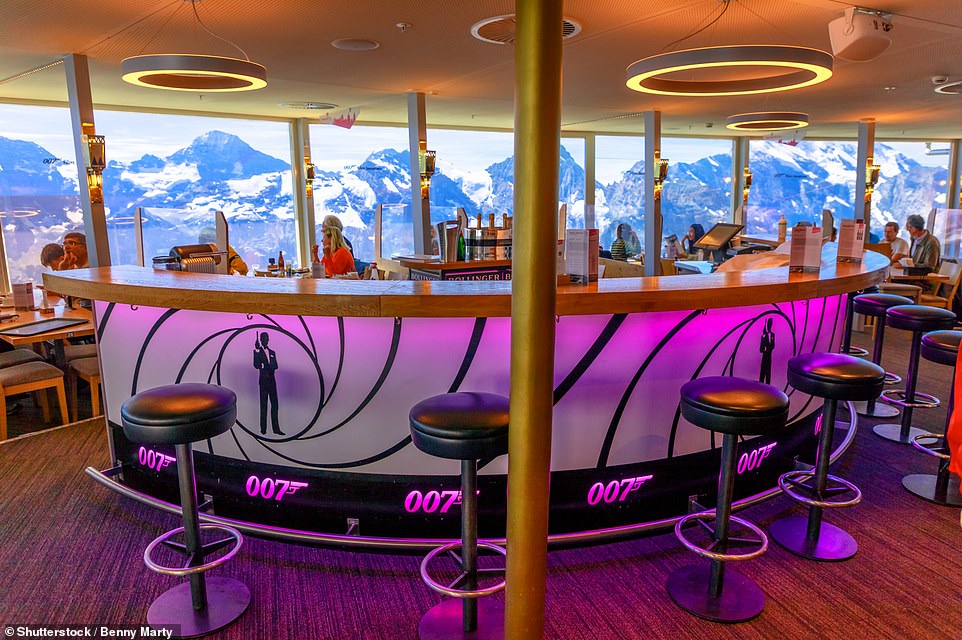 The revolving restaurant was blown to smithereens in the Bond movie On Her Majesty’s Secret Service. Pictured is the restaurant’s 007-themed bar counter 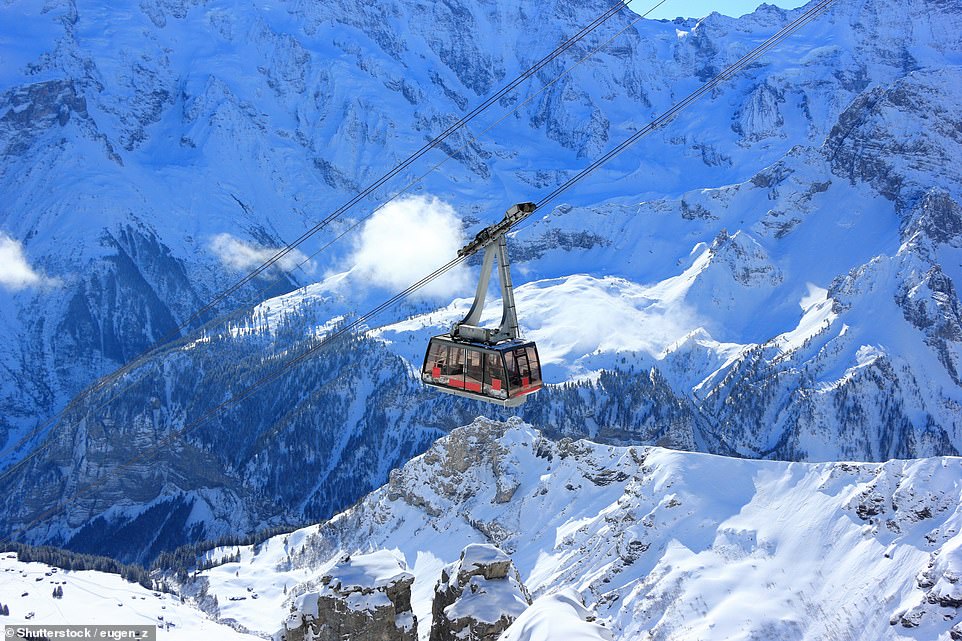 ‘The black run from the top of the Schilthorn is a must for anyone who fancies themselves as a decent skier,’ says Roger. Pictured is a cable car making the ascent up to the summit

The 360-degree Alpine landscape from the viewing deck is spectacular.

The black run from the top of the Schilthorn is a must for anyone who fancies themselves as a decent skier. It’s steep at the top, but thrilling.

There’s masses of touring and off-piste for the expert and a good range for the intermediate.

It’s a place that packs a big punch, and you’re never really going to ski it out in a week.

And don’t underestimate Swiss organisation. If you’re told the journey from Zurich airport means four trains, a cable car and another train, you might decide to give it a miss. Don’t.

It all works like clockwork and is stress free.

The snow will last until May, so give it a go. Murren will welcome you with open arms.

And I’ll bet you’ll be back next year.

Is this death-defying snap REALLY as scary as it looks?

I rode on Amtrak's Acela for the first time and while it wasn't the high-speed journey I expected, I can't wait to see what's next