Home » Travel » Could this be the new winter-sun destination for Britons?

Could this be the new winter-sun destination for Britons? Now you can get to Jordan for £100 as the cheap flight revolution hits Arabia

With spectacular archaeological treasures such as Petra and natural phenomena including the Dead Sea and Wadi Rum, Jordan has been a popular cultural destination for years.

But like other Middle Eastern destinations, it saw visitor numbers plunge during the turmoil of the Arab Spring, the rise of Islamic State and the Syrian war.

Now, with the launch of the UK’s first direct flight to the Red Sea city of Aqaba, the country could reclaim its tourism crown – and enjoy a new lease of life as a winter-sun destination for Britons. 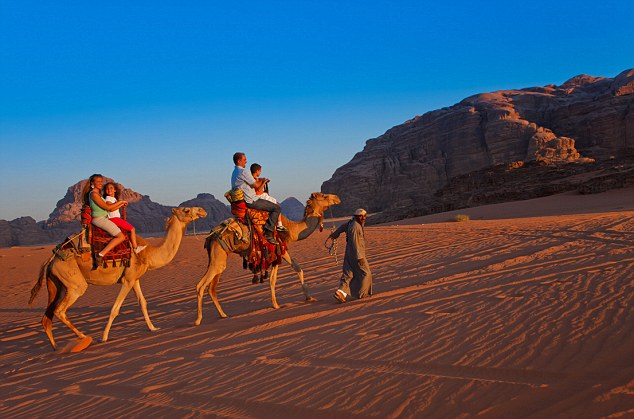 Aqaba, in the far south of the Hashemite Kingdom of Jordan, is an important commercial port and cruise-ship stop, and the transformation into full-on sunshine playground, which started about ten years ago, is in full swing. Agreed, it’s a bit of a building site in parts, but it’s all very exciting.

Take, for example, the extraordinary Ayla development (ayla.com.jo), just 200ft from the border with Israel and overlooking Eilat. A third of the size of Aqaba city itself, with man-made lagoons and beaches, phase one includes a Greg Norman-designed golf course – Jordan’s first and only championship course – that is already open. There’s a great beach club and wakeboard park, too.

The first of five new hotels, the 286-room Hyatt Regency, is due to open next month. Plans also include a marina and 87 shops. 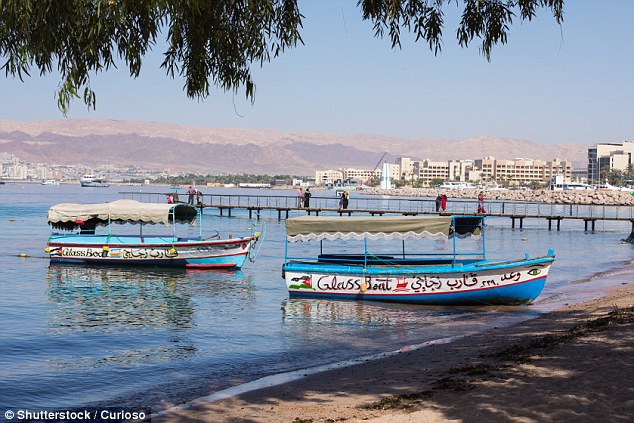 Exotic adventures: Try a glass-bottom boat trip from a beach in Aqaba

Ayla is not the only new opening. Saraya and Tala Bay resorts are well under way, and in the old city, established hotels are being spruced up ready for the anticipated influx of visitors.

The new weekly easyJet flights from Gatwick launch on November 10 and will run until March 23. Previously, to reach Aqaba you had to fly to Amman, the Jordanian capital, and take a four-hour drive or another flight.

Passengers are expected to snap up the new flights with prices from £99.78 one way. My return BA flight to Amman last week cost £1,133.

Aqaba’s King Hussein International Airport is small, so no hanging around for your luggage, and it’s a 20-minute drive to the city centre. It is also easier to reach two of the country’s main highlights – the old city of Petra carved out of the rock, and the extraordinary mountainous desert called Wadi Rum – from Aqaba than Amman. It’s also sunny in our winter, with temperatures of 21C to 28C and little rain.

There is, of course, an ever-present terror risk in the Middle East these days, but good hotels in Jordan all have strict security, and the Foreign Office says that about 70,000 Britons visited last year, with most trips being trouble-free.

Kempinski Hotel: Five-star chic, close to the old city and souks, with a kids’ club and an imported sand beach. kempinski.com

Mövenpick Tala Bay: Five-star with a great range of pools and facilities, but, as with much of Aqaba, a gritty beach. movenpick.com

Captain’s Hotel: Popular three- star among the shops and souks, with a swimming pool; there’s a sister camp at Wadi Rum, too. captains-jo.com

My Hotel: Informal three-star with a rooftop pool and access to a nearby hotel’s beach for a fee. myhotel-jordan.com

Where to eat and drink

The old city has the usual KFC, Burger King, Pizza Hut and McDonald’s. There’s a surprising number of liquor stores. Also in the old city there’s…

Fish Inn at the Kempinski: Treat yourself to the lobster dinner from £65pp and pair it with Jordanian wine, which is good – try Mount Nebo or Santa George.

At Ayla: Round up some friends for zarb, a succulent Bedouin-style lamb dinner baked underground; minimum ten people, from £55pp including drinks.

Tip: Enjoy a spectacular sunset from the terrace bar at the Movenpick Tala Bay. 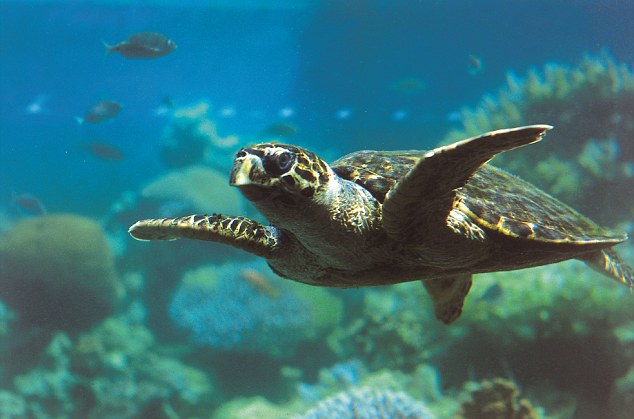 Diving heaven: The coral reefs of the Red Sea are full of exotic fish and turtles, above

Petra: The stunning Rose Red City of Petra carved out of the rock is about two hours’ drive away. Book a private guided excursion for three people. It will cost £55pp for entrance to the city, the all-day guide costs £110, and the car and driver £100 for a total of about £120pp. Or make friends with some other easyJetters and plan a group day-excursion in a shared minibus for six, which works out at about £95 each. Karma House Travel & Tourism (karmahousejordan.com) can organise these and other Aqaba activities.

Wadi Rum: An hour’s drive from Aqaba, the spectacular mountainous and multi-coloured desert was used as the location for the movie The Martian starring Matt Damon, who stayed at the Kempinski, Aqaba.

You can camel-trek for £16 per hour; climb or hike with a Bedouin guide (£38 an hour); take a sand buggy (£54 per hour); go on a sunrise hot-air balloon flight (£142pp for one hour); or take a Bedouin Jeep tour (£38 per Jeep) for two hours. It is worth overnighting at a camp for stupendous star-gazing, with dinner and breakfast thrown in. Depending on how plush the accommodation is, it will cost between £40 and £550.

Otherwise, try to time your visit for sunset at least – Karma offers a day excursion for two to four people for £160pp including transport, entrance, Jeep tour and water. With the launch of the UK’s first direct flight to Aqaba, pictured, Jordan could reclaim its tourism crown

Lawrence of Arabia: The story of T. E. Lawrence – aka Lawrence of Arabia – and his part in the Arab Revolt against the Turks can be found in and around Aqaba. Unfortunately, key sites such as Aqaba Museum, the house where Lawrence and Sharif Hussein Bin Ali, the Arab leader, met in 1917 and Aqaba Fort are currently closed for renovation.

Alternatively, pay to use a private beach club – Berenice Beach Club in Aqaba Marine Park has a handful of pools, a restaurant and all the trimmings. Its Sindbad Diving Club, sindbadjo.com, offers tuition and excursions. The Red Sea offers coral reefs teeming with marine life, including sea turtles, and Aqaba also has a sunken Hercules aircraft to explore. You can also book snorkelling, yachting, water-skiing, windsurfing, parasailing and glass-bottom boat trips (berenice.com.jo). 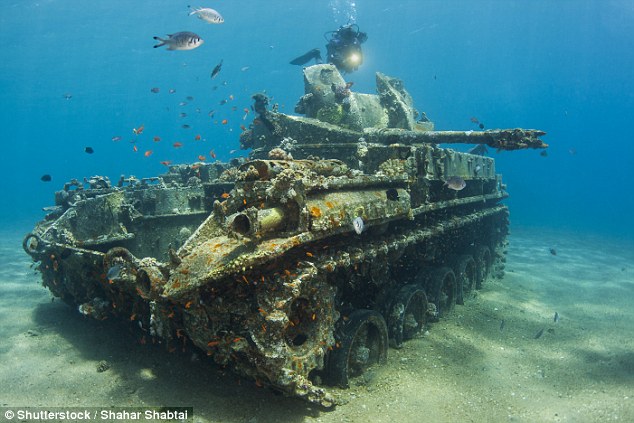 A diver explores an M42 tank off the coast of Aqaba. It has become home to hundreds of creatures

Tip: Seen one aquarium, seen them all, so don’t bother with Aqaba’s – go snorkelling instead, or walk on any pier and you’ll see fish galore.

Golf: Jordan’s first course is at the Ayla development. It’s all so green thanks to grass genetically modified to like the sunshine. Eighteen-hole green fees start at £82.

Spa: Movenpick Tala Bay and the Kempinski have lovely spas, but they are pricey. A Winter Clear-Out Scrub at the Kempinski costs £55 for 45 minutes. The local hammam, Bab Al Hara costs £30. Men only.

Many hotels put on music and even a belly-dancer once a week. Berenice offers a new excursion which includes a trip on the wooden boat Aladdin, dinner of fish grilled over an open fire, and oud music, for £40. Then you sail back to central Aqaba in the moonlight…

Base yourself in the old city area and you can walk to the souks. Aqaba has plenty of taxis and they’re not too expensive – about £20 from the centre to the airport. It’s not worth renting a car for the week if you’re largely going to fly ’n’ flop; hire one for a day if you fancy driving to Petra, though.

Bring back: Spices and incense from Al Baba, next to the fruit and vegetable market in Zahran Street in the old city; Dead Sea products from Mina Bazaar, Al-Nahda Street; perfume from Abu Khaff near the Sharif Hussein bin Ali Mosque. It can mix a fragrance for you from £10 for a small bottle – any similarity to Chanel Bleu, Black Opium or Miss Dior is purely coincidental. 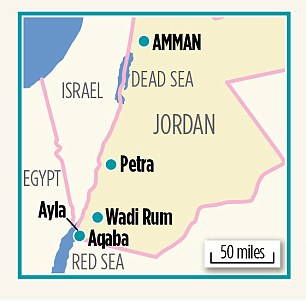 Is Jordan safe? At no time did I feel threatened or uncomfortable. As mentioned, all good hotels have extra security. However, according to the Foreign Office there have been reports of harassment and sexual assault, so female visitors should take care travelling alone. They also recommend that, if you want a taxi, ask your hotel to recommend a reliable driver, and advise that women should never ride in the front.

Do British citizens need a visa? The visa is free if you come through Aqaba Airport.

Does it matter if you have an Israeli stamp in your passport? No, unless you’re planning to visit Saudi Arabia (ask them to stamp a separate piece of paper).

Is it OK to drive? Yes, the main roads are good. You can drive in Jordan using an International Driving Permit. Make sure you have third party insurance as, in Jordan, a driver is always considered guilty if they hit a pedestrian.

How do I keep in touch? Wi-fi is everywhere and free.

Anything else? You can drink alcohol in bars, clubs, hotels and private homes but not on the street.

The best hotels in Blackpool

Virgin Voyages’ Scarlet Lady first look: A sleek high-energy cruise like no other

Best Irish Breakfast revealed – 'It's beyond great', our readers say