Spain is battling a jellyfish invasion as the sea-creatures hit the country’s beaches, posing a threat to UK holidaymakers. This month, Express.co.uk reported how the Mediterranean country remains the most popular for Britons craving a sun-soaked, short-haul break. Yet images showing the impact caused by the Portuguese man o’ war, a creature found in the warm seas, might cause some concern. Despite their name, the creatures are not actually jellyfish – they are instead classed as marine hydrozoan.

When floating, they are 12 inches long, five inches wide and have imposing tentacles measuring up to 165 feet long.

They are often found in groups of 1,000 or more, proving pretty imposing for those taking a paddle or wading out for a swim in deeper waters.

One particular incident saw a woman treated for stings on her arms and face in Alicante.

According to the Sun, she suffered a swollen face and arm after coming into contact with a Man O’War while in the sea 200m from the shore of Cala Cantalar.

Images today show a female with red, painful-looking marks spanning her shoulders and back after coming into contact with the creature. 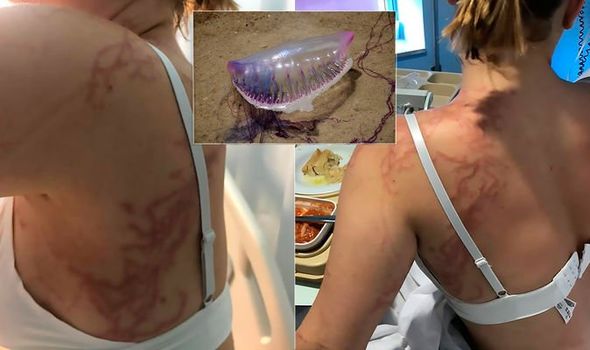 The reddish marks, which look like strands of burns, also affected her arm, which was plastered up.

The victim was also on a drip while sitting in her hospital bed.

Some people find themselves allergic to the stings after being targeted, which could drastically worsen the situation and prove potentially fatal.

Spanish news site Information said beaches in Spain were being patrolled every day to clear the Man O War.

They are believed to be moving from their usual breeding grounds to tourist hotspots including Alicante and Benidorm. 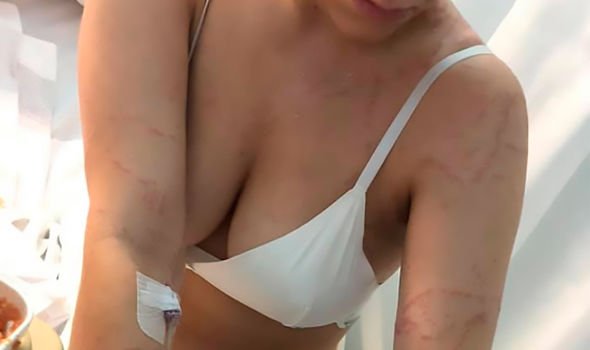 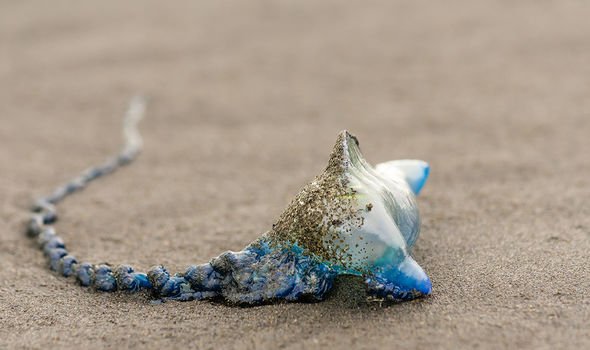 Last year, beaches at Benidorm and Alicante were closed with red flags raised after unwanted jellyfish made their presence known.

A statement released by Altea Town Hall at the time, said: “The presence of dangerous jellyfish has been detected on beaches throughout the municipality.

“That’s why from April 24 and until further notice, we have decided to ban people from going in the sea as a precaution.

“The red flag will be up for public safety.”

A spokesperson for the Aula del Mar marine museum in Malaga said even when dead, the sea creatures were a risk.

He said: “We urge people not to touch the animals as they can still sting when stranded or dead, and the stings can be extremely severe.

“The tentacles can become detached and these are also still capable of stinging.

“Animals and children are particularly at risk.”

The NHS has offered advice to Britons who believe they have been stung by a jellyfish.

It states: “Get help if possible. Ask a lifeguard or someone with first aid training for help.

“Rinse the affected area with seawater (not fresh water) and remove any spines from the skin using tweezers or the edge of a bank card.

“Soak the area in very warm water (as hot as can be tolerated) for at least 30 minutes – use hot flannels or towels if you cannot soak it.

Meanwhile, contrary to popular belief, it insists sufferers should not urinate on the sting.

The Four Seasons Houston shows off its makeover: Travel Weekly

Revealed: the global journeys of Hajj pilgrims to Saudi Arabia