Home » Travel » British mini-break: Book a stay in one of these 14 grand houses

The hosts with perfect manors: Give your British mini-break some real style and book a stay in one of these 14 grand houses

Whether, like Plumber Manor in Dorset, they’ve been owned by the same family for hundreds of years or are a cherished new project such as Caer Beris in Wales, manor hotels have a family at their hearts.

Packed with history, these hotels pride themselves on delightfully old-fashioned hospitality with generous meals, antique furniture, gardens to wander in and countryside to admire.

There are famous ones, including Le Manoir aux Quat’Saisons, and Gravetye and Cowley Manors, but there are plenty of others to discover, and some of them have superb deals this year. 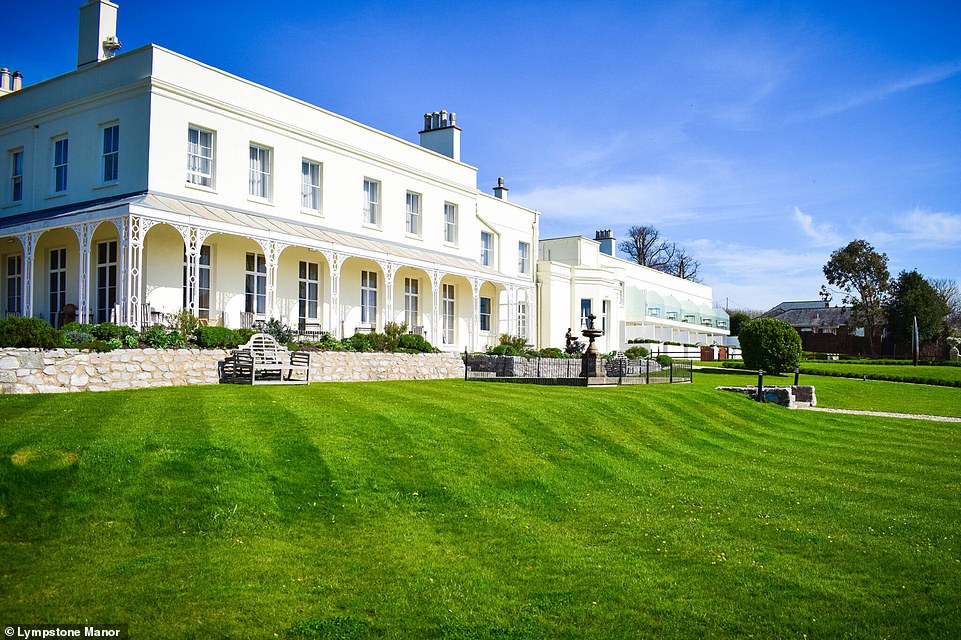 Lympstone Manor in Devon has a Michelin-starred restaurant and 21 bedrooms in the main house, with high levels of indulgence that include a resident artist and a vista of the River Exe 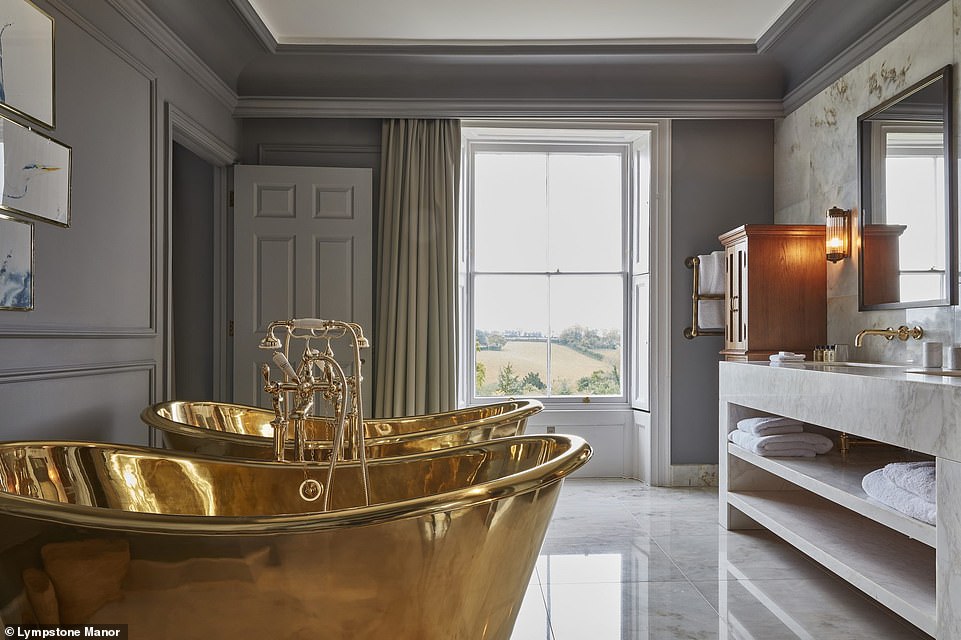 Stunning: Pictured is one of the bathrooms at Lympstone Manor, which features two freestanding gold baths and a marble double sink

When chef Michael Caines bought this Regency mansion near Exmouth in 2017, part of the appeal was the surrounding farmland which he thought would make an ideal terroir for English sparkling wine. More than 17,000 vines were planted, and the first vintage is due in 2021.

In the meantime, there’s a Michelin-starred restaurant and 21 bedrooms in the main house, with high levels of indulgence that include a resident artist and a vista of the River Exe.

New this year are equally luxurious shepherd’s huts that sleep up to five guests. Doubles from £560, including breakfast and lunch (lympstonemanor.co.uk). 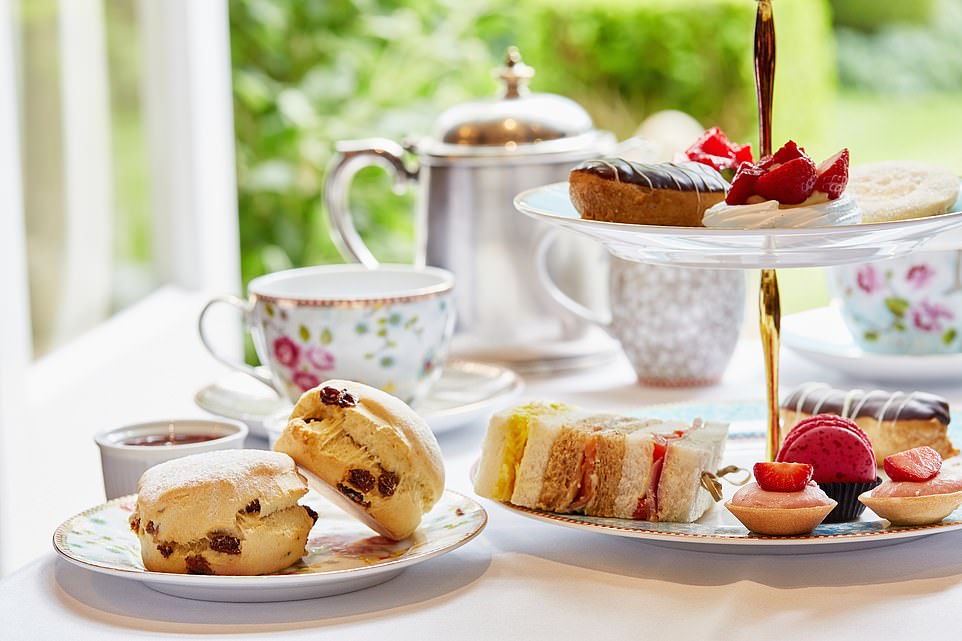 Tucked into the countryside near the South Downs, next to the boutique-filled village of Cuckfield, parts of this mansion date from the 16th Century. If you want to delve into the oldest part of the hotel, ask for the Master Timothy suite, which has wooden panelling, reading nooks and an adjacent room for children. Downstairs is given over to a bar, drawing rooms and a restaurant which overlooks a semi-wild garden; its wine list reflects the burgeoning Sussex vineyard scene.

The former walled garden now houses a spa with an indoor and outdoor swimming pool; there are also a handful of suites, allowing guests to drift between their rooms and treatments.

One-night Spa Break Getaway costs from £143pp for dinner, B&B with £25 voucher towards a spa treatment from Monday to Friday (prideofbritainhotels.com). 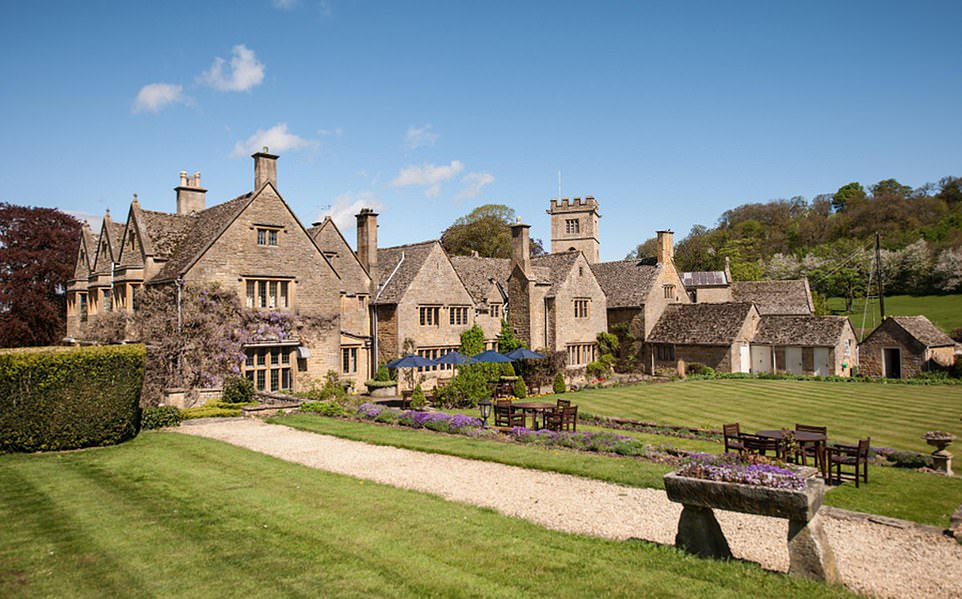 Chef Will Guthrie raids the nearby Vale of Evesham for produce both in the restaurant and for hampers to take on picnics around Buckland Manor, pictured, and beyond 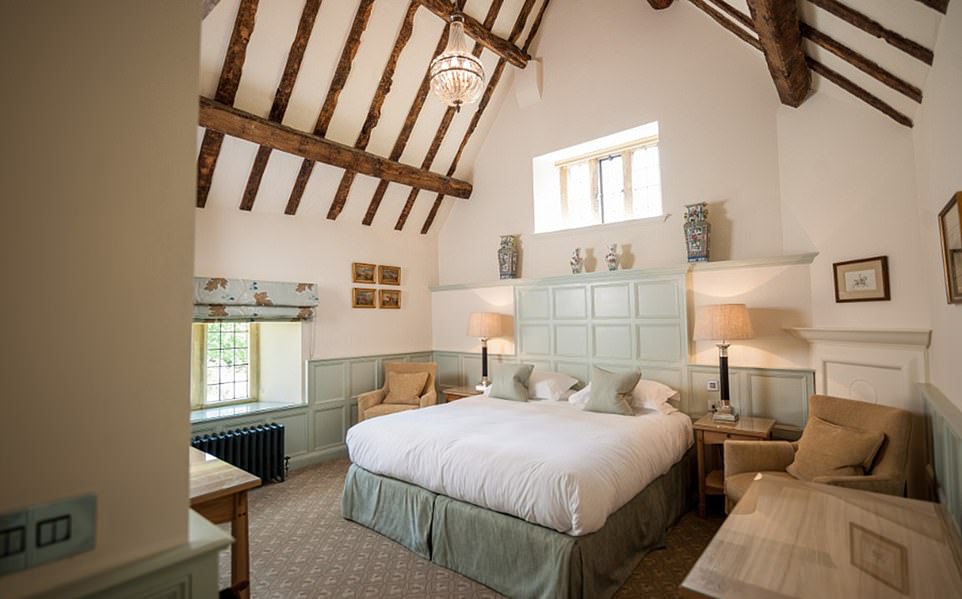 There are 15 rooms at Buckland Manor, some of them with four-poster beds and views of church spires. Distinctly more family-friendly than many Cotswolds hotels, there are interconnecting rooms as well as special menus for children 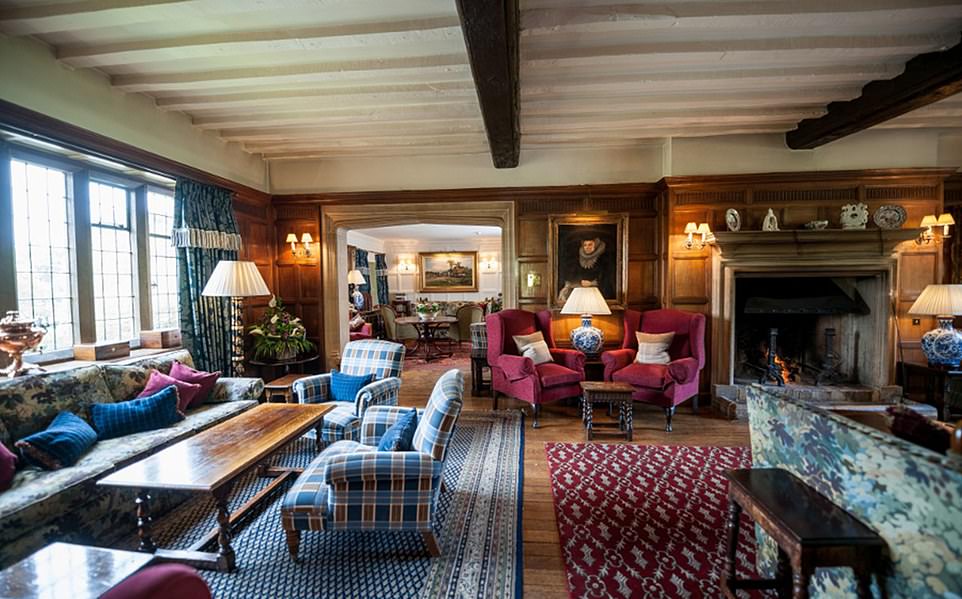 A manor house with Domesday Book history and plenty of modern-day appeal. The 15th Century timbered hall provides the backdrop for afternoon tea in winter, although in summer it spreads out into the gardens.

The beautiful village of Broadway is a gentle hike away, so are the gardens at Snowshill. There are 15 rooms, some of them with four-poster beds and views of church spires. Distinctly more family-friendly than many Cotswolds hotels, there are interconnecting rooms as well as special menus for children.

Chef Will Guthrie raids the nearby Vale of Evesham for produce both in the restaurant and for hampers to take on picnics around the hotel and beyond.

Two-night stays from £315pp, including B&B plus one dinner and a National Trust card worth £127 (bucklandmanor.co.uk). 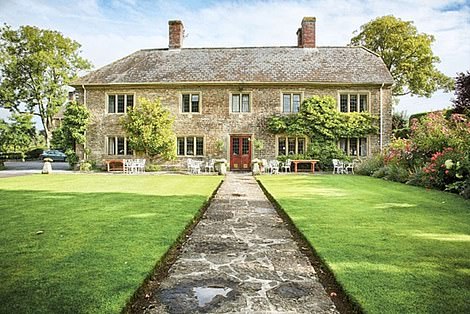 A textbook West Country manor house, from the long driveway surrounded by fields to the mullion windows framed by roses.

Generations of the Prideaux-Brune family have lived at Plumber since they built it in the 1600s and it shows, with resident black labradors, proper family portraits and a collection of classic cars.

There are six bedrooms in the main house, ten others in a restored stone barn. 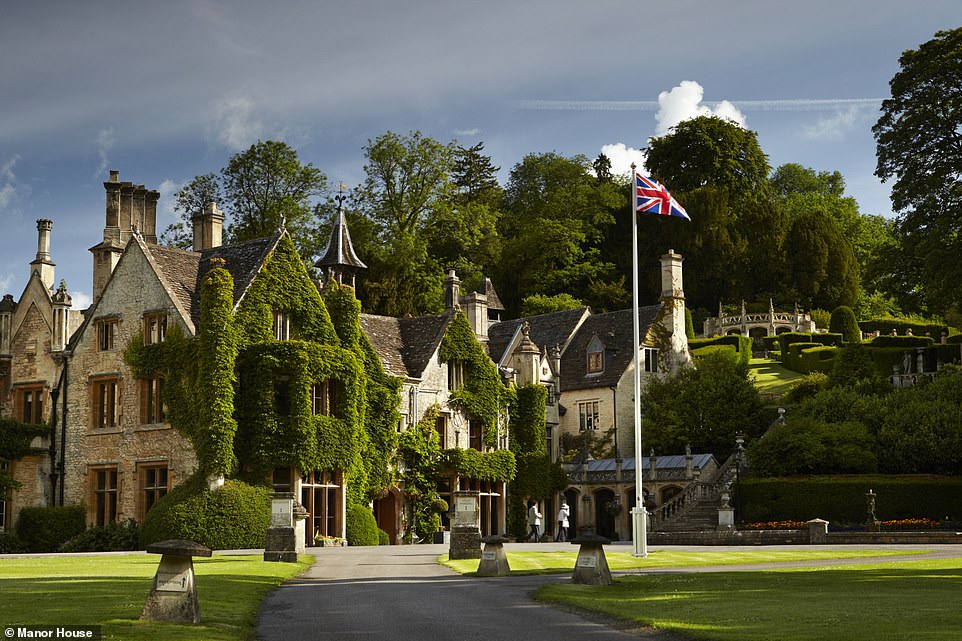 The 14th Century ivy-clad Manor House in Wiltshire, which is filled with stained-glass windows, beams and a Michelin-starred restaurant 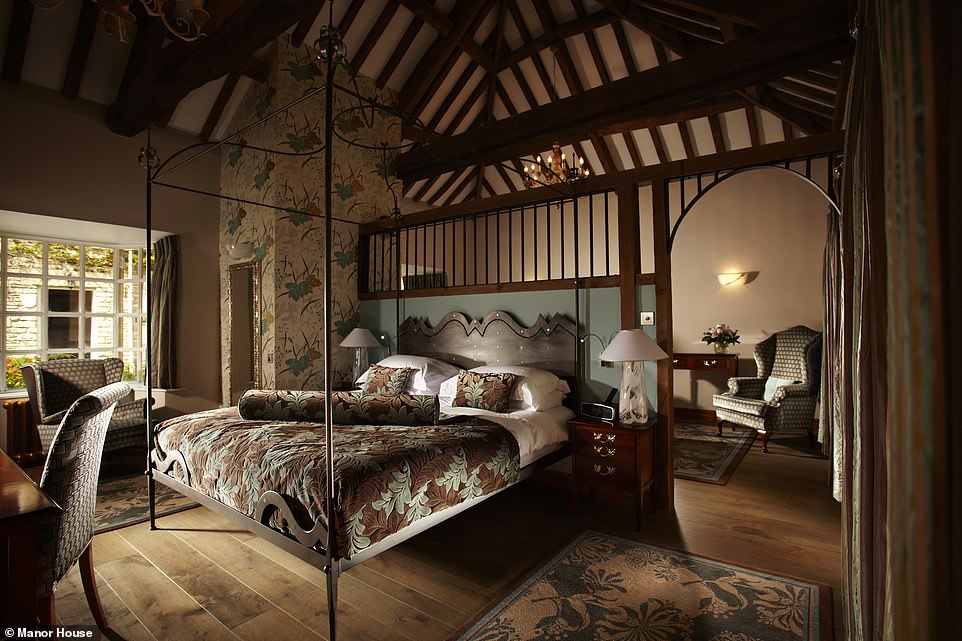 There are 21 rooms in the main house and 29 cottages around the grounds of Manor House, some of which are dog-friendly

With its charming honey-stoned houses, Castle Combe is often described as England’s most beautiful village, and it has caught the eye of many a Hollywood director.

It has a 14th Century ivy-clad manor house – in the same honey-coloured stone to match – filled with stained-glass windows, beams and a Michelin-starred restaurant. There are 21 rooms, including the delightful Lordsmeer suite in the main house and 29 cottages around the grounds, some of which are dog-friendly.

There’s an 18-hole golf course and a glorious Italianate garden, and the Bybrook river meanders through the grounds. B&B doubles from £250 (exclusive.co.uk/the-manor-house).

A hotel that catches the posh but gently boho North Norfolk vibe beautifully; this Victorian building is too close to the beach to have any airs and graces, but there’s a lot of breezy charm. Meals are served in an expansive conservatory and there are 26 rooms, some with hot tubs.

Owned by the Snaith family, it is managed by their son Eric, who also runs Norfolk’s smartest fish and chip shop in nearby Thornham. Family-friendly, it’s also a stylish bolthole for birdwatchers; there’s an RSPB reserve next door.

B&B from £140. A two-night walking break including dinner, B&B plus a packed lunch on one day costs from £265pp (titchwellmanor.com). 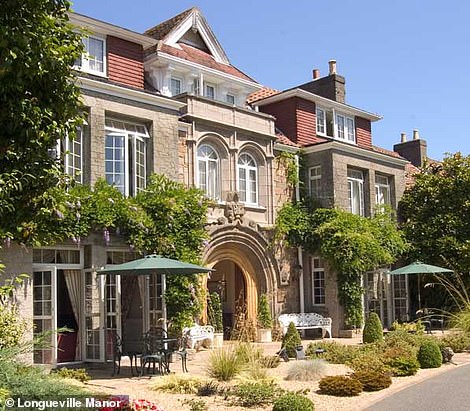 Longueville Manor, Jersey, puts food and wine at the centre of its appeal

This Relais & Châteaux hotel may put food and wine at the centre of its appeal, but there’s much more on offer.

The 30 rooms and suites are cream and serene, generously sized and with French-accented luxury.

For extra privacy, there’s a two-bedroom cottage in the grounds, alongside tennis courts and a spa.

The hotel also has its own yacht.

Longueville became a hotel in 1949 and is now in the third generation of family ownership.

There’s a fine cellar, with more than 5,000 bottles, a forager on staff to supplement the extensive kitchen garden and honey from hives dotted around the grounds. 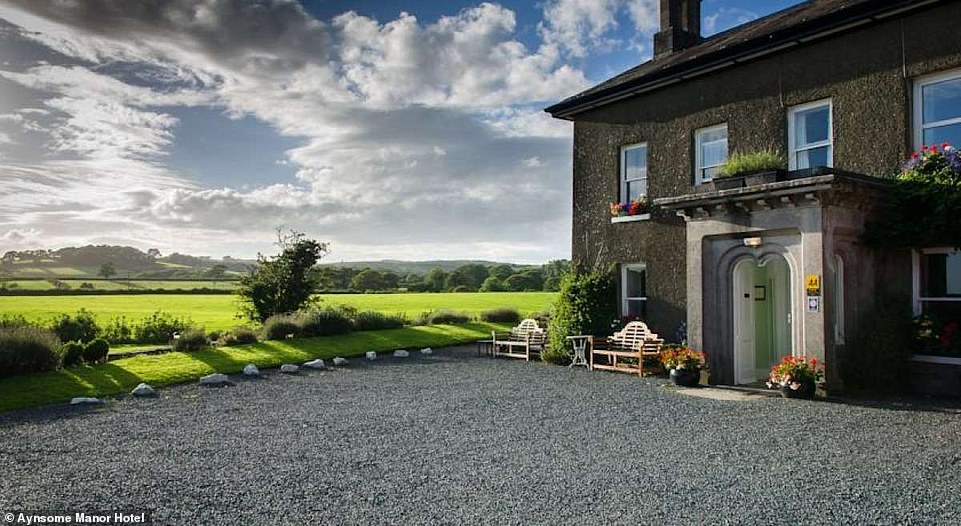 Aynsome Manor Hotel, Cumbria, has 13 bedrooms, some in the beamed eaves of the building, all with the sort of views that will have you pulling on your walking boots

For those who like the wilder side of Cumbria, here is a handsome, good-value manor near Cartmel, now run by the second generation of the Varley family.

There are just 13 bedrooms, some in the beamed eaves of the building, all with the sort of views that will have you pulling on your walking boots. Guests eat in the dining room rather than a restaurant and the food aims to make the flavours sing with minimal fuss.

The menus are set-price and a bargain at three courses for £30. B&B from £90 per night (aynsomemanorhotel.co.uk). 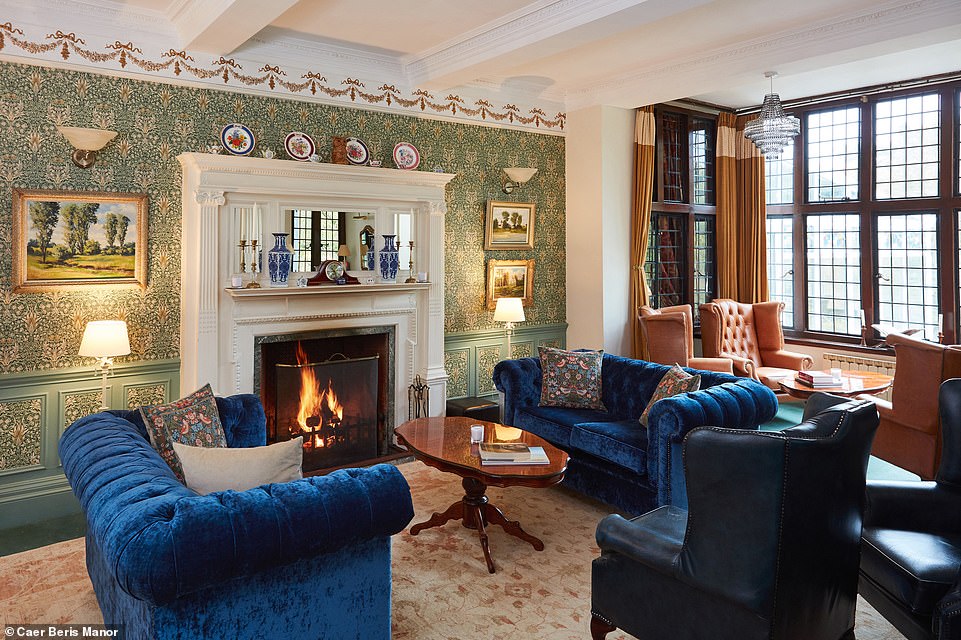 Lord Swansea built this mock-Tudor mansion, surrounded on three sides by the River Irfon, in 1896 on the foundations of a 13th Century castle. It was bought by the Southwick family last year.

There are 22 rooms spread across the estate, ranging from suites to single rooms. The family spent lockdown continuing their renovation programme and have created picnic areas throughout the grounds, which also hold orchards and an otter hide, while there’s trout, salmon and grayling to fish for. 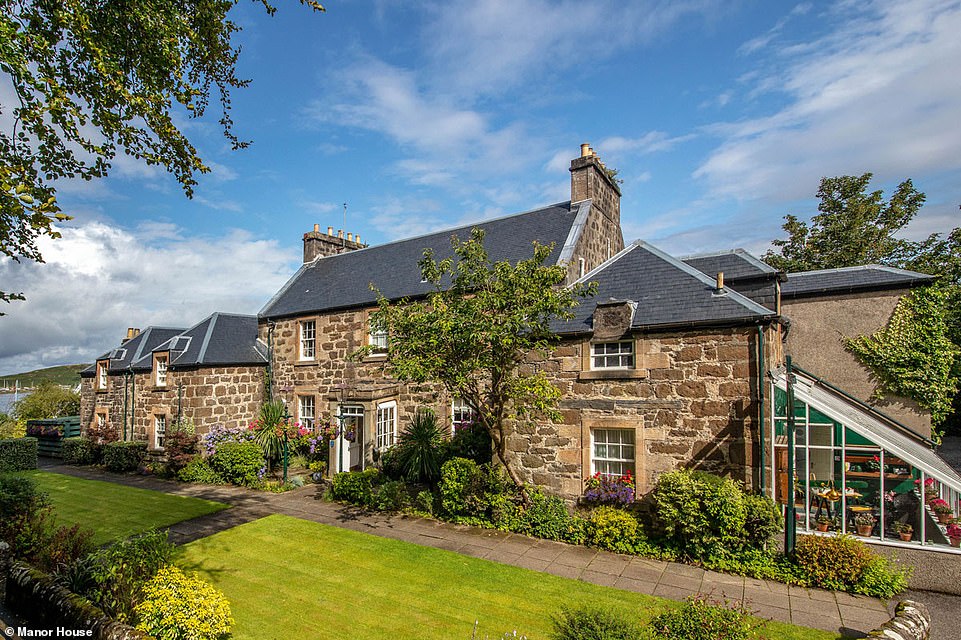 The Scots don’t do manors in quite the same way as the English – fortified castles were more their thing.

This hotel is one of the exceptions, and it’s delightfully gentle with just 11 rooms and spectacular West Coast views.

It was built for the Duke of Argyll in 1780, next to Oban’s harbour. Staying here is a superb introduction to the Inner Hebrides, from the freshly caught seafood in the restaurant to sunset views from McCaig’s Tower behind the hotel – although watching from the Nelson bar at the hotel with a fine whisky in hand is nearly as good. Sailors can use the hotel’s own mooring. Double B&B from £224 (manorhouseoban.com).

The Manor at Sway, Hampshire 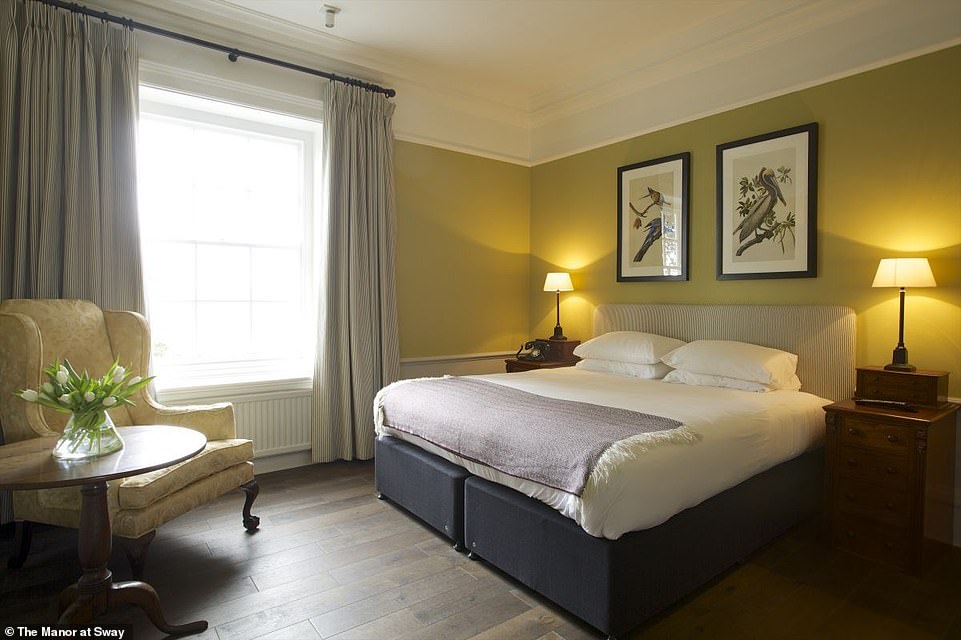 Pictured is one of the bedrooms at The Manor at Sway, Hampshire, where ‘William Morris mixes with a touch of modern design’

All the space and grace that the Edwardians could muster comes into play at this hotel on the southern edge of the New Forest, where William Morris mixes with a touch of modern design. It’s a great car-free option as it’s near the railway station and there are wonderful walks into the forest and heath to explore from the hotel.

There are just 11 bedrooms and a restaurant serving local produce. Dishes include local pork with black pudding, crisp ham and charred baby gem lettuce, while puddings include lemon curd tart with basil.

Doubles from £189, including dinner, breakfast and afternoon tea (themanoratsway.com). 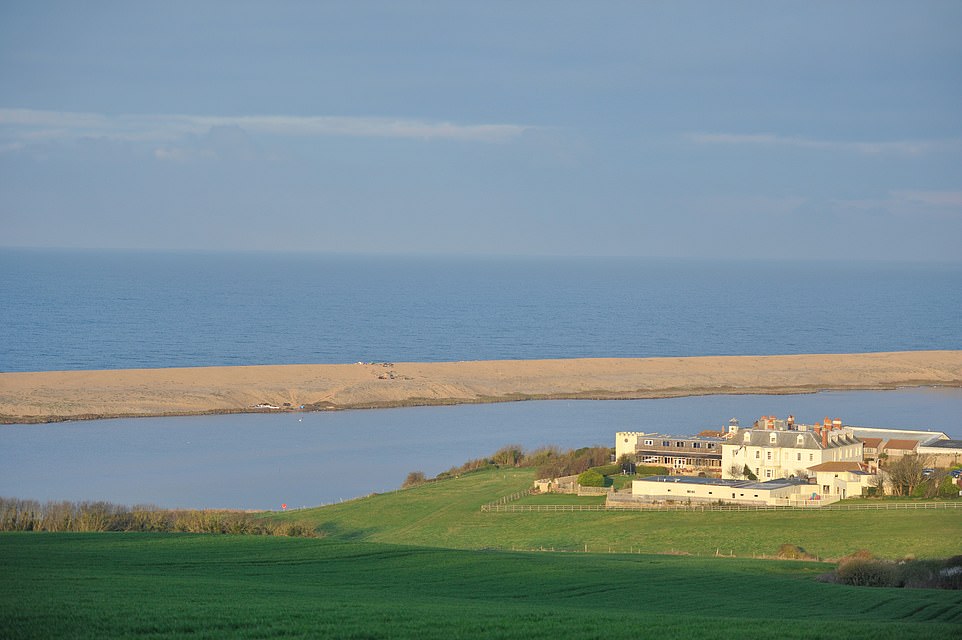 Room with a view: Moonfleet Manor, a Georgian mansion in Dorset, overlooks the magnificent Chesil Beach 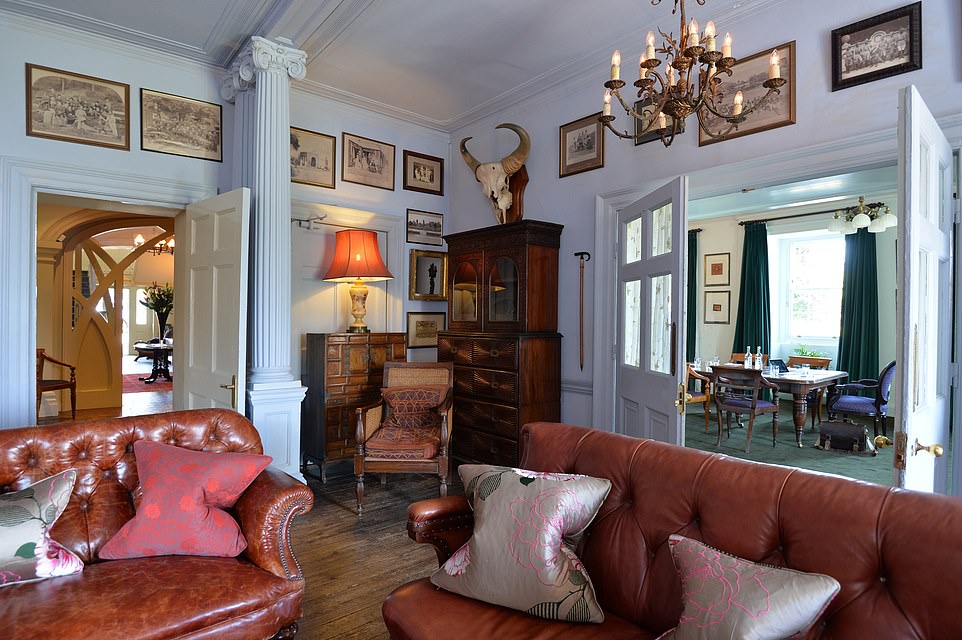 Not just for adults: One of the lounges at the hotel, which is child-focused, with play areas and picnics

If you want to get your child manored up, head here. Overlooking Chesil Beach and part of the Luxury Family Hotel group, it’s thoroughly child-focused. There are interconnecting rooms, indoor and outdoor play areas, including a pool, and in a Covid-made-fun way, picnics are available for every meal including breakfast. The South West Coastal Path runs alongside the back garden.

In the Georgian mansion, there’s a playfulness that adults will appreciate too, with high teas and grown-up meals and, above all, Snoopy, the venerable hotel spaniel.

Two nights from £329, including breakfast and dinner for two. Children stay free but are charged for meals; two hours of childcare a day is included from September 7 when the creche reopens (moonfleetmanorhotel.co.uk). 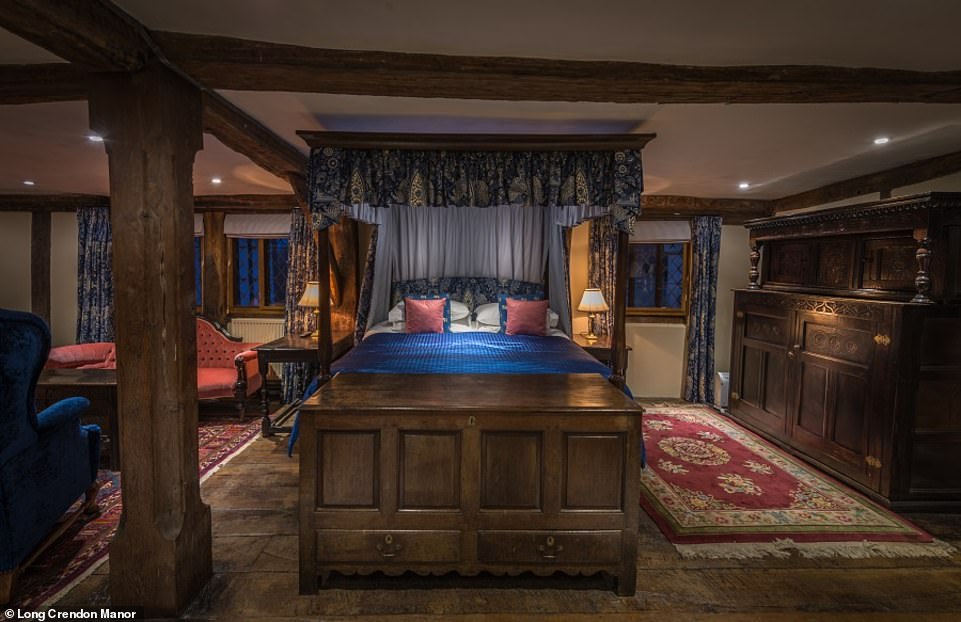 Long Crendon Manor in Buckinghamshire has bedrooms with original features, a bakery, farm shop and florist

Not a hotel as such, but you can stay in this manor, which is stacked with beamed charm. Parts of the main house date from the 12th Century.

It’s still a working estate, with ducks and geese in the orchard that creates the cider, and Gloucester Old Spot pigs that provide the morning bacon.

Head into the courtyard and there’s a bakery, farm shop and florist. The farm shop cafe serves lunch and it’s walking distance from two pubs in the village. B&B doubles from £145 (longcrendonmanor.co.uk).

This small foodie hotel in the heart of the Lake District is owned by Jamie and Jenna Shail, who have bought significant flair and rolltop baths to the low-slung white house near Ambleside.

Eight of the rooms on the ground floor are dog-friendly; first-floor rooms have balconies.

Its main restaurant has three AA rosettes and five courses start from £70 a head, but there’s also a more casual restaurant. B&B from £221 (rothaymanor.co.uk).