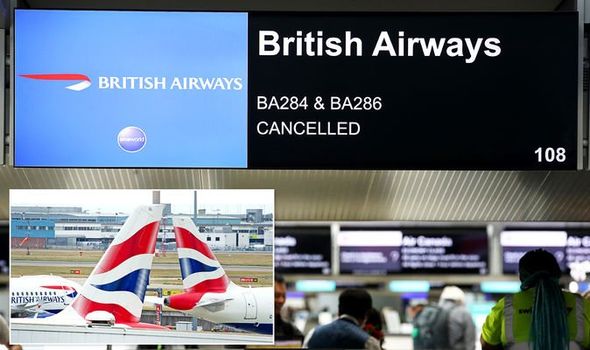 British Airways flights continue to be cancelled today as the aftershocks of the pilot strikes are felt. BA pilots walked out on Monday and Tuesday for the first time in the airline’s history in an ongoing dispute over pay. The strike resulted in over 1,700 flights being cancelled and around 195,000 passengers affected. Travel chaos is set to continue this week, however as British Airways warns of a “knock-on effect” from the industrial action.

BA has said that nearly 150 aircraft and 700 pilots were in “the wrong place” this morning while 4,000 members of cabin crew have had disruption to their rosters.

Many flight attendants will be unable to work again for several days due to legal rest requirements.

British Airways said in a statement: “BALPA, the pilots’ union regrettably went ahead with strike action on 9 and 10 September, which resulted in a large number of flight cancellations, for which we are very sorry.

“Unfortunately, with no detail from BALPA on which pilots would strike on September 9 and 10, we had no way of predicting how many pilots might come to work or which aircraft they were qualified to fly. We had no option but to cancel the vast majority of our flights on these dates.

“We are working hard to get back to normal and to get our customers to their destinations. The nature of our highly complex, global operation means that it will take some time to get back to a completely normal flight schedule so there will be a knock-on effect over the next few days.

“We are offering all affected customers full refunds or the option to re-book to another date of travel or an alternative airline.” 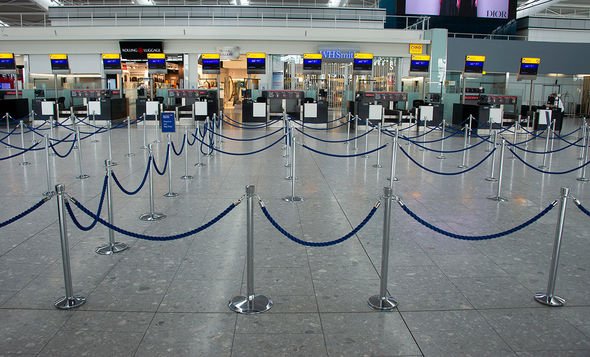 A BA spokeswoman told Express.co.uk: “We plan to fly more than 90 per cent of our flights today.”

However, almost 20 British Airways departures have been grounded from London airports today between 6am and 1pm, while 31 arrivals have been cancelled.

Balpa called the strike “a powerful demonstration of the strength of feeling of BA pilots.”

BALPA General Secretary, Brian Strutton, said: “Surely any reasonable employer would listen to such a clear message, stop threatening and bullying, and start working towards finding a solution.”

Passengers have taken to social media to complain about the disruption to their travel this week. 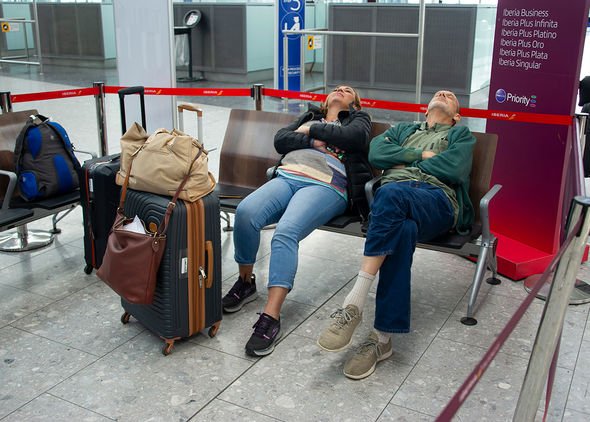 “@British_Airways After cancelling, then uncancelling my flight on Sept 11, I just received an email saying my flight was cancelled again. And to add insult to injury, your French customer service doesn’t work after 5:30 PM. How am I supposed to rebook my flight? #BritishAirways (sic),” one BA customer posted on Twitter.

“About 3wks ago @British_Airways cancelled my flight tomorrow to Paris. Today they emailed me to say they had re-cancelled it – hilarious. All because pilots on £100K per year want profit sharing. Hhhhmmm, glad I’ve booked with @easyJet #britishairwaysstrike (sic),” another flier tweeted.

Another British Airways pilot strike is due to take place on 27 September. BA has said they will contact affected passengers as soon as they can.

Despite stringent laws protecting passengers and allowing them to claim compensation, BA passengers cannot claim money back this time.

This is because British Airways cancelled flights more than 14 days in advance, and as such are not liable.

Explaining the rules, Nicky Kelvin from The Points Guy said: “You may be aware of EU261 rights for delayed or cancelled British Airways flights, which are surprisingly easy to claim online. Because British Airways cancelled all of these flights more than 14 days in advance of the date of the flight, EU261 compensation is not payable.”

Flights: Shock as passenger carries out smelly procedure on plane