British Airways passengers have been left stranded at airports across the United States after a ‘technical’ glitch caused long-haul flights to be delayed and cancelled just days before Christmas.

The airline has apologized after the issue caused multiple planes in the United States to be grounded before take off on Monday night, infuriating weary travelers, some of whom were told they’d be waiting 20 hours for a flight.

Some reported being held on the tarmac for hours while cabin crew and pilots were left waiting on flight plans to get them to their destinations.

In video footage from New York’s JFK airport, holidaymakers could be seen lying on the floor as they waited for updates, while others appeared visibly tired.

HAS YOUR FLIGHT BEEN AFFECTED BY THE ‘TECHNICAL’ GLITCH? Email [email protected] 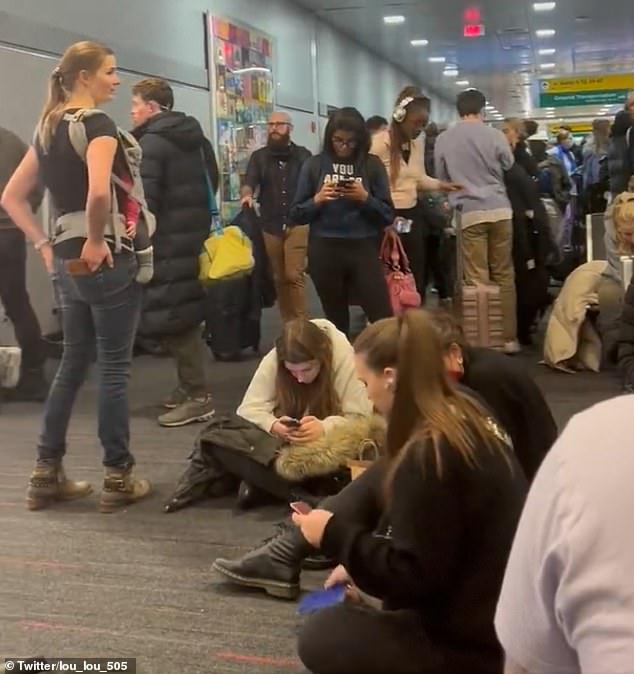 In video footage from New York’s JFK airport, holidaymakers could be seen lying on the floor as they waited for updates, while others appeared visibly tired

The technical issue caused massive delays to flights from the UK’s flagship airline, stranding passengers as at least nine long-haul flights to Heathrow were cancelled last night and this morning.

Several other flights suffered long delays, including one from the US city of Philadelphia which is expected to land more than five-and-a-half hours behind schedule.

Among those caught in the chaos was actress Elizabeth Hurley, who tweeted she was left ‘stranded at Antigua airport’ after her flight was ‘delayed for 20 hours’.

Others trying to catch flights reported being left waiting on the tarmac at New York’s JFK airport for more than four hours, with delays also reported in Toronto, Vancouver, Boston, Phoenix, Miami and Denver.

Some were left forlornly looking at their planes as they were stuck on the tarmac, while other said that they were given limited or not information from BA staff.

Passenger Tin Fenton said that he had been delayed in Vancouver for four hours.

‘Now 1am should have flown at 9:05pm. Mostly caused by IT outage and now the weather has worsened. No one seems to have a clue what’s happening,’ he wrote on Twitter.

Another traveler said that they were ‘stuck in Phoenix with a two hour (and counting) delay and no explanation’.

Others complained of a lack of food, water, and the value of vouchers given out to help people while they were in the airport. 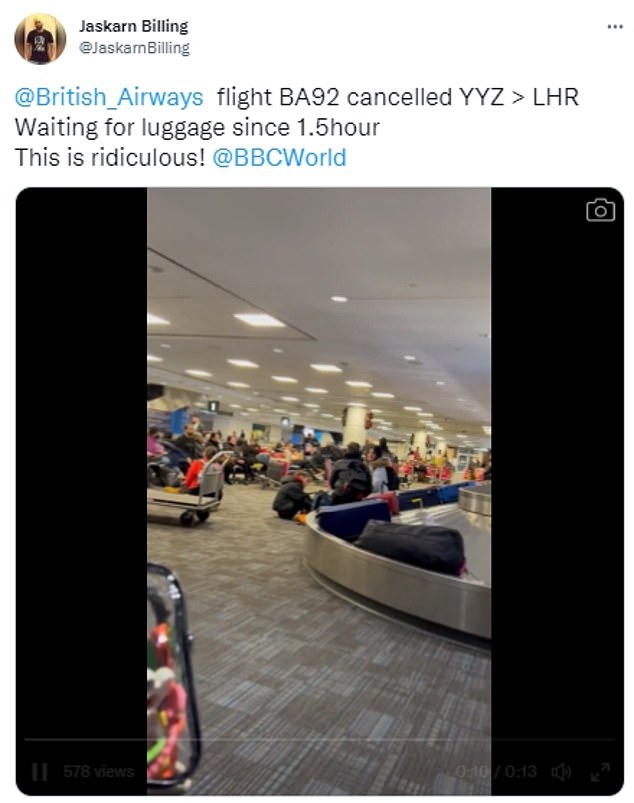 By Tuesday morning, British Airways said that it had resolved the temporary issue

Author Colin Dickey said on Twitter: ‘Captain of our British Airways flight just said that their flight computers have been down for two hours worldwide and no BA plane can file a flight plan? Seems not ideal. Anyway just chillin’ on the tarmac here at JFK, being cool.’

He added: ‘British Airways’ system has been down worldwide for 3 hours now; Captain said the last time this happened (earlier this year, wtf), it took 2-3 hours once the system came back online. (Putting this all here so other people stranded can find it, in case it’s helpful for them).’

He later tweeted that the airline had ‘borrowed’ a flight computer from Lufthansa, with his flight taking off more than four hours after it was scheduled to. 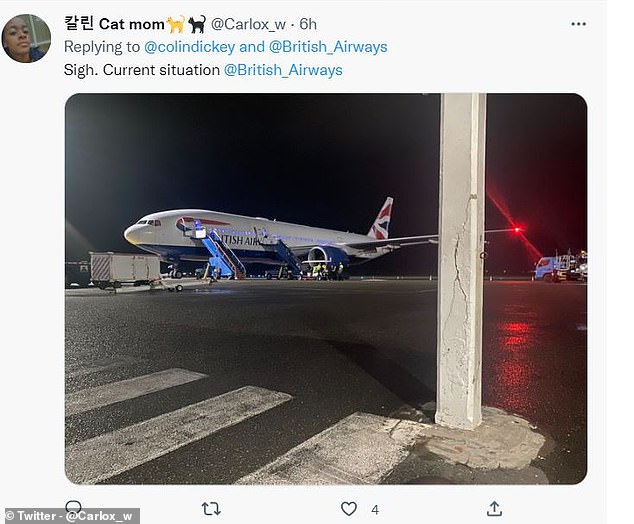 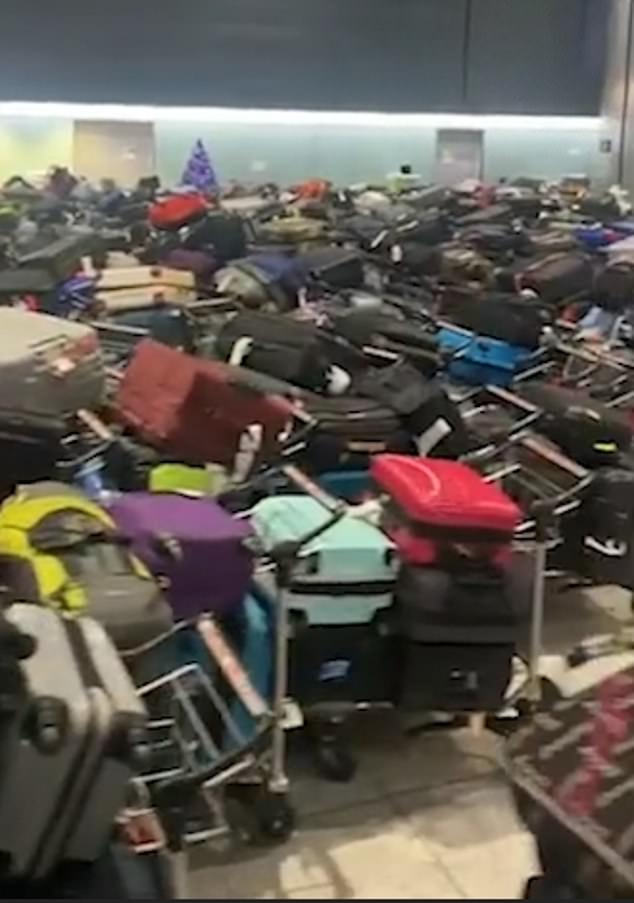 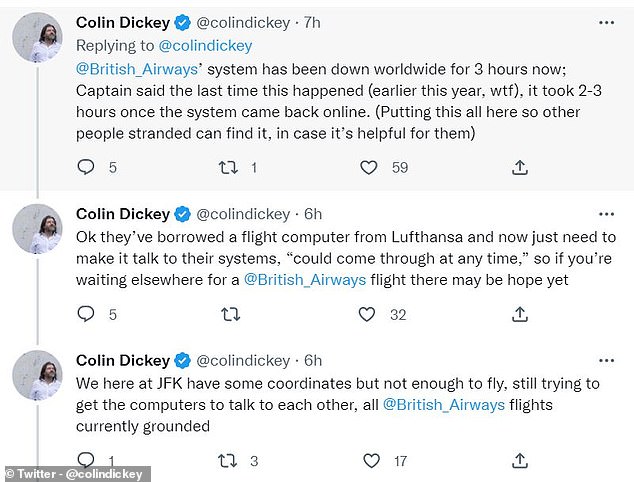 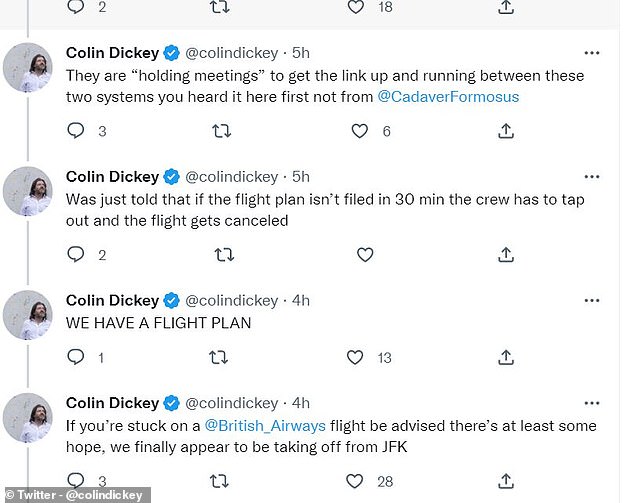 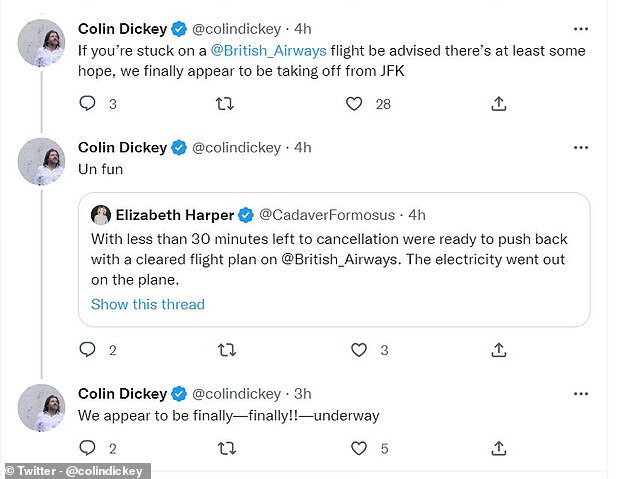 There were also delays for passengers arriving into Terminal 5 at London Heathrow last night, with from inside the terminal shows hundreds of suitcases piled up high in the baggage reclaim hall.

Lorna Bryant, who arrived into the airport last night, told MailOnline the situation was a ‘nightmare’.

She said there were ‘hundreds, if not thousands, of suitcases dumped in a pile, unattended, awaiting staff to load them onto the conveyor belts’.

‘We have just been informed that baggage delays are expected to more than 90 minutes,’ she said.

‘We also had delays when we landed. The pilot explained that there were no staff ready to assist them in parking the plane. No shuttle buses ready to take us to the terminal, either.’

She added there seemed to be ‘absolutely no staff,’ and that ‘the pilot even suggested we leave a bad review because they’re sick of the delays every time they land at Heathrow’.

In a statement, BA said: ‘Our flights due to depart the USA tonight are currently delayed due to a technical issue with our third-party flight planning supplier, which we are urgently investigating.

‘We’re sorry for any disruption this will cause to our customers’ plans, our aim is for these flights to depart as quickly as possible.’

‘This is not a safety issue. We are keeping our customers up to date and providing them with refreshments,’ the airline added.

In a statement issued later in the night, it said: ‘Our teams have now resolved a temporary issue that affected some of our long-haul flight planning systems overnight, which resulted in delays to our schedule.

‘We’re sorry for the disruption caused to our customers’ travel plans.’

BA has been contacted for comment about the delays at Terminal 5.

It's lights on! for Vivid Sydney ·