British Airways has made an order for up to 42 new Boeing 777 jets with a ‘substantial discount’ off the total list price of £14billion.

The British flag carrier’s parent company IAG confirmed it would purchase 18 777-9 fuel efficient planes made by the US aircraft manufacturer with an option for a further 24 aircraft.

The company has not disclosed the exact cost of the purchase, but noted in a statement that it had negotiated a deal lower than the listed price tag. 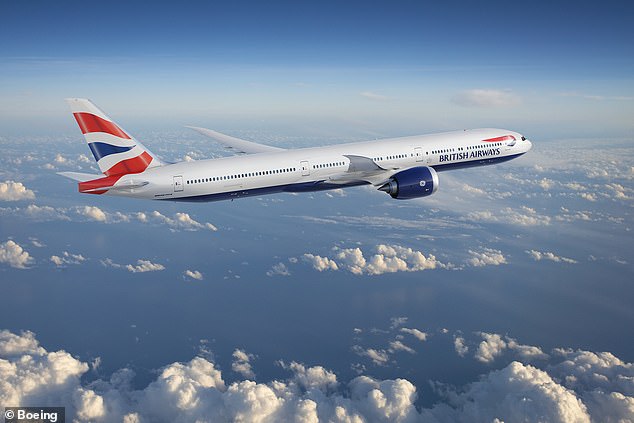 British Airways has made a multi-billion pound order for up to 42 Boeing 777 jets it has been announced. Pictured is an artist’s impression of a new BA 777-9

‘It’s the ideal replacement for the (Boeing) 747 and its size and range will be an excellent fit for the airline’s existing network,’ Walsh added.

Earlier this month, Airbus said it would stop building the A380 superjumbo, its competitor to the ageing 747.

Prior to Airbus’ announcement, Walsh had said that IAG was ‘very pleased’ with the 12 A380s operated by BA and called it an ‘excellent’ aircraft.

However, Walsh had criticised the high cost of the A380, pointing to the ‘great competition’ currently existing between aircraft manufacturers.

Kevin McAllister, president and CEO of Boeing Commercial Airplanes, added: ‘The 777-9, in particular, simply has no competitor in its class when it comes to efficiency and performance. 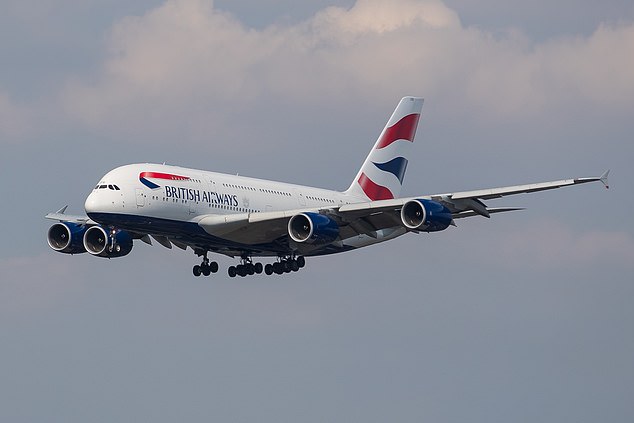 The decision to buy the new aircraft comes weeks after Airbus announced it is pulling the plug on the Airbus A380. Pictured is one of the 12 A380s currently in the BA fleet

‘It is the right-sized airplane for British Airways to efficiently serve long-range routes with heavy passenger demand.’

Industry sources said Airbus had been offering a combination of its A350 twin-engined long-range jet and the four-engined A380.

Meanwhile, separately, UK engineering group Rolls-Royce said it dived into a net loss last year as its Trent jet engines were hit by costly repairs – as well as the decision by Airbus to pull the plug on the A380.

Rolls posted an annual loss after tax of £2.4 billion ($3.2 billion) in 2018 that followed a net profit of nearly £3.4 billion a year earlier, as the group also decided to axe thousands of jobs as part of vast restructuring at the group.

The British company also said it no longer wished to be a candidate to make the engine for a new midsize passenger jet proposed by Boeing.

‘Rolls-Royce has decided to withdraw from the current competition to power Boeing’s proposed middle of the market – or New Midsize Airplane (NMA) – platform,’ Rolls said in a statement. 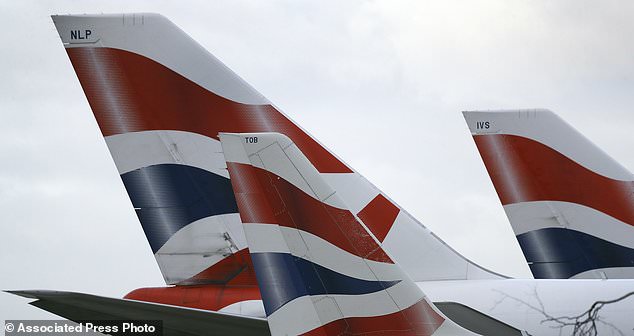 ‘While we believe the platform complements Boeing’s existing product range, we are unable to commit to the proposed timetable to ensure we have a sufficiently mature product which supports Boeing’s ambition for the aircraft and satisfies our own internal requirements for technical maturity at entry into service.’

Chicago-based Boeing is looking at building an NMA, or single-aisle commercial jet for long-haul journeys, to fill a gap in the market – but concrete plans have yet to be announced.

On Thursday, Rolls said that costs linked to problems with its Trent 1000 engine that powers the Boeing Dreamliner stood at a higher-than-expected £790 million in 2018.

The Trent 1000 has seen some parts wear quicker than expected, forcing Rolls to carry out expensive repairs.

It added that last year’s earnings were hit by an additional £186 million ‘following Airbus’ decision to close the A380 production line’.

Fredo Pies the best pie shop in NSW, according to Melissa Leong

Accor set to turn it on during Vivid Sydney ·

Conrad Washington, DC, on sale ahead of February opening