My way or the highway: All the tricks to guarantee your kicks on the iconic Route 66 across America

If you ever plan to travel west in the US, take the highway that’s the best, the so-called Mother Road that winds west from Chicago to the Pacific coastal city of Santa Monica. That’s a 2,500-mile journey crossing eight states and three time zones.

Given its scale – and expense – it’s not an odyssey you do on a whim. My excuse was our 30th wedding anniversary and a pent-up desire, with our three sons having flown the nest, to do more than two weeks poolside.

My knowledge of the road extended only as far as Bobby Troup’s hit song (You Get Your Kicks On) Route 66, and Cars, the Pixar movie, so Nicola and I put our holiday in the hands of Freedom America (‘No.1 for America holidays’), choosing its self-drive Route 66 package of return fights, accommodation and hire car. 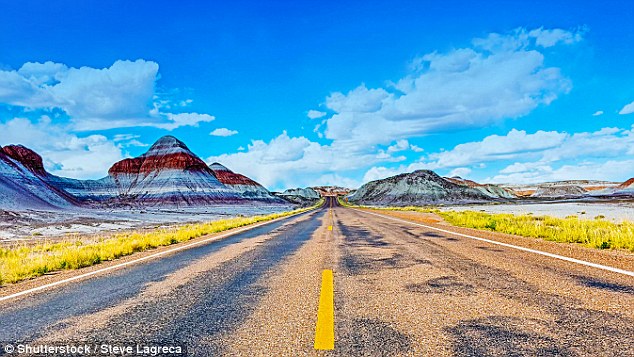 Mesmerising: Route 66 passes through the The Petrified Forest National Park in Arizona

With detours, we then clocked up 3,000 miles, stayed in 12 motels and hotels (the distinction is important) and created memories which will stay with us for years.

As the song says, you get your kicks on Route 66 and we had kicks aplenty – only some of them were on the shins, too. Here’s what we learned about the iconic route – and how you can avoid getting bruised on your drive of a lifetime.

History of the famous road

The road’s origins date back to 1893 and the foundation of America’s National Good Roads Association. The plan for the route was set out in 1925 and it was named Route 66 the following year. It wasn’t until 1937 that all the road was surfaced. After the war, the booming economy saw thousands of tourists take to Route 66 on two-week vacations. Growing demand for higher-quality roads meant that, by the mid 1970s, the new interstate highways had replaced large sections of the old road. In 1985, Route 66 ceased to be a federal highway. 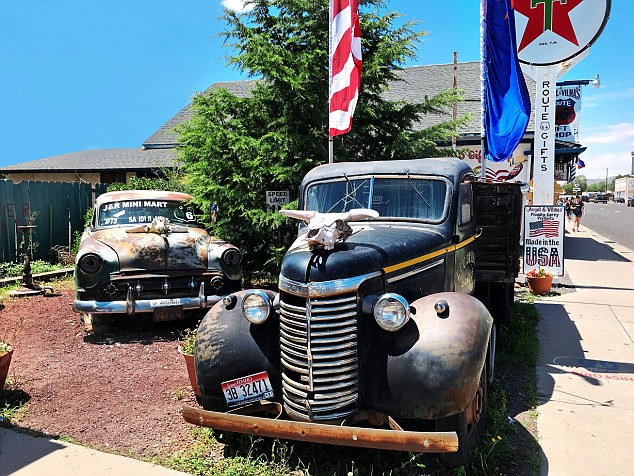 Vintage view: Old cars outside a store in the Route 66 town of Seligman (above)

Compare prices, itineraries and the tour company’s knowledge of the original route. While operators happily talk about creating a ‘travel itinerary’, the reality is you’re likely to be directed along the interstate highways to a series of predictable destinations. Ask them to create an itinerary based on the original route, with overnight stops at less familiar but more characterful points.

Packed with stories, places to see and route guidance, Travel Route 66, by Jim Hinckley (Voyageur Press), was an invaluable crammer and an essential guide during it.

Route 66 evolved over many decades, acquiring new sections as circumstances dictated. As a result there are a confusing number of so-called alignments that you can follow. Meanwhile, some sections of the road unexpectedly culminate in a No Entry sign. Fortunately, these tend to be short, so retracing your steps isn’t too tiresome.

A map of the entire route, which crosses eight states and three time zones

YOUR ROUTE 66 PLAYLIST: TOP SONGS FOR THE TRIP

Definitive US road song with a twist of British eccentricity.

The king of the road track.

The Beatles: Back In The USSR

You could insert the Beach Boys here – or you could play Paul McCartney’s parody of them instead.

Talking Heads: Road To Nowhere A phenomenal band at their most exuberant. The lyrics, written in 1985, are all too relevant today.

Of all the Boss’s car-related tunes, this is the most fun. 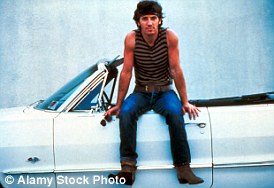 Anthem so breezy that, even if you’re in an M25 tailback, you’ll still feel the wind in your hair.

Remember, touring Route 66 over 15 days with breaks in between means you’re often driving more than 250 miles each day, and occasionally more than 300. We wanted to drive the original road so at the start of each day we identified where to join Route 66 on Google Maps on our phones. Then, to ensure we didn’t stray too far off, we’d input the address of our next hotel. Ignoring Google’s instructions to rejoin the interstate highways (occasionally, it guided us along the old road until it could send us to the highway), Nicola would follow the old road on the map, calling out directions. And beware, not all states display Route 66 roadside markers.

Top-up to keep in touch

To extend our two Vodafone call plans (to 4GB monthly data allowance, and unlimited calls and texts) cost us a total of £12 a day. This allowed us to stay in touch with friends and family, and to run Google Maps without worrying about the cost. In the event, using Google Maps consumed just 100mb of data each day. By the end of the month during which we travelled, our typical £72 monthly phone bill for the two phones had hit £262.

Cash in with cheap gas

You can save money by hiring a smaller vehicle but, if you want to drink in the views, an SUV such as a Jeep Cherokee is the perfect choice. Fortunately, the price of fuel in the US (its cost varies from £2 per gallon – about 53p a litre – in the east to around £3.25 in the west) meant that although we averaged just 29mpg over 3,000 miles, the fuel bill came to just £225. The sting in the tail was the one-way surcharge Hertz imposes on cars collected at one location and returned to another.

For our Cherokee, Hertz demanded £760. Check if a similar charge is applied to the tour or rental deal you’re considering. Some operators, such as Complete North America, don’t impose it.

Meanwhile, our rental package came with extras essential for any Route 66 trip, including unlimited mileage, roadside assistance, loss damage waiver (additional cover that absolves you of financial responsibility for any loss or damage to the vehicle) and state taxes.

After a day’s driving it is good to arrive at a hotel in the town centre where you can explore, stretch your legs and enjoy dinner.

Unfortunately, to keep the cost of the holiday down, travel companies are more likely to put you up in two-star, budget motels for the majority of your trip, reserving three-star hotels for two-night stays at the beginning and end of it.

Such was the case with Freedom America – and the experience wasn’t entirely pleasurable.

For example, immediately on arrival at the Fairfield Inn – our intended home in a run-down, out-of-town district of Albuquerque for two nights – gun shots from a passing car rang out as it sped along the adjacent and very noisy interstate highway that backed on to the car park. Our room was dingy, dirty, and smelt of cigarettes. We fled and treated ourselves to two nights at the modest but infinitely superior DoubleTree in Downtown Albuquerque, at a cost of £175.

Two days before we’d fled in similar fashion from the Days Inn outside Oklahoma City, swapping it for the smart AC Hotel in Bricktown, Oklahoma City (£128) and the following day, from the Red Roof Inn at Amarillo, decamping to the Embassy-Suites hotel in Downtown Amarillo (£138).

Fearing how bad our motel might be at the end of each day caused Nicola, in particular, much anxiety.

Rival company American Sky offers both standard (motels) and superior (hotels) rooms on its Route 66 tour. The upgrade to hotel accommodation adds only about £250 to the cost of the holiday. It’s a price well worth paying. 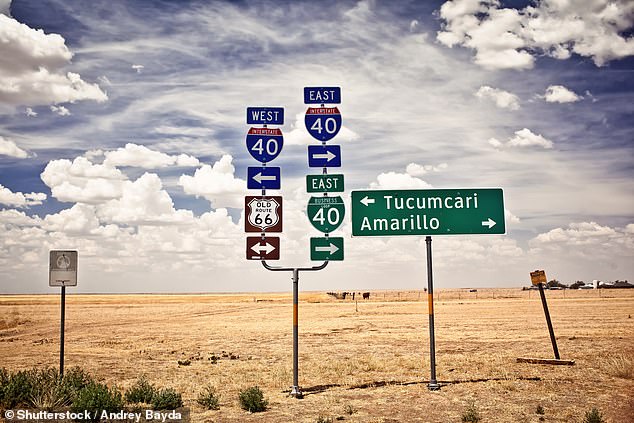 Rev up your holiday: A Route 66 intersection sign in Adrian, Texas

Alternatively, check out specialist Route 66 websites such as driving route66.com packed with recommended motels, including refurbished gems on the old road.

There are times when you’ve no choice but to follow the interstate highways for brief stretches until Route 66 shrugs them off and goes its own way. Where it leaves the I-40 at exit 139 after Ash Fork in Arizona, home to Zettlers Store (‘serving routers since 1929’), is one such moment.

Take it and you’re rewarded with not only the longest, uninterrupted section of the old road but also its most memorable.

Smooth and quiet, a lot of the time it rolls straight and level through the vast, green-blue expanse around and above it.

You pass through the old Route 66 town of Seligman first where, if you can beat off the other pilgrims there, you can meet town barber Angel Delgadillo, co-founder, in 1980, of the Arizona Route 66 Association and dubbed the guardian angel of the route.

And then it’s onwards, the grass turning to desert rock, through Crozier Canyon to the Hualapai Valley, marked by the Hackberry General Store. Crouched against the hillside, it’s a Route 66 gift shop and experience in one.

If, like us, you’re lucky to catch the blues busker strumming in the shade against a backdrop of rusting automobiles, you’ll swear even the shabbiest Days Inn motel was worth it for this one moment.

From there, it’s onwards to Kingman to see the magnificent, refurbished El Trovatore motel.

We booked our self-drive tour through Freedom America (freedomamerica.co.uk). Others include: American Sky (americansky.co.uk) which offers a 15-night tour from £1,559pp (departing October) with choice of standard or superior accommodation; Virgin Holidays (virginholidays.co.uk) offers a 17-day tour from £950pp in January 2019; Audley Travel (audleytravel.co.uk) has a choice of 15-day and 26-day tours from £2,305pp and Kuoni Travel (kuoni.co.uk) offers a mix of three-star hotels and motels on a 18-day tour from £3,931pp.

Singapore Airlines and Amadeus are working together ·