Airship kitted out like a five-star hotel will soon carry passengers to the NORTH POLE for £50,000 each (despite the prototype collapsing)

Adventurous millionaires can now book tickets to the North Pole on an airship – for around £50,000 each.

The aircraft being used for the remarkable 36-hour journey is the world’s longest, the Airlander 10, which is being built in Bedfordshire in the UK. The prototype hit the headlines in 2017 when it collapsed.

The cabin of the 92-metre-long (300ft) Airlander 10 will be furnished as a flying five-star hotel, with panoramic windows and spacious cabins. 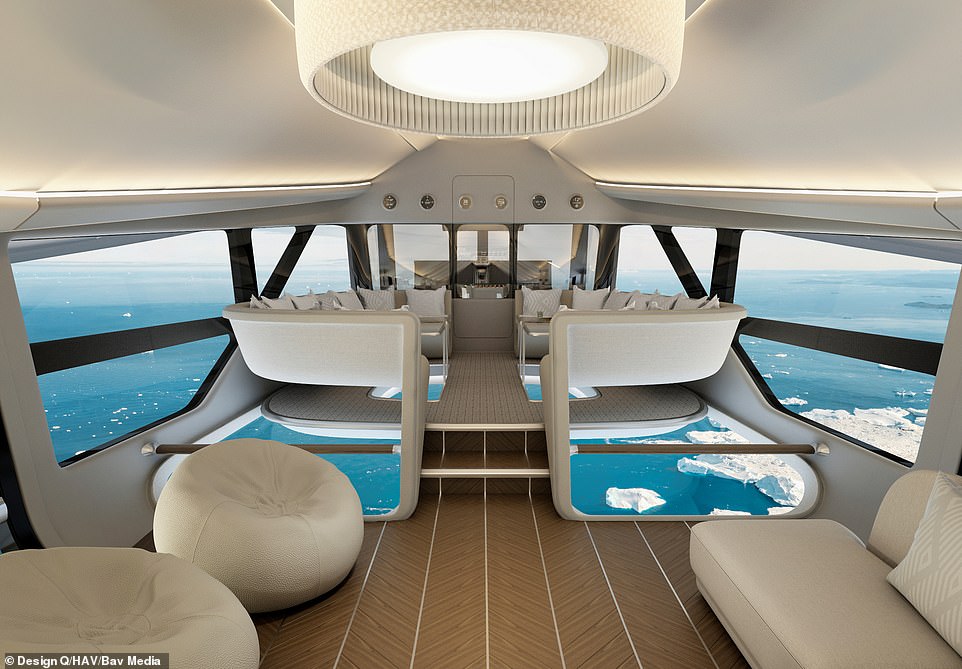 The Airlander 10 will be furnished as a flying five-star hotel, with panoramic windows for unparalleled views of the Arctic 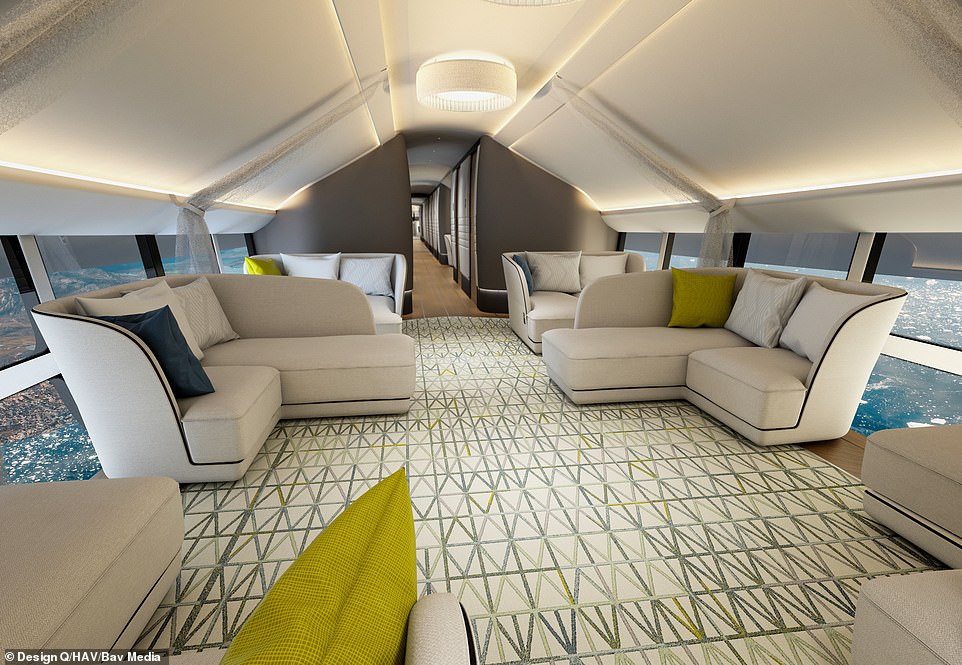 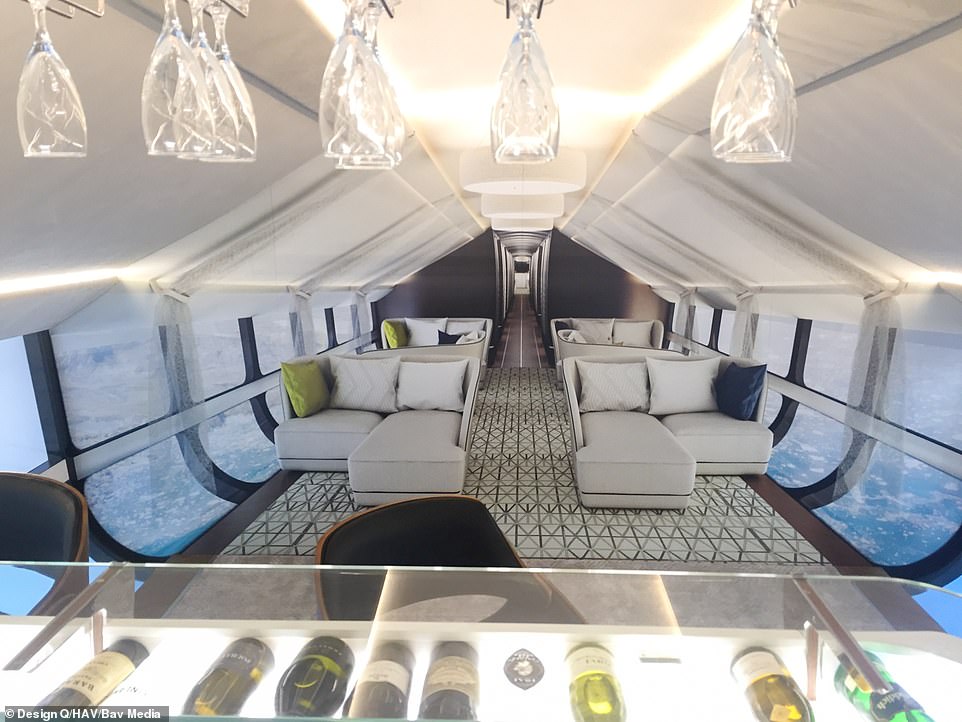 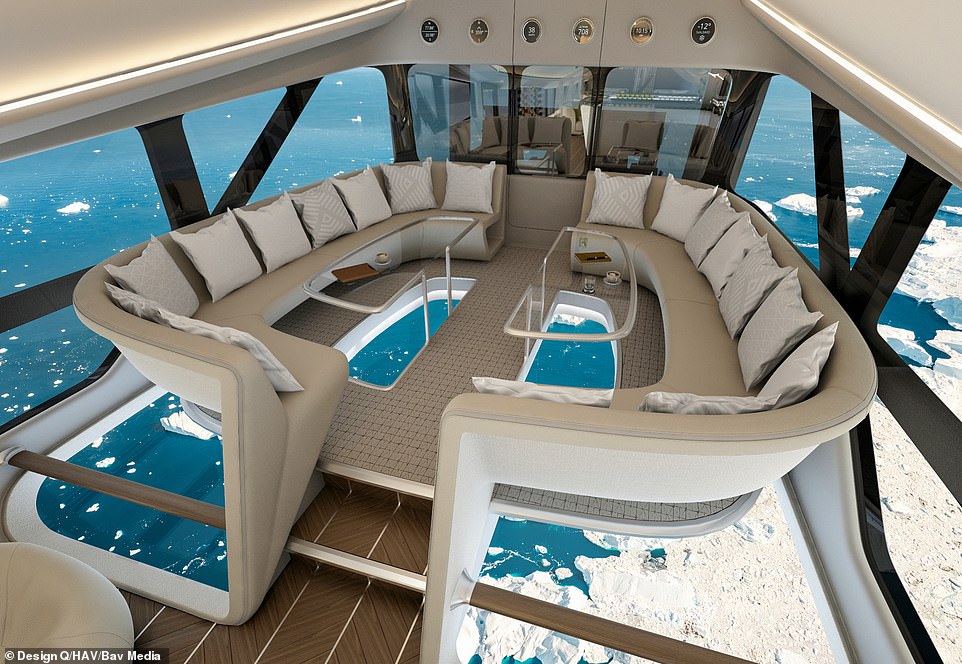 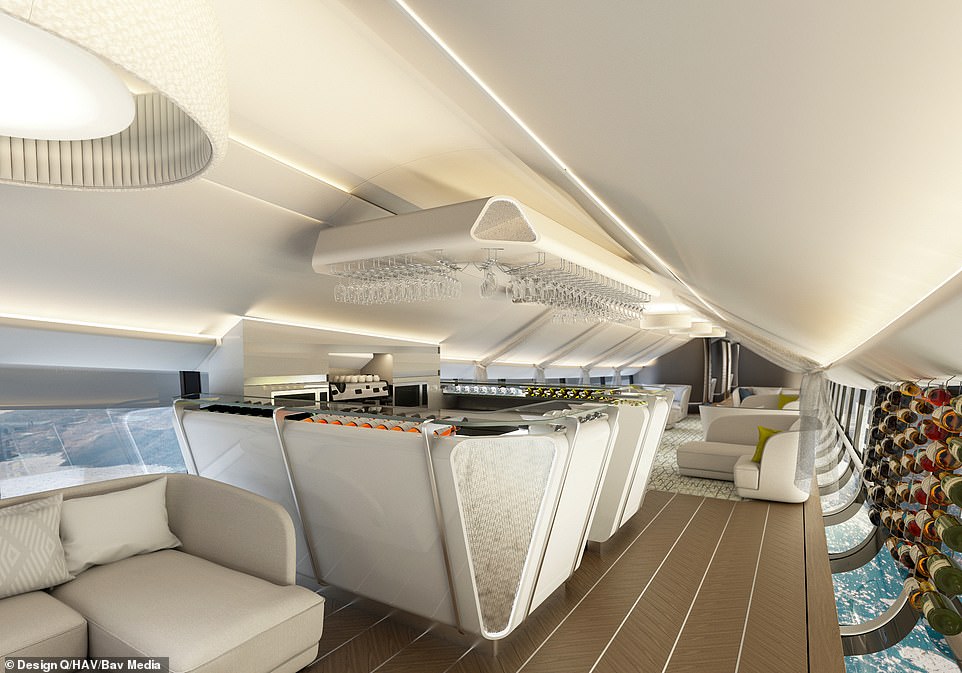 Carl-Oscar Lawaczeck, CEO and founder of OceanSky, said: ‘The expedition to the North Pole is for the traveller who wants to experience the Arctic in a unique way, and at the same time contribute to the development of sustainable travel’ 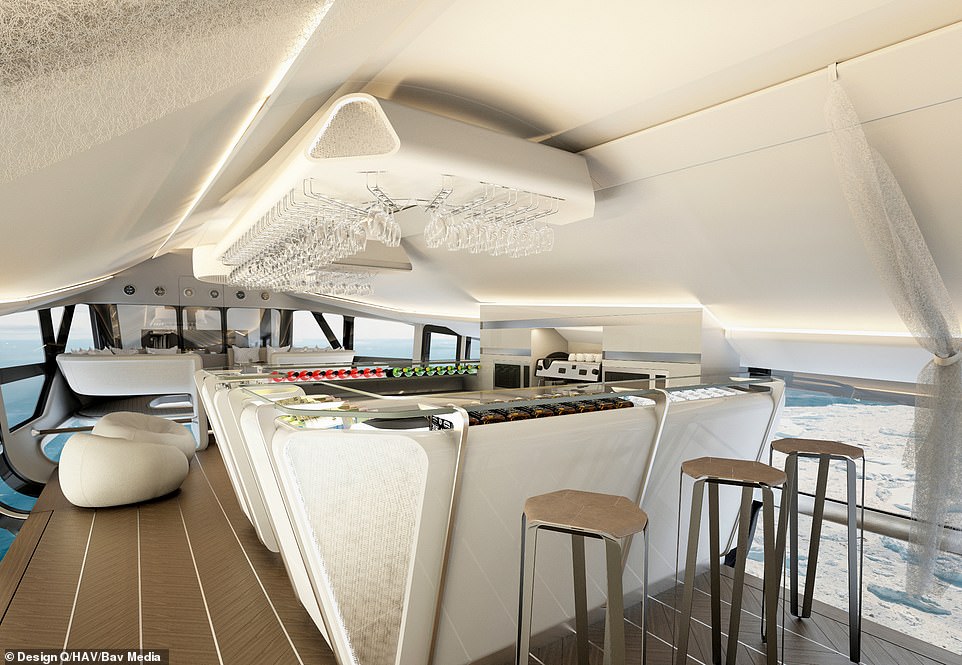 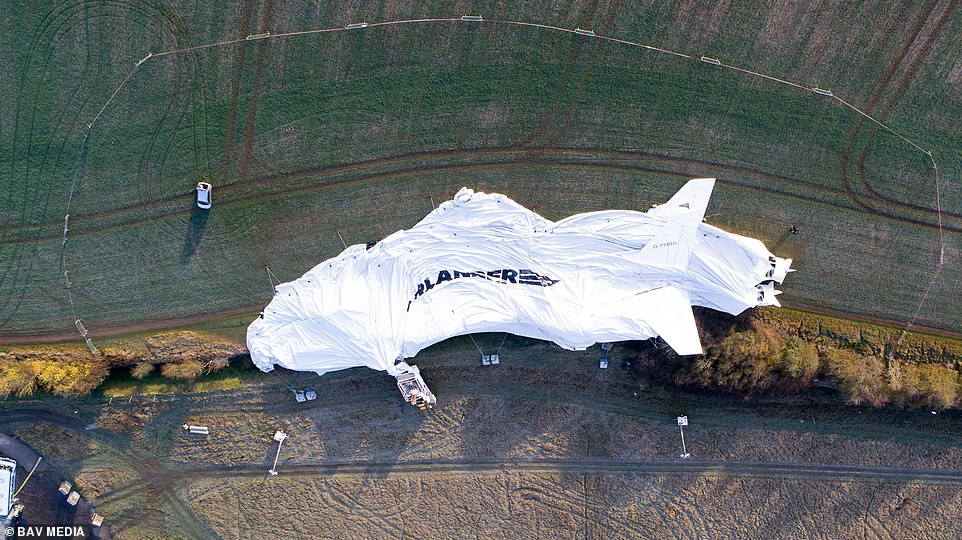 The airship will take off from Longyearbyen in Svalbard and fly passengers to the North Pole where they will experience a day excursion on the Arctic plains. Flights are expected to start in 2023.

Carl-Oscar Lawaczeck, CEO and founder of OceanSky, the Swedish company behind the venture, said: ‘The expedition to the North Pole is for the traveller who wants to experience the Arctic in a unique way, and at the same time contribute to the development of sustainable travel.

‘After landing, the passengers will experience a day excursion on the Arctic plains. Some of the expeditions in the first season will be guided by acclaimed Arctic expert and climate activist Robert Swan.

‘This is a historic endeavour. Never in history has an airship landed on the North Pole. Roald Amundsen flew from Svalbard and over the North Pole in 1926 with the airship Norge. 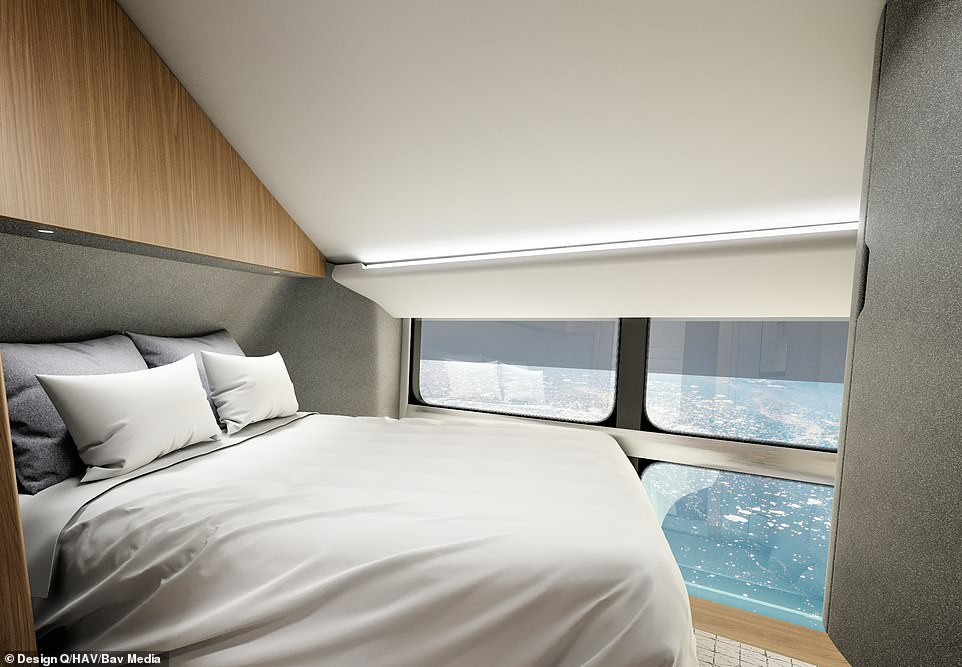 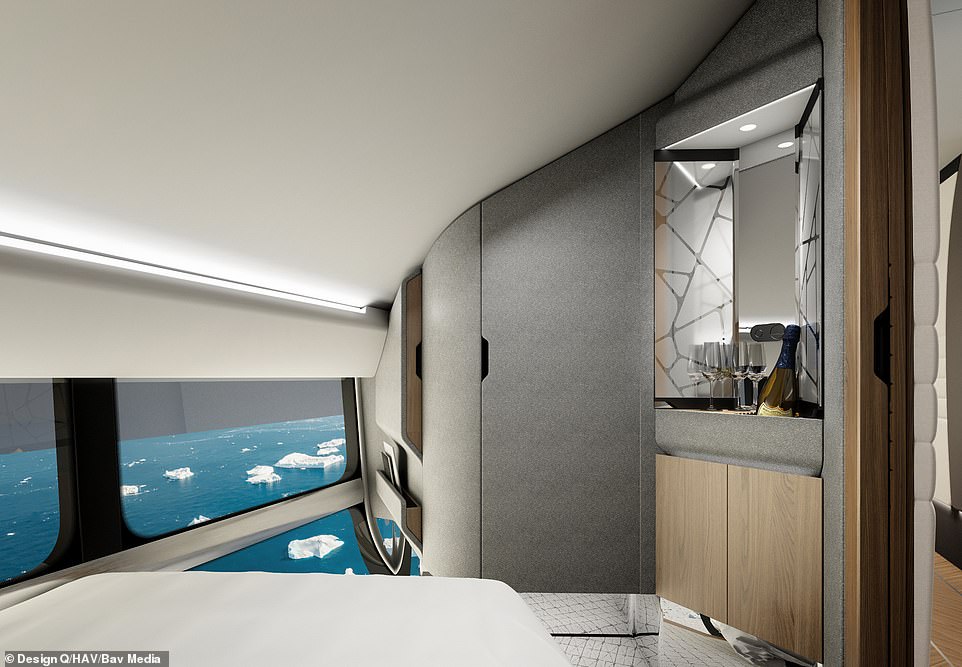 Room with a view: Travellers on board the Airlander 10 will be able to watch the Arctic landscape from the comfort of their beds

‘Now we are doing the same expedition, but we will also land on the North Pole. The passengers will enjoy the Arctic nature in serenity and comfort in a hyper-efficient modern flying vehicle. They will be pioneering a new way to travel, flying for sustainable skies.’

The Airlander 10 is a hybrid aircraft, combining buoyant lift from helium with aerodynamic lift created by the shape of its hull.

The vehicle is driven forward by four propellers and can fly continuously for days at a maximum speed of 92mph. It is being developed by the British company Hybrid Air Vehicles.

The cabin is not pressurized, which means that the environment will be quiet and passengers will be able to open the windows.

On the flight to the North Pole, the 16 passengers will be served an Arctic-inspired menu prepared on board by an award-winning chef. The price for a private two-bed cabin is 600,000 SEK – almost £50,000.

The overnight trip is 15 hours each way, with six hours on the ground, including lunch in the snow. 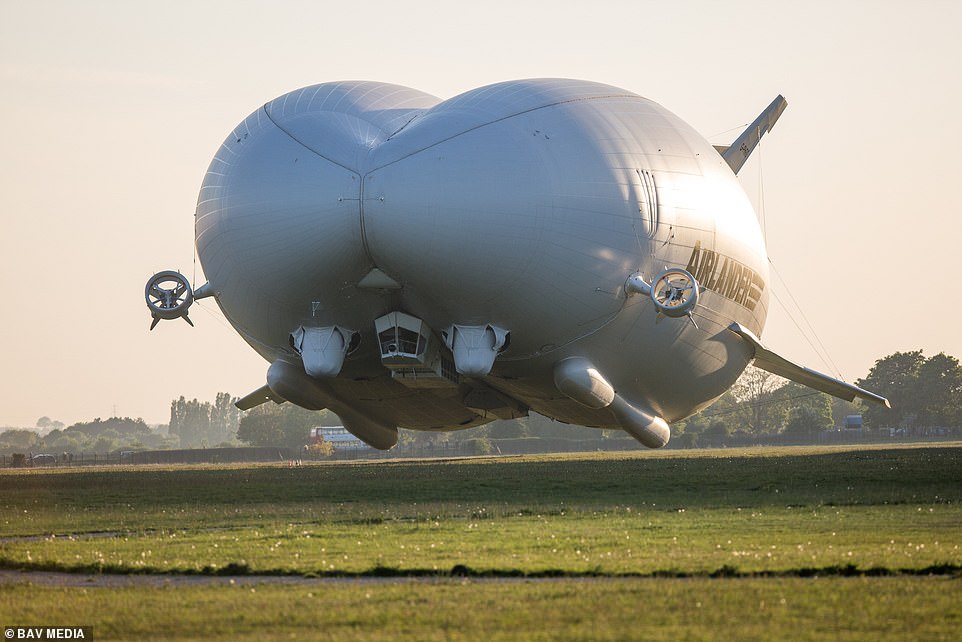 The cabin is not pressurized, which means that the environment will be quiet and passengers will be able to open the windows. Flights are expected to start in 2023. Pictured is the prototype in 2017 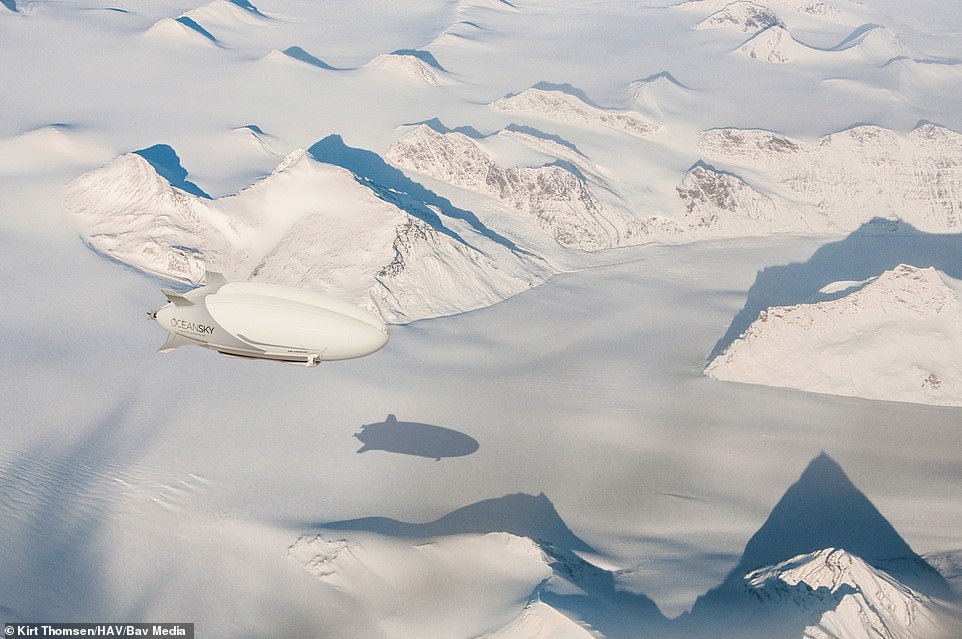 The Airlander 10 has been under development by Hybrid Air Vehicles at Cardington in Bedfordshire over the past 12 years and has cost £25 million to build.

It is almost 30ft longer than the massive cargo-carrying Antonov An-225, which until now was the longest aircraft ever built and two-and-a-half times longer than the distance covered by the Wright brothers’ first powered flight.

The aircraft needs 1.3m cubic feet of helium – enough to fill 15 Olympic-sized swimming pools – to get off the ground.

In November 2017 the prototype detached from its moorings after a test flight and collapsed after a locking mechanism was not inserted correctly.

An investigation by Hybrid Air Vehicles said the root cause of the incident was a ‘failure to correctly secure the locking mechanism between the aircraft and its mooring mast’.

The Airlander detached from its mooring mast on the morning of November 18 and this triggered the in-built hull deflation mechanism, which operated until it came to rest on the airfield’s perimeter fencing.

Rosewood to operate the Bauer Hotel in Venice: Travel Weekly

10 of the best live music pubs in the UK: readers’ travel tips